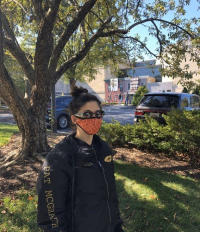 I think my degrees in art history and cultural studies make me qualified to be the "curator" of a collection of cosmetics with unique designs and packaging as well as cultural significance. My goal is to have people see makeup items and application beyond their utilitarian purpose, to learn about the art, design, and history behind them. What Valerie Steele did for fashion, I want to do for makeup: make it a legitimate field of study and ensure there's a place for it in museums and academia. I am committed to preserving the history of cosmetics, telling the story of makeup and its impact on society through objects, styles and ads. Specialties include '90s/Y2k makeup and the link between fine art, art history and makeup. Above all, I strive for for the Museum to be an agent of change within the cosmetics industry and beyond through analyzing both makeup history and contemporary beauty culture. 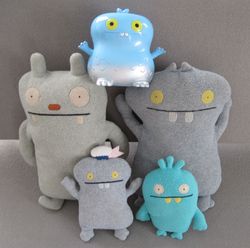 The Advisory Committee has been around since the Museum's earliest days, although some of the members have been changed.  It consists mostly of Babos, but since they get distracted by talking about cookies instead of new acquisitions, Jeero is there to keep them on task. Original Babo (a.k.a. the Grand Poobah since he was the first Babo hired by the Museum) serves as Committee Chair. 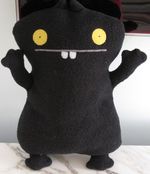 There's nothing stealthier than a ninja, and Secret Mission Babo can move objects out of storage to the display shelves and back like nobody's business.  Sometimes he can't figure out where he is if he ends up on a solid black background (like a black shirt) but usually he's pretty sharp. 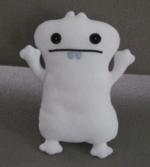 Since he is the same color as many Apple products and about the size of an iPhone (he's mini!) we figured he might know what he's doing in terms of the latest blog technology and social media. Okay, so his only technological skill is how to look up cookie recipes online, but maybe eventually he'll get better.

His grey wings allow him to get to meetings and press events easily and he can hypnotize anyone with his crazy different-colored eyes, making Yoyamart Babo a star at schmoozing and creating good PR for the museum.

Poe is similar to Icebat in that he comes from a cave and enjoys ice cream, but he's a bit lazier.  His small stature and miniature wings allow him to be gentle and meticulous with the Museum's objects, making him an excellent conservator. 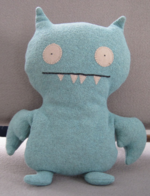 When he's not flagging down ice cream trucks or concocting new recipes for our ice cream maker, Icebat tries to raise some moolah for the Museum.  He's not very successful because whenever he meets with funders he insists that they turn up the air conditioning and turn off the lights to create cave-like conditions, but he does try. 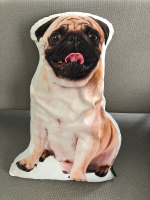 Barney is essentially a Babo in dog form (pugs are apparently not that bright but very loving) so we had no choice but to hire him.  Follow his little curly tail around the Museum as he barks out the background of some of the key pieces.

He's little, but he has big dreams.  In addition to cookies, this Babo dreams about exciting new educational programs that will fully engage and enthrall Museum visitors. 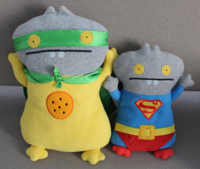 This super hero duo helps the curator to envision awesomely designed exhibitions, thereby making sure the makeup reaches its full potential in wowing visitors.   And their capes allow them to fly so they can easily scout cool new exhibition spaces.  Power Babo and Super Babo:  saving the world from boring exhibitions, one display at a time! 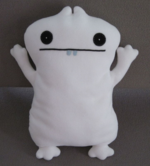 Ice Lodge Babo is the Museum's expert on all things legal.  He tries to work with Icebat on money matters but the two of them usually just end up hunting for ice cream. 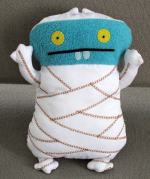 If you want some really cool souvenirs to commemorate your visit to the Makeup Museum, Mummy Babo has you covered.  He really prefers Halloween stores to the Museum's shop, but he'll still help you out. 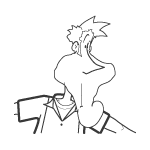 With nearly 20 years of experience and his own successful business, Glenn is more than capable of handling all the Museum's design needs.  He enjoys sandwiches, the color blue and doing MM work  for free spending time with his lovely wife Hillary. 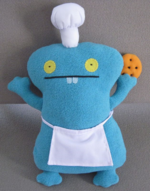 When he's not making treats for the rest of the Museum staff, Cookie Chef Babo creates delicious cookies and other sweets at the Museum's cafe. 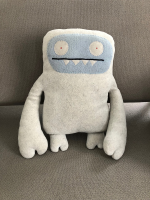 If Museum employees get too out of control we can rely on Yeti to handle things and make sure they stop getting into mischief by enveloping them in one of his trademark "bear hugs".  Just looking at those big powerful arms is usually enough to prevent other staff from acting up!

Babo Bear is very special, since he's a Babo AND a bear.  Actually he's just a little cub, so because he's only a baby we don't want him doing any real work and thus, he is an intern.  He mostly hangs out and eats honey. 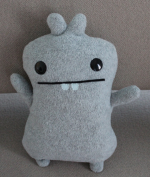 Like Babo Bear, Origins Babo is just a baby - he's so little he hasn't even fully grown his webby paws!  In light of that we decided he should also be an intern as he's not ready for any real work yet. 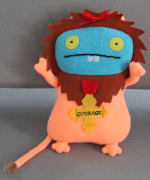 We'd be "lion" if we said this little guy wasn't great at encouraging visitors to get memberships and keeping track of all of the Museum's members.  Then again, as we don't have any right now, it's not that hard of a job - perfect for someone who might lack the courage to deal with strangers. 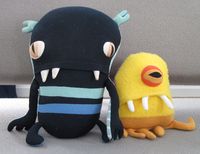 We found Zeke and Dot at the Charm City Craft Mafia's Pile of Craft show a few years ago, courtesy of Cotton Monster.  They can keep track of all the Museum's objects very easily due through the magical powers of their stripes (in the case of Zeke) and dots (in the case of Dot - she has black polka dots all over her back.) 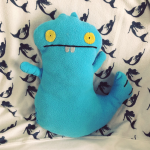 A rare catch indeed, Mer-Babo's curiosity about life on land makes him a natural for research assistance.  While he's usually splashing around in the tub, occasionally he'll help the curator with her research on various Museum objects. 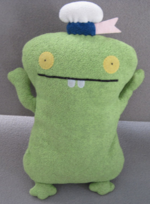 Seasick Babo was originally hired to be the senior conservationist, but he kept puking on the Museum's objects so we had to put him in charge of photography rights.  Poor little guy.  He is easily distracted by cookies and boats, but he does appreciate the shiny, sparkly objects in the collection. 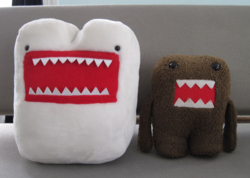 While Kingsley doesn't have any limbs, his big teeth are enough to scare away any potential art thief. And Domo can be pretty ferocious. Should you visit the Museum, remember to take the flash off your camera or else you will get quite the growl from Domo!

He primarily uses his math skills to count cookies, but Mathlete Babo isn't bad at crunching numbers either.  The only problem is that he's always pushing for a higher portion of the Museum's budget to go to cookies rather than makeup.

Need a museum map?  Not sure where the bathrooms are?  Space Babo can help you with all questions upon your arrival at the Makeup Museum.  Well...he might not since he's a little spacey, reminiscing about the times he's circled the earth and how tricky it is to munch on cookies in zero gravity.  Nevertheless, if you manage to get his attention he will help you as best he can.