Consumers have come to expect a good measure of dishonesty in makeup marketing. But given the lack of strict regulations for cosmetics labeling in the U.S. ("clean" beauty, anyone?), companies have considerably more freedom to concoct some rather outlandish claims, especially nearly 90 years ago. Case in point: Woodbury's germ-free face powder and germ-proof lipstick and blush.1 In 1933 Woodbury introduced two creams they advertised as germ-free, asserting that their special formula contained a "self-purifying ingredient" that totally inhibited the growth of harmful bacteria even after use: "The last fingertip of Woodbury's Cold Cream is as sterile and free from germ growth as the first." 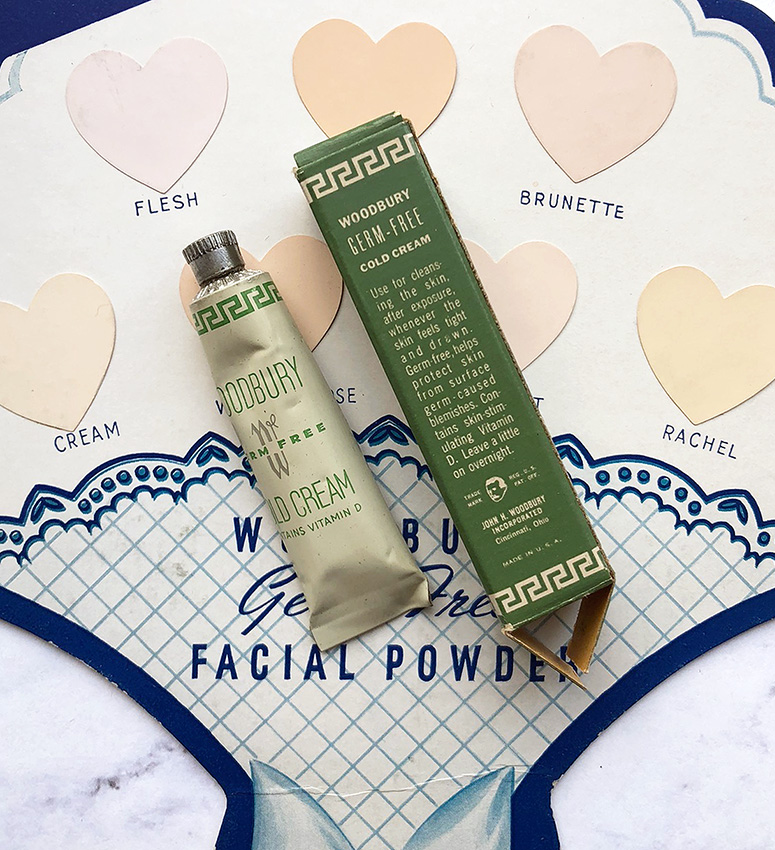 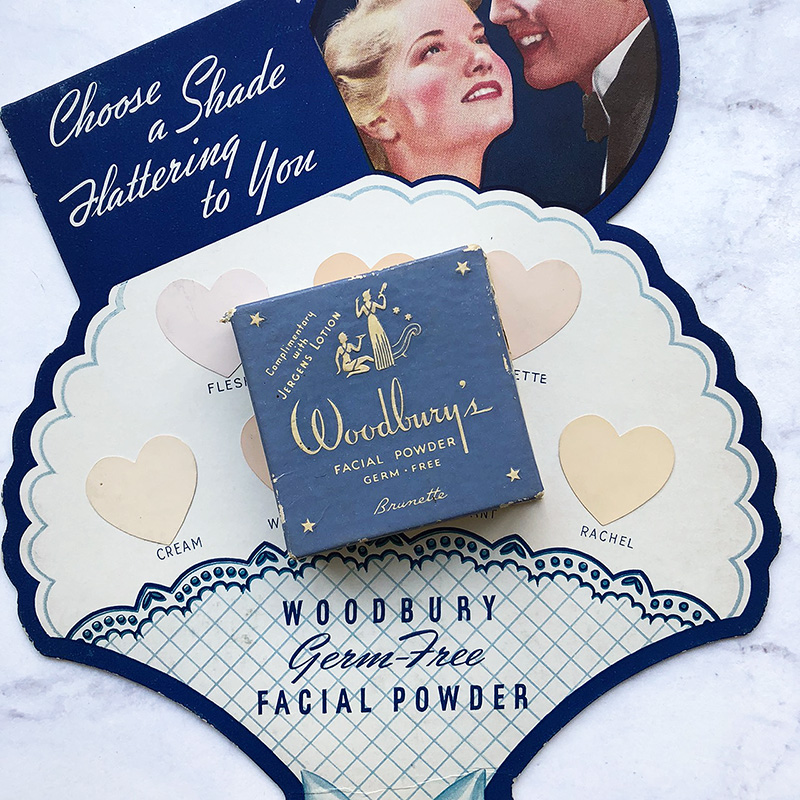 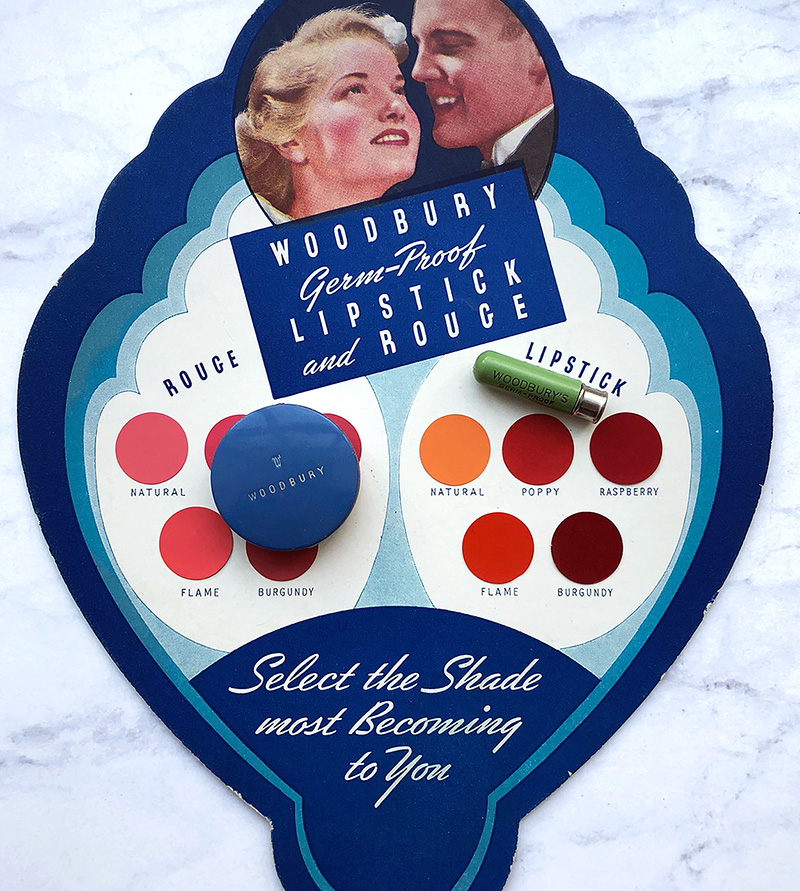 The faux science in the ads is absolutely mind-boggling, and there's a lot to unpack: the agar plates, the completely made-up Element 576 and the emphasis on germs not causing illness but bad skin.2 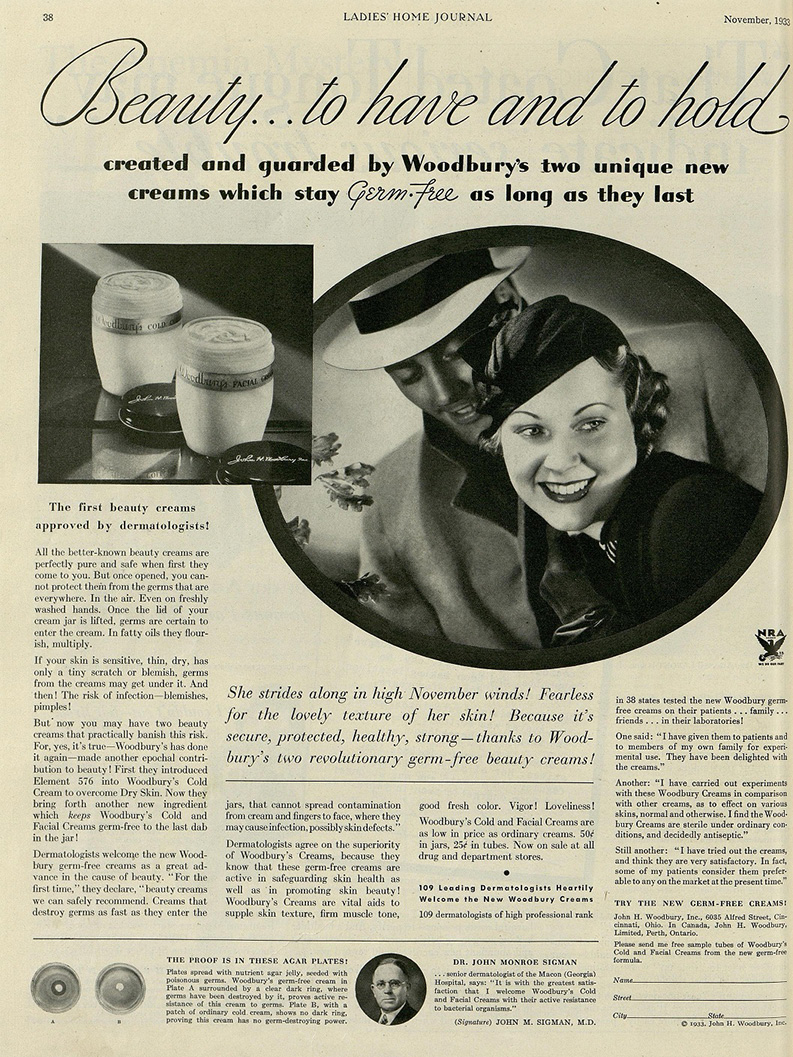 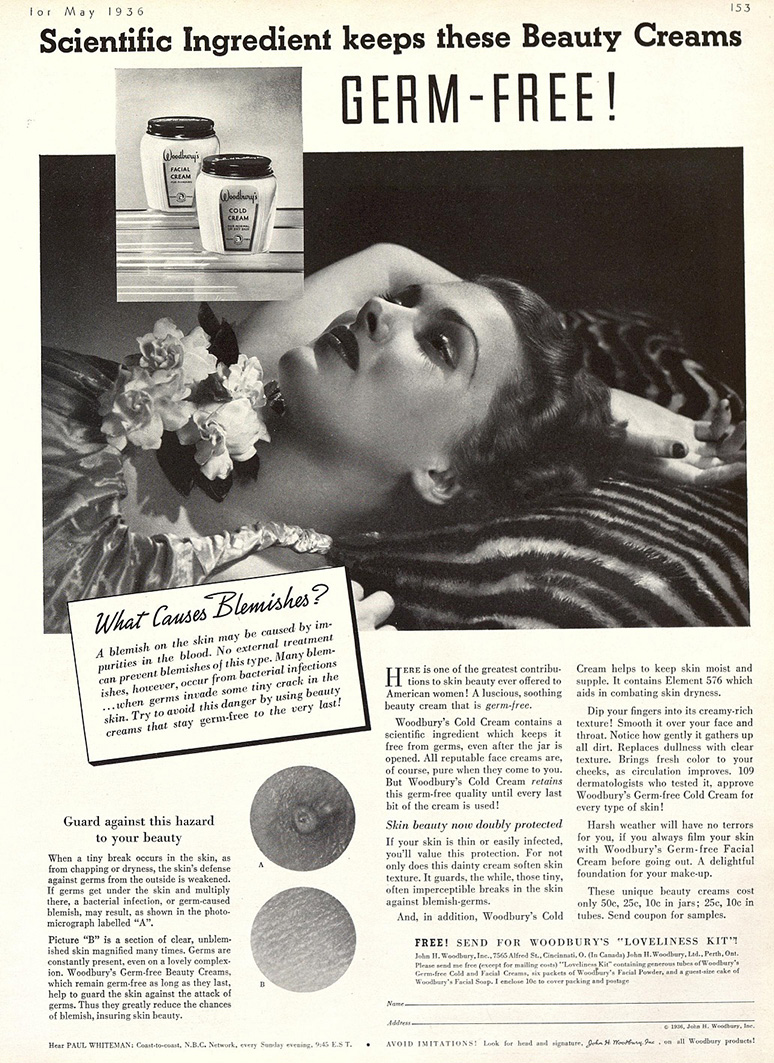 The mummy references are particularly fascinating, especially in the context of other brands that extensively appropriated Egyptian imagery in the name of beauty. Explains Advertising Age: "The illustration used is full of significance. In the background is a photograph of the head of the wooden casket used by ancient Egyptians to enclose mummies. To get the picture, it was necessary to make an exact copy of a New York museum piece...one of the problems was to give the illustration high character. The mummy has a classic connotation [that] suggests the historic beauty of the Egyptians and carries a desert-dry inference on age. Possibility of achieving similar results with a mask treatment was rejected because of frequent use of the idea in recent years."3 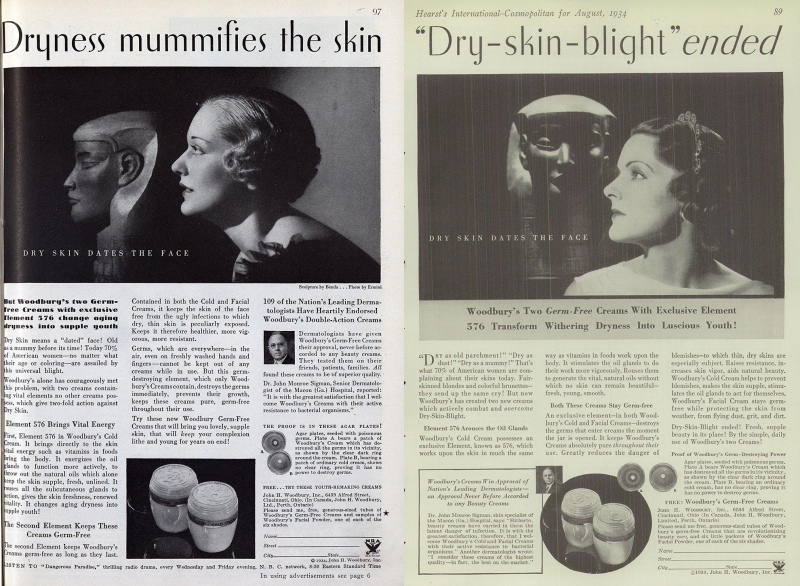 While the "historic" beauty of ancient Egyptians is acknowledged in Woodbury's ads, an image of a mummy is used to indicate an undesirable cosmetic trait. If Cleopatra and Nefertiti were represented as beauty icons, the mummy represents ugliness - essentially the opposite of most Egyptian-themed makeup advertising.

Another interesting aspect of Woodbury's marketing of the germ-free line was the inclusion of quotes from a real dermatologist. Many figures used in makeup ads were complete works of fiction, but there was in fact a Dr. John Monroe Sigman and he was indeed a Georgia-based dermatologist. Whether Woodbury got permission to use his name on their germ-free ads is unclear. Most likely they didn't, but the fact that they used an actual, existing dermatologist is a step up from entirely imaginary people like Dr. Charles4 or grossly misrepresented real women such as Mamie Hightower.  Anyway, a few years later Woodbury expanded the idea from skincare to makeup. As we know, it's impossible to keep makeup entirely "germ-proof"; it can be sanitized, but the claim that any cosmetic will remain totally free of germs once it's been used is obviously quite the fabrication. 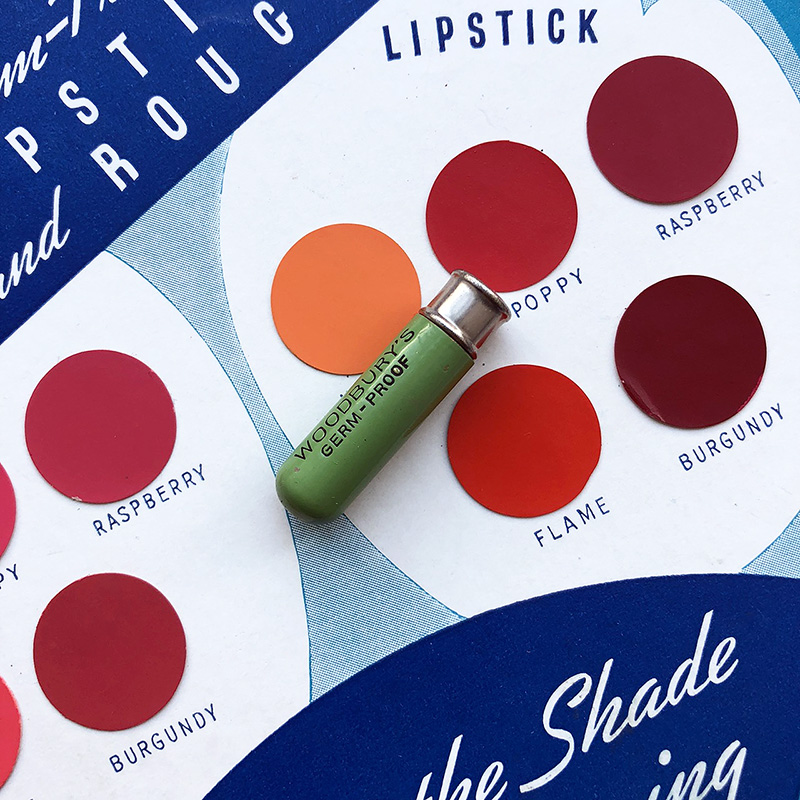 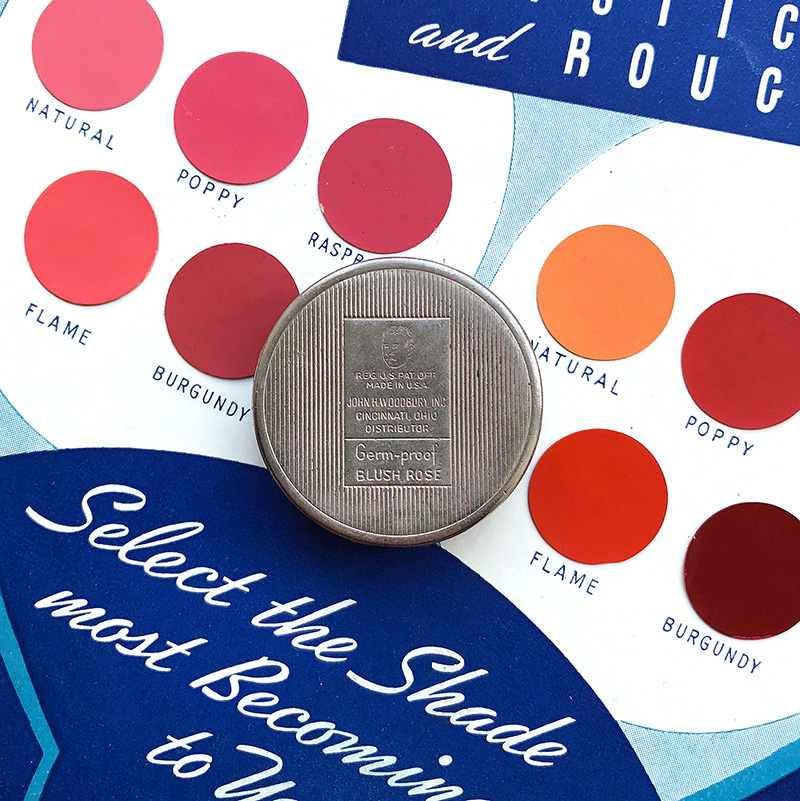 One of the things I was trying to figure out is why Woodbury introduced the germ-free line at this moment in time. There was some hand-wringing about makeup being unsanitary and able to transmit dangerous infections, which may have simply been part and parcel of the general dislike of makeup in the early days of the industry, but common advice to avoid breakouts or infections even by the beginning of the 1930s was the same as today: don't share your makeup, wash your hands thoroughly before handling skincare/makeup (or use a clean brush/other tool) and be sure to remove your makeup daily.5 It appears that the germ-free line was just another marketing tactic to try to set Woodbury's products apart using the latest spin on science-backed cosmetics. Then again, though Woodbury's ads tied germs to unsightly skin issues rather than illness and the flu epidemic of 1918 was long over, the public may have been generally more fearful of germs given their knowledge of how diseases were spread and that vaccinations available today were still decades away in the early 1930s. (Think about it: the moment COVID was declared a pandemic came a tidal wave of articles on whether the virus could live on makeup.) And as historian Shiho Imai points out, certain populations, particularly the Japanese-American community living in Hawai'i, were especially susceptible to the claims of germ-free products. "The bubonic plague and Chinatown fire of 1900 was still fresh in the memory of many Honoluluans. In an environment in which the Chinese, Japanese, Korean and Filipinos continuously changed the geography of race in the city, the specter of germs constituted a peculiar threat to Honolulu's elite community...Woodbury's took advantage of the public's fear of contamination, a strategy that resonated especially with Hawai'i's English-speaking community."6

In any case, while the Federal Trade Commission filed a complaint against Woodbury for several other false claims in 1938, it wasn't until 1941 that they issued a cease and desist specifically on the germ-free marketing, noting that their germ-free/germ-proof products were neither "sterile" nor had any antiseptic properties. The promises made by today's beauty products seem less unbelievable than those Woodbury made in the 1930s - there's no way a company now could get away with claiming any product to be germ-free - but the ad copy is much more vague so as to avoid legal liability. Take, for example, Clé de Peau's holiday 2022 collection, the face cream of which contains something called  "Skin-Empowering Illuminator" with an exclusive ingredient the company has dubbed "4MSK."  In some ways this sort of drivel seems worse than more specific claims.

Have you ever felt misled by makeup marketing? The vast majority of marketing is patently untruthful, but I think the one I've been snookered by the most is anything labeled "shine-free". As an oily-skinned person I can tell you that I've spent countless dollars trying to achieve a matte t-zone to no avail, yet I fell for it hook, line and sinker for many years. Needless to say, I would have purchased Woodbury's germ-proof powder to avoid the horror of "shiny nose".

1 In their official ads, Woodbury inexplicably appeared to use "germ-proof" for rouge and lipstick and "germ-free" for skincare and face powder. Newspaper ads for all products seemed to use both terms interchangeably.

2  In 1936 Woodbury had increased the percentage of ad copy dedicated to discussing the germ-free qualities of their products; nevertheless even the earlier ads were significantly focused on the products being germ-free. See Advertising Age, December 9, 1935, vol. 6, issue 49, p. 25

4 I have yet to find any evidence that there was a Dr. Charles (or any doctor for that matter) behind Dr. Charles Flesh Food. If anyone can dig something up I'd be grateful!

5 These statements are based on a quick review of newspaper articles from the time, including "Girls Warned Lipsticks Are Germ Carriers," Indiana Gazette, June 24, 1924 and "The Removal of Makeup," Des Moines Tribune, February 20, 1929.

6 Imai, Shiho. Creating the Nisei Market: Race and Citizenship in Hawaii's Japanese American Consumer Culture. University of Hawai'i Press (2010), p. 49. This statement suggests that xenophobia and racism may have been at play as well in the marketing and purchasing of germ-free products. In this case, buying these items may have been viewed by Japanese Americans living in Hawaii as a way to assimilate and avoid accusations of uncleanliness or spreading disease. (Again: see the current pandemic and greatly increased hate crimes towards Asians.)