I forget what I was looking for when I stumbled across beautician and stylist Eddie (Eadward) B. Deason (1921-1976). Like Blanche Hunter, Deason's story is incomplete. But the few things I could find are definitely worth highlighting.

Deason opened several successful House of Charm salons throughout the Los Angeles area in the late 1940s and early 1950s. According to features in Jet and Tan, he had pioneered new styling techniques for Black hair, including a less time-consuming process for pin curls. He also lent his name to advertisements for a hair styling brand called K & K Hollywood in the mid-1950s. 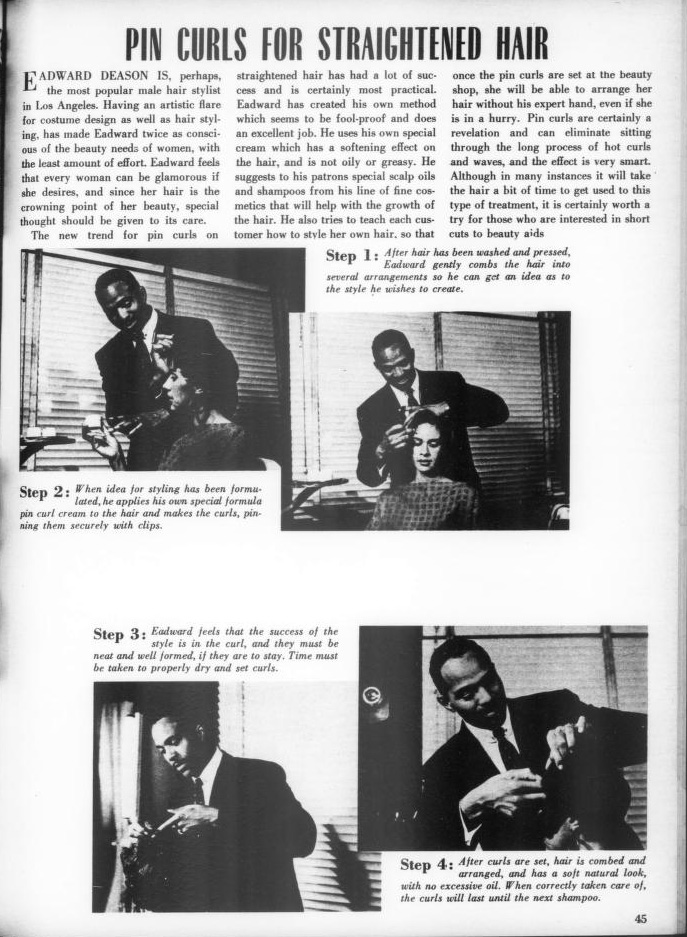 The man was a quadruple threat: he sang, styled hair, designed dresses and emceed fashion shows, many of which were benefits for the local Black community. 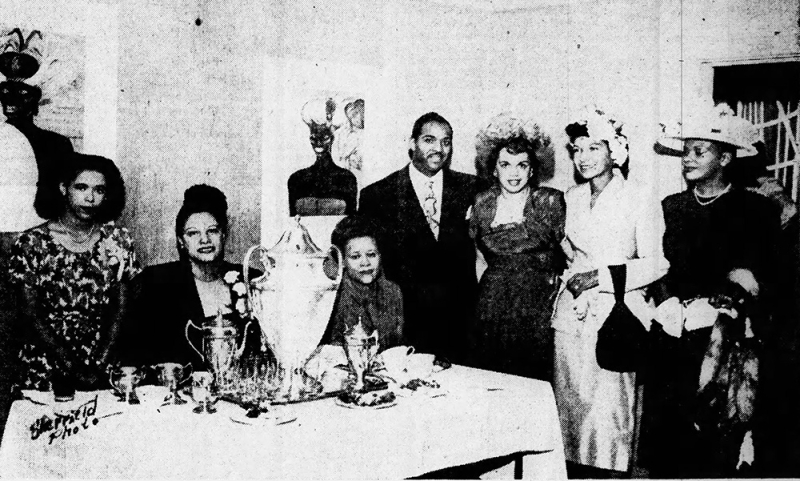 He also threw elaborate parties at the homes he shared with his business manager and romantic partner, Frank (Franklin C.) Jackson. Deason's relationship with Jackson presumably dated back to 1939 and lasted at least until 1964.1 Frank is all the way on the left in this photo from 1948. 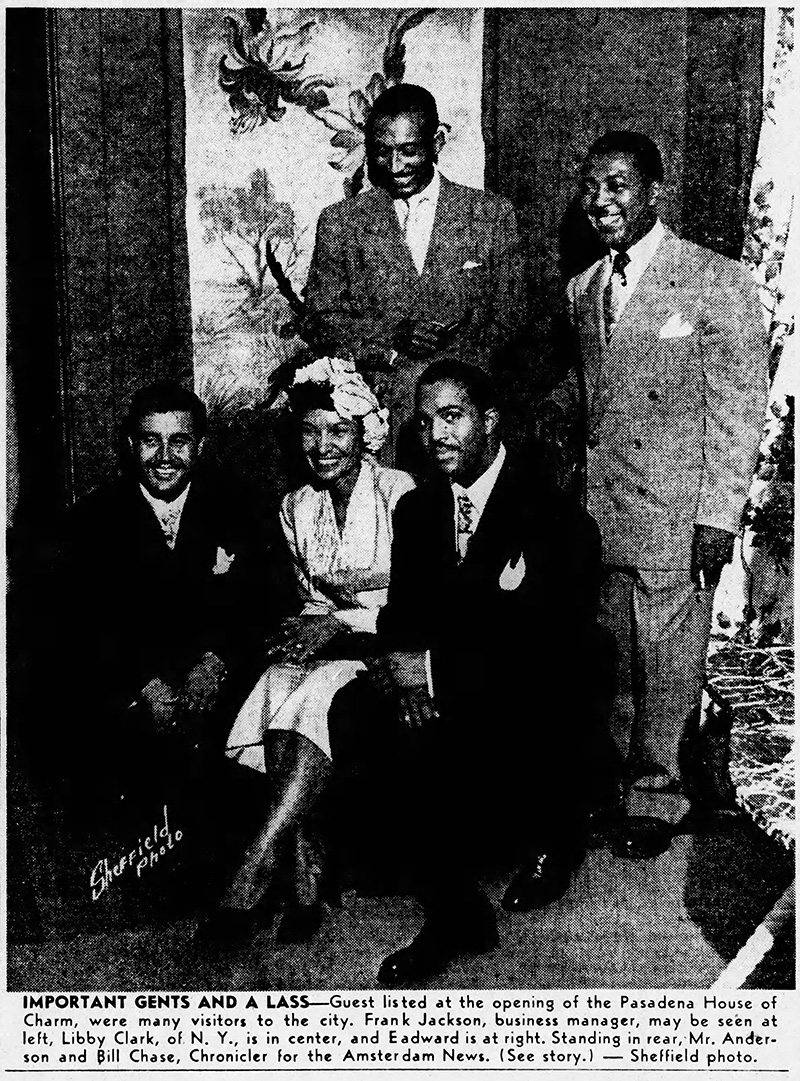 I believe Frank is also shown here, seated 2nd from the right below/between the two blondes. 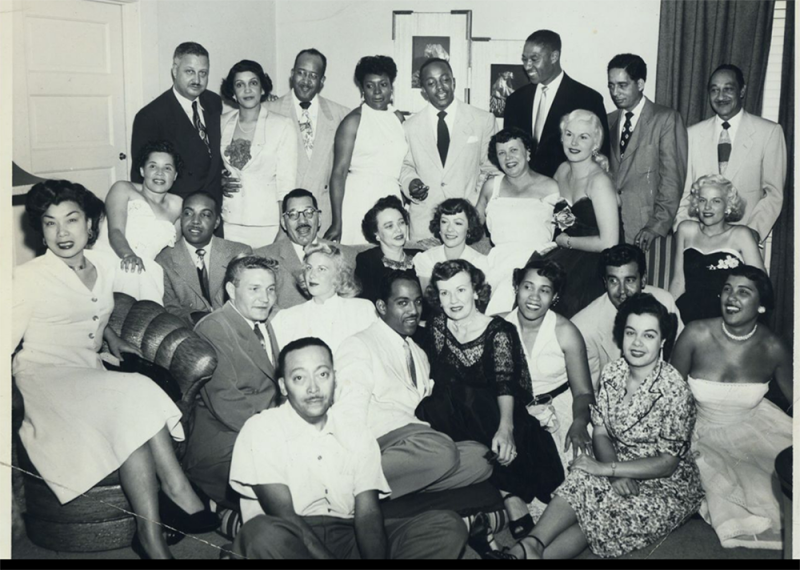 The text on this photo reads, "A girl who came west to go into pictures (?) stopped by office -- and met Eddie Deason. He made a date (?) with her but affair was doomed. He had Frank [Jackson]." 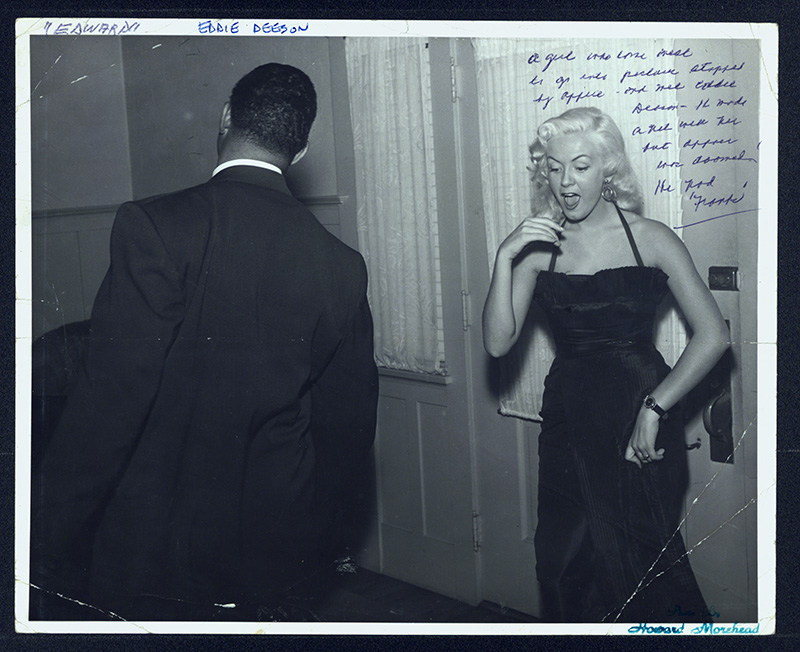 Obviously, neither Deason nor Jackson escaped persecution. Deason was arrested in 1947 for being in the "wrong" neighborhood after returning from a fashion show in broad daylight and then falsely accused of smoking marijuana. He was arrested again in 1949 for being "caught in a compromising position with a man in a men's room of a service station" and again in 1951 for sitting in a parked car (and subsequently shot at by police - fortunately he was unharmed.) Both Deason and Jackson were arrested, along with 7 others in a 1959 raid on one of their homes for narcotics possession.2 All of these point to how dangerous it was for Black men to merely exist in the 1950s, made even more so by virtue of being gay.

As the Museum focuses on makeup and not other grooming categories (hair care, skincare, etc.) you might be wondering why Deason is being featured here. Among his many accomplishments, one of the most important ones was Deason's alleged status (at the time) as the first and only Black person to study in Max Factor's studio. He reportedly trained with makeup director Abe Shore and studied cosmetic chemistry at the University of Southern California. He then became the first Black cosmetology student at the Frank Wiggins Trade School (now known as Los Angeles Trade Technical College). In 1941 Deason was appointed the lead makeup artist for the performers in Duke Ellington's all-Black musical revue, Jump for Joy. Interestingly, Ellington forbade the performers to darken their skin tone with makeup3. Deason is not mentioned by name in any of the anecdotes about that and I wonder if he was responsible for the makeup of only the female performers. As one article states, "Uniform 'luscious brown' of Jump for Joy's girls is laid to the cosmetic artistry of the young Factor expert."4

It appears Deason wanted to use this experience as a stepping stone to ultimately "get the makeup concession for all [Blacks] in the motion picture industry".  This might explain Deason's role as an extra in 1942 for the film Hers to Hold, which was released a year later. 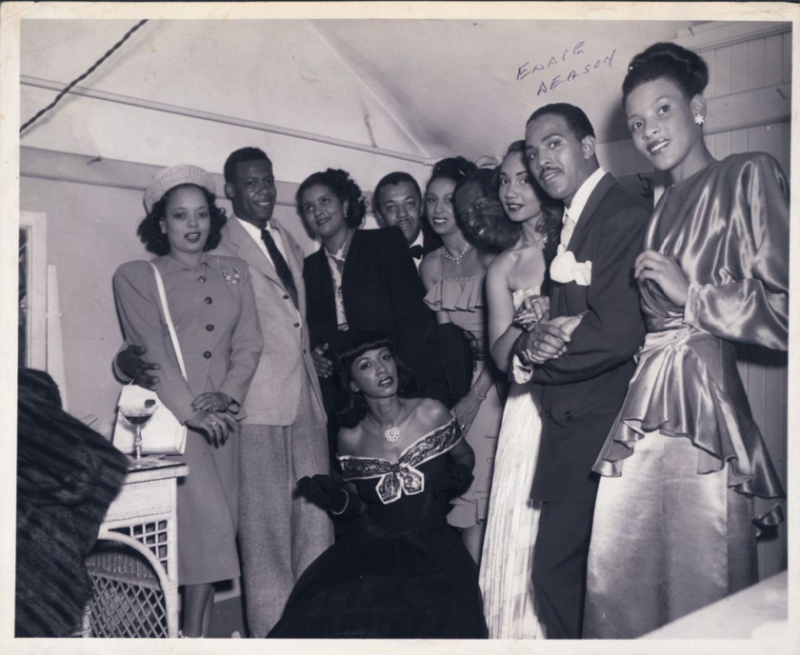 In any case, Shore was invited to attend the grand opening of Deason's salon in Pasadena in 1948, along with the director of the Frank Wiggins Cosmetology school. In December 1952, Jet reported that Deason was offering his makeup services to Los Angeles studios for free as a way to start his own company specializing in TV makeup for Black actors. It doesn't seem that his original plan for entering the makeup business came to fruition, as articles after 1952 only highlight Deason's work as a hair stylist and fashion designer. 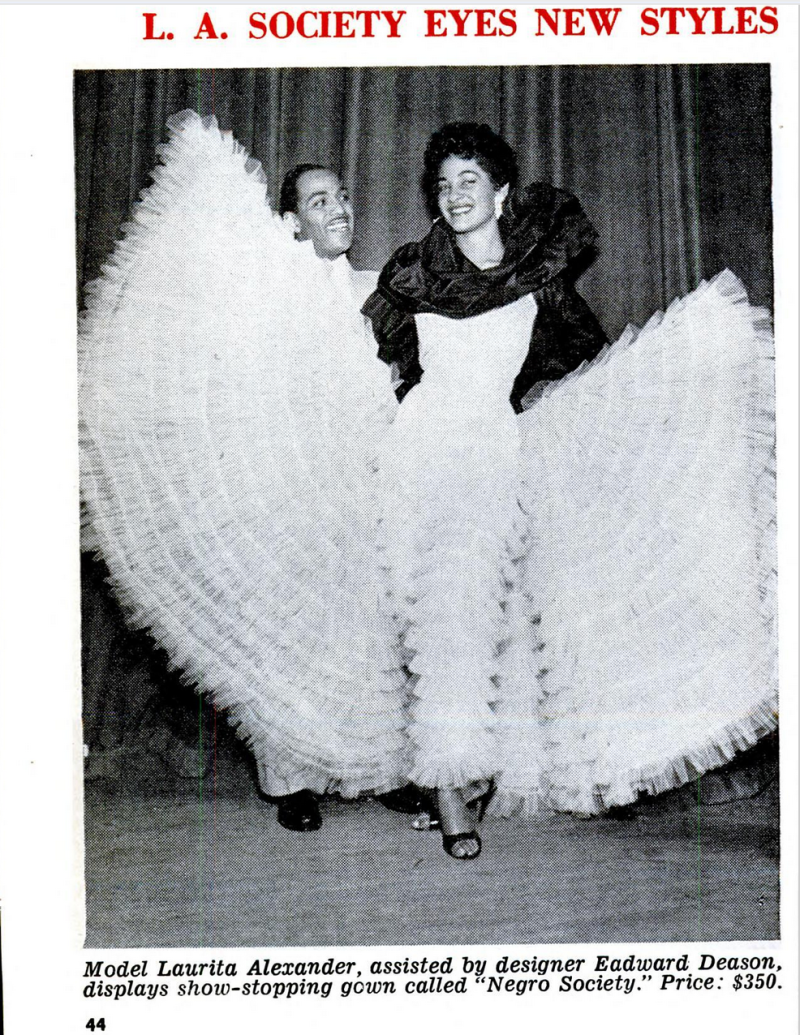 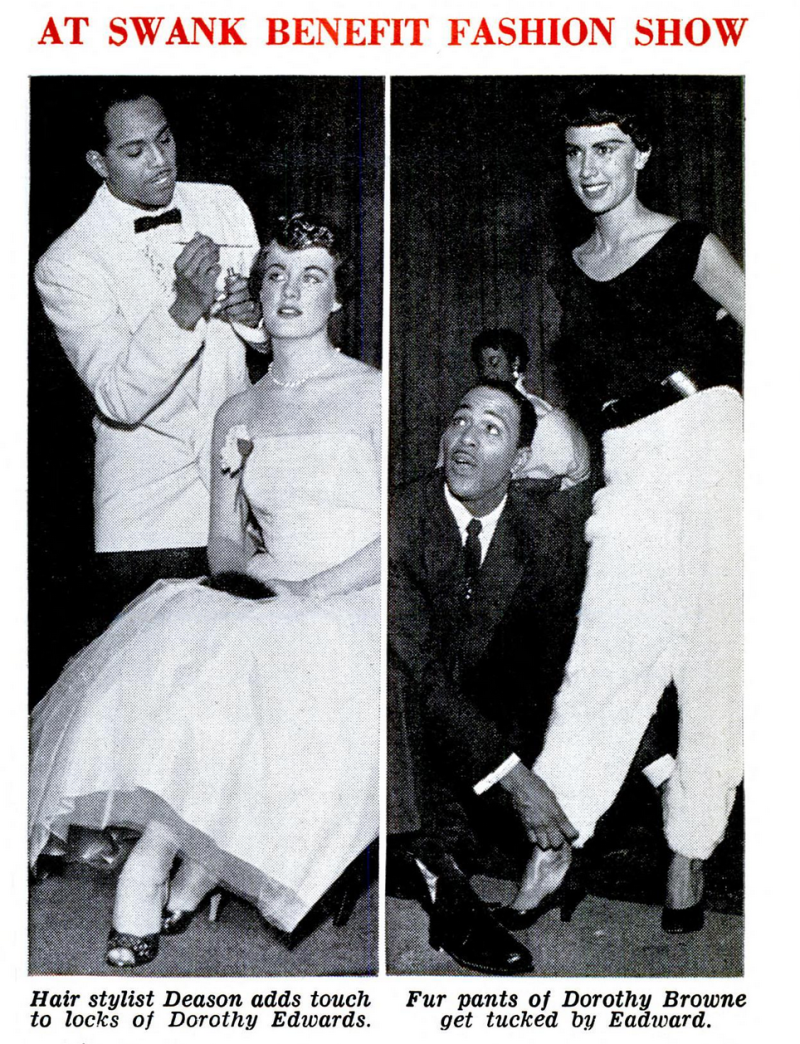 I really wish I could have found more about the makeup artist side of Deason and more biographical details. UCLA lists his birth and death dates, which I couldn't find anywhere else, so that leads me to believe they may have more information in their archives that hasn't been posted online. I also wonder if the University of Southern California, the various Max Factor archives or Los Angeles Trade Technical College would have anything about Deason.5 It's both frustrating and saddening to witness such a dearth of history about another successful Black beauty entrepreneur, especially one who was possibly the first Black makeup artist to have trained in the predominantly white, though prestigious, space that was the Max Factor studio.

What do you think? If there are any professional researchers, historians, archivists, genealogists, etc. who are willing to help find more information, please let me know!

1The earliest mention of Jackson and Deason attending a social event was from the Victorville Daily Press, January 27 1939 - perhaps they met there? The latest mention that listed both was from the California Eagle, January 9, 1964. The last mention of Deason at all I could find in newspapers was a snippet about an art auction to benefit affordable housing, which was hosted at his home (The Valley News, July 23, 1971)

3Some Black entertainers - especially comedians - used blackface to adhere to the prevailing racial stereotypes of the time. Obviously colorism in makeup is a huge topic that goes beyond this post, but as it's relevant to Deason I wanted to mention it.

5There is another place that may offer a tiny grain of additional information - this collection has one frame from archival footage showing Deason.