Today the Museum is featuring a flash-in-the-pan brand from the 1940s. Shem el Nessim was a very short-lived line, lasting only about 6 months during the second half of 1946. I couldn't find much info, but one thing I can say is that it's not related to the fragrance of the same name by British perfumer Grossmith. The collection consisted of a lipstick, lipstick set with 2 refills, face powder, and a face cream. 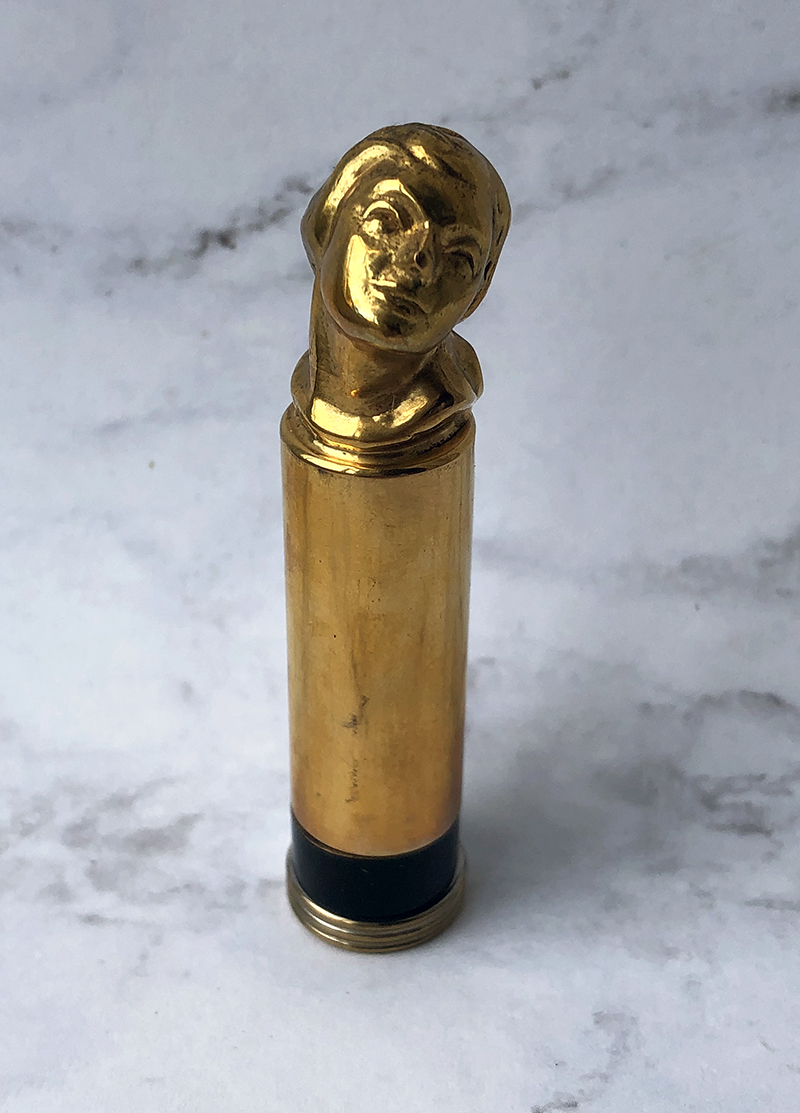 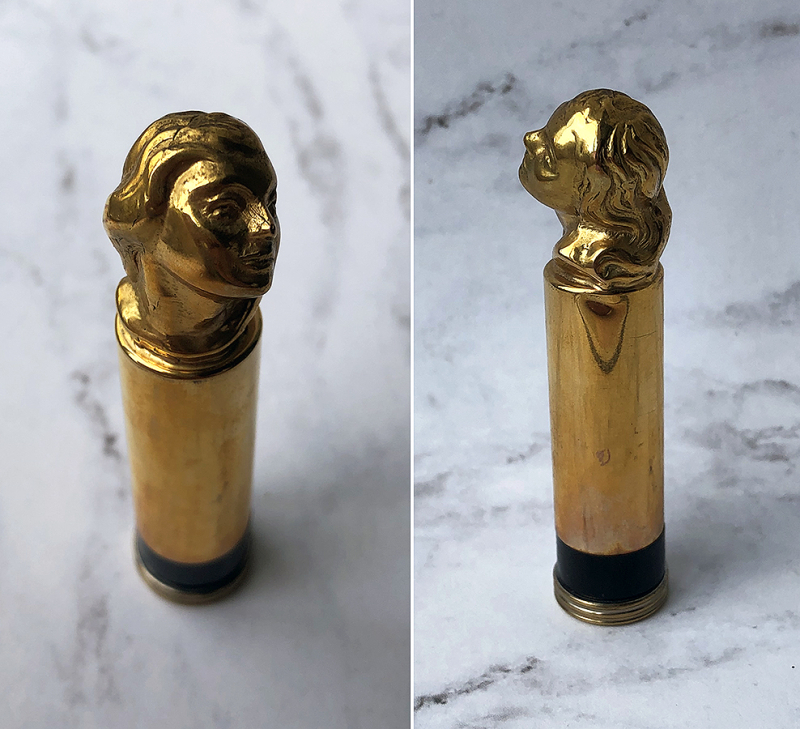 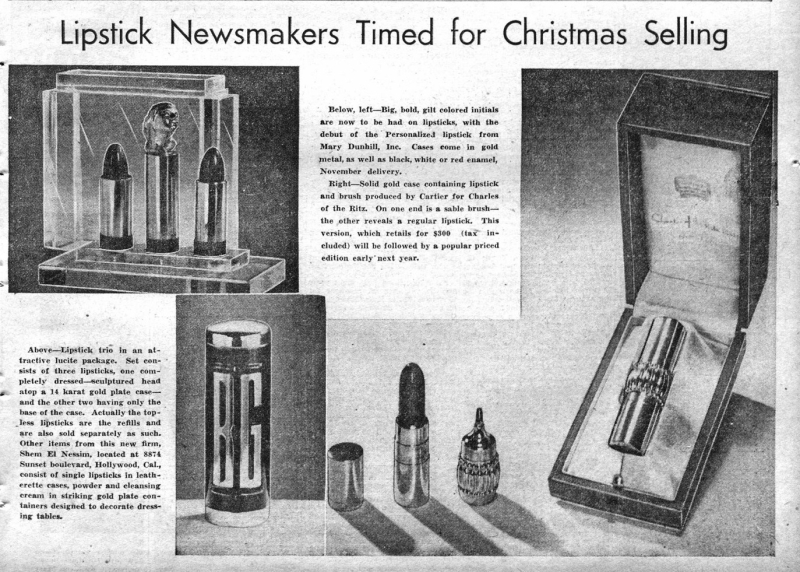 Let's talk about the cultural appropriation aspects first. Shem el Nessim appears to be an incorrect, or at least outdated, spelling of Sham el Nessim, a roughly 5,000 year old Egyptian festival/holiday that is celebrated the day after Orthodox Easter (which, this year is today...yes, I've been planning this post for a while). The day marks the beginning of spring and is accompanied by several traditions, including dyeing eggs and enjoying picnics and other outdoor activities. Shem el Nessim loosely translates to "smelling the breeze". Why Grossmith spelled Shem with an "e" is beyond me, but it seems this new brand did too. And while Grossmith engaged in cultural appropriation to market this fragrance and others, they came relatively close to understanding the holiday and translating it correctly. The Shem el Nessim cosmetics line, meanwhile, claimed it was Arabic for "bloom of youth," which is totally off. Also, the name of one of the three lipstick shades appears to be nonsense. "Garfoz" does not seem to be an actual word in any language. 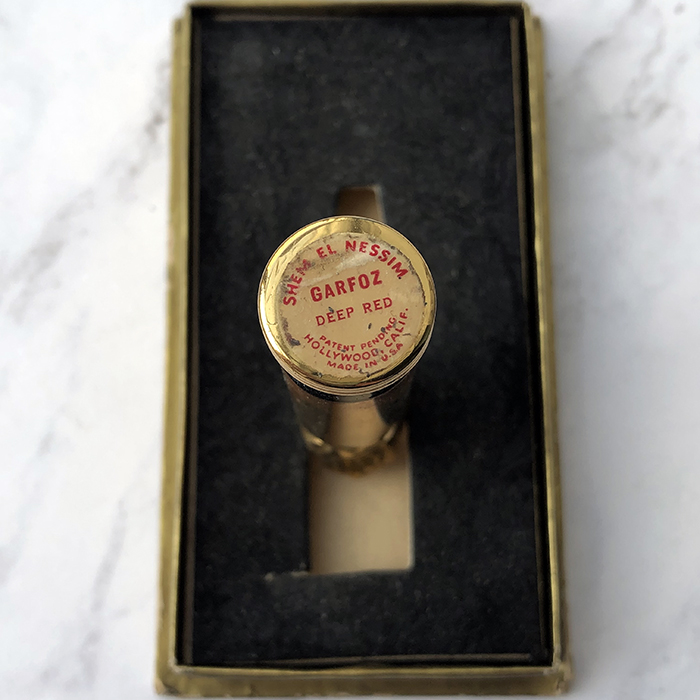 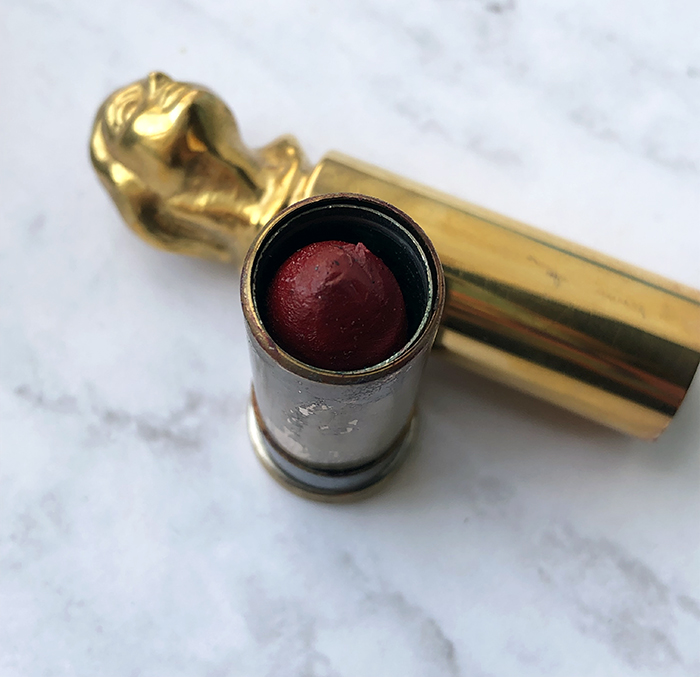 Next, the face cream container is shaped like an "Aladdin lamp"?! No information turned up about the brand's founder, but I'm going to go out on a limb and say that Shem el Nessim was started by a white American who wanted to capitalize on Western fantasies of the "exotic" Middle East. It's certainly an eye-catching design for a face cream , but completely inappropriate for a brand with no roots in or discernible connection to Egyptian or Middle Eastern heritage. Not to mention that if the entire jar was filled, it would be cumbersome to dig out product from the pointy front part of it. 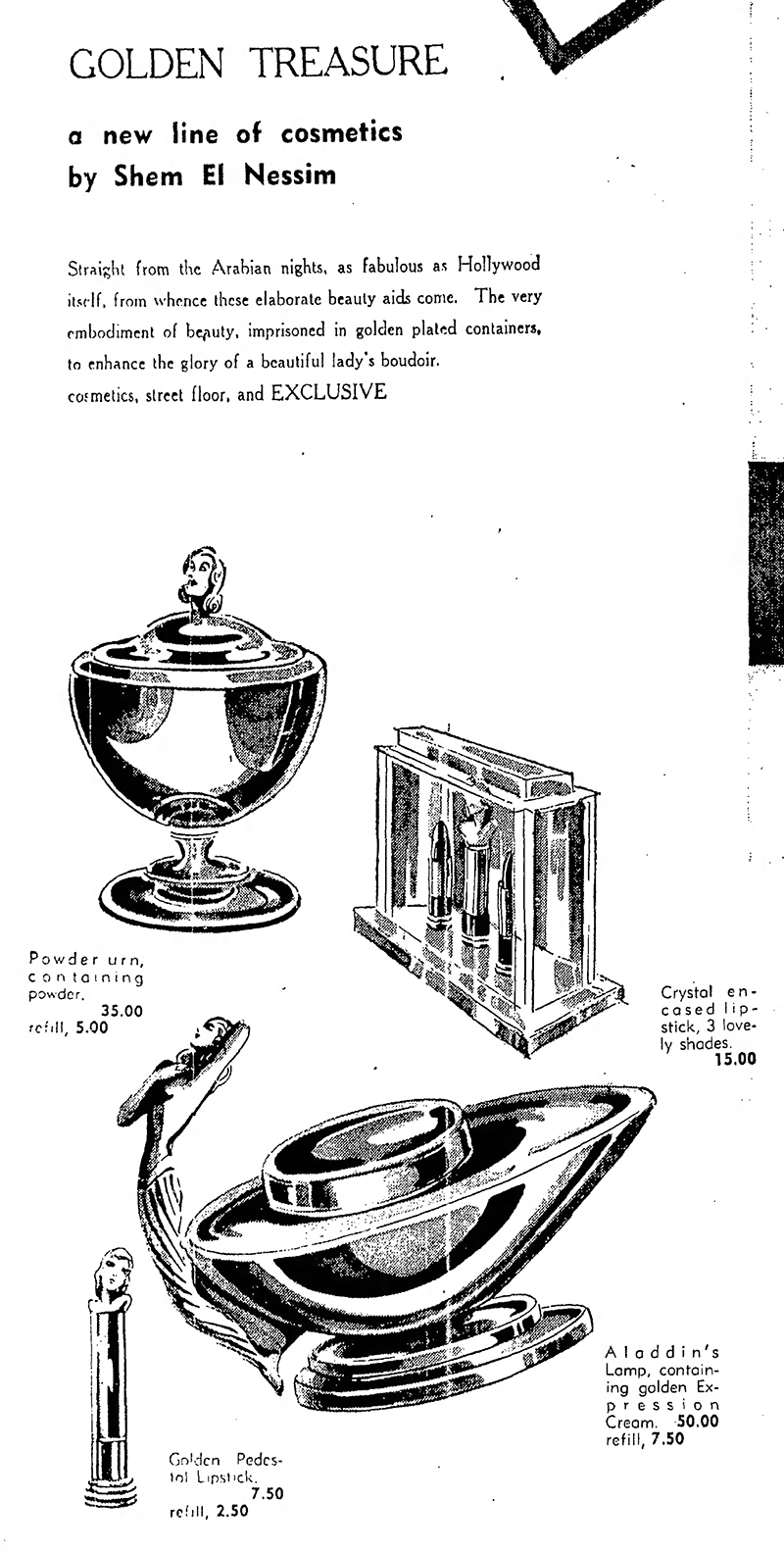 In addition to using an existing product name, Shem el Nessim may have been looking at Amor Skin's lamp-shaped face cream, which debuted in 1927. It seems Amor Skin's lamp was originally a "Pompeiian" design, but by 1929 they were largely marketing it as an Aladdin Lamp.* Additionally, in the fall of 1946 Amor Skin heavily increased their advertising for the lamp and emphasized the Aladdin aspect, perhaps as a direct response to Shem el Nessim. Of course, the uptick in advertising may have been a simple coincidence, as Amor Skin had just returned to the market in the fall of 1946 after temporarily shutting down production during the war. 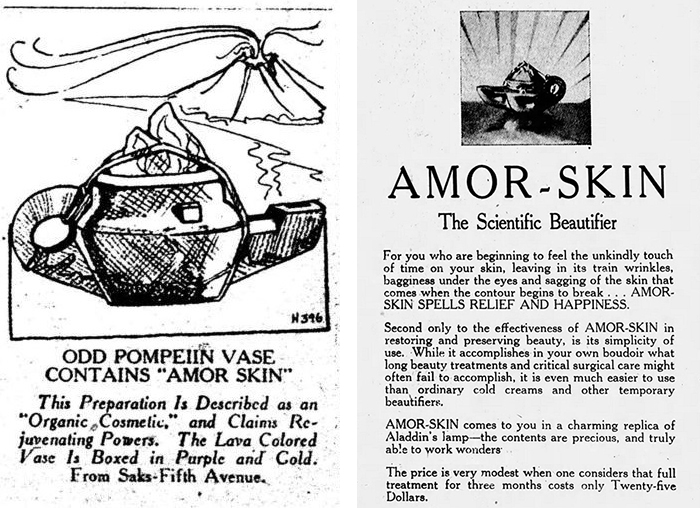 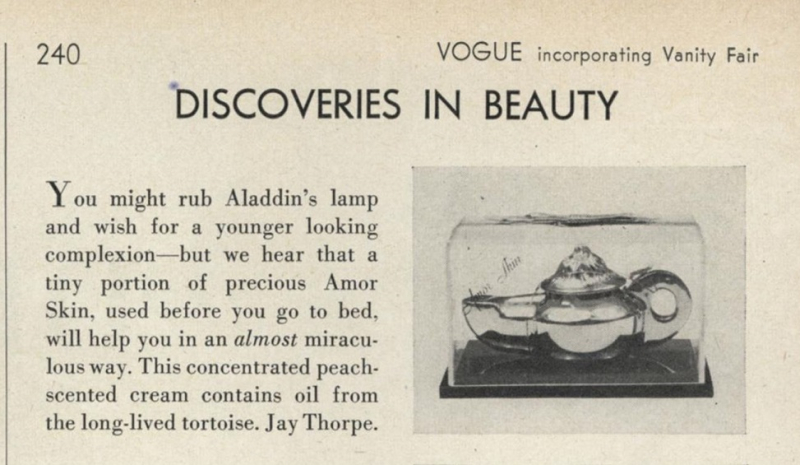 Lastly, the collection, or at least the lamp, was allegedly designed by a "Viennese sculptor" named Peticolas. 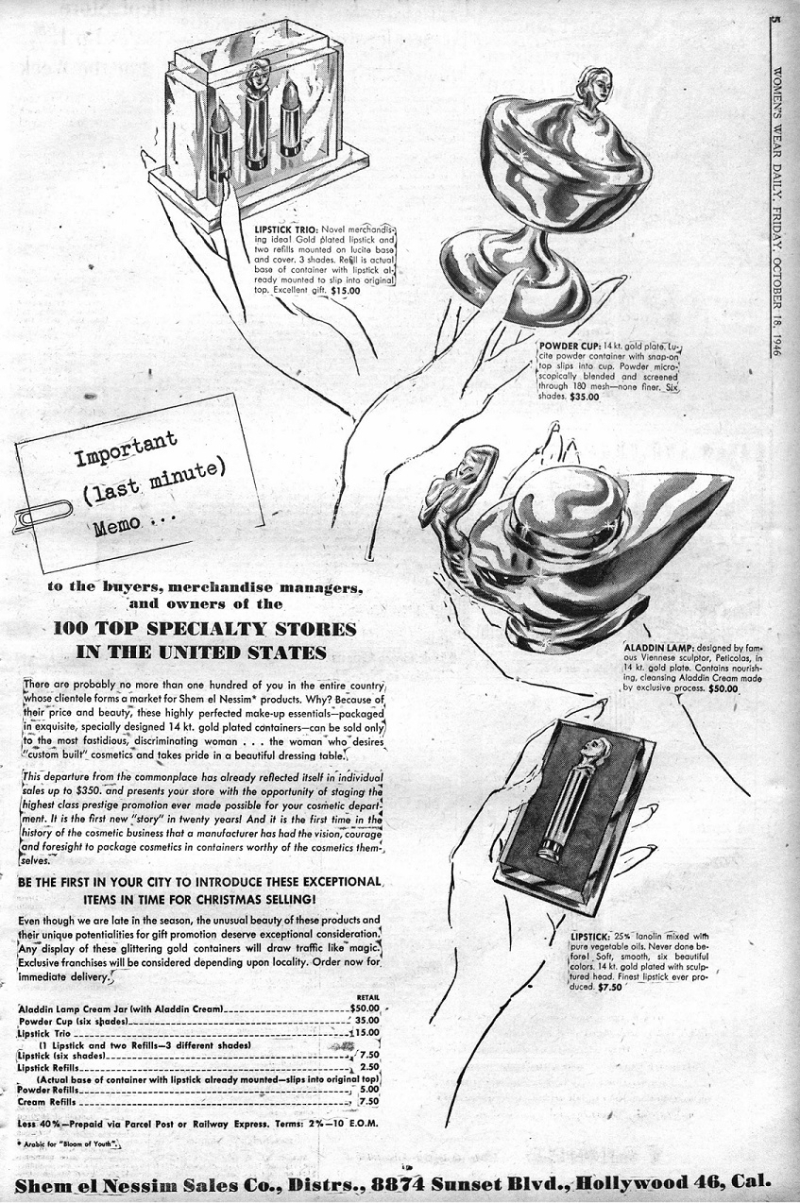 After a fairly exhaustive search, it seems this artist did not exist. There was a Sherry (Sherman) Peticolas who lived in L.A. and was active in the 1930s-40s, but as far as I know he was American, not Austrian. Additionally, his style was markedly different from the pieces in the Shem el Nessim line, and I couldn't find a record of Peticolas designing cosmetics.

So while it's certainly possible Peticolas was involved in the design, there's no concrete evidence to confirm. As of July 1946 Shem el Nessim had hired advertising agency Klitten and Thomas, so I'm wondering if the claims about the meaning of Shem el Nessim and the Peticolas design in the ad copy were entirely their doing. In any case, there doesn't seem to be any mention of Shem el Nessim after December 1946. I'm guessing Grossmith put a stop to the company very quickly, as the Shem el Nessim fragrance was most likely trademarked, and perhaps Amor Skin also told them to back off. Or it could have happened in the reverse: Shem el Nessim's owner(s) were unaware of either the Grossmith fragrance or Amor Skin lamp when creating the line, quickly realized their missteps and abandoned the business. What's interesting is that the Shem el Nessim Sales Co. did not seem to change names, they simply disappeared. Oh, if only all businesses that ripped off existing brand names (knowingly or not) would go away forever...the world would be much better off, yes? I also suspect the price points for a fledgling brand that was not an offshoot of a fashion/perfume house or other well-known entity were too high. A more established brand, or one started by a big fashion name or celebrity might have had better luck charging the 2022 equivalent of $110 for a lipstick. Per the ad copy, Shem el Nessim was intended to be "exclusive" and not mass market, but that may not have been a profitable tactic to start with. 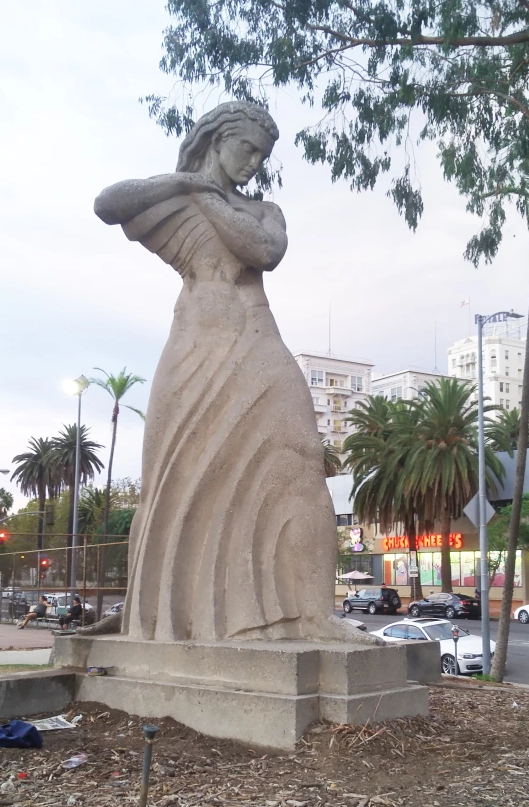 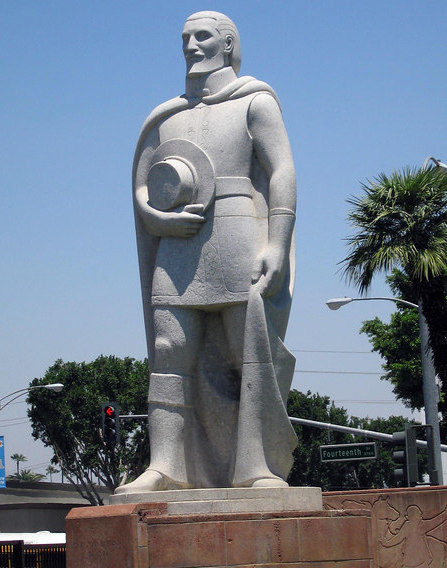 Cultural appropriation and unoriginal name aside, the Shem el Nessim lipstick case remains a unique specimen of makeup design. The style recalls both classical busts and Surrealist art, with a dash of Camille Claudel in the graceful tilt of the head, dreamy, far-away expression and rendering of the hair. It could also be considered a more sophisticated and artistic precursor to the doll-shaped lipsticks that would prove popular some 15-20 years later. 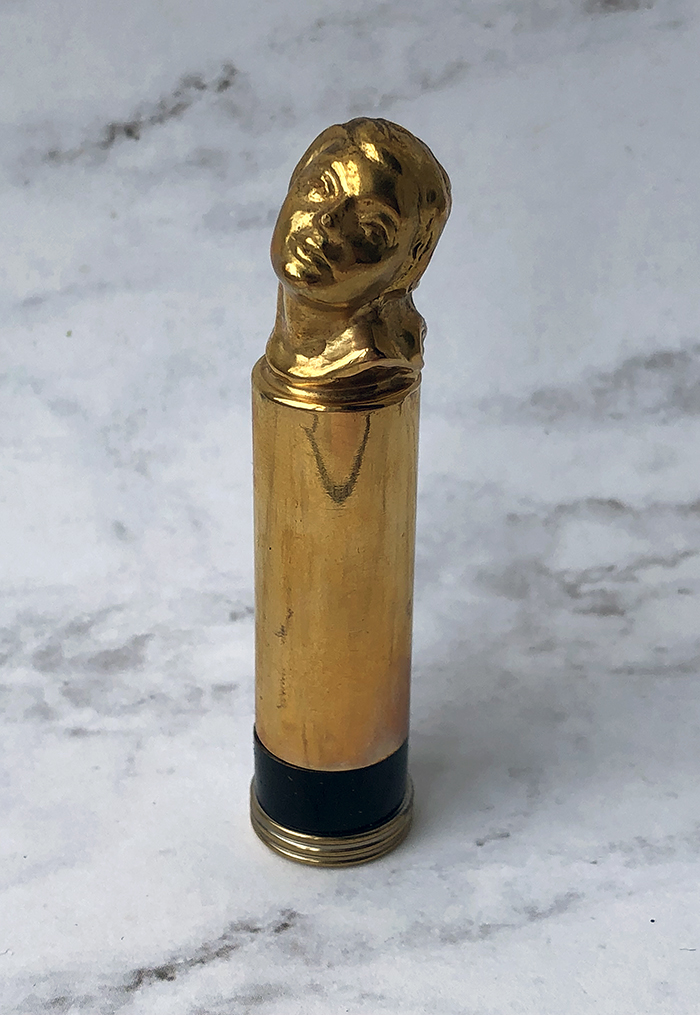 Finally, while I haven't seen actual photos of the other items, the lipstick looks to be the most elegant, albeit impractical, design - certainly more visually appealing than the powder urn (the poor woman looks decapitated) and lamp (overtly culturally appropriative and the figure's silhouette and pose are a bit tacky).

Thoughts? If anyone can contribute any other information on this brand I'm all ears. :)

*While nearly all of the newspaper ads between 1946 and 1950 referred to the Amor Skin lamp as Aladdin's, a handful of them along with the November 1946 issue of Drug and Cosmetic Industry used the previous Pompeiian description.