Get ready for some cute overload this Easter! I'm pleased to finally highlight 5 bunny-themed collections, 3 of which were released in spring 2019 (when I was preoccupied with other things) one from 2018 and one from 2016. Interestingly, all 5 are from K-beauty brands.

First up is Colorgram's Miffy collaboration. Miffy is a character created in the '50s by Dutch illustrator Dick Bruna (1927-2017) and is quite well known outside the U.S. I have to admit I had never heard of her until Colorgram launched this collection. It was a pretty massive lineup - while it looks like I bought all of it, I think the Museum ended up with less than half of what was released. 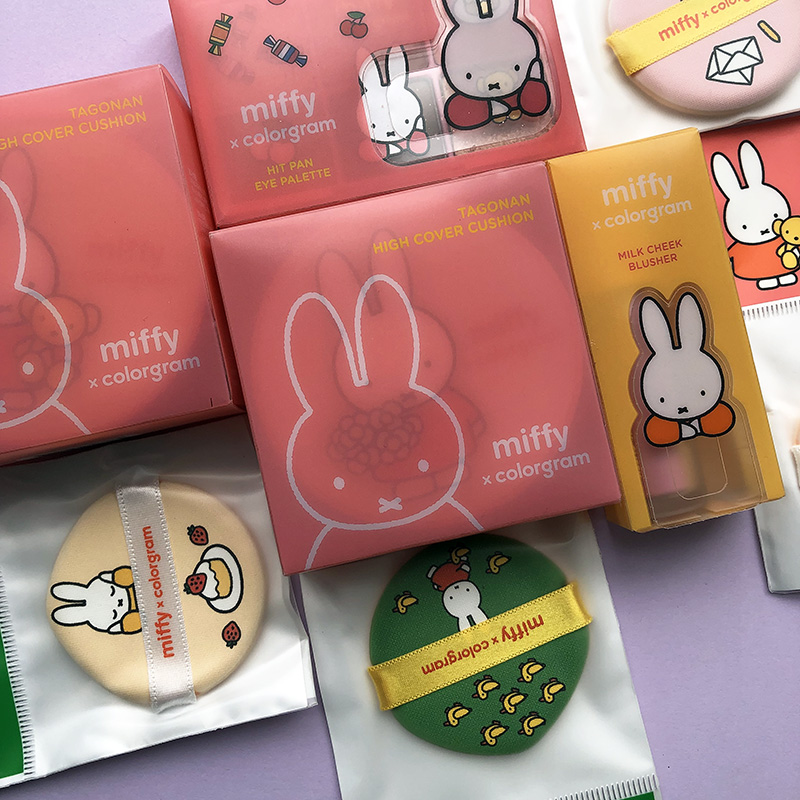 The character was inspired by bedtime stories Bruna told his son while on vacation in the summer of 1955. "Sitting on a rug near the shore, the family spotted a rabbit skipping around in the sand dunes. Bruna’s son Sierk, who had his own little woolen rabbit, was delighted, and Bruna was reminded of his own love of rabbits as a child. Later that evening, Bruna would tell Sierk a bedtime story featuring Nijntje, a shortening of the Dutch word konijntje, meaning ‘little rabbit’...This bunny became the inspiration for Miffy. Later, when Dick began sketching Miffy, he decided he would prefer to draw the bunny in a little dress, rather than a pair of trousers, and so Miffy became a little girl bunny." Coincidentally, Bruna was born in the year of the rabbit. 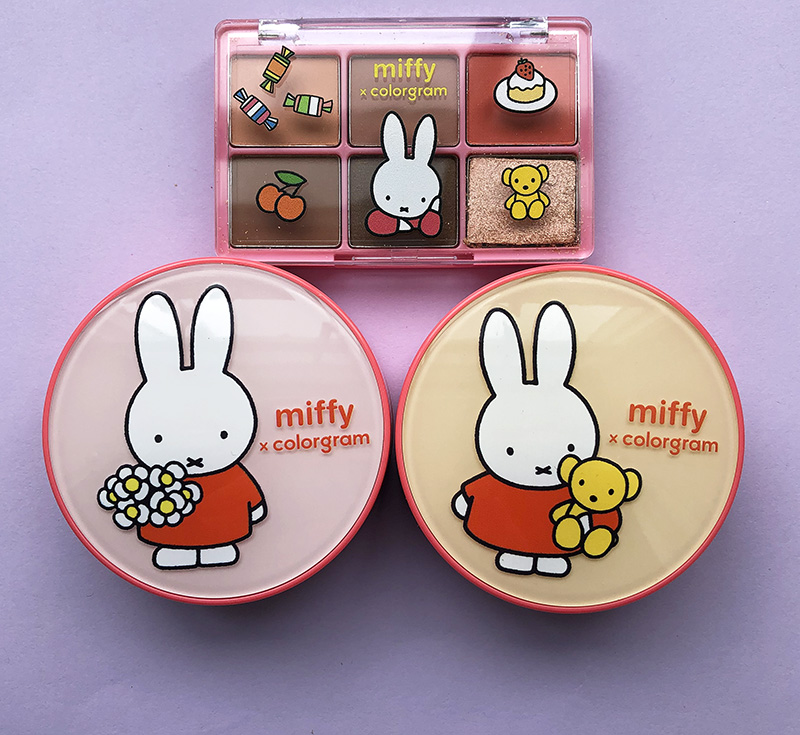 Bruna wanted to follow in the footsteps of the modern artists of his time, particularly Matisse, Picasso and Léger, but turned to commercial illustration to pay the bills. Nevertheless, the influence of these artists is apparent in Miffy's design, which was unique compared to the illustrations founds in children's books then. "Bruna’s Miffy creation looked more like a flat cuddly toy, with a little bit of Léger and Matisse mixed in. The ears flopped to the side and the eyes were a little askew, not yet communicating so directly with the reader. Over the years, her head became more round, the general shape flatter, the ears sharper and more symmetrical, the eyes bigger and wider apart. Bruna’s clarity, use of primary colour and lack of perspective was a breath of fresh air among the busy, narrative-led children’s publishing that typified the 1950s. But his minimalism was also expansive: by a minute tilt of the head, a blink of the eye, or the relation of Miffy to a particular room or a landscape, he was able to capture much of the emotion of early childhood experiences: celebrating a birthday, visiting a playground, going to school, going to the seaside. Miffy’s eyes and mouth, Bruna explained, always required particular attention. 'With two dots and a little cross I have to make her happy, or just a little bit happy, a little bit cross or a little bit sad – and I do it over and over again.'" 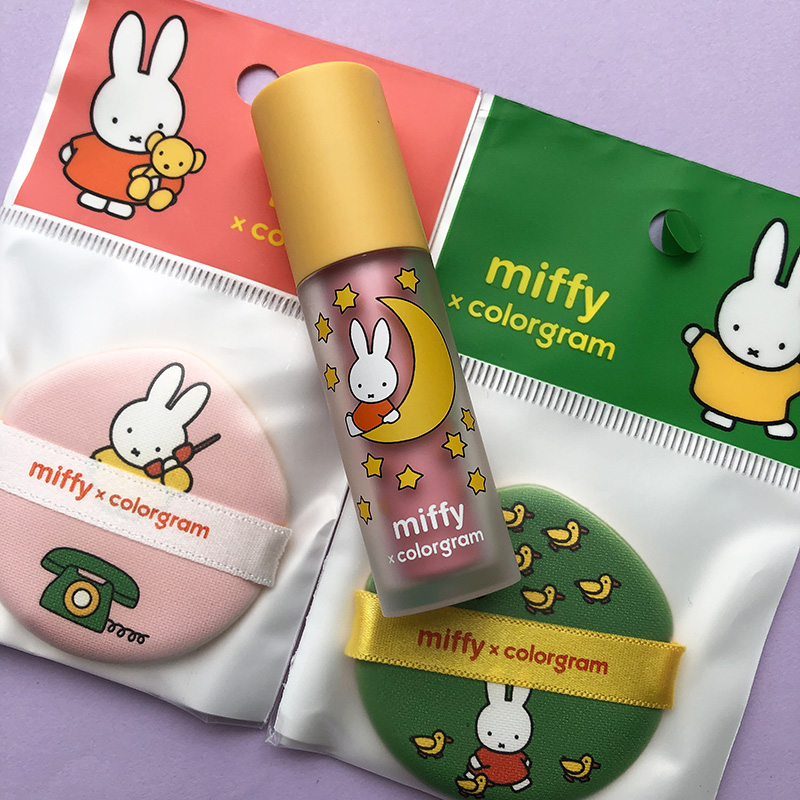 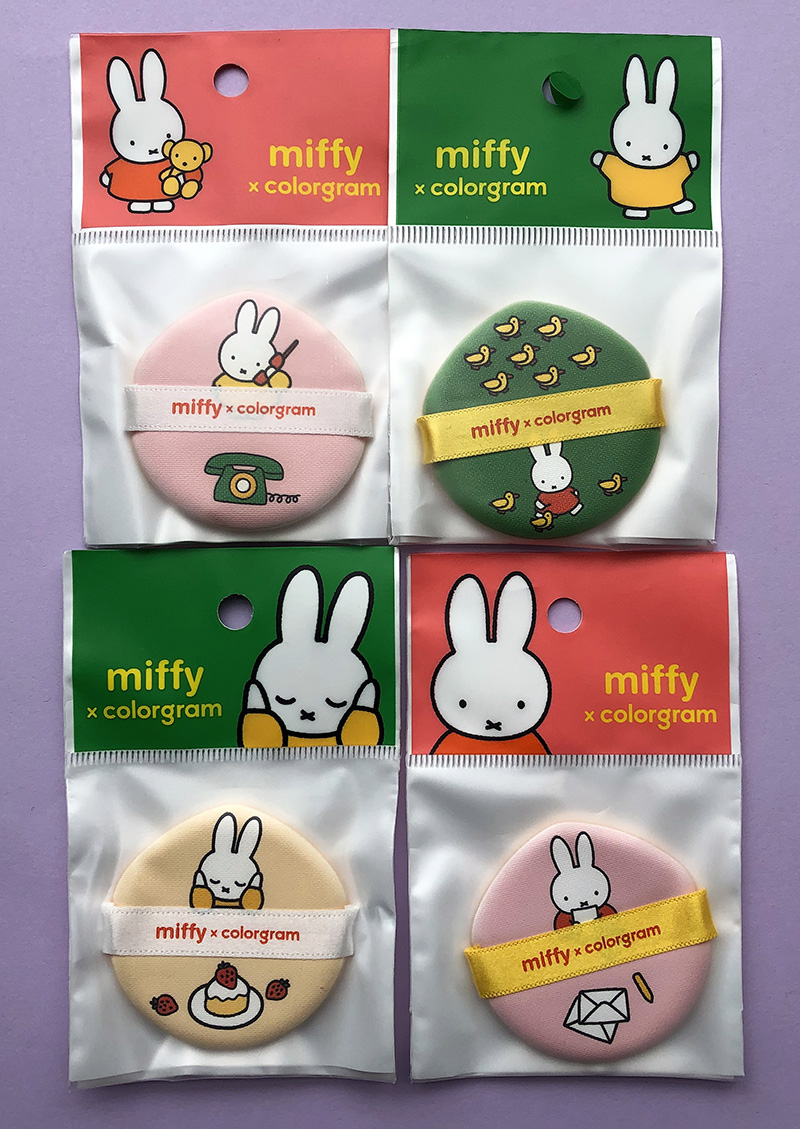 Miffy is nearly at Hello Kitty levels of merchandizing, which, again, why I was surprised I had never heard of her. Miffy's likeness is sold on everything from cookie cutters and baking dishes to chalkboards and book ends, and has appeared in a slew of non-makeup collaborations. And in addition to the Rijksmuseum's collection of over 100 original Miffy prints and several temporary exhibitions, the character has her own children's museum. 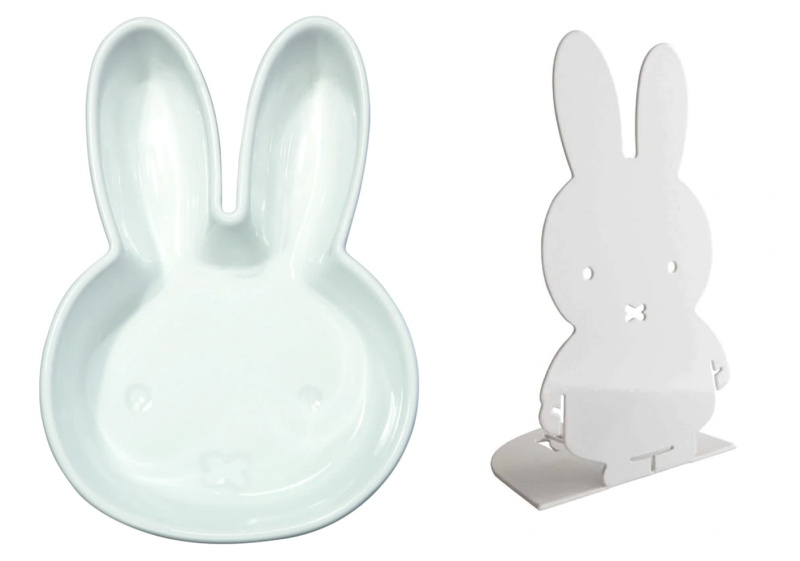 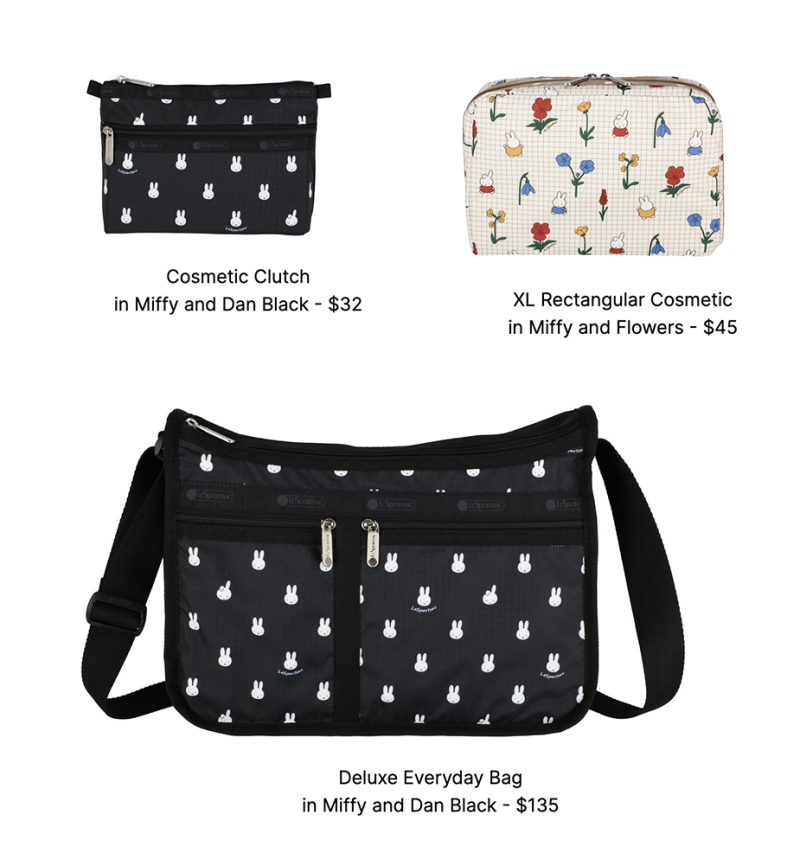 I am so sad I missed the Miffy Chinti and Parker collection! I stumbled across this brand a few years ago while hunting for a mermaid sweater and fell in love. Currently I'm waiting for the Care Bears lineup to go on sale.

Next up is Lilybyred's and IPKN's Esther Bunny collections. Esther Bunny was created by Korean American artist Esther Kim. Kim has a lifelong love of drawing and originally started in fashion illustration, but kept including bunnies in her drawings. Eventually she decided she wanted to focus more on them. The bunny character is Kim's alter-ego of sorts, expressing the feelings of isolation and foreignness that resulted from growing up in several different countries. "I wasn’t conscious of it when I was drawing it, but the bunny really represents me as a person. My parents took me [from LA] to Japan when I was a teenager, so I’m just really used to living in other people’s cultures and always being self aware and sensitive about that...I had so many cultures: Korean, American, Japanese. In any one situation I could react many different ways. It stressed me out. I was like, ‘Should I be American right now? Or Korean? Or Japanese?’ That’s why my bunny is so aware of other people." The big ears and sideways glances show Kim's introverted, sensitive and highly observant nature. "I think I can be very outgoing but I also have a very quiet reserved side that I think my bunnies capture. They are always looking sideways and their mouths are not really open or moving. They are quietly watching the situation, peeking. In some sense a big part of my identity is being an outsider or foreigner always a bit different so I’m watching the situation. It’s hard for me to have a strong opinion sometimes because I can imagine the situation from many perspectives so I take a long time to process my thoughts." 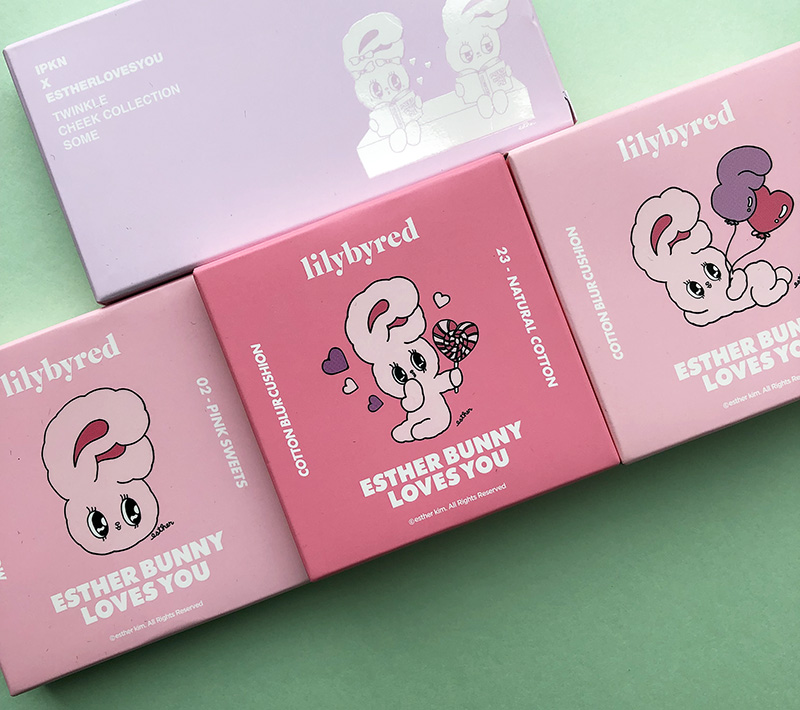 Esther Bunny seems like a cheerful little rabbit at first glance, but a closer look reveals how she captures the artist's own struggles. "Esther bunny looks cute on the surface, but underneath that, I think there’s a lot of sadness and loneliness that I’ve experienced in my life. I have a parent who has been very sick for over 10 years. I worked on my own trying to be an artist for over 10 years. I didn’t have any help. My bunny looks very soft on the outside but she’s been through a lot," says Kim. 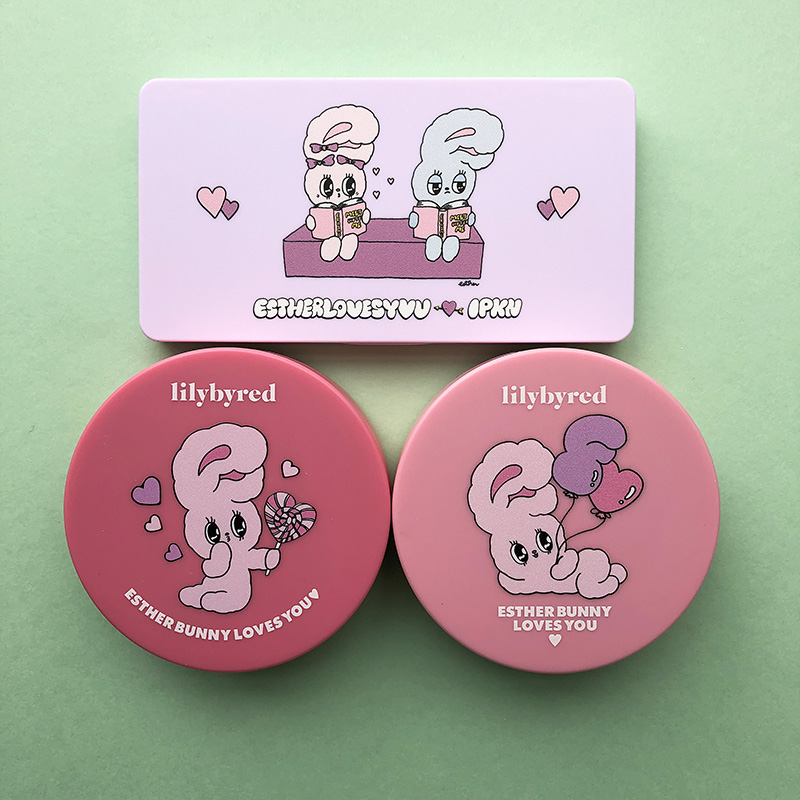 Still, Kim concludes that the creation of Esther Bunny was therapeutic for her and led to a new audience. "I'm so happy that I came upon Esther Bunny. A lot of people identify with it. I’m really happy that I’ve made this character that can be so universal... I'm very grateful to my art; it's taken me so long to make it my career, but it’s given me a place in this world." 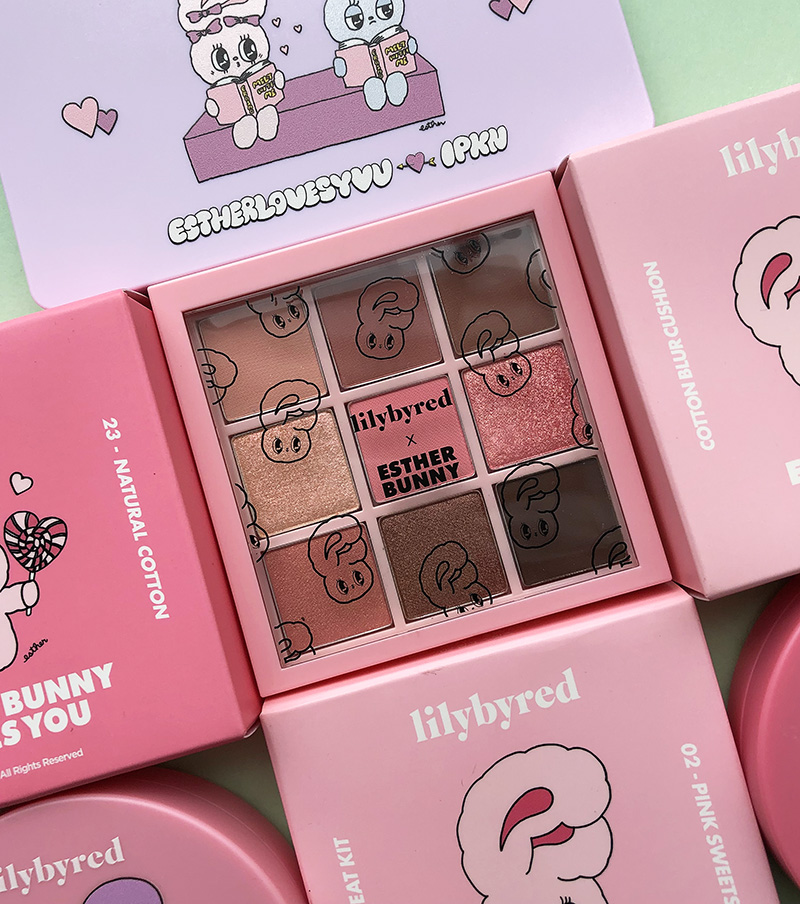 Like the Miffy collaboration, both the Lilybyred and IPKN collections were huge. 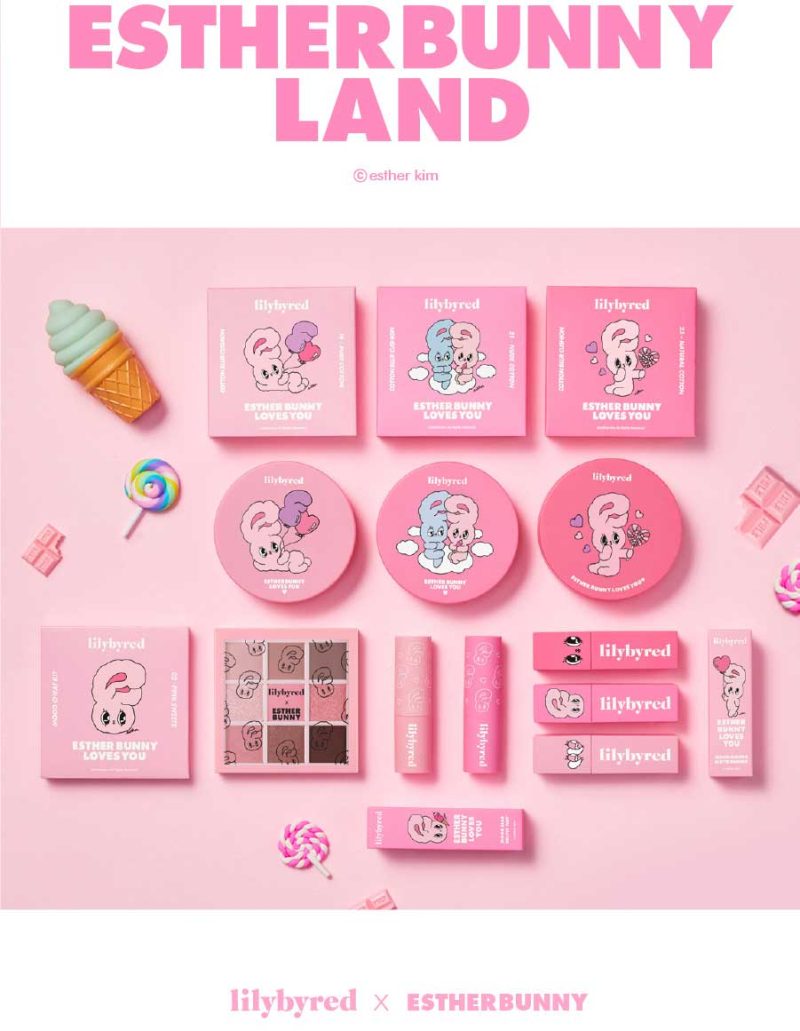 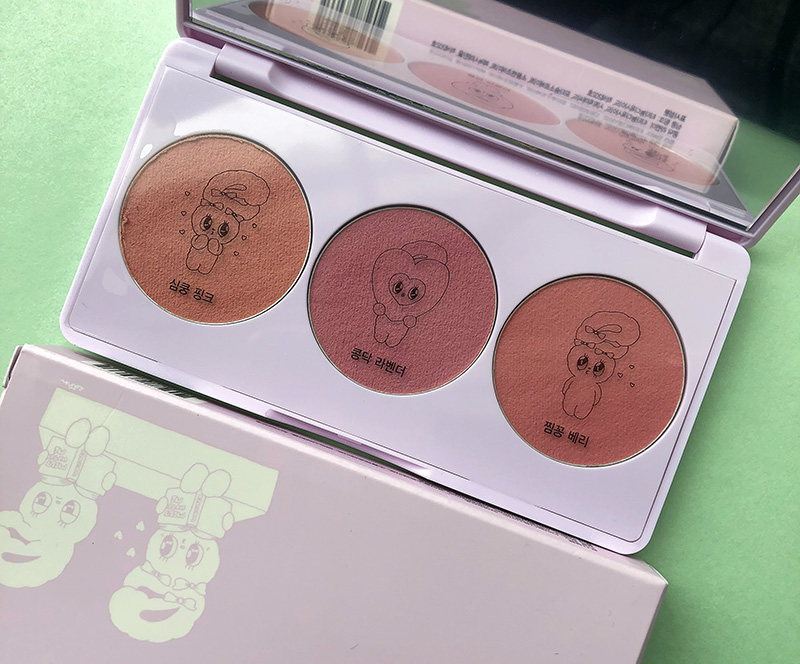 I am really kicking myself for not getting more of the IPKN lineup. I wasn't aware when it launched and ended up with just one palette that was still available several years after the initial release. 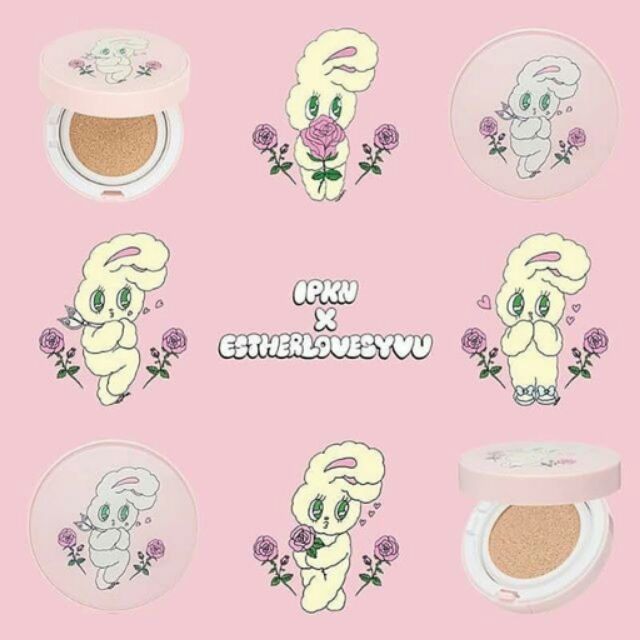 Especially this additional summer collection - she looks so adorable in her little pool float and bikini! 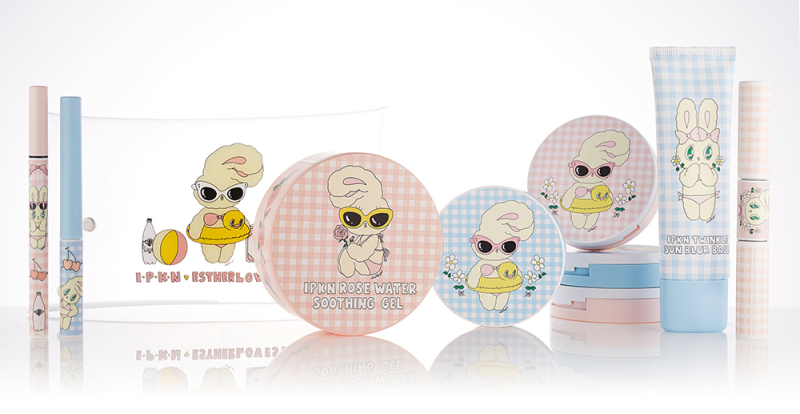 Esther Bunny has become a brand in her own right with many successful collaborations under her belt. 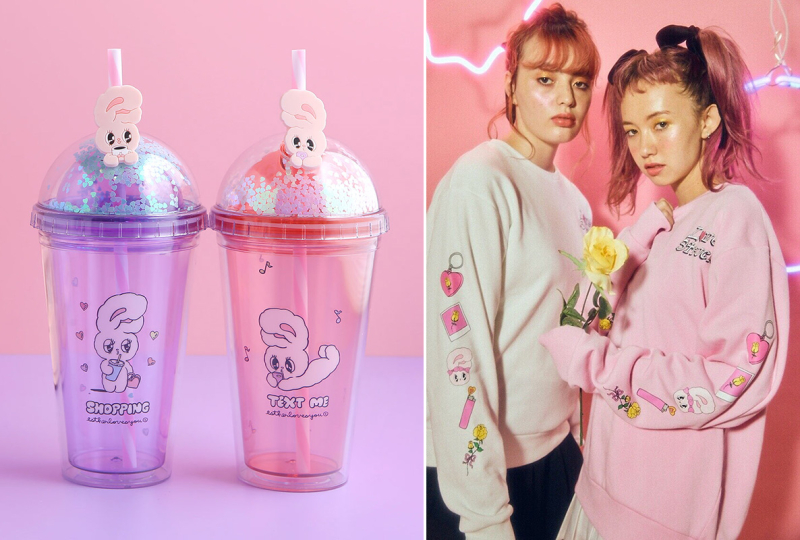 This next collection by Innis Free was released in spring 2019 to celebrate the 13th anniversary of their No Sebum Mineral Powder. The company partnered with Korean illustrator Gyung-seon Gu, who created 13 cushion compact designs featuring her rabbit character, Benny. Like Esther Bunny, Benny is a sort of alter ego for the artist, but in a different way. A fever caused Gu to become deaf at the age of 2. She continued to draw throughout her childhood and was eventually inspired to draw a bunny with long, pointy ears so that it could hear on her behalf. In 2007 Benny was officially born. As one article explains: "[Gu] looked for a spokesperson who would carefully listen to every sound in the world. From the animal encyclopedia, she learned that one of the animals with the best hearing ability is the rabbit. On the spot, she chose the rabbit as her character without a hint of hesitation. This marks the birth of Benny and of her career an illustrator, as she illustrates Benny as a very own representation of herself." Benny is also meant to be a symbol of comfort and encouragement in the face of adversity. The 13 designs are titled Follow Your Dreams, No Pain No Gain, Do What You Love, Ace Your Grades, Best Friends Forever, Seize the Day, Crazy Rich Bunny, Upward Facing Bunny, YOLO, Cheering For You, Way To Go, There For You, and LOVE, Bunny (you can guess which are which). 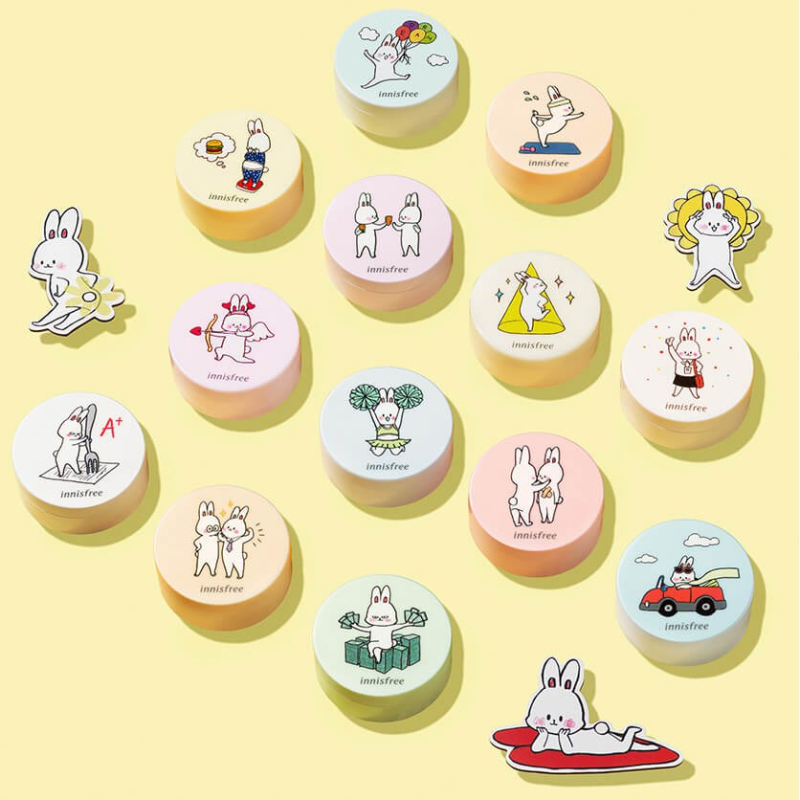 I regret only buying 3. 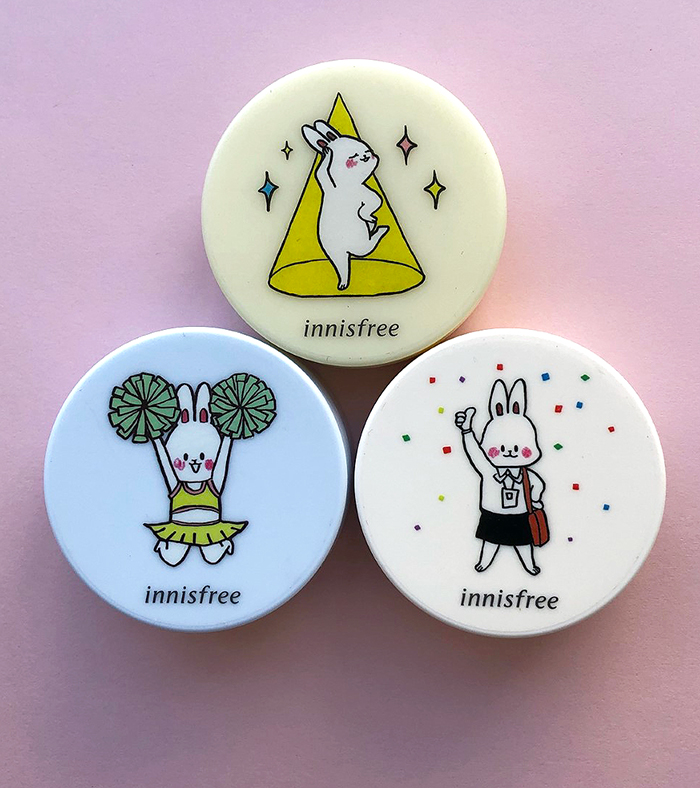 While Benny may not have been in as many collaborations as Miffy and Esther Bunny, they're a popular emoticon in the Korean messaging app Kakao Talk. Gu also had a solo exhibition in 2017 featuring over 120 original illustrations of Benny, which were later published as books, as well as a fragrance. In 2013, Gu was again struck with bad health news. This time she was diagnosed with a rare retinal disease that causes a gradual loss of vision, and the possibility of total blindness at any given time. But Gu refused to worry about her condition, choosing instead to celebrate the sensory abilities she has retained. "[Gu] set her sights on what she still has, not on what she may lose. With her olfactory sense intact, she embarked on assigning a signature aroma to her Benny." 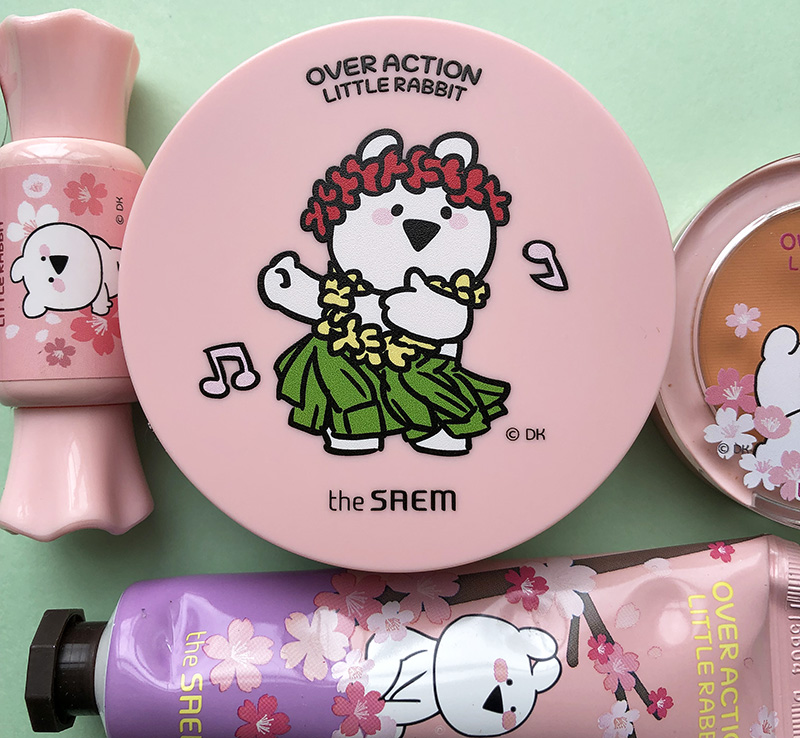 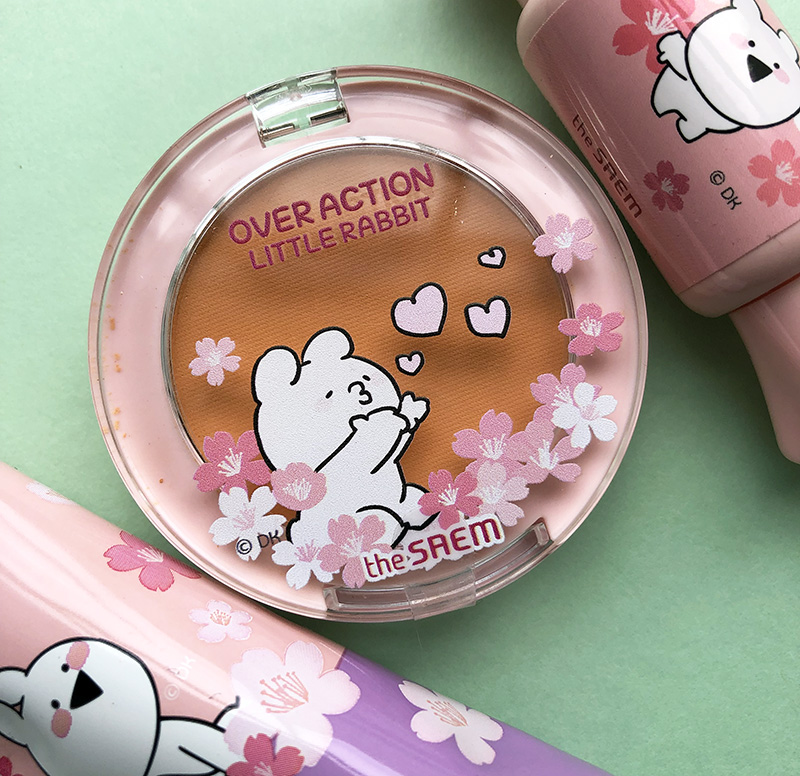 This was another huge collection, with two smaller Valentine's Day and summer launches. 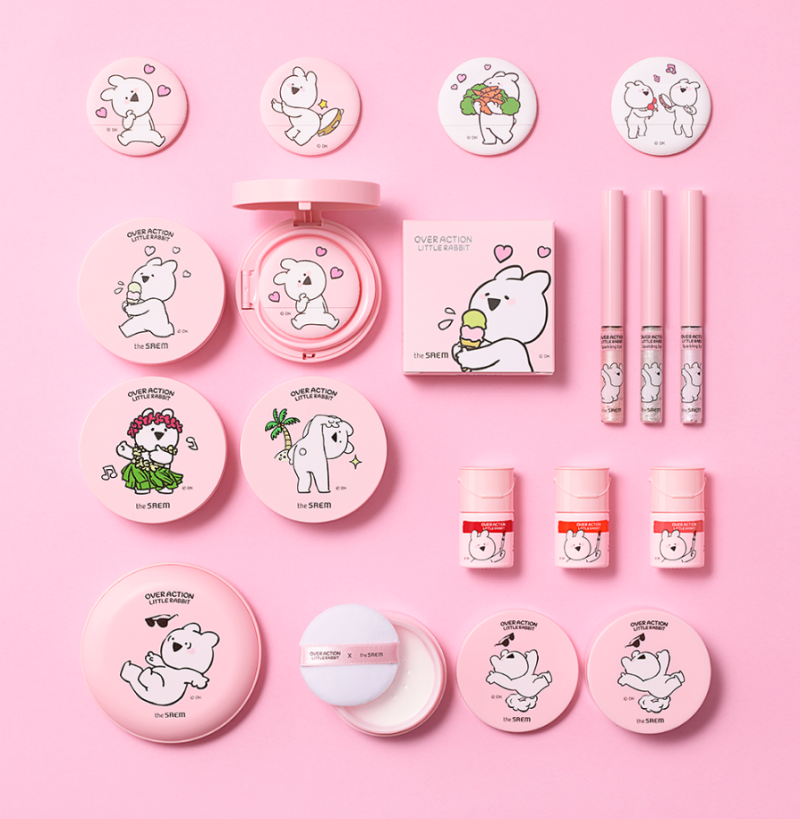 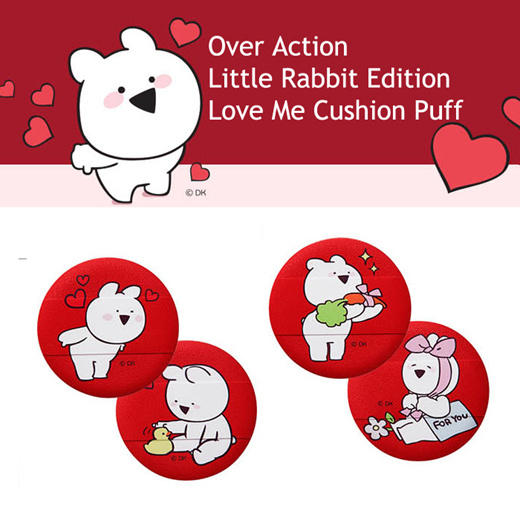 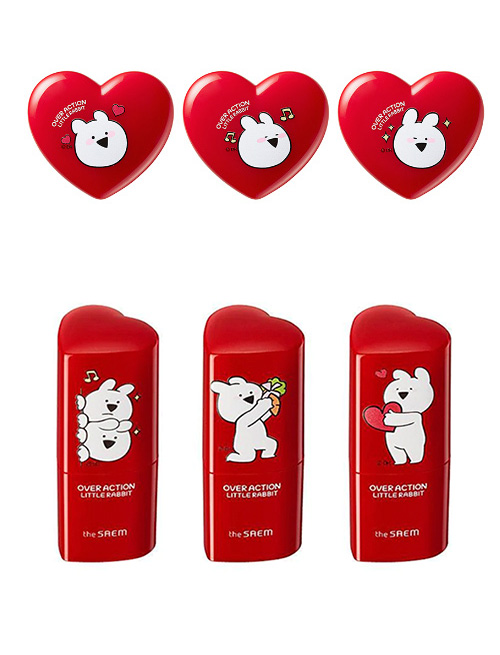 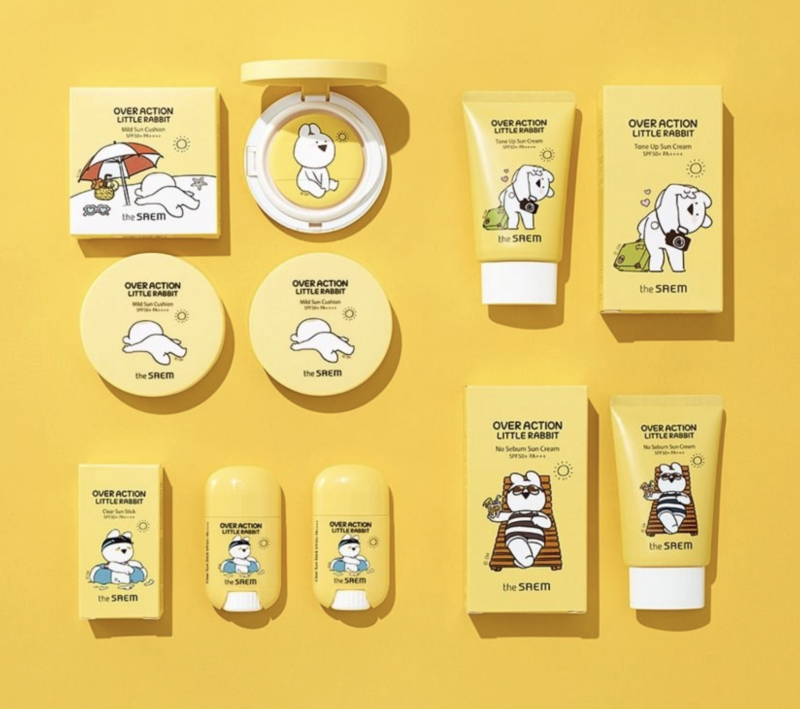 While Over Action Little Rabbit has garnered several other collaborations and a pop-up cafe in Japan, the character's popularity seems to have peaked in 2018.

Overall, I'm kind of in awe of how many bunny characters there are and pleased that K-beauty brands seized the opportunity to put them on their packaging. I'm suffering from collab fatigue at the moment - several American companies have been recycling the same old licensed characters/brands ad nauseum - so looking back at previously released ones that haven't appeared on the packaging of at least 4 different makeup brands was refreshing. Plus, it was great to learn about cultural touchstones outside of the U.S. such as Miffy and Kakao Talk stamps. Speaking of which, stay tuned for makeup collabs featuring Kakao Friends, LINE Friends and BT21. ;)

What do you think? Which little bunny is your favorite? As precious as these are, I would love to see a Velveteen Rabbit themed collection. (Incidentally, the book just turned 100!)