On average, the Museum receives one inquiry a week. It doesn't seem like much, but if it's something that can't be identified easily or a broad question about historic trends, they can take up quite a bit of time. Here are a handful of inquiries I worked on over the past year or so.

First, we have some questions about wartime makeup. One of the Museum's Instagram followers asked about this lovely set she had purchased on eBay. She suggested it may have been a kit provided to service women during the war. 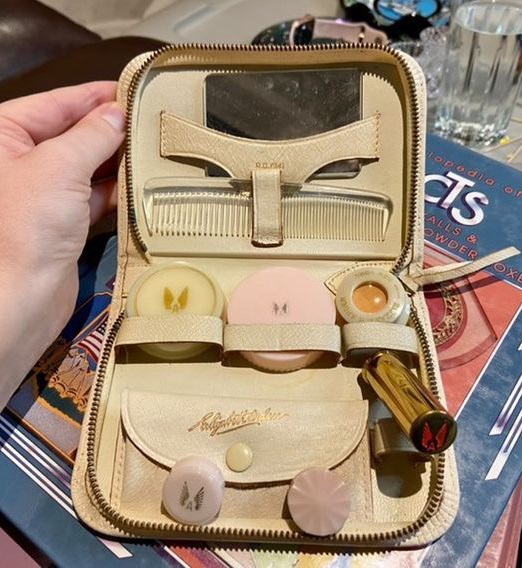 The following week, by pure coincidence, another person got in touch with an identical kit in red. 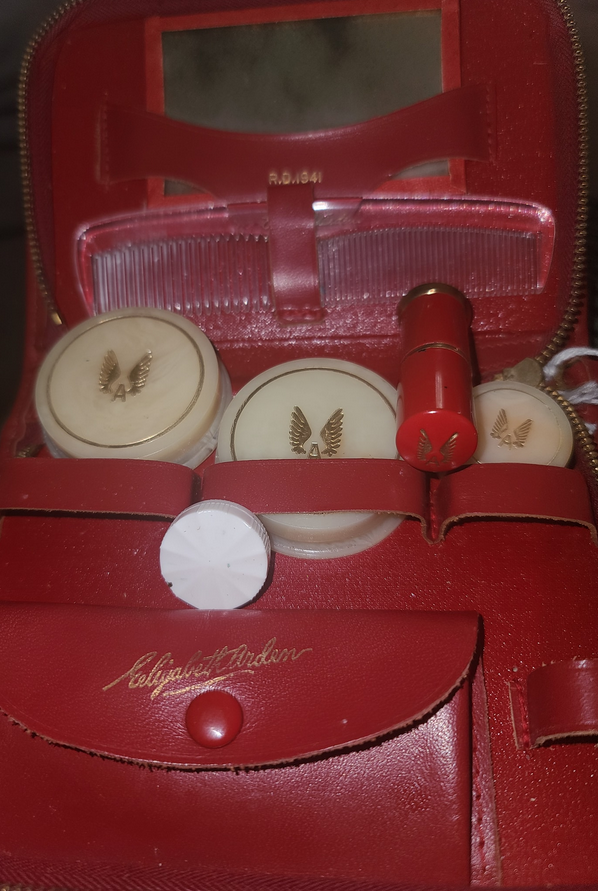 As it turns out, the hunch from the tan kit's owner was spot-on: this is Elizabeth Arden's service kit, which dates to about  1939-1956. I don’t think the company provided them for free, but it seems like the kit with Stop Red was recommended specifically for the women in the Auxiliary Fire Service in the UK, at least initially. A book called the Home Front Pocket Manual contains an excerpt from the Nov. 1939 issue of a British publication called Britannia and Eve, and it mentions the set. The kit was sold in Canada starting around 1942 and continued to be sold there into the 1950s, but was advertised just as a regular travel kit for the “busy” woman, not service women. It also looks like the red leather was not available until 1942. In any case, it's a compelling piece of wartime women's history - kits were actually created to help women adhere to the "beauty is your duty" motto. 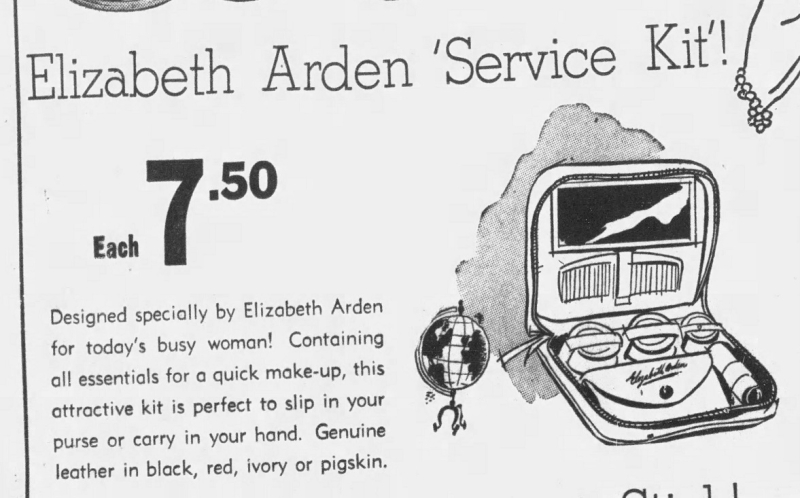 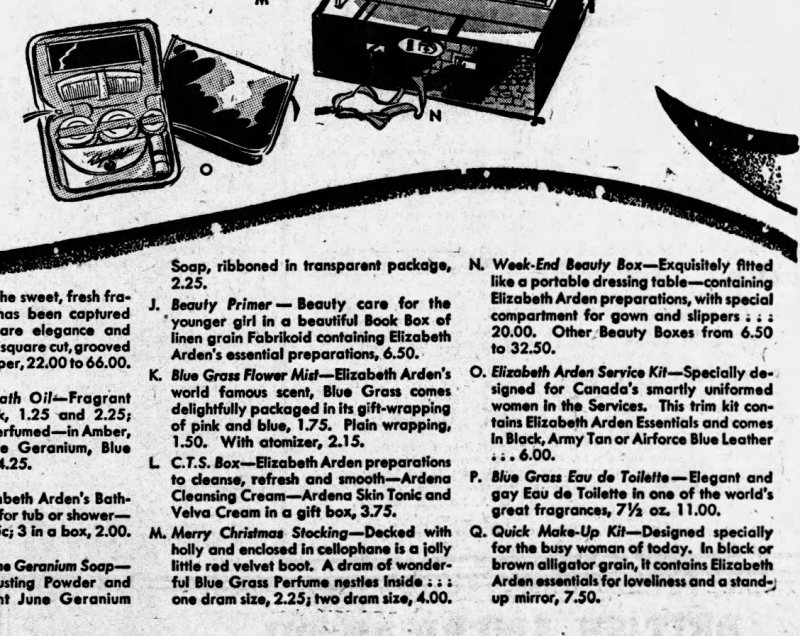 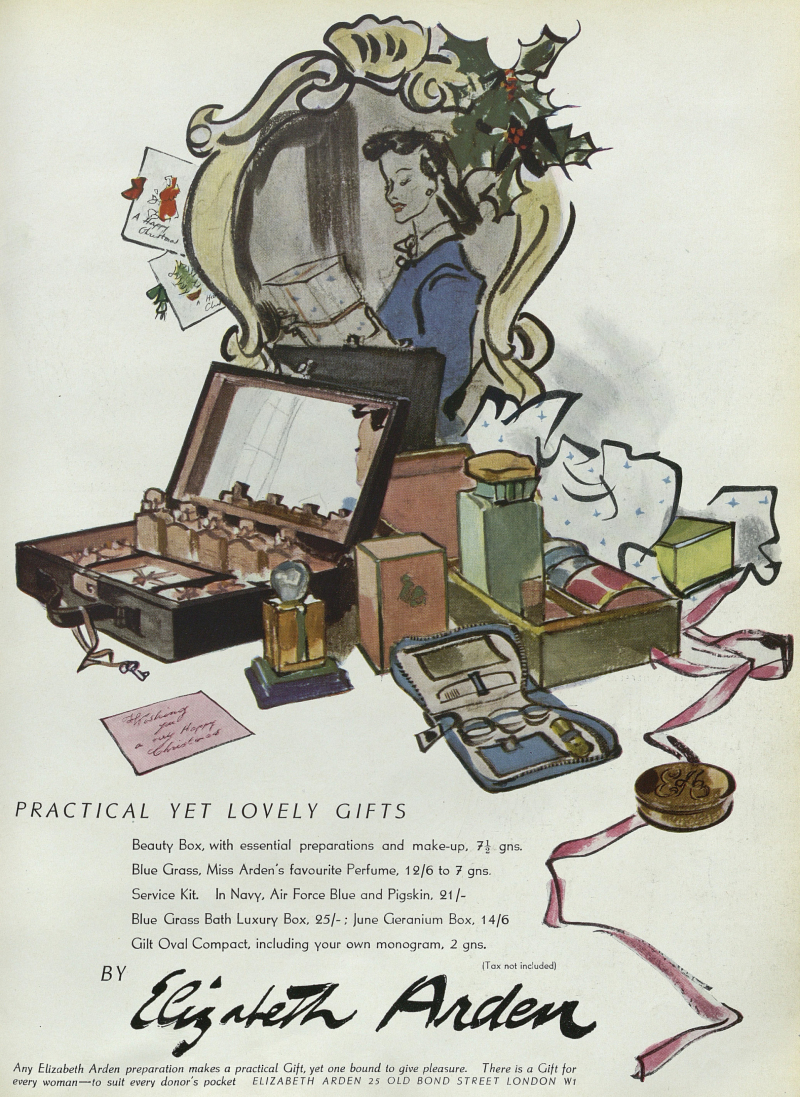 So this was mostly solved...except for the number that appeared on both kits. If anyone knows what "R.D. 1941" means please get in touch. The only possibly relevant thing I found was "Reserve Decoration" which is an award for the Royal Navy Reserve in the UK, but it doesn't seem like that would be appropriate to put on this particular kit. 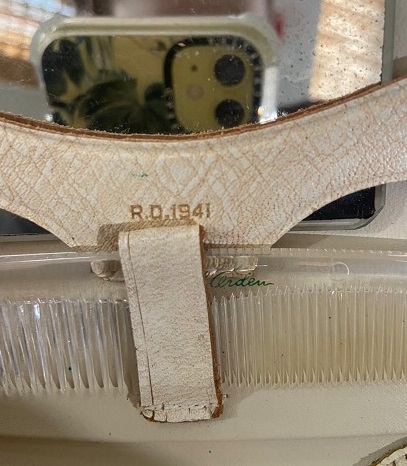 Next up, a vintage enthusiast and YouTuber, Katie May, asked about the use of gravy browning as leg makeup during the war. As silk and nylons were scarce, liquid leg makeup was sold as a substitute for stockings. 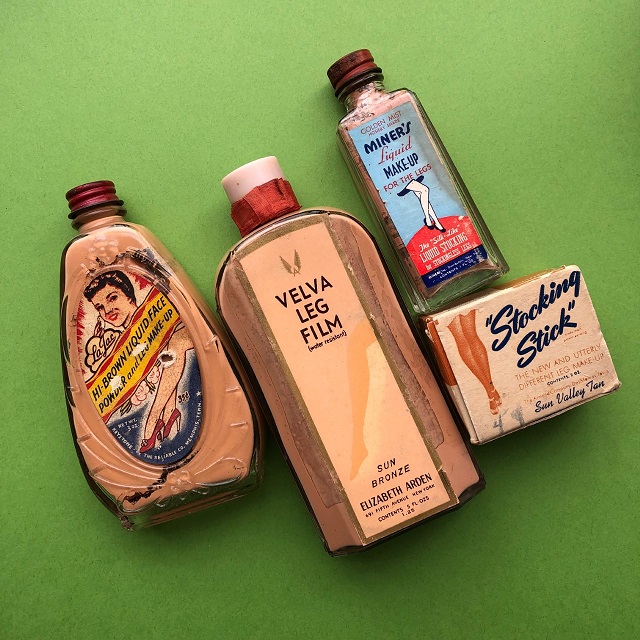 But in the UK, where shortages were even more dire and cosmetics prohibitively expensive, more women tried to DIY liquid stockings through a number of substances. According to some sources, ladies tested out a bunch of things to mimic the look of stockings. Along with gravy browning, cocoa, wet sand, tea, iodine, walnut juice and brown shoe polish were all experimented with. Katie wanted to know how the gravy was applied and whether it was a widespread trend. I'm afraid I couldn't turn up much concrete information given the limited access I have to resources, not to mention I know very little of where to begin looking for sources on WWII history in the UK. This BBC archive provides a brief 1st person mention of the stockings, but my findings consisted mostly of newspaper snippets and book excerpts, which may not be reliable and don't provide exact figures as to how many women were actually partaking in the practice. 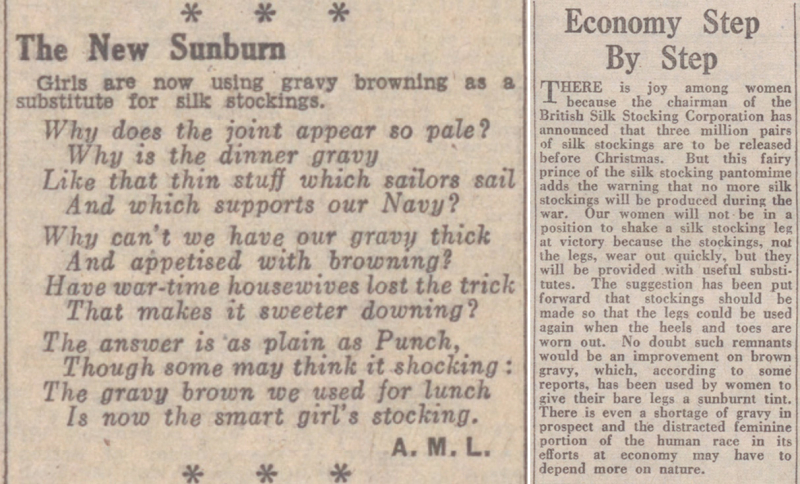 So it's really difficult to say how widespread DIY leg makeup was, at least on a regular basis. It must have been so cumbersome to mix and apply, and it definitely was not waterproof. Even the expensive pre-made leg makeup sold by cosmetic companies were not necessarily waterproof formulas despite their advertising. The gravy browning in particular was rumored to attract dogs and flies. 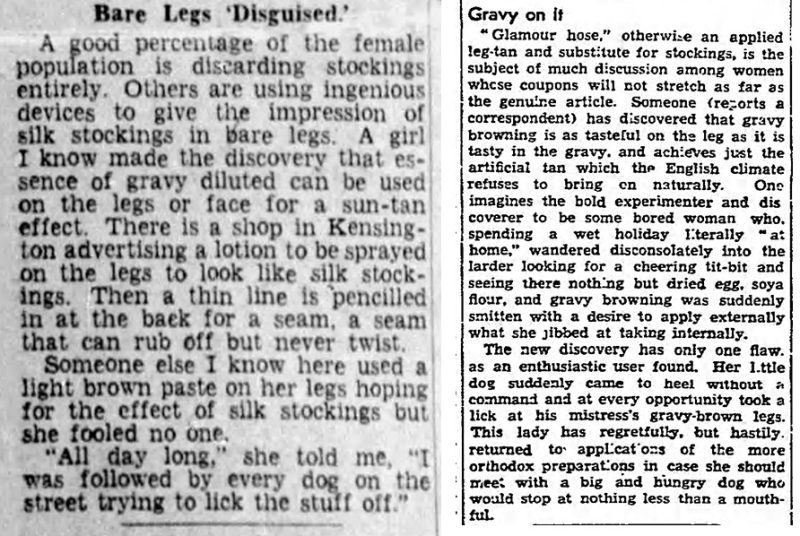 I can't envision women applying it themselves or going to the leg makeup "bars" to have others apply it every day, but maybe they did. It was a very different time; one woman remarked that it was "embarrassing" to go without stockings, so perhaps the social stigma was strong enough to force women to try DIY alternatives, and the cosmetics shortage in the UK was a lot worse than in the U.S.  As for face makeup, the same ideas apply - I'm skeptical of how widespread DIY makeup was, but it seems most women in the UK could not afford cosmetics during the war even if they were readily available (which, again, they weren't...lots of shortages. While the UK government believed that cosmetics boosted morale so they didn't completely stop producing makeup, it was still difficult to obtain.) I must point out that men enjoyed making fun of us silly, shallow women's efforts to keep up with the constant societal expectation of beauty. And of course, they always had it worse. I can't roll my eyes hard enough at these clippings. 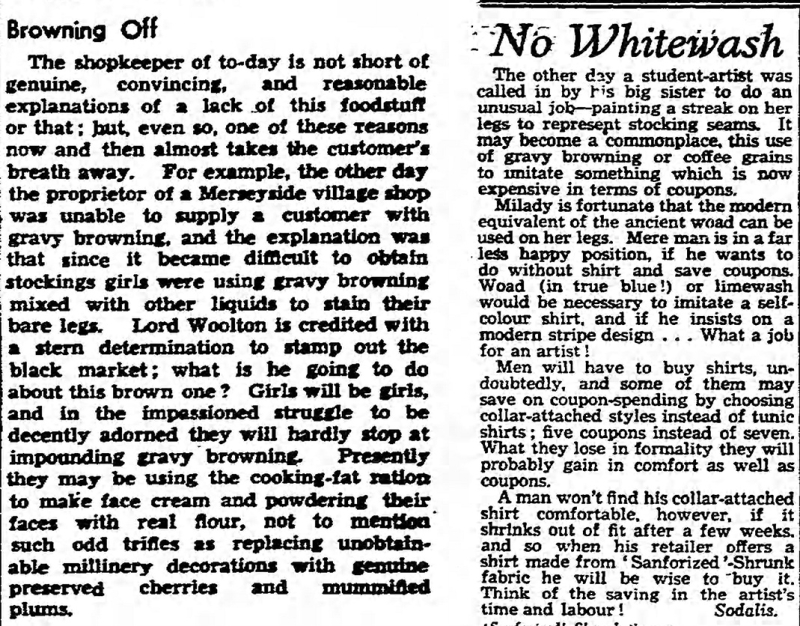 In any case, some sources state that beetroot juice was substituted for lip makeup and blush, shoe polish or soot (!) for mascara, and starch for face powder (NOT flour, as proposed by the sexist windbag above). Some women melted down whatever was left of their existing lipsticks and mixed them with Vaseline to make a balm. The two sources I found to be most useful on DIY makeup were 1940s Fashion by Fiona Kay and A People's War by Peter Lewis. Madeleine Marsh's book Compacts and Cosmetics (p.124) and Geoffrey Jones's Beauty Imagined (p. 136) also have brief mentions of DIY wartime makeup. Finally, I also recommended to Katie that she reach out to Kate Thompson, who has written several historical fiction novels about women who worked at the Yardley cosmetics factory in the UK during the war, and my understanding is that she's done quite a bit of research into WWII makeup. Anyway, Katie bravely tried out the gravy browning and a bunch of other homemade wartime beauty substitutes! Kudos to her for re-creating these unusual and rather messy cosmetic practices.
Next, an antique store owner asked about some old cosmetics sales kits by the name of Velens that she had come across. I didn't turn up much on the brand's products, but here's what I was able to find. The company was founded in 1930 by a Swedish ex-pat named Leo B. Selberg. Selberg had a background in chemistry and previously worked for Luzier, another cosmetics brand at the time. The Velen's Educational Cosmetics name was copyrighted that same year, as well as something called "Paul Velen's Color Harmony Chart". As it turns out, a man by the name of Paul Velen (based in Kansas) had actually come up with all the formulas prior to Selberg's involvement. The relationship between Selberg and Velen isn't clear; however, from newspaper clippings it seems that before moving to Missouri, Selberg socialized frequently with an older brother of Paul, A.R. (Reuben) Velen, so I'm assuming they knew each other. Paul also had a degree in chemistry, although what inspired him to start a beauty business remains a mystery. Maybe Leo approached Paul about being the owner of the business while continuing to sell under the Velen name and keeping the formulas, but it doesn't seem like either of them were too involved/hands on with the line. Selberg sold Velen's in 1959 to a company called Greer and Associates, but I couldn't find any mention of Velen's Cosmetics after 1955 so it may have been on its last legs by that point anyway. Paul Velen died in May of 1969 at the age of 68; Selberg in 1979 at the age of 83. There was also a man named Albert Colborn who served briefly as Chairman of the Board of Velen's Cosmetics from 1930-1933 and started his own beauty company called the Modernistic Beauty Service in 1933, but I couldn't turn up much about him other than his obituary. 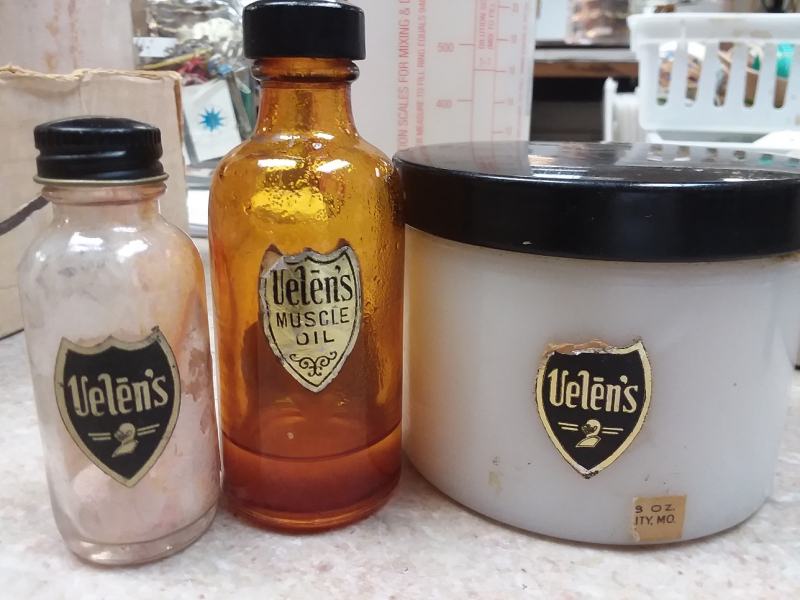 Anyway, the Velen's line wasn't used for training at beauty schools but rather for demonstrations in salons to sell to salon customers. In fact, it was almost exclusively sold in salons with some direct sales (door-to-door/traveling) agents, not in department or drug stores. The "educational" part of the name meant that beauty salon employees would "educate" their clientele on the best products for them and how to apply them. It looks like it was sold primarily in the Midwest and Texas, with some salons as far away as California and New Hampshire, which is why it's a little surprising there aren't more records or product photos. So this was quite a find and an interesting tidbit. 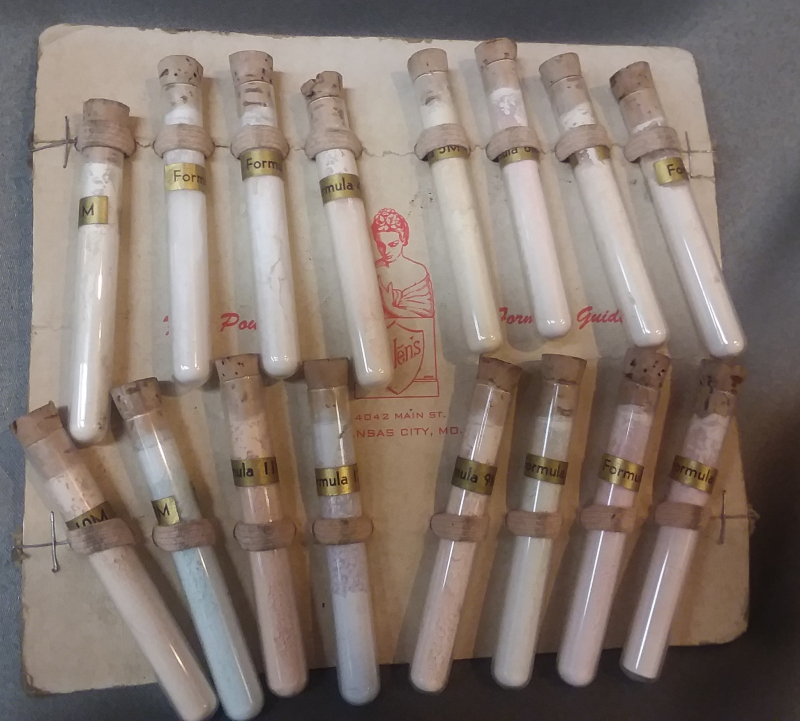 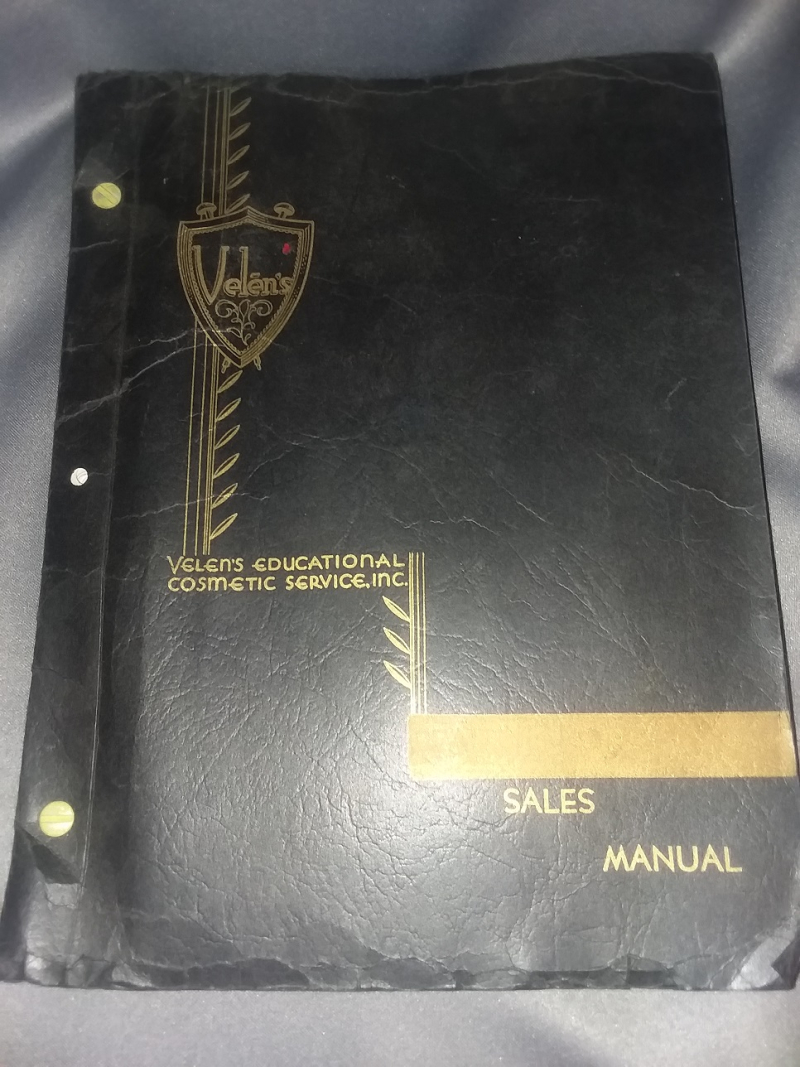 Skipping ahead to the late 1950s, the Museum received a few questions about Helena Rubinstein's Mascara-Matic. First, someone sent in a box with some adorable packaging, which was released for the holiday season in 1958. I couldn't find a magazine ad, but there were a couple of newspaper ads. A year later Rubinstein released another holiday edition of Mascara-Matic with a Christmas ornament design on the box. As far as I know the "harlequin" style in the photos sent in to the Museum was only released in 1958, and it doesn't seem like Rubinstein released any other holiday edition boxes of Mascara-Matic except for 1958 and 1959. 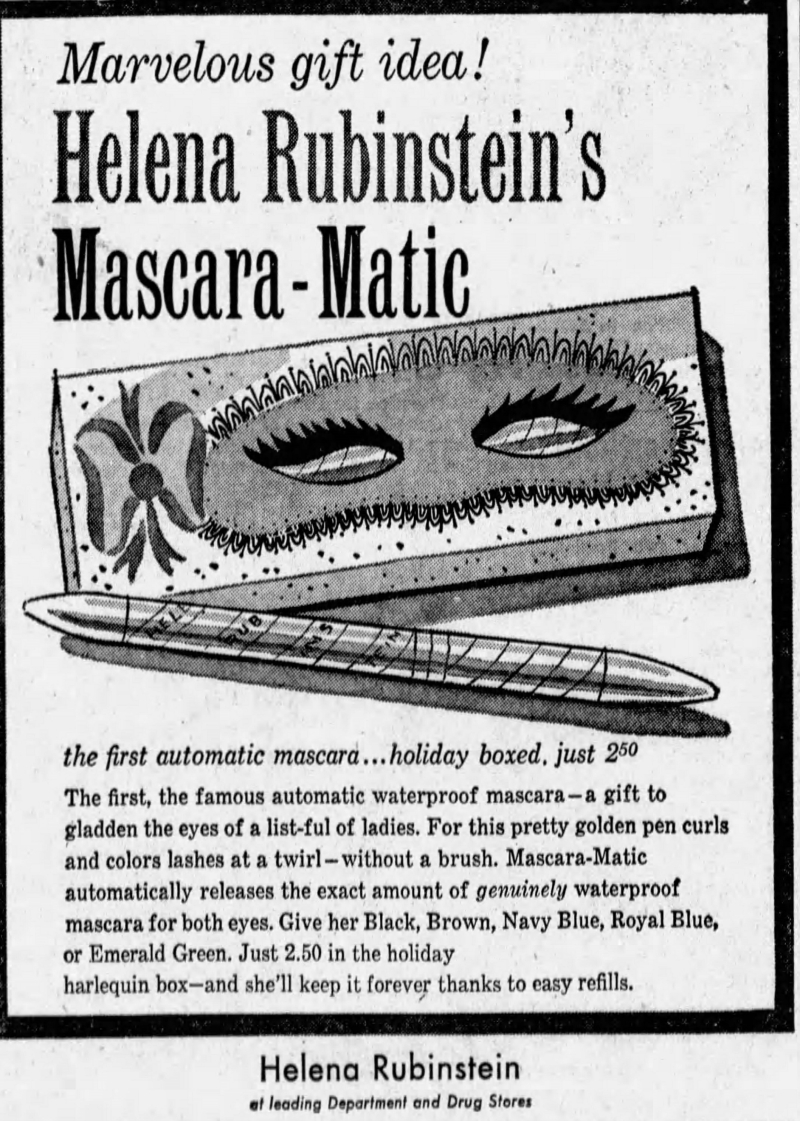 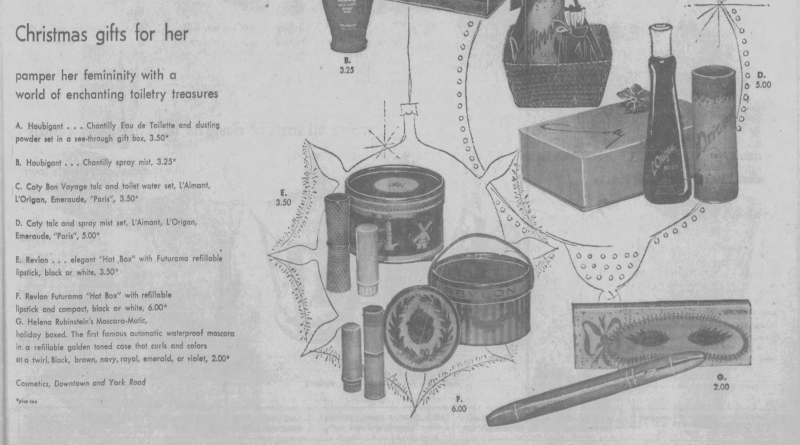 Then another person wrote in asking about the value of an original Helena Rubinstein Mascara-Matic, believing that the one she had found was from its first production run and worth a whopping £3,000 according to this Daily Mail article. It's hard to say with certainty whether any Mascara-Matics are from the first run. Perhaps those had the patent number and everything after that was marked "waterproof" or did not have any markings around the middle. However, the one I purchased for the Museum has the patent number but also came with a refill, and refills were not sold until 1958, a year after the mascara's debut. Even if the one the person had was original, it's not clear where the figure of £3,000 comes from. The Museum does not do valuations, but I will say Mascara-Matics, either with patent numbers or marked "waterproof" typically sell for about $50 so I can't see an original being worth 60 times more, unless there was proof it belonged to a celebrity or something like that. There was also a listing for one with a patent number at eBay - from what I can tell it was unsold with a starting bid of £49.95. If it was in fact sold, again, I can't see it going for £3,000 even in mint condition. 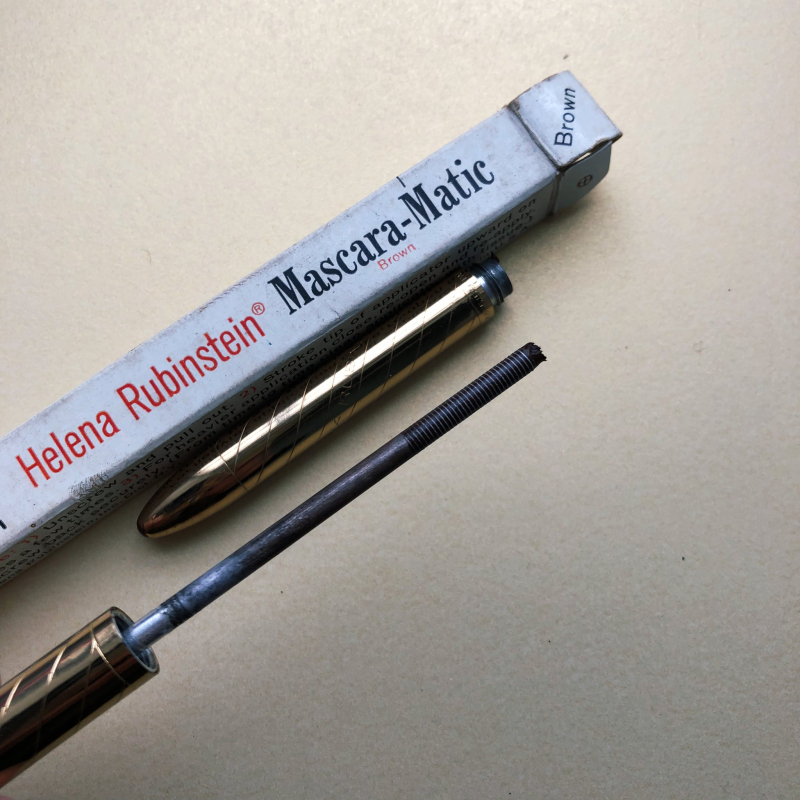 Lastly, another vintage store owner inquired about a skincare kit sold by blender brand Osterizer. (There are larger photos of the jars at Etsy.) 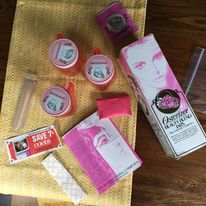 Based on the coupon included in the photo and some newspaper ads it was sold between 1971 and 1975. It looked like quite the gimmick. There wasn't a ton of information on it, but it seems Oster was trying to cash in on the "natural" cosmetics trend of the late '60s/early '70s and sold these kits for those who already had a blender and wanted to make their own organic skincare with fresh ingredients. 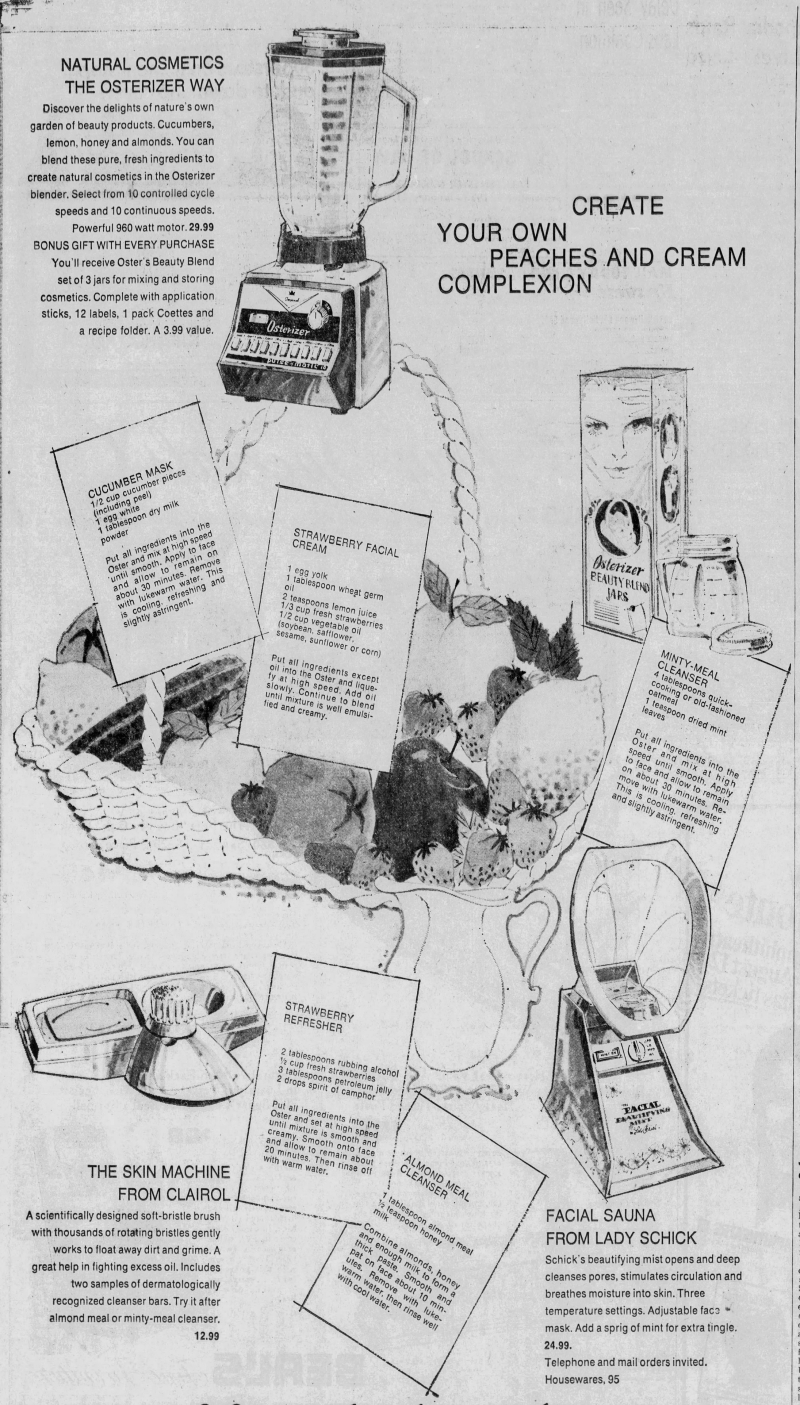 But who really needs brand name pink jars and labels for homemade cosmetics? One could go to any craft store and get their own supplies. And while Google didn't exist back then, the recipes would have been pretty easy to find as well. I'm just a bit astounded at what they were trying to sell, as it really seems to be a cash grab. Anyway, it's a fascinating bit of beauty history and definitely an expression of the era.
Which one of these were you most intrigued by? While I'm not the best at solving makeup mysteries I do enjoy receiving them, so please don't hesitate to send any objects or questions to the Museum!