Here we go again! I was not nearly as productive on blog posts and exhibitions as I had hoped in 2021, but that was due to some behind-the-scenes things going on - namely, making the Museum a nonprofit organization, writing a land acknowledgment and developing a diversity report card (which is coming soon!) I must preface the following exhibition and blog topics by stating that there will be more behind-the-scenes things going on in 2022, so it will be even quieter than in 2021.

I won't bore you with the details, but I've made decisions about two major initiatives that have been rattling about for years: collections management software and overhauling the website. Since I can't hire a professional to help with either of these massive tasks, they will be very slow going and will require cutting back on blog posts and exhibitions (and honestly, I wouldn't be surprised if the website is exactly the same 12 months from now.) My goal is to curate one exhibition and however many blog posts I can manage - I'm hoping for 20-30, but even that seems very ambitious.  So with that, let's take a peek at the topics I have brewing.

In an effort to narrow down the amount of exhibition ideas I have, last year I came up with a priority list of topics that might be doable in 1-5 years (if the Museum is still in existence) and a secondary list for ones that are not quite as high priority. The descriptions are basically the same as last year and I hope to think of better titles. Once again the husband came up with handy graphics. The first four are new ideas I came up with in the past few months, so feedback is greatly appreciated in terms of how they rank in relation to the others. Also, while I plan having people assist in specific parts of exhibitions, i.e. writing the introduction or an essay on one aspect of the topic, there are four exhibitions I absolutely can't take on mostly by myself. Whether they're a group effort or involve just one other person, co-curation is necessary. It will be difficult to get co-curators, however, given that it would be a volunteer (i.e. unpaid) effort. So while these exhibitions are included in the priority list, none of them will be the 2022 exhibition as it will take time to find funding or someone who will co-curate for free.

And here are the blog posts.

MM Musings (1-2): Really want to write about museum accessibility and how museums can be agents of social change. Those topics are huge so it'll probably have to be one or the other.

Makeup as Muse (3): I'm so ashamed I didn't get to a single Makeup as Muse in 2021. On my shortlist: Sylvie Fleury, Rachel Lachowitz, Asa Jungnelius and Tomomi Nishizawa.

MM Mailbag (2-3):  The MM mailbag overflowed yet again in 2021 and they took a considerable amount of time to research and respond. We'll see what I can get around to sharing.

Vintage/brief histories (4-5): I still want to go ahead with histories of powder applicators, setting sprays and maybe colored mascara, color-changing cosmetics and how makeup language has evolved (for example, why we typically say "blush" now instead of "rouge" for cheek color.) The author of Cosmetics and Skin kindly suggested an article on copycats, i.e. how companies clearly ripped each other off and continue to do so today in terms of packaging, ad campaigns, etc. which is a great topic.  I'm also interested in a history of Day of the Dead makeup, and the Museum's Revlon Futurama post got me thinking more about the idea of makeup as jewelry. I still need to finish the series of Dorothy Gray ads featuring portraits of well-to-do "society" ladies, and I'd like to pursue wear-to-work makeup from the 1970s-90s, histories of defunct brands (a bunch of celebrity lines, Diane von Furstenberg, Halston, Ralph Lauren, Benetton, Calvin Klein, Tommy Hilfiger, Nina Ricci and Inoui ID, and revisit Stephane Marais), especially Black-owned brands like Naomi Sims and Rose Morgan. I still want to write something about Black salespeople and customers in direct sales companies, i.e. Avon, Mary King by Watkins, Fuller, Artistry by Amway, etc. but given that it could be an entire book I'm not sure how much I'll be able to do on it. Finally, in 2021 I became quite fascinated with paper mache lipstick holders so hope to work up a history of those and other doll-inspired lipsticks in general, along with profiles of some more obscure makeup artists from the '60s through the '90s, and a feature on makeup ad illustrators. Whew!

Trends (1):  Makeup brand merchandise and swag - another I STILL didn't cover in 2021 as planned. I'm also very interested in the video game trend in makeup, but I'm hoping this amazing person writes about it instead!

Topics to revisit (1-2): Same as last year, sadly, since I still did not tackle them: faux freckles, non-traditional lipstick shades, and cultural appropriation in cosmetics advertising. Also, perhaps a deeper dive into surrealism and makeup.

Artist collabs (5):  Yes, still trying to catch up on some of 2020's holiday releases, including Fee Greening for Mikimoto and Cecilia Carlstedt for Bobbi Brown. There was also a beautiful surprise Japan-exclusive holiday collection from Clé de Peau, who teamed up with Charlotte Gastaut.  There are tons of other collabs from previous years that I'm still thinking about, such as El Seed for MAC, Connor Tingley for NARS, the Shiseido Gallery compacts and lip balms, and a series on the artists whose work appears on Pat McGrath's packaging. There will a few surprises too. ;)

Book reviews (2-5):  So. Many. Books. The speed reviews I did last year were fine, but I want to do more of these and also maybe return to more in-depth reviews.

Dream Teams (1-2):  I really thought I would do at least one more of these in 2021, but I did exactly zero. I especially want to focus on BIPOC artists and flesh out the idea I had back in 2016 for a Rrose Sélavy-themed collection.

Color Connections (1-2): I returned to Color Connections last year with a vengeance, and made good on the idea to create an entire Instagram account for them. So expect a few here from time to time. :)

Miscellanous: a feature on new Chinese beauty brands and some kawaii collections like Kakao Friends and others. And of course, keep plugging away on individual bits and pieces for the '90s book.

Speaking of which, the book ideas are the same as last year. The first and second ones are the accompanying catalogs to their respective exhibitions. The last one is the coffee table book, which I'm tinkering with to make it more diverse. 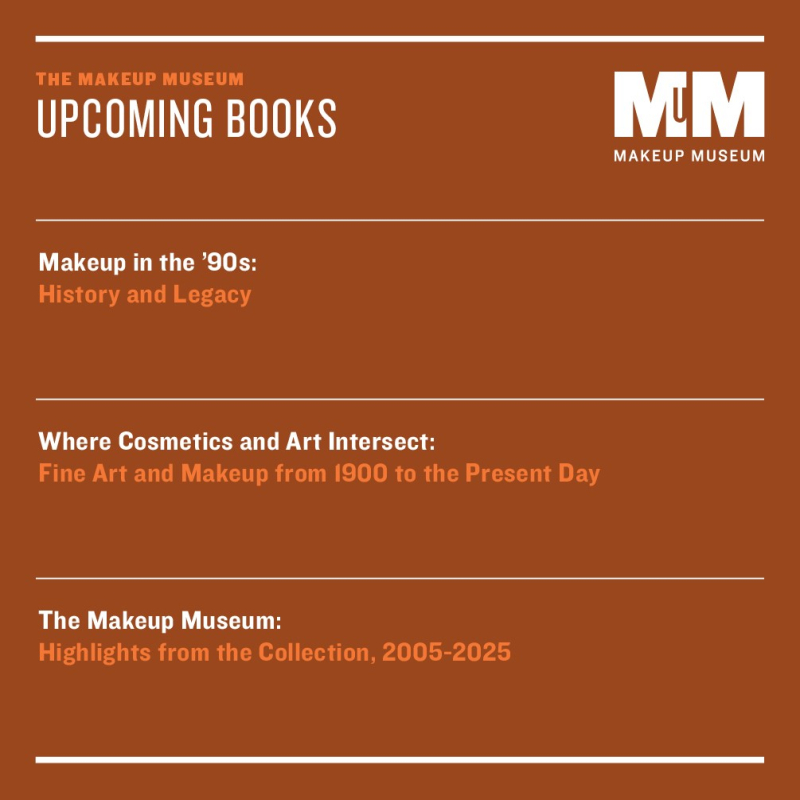 So it looks like the Museum has its work cut out for it! What exhibitions and post topics are you most excited about?