With gratitude: donations from 2021

As in years prior, the Makeup Museum received some incredibly generous artifact donations in 2021. The Curator is so very grateful to everyone who believes the Museum is the right home for these objects. Most of these beauties were donated by the Museum's Instagram supporters...as much as I despise Instagram at this point, there are some really nice people on there with whom I've had the good fortune of connecting.

First up is a spectacular Paloma Picasso lipstick from the very talented and sweet @Sarahjeangirl. It has the original box and it's so fabulous! Paloma Picasso's line is also pretty rare, so I was elated a piece of it is with the Museum now. I hope to write something about this brand along with many others from the late '70s and early '80s. 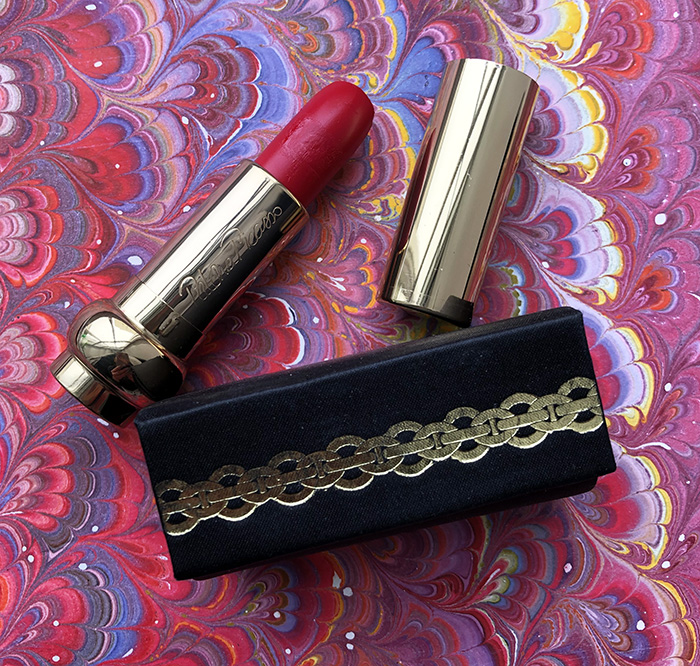 Speaking of which, I went down quite a rabbit hole in fall 2021 trying to find information on Diane Von Furstenberg's various beauty endeavors. I discovered that she had not one, not two, but three beauty lines throughout her career. This brand new lip gloss set was donated by the wonderfully supportive Nita and dates to about 2003. I was so thrilled because despite the fact that DvF had tried expanding into the beauty realm three times, the objects prove rather elusive. And makeup from the late '90s/early 2000s in general is tough to find, so I was overjoyed to add this to the Museum's collection. 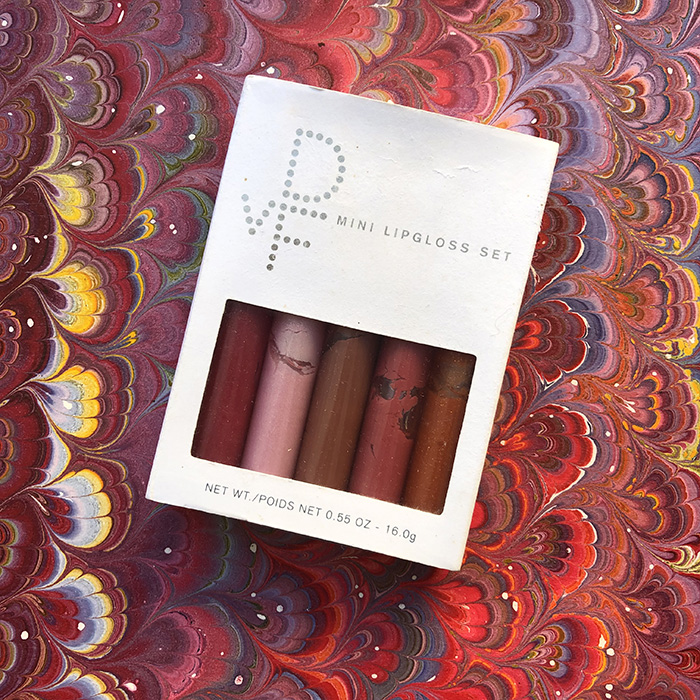 Next are some more contemporary artifacts from Sharon, a.k.a. @Metromakeupmaven. I had no idea Thierry Mugler had makeup until she offered to send me this gloss along with some other awesome items, including a blush from Chinese brand Catkin (love the bird print), macaron shaped sponges and cocoa blush from Kiko (you know my obsession with dessert-themed makeup), a cute little winking blush from Asos, and a L'Oreal x Isabel Marant highlighter. Can you believe this bounty? 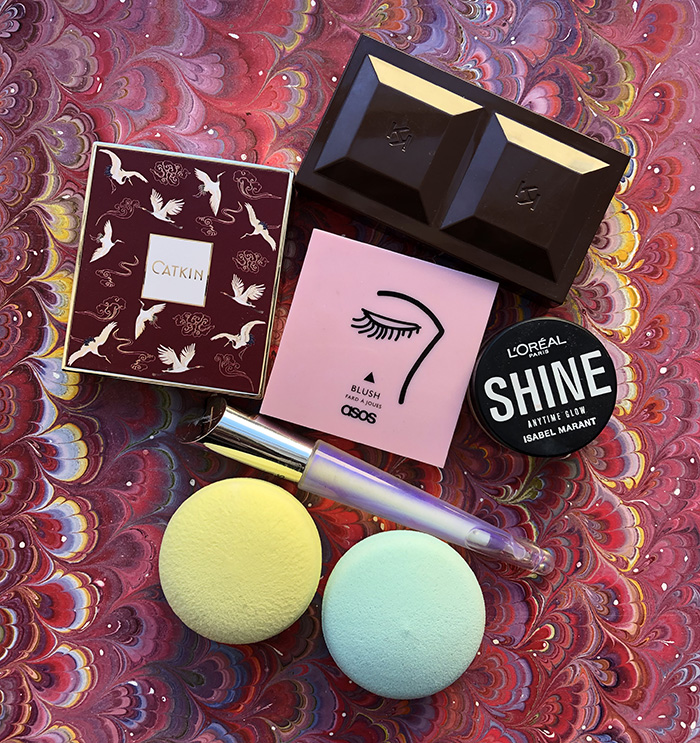 We also have yet more vintage makeup postcards and memorabilia from the lovely Carolina Masseo, who sent these all the way from Argentina! Once again I was blown away by her generosity. I love ads just as much as the makeup itself. 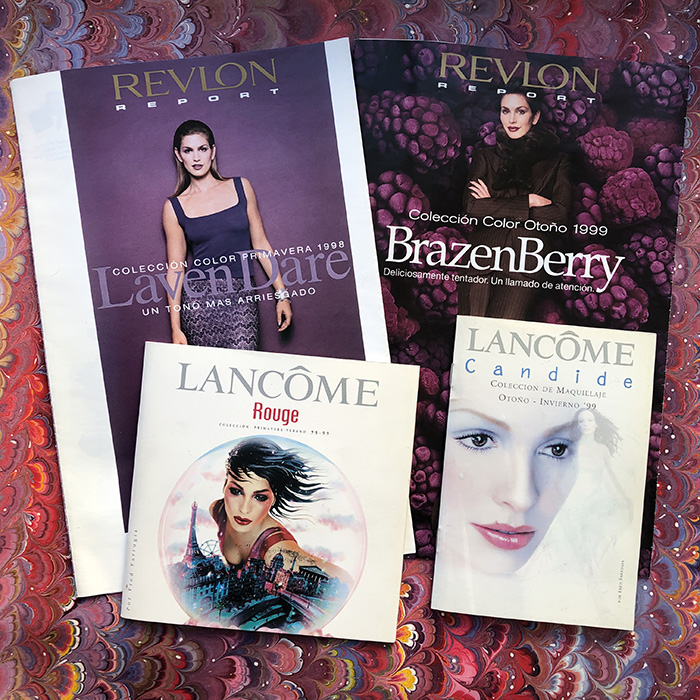 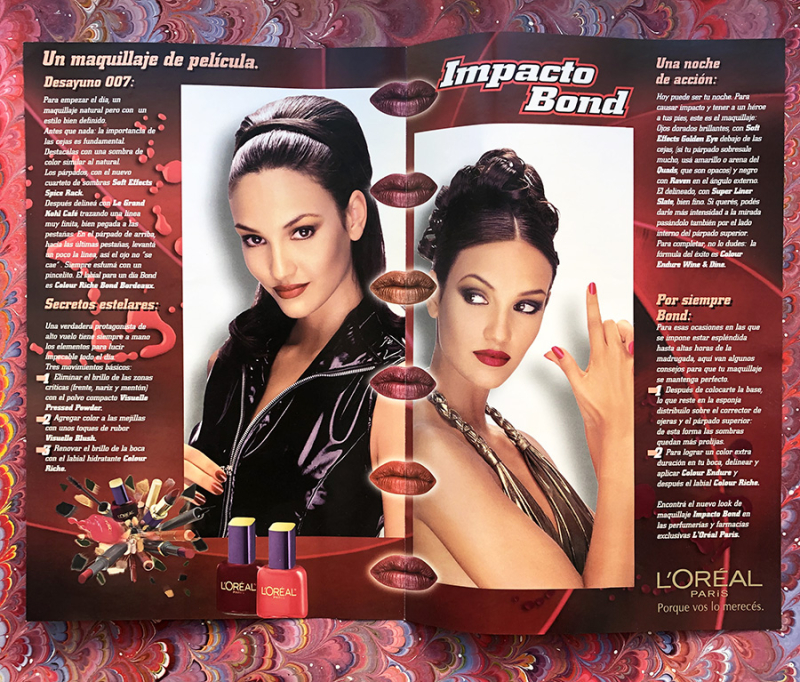 Another second-time donor is the awesome Caroline of @eye_wonder_eye, or as I call her, the powder box queen. She was paring down her extensive, world-class collection of powder boxes, so I purchased a few she had listed on ebay. Once she realized I was the buyer, she included some amazing objects for free. As with last year's donation I just about died when I opened the package! The rouges are the perfect addition to the Museum's blush collection, and the sphinx box label is particularly thoughtful as the Museum has the matching compact. Plus it'll look great in the Egypt-inspired exhibition. I was also ecstatic over the very old Sephora catalog! 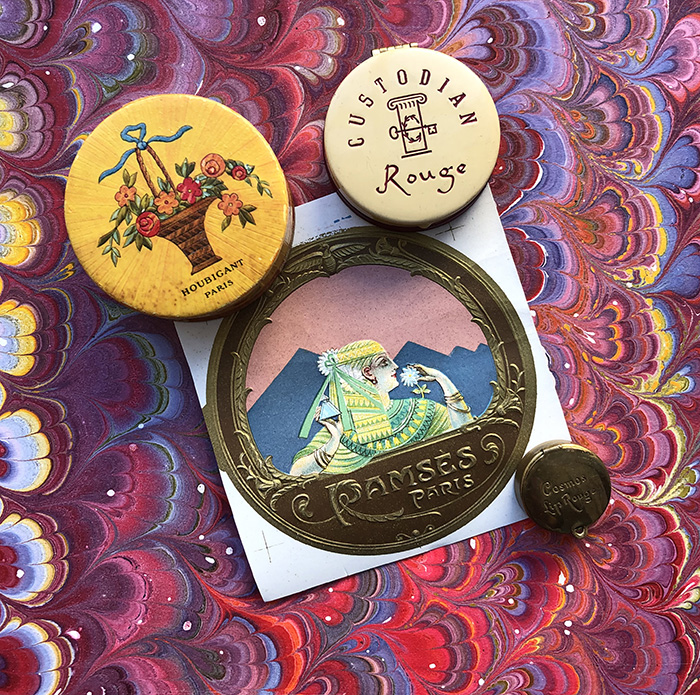 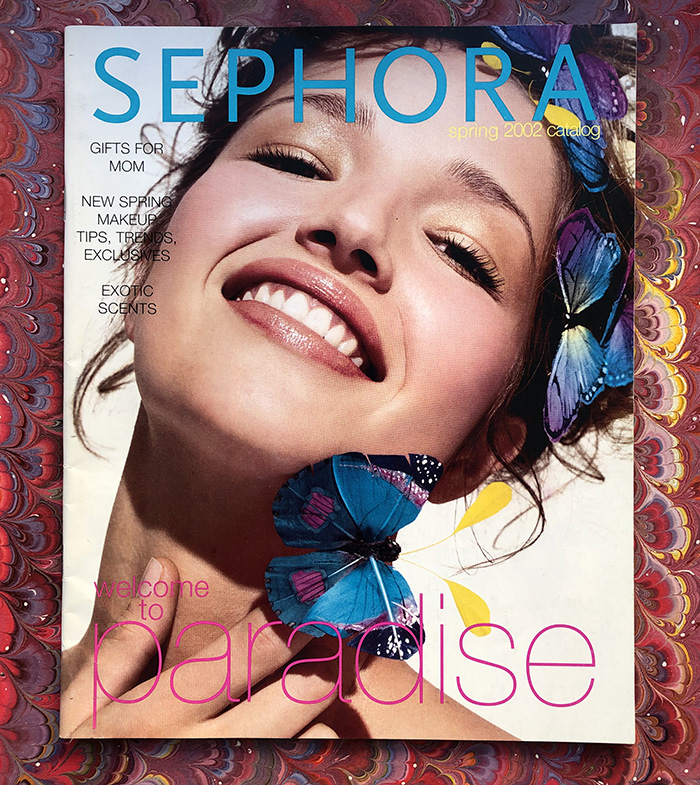 You might remember how much I enjoyed MAC's spring 2010 Liberty of London collection. I posted a picture of it in spring 2020 on Instagram reminiscing (and also not believing it was 10 years old at that point!) and the wonderful Jen of Coffee Sundays (and @tinypannation) mentioned she had a MAC Liberty poster she would be happy to send. The only issue was that it was located at a relative's house some 3,000 miles away and due to the pandemic she would not be traveling any time soon. Fortunately things had improved enough so that she could visit her family for the holidays in 2021, and she remembered - even after well over a year! - to find and mail the poster. Not only that, she included what we suspect is a hair tie and also some yummy candy, just because. How awesome is that?! 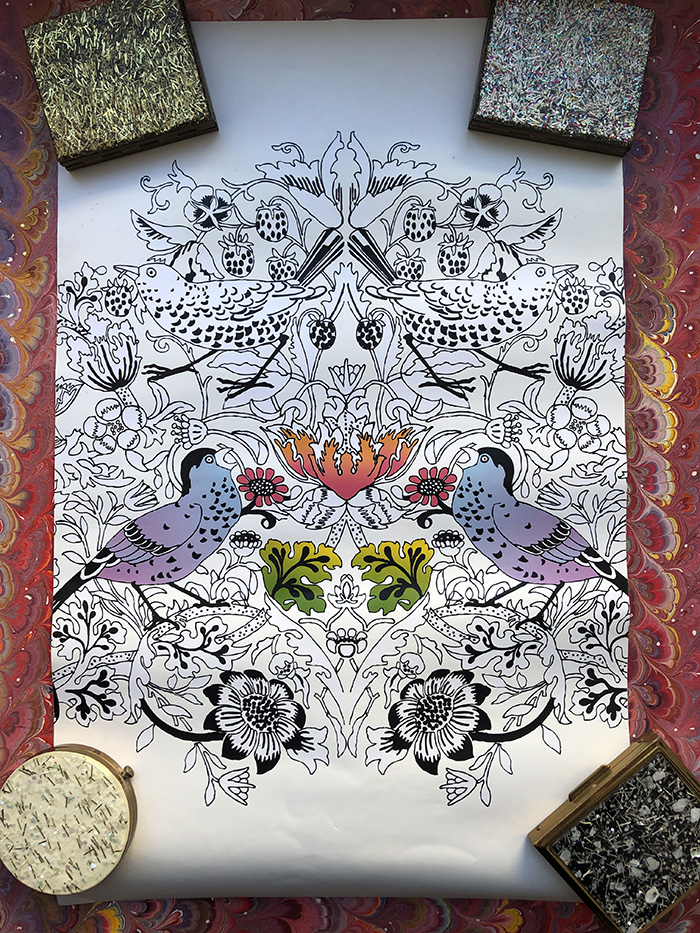 This box of vintage lipstick tissues is really special. The donor emailed and explained that a dear friend of hers, a woman named Bette, had passed away, and she thought it would be nice to donate the lipstick tissues Bette had collected. Because I'm always curious to try to get to "know" the people to whom these artifacts once belonged, I asked the donor if she could provide any information on Bette. And so she kindly included a detailed obituary and a brochure advertising Bette's pet portraits. She led a very interesting life and I'm so happy the Museum acquired her lipstick tissues and brief biography. 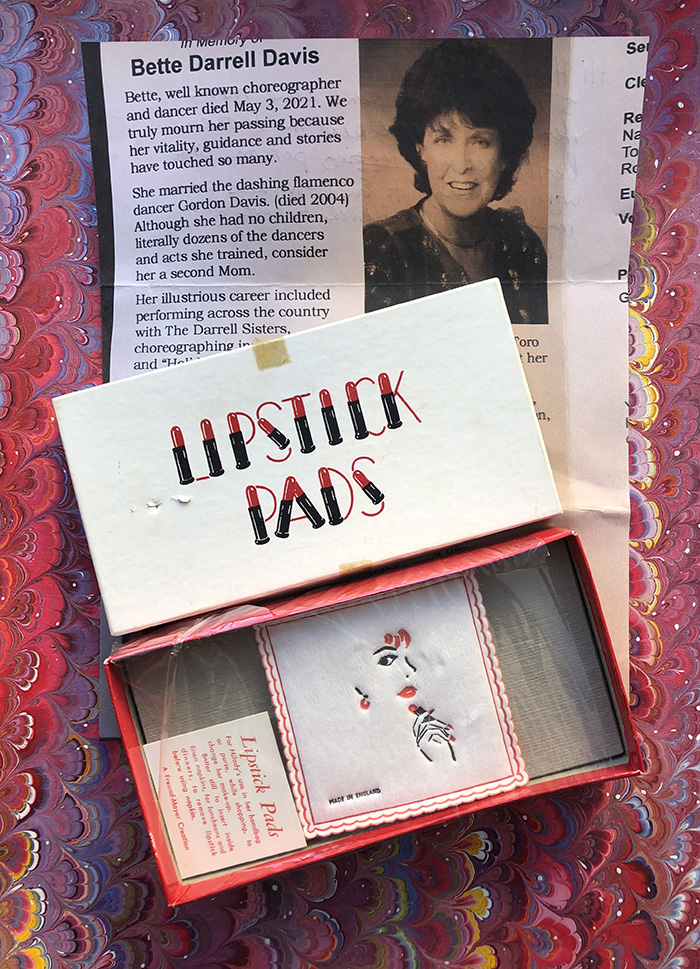 I was totally smitten by this gigantic NARS lipstick that bloggers received as PR even though, like similar PR packaging, it was pretty wasteful.  Turns out that wastefulness works in my favor, as the donor said they were cleaning out their office and had no room for something so huge, so they offered to give it to the Museum!  I was overjoyed they didn't just throw it out. Should the Museum ever occupy a physical space I think it would be smashing as entryway decor (and that's how I've placed it now. The green fellow to the left was my great grandmother's and is our guard dog.) As for the donor, they requested to stay anonymous so as not to get in trouble with NARS or have people bugging them for freebies, but I will say they are pretty famous. ;) 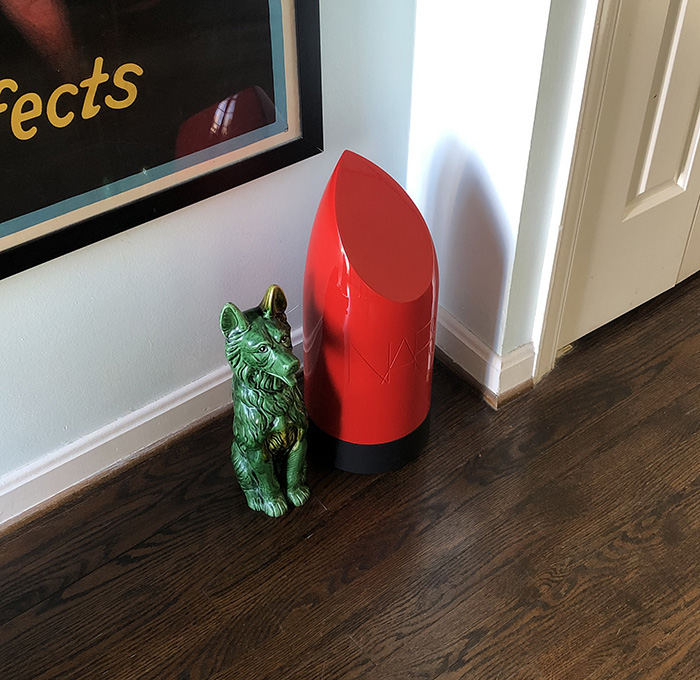 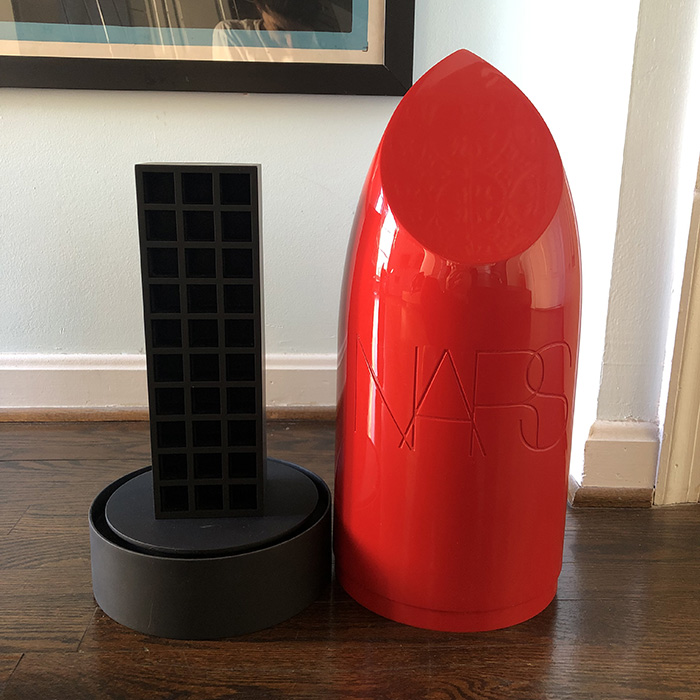 Another trip down memory lane: several years ago I wrote a Makeup as Muse post on local artist Gloria Garrett and remarked how much I liked her Mother and Child in the Park painting.  Last summer one of Gloria's friends got in touch and explained that, sadly, Gloria had lost her husband and was having some health troubles of her own, and that she had moved out of her house and studio to an apartment closer to her daughter. This friend helped clean out Gloria's house and found the Mother and Child painting. Thanks to Google she spotted my post on Gloria's work and in a truly stunning display of kindness, offered to send it to me completely for free. I was totally bowled over and so honored to acquire one of Gloria's makeup paintings. I'm still trying to find the perfect spot for it. I am also obviously thinking of Gloria and hoping she's doing better. 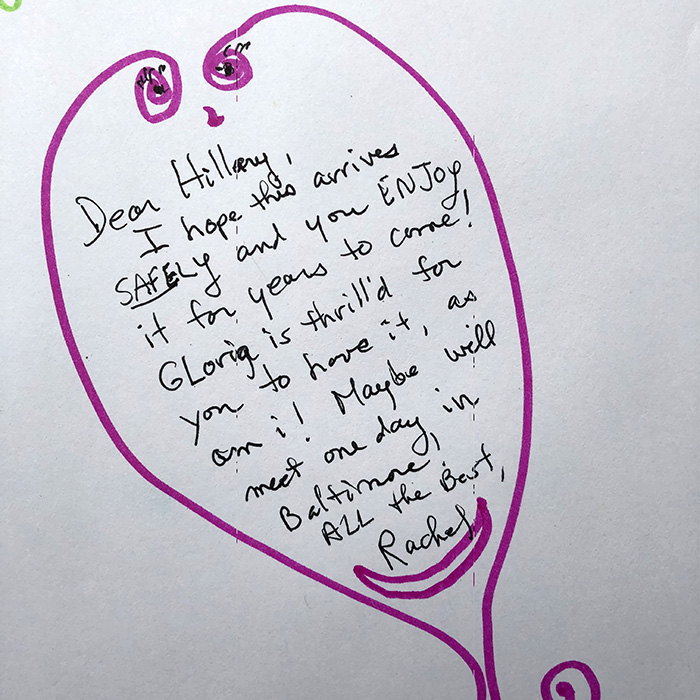 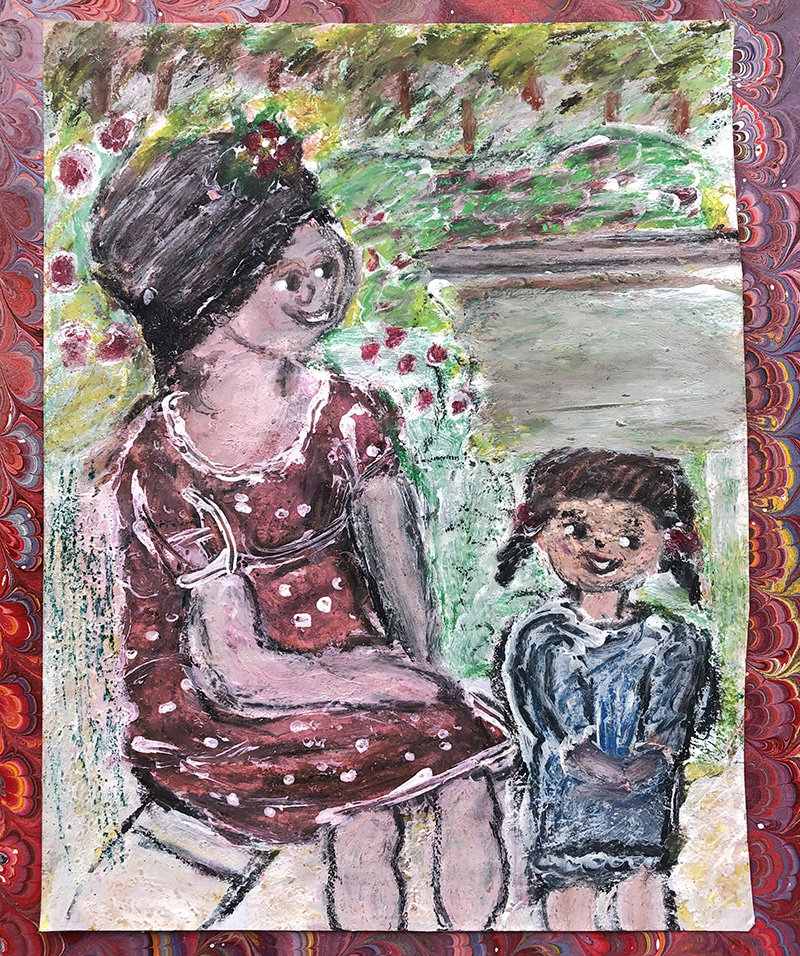 Last but certainly not least, I wanted to mention that the Museum also received a gorgeous vintage dusting powder box and an adorable children's dusting mitt, but embarrassingly, I can't locate them at the moment. Losing track of artifacts has been quite a problem recently and I plan on remedying that with proper collections management software. I did a ton of research and demos in 2020 and 2021 and I've found at least a temporary solution which I hope to implement this year.  Anyway, while the Museum tends not to collect bath and body products, I couldn't turn these away! Not much turned up on the Vida Ray dusting powder, but what I was able to find proved very confusing. Based on newspaper ads Vida Ray powder in the Gallivanting scent dates to about 1943-1949, but a dusting powder called Vita Ray was sold as early as 1934. The container that was donated lists both Vida with a d and Vita with a t, so what was actually the name? Vida Ray allegedly went out of business in 1948 and continued to sell the last of its stock in 1949, but there were still some mentions of Vita (with a t) in 1953. Pure speculation on my part, but it may have been fairly short-lived due to the fact that the company couldn't seem to agree on the spelling of its own name, as Gallivanting was advertised both with Vita and Vida Ray.  Maybe the company was selling Vita Ray in the early '30s and for whatever reason changed their product name to Vida while still keeping the Vita company name. In any case, I'm guessing that customer confusion may have led to the line's lack of longevity. 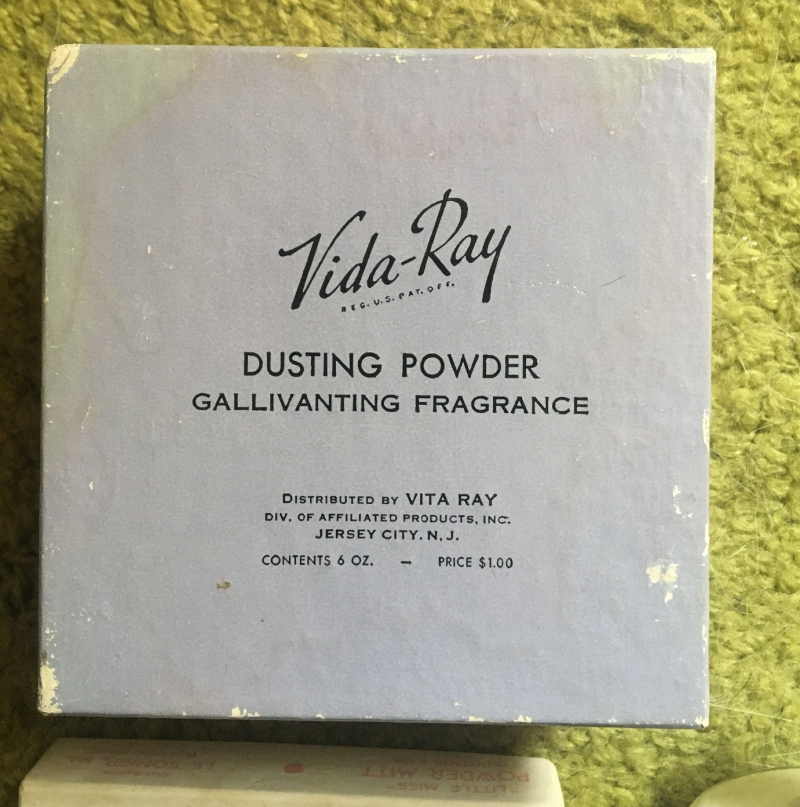 The "Little Miss" powder mitt dates to about 1950. Le Sonier produced these mitts starting around 1944, but it looks like they changed the image on the box to the one below by 1950. In 1953 it changed again, and that seemed to be the last mention of Little Miss I could find. 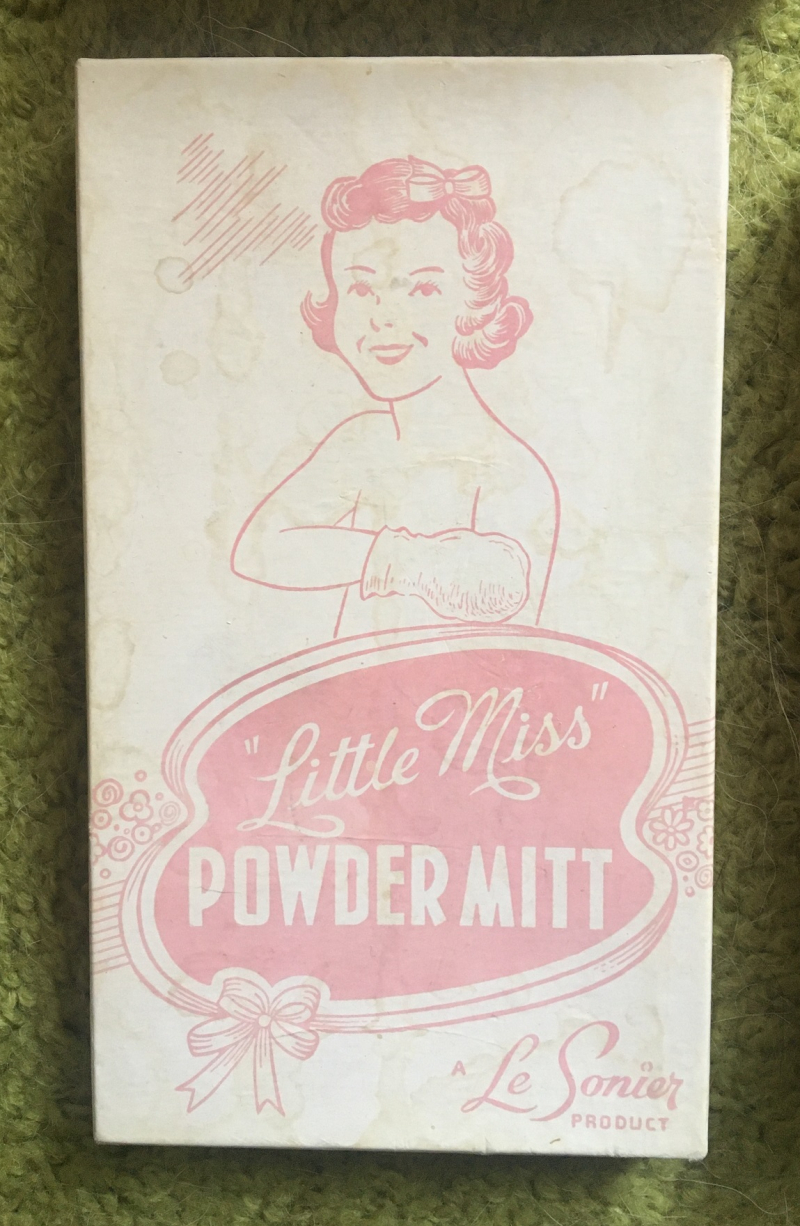 In conclusion, thank you so so SO much to everyone who donated and help build the Museum's collection. I'd also like to take this opportunity to thank the Museum's dedicated volunteers, as well as others who consistently engage with the Museum. Time and expertise is every bit as valuable as artifacts, and I'm so grateful for those who support the Museum via social media comments, email, etc. As you know, things have not been easy the past few years - unfortunately there are many nasty people who want nothing else than to see the Museum fail - but I feel very heartened by the few who are there for me. You know who you are. :) Oh, and if you have any old makeup you think you would be a good fit for the Museum, check out how to donate it by visiting the Support page.

Thoughts? And what's the best gift you received in 2021?