I was skimming through vintage copies of Ebony magazine at archive.org, hoping to find some interesting and not widely known-about Black beauty pioneers.  I struck paydirt with the February 1949 issue, which profiled a TV makeup artist named Blanche Hunter. 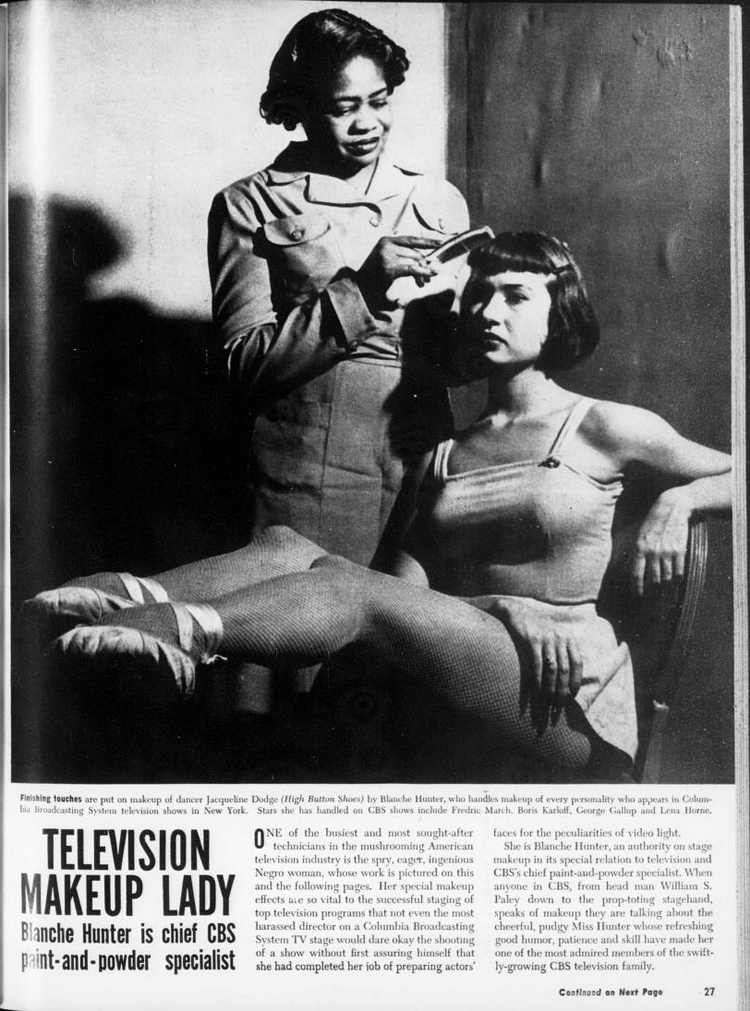 Hunter worked at a library in Harlem before starting her role at CBS as "wardrobe mistress" in 1943. After a year she became the head makeup artist. While the Ebony article and one in the Baltimore Sun from the same year detail Hunter's exceptional skills, there was almost no biographical information.  So off I went in search of her personal background and to hopefully find out what she did after her time at CBS. According to this book she worked there for 11 years, but her career after CBS is unclear.  I also wanted to know if she was the first Black head makeup artist at a national TV network. What follows now is a summary of the research by me and another lovely Museum volunteer, Professor Melissa! Melissa is a bona fide professor and reference librarian in New York, and she did much of the legwork contacting various archives. 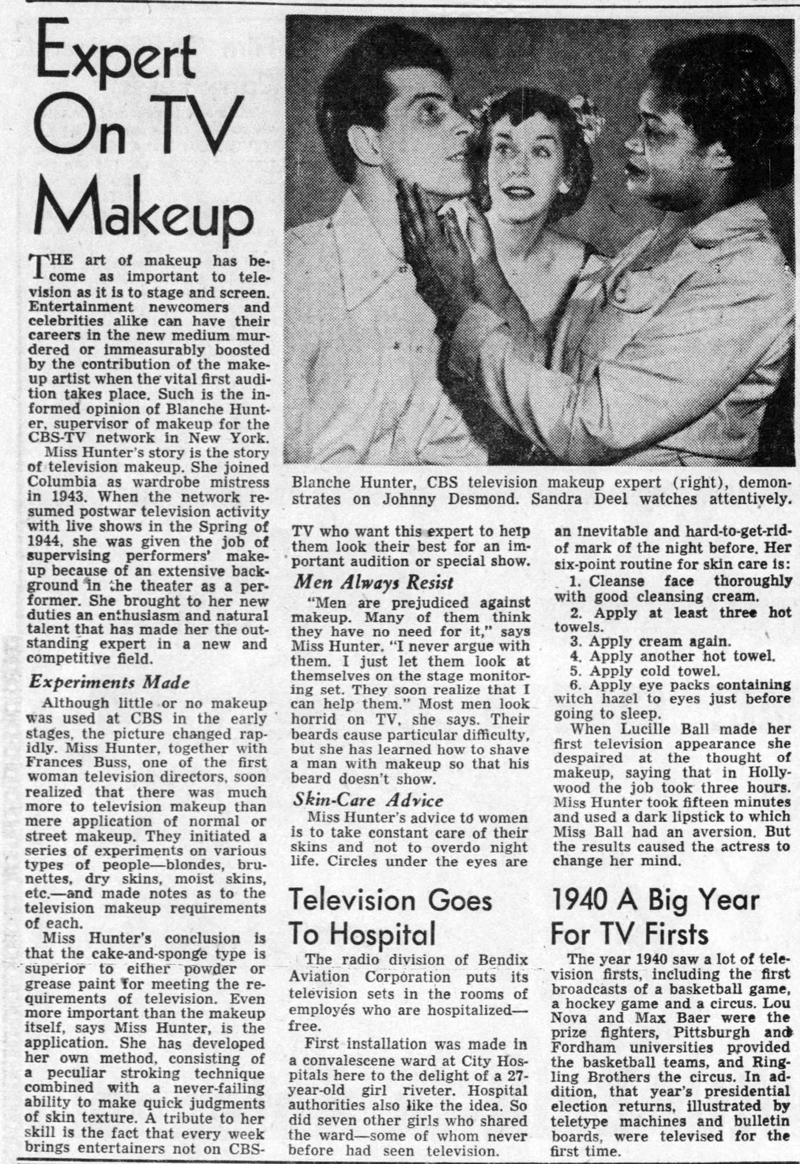 Hunter was always referred to as "Miss" in the articles but in this image she appears to be wearing a band on her left ring finger, so Hunter may possibly be her married name. The round flat containers could be Max Factor. Given the packaging, the articles' mention of Hunter's fondness for pancake makeup, and the fact that she came from a theatrical background so would be quite familiar with Max Factor, it's as good a guess as any. 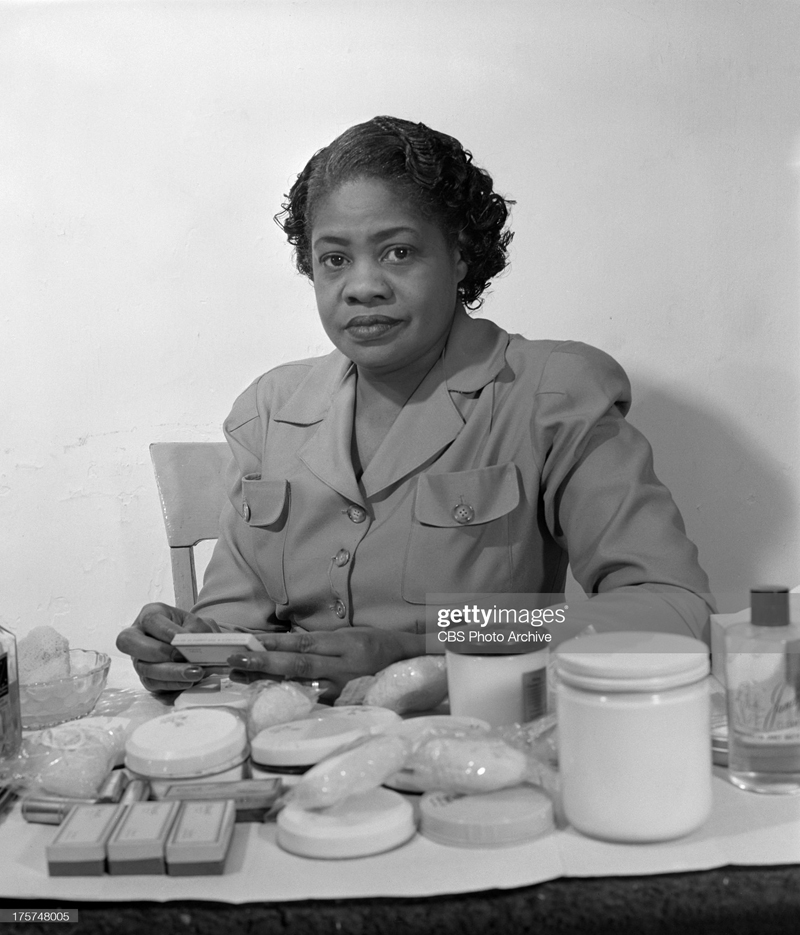 It's impossible to tell how old she is in the Getty/CBS archive photos, but I'm guessing Hunter was born about 1905-1910. My assumption was that she was born and raised in New York City so looking at city-based databases and archives made the most sense. I started with the NY Genealogical Society. The research consultant there couldn't tell me much unless I could pay an unaffordable fee to an actual genealogist, but she did suggest some leads.
1.  The Schomburg Center at the NYPL; check out the city directories they have.
2. Check both the NY state and federal census from about 1905 through 1940. (I did see an entry for a Blanch May Hunter born in 1903 in one of those ancestry sites, but there was an E missing from her first name and again, it's not certain whether Hunter is her married name. I don't think any marriage records or obituaries showed up. I also found a mention and photo of a Blanche Hunter in the Baltimore Afro-American from February 1950 attending the funeral of her brother, but the picture is far too blurry to see if it's the same Blanche Hunter.)
3. CBS archives: I looked at their online archives and in addition to the photos there were 1 or 2 mentions of Hunter, but it just indicated the shows she worked on...not much info.
4. The last few places the consultant recommended: the NY state municipal archives, NY Times obituary project, and any New York land records. 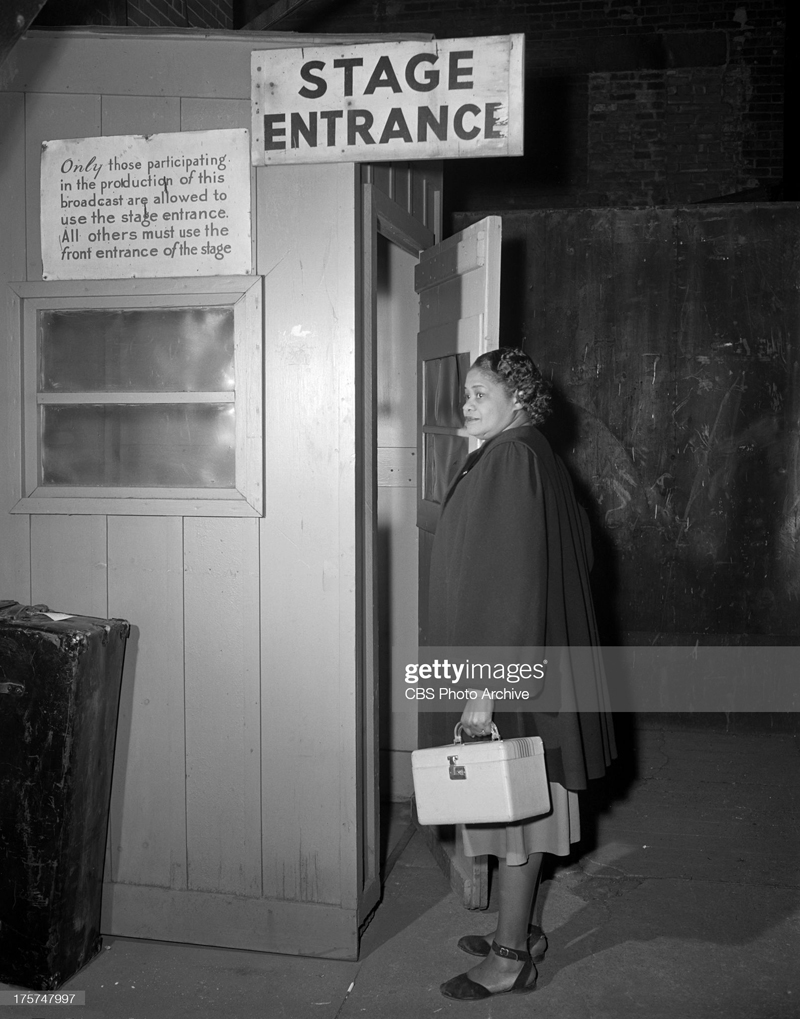 I was completely overwhelmed, but fortunately Melissa enthusiastically stepped in to follow up on these suggestions. She reached out to no fewer than 6 archives and organizations. Here are the results.
1. Museum of the Moving Image - no mention of Blanche Hunter in the archives
2. NYPL Schomberg Center - had some CBS clips, including the Bob Howard Show, but there were too many clips and would require paying their research fee. While it would have been interesting to see the clips, they didn't primarily focus on Hunter; we were looking more for interviews with her rather than clips of the TV shows she worked on.
3. Library of Congress - recommended contacting the Paley Center
4. Paley Center - no information
5. NY Historical Society and WBSS Media - no response
The only other mentions we could find online were either irrelevant (such as a 1946 issue of Billboard magazine and the 1947 issue of a publication called the Decisions and Orders of the National Labor Relations Board), provided no additional or visible information, or were located in books that were impossible to get a copy of, such as this one - Melissa could only find a single copy, which currently has a price of $283 on Amazon. There may be some copies in university libraries near Museum headquarters, but without library privileges I can't get my hands on it. Another book, Radio Live! Television Live! contains a brief anecdote regarding Hunter's work on The Garry Moore Show. Prior to a special taping in Florida, Moore tried to ensure the two Black employees working on the show would be treated the same as the white ones. While Hunter and the other Black employee, production assistant Alfreda Diggs, were not harmed, they recalled being "fearful" of leaving the hotel they were staying at. It also seems like they were forced to eat separately from their white colleagues. (I think the author might be greatly underestimating the level of racism in 1957 New York. It may not have been as egregious as the South, but the statement that "color wasn't a problem" in NYC rings very false to me.) 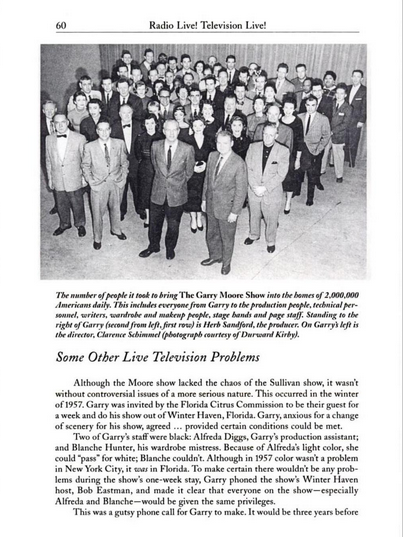 Also, the date of this story conflicts with the earlier timeline of Hunter's tenure with CBS. If she had started in 1943 and stayed 11 years, it would mean that she stayed with the network until 1954. The above anecdote is allegedly from 1957, so how long was Hunter actually working for CBS? This is further confused by a mention in this book published in 1957 which states that Hunter had been with CBS for 13 years. 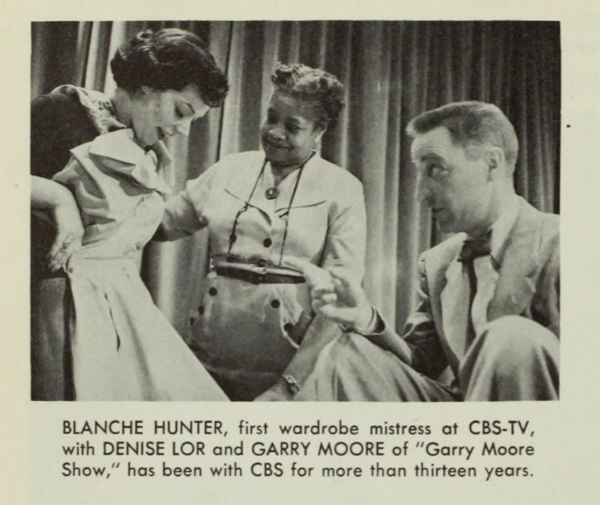 My only parting thought on Blanche Hunter is that she was amazingly talented. A Black woman working as the head makeup artist on a national TV network and garnering press in the late 1940s must have been highly unusual. As we know, Black women have to work twice as hard to get half as much, so for Hunter to succeed at such a high level during that era demonstrates truly outstanding ability. Unfortunately, like so many other Black luminaries, her story is not complete.

I'd like to give a big HUGE thanks to Professor Melissa for her excellent work on this. Given her research prowess, I'd be shocked if anyone else is able to obtain additional information for Ms. Hunter, but if you do, please send it my way!