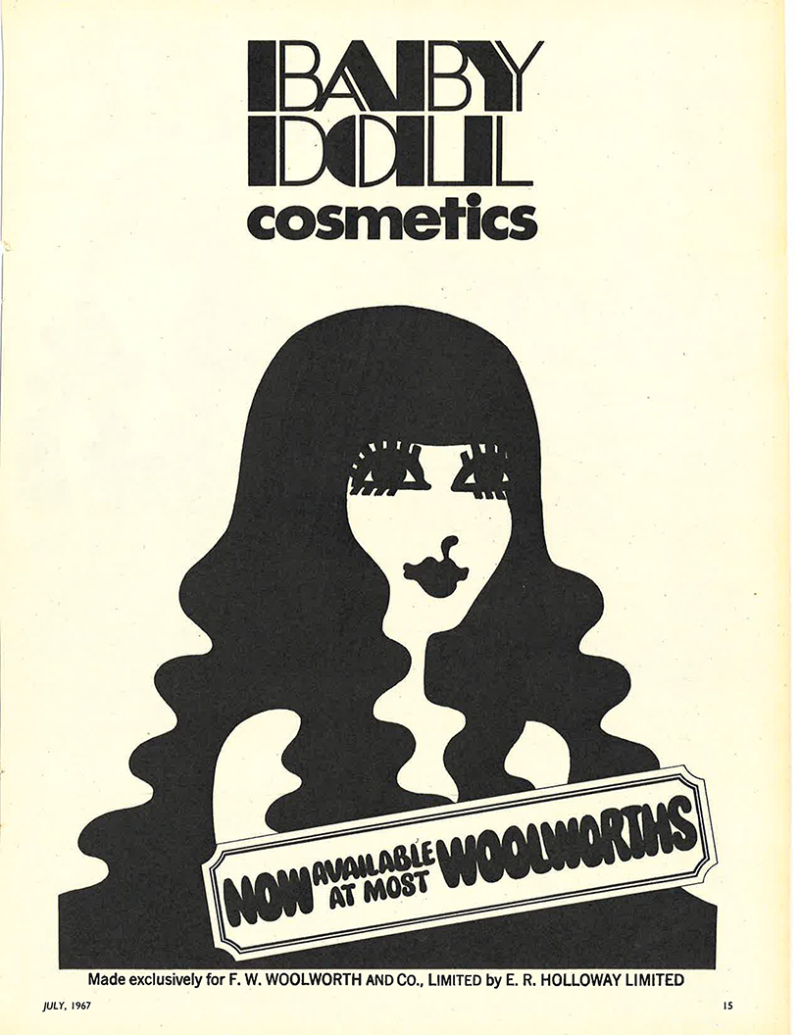 You might remember I became obsessed with finding information on the Baby Doll makeup range back in the spring of 2017, when I came across their fabulously psychedelic and colorful ads from the late '60s. While I managed to acquire several of the original ads, I still couldn't find much on brand itself, other than it was exclusive to Woolworth's in the UK and obviously geared towards younger women/teenagers. Fortunately, UK-based Makeup Museum volunteer Emma Berger stepped in to do some research! In addition to what she uncovered on her own, she also had the brilliant idea to email the curator of the Woolworth's Museum, Paul Seaton, who provided additional information. Here's what Emma and Paul had to say about the brand. (Images in this post are the Museum's unless otherwise noted.)

Baby Doll was launched in May of 1967 at all 1,100 Woolworth's locations in the UK. The supplier of the line was a company named E.R. Holloway, a family-owned business. Based in Lavenham, Suffolk, Holloway was a principle supplier of affordable cosmetics following WWII. The ‘Evette’ brand was one of the market leaders in the 1950s, coinciding with shoppers having more spending money and cosmetics becoming more socially acceptable. Later, the company realized there was a vast, largely untapped teenage market that wanted to emulate actresses and models like Twiggy. Holloway conducted some market research by assembling a panel of teenage girls, who indicated that they would like inexpensive, fun makeup with bright colors, especially for nail polish and lip gloss. They found the Woolworth's current makeup offerings to be boring and old-fashioned, and they also didn't want to be "stuck waiting behind older ladies" so they also wanted their own counters. 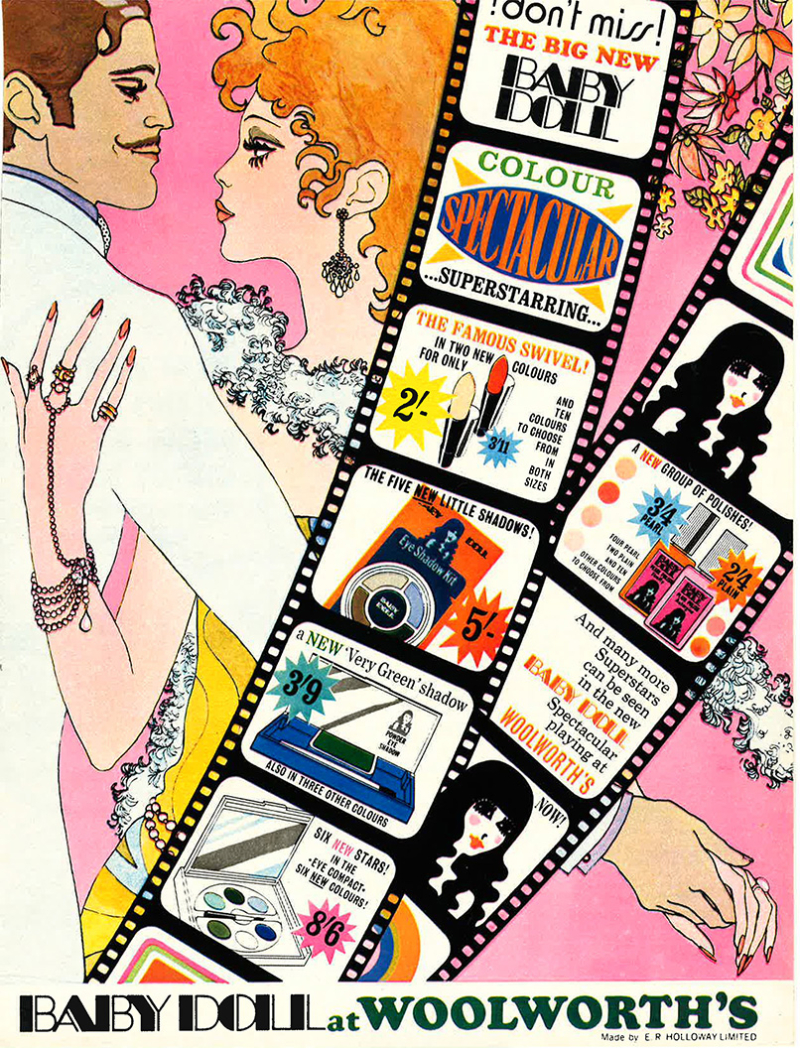 Judging by the ads, E.R. Holloway delivered. I don't know about the quality of the makeup, but the prices appeared to be a pittance for the incredibly colorful and fun product line. According to the Sharon Kane, author of the Sweet Jane blog, the eye-catching ads appeared in UK magazines like Jackie, RAVE and Photoplay magazines. It's unclear as to what prompted the choice to use illustrated girls vs. photographs of models, but I think the decision was appropriate, as it aligned with the Baby Doll brand vision - supplying plenty of colors to choose from and encouraging "playtime" with makeup - and also helped them stand out from their competitors. 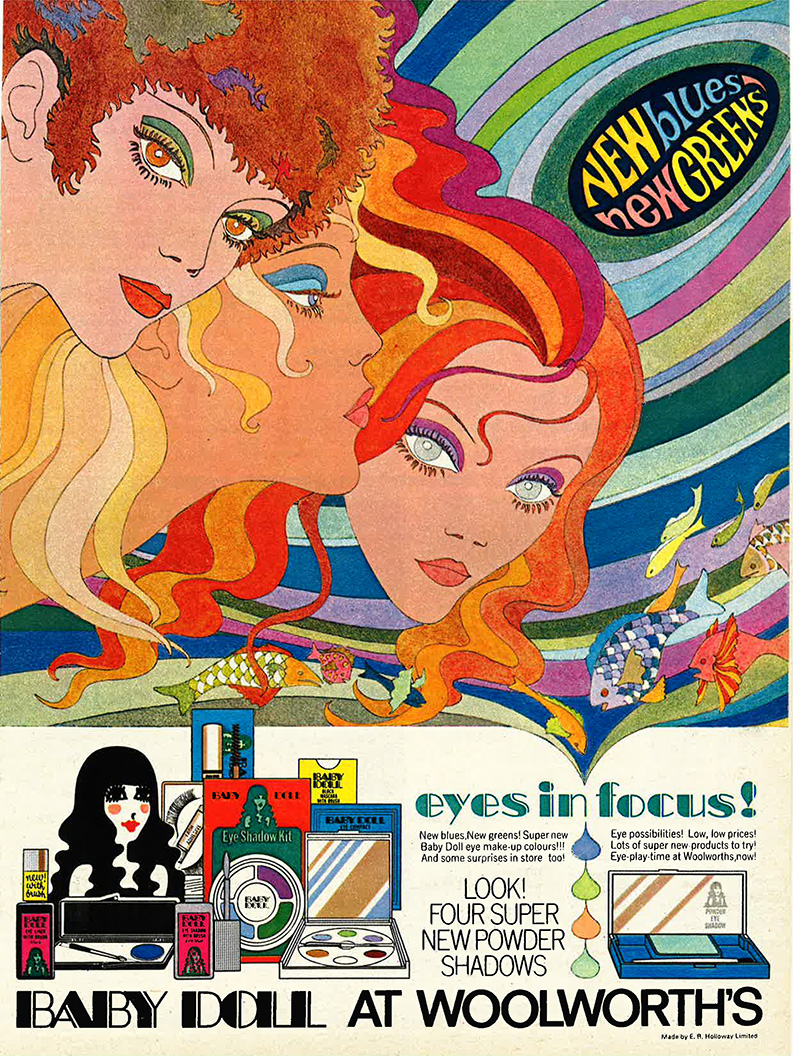 The use of illustration was fairly unique for the time as by the late 1960s illustrations had become scarce in cosmetic ads. By that point, most companies had shifted towards using photos for the bulk of their marketing - gone were the days of hiring artists and fashion illustrators who ruled advertising from the 1920s through the '40s. The ads can also be considered a precursor of sorts to the Stila girl illustrations some 30 years later. 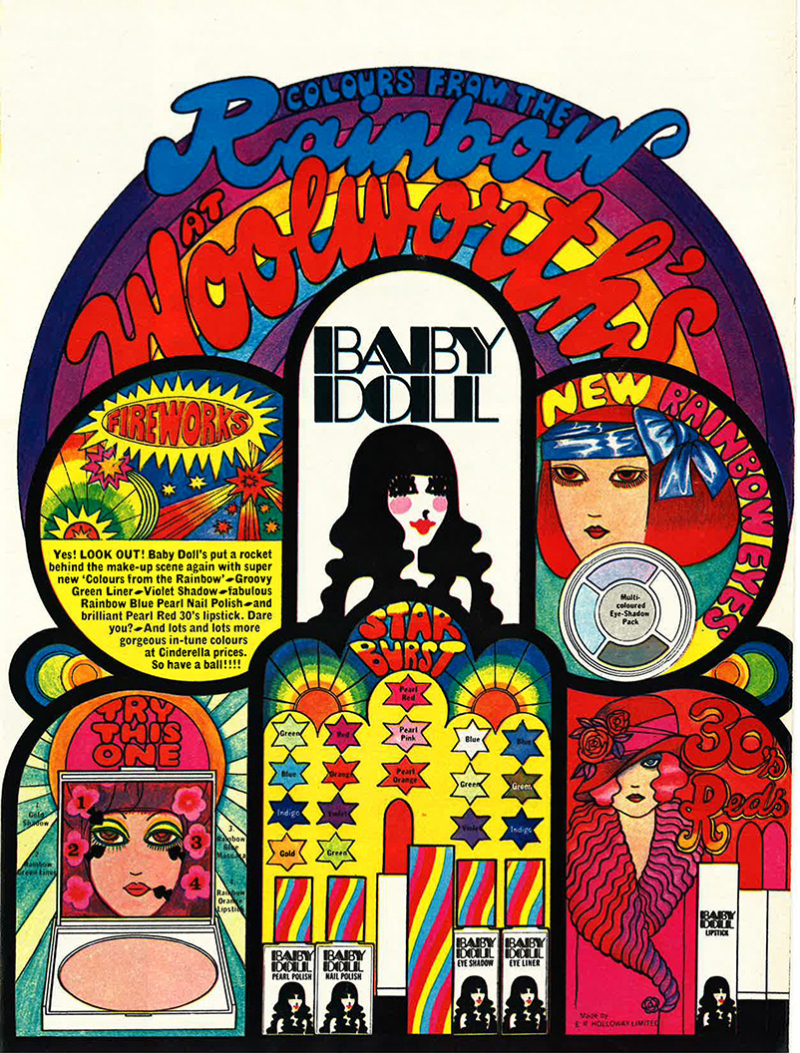 The ads are also representative of their time in their mentions of sun, moon and stars as in the ad below, or numerology as in their Lucky Numbers ad. Remember that flower children were pretty fascinated with astrology and other pseudo-science, so it makes sense to incorporate these aspects as they appealed to the hippie demographic. 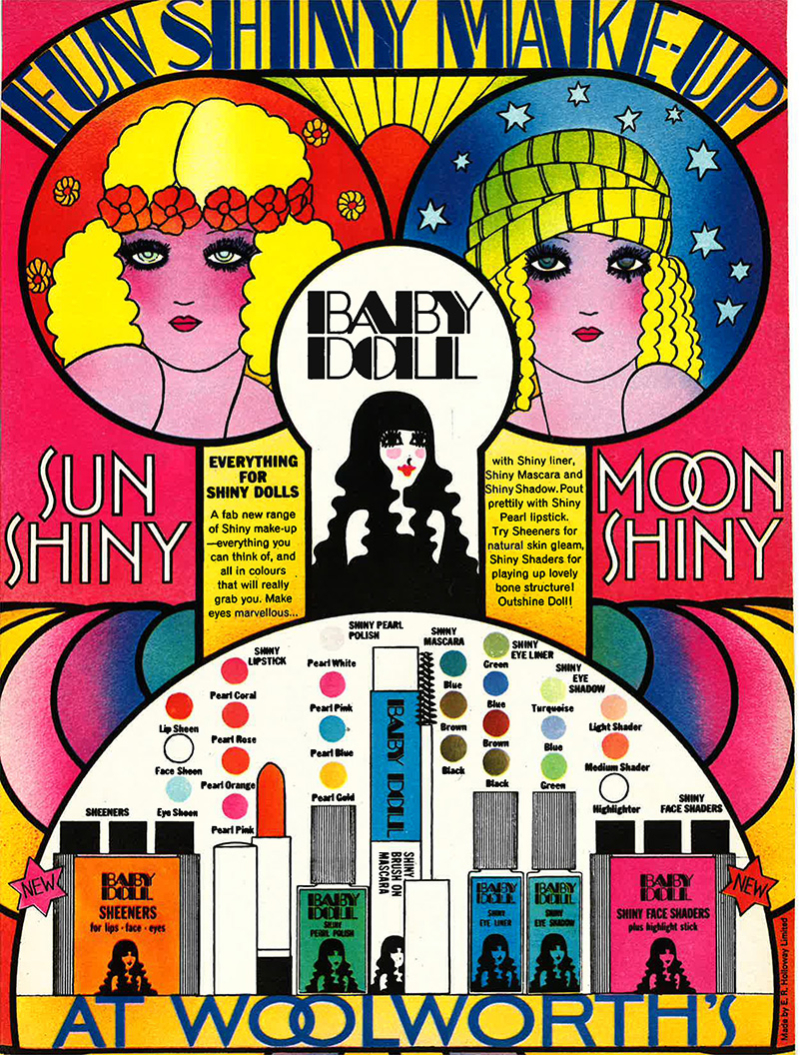 Obviously I'm smitten with the print ads, but the radio commercials were a hoot.  The spots aired on Radio Luxenbourg and used Woolworth's Embassy Records commercials as a template, given their success with a younger crowd. I tried to put together a little video using the clip that Paul so kindly shared. I couldn't get Typepad to upload it so I had to (shudder) put it on YouTube and link to it. Ugh.

Paul mentioned that Holloway took a "shared risk" approach with Baby Doll by financing the counters and product development in exchange for Woolworth selling the products in all their stores for at least two years and for continuing to carry the Evette line. Consumers were pleased with Baby Doll, at least according to one anecdote shared by Brenda Hendley for Yours magazine. “When working as a Saturday Girl in Woolworths in the late 1960s I was lucky enough to be on the make-up counter when they launched Baby Doll Cosmetics. As a 15-year-old girl, this range was so exciting. It had lilac, green and blue nail varnish, brown eyeshadow and pale pink, lilac and peach lipsticks, instead of the usual red and orange nail colours worn by our mothers. Even the posters were exciting with illustrated dolly girls in the arms of handsome men. To my mother’s horror, I went out that weekend sporting lilac nail polish and lilac lipstick to match my lilac mini dress. I can still remember how excited and glamorous I felt.” 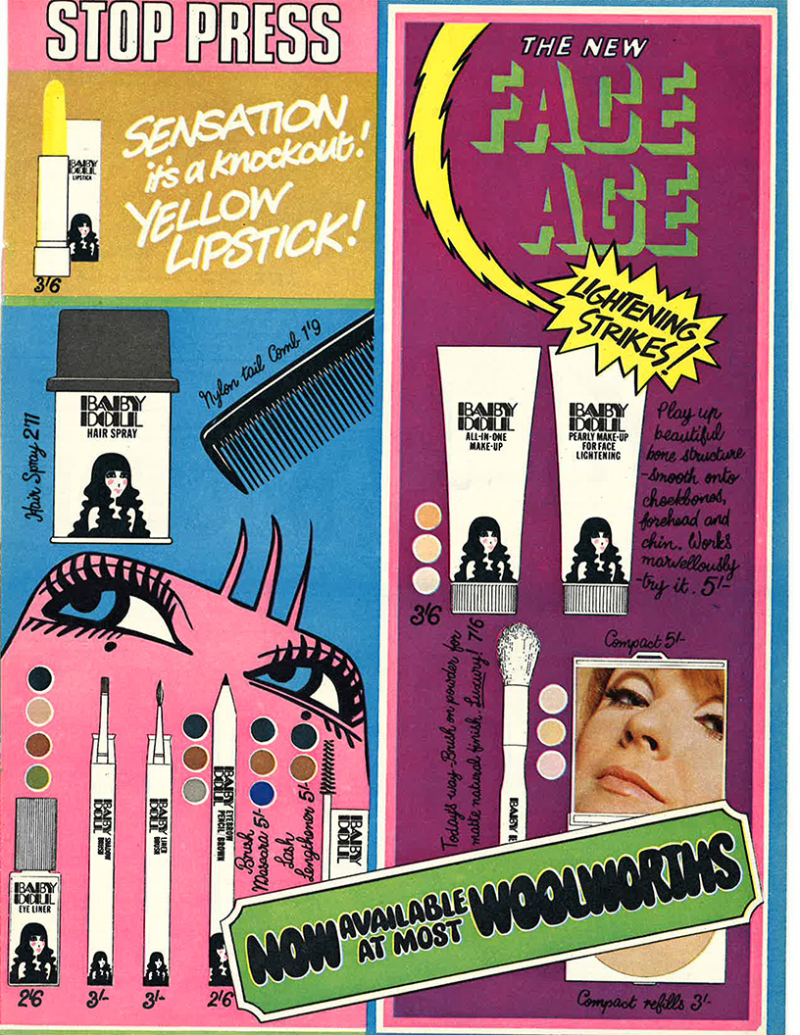 Paul confirmed Baby Doll was a successful line, but Holloway may have ended up competing against it by launching Tu, another youth-oriented range, in the 1970s. Tu was popular in both the UK and Canada and was "less fashionable" meaning that perhaps Baby Doll's only flaw was that it was too niche. Rainbow colors are great but if that's all a makeup line offers, only a certain demographic - mostly teenagers, and adventurous ones at that - would have purchased it back then. From the look and sound of it, Tu was an affordable line for younger clientele, but sold more versatile (read: safe) color and products that would be suitable for daily use. Baby Doll, by contrast, had very few neutral shades and textures; unfortunately I don't think yellow lipstick and pink mascara would be considered everyday wear even among younger women. In any case, you can see displays from both the Tu and Evette lines over at Karen Waddy's blog, Made in Lavenham. 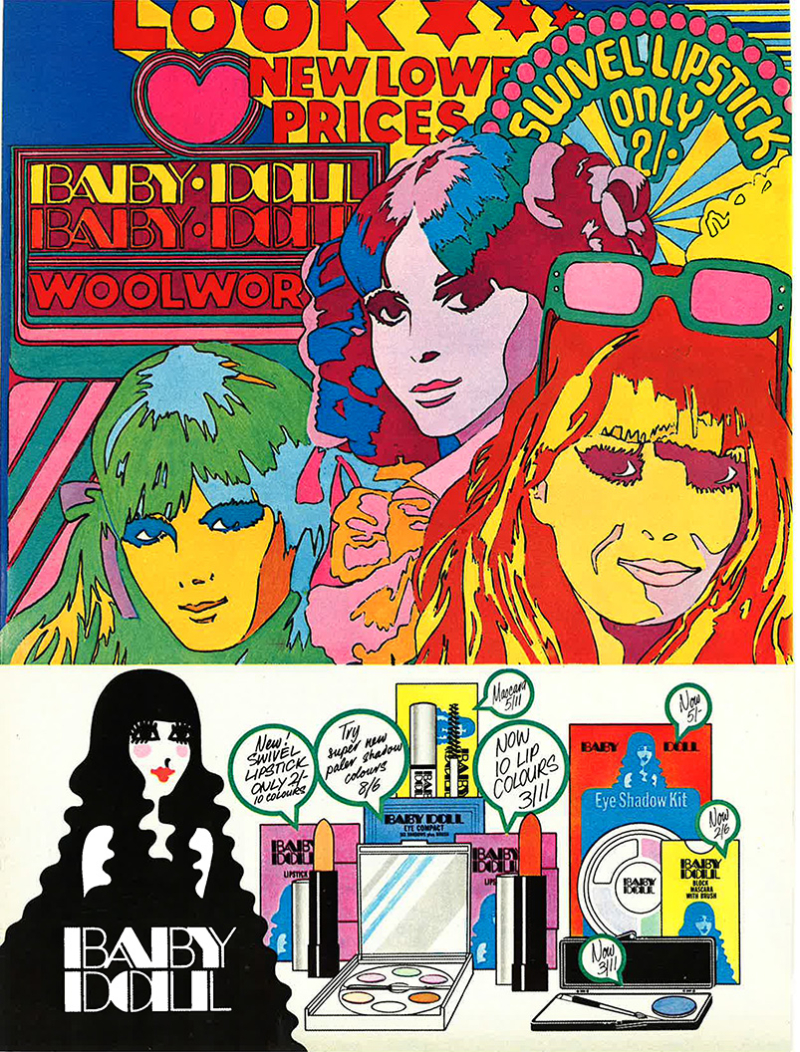 Some brief additional thoughts: first, I would give my eye teeth to know who illustrated these ads! I've pored over the ads to see if there was any artist signatures but no luck. Sharon Kane suggested that Caroline Smith may have been responsible for at least some of the ads and I think that's as a good a guess as any. I actually contacted Smith through her website and am hoping for a reply. Update: I heard back from the artist and she confirmed the Baby Doll ads are her work! How very exciting to finally have this makeup mystery solved! 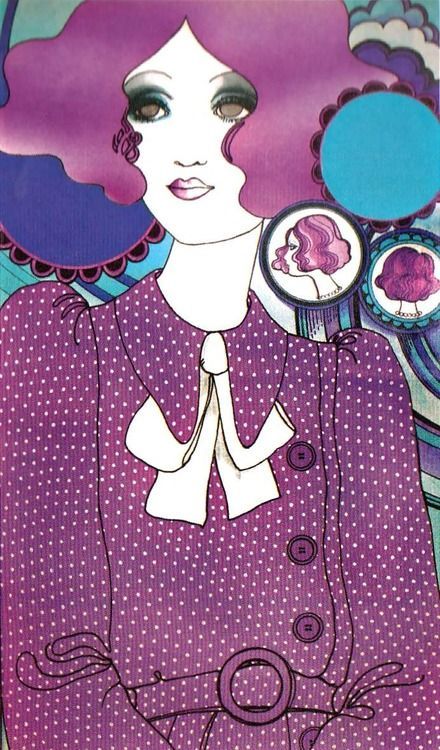 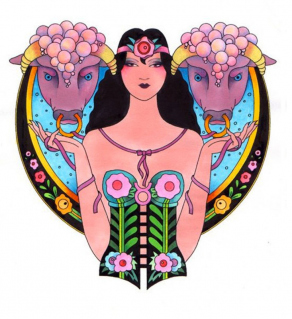 I also wish I could locate some of the makeup itself, but I've literally never seen any actual photos of it except for this one. 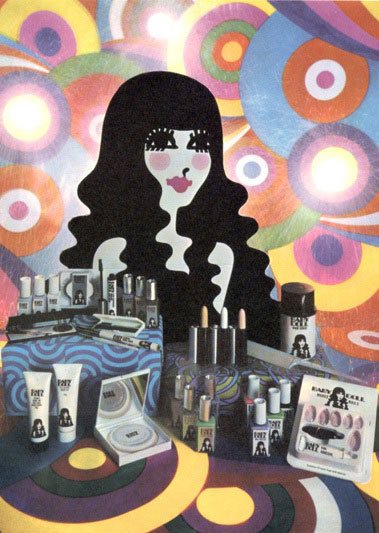 You can sort of see them in this ad which dates to 1969 and does not use the amazing illustrations, instead opting for the typical close-up photo. I think the line definitely loses a bit of its appeal. As noted earlier, without the unique ads, Baby Doll resembles a pretty run-of-the-mill makeup line that doesn't really stand out from other youth-oriented UK brands (although "she didn't tell her ugly sisters either" cracks me up.) 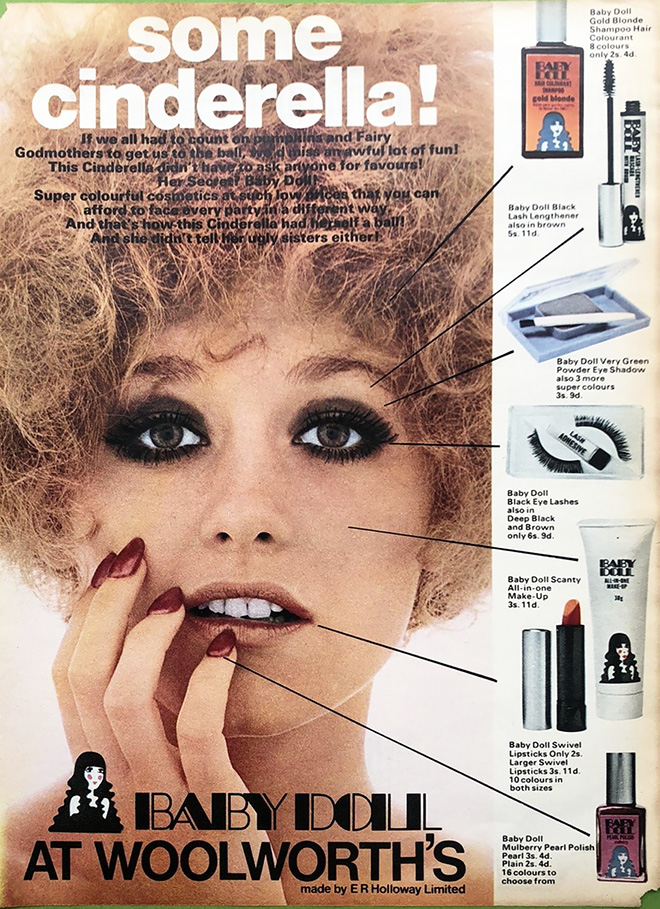 This brings me to my last point: it's strange that you can still buy objects from what I believe were Baby Doll's UK-based competitors at the time, Yardley, Mary Quant, Boots 17, Miner's and Rimmel, but not a single relic from Baby Doll besides the ads still exists that I've seen. I'm very curious about Baby Doll's sales compared to other brands, as they had a very similar outlook in terms of a more playful approach to makeup and were primarily intended for the youth market. Why these brands had longevity while Baby Doll, despite its distinctive ads, did not is interesting. Perhaps the facts that Mary Quant already had significant name recognition as a modern fashion brand and that Yardley hired some of the biggest models of the time for their makeup campaigns had something to do with it. Additionally, while Holloway was an established company, it didn't have quite the pedigree of Rimmel (established in 1834) or the reach of Miner's and Boots 17.  It's a shame, honestly, as I believe Baby Doll was the most creative and fun line out of all of these. Okay, I have a weakness for Quant's crayons and basically all of Yardley's packaging (especially their paint boxes and novelty items), but I think Baby Doll is my favorite for the ads, colors and overall vibe. If I had been around back then I would have bought the whole line.

HUGE thanks to Emma and Paul for researching and gathering this history and permitting me to post it here! And if anyone has additional information or memories they'd like to share about Baby Doll I'm all ears.