As they do each holiday season, Sulwhasoo released a beautiful compact featuring traditional Korean craftsmanship back in 2019. Why I'm just getting to it now is beyond me, but I did think the design was appropriate for spring so here it is.  The 2019 compact celebrates a technique known as chilbo (not to be confused with the mountain of the same name in North Korea.) Although I couldn't find nearly as much information online about chilbo as I could for their previous ipsa compacts, I thought it was still worth a brief post - sharing cultures from across the globe is one of the main reasons I established the Museum.

Sulwhasoo collaborated with master artisan Noh Yong-Sook, the only chilbo specialist to be officially recognized by the Korean government, to produce the compact.  (Yong-Sook actually wrote an entire book on chilbo, which I was unable to locate...plus it probably would have been in Korean anyway.) Chilbo is a Korean enamel technique similar to cloisonné and dates to the 18th century.  It involves applying a finely crushed (powdered) glass, either wet or dry, to a metal surface and then baking in a kiln to create a glossy and vibrantly colored finish. 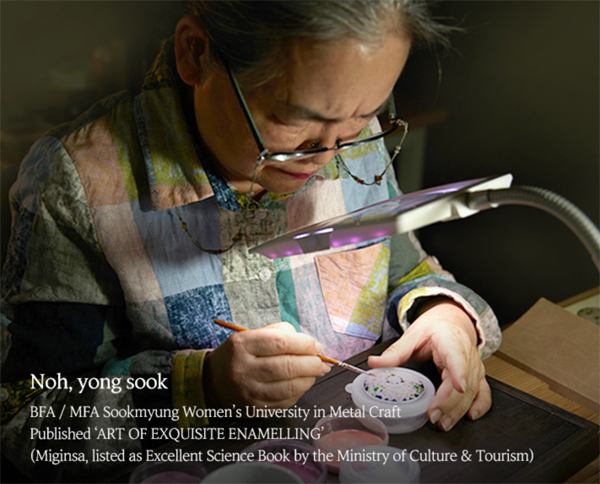 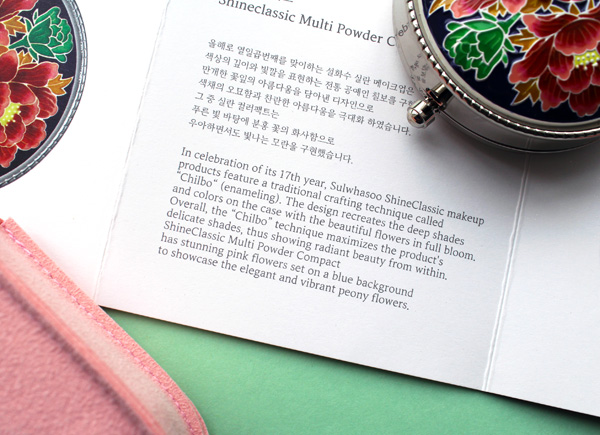 Chilbo means "seven gemstones" or "seven treasures," referring to gold, silver, lapis lazuli, crystal, coral, agate and pearl. The term actually has Chinese roots: gold, silver, etc. were the seven precious gems used to adorn Buddhist altars, as mentioned in traditional Buddhist scriptures.  Sulwhasoo explains that one gemstone or metal only has one color, so a name referring to multiple hues is appropriate given that chilbo produces a variety of unique colors that cannot be created with other techniques. 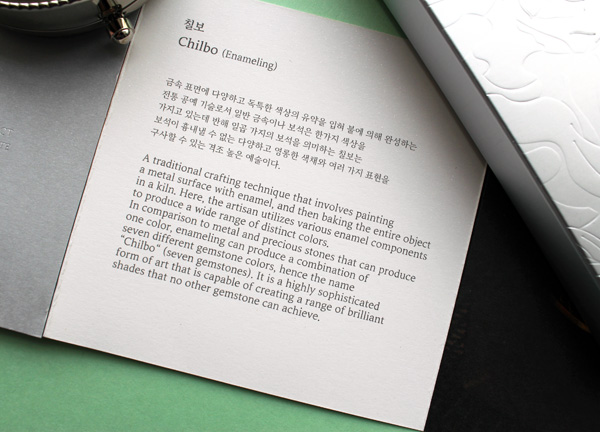 The end result is stunning.  A peony motif was selected for the compact's design, as peonies traditionally represent wealth in Korean culture.  Now that I think about it, the peony is also the reason I held off on posting about the compact until now, as last spring I had planned on featuring it since peonies are a spring flower but ended up writing about Sulwhasoo's Antoinette Poisson collab instead.  In any case, the color scheme is exquisite as is the embossed peony on the blush. 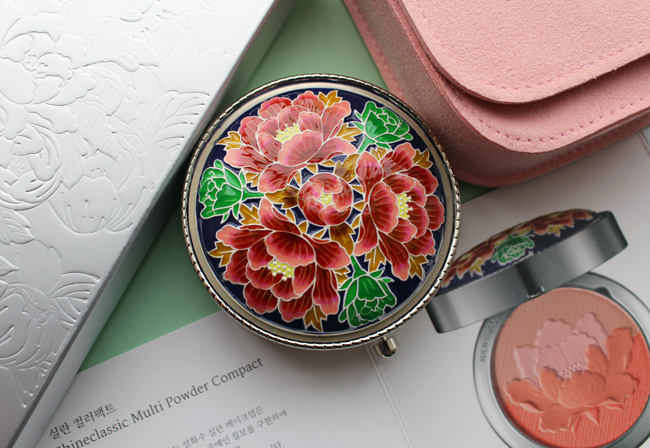 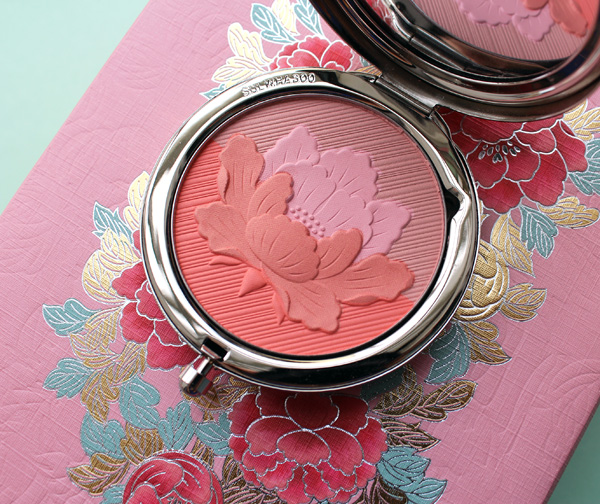 But peonies aren't the only traditional motif featured.  The company explains that the depiction of oddly shaped rocks alongside peonies signify longevity. 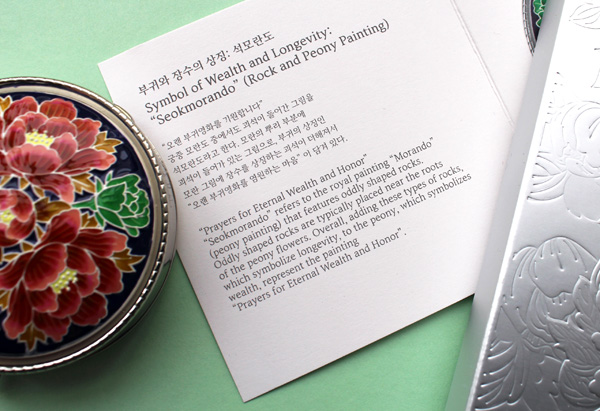 While the design on the compact itself doesn't incorporate the rocks, they are noticeably visible on the outer box and inside sleeve. (Plus I wanted an excuse to show photos of the box, which is a work of art in and of itself.) 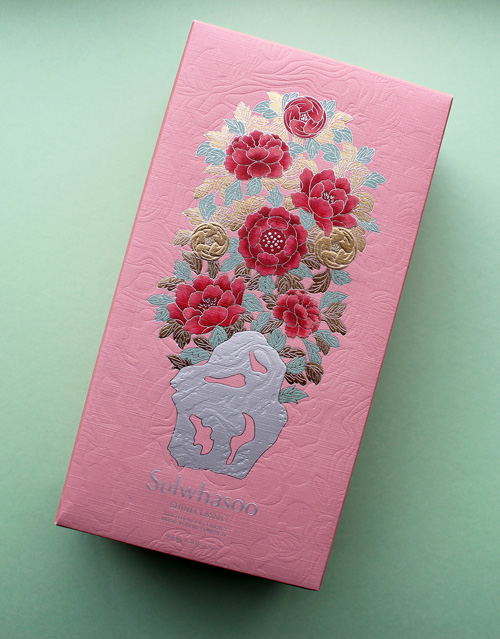 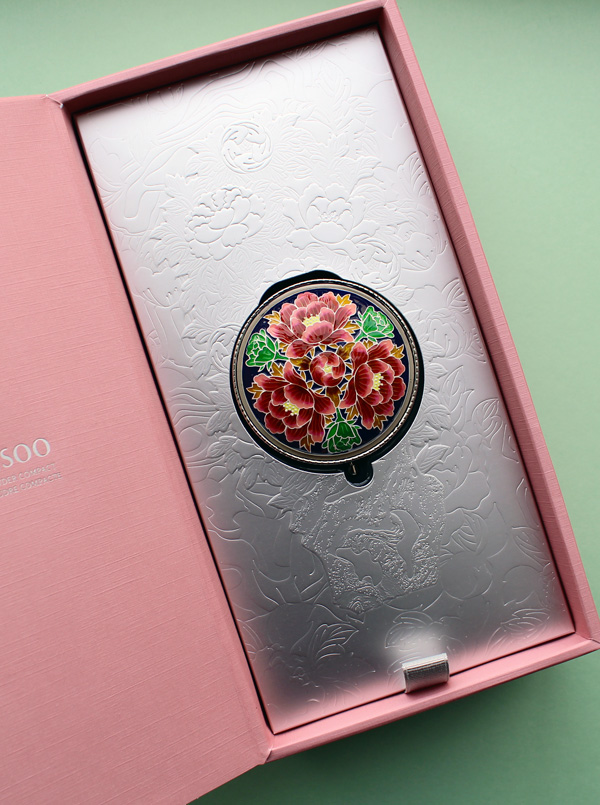 I could be wrong, but the company may have been referencing the rock and peony design on this 10-panel screen, as they look quite similar. The screen was produced during the Joseon dynasty. The National Museum of Korea explains that in addition to wealth, peonies also signified royalty as they were the "king" of flowers. The Joseon royal court used peony-themed screens during important events such as royal weddings and ancestral rituals.

The holiday 2019 collection included another ShineClassic compact with the same peony design against pale golden-beige background and a cushion case. But the most special (and unaffordable) item was a real chilbo silver powder bowl. Only three were made! 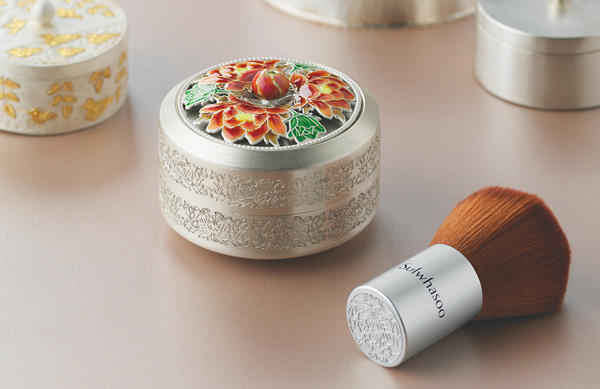 Here's a short video so you can get a glimpse of the chilbo process. The layering of the colors and the high-gloss finish give the design a multidimensional, almost iridescent effect. The regular ShineClassic compact is beautiful, but in looking at this video you can tell it wasn't painted by hand.

In addition to the compacts, Sulwhasoo organized a special exhibition called the Sulwha Cultural Exhibition. Apparently they've been having these exhibitions for a few years now (how did I not know this?!) and they're intended to highlight aspects of traditional Korean culture and art with a modern twist by commissioning contemporary artists to share their take on crafts, folk tales and other Korean heritage. This year's exhibition centered on prints and patterns that could be used in one's home, entitled "Micro-Sense: House of Pattern".  A "house" of sorts was constructed by eight artists in the atrium at the headquarters of Amorepacific, Sulwhasoo's parent company. 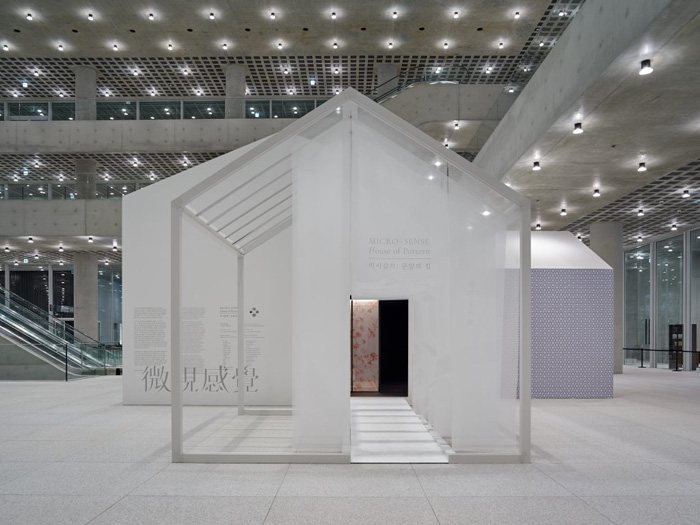 As Kim Mina, senior VP of Sulwhasoo explained, the company sees itself as a sort of cultural conservator, spreading awareness about traditional Korean art and culture while making it palatable to younger generations. "Culture is like the air that we breathe. We wanted to identify elements of traditional culture and share it with everyone before it disappears. These traditional patterns are beautiful, but not well-appreciated. We wanted to show people that they don’t just exist in your grandparents' homes, or in a museum. These patterns can still live in a contemporary setting like your home." 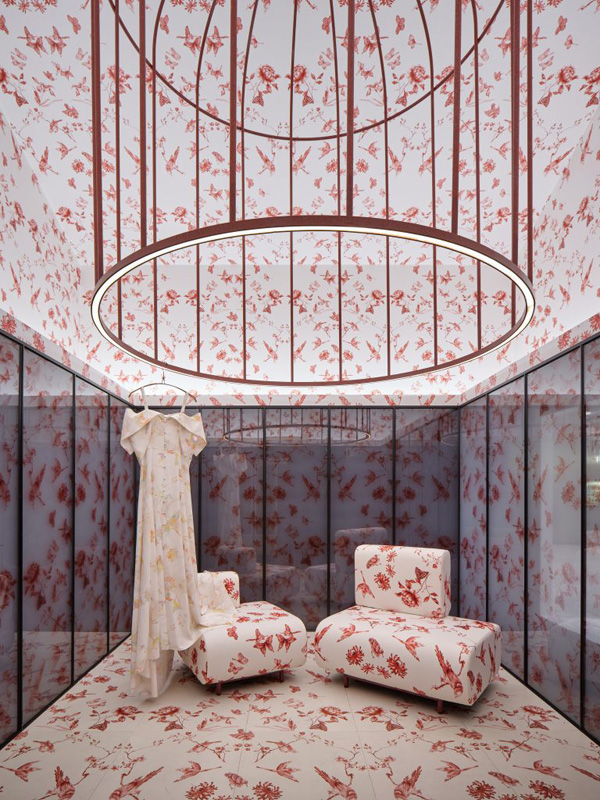 Sulwhasoo incorporated their holiday 2019 collection in the "powder room" at the exhibition, as the peony motif tied into many of the patterns displayed. 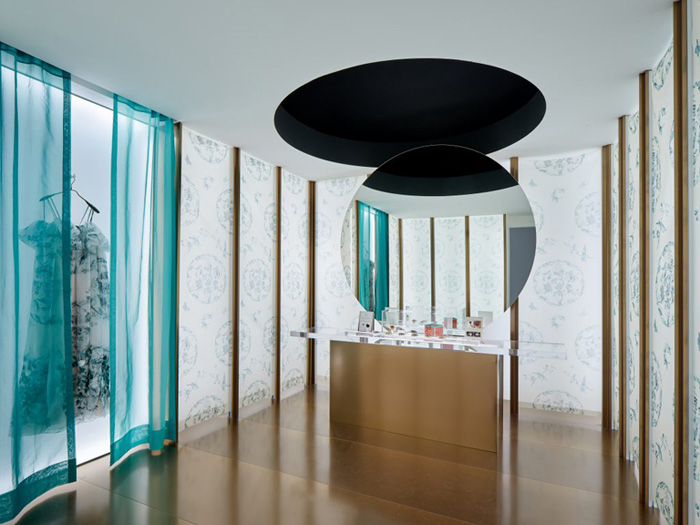 Sulwhasoo also used a portion of the proceeds from the collection towards their Beauty From Your Culture campaign, which works to raise money for various historical or cultural sites. In Singapore, for example, S$20 for each purchase of a ShineClassic compact was donated towards the Asian Civilizations Museum.

I was going to wrap things up by citing other examples traditional chilbo, but in poking around online for this post I found the work of an artist who is helping to preserve the craft in a more modern way so I wanted to feature that instead.  Kwangho Lee, a graduate of Hongik University in Seoul, creates furniture and other large home decor pieces out of chilbo.  Chilbo usually adorned small decorative objects such as women's jewelry, trinket boxes, hair ornaments, etc., and was limited to those who could afford it. Lee sought to both modernize and democratize chilbo. "Enameled things were not common purchases among the population. Barely was it used in interiors...the main idea of my works was to give new meaning and function to the most ordinary things, like wired lights and furniture," Lee explains. 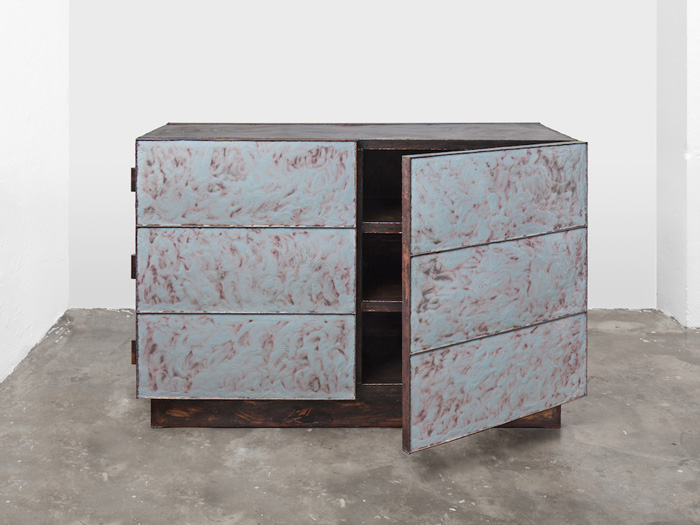 While he uses the usual technique of application - painting crushed precious materials onto copper or other metals - the firing process is different and leads to unexpected results. Chilbo kilns are small because the objects it decorates are small as well, and the door can be opened to check the color during the baking process. But to accommodate the larger-scale furniture and other pieces he creates, Lee has to employ a bigger kiln used for ceramic pieces that cannot be opened during baking.  "It’s not an easy task for designers of my age and generation to practise further and beyond the original range of techniques that are considered 'traditional'. So I approached it by eliminating the traditional part, and focused only on the technique itself...the [kiln] door must be shut tightly the whole time. Therefore I can only imagine and predict the final colour of the enamel and the copper’s reaction to heat."  A close-up of this cabinet shows the variety of colors as well as the raw edges - Lee opted not to sand down the welding to create a smooth surface, preferring a rough, unfinished look for a more industrial feel. 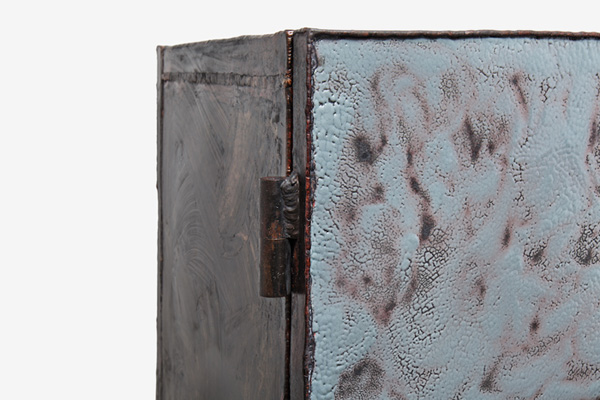 More recently Lee has experimented with placing chilbo panels into a cherry wood frame to create a modern-looking grid pattern. 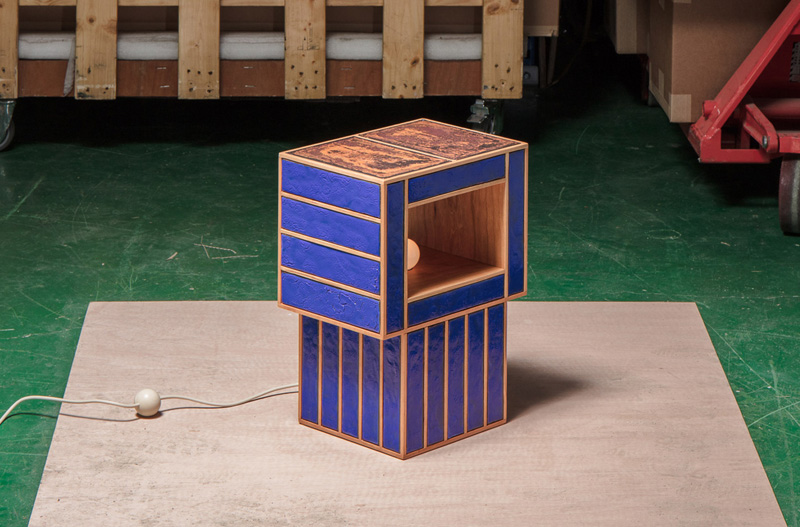 I thought this was a really interesting way of combining a technique that goes back hundreds of years with a 21st century eye for design. And it's fascinating to see the contrast between Lee's and Sulwhasoo's approaches to preserving an age-old artistic medium; both have the same goal, but are working towards it in totally different ways.

What do you think of the chilbo compact? And which do you prefer, chilbo or ipsa? I love the vibrant colors chilbo creates, but I'm partial to the intricacy of ipsa.  Yet it may be usurped by Sulwhasoo's 2020 bejeweled holiday ShineClassic, which I still need to procure...stay tuned!