A not so magical holiday with Holiday Magic Cosmetics

While hunting for vintage Christmas makeup a few months ago I stumbled across a brand from the 1960s called Holiday Magic. This won't be a complete history either of the brand or the man who founded it, but it's one of the most compelling (for all the wrong reasons).  Buckle up because you're in for a truly wild ride!

In 1964, a California salesman by the name of William Penn Patrick (b. March 31, 1930; d. June 9, 1973) noticed a neighbor having a garage sale of organic fruit-based cosmetics called Zolene.  Sensing a new business opportunity, Patrick bought the entire stock for $16,250 (or about $137,000 today).  Re-branded as Holiday Magic, Patrick proceeded to start selling them as a multi-level marketing business (MLM).  Now, MLMs for cosmetics and other goods had been around for many years prior to Holiday Magic, such as Avon, Mary Kay, Watkins, Fuller Brush, etc. While their ethics are murky - on the one hand it gave people jobs and products that they otherwise wouldn't have access to, on the other they require fairly unsavory tactics - they are not technically against the law.  But Holiday Magic wasn't just your average MLM:  it was possibly the biggest pyramid scheme prior to Bernie Madoff. 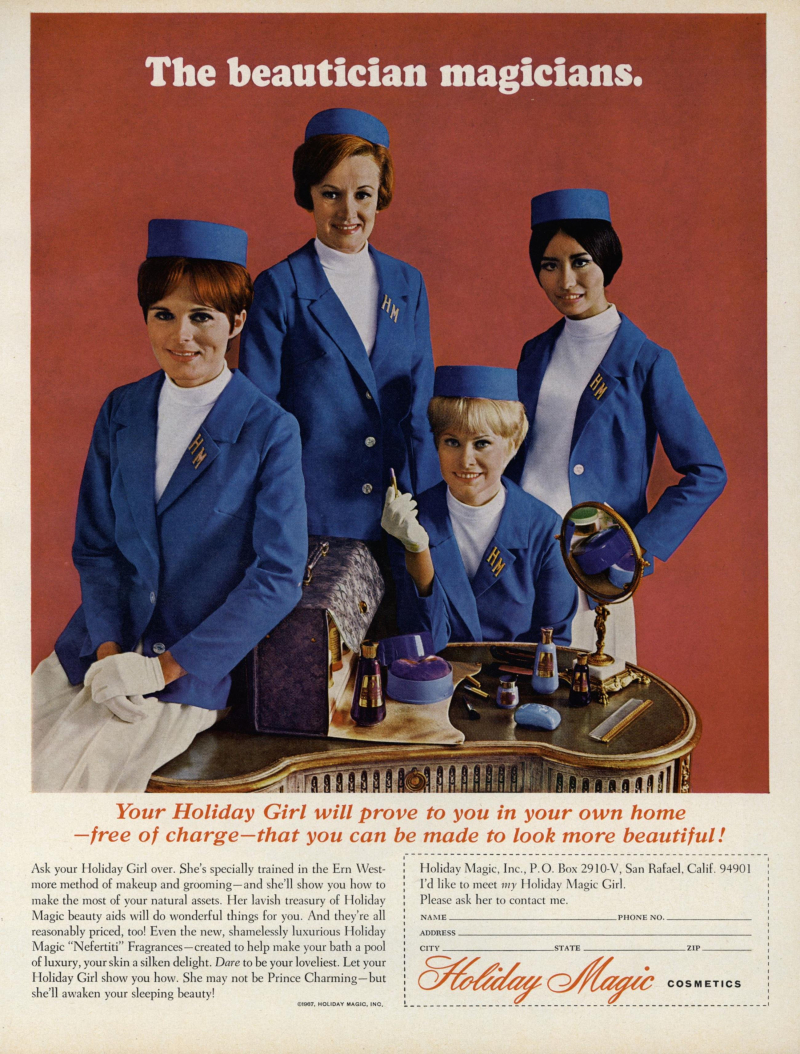 Within a year of its launch, Holiday Magic had made Patrick a millionaire, and by 1967, the company was allegedly earning $6 million per month.  The makeup products were quite average - nothing appears to be innovative about them.  There was the standard eyeshadow, eyeliner, mascara, brow pencil, lipstick and blush.  I would have had my own photos but I have no idea what happened to the objects I purchased from eBay, which sadly has become the norm these days.  (It looks like tracking information was prepared but the package never was actually mailed. I've contacted the seller numerous times and have yet to receive a reply, let alone a refund. I guess William Penn Patrick is still working through others to scam customers from beyond the grave.) 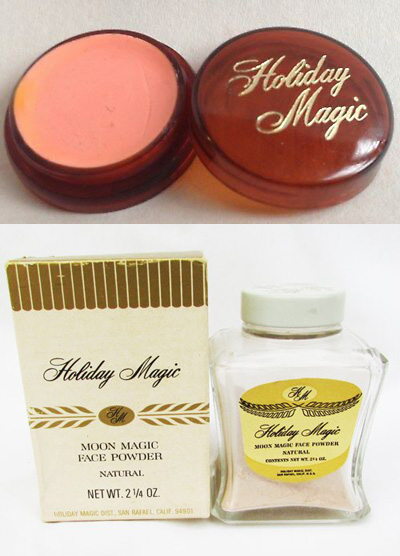 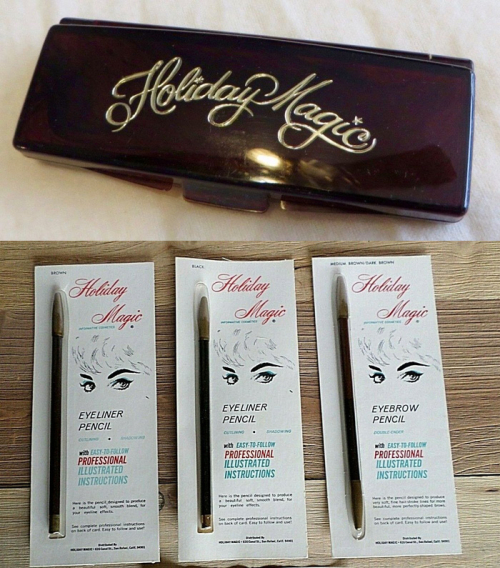 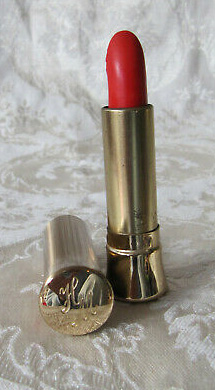 The only thing of interest makeup-wise was the connection to the House of Westmore.  The details aren't clear, but it seems Ern Westmore allowed his facial exercises to be used by Holiday Magic, which may have given an air of legitimacy to the brand. 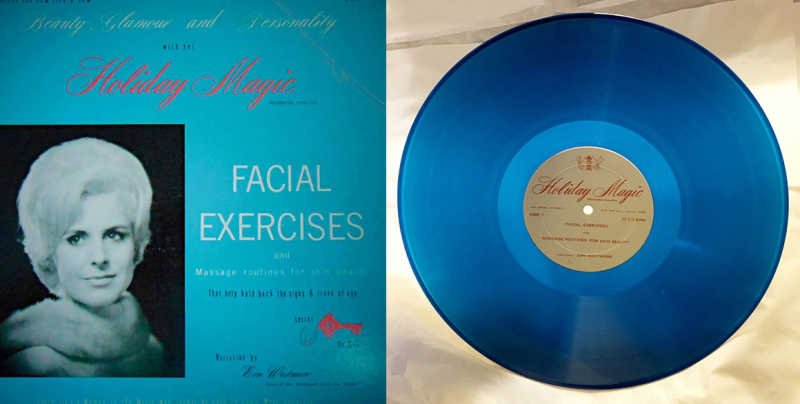 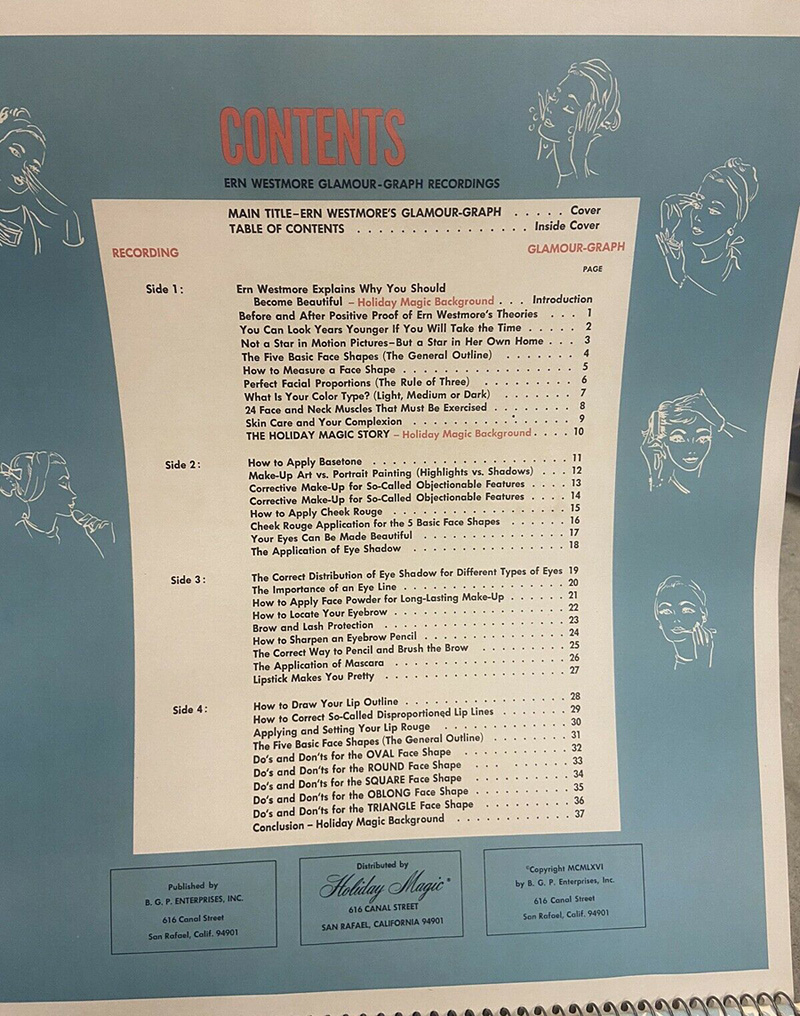 (images from ebay and amazon)

While the makeup itself wasn't all that groundbreaking, the fruit-based skincare was fairly ahead of its time.  The two women who founded Zolene, Helene Fly and Zoe Swanagon (hence the company's moniker, a combo of their first names), were committed to using fresh ingredients without preservatives, and did a lot of research on skincare recipes that had been circulating quite literally for centuries.  They were even writing a cosmetics history book! 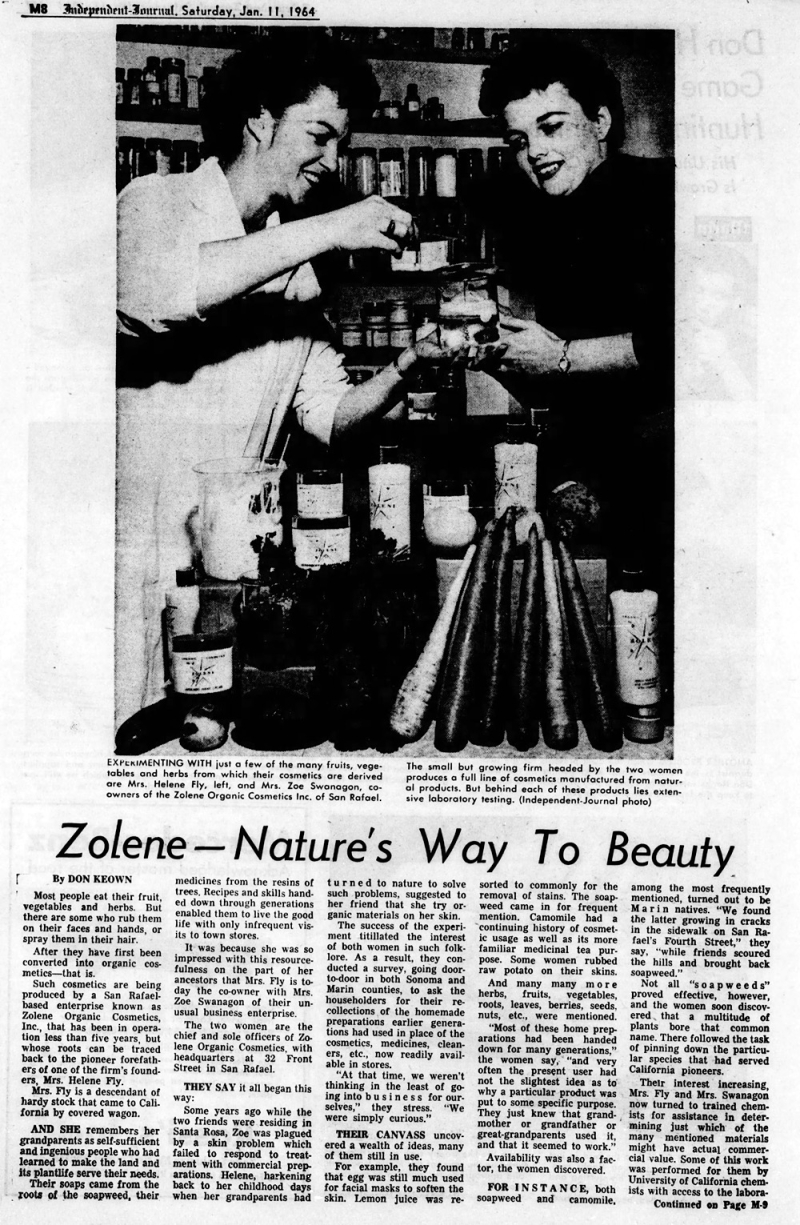 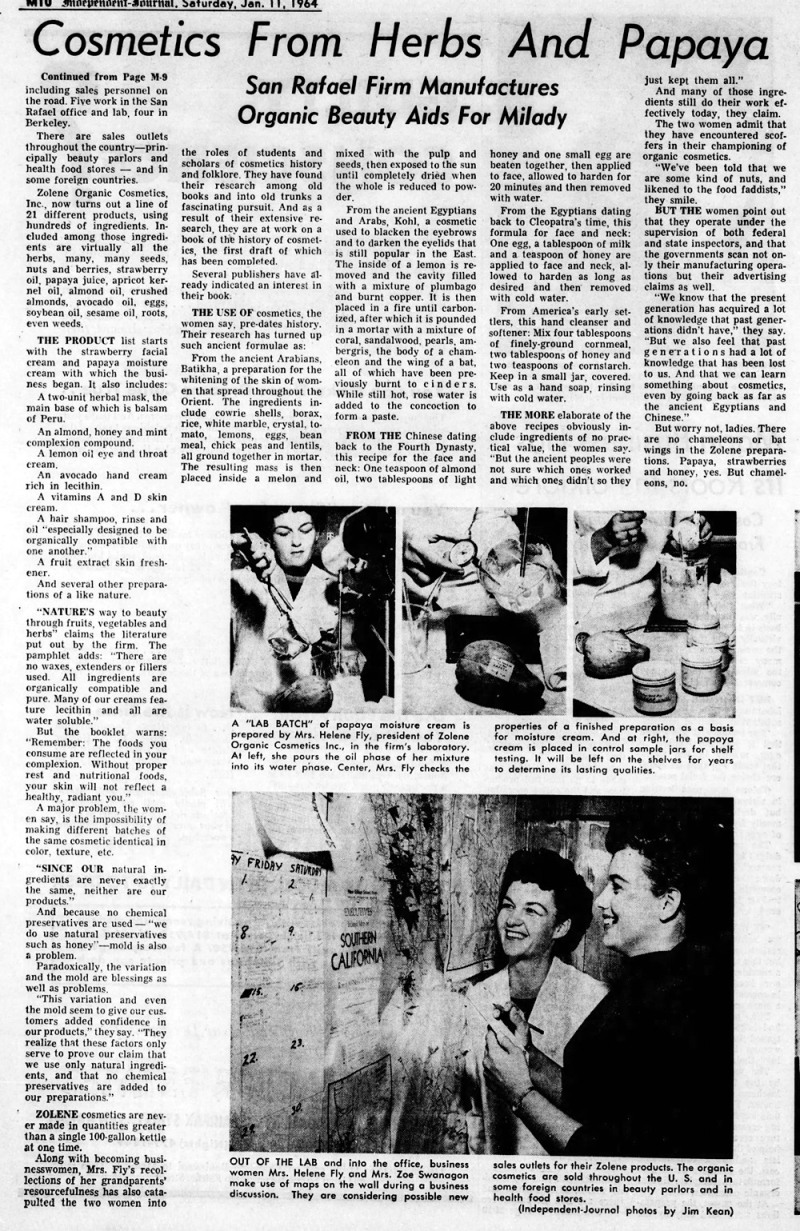 A lot of their products remind me of LUSH or 100% Pure's offerings.  And I really wish I could find them, I love the Mid-Century Modern star packaging.  Anyway, Zolene continued to supply Holiday Magic with its concoctions until 1967 when the founders became aware of Holiday Magic's business practices. But the company's lack of innovative makeup did not deter it from making a fortune for Patrick. In pyramid schemes, profit is not made by selling products but rather recruiting more salespeople - the products themselves have nothing to do with how the money is made, so it doesn't matter if they're any good.  According to The Snapping Point, a website about business scams, the four characteristics that separate pyramid schemes from MLMs are:

This book explains it in more detail.  Basically, the only way for sales reps to make money was not by selling products but through essentially "buying" more sales people, convincing them to make an "investment" in the company.  Unlike regular MLMs, where by the majority of product purchased by sales reps is actually sold to customers, in pyramid schemes most of the product does not reach them.  In Holiday Magic's case, in 1967 it was estimated that 55% of their product was not distributed to customers, with sales reps having entire garages full of makeup.  In 1973, an FTC attorney stated that he could find no evidence of products being sold directly to customers, only to "master" and "general" distributors, while the former president of Holiday Magic, Benjamin Gay, testified that less than 10% of products sold to distributors ever reached customers.  "There could be sawdust in those jars. The cosmetics were there as a front," he said. The way in which Holiday Magic's hierarchy was arranged, Holiday "girls" could invest $18.91, "organizers" $109.71 to $501, "master" distributors $4,500 (plus a $250 training fee that was never mentioned until the investor signed the contract), and "general" distributors $8,750, plus training fees. 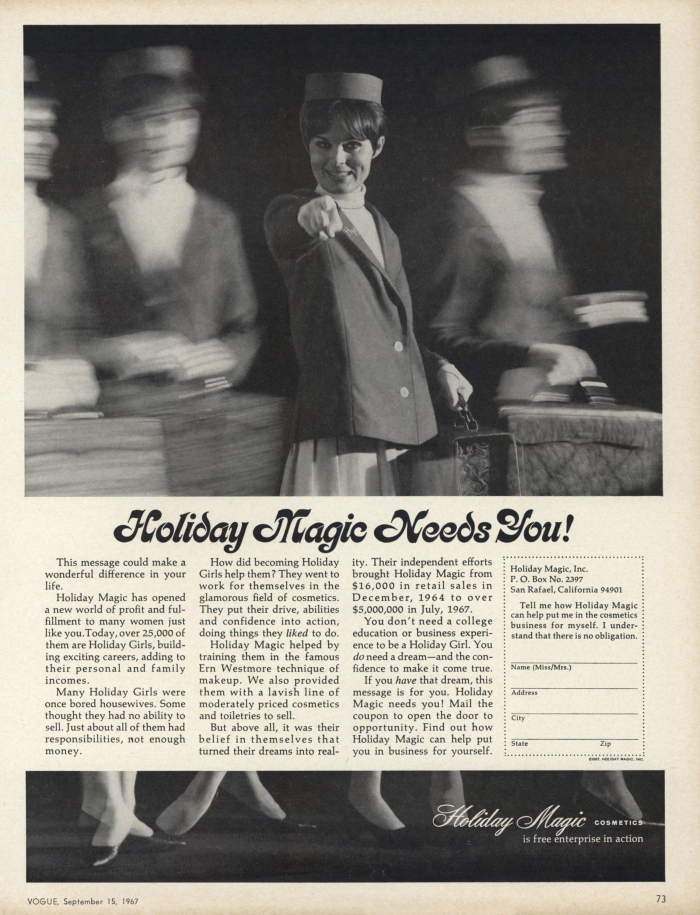 In addition, Patrick was known for other aggressive, highly immoral practices that went beyond pyramid selling. While Holiday Magic did not officially go bankrupt until 1974, as early as 1967 the company was charged by the California State Attorney General's office for "false and misleading advertising" in which the ads claimed distributors could make roughly $2200 a month (or $18,600 nowadays) working full-time. In retaliation, he took out full page newspaper ads attacking the state attorney general. Basically, any time the company faced a legitimate lawsuit, Patrick would double down and countersue, claiming that his constitutional rights were being violated.  But the coup de grace was Leadership Dynamics, a "training institute" for Holiday Magic representatives established by Patrick and then-company president Gay in 1967.  Sales agents were not required but "encouraged" to take a training course for a mere $1,000, while those higher up on the pyramid were required to take courses there.  However, Leadership Dynamics was not so much training as it was torture; according to a 1972 exposé entitled The Pit, among the many cult-like techniques used to humiliate and brainwash sales reps were severe beatings, being locked naked in cages or tied to a cross, forced to sleep in coffins and, of course, racial slurs hurled at the Black attendees. I'm not sure how much of the book is true, but several newspaper articles as well as an article in Newsweek detail the abuse and numerous lawsuits brought about by attendees who supposedly sustained serious injuries.

Patrick also dabbled in politics, running against Ronald Reagan in California's 1966 gubernatorial race as an "ultra-conservative Republican" with the slogan "Stop the Commies at Cal".  Gee, color me shocked that a money-hungry narcissist was the complete opposite of liberal.  His political views are not surprising; many rich white mediocre men truly believe the conservative myth that success is due to hard work (bootstraps!) and brilliance, rather than their own privilege, dumb luck or directly screwing over other people.  Indeed, as one former Holiday Magic employee reminisced in 2016, "The whole organization (or lack of) was absolutely bizzare [sic], run by a bunch of frat boys with not a business degree among them. But they had a Phd in pyramid schemes."  A couple of other tidbits:

A few months after his death and a spate of lawsuits in multiple states, as well as a $5 million suit from Avon, Holiday Magic's new president, along with Patrick's widow, announced that the line would be sold "along conventional marketing lines" and get rid of the pyramid aspect of their sales.  They also promised a "fair" method of reimbursing roughly 3,000 of the Holiday Magic distributors in California who had been swindled.  The SEC's ruling earlier that year claimed that 80,000 individuals had been bilked out of $250 million, so it's not clear what happened to the other 77,000 people who were ripped off. In May 1974 there was a class action settlement of over 31,000 members that established a trust fund of approximately $2.6 million, but that's pennies compared to the actual amount investors lost. Even in 1980 people were still writing to their local paper about the various lawsuits that had been filed and whether they'd get their money back.

But the big issue I wanted to highlight in this sordid tale is the fact that Holiday Magic seemed to have actively sought out Black communities in the U.S. to recruit distributors.  While some other MLMs such as Avon, Fuller and Watkins targeted Black sales reps and customers, in their cases it seemed to be more a matter of expanding their market reach and at least supplying steady jobs rather than overtly preying on marginalized people. (Stay tuned for more about Black people's roles in various MLM cosmetic companies.) 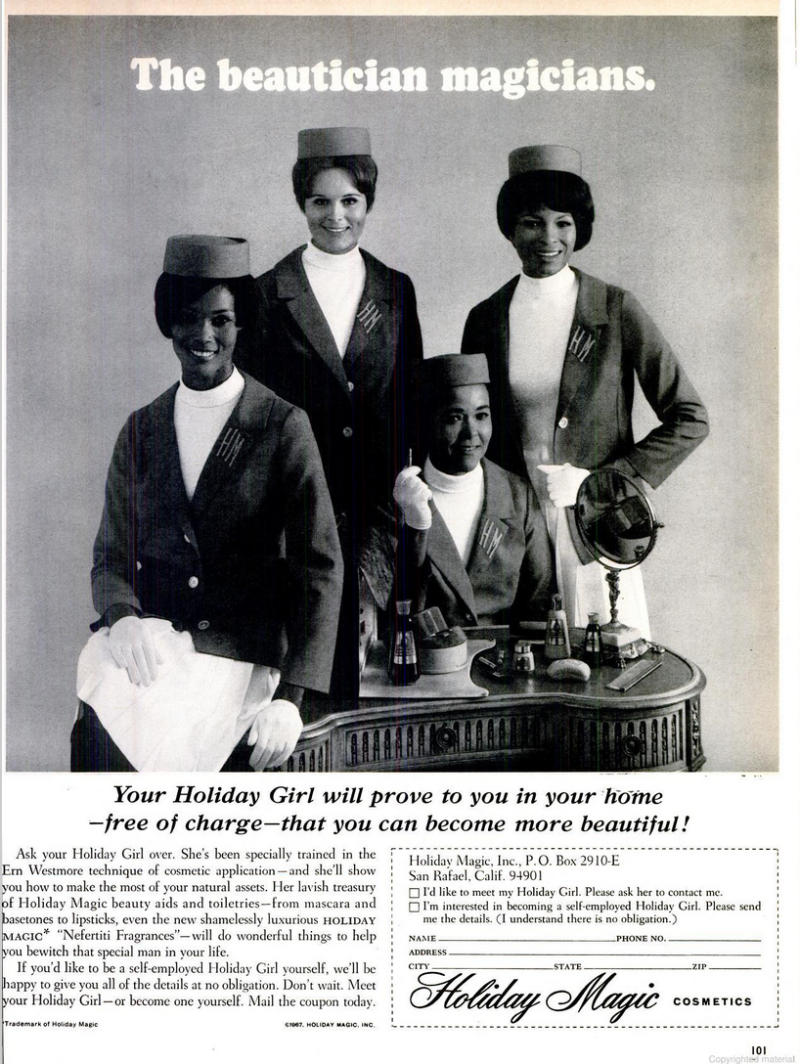 I really wish I could find some numbers to further support my theory, but it appears the scheme disproportionately affected Black and other POC investors.  "The real tragedy is that Holiday Magic appeals to minority people who want to get rich," remarked SEC staff lawyer Louis F. Burke. Patrick bragged in 1968 that 2 of his top 6 distributors in the U.S. were Black, but even if that were true, it's not necessarily a good thing. As a former distributor noted, Holiday Magic's setup was "like being thrown into a dark pit. The only way you can get out is to drag another person into the pit and step on his shoulders." For the most part, Black customers would only be further disenfranchised if they bought into Holiday Magic.  As if that's not bad enough, the company didn't even attempt to formulate any products for deep skin tones. As one wise Black would-be Holiday Magic salesman pointed out in 1975, the line was intended for white people: "Holiday Magic packaged cosmetics for fair-skinned people. Now why in the world would I want to sell light lipstick to Black women?" At least Avon tried to come up with products that would be suitable for Black customers. 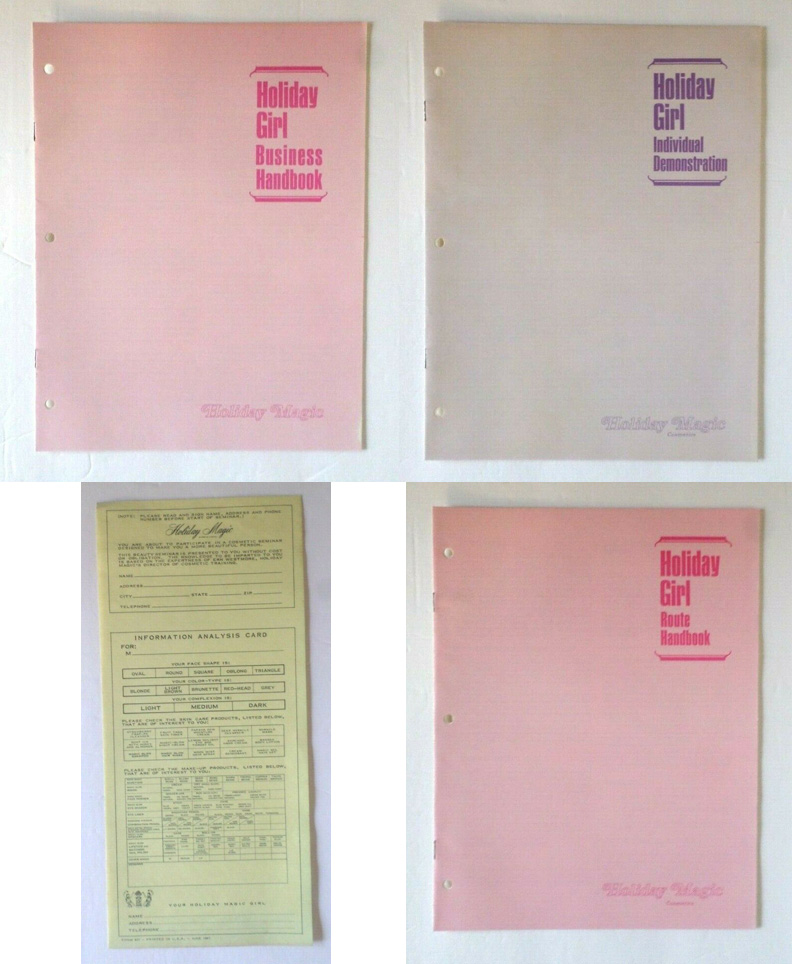 In the UK, it's estimated that the West Indian community lost £33 million in the early 1970s, and 26 people committed suicide after losing everything.  These figures are somewhat corroborated by a British publication called Grassroots, which in 1974 reported that Holiday Magic targeted "almost exclusively West Indian and Asian communities" in the Midlands region.  It's incredibly heartbreaking considering that people were taking out second mortgages on their homes to sink £1,000 into becoming a Holiday Magic distributor, only to end up paying at least double that in the long run and ending up far worse off financially than they were before. Note: I know nothing about this Grassroots publication and have no idea how reliable it is, but I don't think their claims are completely baseless.

It was obvious early on that Patrick was going beyond an MLM and into pyramid scheme territory along with the other illegal sales tactics, yet Holiday Magic was being advertised nationally in well-known publications as late as 1969, and still being sold in pyramid form through 1973. (A new Holiday Magic line with a less deceptive sales model was sold through the mid-'80s.) Perhaps it was a combination of systemic racism and his unbridled wealth that Patrick's sham wasn't stopped before it did so much damage.  Maybe if he targeted only wealthy white people he would have been shut down sooner? Then again, Madoff did just that for about the same amount of time.

Anyway, despite what the show's creators say, I think the short-lived TV series On Becoming a God in Central Florida was based mostly on Holiday Magic - even more so than Amway.  Everything, from the cult-like behavior and "motivational" mantras spewed by Patrick to the garages full of product and targeting of BIPOC communities has an uncanny resemblance to Holiday Magic. 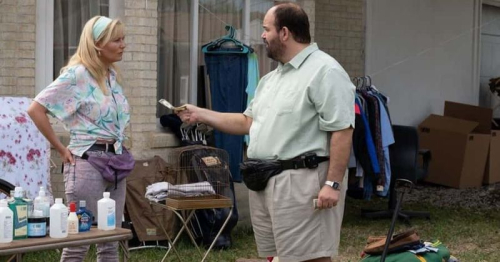 Thoughts?  Had you ever heard of this brand? I promise I have a much more positive story on the way. ;)

Sources:  In addition to the links throughout this post, here are some newspaper articles used.