Makeup Museum ideas for now and the future, 2021 update

It's the time of year where I babble on about things I want to tackle but most likely won't be able to.  I reviewed last year's blog post ideas and out of the 30 topics I only managed to accomplish, let's see, 10.  One-third of what I was aiming for.  Sigh.  As for exhibitions, I only did one and it wasn't all that cerebral. Anyway, no point in ruminating over what I should have done so here's a bit of an update.

In an effort to sort of narrow down the massive amount of exhibition ideas I have, I came up with a priority list of topics that might be doable in the 1-5 years (if the Museum is still in existence) and a secondary list for, well, I have no idea - eventually. I tweaked some of the descriptions as needed.  Also, please keep in mind these are working titles.  Hopefully I can think of better ones!  Once again the husband came up with handy graphics. 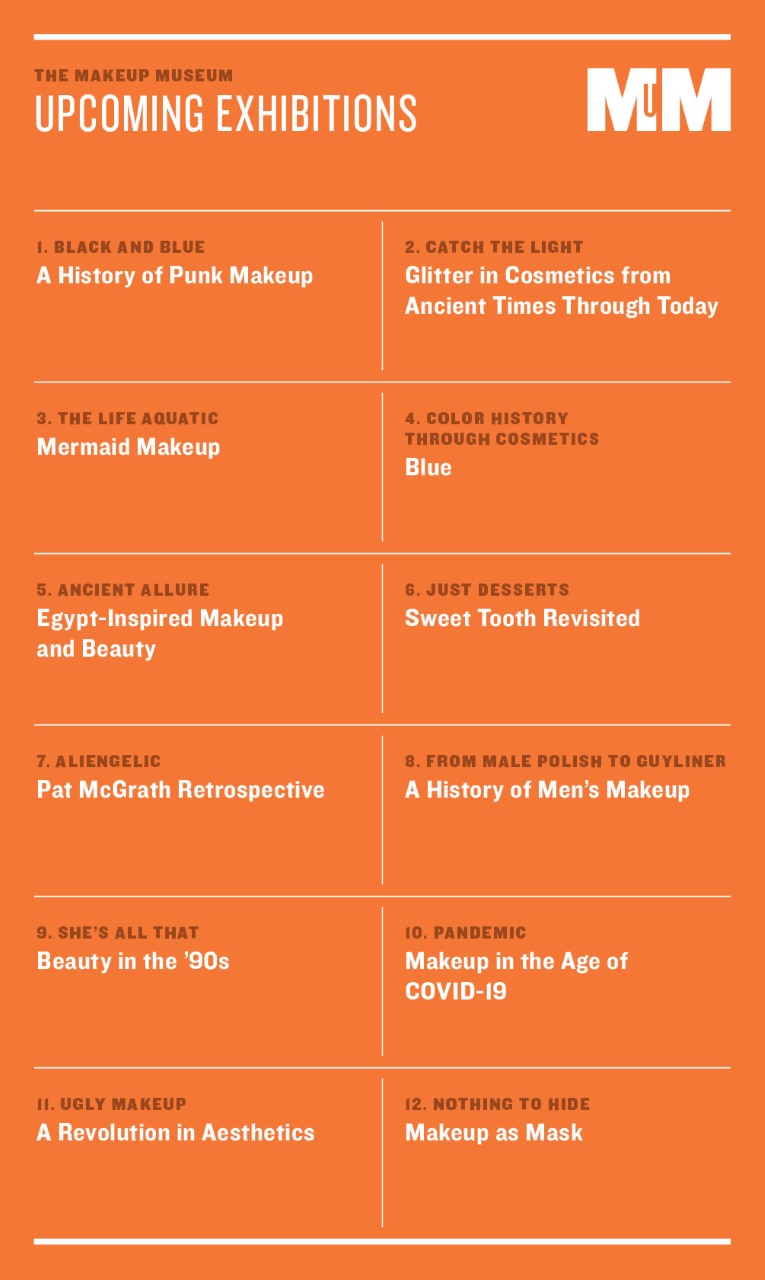 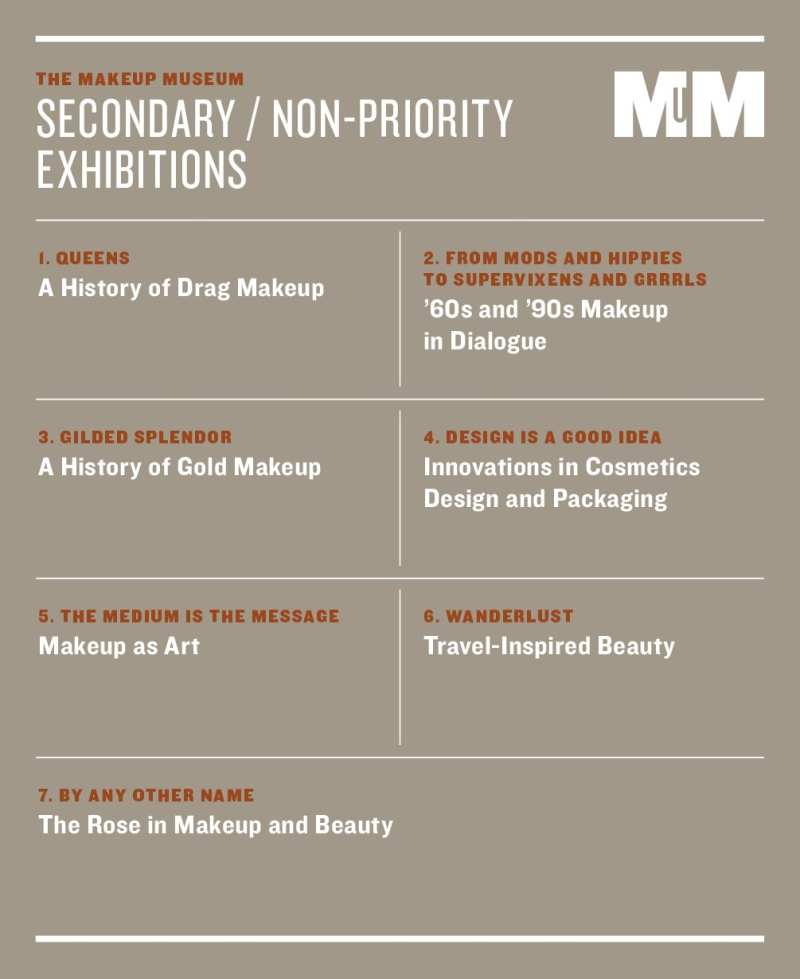 And now for blog posts!

MM Musings (2):  FINALLY getting up the diversity and inclusion in museums post up this month after a year of working on it, and the other topic to tackle this year will be becoming a nonprofit organization.

Makeup as Muse (3):  I managed to get around to covering Gina Beavers last year, but that was it.  The artists on my list are Sylvie Fleury, Rachel Lachowitz, Asa Jungnelius and Tomomi Nishizawa.

MM Mailbag (2-3):  Once again the MM mailbag overflowed in 2020 and most of the inquiries took a significant amount of time to research and answer.  I'll see what might be feasible.

Brief histories (4-5): I still want to go ahead with histories of powder applicators, setting sprays and maybe colored mascara, color-changing cosmetics and how makeup language has evolved (for example, why we typically say "blush" now instead of "rouge" for cheek color.) The author of Cosmetics and Skin kindly suggested an article on copycats, i.e. how companies clearly ripped each other off and continue to do so today in terms of packaging, ad campaigns, etc. which is a great topic.  I'm also interested in a history of Day of the Dead makeup.

Trends (1):  Makeup brand merchandise and swag - another I didn't cover in 2020 as planned. I'm also very interested in the video game trend in makeup, but I'm hoping this amazing person writes about it instead!

Topics to revisit (1-2):  faux freckles, non-traditional lipstick shades, and cultural appropriation in cosmetics advertising. I did not update any of these in 2020 so I hope to do at least one of the three this year.  Also, perhaps a deeper dive into surrealism and makeup.

Vintage (6): series of Dorothy Gray ads featuring portraits of well-to-do "society" ladies, '90s prom makeup, and wear-to-work makeup from the 1970s-90s, defunct '90s and early aughts brands (Benetton, Calvin Klein, Tommy Hilfiger, Nina Ricci and Inoui ID to start with), and a slew of other brand histories, especially Black-owned brands like La Jac and Rose Morgan. I'm also itching to write something about Black salespeople and customers in direct sales companies, i.e. Avon, Mary King by Watkins, Fuller, Artistry by Amway, etc. The company I hope to tackle this month if the objects I purchased on Ebay ever arrive will be Holiday Magic...the story is absolutely bonkers.

Artist collabs (5):  As in 2020 I'm still trying to catch up on some of last year's holiday releases, including Fee Greening for Mikimoto and Cecilia Carlstedt and Morag Myerscough for Bobbi Brown.  There are tons of others from previous years that I'm still thinking about, such as El Seed for MAC, Connor Tingley for NARS, the Shiseido Gallery compacts and lip balms, and a series on the artists whose work appears on Pat McGrath's packaging.

Book reviews (2):  In the interest of saving time and also because my reviews tend to be badly written (even for me), I decided to do regular reviews only for some books and speed reviews of others, combining several books in a single post.  Most of the ones I'm planning on are in the Beauty Library section of the website.

Dream Teams series (1-2):  I did actually start this series last year, albeit without the mockups I had wanted to do.  Stay tuned for more fantasy artist/makeup collabs. I especially want to focus on BIPOC artists and flesh out the idea I had back in 2016 for a Rrose Sélavy-themed collection.

Color Connections (5+): I returned to Color Connections last year but only once.  They just take so much time. However, I've been toying with the idea of putting them as a dedicated series on Instagram separate from the Museum's regular account.  That way it might make me accountable in terms of working on them more regularly.

Finally, there will be lots of other random things popping up, and I have so many people I want to talk to so I hope to nab some interviews and guest posts. :)

And here we have my book ideas.  They're the same as last year.  The first one is an alternate title for the '90s exhibition.  The second one would basically be the accompanying catalogue for the Makeup as Art exhibition.  I still want to do a coffee table book of pretty makeup, but my concern is that it won't be diverse. 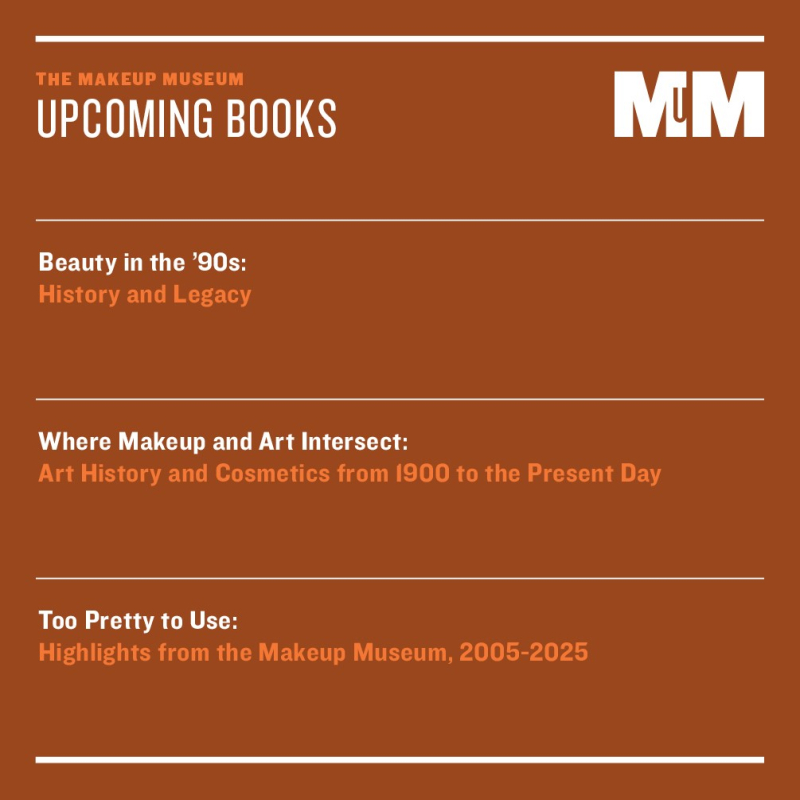 Any of these topics interest you?  Which ones would you like to read about/see first?