I'm doing the #Museum30 challenge on Twitter, and one of the recent prompts was "origin".  It got me thinking about the very first makeup museum.  While I have no definitive answers, it seems the first cosmetics museum, at least in the U.S., dates back to the 1950s.  And there were several others after that but before the Makeup Museum was established. So let's take a quick peek into the origin of the makeup museum and the other spaces that have gone before (along with a a couple that came after).

In October of 1956 it was reported that the House of Cosmetics, a "cosmetics museum and gallery of fame as a historical repository and a tribute to the cosmetics industry", would opening at the former Reed Company on Harrison Street in Newark, NY.  It was financed and operated by Pitkin, a cosmetics manufacturer that distributed the Linda Lee line of cosmetics.  Among other features, the museum would boast special sections for perfume, lipstick ("Lipstick Lane") and powder ("Powder Puff Parade) , along with gigantic sculptures of a perfume bottle, lipstick and powder box on the roof that would light up at night. The collection consisted of objects donated from the public along with memorabilia from the Pitkin company archives.  A perfume fountain at the entrance spouted a brand-new fragrance called Three Coins, created especially for the museum. Visitors would receive samples of the perfume. 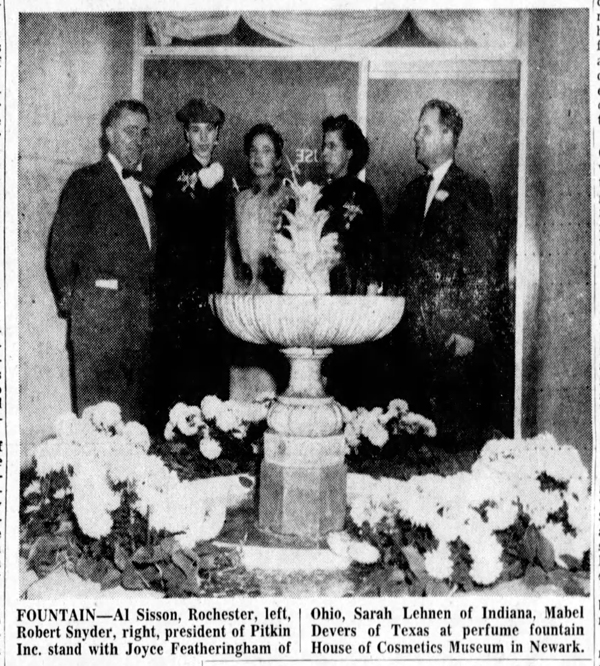 The odd thing about the House of Cosmetics is that it allegedly opened in December of 1956, but there is literally no mention of it after that.  I could not for the life of me find any information on it following its grand opening, so I can only assume it wasn't successful and quietly closed, perhaps because it was too commercial and focused mostly on Pitkin.  The House of Cosmetics was not the vision of a passionate private collector, but that of the current president of Pitkin as a way to raise the company's profile nationwide and celebrate the brand's upcoming 50th anniversary in 1958.  The space prominently featured current Pitkin products and it didn't seem as though there were outside curators or historians involved, plus, only Pitkin employees served as tour guides.  I know many argue that museums should be run like businesses, and it's a conversation for another time, but I really do think that generally entrepreneurs should not be opening museums.

Fast forward to 1979* when the Pacific Cosmetics Museum, also known as the Museum of Cosmetics History, opened in Korea. While it was established by Pacific Chemicals founder Suh Seong Hwan as part of the company's factory in Seoul, the collection reflects the passion and respect Hwan had for Korean cosmetics history. 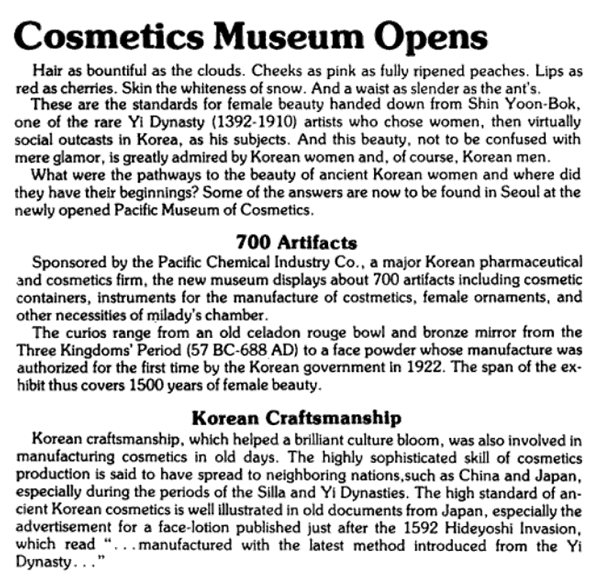 With the help of museum director/curator Chun Wan-gil (Cheon Wan-kil), Hwan continued researching and building the collection, all the while becoming more interested in the cultural aspects of makeup rather than seeing them merely as a way to make money.  Not only did Hwan support the museum, he funded research and publications related to Korean cosmetics history.  According to AmorePacific biographer Han Mi-Ja, "Chun Wan-gil seemed truly to enjoy working for the museum.  He poured all his energy and passion into helping Jangwon [Hwan] with it. As for Jangwon, he was amazed and thrilled to watch how the historic relics seemed to come to life after the hands of Chun Wan-gil touched them.  With his guide, Jangwon was able to build his knowledge and awareness of the historic relics, and grew more committed to the cultural activities...Jangwon thought, learned, and discovered a lot while collecting historic relics, building a museum, and presenting the results of his devotion to the world.  He was filled with a joy and sense of achievement, which were not the same as he had ever felt from his business." 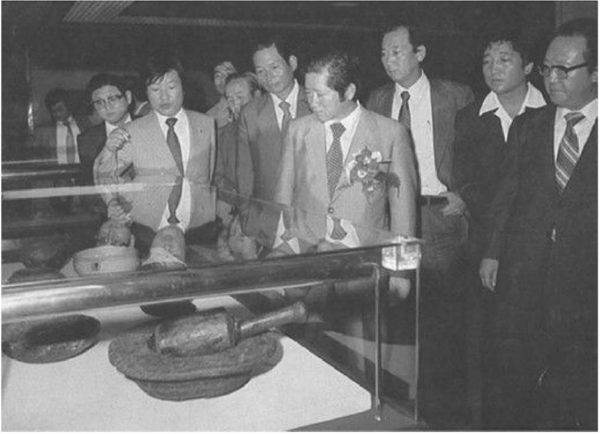 Suh Seong Hwan at the opening of the Pacific Cosmetics Museum in 1979.

In 2009 the museum changed its name to Amorepacific Museum of Art (APMA) and showcases modern and contemporary art rather than cosmetics, although the website states that "it is an institution dedicated to the antiques and artifacts of cosmetics culture in Korea, as well as making a meaningful contribution to local community and education."  I really can't tell whether makeup is actually on display there.  Ditto for the Pola Museum - while it was established by a cosmetics company president in 1976 and has some makeup on display for special exhibitions, I believe the museum focuses mostly on the founder's personal art collection.  So I don't know if either of those really qualify as makeup museums now, but they were at least started that way.

Going back to the U.S., in 1984 the Max Factor Makeup Museum opened in Max Factor's former studio at 1666 N. Highland Avenue in Hollywood, CA.  Overseen by Bob Salvatore, a 23-year employee of Max Factor, the museum offered a veritable treasure trove of Max Factor objects and memorabilia.  From then it's not clear what exactly happened.  Some articles state that the museum closed in 1992, some say 1996; I'm leaning towards 1996 as there are articles from 1995 advertising the museum at that location.  In any case, a portion of the collection ended up at the Hollywood Entertainment Museum, which opened in October 1996 and was located at 7021 Hollywood Blvd.  The collection remained there until 2004, when it landed at its original location, the old Max Factor studio. The famed Art Deco building had been turned into the Hollywood Museum in the summer of 2003.  The Max Factor collection is still there so you can visit (well, maybe if the pandemic ever ends!) 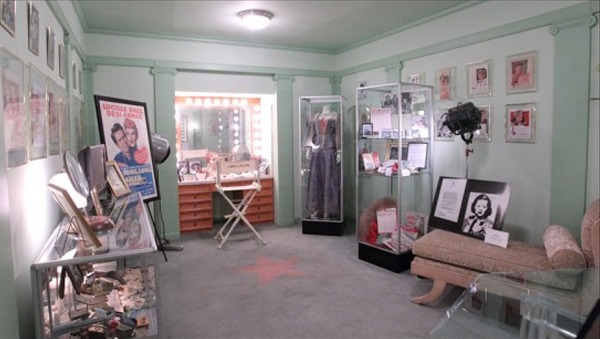 During this time, Shiseido opened their corporate museum in Japan as a way to celebrate the company's 120th anniversary in 1992.  I've written about this one before so I won't rehash it, but you can check out my post.  A decade later, in 2002, an Alabama paper reported on the Avon Fan Club House of one Mira Dawson.  Ms. Dawson was a top seller and avid collector of Avon memorabilia, even dressing like one of the company's co-founders to greet visitors.  She charged $2 for admission to her home, which functioned as the museum.  Here's to home-based museums!! 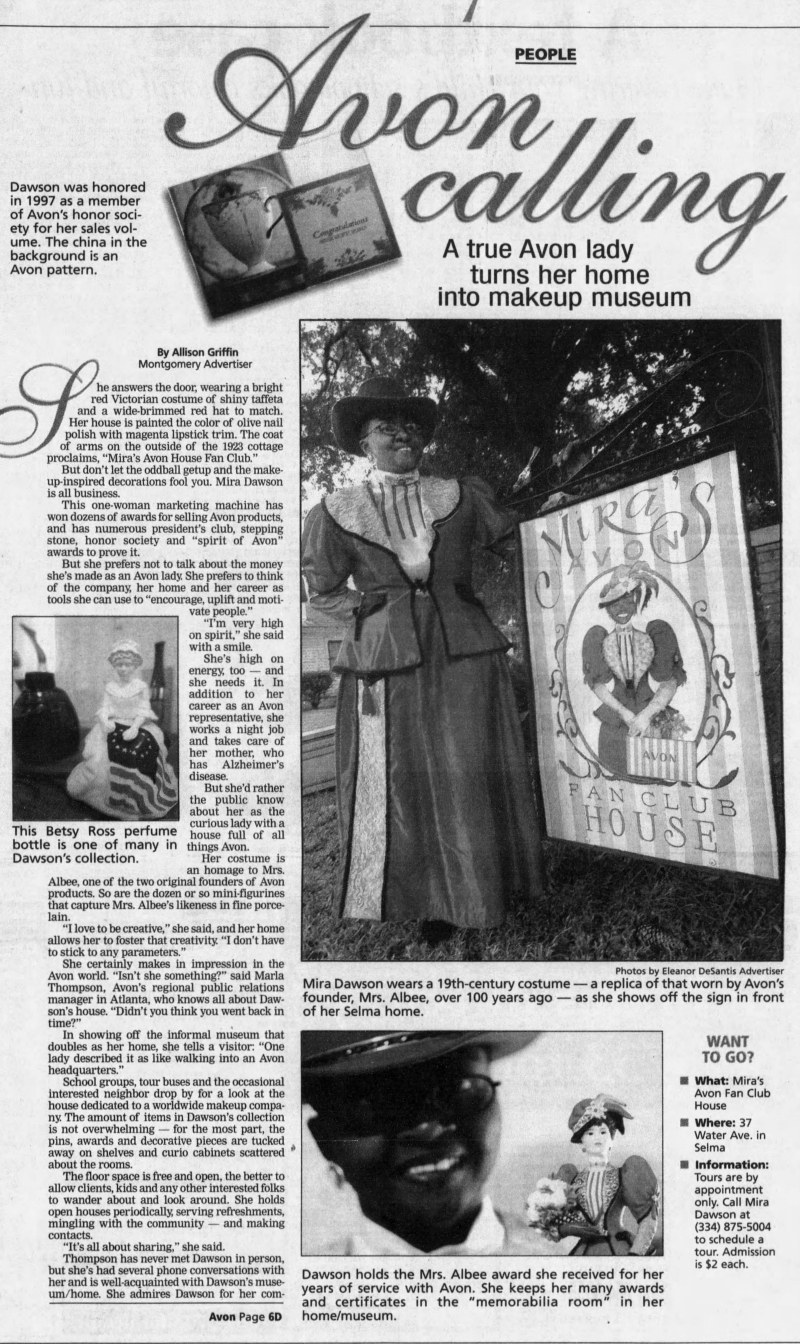 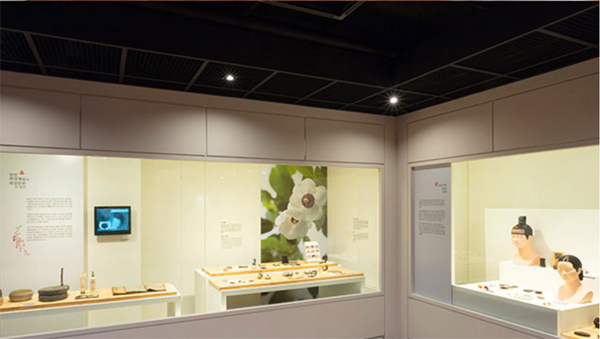 Just a few years later, in 2006 the Beni Museum was established in Tokyo.  I've posted about that previously too so I won't go into it again, but you should really check it out as it's fabulous.  So that takes us to late 2007, when I registered the domain for the Makeup Museum.  Interestingly, on Instagram I got to chatting with the previous owner of the domain!  Oldschoolcosmetics had the idea of a makeup museum all the way back in the '70s and registered the domain around 1995, but realized how difficult it was and ended up walking away from makeup entirely.  Here's what she had to say:  "I first had the idea for a cosmetics museum in the 70s when I became really aware of makeup, brands and how quickly things disappeared from shelves.  My dad had a museum background and my parents took me to museums on every vacation. I started to think seriously about it in the 90s and registered the domain then. There were no odd or new domains then, just .com, .org and .net. I don’t recall if I registered .com or .org or both, but definitely not .net. At the time there was a Max Factor exhibit in the LA area, and at least two active makeup schools there which specialized in special effects and Hollywood film work. I wasn’t as interested in that, but it became obvious that the industry was based in NY and LA, rent would be prohibitive, the industry giants could set up a museum faster than I could, would definitely do so after I started up, anything on display could be permanently ruined if there was a blackout or A/C malfunction, and the bulk of the work would be grant writing, networking and managerial. I abandoned the idea fairly quickly. Ignoring all other beauty like wigs, nails, skincare, fragrance, there was still too much for one building if you showed stage makeup, drag history, failed brands, etc. Back then there were less collabs, less brands, less releases a year, the world wide web was just starting and everything was still paper catalogs, in store displays, etc. Now a museum would have to cover cancel culture, influencers, indie brands, brand owners, many more foreign brands, etc.  I used the domain for a private message board about makeup. I wanted to call it makeup mavens but someone had that name and a brand that used it. This was circa 1995? Eventually I got bored with the industry, the sheeple customers, products that disappointed, etc." 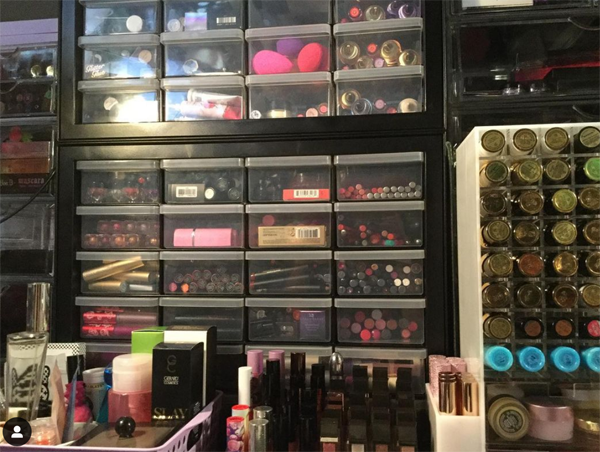 So it was kind of a downer to hear, but that sort of brutal honesty is needed at times, plus it shows I'm not a total failure - it's basically impossible to open a cosmetics museum without any investors or industry connections, or unless you're independently wealthy.  In any case, this person is enthusiastic about makeup again and supports the Makeup Museum.  She has been extremely kind in talking with me about the challenges of opening a physical space and digitizing the collection, particularly as they relate to funding sources.  She has given me quite a few excellent suggestions so hopefully I'll be able to pursue them.  Anyway, in August of 2008 I wrote my first blog post, so I usually consider that to be the Museum's official birthday.

A little bit after the Makeup Museum was established, makeup artist René Koch opened his private collection of lipstick in Berlin to the public in 2009, naturally called the Lipstick Museum. This is still on my must-see list! Known as "Mr. Lipstick", Koch was the head makeup artist for YSL for over 20 years and has amassed a spectacular collection of lipsticks and related memorabilia. 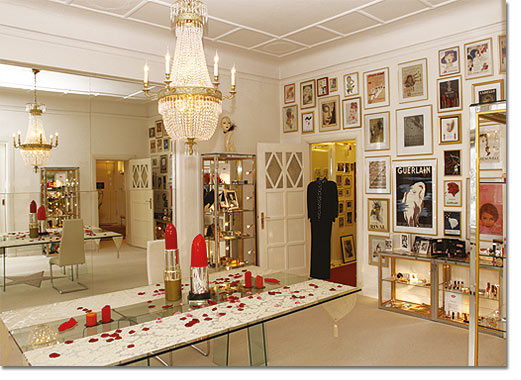 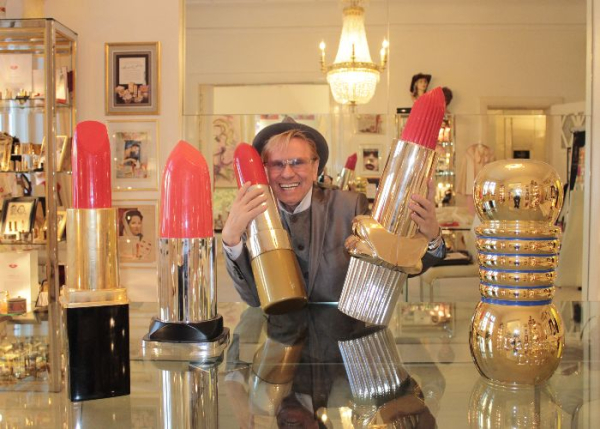 Finally, we have the London Cosmetics Museum, founded by makeup artist Xabier Celaya in 2015.  Like the Makeup Museum, it's an online-only pursuit for now. However, Xabier exhibits his collection at local universities, stores and cosmetology schools, and I'd be very surprised if he doesn't have a public physical space shortly. 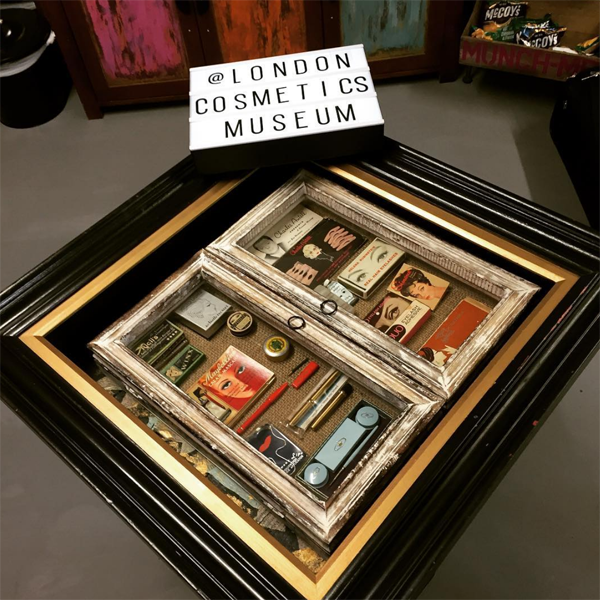 All of this goes to show there's been an interest for many years in exhibiting and preserving makeup history and beauty culture. I certainly was not the first one to have the idea of a cosmetics museum, nor will I be the last - I know of several makeup artists who are actively trying to open their own spaces.  However, if they follow in the footsteps of a certain other entity and claim to be the first, well, you know it's a lie. ;)

*There was a museum started by the president of Merle Norman Cosmetics in 1972, but I believe it was just a private collection of his cars and other non-makeup objects.

Posted at 04:58 PM in Exhibitions and museums | Permalink | 0 comments