An exhibition of royal makeup (that you might be able to buy): Princess Hwahyeop

Here's more makeup awesomeness from Korea.  As usual I completely forget what I was looking for when I stumbled across a couple of articles describing the discovery of cosmetic containers in the tomb of an 18th-century princess, but it was so interesting I had to share right away.  Princess Hwahyeop (1733-1752) was the seventh daughter of King Yeongjo, 21st ruler of the Joseon dynasty (1392-1910).  Her burial site was discovered 5 years ago and included a variety of cosmetics containers. The containers were already incredibly culturally and historically significant, but researchers noticed there was still some residue in the jars, a very rare find.  This provided clues about the type of makeup and skincare they contained, thereby shedding more light on 18th-century beauty culture.  How exciting!

We'll start at the beginning.*  In August 2015 a farmer living in Namyangju City, about 14 miles north of Seoul, came across a stone box buried in a onion field on her property. The farmer, Kim Jeong-hee, called the Korea Institute of Heritage, which unearthed the box in November that year but was unable to complete the excavation due to a lack of funding. Finally the Cultural Heritage Administration (CHA) provided support to finish the excavation in December 2016.  The box turned out to contain burial objects for the princess's husband, Shin Gwang-su. From there other items were discovered, including stone tablets identifying the tomb as that of Princess Hwahyeop and, of the course, the jackpot:  a box made of lime cement containing a bronze mirror still in its embroidered pouch, brow ink (!), combs and 12 small porcelain and wooden cosmetic containers. There was also a small black stick that may have been used to apply blush. I wish there was a photo because I can't see applying blush of any kind with a stick, so I'm wondering if it was actually for the brow ink.  The objects were stored in the National Palace Museum of Korea until they could be tested. 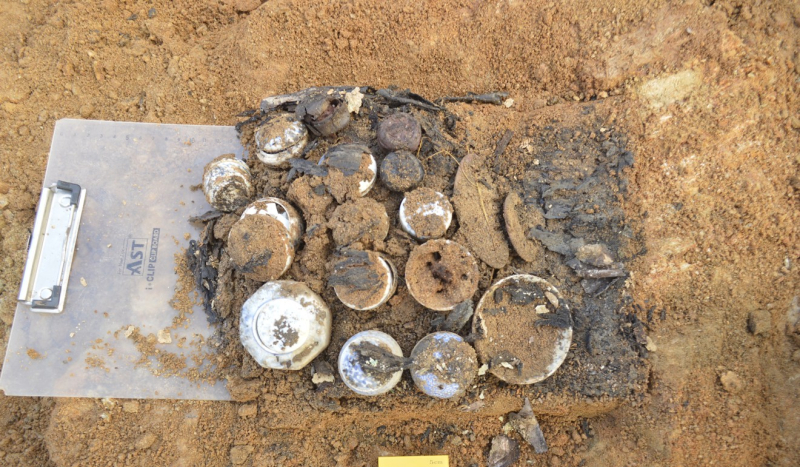 In 2017 the substances found inside the containers were finally went to the lab. The results aligned with our knowledge of women's beauty regimens during the Joseon era. Confucianism was the primary philosophy and promoted natural beauty as ideal beauty, so most women generally adhered to a minimal look with an emphasis on fair, light skin. This meant more effort was put into skincare and less on makeup.  While it wasn't found in the containers, women typically applied miansu, a facial water or essence in today's terminology.  This was followed by myeonyak, a sort of moisturizer/skin protector/primer hybrid made from beeswax and other ingredients such as camellia oil and kelp. After that, face powder and blush would be applied. Traces of beeswax and red pigment made from safflower and cinnabar were found in the containers, so it appears that the princess used moisturizer and blush.  She also used white face powder, as evidenced by lead and talc residue. Lead-based face paint and powder were traditionally used by aristocratic women, while those in lower social strata used a rice-based powder called baekbun.  So it seems that royalty tended to mix non-harmful ingredients with poisonous ones to make for a more effective and long-lasting product, but perhaps they were also trying to find a way to offset the negative effects. One container was found to have crushed ants suspended in acetate.  Kim Hyo-yun, researcher at the National Palace Museum, speculates that “because of their formic acid, ants might have been put in acetate to be used as a skin treatment to treat skin troubles caused by those toxic cosmetics." 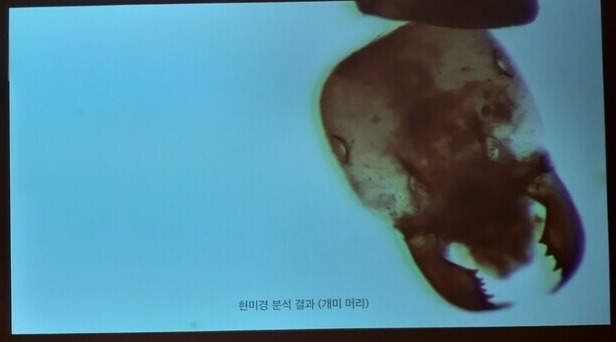 Last October the National Palace Museum held a special exhibition displaying the princess's cosmetics, along with a seminar that brought together cosmetic ingredient experts from China, Japan and France. 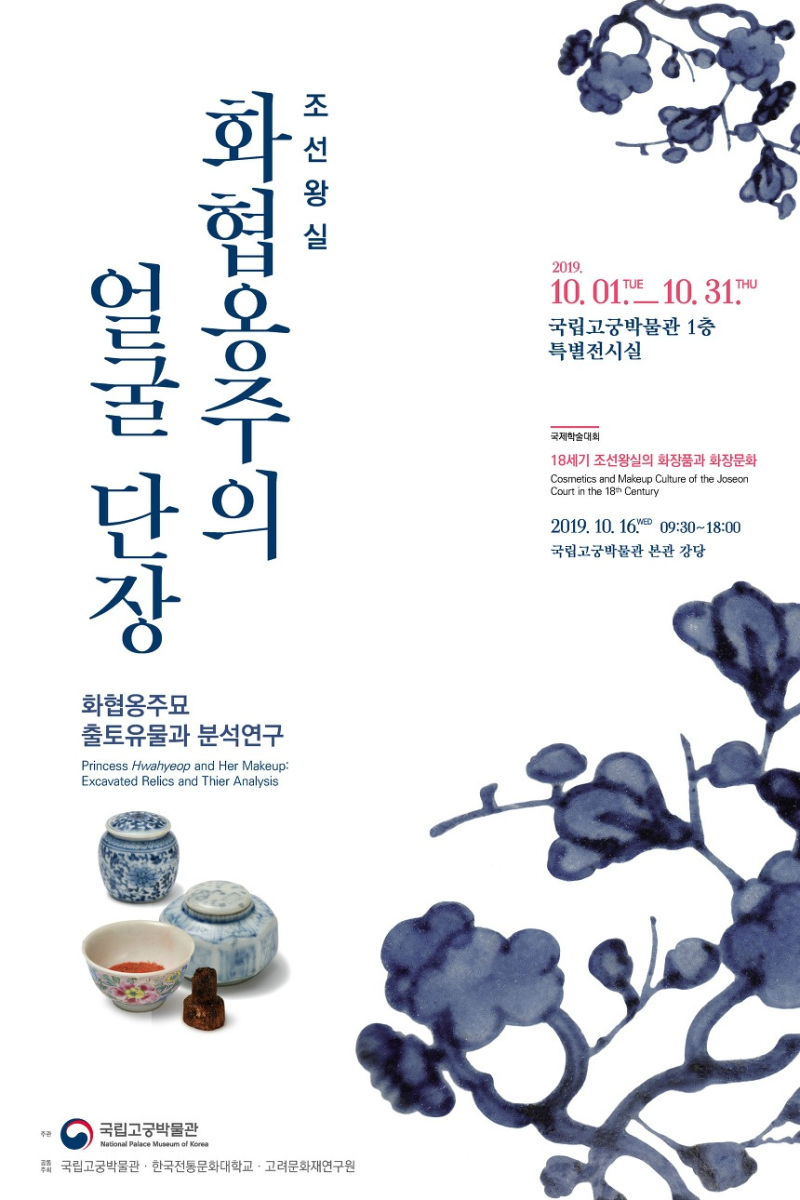 How beautiful are the containers?  The blue pigment was made with cobalt, which was imported to China from Persia during the Joseon dynasty's rule.  Due to its high cost - it was even more expensive than gold - it was reserved exclusively for use by the royal court.  The motifs included pine trees, dragons, and a variety of flowers such as chrysanthemums, lotuses, azaleas, plum blossoms and peonies.  Also, only one of the jars were made by Bunwon, the official kiln of the Joseon rulers. The others were Jingdezhen ware from China and Arita ware, a type of porcelain from Japan. 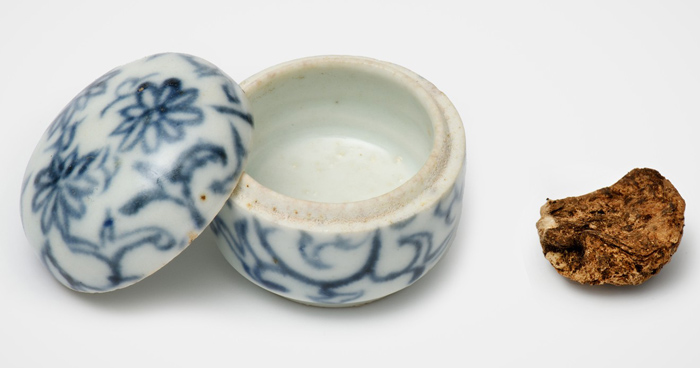 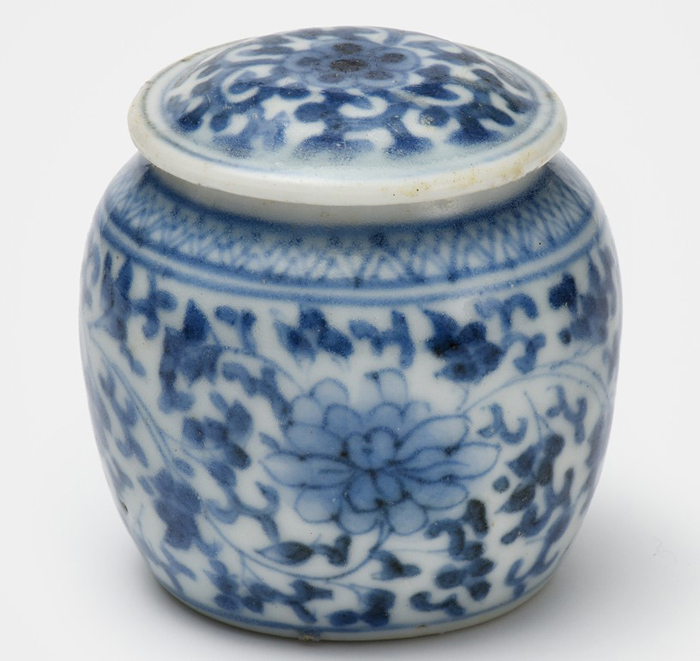 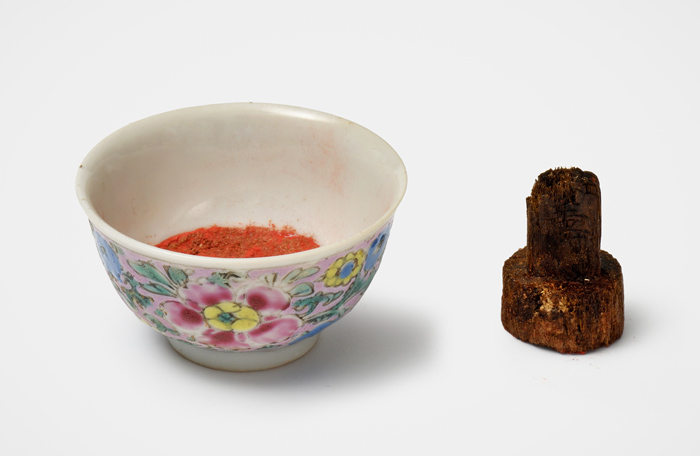 I would have given my eye teeth to attend. You can see the conference program here, and there's also this documentary/reenactment that shows researchers discussing their findings when recreating the formulas as well as actors imagining the beauty routines of the royal family and how they contrasted with those in China and Japan. (I think...the description is in English but the video itself is in Korean so I'm not 100% sure.)

But the story doesn't end there.  Last week the National Palace Museum announced that they would be collaborating with Korea National University of Cultural Heritage and local cosmetics manufacturer Cosmax to launch a hand cream, foundation and lip color based on the artifacts found in Princess Hwahyeop's tomb.  The products will be formulated with modern ingredients but will also contain some of the ones found in the containers (safflower, beeswax). And obviously they will omit the poisonous materials, along with the crushed ants. 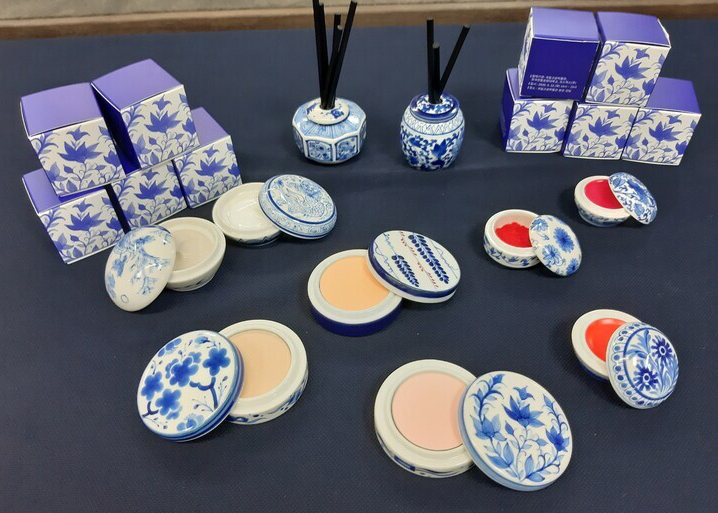 The packaging appears to be gorgeous reinterpretations of the original containers.  The prototypes shown here are ceramic, but as porcelain doesn't preserve makeup very well the final packaging will be plastic.  The collection will initially be sold online at the Korea Cultural Heritage Foundation website, so presumably the proceeds will support the organization.  Once the COVID situation improves the collection will be sold at duty-free stores and museum gift shops. The line will also be affordable (think drugstore pricing vs. department store) but there are plans to expand into higher end products as well. 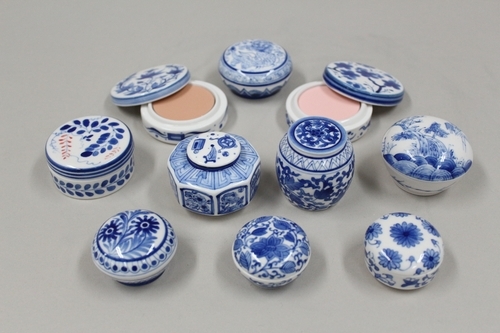 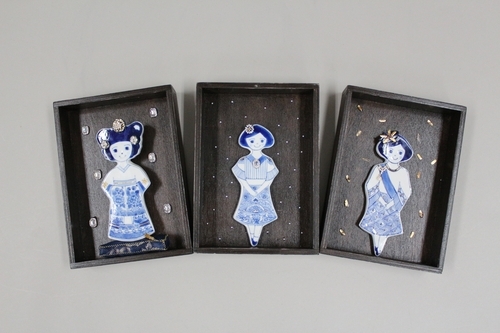 For the most part, I think this is a great idea.  It brings about fresh awareness of makeup history and helps preserve cultural heritage, and the objects themselves are beautiful.  I do think it's a little weird to market a makeup line based on such a tragic figure.  Princess Hwahyeop may have been royalty, but her life didn't sound fun despite her luxurious beauty products.  She was married at the age of 11 and died at 19 from measles. I mean, I know things were different back then but being a child bride and then dying when not even out of one's teens seems quite sad.  I also think it's a little tacky that they trademarked the Princess's full name - the brand is literally called Princess Hwahyeop - but then again, I'm not sure what else you'd call a line whose entire basis is a particular princess. In any case, her burial site was an amazing find for cosmetics history.

What do you think?  Would you buy the Princess Hwahyeop collection if it was readily available?  The line will be released in November and I'm trying to figure out a way to get my hands on it. I have personal shoppers and online buddies who can get me things in 5 countries but not Korea!

*In addition to the links provided throughout this post, I cobbled it together from a bunch of different articles online.  Additional sources for info and images: