A visit from the future and past: Paul & Joe x Doraemon

I distinctly remember ordering this Paul & Joe collection in April of 2019, as my dad was still in the ICU and I felt guilty for taking a few minutes to place an order before visiting him.  But I knew the collection would sell out immediately so I had to go for it.  Adorable though it is, I kept putting writing about it until this year, and then when I finally got around to doing some research I discovered this little guy's birthday is September 3, 2112 so I waited a bit more (although obviously I couldn't hold off for another 92 years unless cryogenics actually worked.)  Please give a warm welcome to Doraemon, a robotic cat from the future! 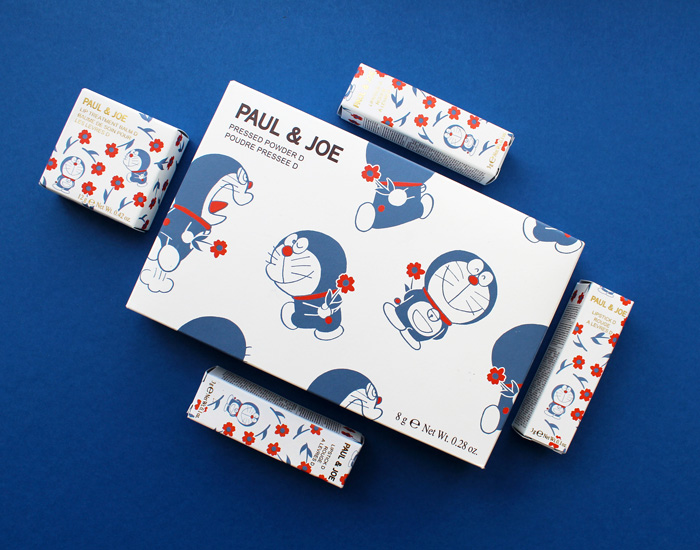 Doraemon is a manga series created by a duo of Japanese writers Hiroshi Fujimoto and Motoo Abiko, better known by their pen name, Fujiko Fujio, in 1969.   Fujimoto was inspired by three specific events:  his wish for a machine that would come up with ideas for his writing, his daughter's toy that caused him to trip, and the sound of some neighborhood cats fighting.  The story chronicles the misadventures of Nobita Nobi, a preteen boy who is described as goodhearted and kind yet lazy.  He gets bad grades due to his laziness and is frequently bullied. Doraemon is sent back from the future by Nobita's great great grandson, Sewashi Nobi, to help Nobita grow up to be successful and alter history so that his descendants will be more prosperous.  However, since Nobita's misfortunes continue as an adult which affects his future offspring, Sewashi is poor, so he can only afford a mediocre and not particularly helpful robot. 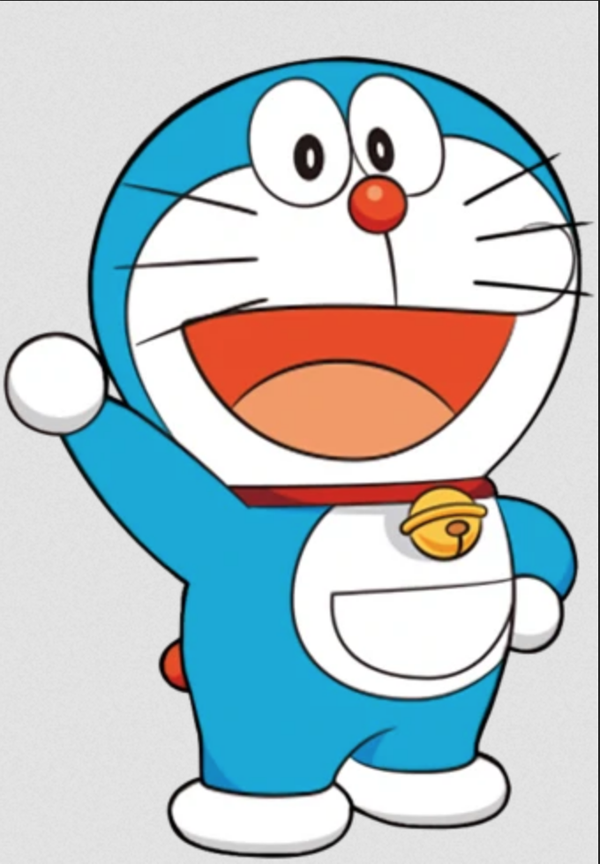 That premise sounds interesting in and of itself, but there's more. Doraemon has a special four-dimensional pouch on his tummy where he stores various futuristic gadgets intended to help Nobita.  Some examples, according to the Doraemon Wiki page: "Bamboo-Copter, a small piece of headgear that can allow its users to fly; the Anywhere Door, a pink-colored door that allows people to travel according to the thoughts of the person who turns the knob; Time Kerchief, a handkerchief that can turn an object new or old or a person young or old; Translator Tool, a cuboid jelly that can allow people to converse in any language across the universe; Designer Camera, a camera that produces dresses."  These sound like fantastic ideas, but you can see where they're heading. While the devices were supposed to make Nobita more successful, the series focuses on the hijinks that ensue as he uses them incorrectly or for the wrong purposes. 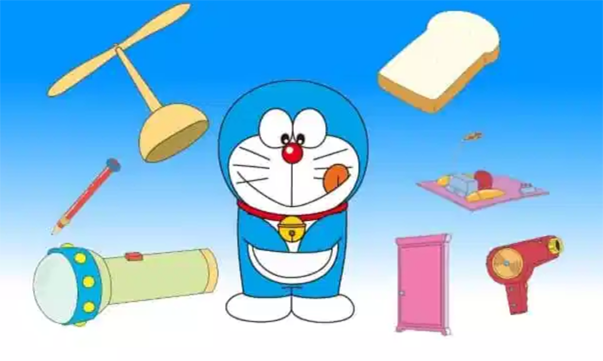 As with nearly all the protagonists in Japanese series, Doraemon's character is carefully conceived with a complete backstory.  The "Dora" part of his name derives from "dora neko" (stray cat), while "-emon" is an archaic suffix for male names - just Fujimoto having a bit of fun by giving a character from the future an obsolete moniker.  The reason for Doraemon's blue color and rounded head is that shortly after his creation in the robot factory, a mouse nibbled his ears off and frightened Doraemon so badly he turned blue - he was originally yellow in color. Poor thing! As for Paul & Joe, they spared no details.  All of the products are covered in a delightful floral print featuring Doraemon in a variety of poses. 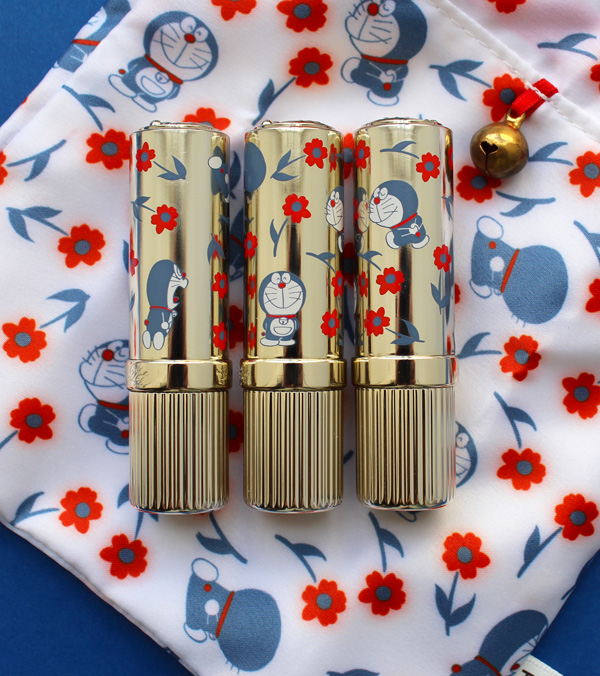 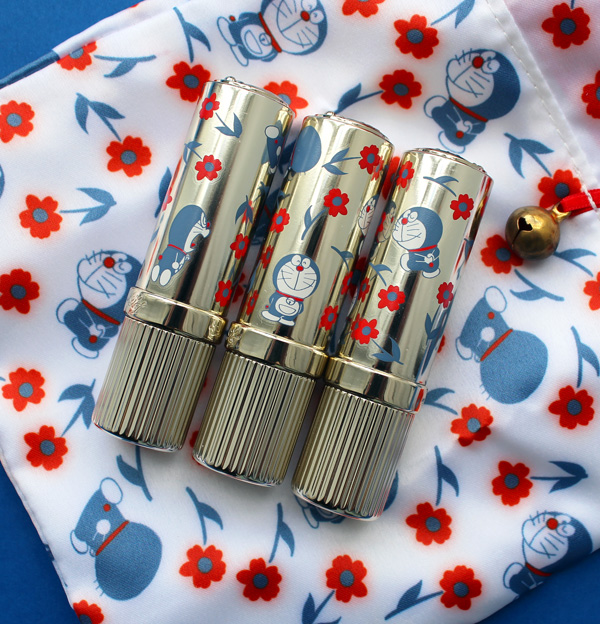 The lipstick caps as well as the lipsticks themselves are engraved with Doraemon's face.  These lipsticks, you might recall, use a technique known as kintaro-ame. How cute is the embossing?!  And the bell on the pouch recalls the one Doraemon wears around his neck. 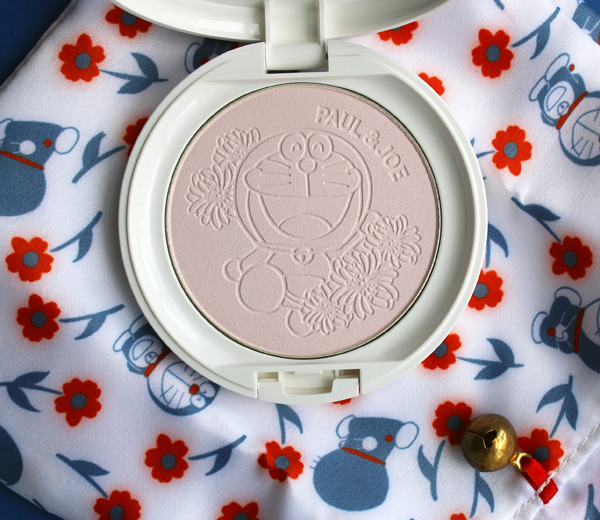 This is perhaps my favorite piece of the whole collection.  Not only is the outline precious, the balm is scented like dorayaki, pancakes filled with a sweet red bean paste that are Doraemon's favorite snack. 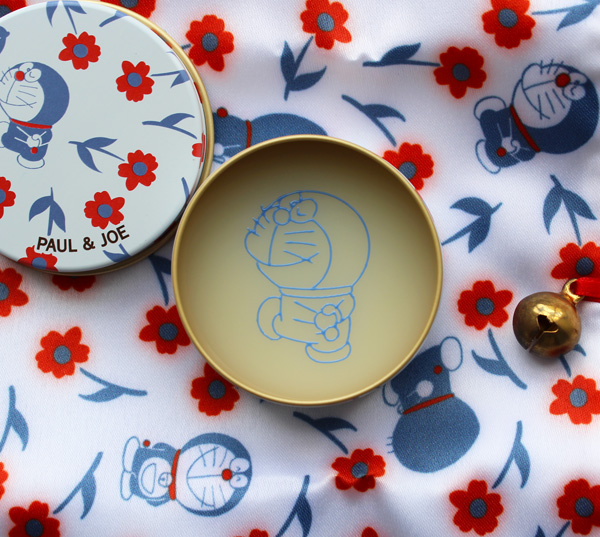 Doraemon's cultural impact cannot be overstated. After 1,465 stories in the original manga and 2,372 episodes between two TV series to date, in his native country the character became as iconic as Mickey Mouse is in the U.S.  The popularity of the Doraemon series in Japan can be attributed to several factors, such as the dawn of a new technological age in the late 1960s and economic prosperity starting in the late '70s (the first animated Doraemon show premiered in 1979).  And while it was intended for children, it's also relatable for Japanese adults, whose workaholic culture perhaps makes them envious of Nobita's lackadaisical style. However, Doraemon's appeal is universal. Despite varied receptions in different countries, people from all over the globe generally identify with Nobita's struggles and Doraemon's attempts to help.  As Caitlin Casiello, a Yale Ph.D. candidate in Japanese and film and media studies, explains to the Japan Times, "A lot of the appeal of 'Doraemon' is actually that Nobita is so familiar and relatable — he’s average, goofy, lazy, a bit uncool, but still a good kid — so we recognize him. Therefore, Doraemon would be our friend, too. This contrast between a normal boy and time-traveling robot cat makes us feel connected to Doraemon, like participants in their adventures." 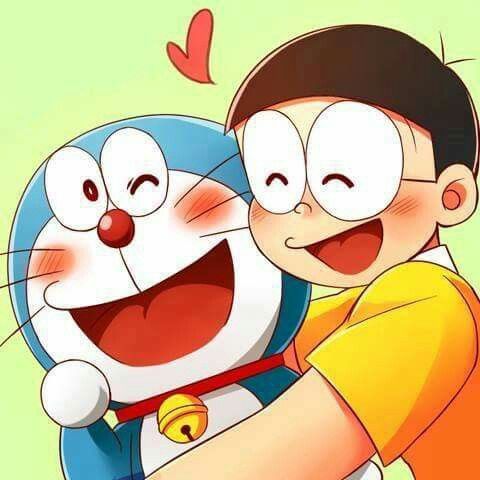 As with Sanrio characters, there are literally thousands of Doraemon-branded products and collaborations, which raked in $5.6 billion in sales as of 2016. Even Takashi Murakami got in on the Doraemon action. 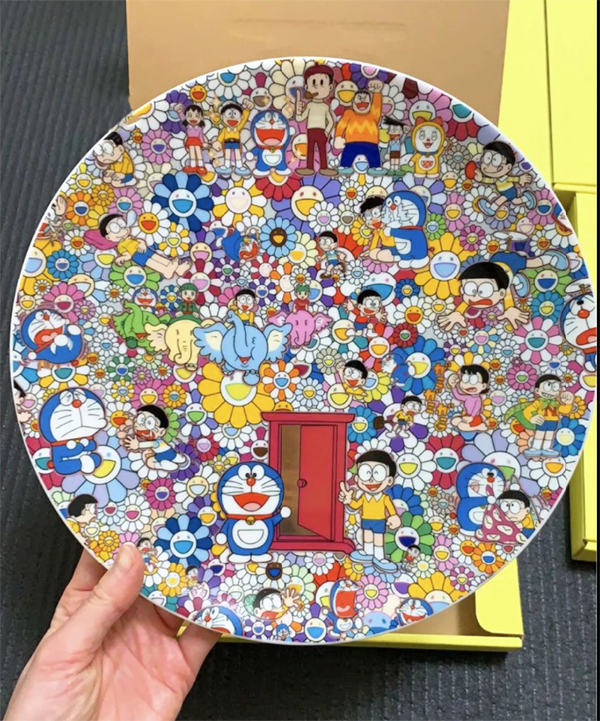 Naturally I checked to see if there was a Doraemon museum since Japan seems to have one for everything, and lo! There is a Doraemon museum a mere 30 minutes outside Tokyo. The museum is technically named the Fujiko Fujio Museum after Doraemon's creators. The displays run the gamut of original sketches and a recreation of Hiroshi Fujimoto's study to a life-size Anywhere Door. 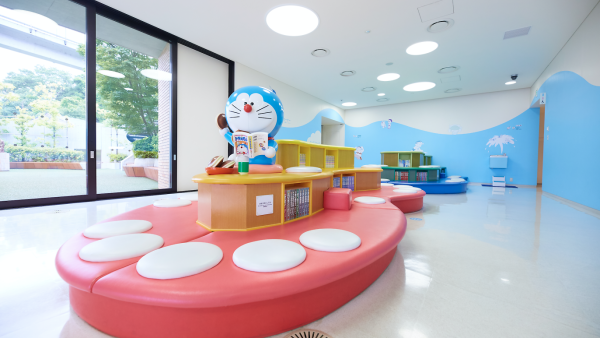 Speaking of collabs, if you think Paul & Joe's collection is the first makeup brand to feature Doraemon, you would be mistaken.  In the fall of 2015 Korean brand A'Pieu unveiled a Doraemon collection.  The Paul & Joe one is different not just in terms of packaging but in the product lineup.  A'Pieu offered eyeshadow palettes, cushion compacts and lip gloss and also incorporated Doraemon's younger sister Dorami in the packaging. To sum up, the Doraemon collection is absolutely on brand for Paul & Joe, given their previous dalliances in cartoon collaborations, the founder's love of cats, and the fact that Paul & Joe makeup is produced by Japanese company Albion.  Still, I'd love to know more about how the partnership came about and why in 2019, as Doraemon's other "birthday" is 1970 when the manga made its official debut.  In any case, it's adorable and I'm glad I was able to learn about an important Japanese cultural icon from this collection.  And if you missed it, don't despair - word on the street is that a second Paul & Joe Doraemon collection is coming for the holidays. So maybe that will be more appropriate for the series' 50th birthday.

What do you think of this collection?  Had you heard of Doraemon previously?  I obviously had not!  I watched a few clips from the TV series and while he's cute, he did not capture my heart the way another Japanese character did.