Here's another short post since my schedule got completely screwed up...I've been working on some more in-depth things and once again I've completely underestimated how long they were going to take.  But in the meantime, I wanted to share a great piece of makeup history that's right here in Baltimore!  For now, anyway.  I knew about Johns Hopkins University's Homewood Museum, but had no idea they also had an extensive archaeological museum.  In 2010 they were the fortunate recipients of a long-term loan of the Myers Collection from Eton College.  The collection consists of nearly 2,000 ancient Egyptian objects, including cosmetic artifacts. A special exhibition, Providing for the Afterlife:  Ancient Egyptian Works from Eton College, highlighted some of these magnificent specimens. 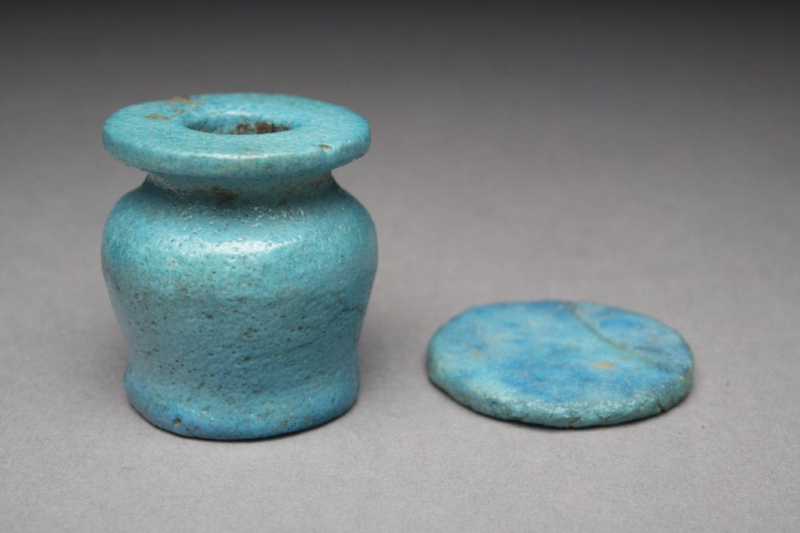 While it's not clear whether these items were intended for this life or the next, it's entirely possible they were entombed with their owners to prepare them in the afterlife.  The next time someone tells you makeup is frivolous, kindly direct them to this exhibition.  Egyptians thought cosmetics were such a necessity that they went out of their way to ensure the deceased would still be able to access them, right alongside representations of food and water production.  As Hopkins graduate Dr. Ashley Fiutko Arico points out, "Items associated with personal adornment, such as the cosmetic items displayed here, were particularly favored. Many of these examples were expertly crafted luxury goods of intrinsic beauty. Although it is unknown whether or not the specific examples on display here were buried with their owners, numerous examples like them have been found in funerary contexts, suggesting that this was likely the case. A selection of cosmetic vessels in a variety of shapes and materials evokes the importance attached to makeup, scented oils, and ointments."

This is a pretty nifty wood and ivory kohl tube with a swivel lid.  As we know, kohl was used for both cosmetic and medicinal purposes, helping to shield one's eyes from insects and the sun's glare.

How elegant is this palm column-shaped kohl tube? 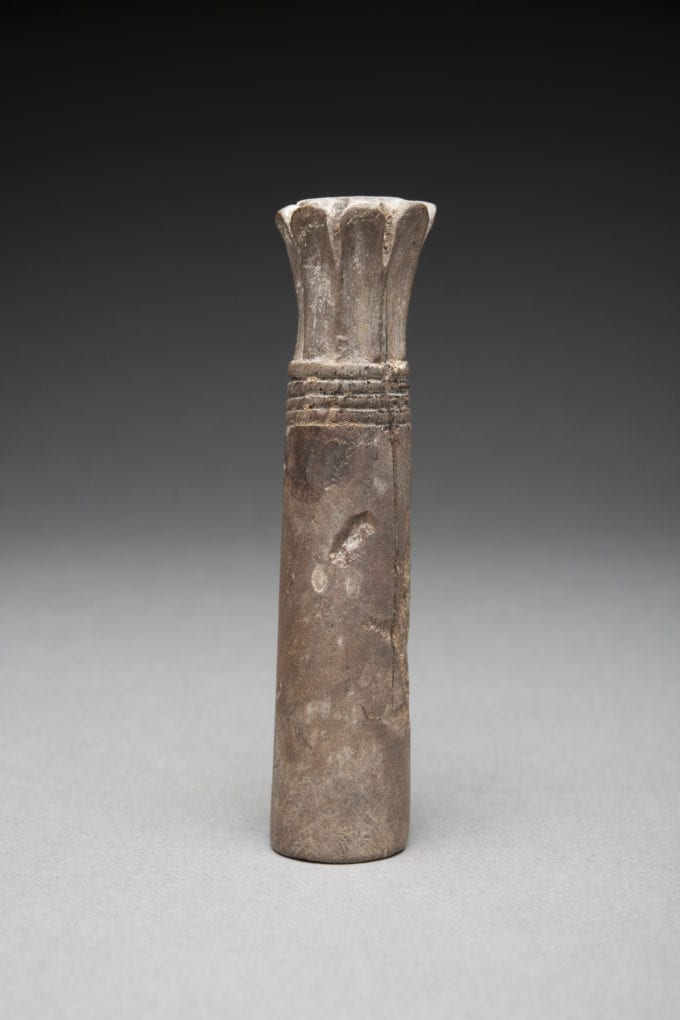 Not quite the most ergonomic design for application, but I bet this metal stick did scrape every last bit out of the kohl tube. 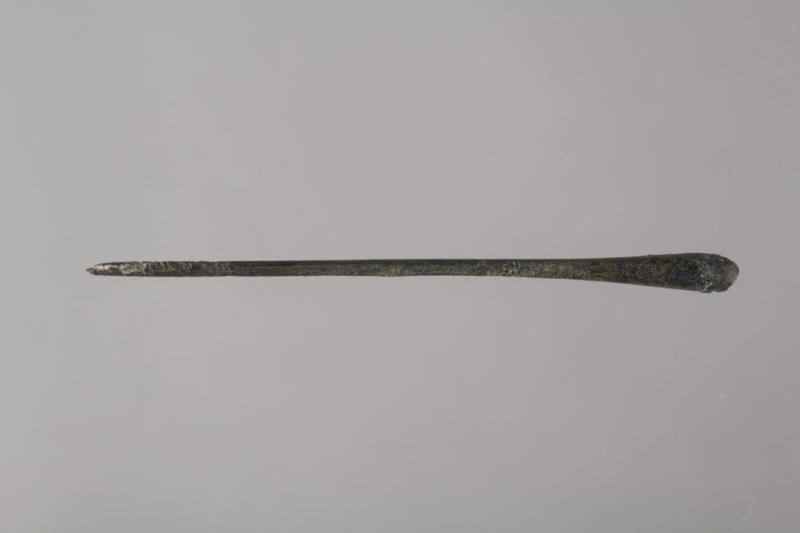 I wonder what this cosmetics box held!  The really great thing about the exhibition is that x-rays and other technical studies were performed by the students for each object.  So while we can't say for sure what this box contained, we know both the interior and exterior were painted, plus the students got to have some serious hands-on technical experience. 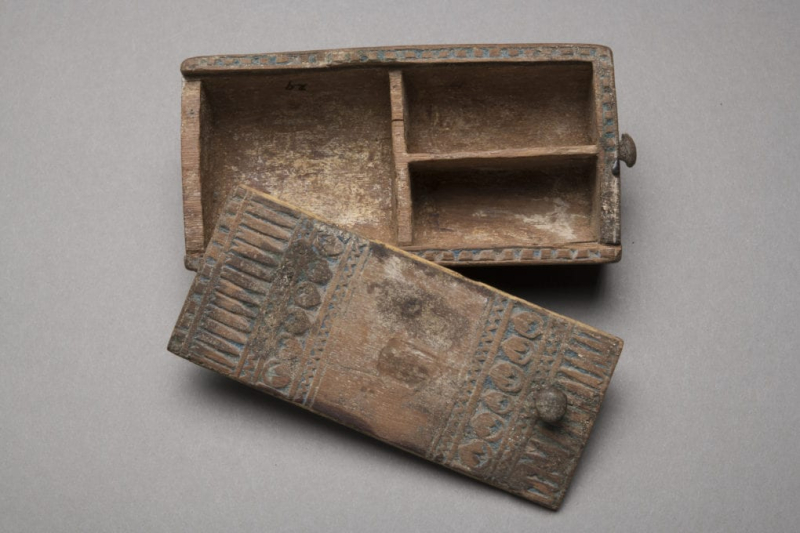 Based on "visible infrared luminescence imaging", the students were able to determine that the outer part of the box was painted with Egyptian blue, the first synthetic pigment.  All of the white areas in the photo below were painted with this vibrant blue, while it is speculated that the interior was painted with yellow.  I can only imagine how amazing this box must have looked in its original state. 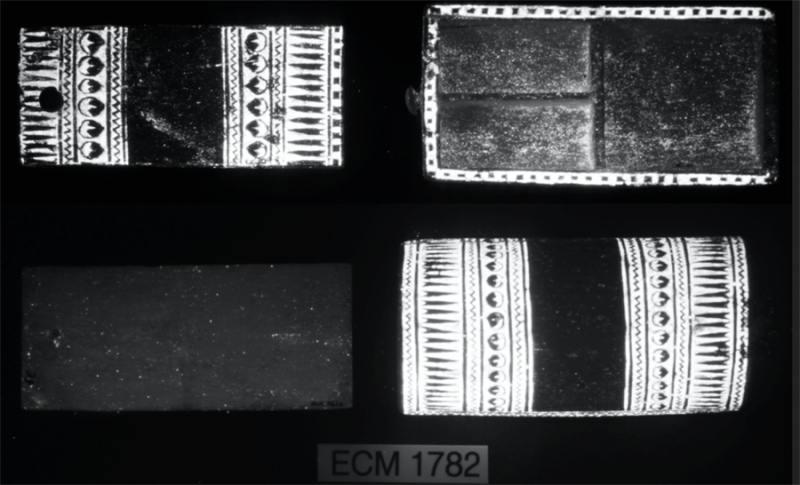 While these are wonderful objects, it's unclear if the Eton collection was ethically formed.  All I could find online was that Major William Joseph Myers "gathered" the items while stationed in Egypt and bequeathed them to Eton upon his untimely death in 1899.  Is "gathering" another word for stealing or looting, or otherwise exploiting Egyptians in some way?  Everything I've seen presents Myers as a collector who was interested in Egyptian art, so it's very likely he simply purchased the objects from local dealers - I doubt any sort of blatant tomb-raiding was taking place.  But who knows for sure?  In trying to find more information about the collection and whether these objects ended up in Myers' possession in an ethical manner*, I was also reminded of the vast Egyptian collection at Manchester, which makes me second guess purchasing the book detailing all the Egyptian palettes from the University of Manchester Museum's collection.  I want to learn more about ancient Egyptian cosmetics, or if hell freezes over be in a financial position to actually purchase an artifact, but I'm questioning how it can be done responsibly when the provenance of most of these objects is unclear or worse, definitely stolen or otherwise obtained at the expense of the original owner or native country.  This of course opens a huge can of worms about where any and all museum objects come from, which is a conversation for another time (although I have mentioned it briefly before.)

Thorny moral questions aside, these objects are fantastic and should it ever be safe to visit a museum again - hopefully sometime within the next 5 years, as the loan from Eton expires in 2025 - I may have to swing by Hopkins and see if there are any other cosmetic items on display.  What's your favorite item here?  Would you want to be buried with some makeup? I'm getting cremated so it's a non-issue for me, but I might entertain the notion of having a few pieces incinerated with my carcass. Ha!

*The only article I found related to the ethics of the Myers collection/museum indicated that 454 objects were returned to Egypt in 2009, but these were not objects collected by Myers himself; they were the gift of another donor in 2006.