On makeup history, racism and the Museum: some thoughts

Let me preface this post by saying that I haven't forgotten about the bigger issues regarding racism.  Skin color is literally a matter of life and death in this country and has been for hundreds of years.  But I want to address the lack of diversity, particularly Black representation, in current and vintage makeup, at the Museum.  I also want to look at how, or even if, it can be remedied.  That racism exists within the beauty industry both now and in the past is indisputable, and as both a feminist and makeup historian I considered myself well aware of these issues. But awareness isn't enough. Before I dive in I also want to note that it's Pride Month, and all of these ideas are applicable to the LGBTQIA+ community - more marginalized people that have not been adequately represented at the Museum.

Currently the Museum has only a handful of vintage items that came from Black-owned companies.  There are about 200 makeup ads in the collection, roughly 150 of which feature models, and of those only 3 depict Black models. And of all the artist collaborations that have been featured over the years, only 3 of them (!) were with Black artists.  In short, the Museum's collection is overwhelmingly white and serves as a direct reflection of white supremacy. A key reason is obviously that Black-owned beauty companies or products for Black customers are few and far between; historically there simply weren't as many beauty brands or products geared towards Black people and advertising primarily featured white models, both problems that still persist today due to institutional racism and implicit bias.  It was much more difficult for a Black person to obtain a business loan to start their company, especially in beauty, as they've been told time and again the lie that there is no market for cosmetics that would actually suit the vast range of Black skin tones.  However, while these are valid points, my own blind spots definitely play a role in the lack of representation in the Museum's collection and content.  Information on Black beauty brands and campaigns is without question difficult to find, but that doesn't mean it doesn't exist or that I couldn't do a more thorough job researching.  Here are the explanations for not actively working towards including more Black makeup products and histories.  These are just that - explanations, NOT excuses. I understand that I need to make more of an effort to diversify and that I am not totally helpless.  These explanations really just boil down to white fragility, albeit a different flavor in my case. I don't get defensive or angry when I acknowledge my privilege or when I've made a mistake (remember the Felicia the Flamingo debacle?), but boy am I fearful of doing the wrong thing. Not to mention I'm harboring a ton of white guilt.

It felt trite and tokenizing to be sharing the same Black beauty icons, the same few brands, the same few ads that we've seen before.  Especially during Black History or Pride months - I seriously hate when companies post a quote from MLK in February or turn their logo into a rainbow in June and call it a day. The histories and contributions of Black people and the LGBQTIA+ communities should be recognized year-round. Anyway, I thought it wasn't helpful to anyone to feature long-standing Black-owned brands that everyone knows about like Posner or Fashion Fair, or yet another history of Madam C. J. Walker.  For example, would it be interesting or eye-opening at all to keep seeing the same 3 Black models when discussing '90s makeup ads/looks? (Halle Berry for Revlon, Tyra Banks for Cover Girl and Naomi Campbell basically for everything else.)  Nope. So I thought, well, I'll dig deeper, I know there's more information out there on Black makeup history that hasn't been fully covered or unearthed yet.  And there is!  I found some pieces of Black makeup history that I haven't seen a million times and am finding more now that I'm looking more closely. 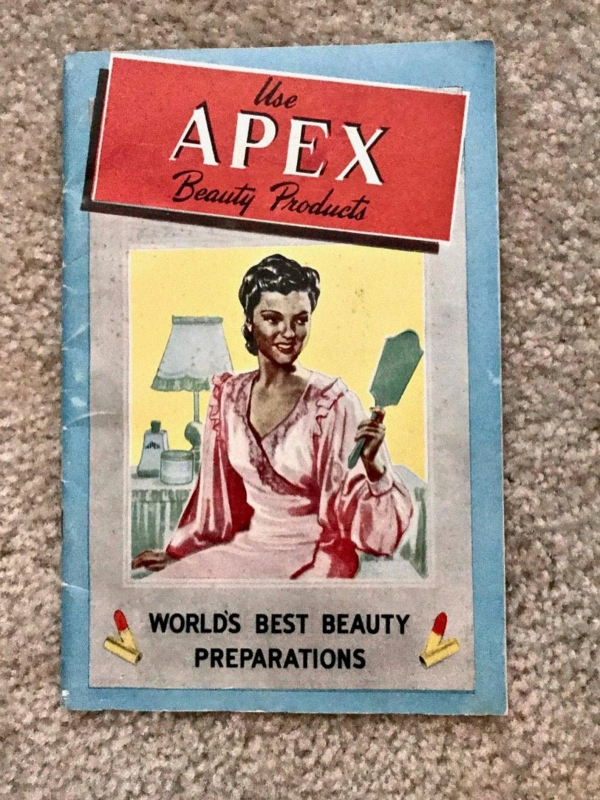 But I still feel these are not my stories to tell or analyze.  As noted previously I've never had to struggle to find a foundation match or flattering colors.  And as a white person it makes me very uncomfortable to tell the story of a vintage Black-owned brand or ad campaign, that white-splaining would ultimately do more harm than good.  Why is a white person sharing their unsolicited opinion on Black makeup brands or trying to cover Black history?  Don't we need more Black voices?  Then I thought that I could ask Black historians to write guest posts on Black makeup history, or co-curate a whole exhibition.  And for more current topics, I could invite Black people to share their stories that I could then compile into an online, downloadable publication and have print copies on demand, with all proceeds going to charity. But could they be considered contributions to makeup history or yet more work for Black people?  Some white lady asking for the experiences of Black people sounds awfully demanding and possibly patronizing.

Along these lines, I am fearful of appropriating Black culture.  Cultural appropriation is a topic I'm sensitive to, and I worry that it's offensive for a white person to be including brands intended mostly for Black customers.  Fenty and Pat McGrath are acceptable because while they are Black-founded and owned, they seem to cater to everyone.  Smaller indie brands like Uoma and Juvia's Place, on the other hand, appear to be primarily intended to meet the needs of Black customers. I loved the packaging for Uoma's Carnival collection and wanted to add it to the Museum. I wanted to interview Uoma's founder about the inspiration behind the collection and the packaging design. I understand everyone's money is green, but I was afraid that adding these products to the Museum's collection would somehow come off as appropriative. 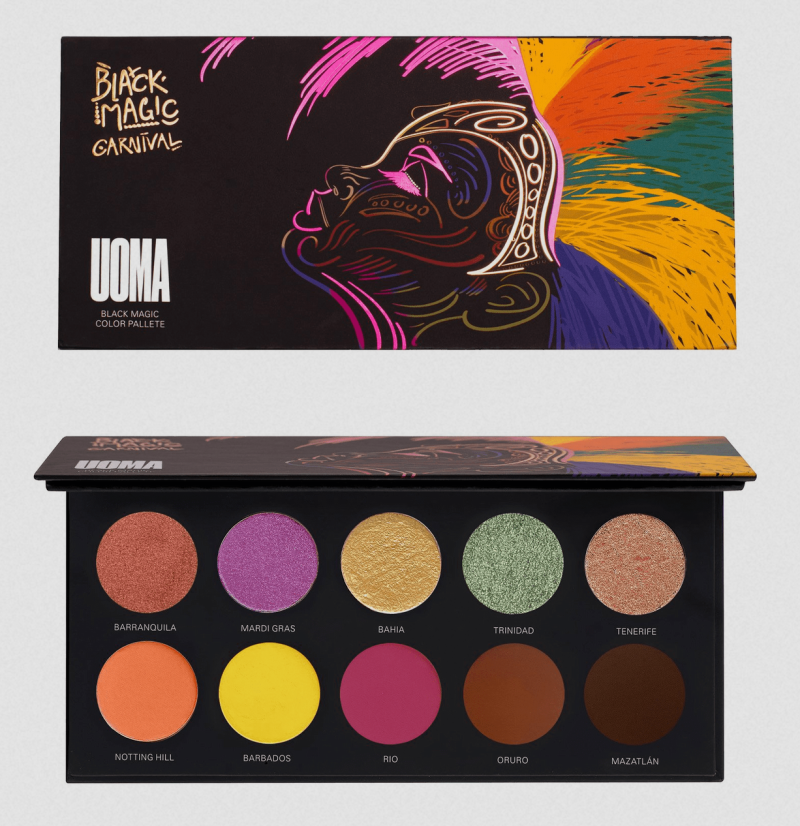 To be honest, I feel odd sharing that I like any aspect of Black culture. White people have been appropriating it and exploiting it for years, can't Black people just have something we wouldn't take from them?  And so I felt like buying the Uoma collection would be wrong, that it wasn't intended for white people to have.  The same goes for some amazing powder boxes made by tribes in Africa such as the Kuba people of the Congo, especially as the cosmetics they hold were sometimes used in rituals.  On the one hand it's necessary to share and promote Black-owned brands and various African cultures; on the other I question whether it's appropriate for white people to do so.

So this leads to to a discussion of future Museum content and collection planning. Something as innocuous as round-ups of certain themes may actually be offensive, considering that many of them don't feature anything but white-owned brands, ads with white models, etc. I think these sorts of round-ups are important for makeup history and I want to keep incorporating them.  Ditto for objects that don't come from Black-owned brands and artist collaborations. I purchase items for the collection based on their artistic, design or historical value; just because an object doesn't come from a Black-owned company doesn't necessarily negate its importance.  But the lack of representation is really troubling, and I just don't know what to do.  Some examples:  I was going to post a picture on IG of all orchid-themed products, but quickly realized that not one of them came from a Black-owned brand, and every single vintage ad featured white models exclusively.  I was going to post the Too-Faced Quickie Chronicles on IG too - matching the pin-up artists to the Too-Faced palettes was a fun series to write...until I remembered that Too-Faced is white-owned, and all the vintage pin-up girls featured and the artists who created them are white.  A post I had planned for the blog was an artist collaboration that I didn't have a chance to cover last year when it was released, Connor Tingley for NARS.  Guess what, both Mr. Nars and the artist he hand-picked for the collab are white dudes. Do I not share any of these, then?  I don't think all the whiteness can be balanced by the Black makeup history I'm able to access.  So maybe I wouldn't write about them, but I still think they're important and need to be shared. Especially artist collabs, as they were one of the main reasons for the Museum's existence.

I don't know what the answers are.  I firmly believe makeup and its history is for everyone, but that sentiment is not being reflected in the Museum currently, and I don't know how to change that given that there are still so many barriers to racial and gender equality.  I can do absolutely do a better job researching and have already come up with some ideas for future posts focused on Black makeup history, and I have many more books on my list about museums and diversity in general to educate myself further.  Whether this will be enough, or even appropriate, remains to be seen.  Thoughts in the meantime?  (I think Disqus may be acting up so please feel free to email me if you can't leave a comment, or DM me on Twitter or IG.)