I'm still a bit wiped out from the spring exhibition and it's been ages since I've shared some inquiries that made their way in the ol' Makeup Museum Mailbag, so here's a quick review of some questions that have been sent my way.

First up is this lovely compact with a six-pointed star in blue rhinestones - perhaps a Star of David? - and matching lipstick, submitted from a reader in Australia.  Her grandmother's brother had brought it back to her grandmother during the second World War.  Without any logo or brand markings I can't pinpoint the company that made it, and after looking online and through all my collector's guides I can say I've never seen a vintage compact with this design. Obviously it was made in France, but I'm not quite as familiar with objects across the pond, as it were.  It's a beautiful set and I wonder whether it has any wartime or Holocaust significance. 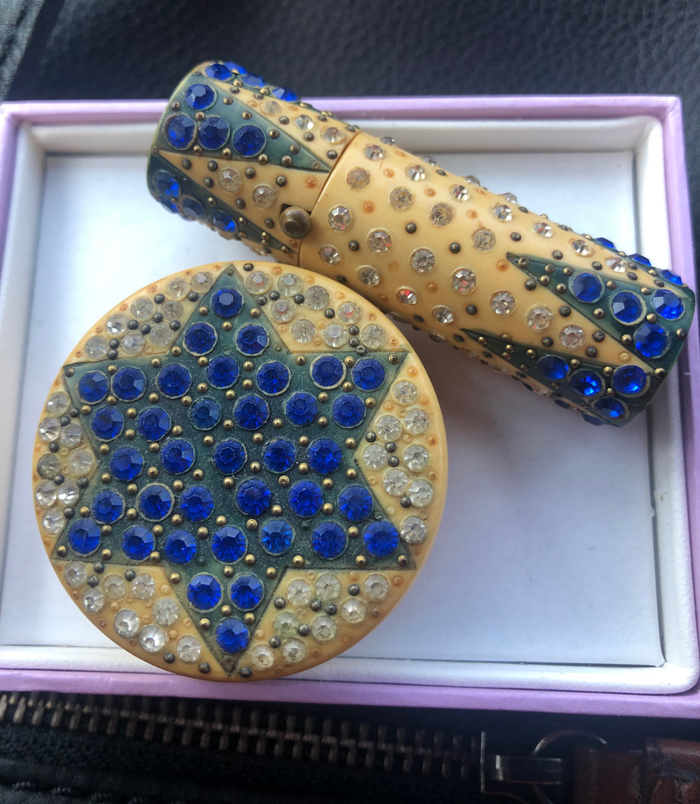 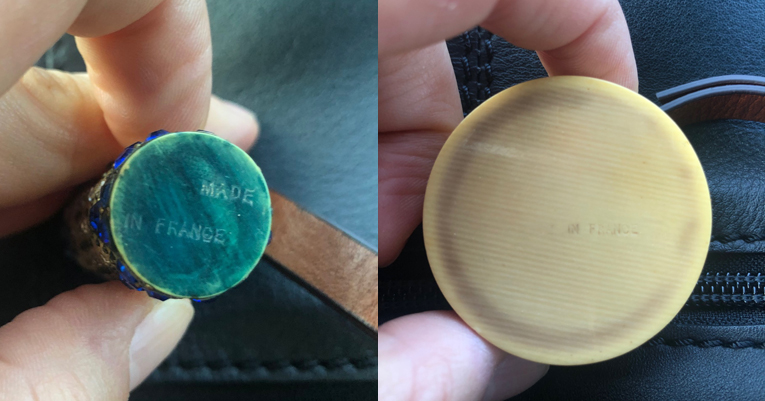 The second inquiry I have to share today was another head-scratcher.  Someone had messaged me on Facebook (which I set up earlier this year but rarely use) asking about this little lady.  It's a Revlon Couturine lipstick, but her identity remains a mystery. 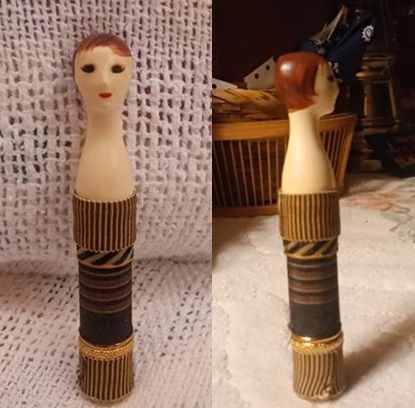 As I've noted previously, allegedly the Couturines were supposed to be modeled after actresses and other purveyors of style.  But this one doesn't seem to match any of the ones that have been identified.  The only other actress whose name I've seen mentioned is Shirley MacLaine but it's not her either, according to this photo. 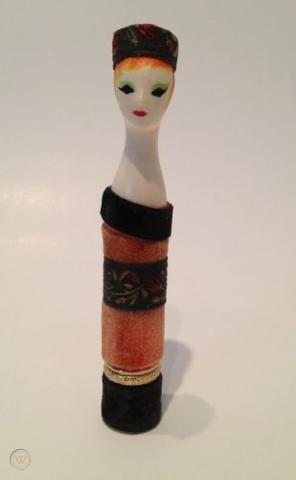 Finally, I received an inquiry from someone asking for proof that suffragettes wore lipstick as a symbol of emancipation.  I swiftly directed this person Lucy Jane Santos's excellent article outlining how there really is no solid evidence that the ladies fighting for equality in the early 1900s regularly wore lipstick to rallies, or at least, to the big one in 1912. As she outlines in her article, it appears to be a persistent myth that most likely began circulating in the '90s both in Jessica Pallingston's book and Kate de Castelbajac's The Face of the Century: 100 Years of Makeup and Style (1995).  Just for kicks and giggles I took a peek at newspaper archives (I'm finding they're just as fun and informative as magazines) and dug up a couple of interviews with British suffrage leader Emmeline Pankhurst and a profile of her daughter Sylvia.  Their views on makeup are positively fascinating!  As it turns out, Emmeline had no moral issue with cosmetics, she just didn't find a made-up face aesthetically pleasing:  "Don’t think I am actually censoring the young girls nowadays…the very brief skirts and the overdone makeup are by no means an indication of loose morals.  They are, in often rather a pitiful way, an indication of groping toward greater freedom and they are still more a groping towards beauty…the impulse to make one's self look as well as possible is a perfectly sound impulse. It has its root in self-respect.  It is quite wrong to think that the use of short skirts and rouge are based on any violent desire to attract the opposite sex. The use of these aids [is] based on the legitimate desire to look one’s best. A woman dresses more for other women than for men.  But the too-red lips and the extremely short skirt – I must confess that I dislike them.  I dislike them because so few girls look well thus arrayed, and because older women, when thus arrayed, usually look rather ridiculous.  But let me point out one fine fact behind all this makeup.  It is not added with any idea of deception.  The woman today who powders and paints does it frankly, often in public without one iota of hypocrisy. And this, I think, is a splendid gain.” (emphasis mine)

Her daughter, Sylvia, on the other hand, did not approve of makeup at all.  "I still don't approve of lipstick and makeup.  It's horribly ugly, destroys the value of the face.  I've never used it, never shall."  Her obituary also states that she thought makeup and lipstick were "tomfooleries".

I did also see this 1910 ad from Selfridge's.  This is what I believe to be the only reference to suffragettes wearing lipstick. I'm wondering if this is part of how the myth was generated, since even with this ad there doesn't seem to be any concrete proof that suffragettes wore lipstick.  Selfridge's advertised and sold it; whether it was widely worn by suffragettes is still up for debate in my very humble opinion. 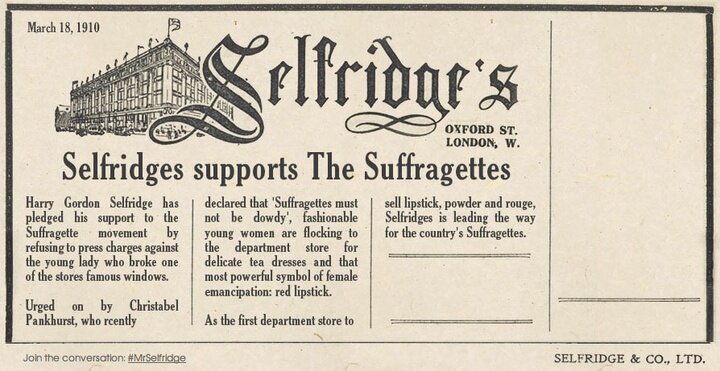 If you have any additional information about the things I've shared today, please let me know! Which one do you find most interesting?