I hope to cover Sulwhasoo's beautiful ShineClassic compact that they released for the holiday season a few months ago, but in the meantime I'm focusing on this lovely cushion compact they came up with for spring.  Sulwhasoo collaborated with Antoinette Poisson, a design studio specializing in domino wallpaper.  I know some folks think it's just marketing hogwash, but Sulwhasoo seems genuinely invested in preserving historic art forms to ensure they aren't forgotten rather than making a quick buck off of a watered-down idea intended solely for mass commodification. The company has consistently highlighted traditional Korean artistic practices for over 15 years by releasing collections based on a particular technique or genre and collaborating with top artisans. Continuing in this vein, for spring 2020 Sulwhasoo is partnering with an outside company that is equally committed to revitalizing centuries-old art production: "Sulwhasoo chose Antoinette Poisson as its collaborative partner for the year of 2020 because of the art studio’s commitment to and philosophy toward carrying on and delivering cultural heritage to present generations, with which Sulwhasoo fully identifies."

The compact features intricate embroidery depicting a blossoming flower branch and a butterfly to represent "spring, hope and joy".  Gold and silver threads are interwoven with the pink and red of the flowers and butterfly for an elegant, glamorous touch. 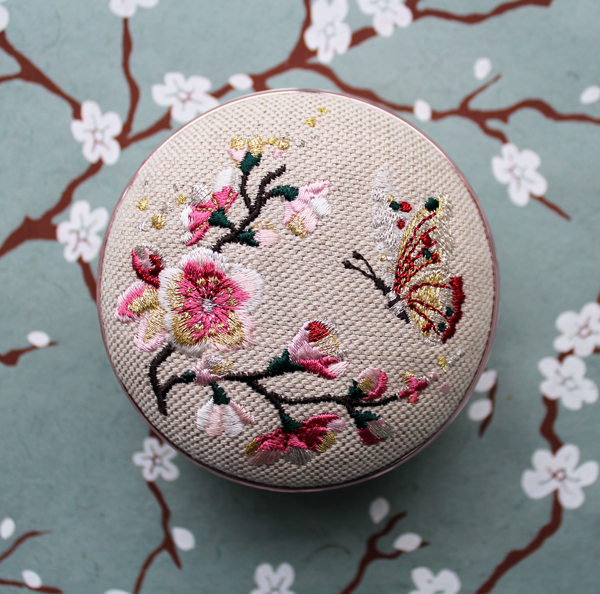 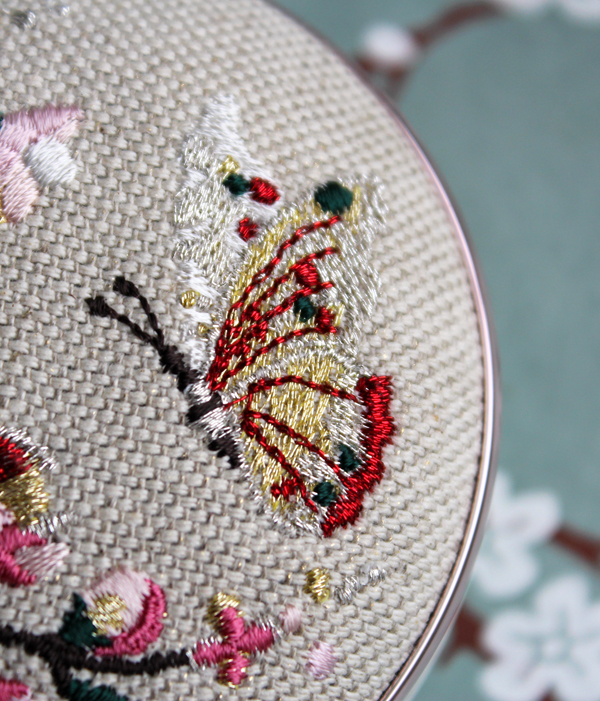 I'm no embroidery expert, but it looks well-made to my eye.  I also love the embroidery because it's rare to see embroidered compacts that aren't generic, mass-produced designs.  With the exception of Marcel Wanders's 2016 compact for Cosme Decorte, I can't think of any contemporary makeup brand that has done one of these.  And while petit-point compacts were quite popular in the early 20th century, they've largely faded now. 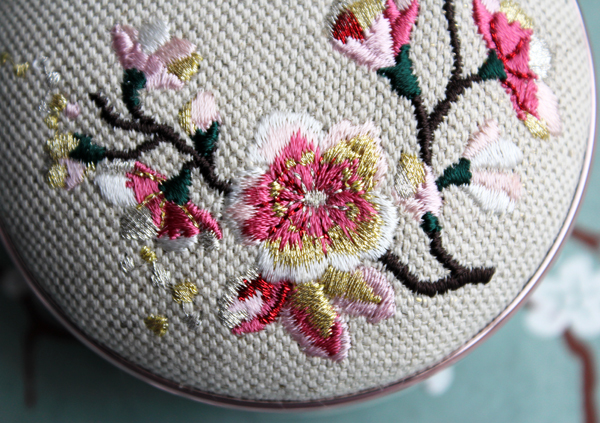 I'll get to Antoinette Poisson's work in a sec, but can we take a minute to appreciate the Sulwhasoo box?  The gold and silver foil details mimic the embroidered threads on the compact, while the dotted pattern pays homage to the overall aesthetic of 18th-century France. 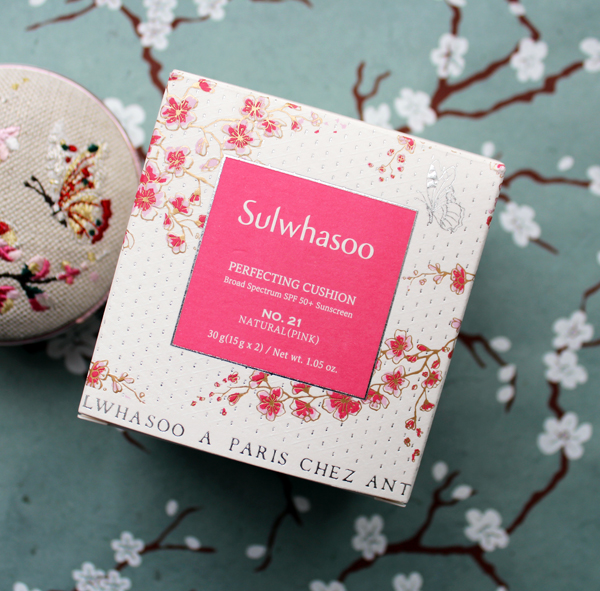 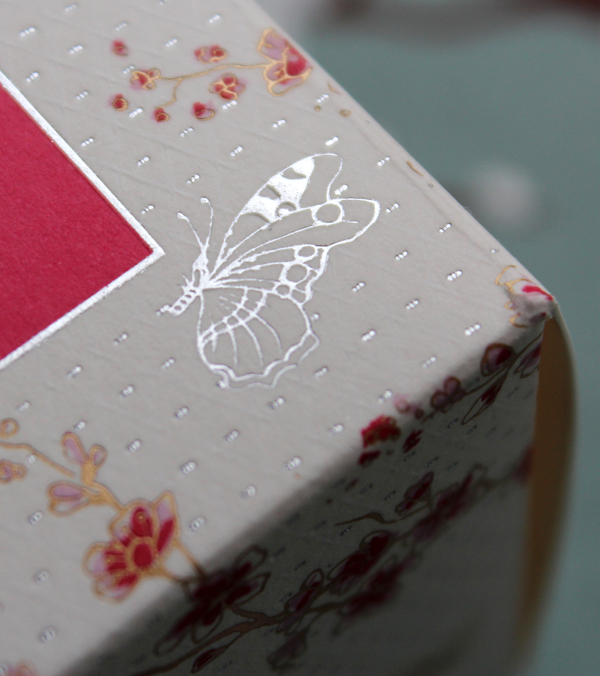 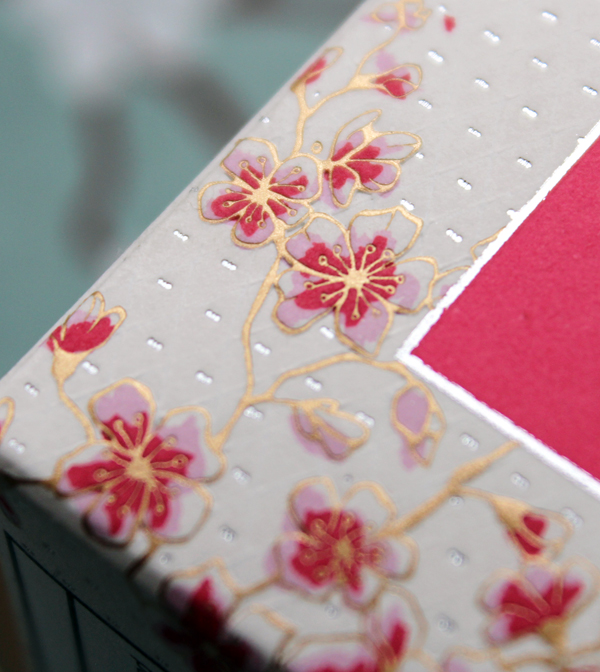 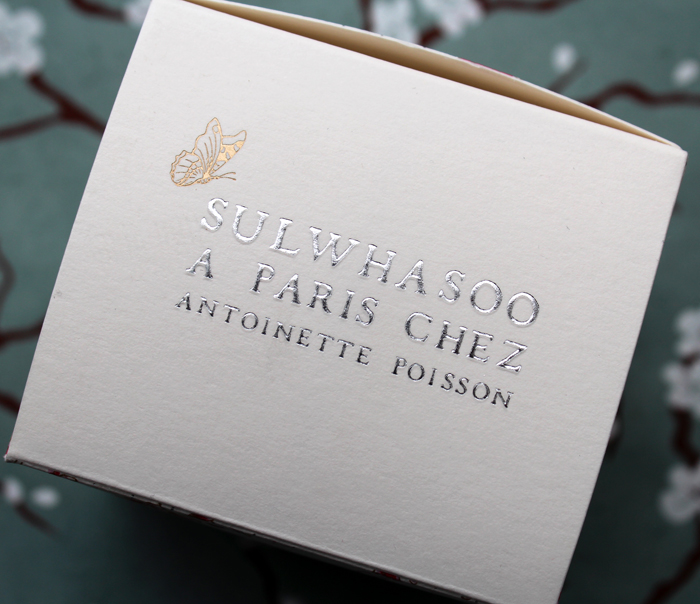 There was another version available with slightly different colored flowers, which unfortunately was not available in the U.S. - for some reason we only received the Perfecting Cushion and not the Brightening version.  I'm debating whether to use some of the Museum's limited budget on purchasing it via eBay.  Given that it's the same design I'm hesitant, but it's so pretty and as a collector I feel the need to have both. 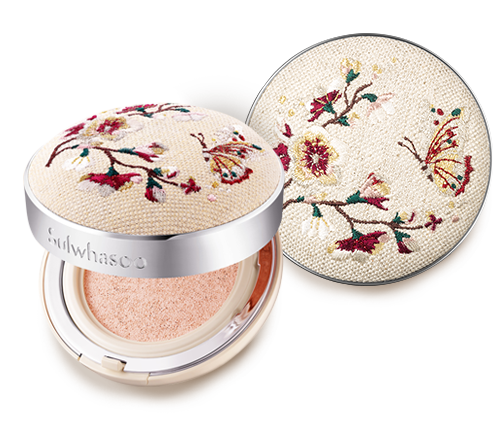 So who is Antoinette Poisson?  The Paris design studio was founded in 2012 by three paper conservators: Julie Stordiau, Vincent Farelly, and Jean-Baptiste Martin.  The brand takes its name from Madame de Pompadour, famed mistress of Louis XV who the team describes as an "art patron and wallpaper enthusiast."  I'll let Vogue take it from here, as I'm both lazy and also prepping the spring exhibition - I'm loathe to regurgitate this information in lesser wording.  "Antoinette Poisson’s niche is the making of domino papers (papier dominoté), using artisanal techniques that date to the Age of Enlightenment, when these patterned sheets with their distinctive patterns—small geometrics or sinuous floral garlands—were all the rage. These motifs are printed on a single piece of paper using woodblocks and then hand-colored using stencils. Their compact sheet size made dominoes ideal for use as trunk liners or endpapers, but their allure was too great to keep under covers, as it were, and they were adapted for use as (pre-roll) wallpapers. At the time, decorating with domino paper signaled not only the owner’s taste, but also their wealth. Their production stopped with the advent of the 19th-century Industrial Revolution...almost all of [Antoinette Poisson's] products—trays, boxes, fabrics, and wallpapers, et cetera—are fabricated in their Parisian atelier using time-intensive 18th-century techniques. Even the paper sheets they use are handcrafted in a mill that uses methods dating to that earlier, gilded age. The impetus to launch Antoinette Poisson came when the trio re-created a domino paper for a restoration project. The results were so marvelous, that the team decided they 'wanted to propose [this style] for current decoration.'" House and Garden expands on the pain-staking technique of producing the patterns.   "Although these papers are almost indistinguishable from the originals, computer technology ensures the engraving blocks, their designs first drawn by hand, are absolutely precise. Jean-Baptiste stresses that 'all the blocks are perfect, it is the printer who adds their own imperfections in the printing and hand-painting process'." I couldn't really visualize how it all worked, so here's a brief video showing the stenciling and painting.

By 2014 the studio had produced 14 patterns, 8 of which were either exact reproductions of original prints or looser, modernized "reinterpretations" of them.  These, for example, are reproductions of papers made by mid-18th century printmakers. 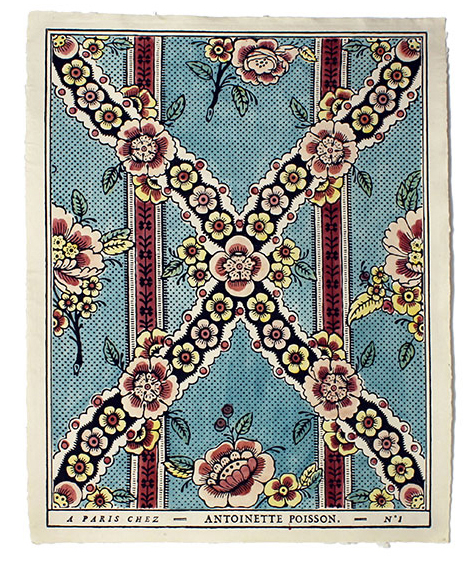 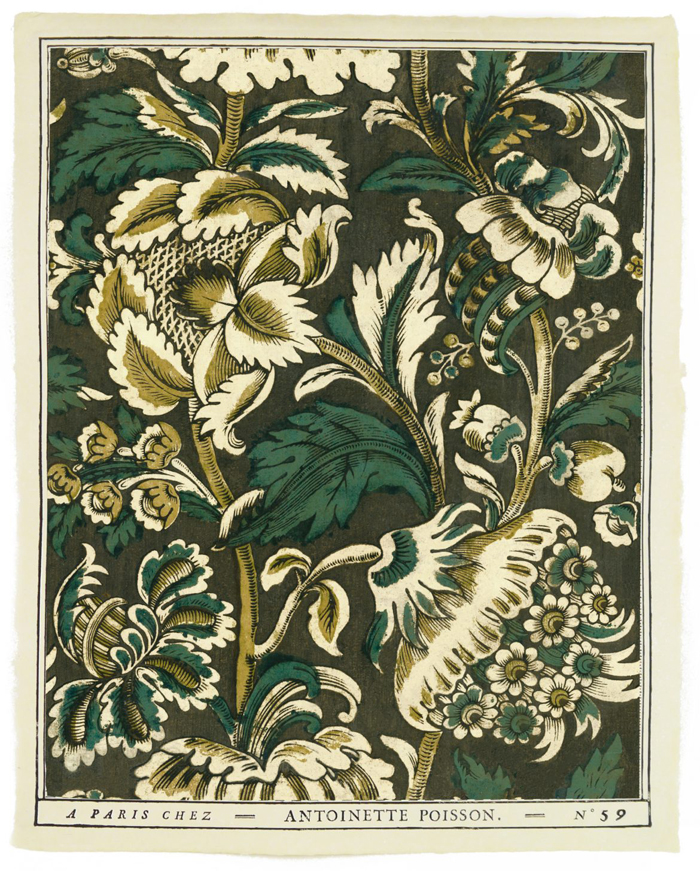 This one is a reinterpretation of a pattern found in the "Chambre aux Amours” within the Museum of Wallpaper's collection (yes, that's a real museum.) 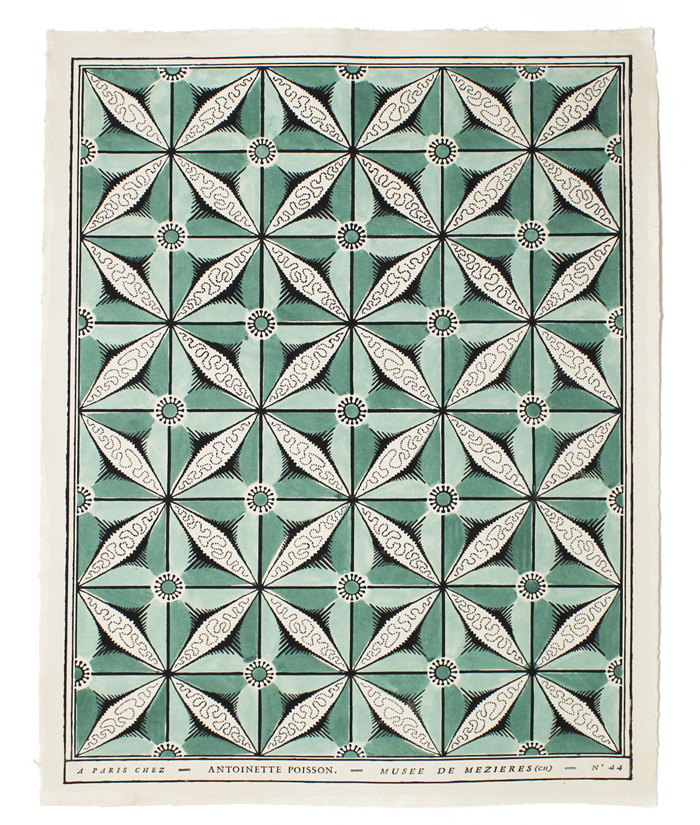 The rest of Antoinette Poisson's patterns are their own creations.

If you look closely at this one, you can see that the dot and diamond pattern in the middle is the same as the one on the Sulwhasoo box. 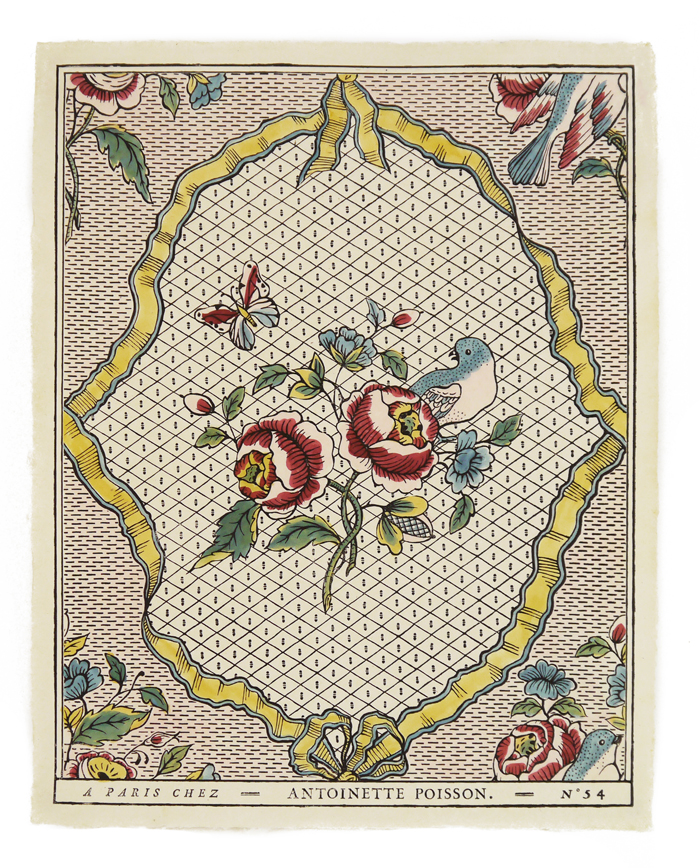 This one appeared on Ladurée's gift packaging last year. 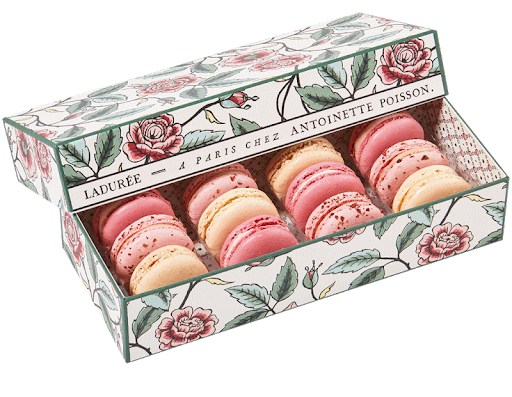 Speaking of which, the studio is no stranger to collaborations.  Besides their usual task of producing bespoke decor for stores and individual clients, Antoinette Poisson partnered with Diptyque to create a pattern for their 2017 Rosa Mundi candle collection. 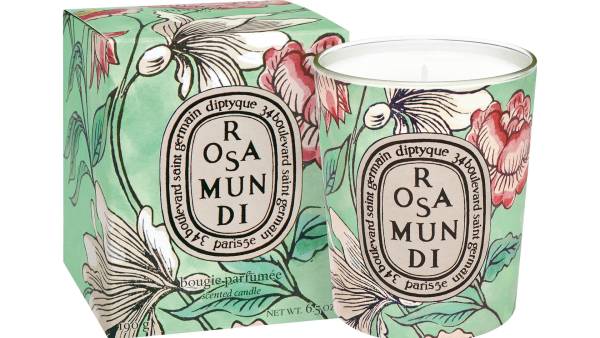 More recently the studio collaborated with Gucci for their resort 2019 collection. 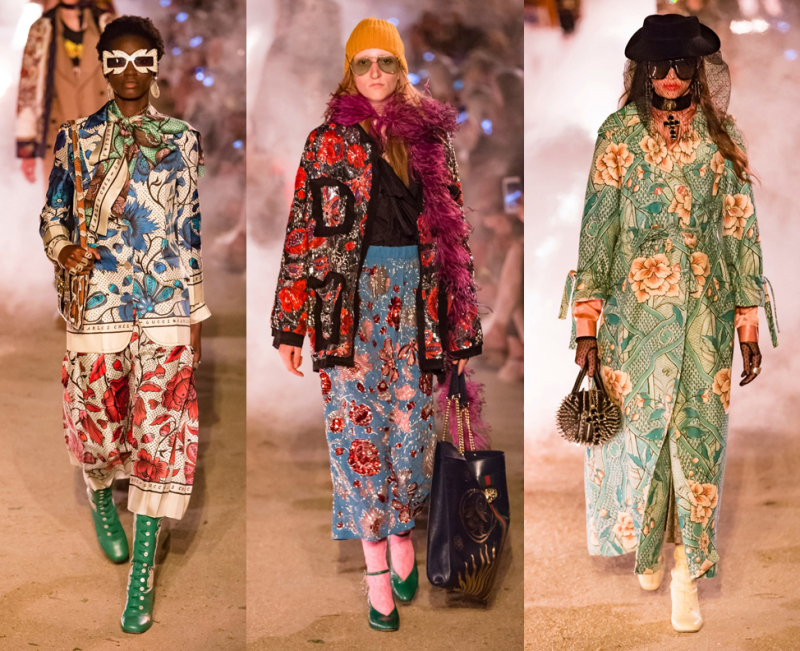 How does Antoinette Poisson's work relate to Sulwhasoo and their goal of preserving Korean heritage? The pattern they designed is reminiscent of Hwajodo, or paintings of flowers and birds. As with my last foray into traditional Korean art with Sulwhasoo, I'm by no means an expert but I can provide some basic information about Hwajodo.  Hwajodo is a genre within Korean folk painting ("Minhwa") and was produced either by painting on paper or embroidered onto screens.  Minhwa was especially popular in the 19th century, which I guess is why all of the examples I'm finding online are from that time period*.  Typically Hwajodo depict birds in pairs to represent domestic harmony and love between husband and wife, which is why they were often given as gifts to newlyweds. 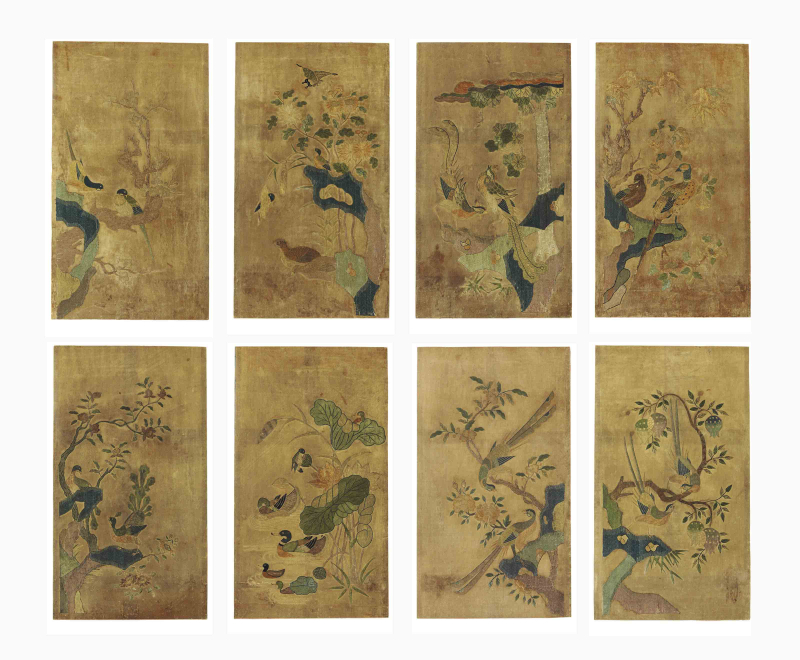 According to the Folk Painting volume within the Handbook of Korean Art series, the various birds represented particular virtues.  For example, peacocks symbolize longevity, while pheasants signal beauty.  There were also rules governing the composition of Hwajodo; certain birds had to appear with certain plants, i.e. ducks and egrets were always shown with water plants. 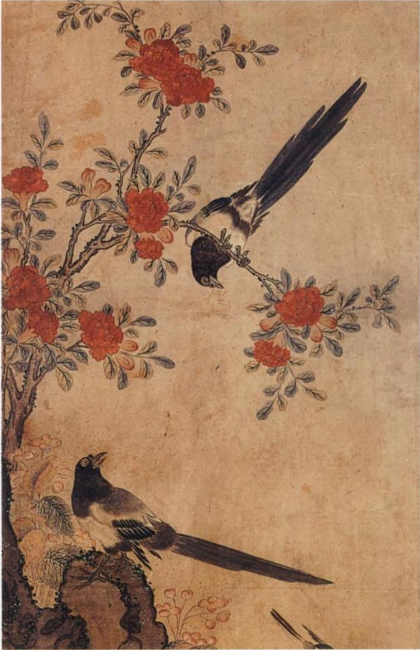 However, given the lack of birds and the inclusion of butterflies, I believe the pattern created for Sulwhasoo would fall under a sub-category of Hwajodo known as Hwajeopdo, or paintings of flowers and butterflies.  (The plum blossoms are appropriate, as they are a symbol of early spring in Korea.) 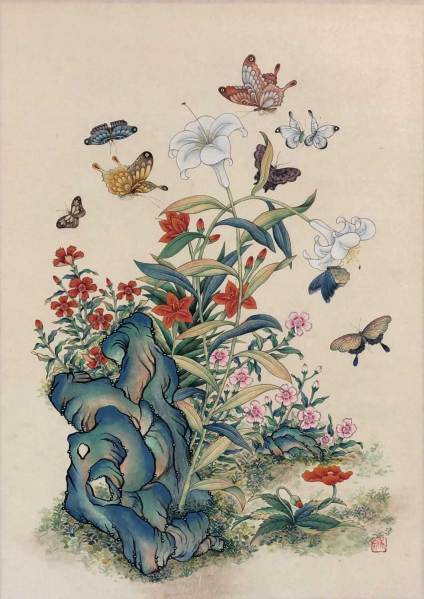 A company specializing in historic French wallpapering doesn't seem like it would be a match, but Sulswhasoo cites the studio's "understanding about and interest in Oriental art" as one of the reasons for the collab. The primary impetus for the partnership, however, was that Sulwhasoo found a kindred spirit in Antoinette Poisson in terms of wanting to protect and celebrate a particular type of art.  The production of domino papers was a "largely forgotten process" much like the ipsa featured in Sulwhasoo's holiday 2018 collection.  The founders of Antoinette Poisson felt it was up to them to rescue this beautiful 18th century craft and breathe new life into it.  Without them and the dedicated artisans Sulwhasoo commissions, these art forms would be erased from history.  As co-founder Vincent Farelly notes, "Even though we come from different cultures, we share the same mindset.  We both love to find inspiration from our heritage."

While the partnership between Sulwhasoo and Antoinette Poisson makes sense, I still wonder how it came about.  Antoinette Poisson isn't exactly unknown given their previous high-profile collaborations, but I'm curious to know at Sulwhasoo who came up with the idea to work with them.  I also find it interesting that Les Merveilleuses Ladurée haven't seized the opportunity for an Antoinette Poisson makeup collection of their own given their 18th-century aesthetic and especially since the studio collaborated with the main Ladurée company.  In any case, the Sulwhasoo collaboration yielded a well-designed result that combines traditional Korean and French decorative art and gives it a modern spin in the process, while also bringing these lesser-known and nearly forgotten artistic practices to a wider audience.  The metallic details of the box and embroidery elevate the compact to a more luxurious objet d'art, while the pattern itself is beautiful and appropriate for spring.

What do you think?  Have you ever heard of domino paper or Hwajodo before?  I have to say I was dazzled by the versatility of Antoinette Poisson - I want one of their creations as wallpaper, boxes and pillows in addition to makeup!

*This website provides more background on minhwa, if you're curious:  "Minhwa, an artistic style that reflects the lives and spirits of Korean people, became widely popular during the 19th and 20th centuries. It was in high demand from the new merchant class and civilians, as the centralised authoritarian rule of the Joseon Dynasty slowly collapsed starting in the late 17th century and through the 19th century.  Up until the middle of the Joseon Dynasty, minhwa paintings were painted by court artists for use in palaces. However, with the societal changes in the late Joseon Dynasty, they started to be painted by anonymous artists of the middle and lower classes, who produced and disseminated minhwa. The common people’s wishes for a healthy and prosperous life and desire to beautify their own living environments gave birth to the development of minhwa that reflects Koreans’ daily life, customs, and aesthetics."