I have so many other books I'd like to review but so little time, and this tome had been sadly collecting dust on my nightstand for ages, so here's a quick review for a quick read.*  Lipstick: A Celebration of the World's Favorite Cosmetic by Jessica Pallingston was released in 1998, just a few months prior to Meg Cohen's Read My Lips: A Cultural History of Lipstick which I reviewed in 2015 and vowed to compare it to Pallingston's book shortly thereafter (in other words, I'm a mere 5 years overdue for that task.  Sigh.) Anyway, I found the two books to be more or less the same in terms of content.  This isn't necessarily a bad thing, but I think if you were looking for a basic history of lipstick you could choose one or the other and not feel like you're missing out. 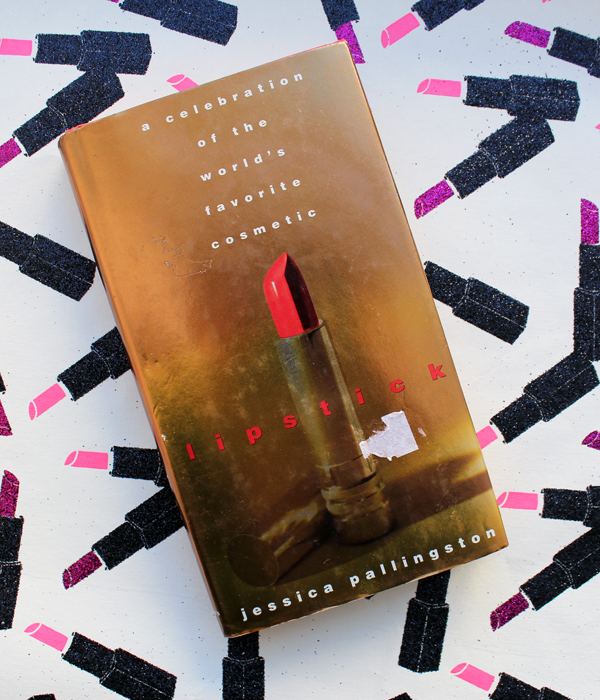 The introduction left a bit to be desired, as it placed emphasis on lipstick as a tool to either "empower" women or lure men; there was no mention of playing with color as a means of self-expression.  I also think, as I did with Cohen's intro, that the fetishization of lipstick and the overblown description of its alleged power were a bit much.  Lipstick can be life-changing, yes, but proclamations like "Lipstick is a primal need" made me roll my eyes.

Like Cohen's book, the first chapter is a brief overview of the cultural significance of lipstick throughout history, starting with ancient times and ending with the 1990s.  Not a bad summary, but since I've been doing this a long time there was little earth-shattering news.  This isn't the author's fault, however, as the book was released over 20 years ago so this sort of information wasn't as ubiquitous as it is now. Containing the standard tidbits about ancient Greek prostitutes and the patriotic duty lipstick served during World War II,  the chapter is a tidy summation of how lipstick was worn through the ages.  But the section on the '90s penchant for brown lipstick nearly made my eyes pop out of my head, as I had never come across theories about why brown lipstick (and brown in general) was so popular.  This will definitely inform my research for my '90s beauty history book! 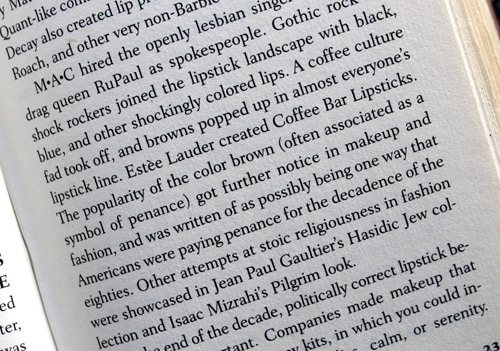 Chapter 2 presents no fewer than 14 theories outlining why lipstick wields more impact than other cosmetics.  I found them to be slightly lacking, as I believe the "lipstick as phallic object" or "painted lips mimicking sexual arousal" theories rather tired at this point, not to mention sexist.  Ditto for the idea that children feel more protected if their mother leaves a lipstick print as they kiss them goodbye before school, lipstick application as oral fixation, or as a rite of passage for teenage girls.  There was some truth to the theory about lipstick as a sort of armor or camouflage, but seeing no mention of how lipstick fits into the larger notion of makeup as a means of self-expression was disappointing.  And I would have liked to see more about makeup's transformational power, but the only theory about lipstick as metamorphosis came in the form of fairy tales, i.e. one's wildest dreams come true through makeup and one will magically become "pretty" if they wear it:  "When I put on lipstick I am as pretty as Cinderella" was one of the quotes included.  (Why is the author quoting a literal 5 year-old?)

Chapter 3, appropriately titled Lipstick Freud, delves into pop psychology as Pallingston takes us through the various lipstick shapes that are the result of one's unique wear pattern (which obviously also depends on the shape of one's lips), along with what various application methods say about the user and something called lip reading.  Much like astrology and palm reading, they're fun but not necessarily accurate or based on hard scientific data. 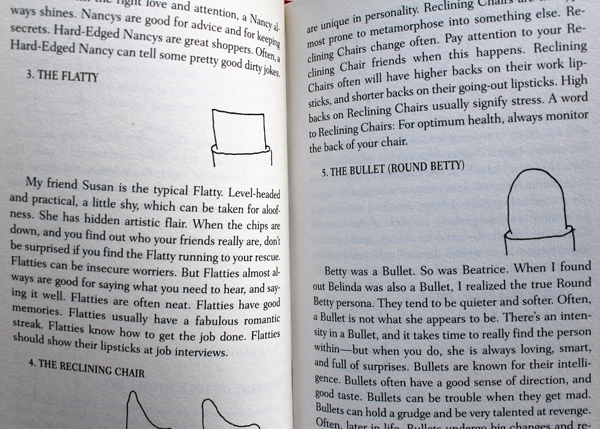 Chapter 4 was my favorite, as it provided a list of bite-sized anecdotes about lipstick as well as a lipstick-by-the-numbers section.  I miss Allure's by-the-numbers feature tremendously and am dying to include something similar in exhibitions. 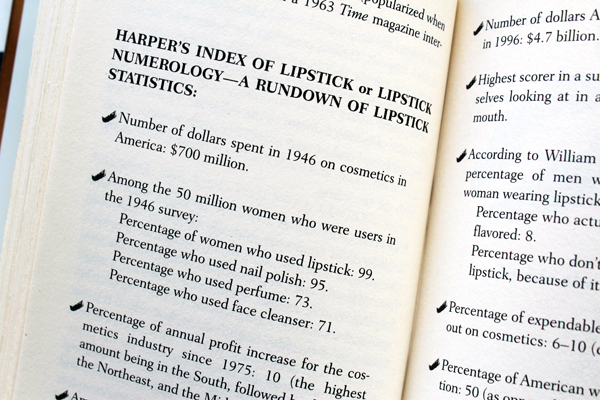 Chapter 5 gets into the nitty gritty of lipstick - the complete process of how it's produced and a lengthy list of ingredients, which is good information to have on hand.  This chapter also includes sections on colors and names, both of which I believe warrant their own books.  (There is actually an entire book on red lipstick, which I hope to review sometime this year.)  You can definitely see how times have changed, since black and grey aren't mentioned at all and blue and green are discussed as having solely negative connotations of illness or death.  These can be accurate, mind you, but as someone who has now fully embraced non-traditional lipstick colors (especially grey - I own no fewer than 9 shades), I found myself chuckling at the idea that blue or green lip colors used to be mostly associated with bad health.  There are incredibly vibrant blue and green shades on the market these days - what could possibly be more a reminder of rebirth and growth than something like Menagerie's Juniper lipstick, for example, or capture the vitality of a hot summer day like MAC's Blue Bang?  Anyway, while it was a nice read, it may have been good to include a section on different lipstick finishes and textures.  But once again, this is really just part and parcel of this book being released in 1998, when liquid and glitter lipsticks weren't absolutely everywhere. 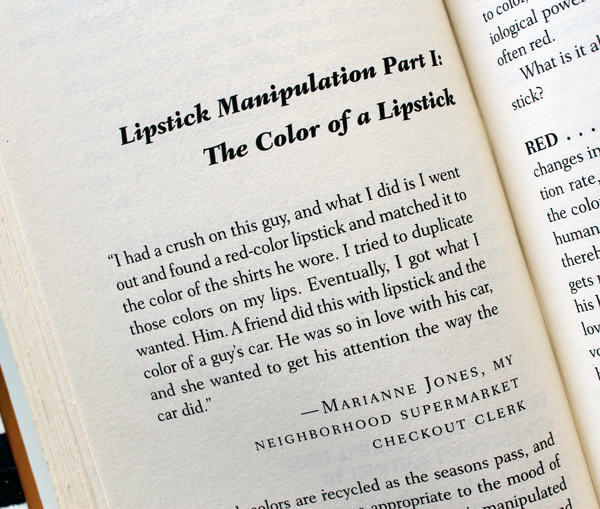 The naming section was notable for its inclusion of shade names from Renaissance England: apparently Beggar's Grey, Rat and Horseflesh were all listed as lipstick colors. 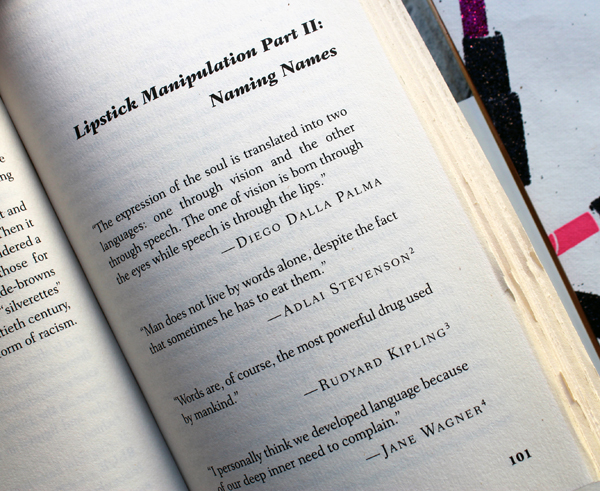 Chapter 6 gives some tips on how to navigate choosing and buying a lipstick in-store.  With the advent of online shopping and swatches, this is largely obsolete and the advice itself was pretty basic. One unusual tip was to try swatching a lipstick on the inner wrist.  I'm personally a fan of trying colors on fingertips since they are allegedly closer to your natural lip color, but if you want to find out how the color will look next to your overall facial skintone, the wrist is the place to swatch.  Chapter 7 was more of the same, a list of lipstick application and color-coordination techniques that aren't anything you couldn't find online or in any beauty magazine. 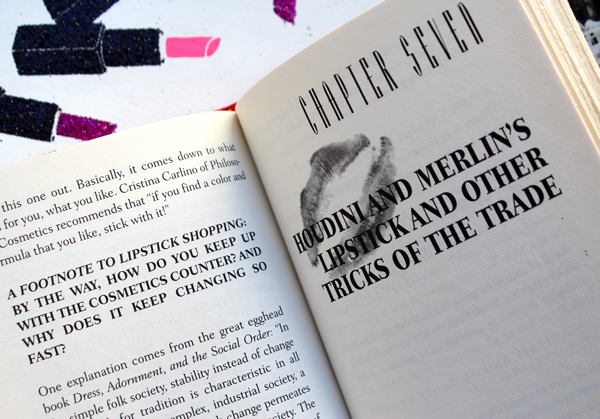 Chapter 8 is probably the only chapter that is not in need of a major update, as it provides recipes for making your own lipstick that are still totally doable today.  Even as technology and customization options evolve, there will always be a subset of the population who like to DIY their lipstick for various reasons - ingredient preferences, cost, or just because they like experimenting.  Chapter 9 continued with recipes, but they were really intended more as a joke to show what people did throughout history to make lipstick.  "From the medieval glamour guides, here's a recipe for making lipstick at home:  Go outside. Get a root.  Dry it.  Pulverize it.  Add some sheep fat and whiteners to get desired color.  If you are upper class, go for a bright pink.  If lower class, use a cheaper earth red.  If you are having trouble being pale, and have the money to pay for it, get yourself bled.  If you're alive during the Crusades, wait for the Crusaders to come back, as they'll bring some glamorous and exotic dyes, ointments and spices, and you'll be able to experience the makeup golden age of the Middle Ages." LOL. 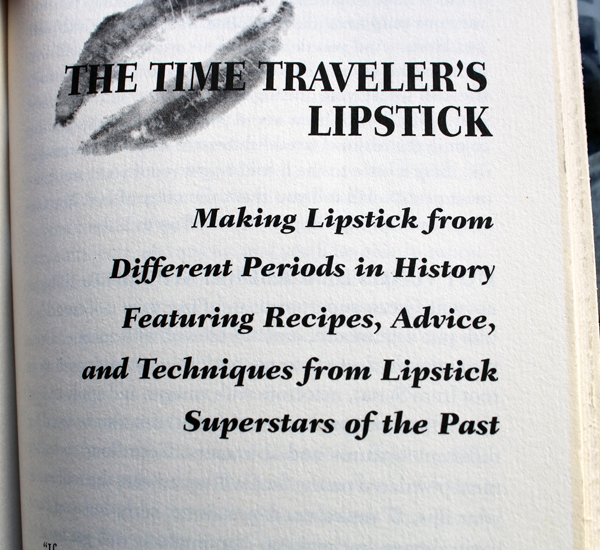 Chapter 10 was a mishmash of suggestions for alternative uses of lipstick and a list of famous art history and pop culture lipstick moments.  Most of the suggestions were good ideas, but some, like no. 21, made me cringe.  Yikes. 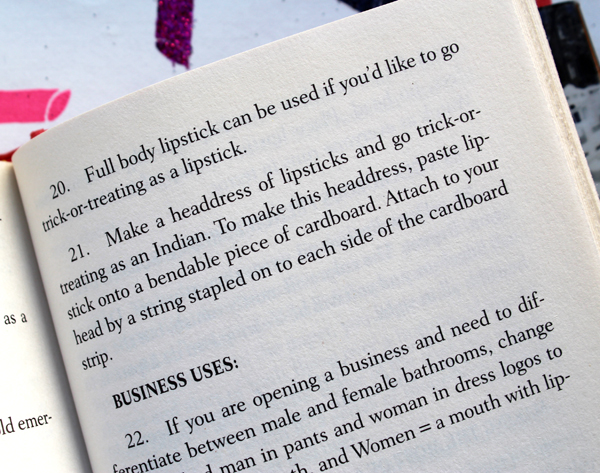 But I did love all the artist references, for they included two I plan on writing about for Makeup as Muse (Rachel Lachowitz and Sylvie Fleury) and Claes Oldenburg's Lipstick (Ascending) on Caterpillar Tracks which I covered back in October. The final chapter (if you can even call it that, as it's only a page and a half) sings the praises of lipstick yet again, and honestly, probably wasn't necessary.

Overall, Lipstick is a nice book for those in need of a primer on lipstick, but if you're in the mood for something more academic or a thorough feminist analysis of lipstick, this is not it.  As noted previously, if you're looking to purchase a book on lipstick history I would go with either this or Read My Lips, but I don't think both are necessary for a beauty library (unless you're like me, who obsessively hoards makeup books in addition to makeup itself).  Lipstick has sound sources, although by now they are a bit dated and I believe are mostly the same as Cohen's.  I will say that the advantage of Cohen's book over Pallington's is the inclusion of photos, which were non-existent in Lipstick.  So it just depends on whether you want a glossier tome with more eye candy or one with less visual frills and more anecdotes, as the information in both is basically identical.

Have you read this one?  I'm really hoping someone will write an updated cultural history of lipstick, as after reading this I think one is sorely needed.

*Another reason I chose to review this book first instead of the others I have planned is that I was recently interviewed by a journalist who is writing a brand spankin' new cultural history of lipstick, so hopefully in the next year or so we will have an updated version (and hopefully I will be quoted!) Stay tuned. ;)