As you know, from time to time I receive email inquiries from people with cosmetics objects they've stumbled across and would like to know more about.  I'm always flattered that people think that I know what I'm talking about and can help them, especially since most of the time I have no idea about the item in question, but sometimes I get irritated when the inquirer's sole objective is to determine how much money they can make off an object they found.  At first it seemed this way when the original owner of this very rare compact approached me, asking for more information and how much it might be worth.  As we'll see, he turned out to actually have an interest in the compact's history and wasn't after profit.

This was an epic find indeed, easily one of the rarest and most valuable in the Museum's collection.  I now present the Ramses powder compact, which debuted in 1923.  The design shows an Egyptian woman in profile, holding a perfume bottle in one hand and a flower in the other, which she brings to her nose to enjoy its scent.  The pyramids of Giza are just barely visible in the background, while lotus flowers on each side towards the lower third of the compact bloom into an arc of leaves. 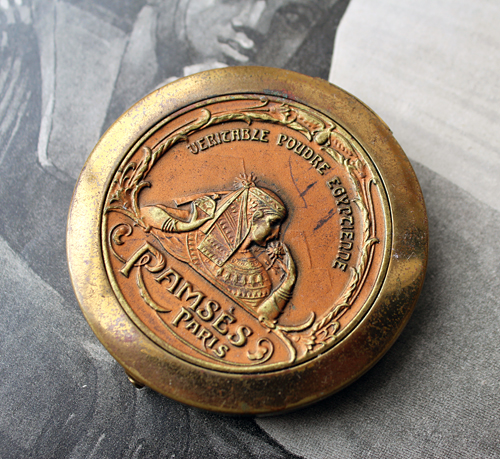 I'm not sure if the woman is supposed to be anyone in particular - perhaps Cleopatra - but given that the design is most likely not historically accurate, I'm not going to dwell on it too much. 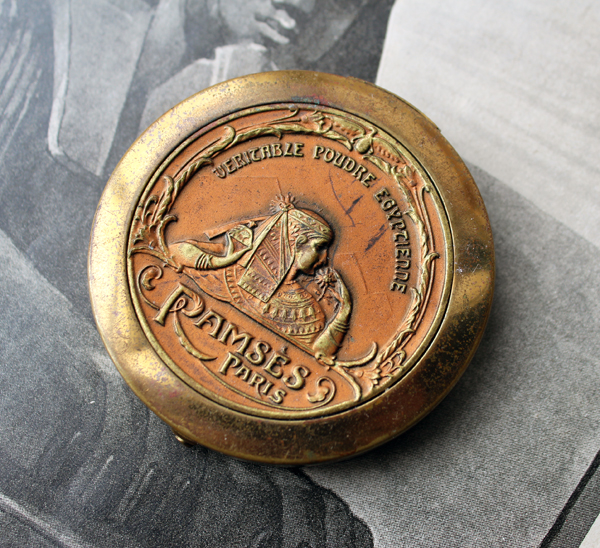 While there are other ads for the powder that show the compact, which we'll see in a second, I wasn't able to locate any originals.  I did, however, find this ad in a French publication from February 1920. 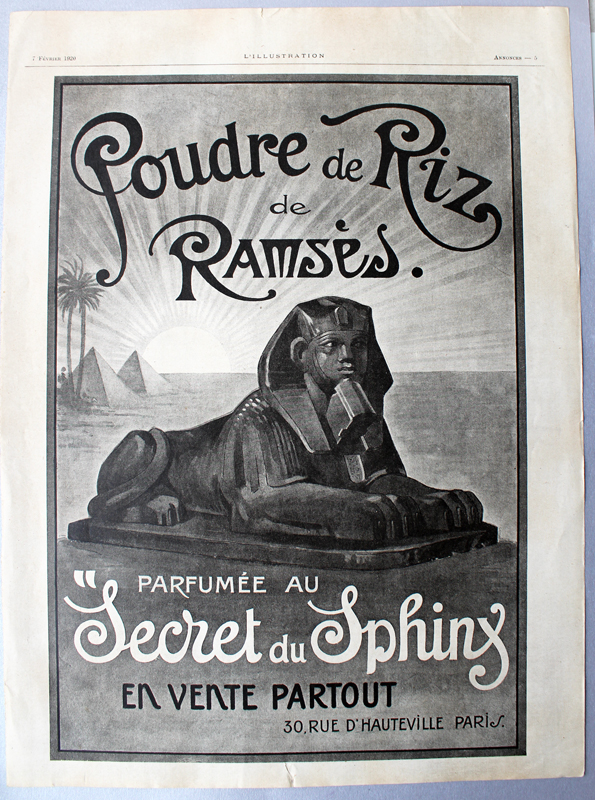 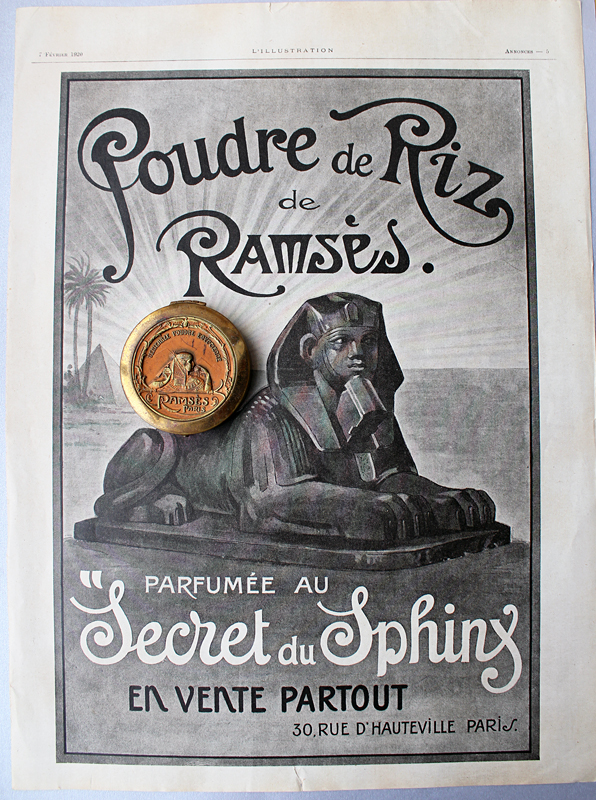 I was hoping to find some good information about the compact for the person who contacted me, and of course, the ever-thorough Collecting Vintage Compacts blog had an excellent post on the history of the Ramses perfume company so I directed the inquirer over there.  I don't wish to regurgitate all of the author's hard work on Ramses' backstory - I highly encourage you to check out the post for yourself - but I will provide the abridged version.  The Ramses brand was founded in 1919 in Paris and selected Le Blume Import Company to distribute the line in the U.S. in 1921.  By 1923 ads for the powder boxes and compacts were appearing in Vogue magazine.   As Collecting Vintage Compacts points out, the ad copy is pure nonsense:  neither the perfumes nor the powders were produced in Egypt and their formulas certainly did not date back to 1683.  How the company even arrived at that arbitrary date is beyond me.  However, with the discovery of King Tutankhamun's tomb in November 1922, the Ramses moniker turned out to be quite fortuitous given the ensuing craze for anything Egyptian - clearly the ads wanted to milk the fad for all it was worth.  The world was now swept up in the latest wave of Egyptian Revival, a style that incorporated various elements of Egyptian art and culture and encompassed design, fashion and beauty (see this compact depicting Theda Bara as Cleopatra and this ad as examples). 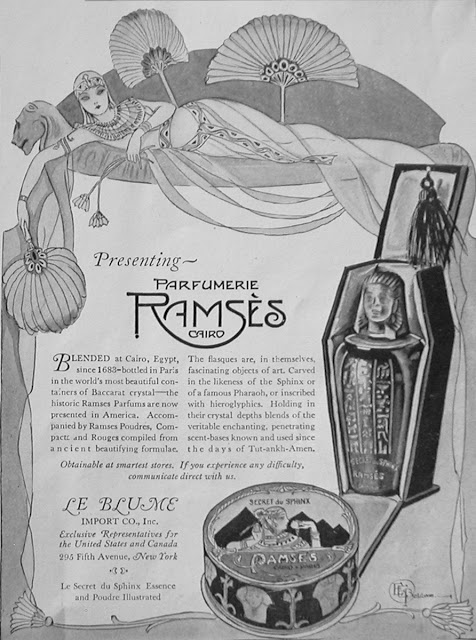 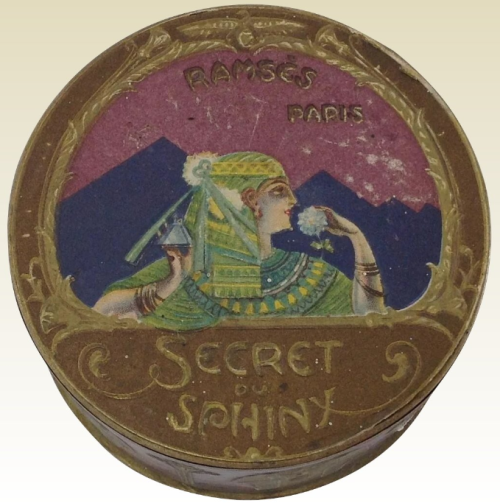 Egypt's influence on Western beauty from the Renaissance to today is a subject I'm looking to cover more thoroughly this year, either in a blog series or an exhibition (or both!) so stay tuned.  As viewed through 21st century eyes, it was clearly unabashed cultural appropriation, a white person's fantasy of "exotic", far-off lands and artifacts.  However, Egyptian inspired-beauty is such a rich topic that I can't bear not to fully explore it...especially now that I have this gorgeous piece in my hot little hands.  Anyway, Collecting Vintage Compacts notes that the Ramses powder case was made by the Bristol, CT-based Zinn Corporation, a company that produced some of the earliest and most memorable compacts in the U.S.  I find it interesting that while the powder was scented with the "Secret du Sphinx" fragrance, the compact itself shows a woman rather than the mythical creature.  Collecting Vintage Compacts speculates, as I did, that the woman could be Cleopatra, but offered the additional option of Ramses' wife Nefertari.  I agree with his conclusion that it really doesn't matter who she is - just a vague Egyptian theme was more than enough to get the point across. 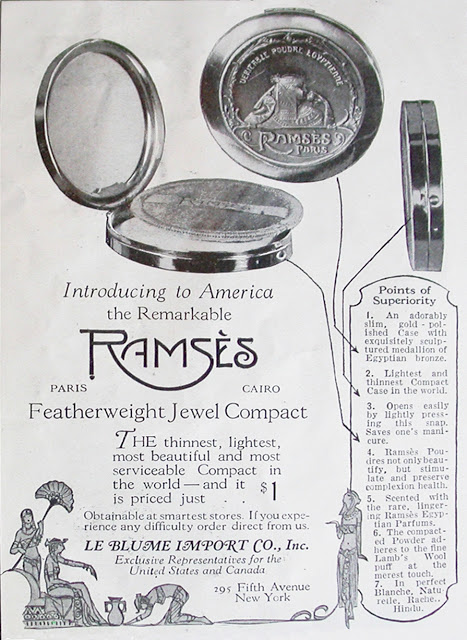 Another version of the compact sported silver edging, a beautiful contrast to the warmth of the brass. 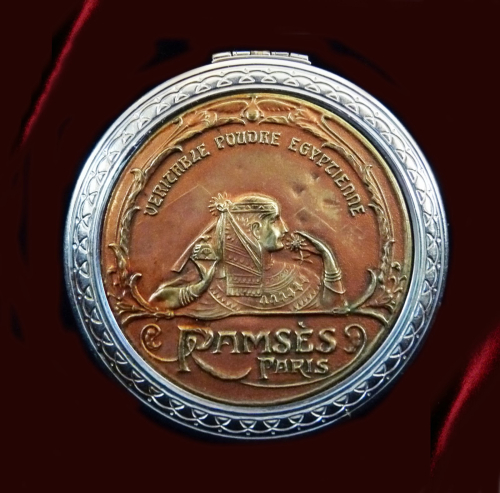 I also spotted some ads in newspapers.  They're not as visually striking as the Vogue ads so I'm not including them here, but they did come in handy for indicating the original retail price of the compact, which was $1.00.  The latest ads I could find were from 1925 and both the perfumes and powder were heavily discounted, which indicates Ramses was a flash in the pan.

But why?  You would think given the era's craze for Egyptian-inspired design, combined with the slight French flavor (another huge selling point - this was a time when companies actively tried to give their lines and products authentic French or at least French-sounding names) the Ramses company would be able to get more a little more mileage out of their products.  Collecting Vintage Compacts unraveled the mystery.  As it turns out, the perfumer behind the Ramses brand, one Léon de Bertalot, had begun quite a shady scheme to sell another one of his fragrances.  In 1914, 5 years before he launched Ramses,  de Bertalot named one of his fragrances Origan.  As we know, Coty's L'Origan (launched in 1909) was wildly popular, pulling in roughly $3 million in sales in 1921 alone.  De Bertalot decided to capitalize on the company's success and began using the Coty name to sell his own Origan, essentially passing it off as a real Coty product.  Coty, rightfully so, cracked down on this very quickly.  On May 15th, 1923 a French court found de Bertalot guilty of "unfair competition", and a few days later the U.S. Treasury mandated that any inauthentic products bearing the Coty name were unable to be imported unless they specifically spelled out that they were not affiliated with Coty in any way.  Since the Ramses brand had nothing to do with Coty I don't know if the Treasury's mandate applied to Ramses as well, but I'm sure the 6-month jail sentence and fine of 100,000 Francs handed to de Bertolot essentially meant the Ramses brand was out of business.  Hence the price markdown of their products by 1925 - I'm guessing stores in the U.S. were trying to offload any leftover stock that was originally imported two years prior.  The Le Blume Import Company, in turn, was no longer allowed to distribute any perfumes from any company whatsoever.  However, it did import dusting powder tins and glass jars using the Ramses name in the late 1920s. 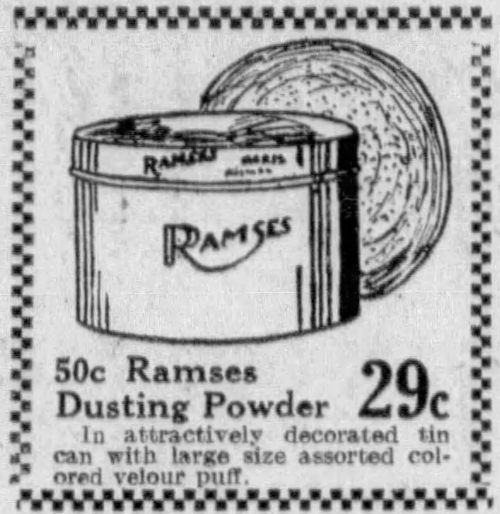 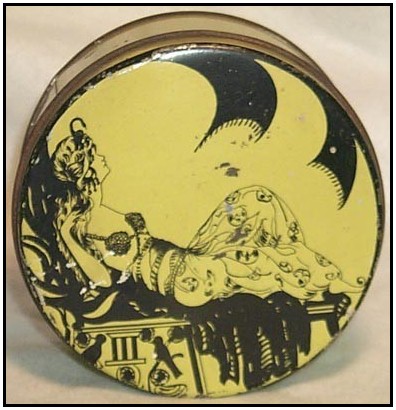 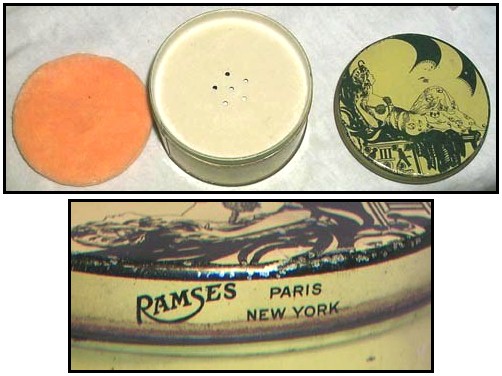 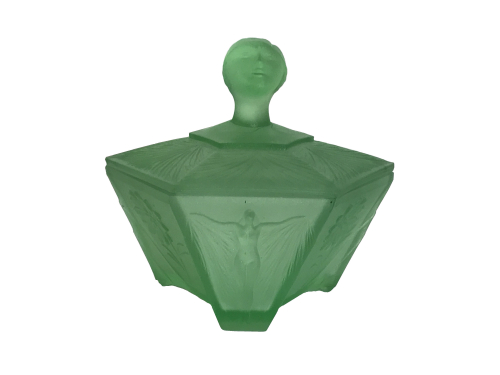 (images from Vanity Treasures and Etsy)

Getting back to the original inquiry that was the impetus for this post, here's the story of how the compact got into my hands from the person who emailed me originally (we'll call him C.)  He had found it for $10 in a thrift store (!) but given the unique design, figured it was worth more.  After looking through all my collector's guides and not turning up anything, I directed C. to Collecting Vintage Compacts and asked him to please let me know when/if he decided to put it on the market.  Obviously I also indicated my great interest in obtaining the compact, but lamented that it was most likely out of my price range.  Well, don't you know C. actually wrote back telling me that he was going to put it up for sale on Ebay, but said that while he'd like to get a good price for it (that's only fair, who wouldn't?), he believed that the Museum was the rightful place for the compact, given its rarity and my passion for lovingly researching and preserving these sorts of items.  Thus he kindly offered to sell it to me directly and negotiate on price.  In the end I think we both got a great deal - he got way more than what he had originally purchased it for and roughly the amount he would have gotten for it if he had put it up for public sale, and I got an amazing find at a fair price for which I was able to avoid an ugly bidding war. 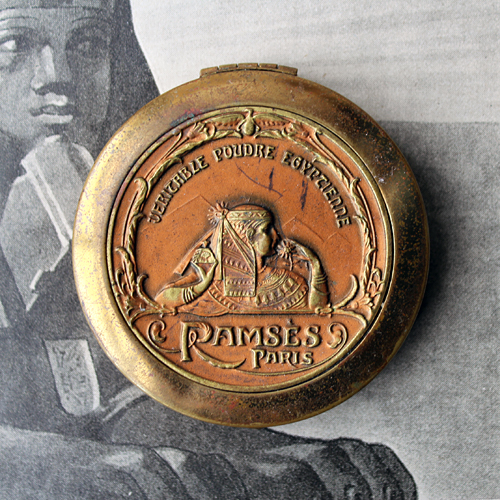 After reading the Ramses history at Collecting Vintage Compacts and browsing the Museum's site, C. seemed genuinely interested in the compact and in the Museum's mission, so I was very happy to see he wasn't just in it for profit and was willing to work with me to ensure the compact went to a great home instead of merely to the highest bidder.  :)  I really appreciated it, as so many people who ask about value just want to know how much they can get for an item and have absolutely no consideration for the object's history or the Museum, which, as a reminder, is funded entirely out of my own pocket.  Not that anyone is obligated to donate rare and valuable items, of course, but they could follow C.'s example and be open to selling their item to me at a price that works for both of us.  I know if I came across an object I have no interest in but that other collectors might - say, a rare Barbie Doll - I'd seek out someone who would truly treasure it and give them first dibs. 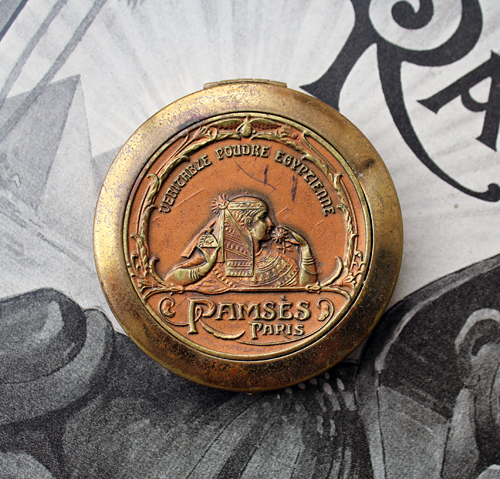 What do you think?  And yay or nay on a series/exhibition on Egyptian-inspired beauty?