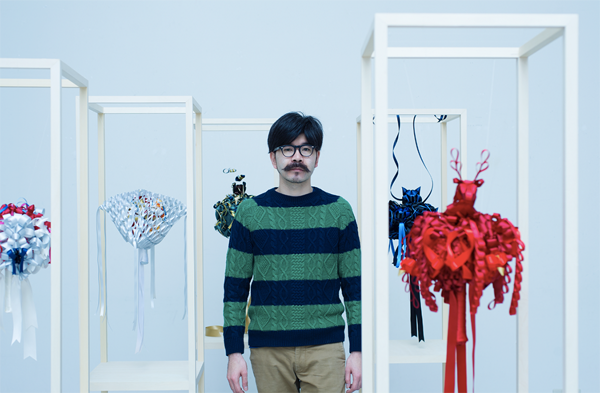 Yet again I find myself completely entranced by another artist collab this holiday season.  For their 2018 holiday collection, Shiseido teamed up with Japanese artist collective Ribbonesia.  Like last year's partnership with Sisyu, the product lineup is fairly small, consisting of two cushion compacts, puff, lipstick set and Shiseido's famous Ultimune serum.  I skipped the lipstick since the packaging design wasn't as interesting as the cushions and the serum since I try to avoid spending precious Museum dollars on skincare rather than makeup.  The chosen theme for the collaboration was "beauty is a gift", and according to this site, "[uses] satin to express the bud of life in nature and the red string of fate that connects people." Mmmkay. Unfortunately I couldn't really dig up much more information on how the collab came about or the particular designs on the makeup.  I will say that they are beyond festive.  Folding, looping, swirling shiny ribbons that form bows, flowers and even birds evoke a joyous holiday complete with beautifully wrapped presents.  The color scheme is also seasonally appropriate:  red and gold with hints of green, blue and pink are reminiscent of the multicolored strands of lights adorning a Christmas tree. 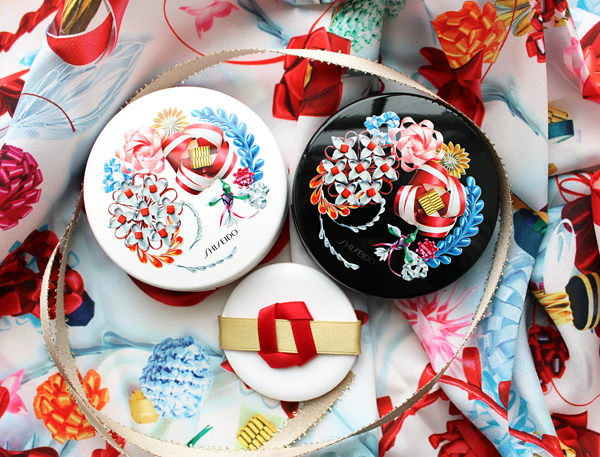 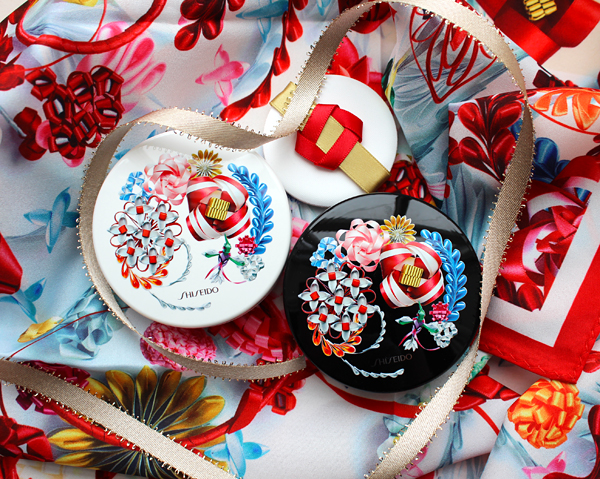 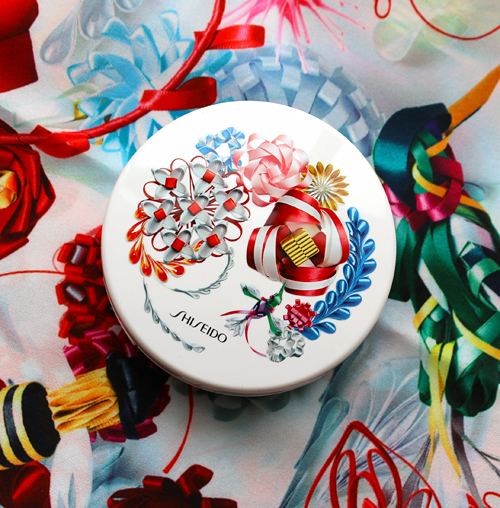 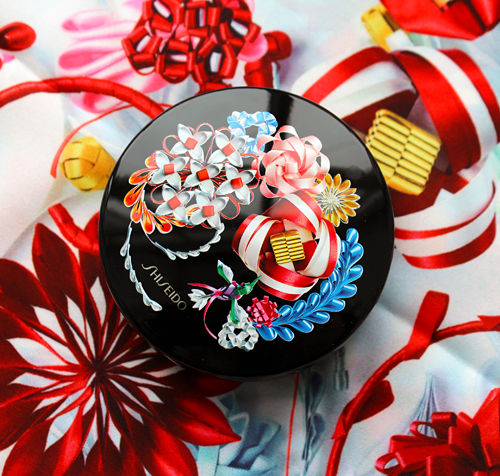 So who is Ribbonesia?  The group consists of artist Baku Maeda and creative director Toru Yoshikawa.  Maeda, who originally started out as an illustrator, began experimenting with ribbon designs in 2008.  Given their success, in 2010 he and Yoshikawa officially established Ribbonesia.  Maeda has a lifelong fascination with origami, so manipulating ribbon to make elaborate shapes came naturally.  (In fact, given Maeda's focus on animals, his designs remind me a bit of origami artist Hoang Tien Quyet, who I featured in this Guerlain post.)  Maybe it's because the Jen Stark/Smashbox collab is still fresh in my head, but elements of Ribbonesia's work sound similar: specifically, taking a fairly simple, flat material and creating very intricate and three-dimensional pieces entirely by hand.   Says Maeda, "Wrapping ribbons are everywhere, but they are purely decorative: familiar but unessential. We wanted to put it to use. It’s like three-dimensional painting: each twist is a brushstroke. The reflectiveness of ribbon and the way it reacts to light gives it a new face and new impressions at different angles, creating this wonderful energy. Of course, it can be tricky to use – you can’t make any shape you want. You have to work with the physics of the fabric, because it has its own tension and character. But that’s what makes it so interesting...growing up in Japan, I was always playing with paper and making origami. I think that has influenced the way I use my hands. I like tactile art: translating a flat illustration into a 3D object and forming flat ribbon into something with body."  I can only imagine how long each piece takes; it doesn't sound like Maeda uses any kind of advanced technology or shortcuts to make the shapes he does.  And like Stark's work, each piece shifts as viewers walk around it, albeit in different ways. 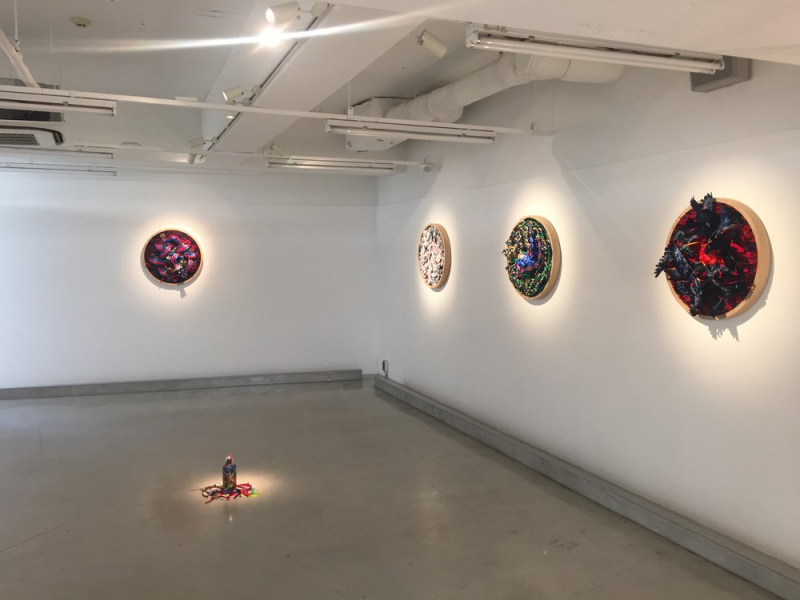 I have to point out that it takes considerable skill to be able to go from 2D to 3D.  One of the menial tasks I'm required to perform on occasion at my miserable job is assembling bankers' boxes.  It usually takes me about 20 minutes and several tries before I get it right.  Needless to say, I'm always amazed by how artists can bend and fold various materials to create recognizable forms, and beautiful ones at that. 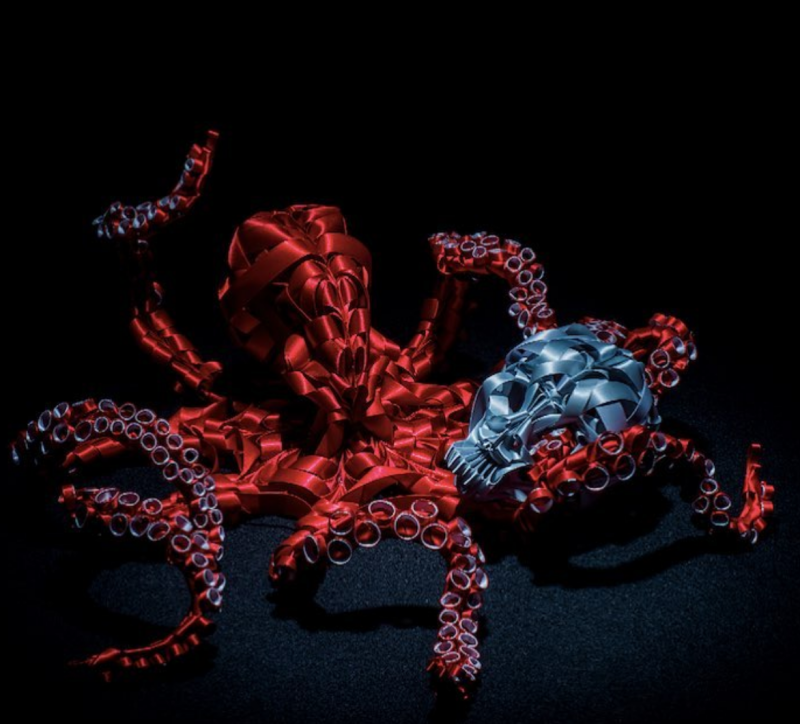 Another similarity between Ribbonesia and Jen Stark is the focus on the complexity of natural forms and making it more visible.  While Maeda's work is more literal and doesn't delve as deeply into mathematical concepts, the two artists share a love of bringing overlooked natural phenomena to the surface.  "I look to nature for inspiration – animals, flowers, the seas and ocean. The movement of ribbon feels very organic, and the natural world is full of wonders. A lot of our art highlights the little things that you know are there but didn’t notice before," explains Maeda.   In addition to Ribbonesia, Maeda's other work (see his "leaf beasts" and "bit leaves" series) demonstrates his passion for emphasizing the often-missed parts of nature and transforming the mundane into something new and different.  “I do not consider myself a designer but as someone trying to create something that has never been seen before."

There were so many breathtaking designs in Ribbonesia's oeuvre that I had a significant amount of trouble narrowing down and organizing the images I wanted to feature in this post.  In the end I decided to go in rough chronological order, as I think it shows the evolution of Ribbonesia's work.  These whimsical animal brooches are fairly early on in Ribbonesia's history, around 2011 or so.  Once again, the idea of taking some ribbon and making a sculpture out of it blows my mind.  In addition to any sort of box, I can't fold a nice gift bow to save my life - hell, I can barely tie my shoes, and you can see my sad attempt at styling ribbon in my photos above - so while these are less intricate than Maeda's future creations, I'm still in awe.  Yes, these are the "simple" designs.  This particular image comes from a book of Ribbonesia's early work.  If only I had known about it before writing this post, I would have bought it since books are my favorite background for blog photos.  (The Ribbonesia scarf I obtained is pretty sweet though - the story of how I managed to get that will be in a later post.) 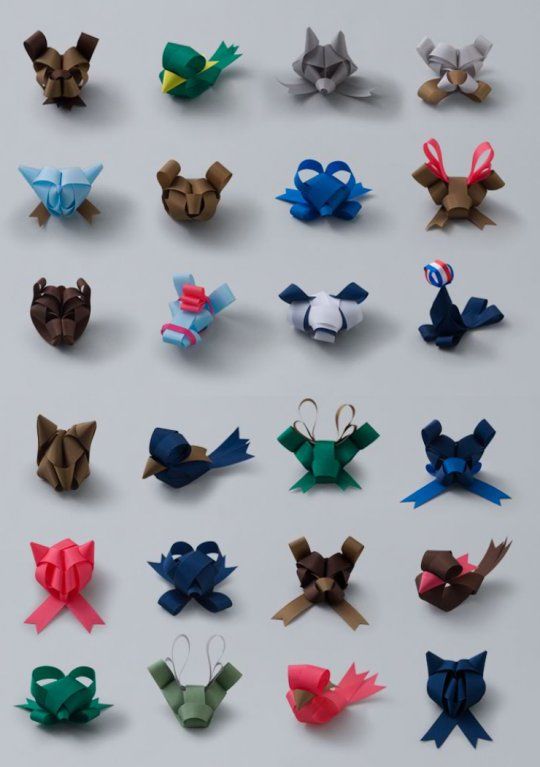 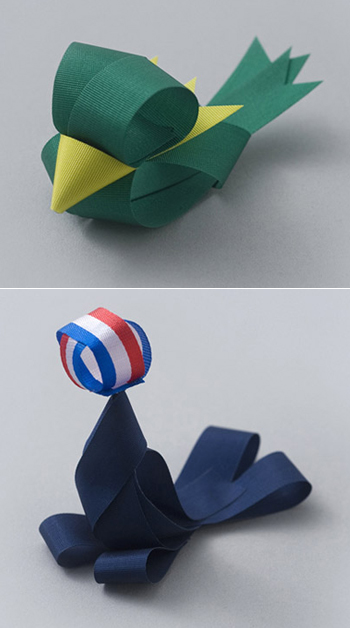 Here they are in action.  I'd love a mermaid with scales made of different colored ribbon.  Or maybe even a little lipstick! 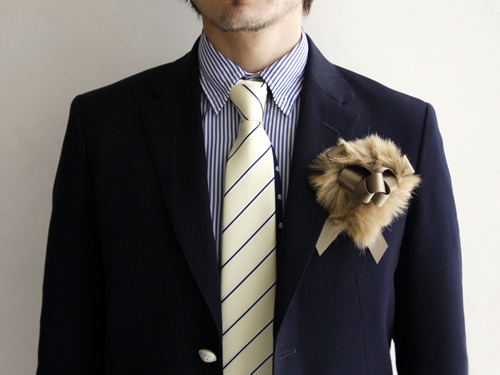 By 2013 Ribbonesia had reached new heights, literally and figuratively, with a series of incredibly elaborate headdresses.  I'm struck by the various patterns formed by intertwining different ribbon colors, such as the ears of the goat (?) on the left and the middle section of the piece on the right. 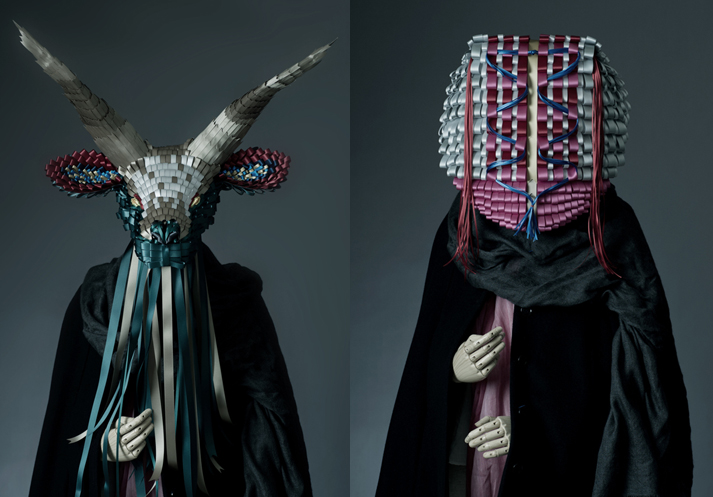 In 2015 Ribbonesia launched a forest-themed exhibition.  It was an absolutely magical wonderland that depicted a variety of flora and fauna in all sizes and colors. 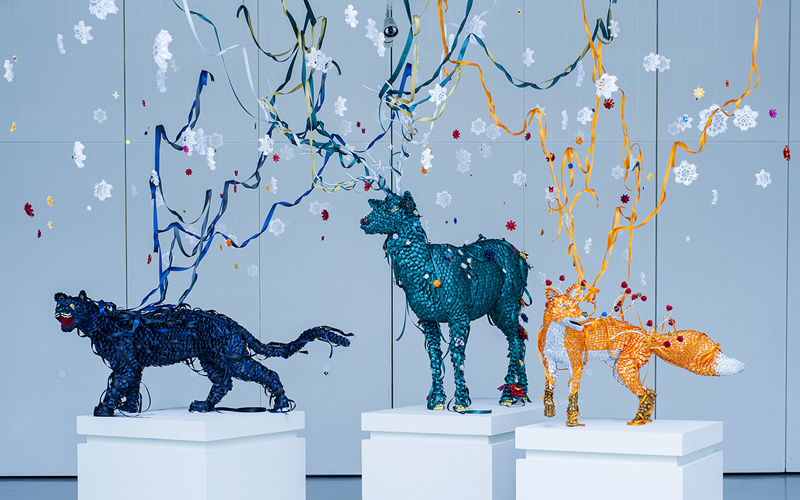 I appreciate the strands of ribbons hanging down as garlands, as they heighten the energy and dynamism of the sculptures.  In their natural, basic state, they also serve as a reminder of how a simple material can be transformed into something magnificent. 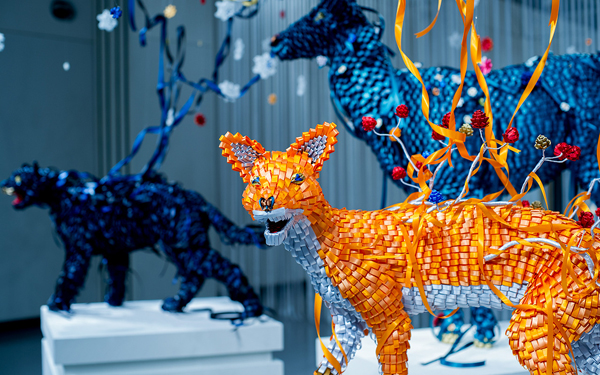 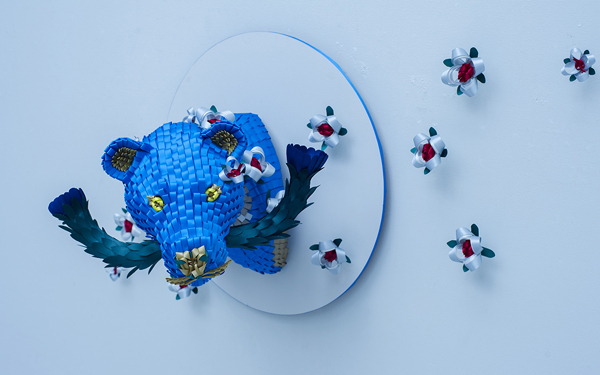 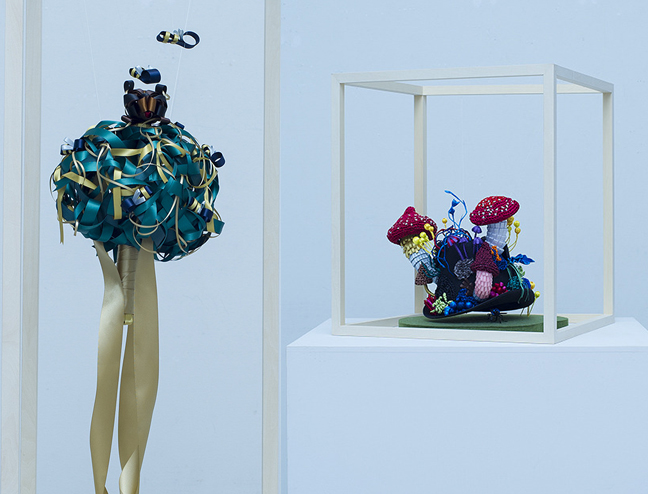 A year later, Ribbonesia created a series called Eternal Cosmos.  When combined with titles like "Gift from God", the works' flowers and animals appear slightly less playful and perhaps linked to the spiritual realm.  This connection is an avenue Ribbonesia seeks to explore: "Ribbonesia focuses on natural shapes because we see an essential beauty in every regularity and complexity within the natural world, its necessity, and how it functions as a whole.  Normally beauty appears in nature as the ‘result’ of natural habitats being reborn over and over again. Ribbon forms are also the ‘result’ of elastic and tensile forces ‘working with each other’. This unexpected beauty is almost a ‘property of the gods’. Ribbonesia experiences this encounter between beauty and a universal nature, out into the cosmos, and beyond." 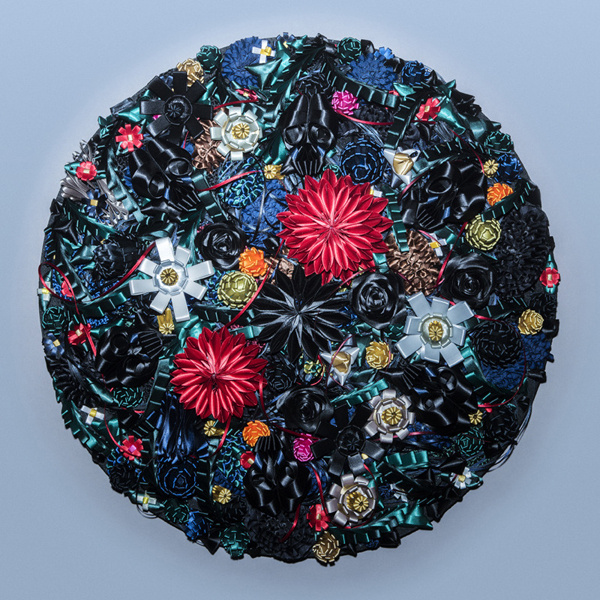 While the floral inspired piece above is beautiful, it's the sea creatures that captured my heart.  Crabs, squid, jellyfish and an octopus swim alongside sand dollars, shells and even coral.  These perfectly rendered seascapes are a testament to Maeda's incredible talent and creativity. 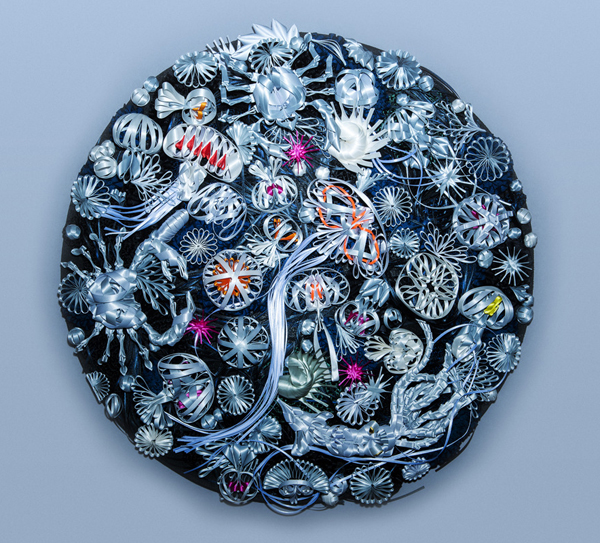 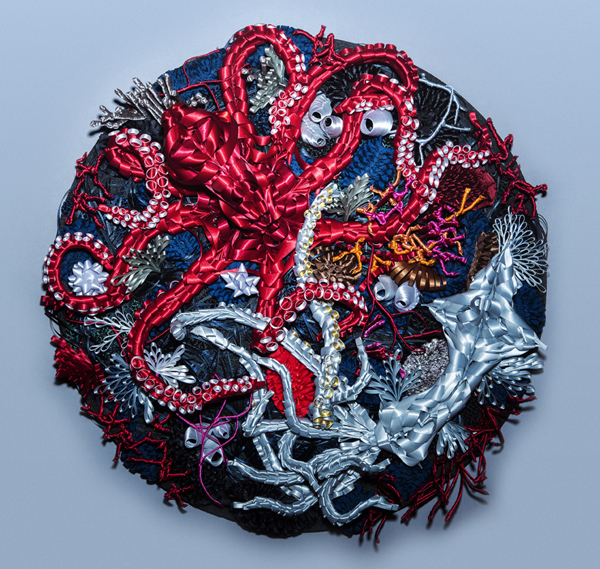 I know I'm repeating myself but I could sit there with a pile of ribbon for a hundred years and never figure out how to make anything that would remotely resemble an animal, let alone one with this kind of detail - look at the suckers! 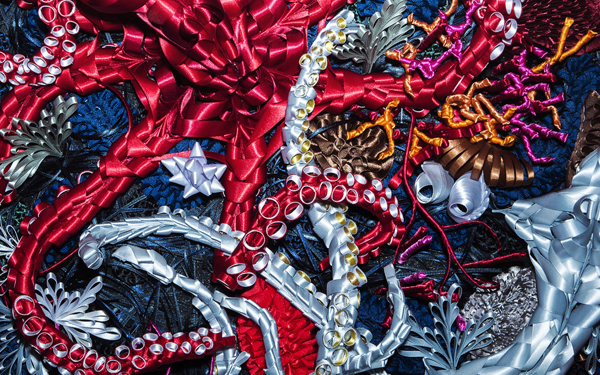 Last year Ribbonesia continued showcasing their work at an exhibition in Tokyo entitled Murmur.  I'm not exactly sure what this one was about, but the works are stunning. 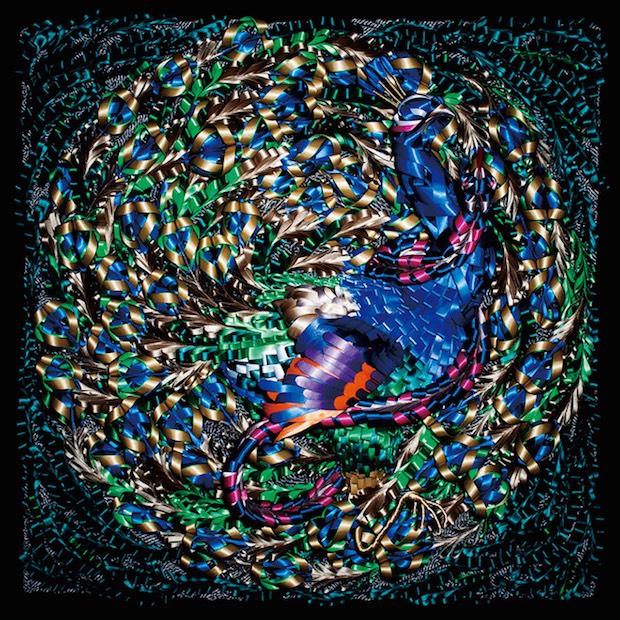 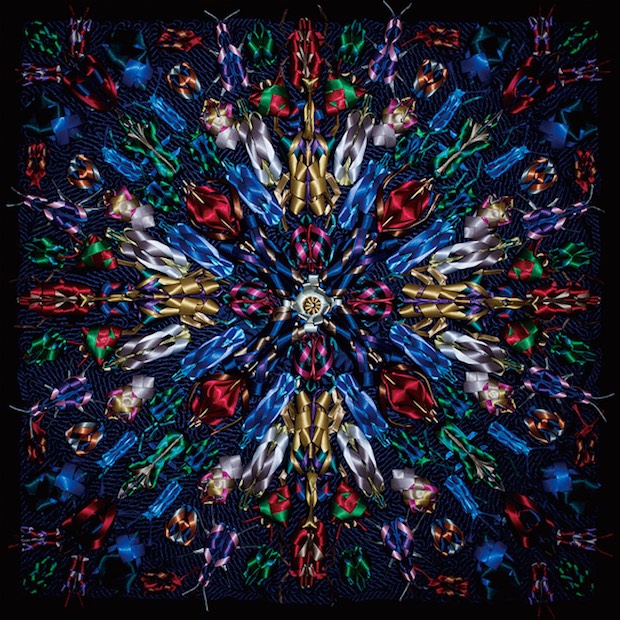 Naturally, Ribbonesia caught the attention of various companies eager to collaborate.  In 2014 Ribbonesia was charged with designing the windows and interior spaces for Hong Kong department store Lane Crawford. 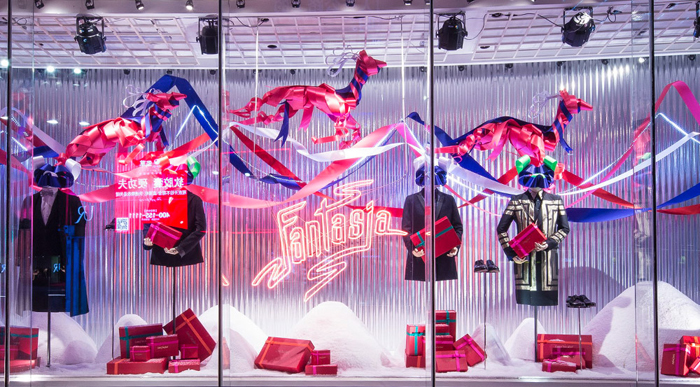 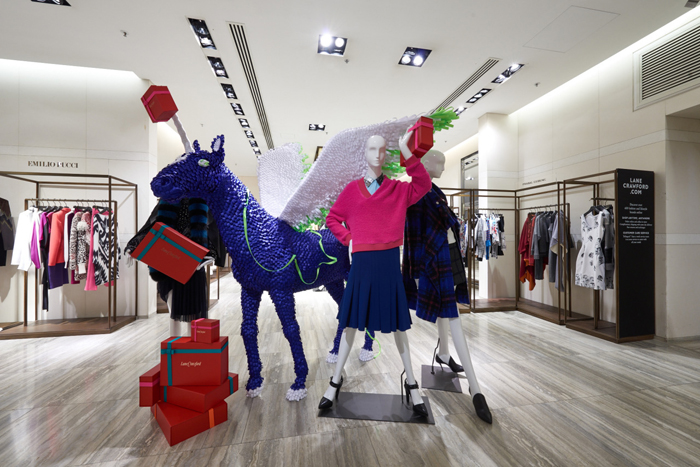 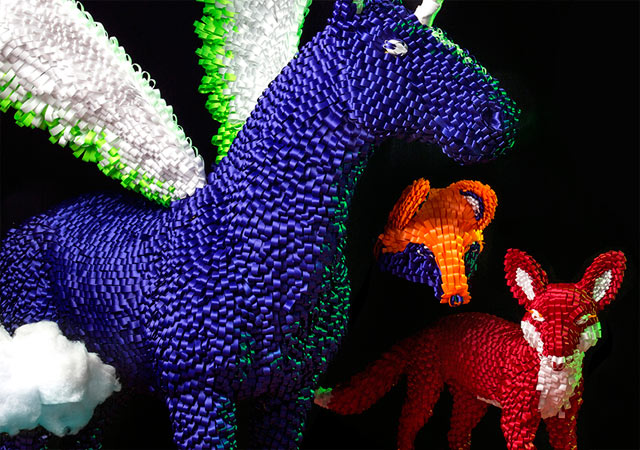 This endeavor was followed up in 2017 with a holiday display for the Shibuya location of Japanese department store Seibu. Earlier this year, Ribbonesia lent their talents to fashion label Comme des Garcons with a trio of t-shirts. 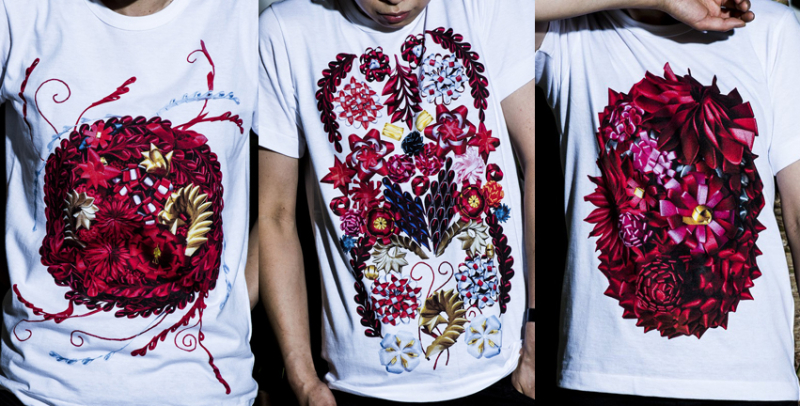 In light of these collaborations, it's no surprise Shiseido wanted to work with Ribbonesia.  While I liked the collection and obviously adore Ribbonesia's work, I'm not entirely sure it's the best fit for makeup or clothing.  Given the emphasis on three-dimensional contours, I feel that the magic of these ribbon sculptures is a bit diminished when applied to a 2d surface.  I'm not sure how a makeup collection could have been designed to maintain the texture and shapes of intricately folded ribbon, but seeing the designs on a flat cushion compact doesn't have quite the same impact as viewing a sculpture.  Maybe they could have gone the MAC Shiny Pretty Things route and embossed a bow or two onto a highlighter or blush to have some semblance of a 3d effect, or even somehow have ribbons affixed to the outer cases.  Having said that, I always appreciate an artist collab, especially when it's an artist I'm not familiar with, as it introduces me to a whole new body of work.  In this case I was delighted to learn that such a thing as ribbon art exists.  And the colors and designs are perfect for the holiday season. I just wish I had more information about how the collection came to be and if the designs were created by Ribbonesia especially for Shiseido.

What do you think of Ribbonesia and the collection?  Are you good at wrapping gifts?