Avon's calling for a vintage Christmas

This was such a nice surprise from Avon.  I tend not to pay any attention to this brand as I'm more interested in their vintage products and ads, so imagine how delighted I was to see the company had reached into their archives and used some of the old ads I love so much for part of their extensive holiday collection.  Called "Once Upon a Holiday," the only information from their end that I could find was from the description of this brief video.  "Avon has always known the importance of holiday traditions. That's why we've created a limited-edition iconic collection, inspired by our rich heritage."  I would have liked to know more about why Avon decided to use their vintage ads and why they chose the ones they did, but I will say I think they selected some of the better ones.

We'll start with my favorite, the 1945 angel ad illustrated by the Ukrainian-born Vladimir Bobri (1898-1986).  You might remember this one from the celestial-themed holiday 2014/winter 2015 exhibition.  I really hope to get around to writing a full post on Bobri and diving into all the ads he did for Avon, but briefly, he was sort of a jack of all trades - illustrator, author, costume designer, composer and classical guitar historian.  In addition to Avon, he did illustrations for The New Yorker, Vogue and Harper's Bazaar.  This ad is seriously one of my all-time favorites, holiday or otherwise.  I always interpreted the beautiful angel as a harbinger of peace, keeping watch over a quaint small town on a snowy Christmas night (and making sure the townsfolk get their gifts!) As you can see, this illustration was used on one of the five lipsticks included in Avon's holiday 2018 lineup. 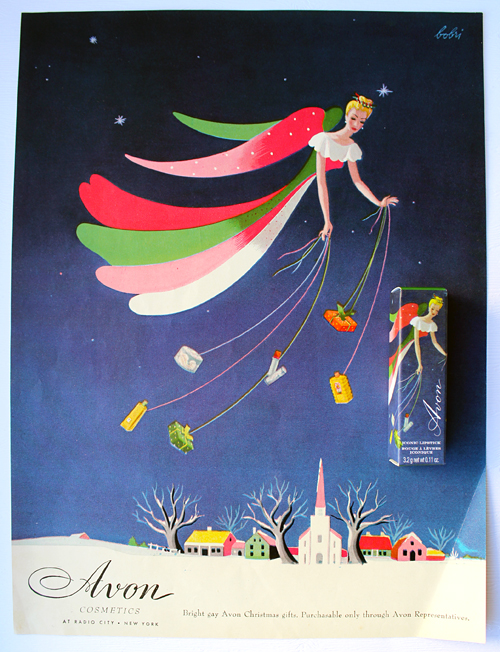 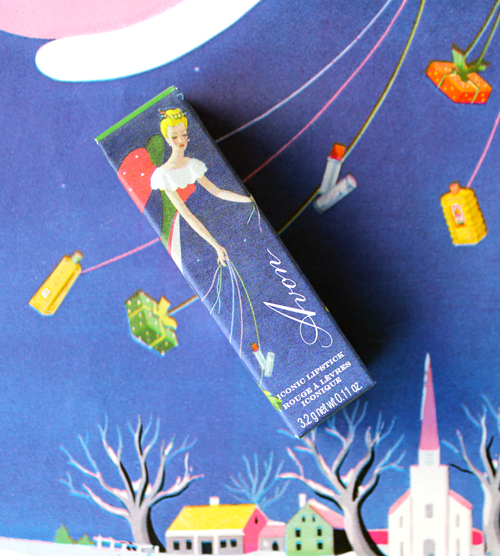 The lipstick itself is a festive red shade, reminiscent of the one the angel is delivering. 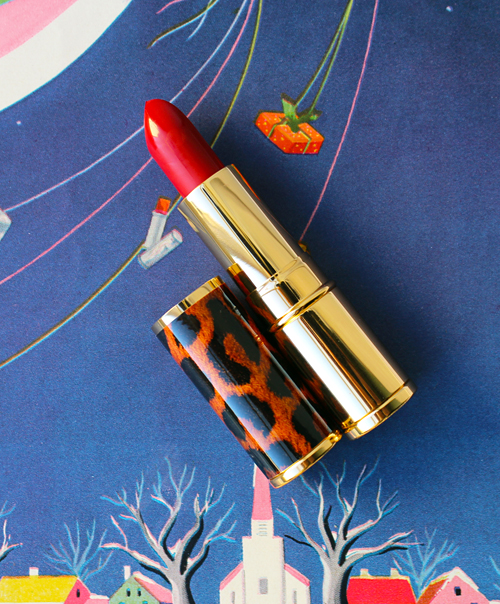 I couldn't resist picking up the ornament with this illustration! 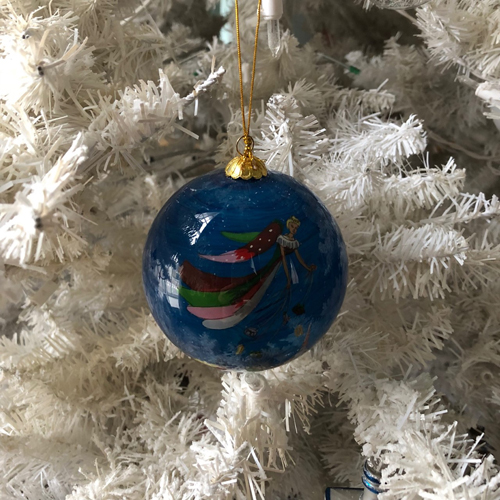 Next up is another by Bobri, this one from 1946.  The scene depicts a Victorian-era couple, with a dapper gentleman on ice skates giving a sleigh ride to his equally well-dressed female partner.   Above them a pine tree garland filled with ornaments and Avon gifts festoons a starry night sky.  You simply don't find this kind of charm in today's advertising. 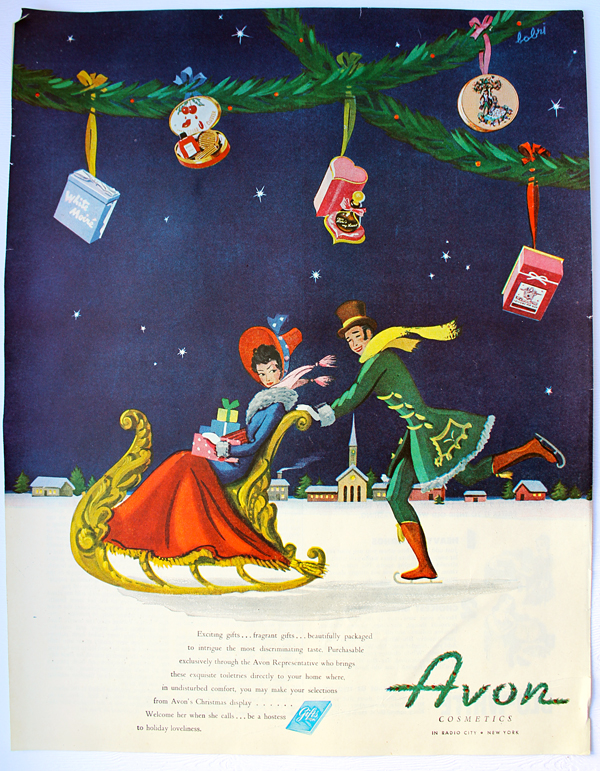 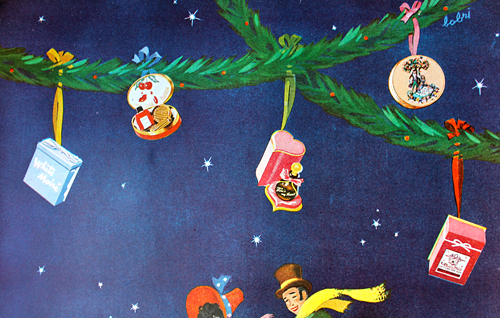 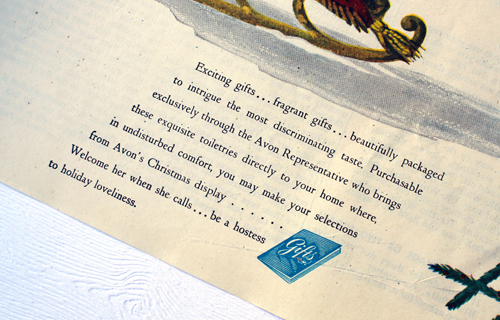 The ad was used for the packaging of Avon's eyeshadow palette. 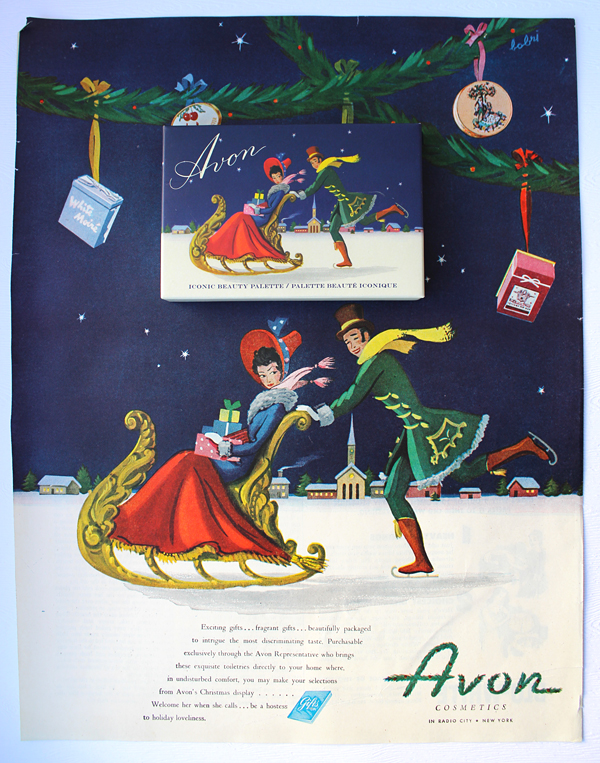 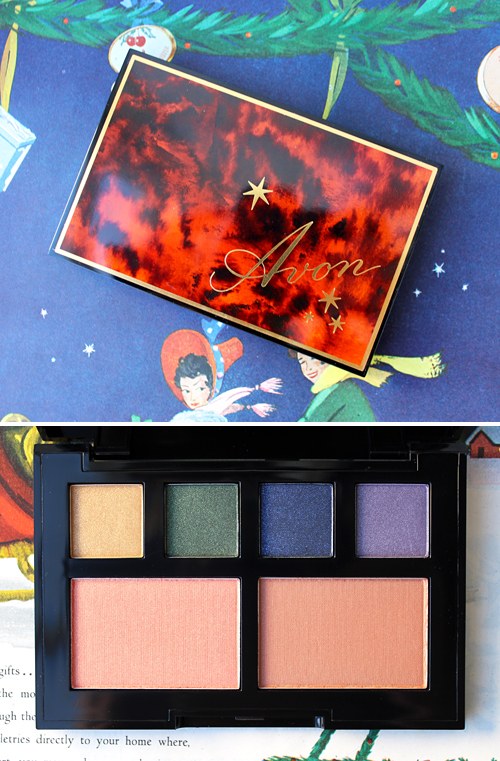 Here are 3 of the other lipsticks.  (In my excitement to order I neglected to add all 5 to my cart. #curatingfail)  I didn't see the original ads for sale anywhere so I will keep hunting, but I was able to find images of them. The packaging of the lipstick on the left features an ad from 1942, which ran in Vogue. A woman in a red cloak with a sprig of holly in her well-coiffed hair dashes around New York City to get her Christmas shopping done.  I can't make out the signature - it looks something like Stahlut or Stahlest - but I know it's definitely not another illustration by Bobri. 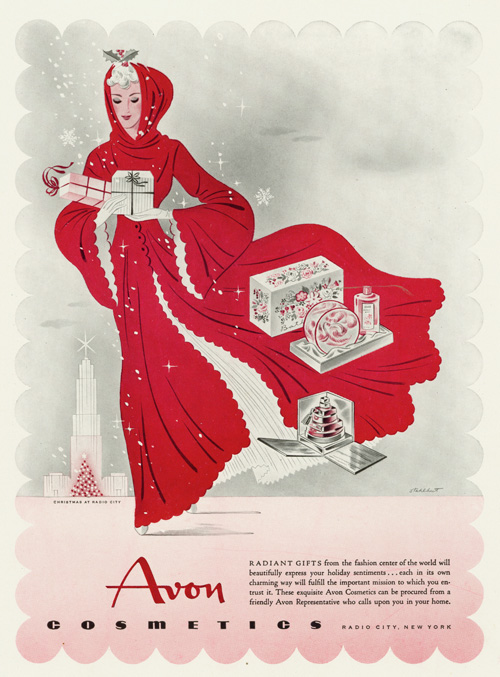 The woman in the green dress on the lipstick in the middle is from a rather patriotic 1943 ad, which makes sense as the U.S. was fully entrenched in the second World War by then.  As the Avon blog notes, this ad was actually part of a series intended to lift women's spirits during wartime.  "Amid the trials of the World War II era, Avon’s 'To the Heroines of America' campaign debuted as a morale-booster depicting present-day women reflecting on brave female icons of the past. Noting 'the brave color of her lips and cheeks,' the series encouraged women to stand strong like their predecessors."  This one is unsigned as far as I can tell, and although he did illustrate several other ads in this series, this doesn't really look like Bobri's work.  A mystery for the ages! 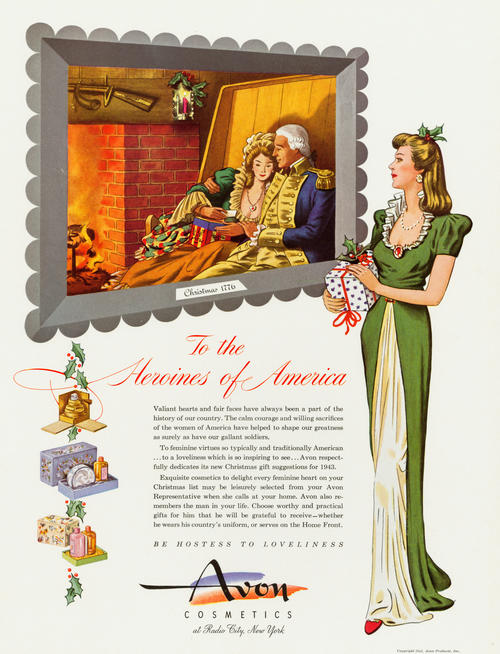 The lipstick on the right is from a 1947 ad for Avon's Wishing fragrance, which depicts a woman wistfully gazing (and presumably wishing) upon a bright star.  A source for this image indicates it's from the June 1947 issue of Good Housekeeping so technically it's not a holiday ad, but it works pretty well in my opinion.  Once again I'm not sure who the illustrator is. 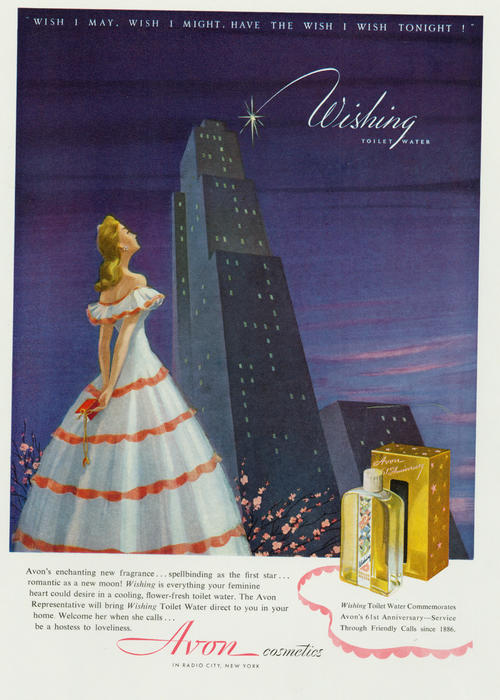 (images from the Hagley Digital Archives)

My only gripe with the Avon collection is that the images weren't printed on the palette or lipstick caps themselves, only on the outer packaging.  Still, the inner packaging was adorned with stylish prints:  tortoiseshell for the palette and leopard, houndstooth, chevron and plaid for the lipsticks. 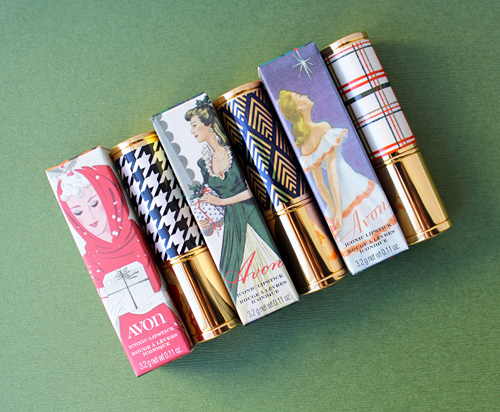 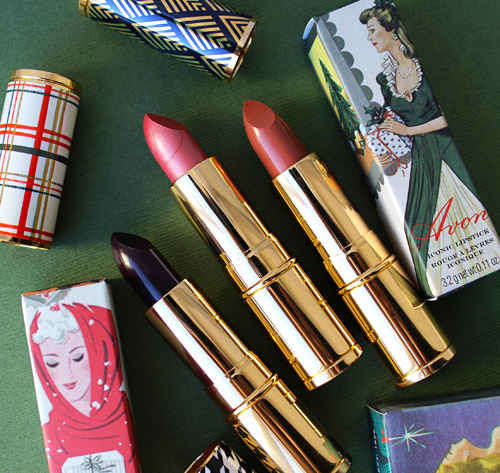 I wasn't able to track down the ad used in the packaging for the final lipstick, which I accidentally left out of my order and didn't realize until I went to take pictures for this post.  Whoops. However, the font is identical to one used in other Avon ads from the early '40s so my best guess is that it's from 1940-1942. 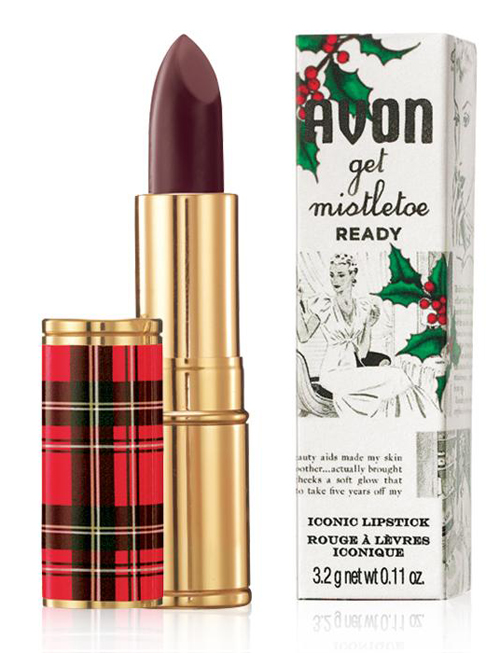 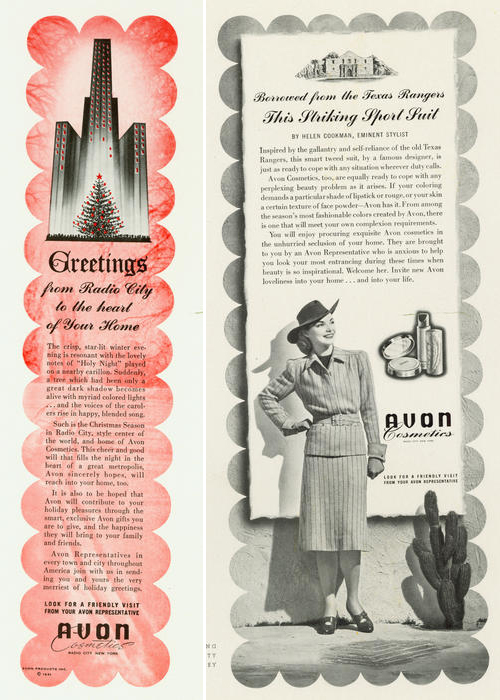 (images from the Hagley Digital Archives)

There were a few other items in the "Once Upon A Holiday" collection; however, since they did not feature any additional vintage ads I skipped them. Overall I'm really pleased that Avon came up with a nostalgic, vintage-themed collection using their old ads and I hope they do this again next year with different ones, as there's no shortage of adorable Christmas ads in their archives.  It's a great way to highlight the company's history while delivering fully modern products that meet the needs of today's makeup wearers.  I wish more companies would do this!  Lancôme, Shiseido and Bourjois have been known to occasionally celebrate their heritage by modernizing some of their iconic packaging or incorporating significant design elements from their vintage products into new ones, and obviously fashion houses (Chanel, Dior, Armani, YSL, etc.) look to their fashion archives for inspiration, but I'd love to see more brands take a look back and pick out some vintage ads or other items to feature.  Estée Lauder, I'm looking at you.

What do you think?  Which vintage ad is your favorite?