As with Gudetama, I wasn't sure what I was looking at when I first laid eyes on Holika Holika's collection featuring a character named Peko, but was definitely intrigued.  Japan is known for its adorable mascots and this little gal is one of the earliest ones.  Peko-chan, as she's affectionately known around the world, is the official mascot for Milky, a chewy, sweetened milk-flavored candy introduced by the Fujiya company in 1951. Naturally I had to try it for myself...plus I figured the candies would be good for photos.  :) 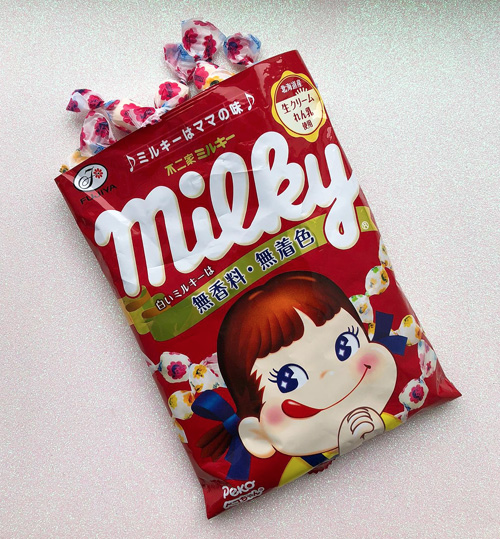 Fujiya's fascinating history goes even further back, having been established in 1910, but obviously it's Peko I want to focus on.  I limited myself to 3 items from the enormous Holika Holika collection.  I love Peko's little pigtails and slightly stuck-out tongue, and her cheeks remind me of those from the Utz girl.  (I'm not the only one who sees the similarity in these two mascots).

There is a foundation cushion compact inside this milk container, but obviously I couldn't bring myself to open it. 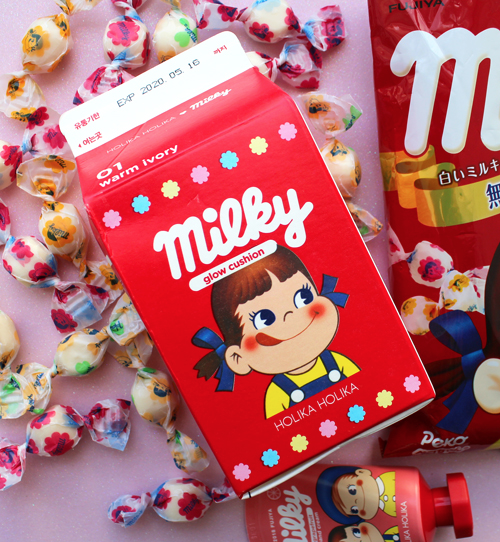 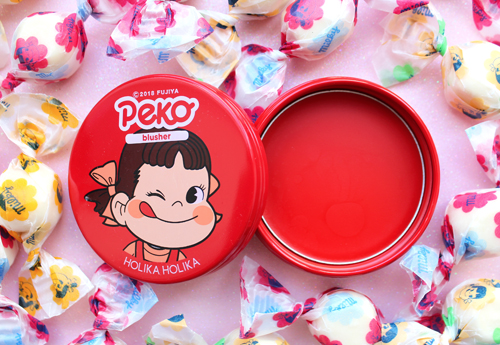 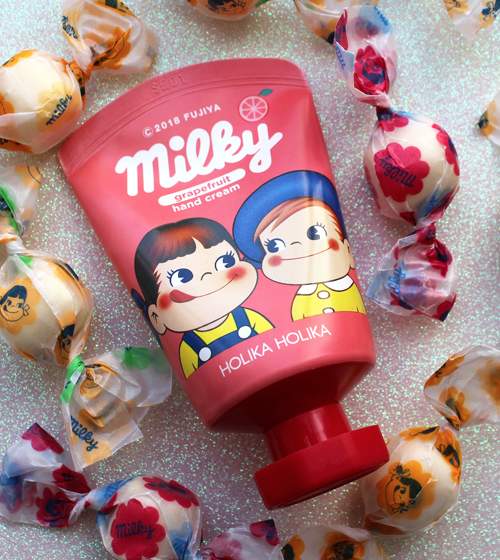 Who is Peko, exactly?  There wasn't a definitive history that I could find, but this brief article states that Peko is an eternally 6 year old girl who was born in the "land of dreams somewhere on earth" in 1950.  She stands at 100cm (about 39 inches, so just over 3 feet tall) and weighs 15kg (33 lbs - obviously neither measurement is meant to represent your average 6 year old).  Her hobbies include baseball and pogo stick jumping, called "hopping" in Japanese, and her favorite animals are puppies. Her name is inspired by "beko", the northern Japanese dialect for "cow".   In 1951 her boyfriend Poko was born, who is also forever a child, just a year older than Peko.  Poko comes from the word for "boy" ("boko").  (I bought the hand cream especially for Poko.) Both characters were originally introduced as papier-mache dolls, but proved so popular that they expanded into all sorts of materials as well as outfits and costumes. 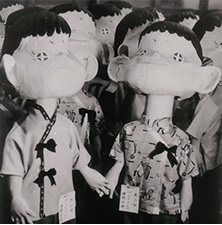 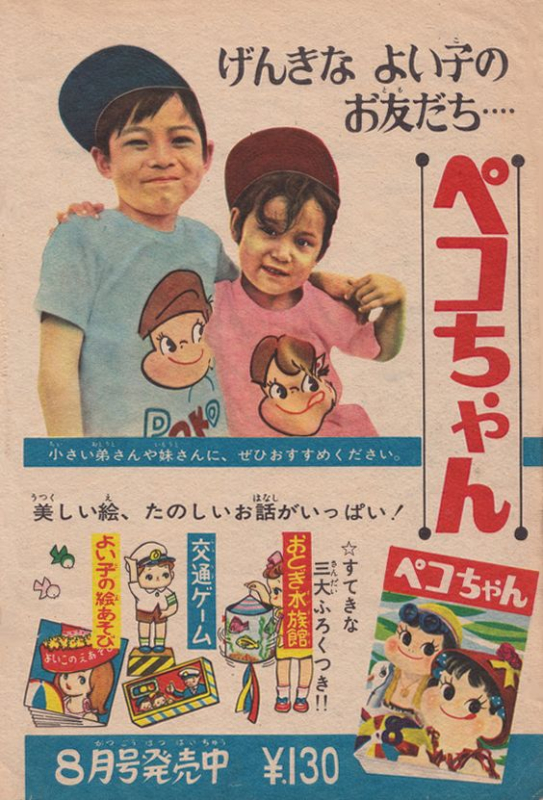 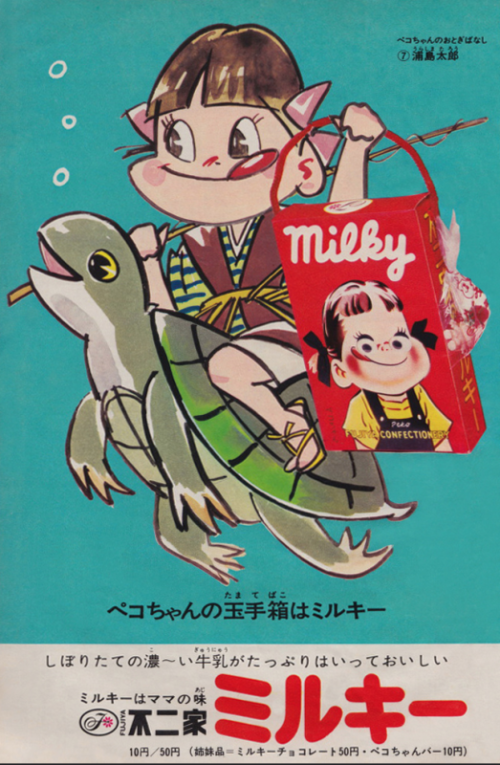 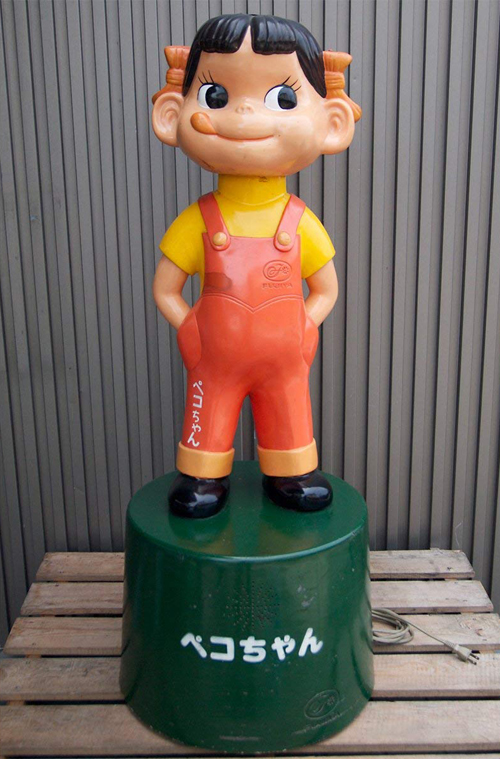 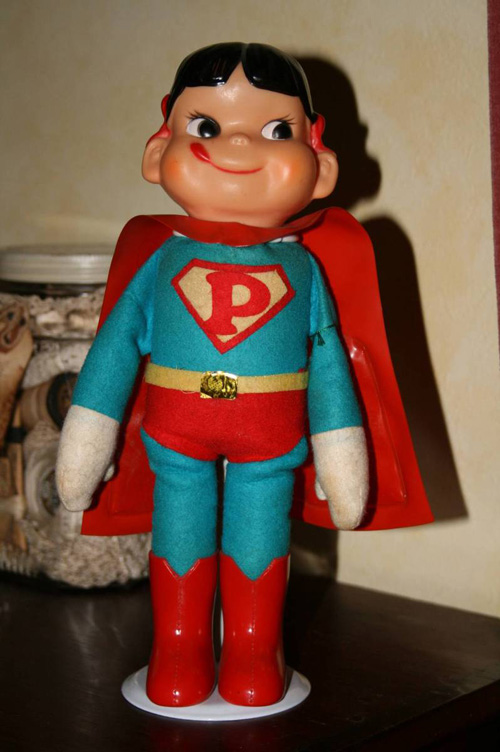 From the candy's earliest days, Peko and Poko statues were almost always found outside Fujiya stores, sporting a variety of outfits depending on the season or in honor of special holidays. This tradition continues today (and, sadly, these figures are stolen quite frequently). 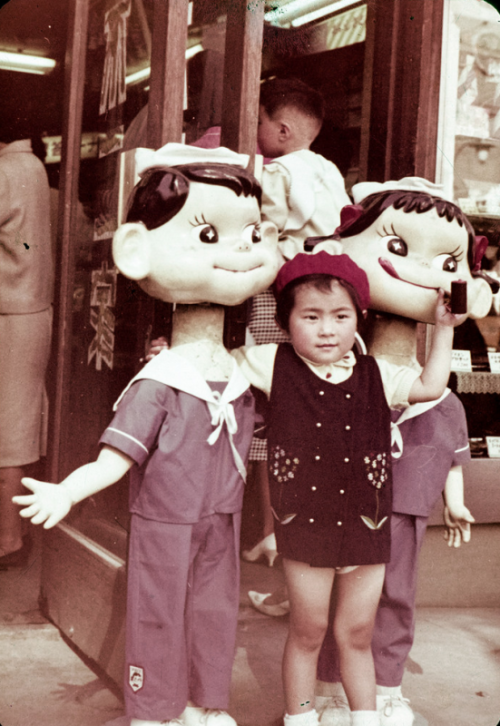 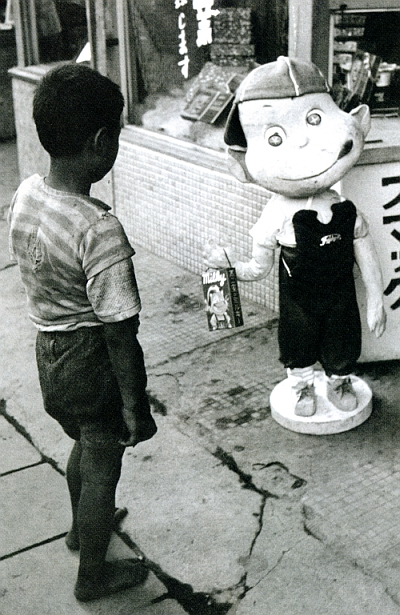 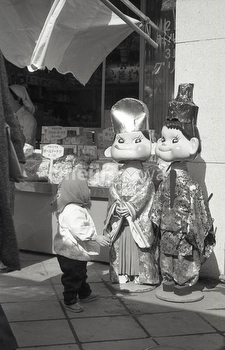 Here are some more modern examples. 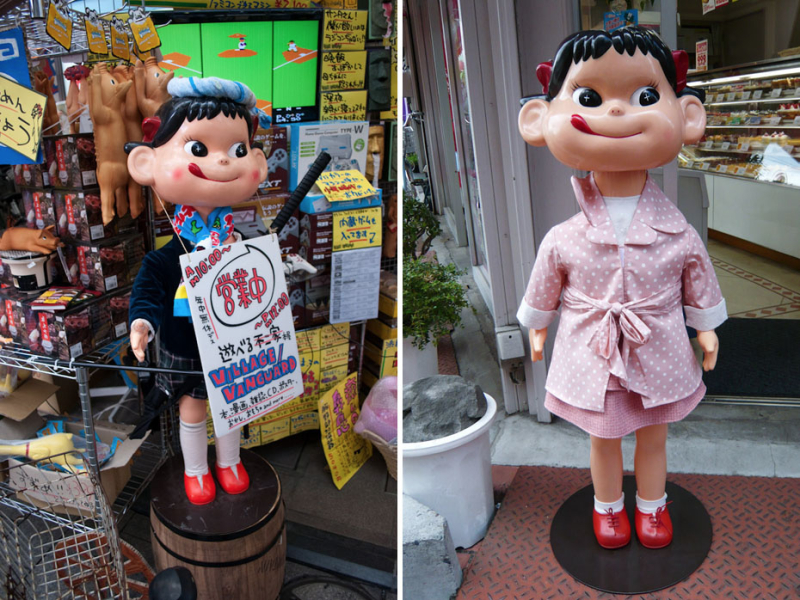 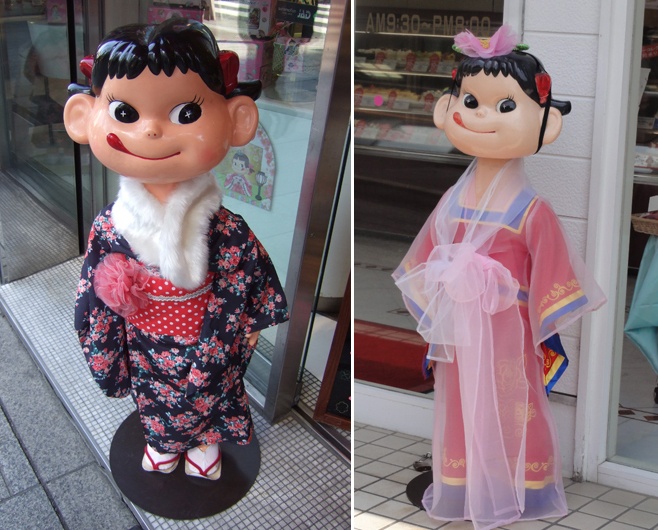 (images from ameblo.jp and jpvisitor.com) 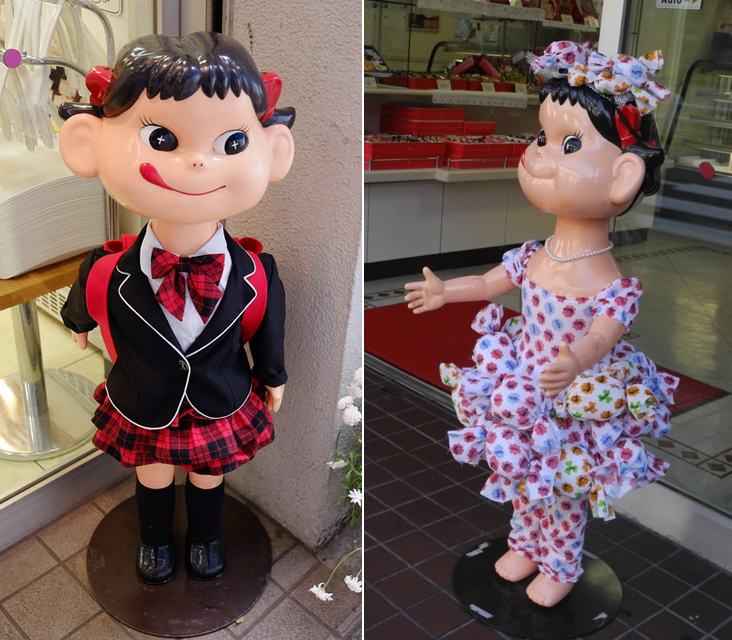 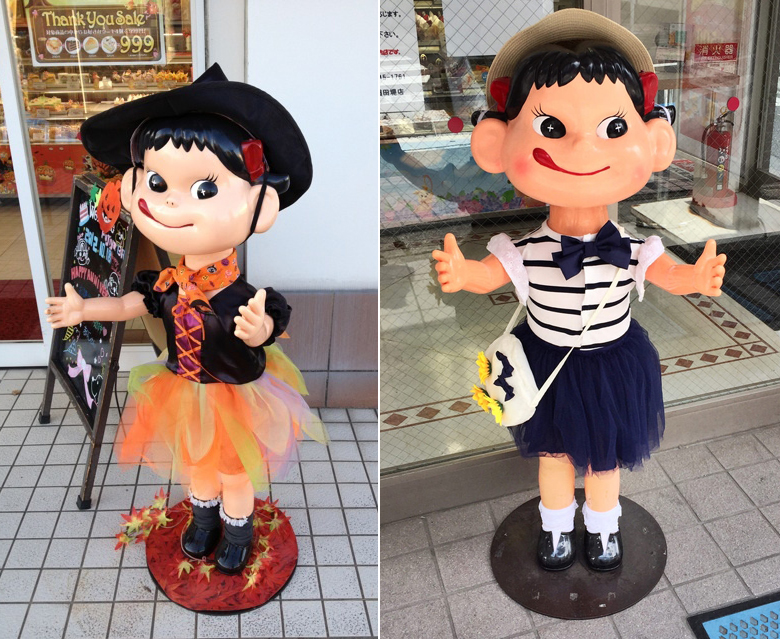 Of course I found the mermaid version! 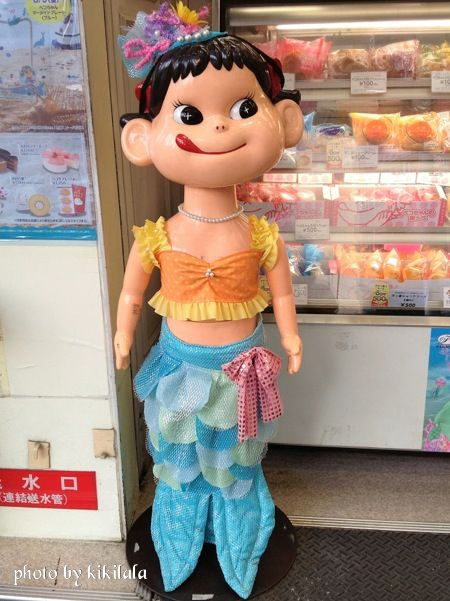 In 1961, American designer Raymond Loewy re-designed the Fujiya logo, and during that decade Peko occasionally sported the new design on her overalls.

Somewhere along the line, in an effort to make sure the character was recognizable despite all her different outfits, Fujiya created a set of rules for company designers to follow.  According to this blog:  "To standardize the look of Peko, the company created a rulebook on Peko, regulating facial expressions and poses of Peko. The rulebook is considered an important secret document of the company."  So while Peko has a seemingly infinite wardrobe and continues to evolve ever so slightly, you can always tell it's her.

I love these mini figurines, they remind me of the ones I had as a child.  (I'm dating myself here but does anyone remember Charmkins and Strawberry Shortcake figurines?  They were both scented, incidentally...my obsession with things that shouldn't necessary have fragrance obviously began at a young age.)  If I were a kid now I'd set out to collect each and every one. In 1995, Fujiya introduced "Dog" to join Peko and Poko.  I'm not quite sure what the point of this rather unimaginative character is.  Reminds me a bit of the addition of Poochie to Itchy and Scratchy in The Simpsons. 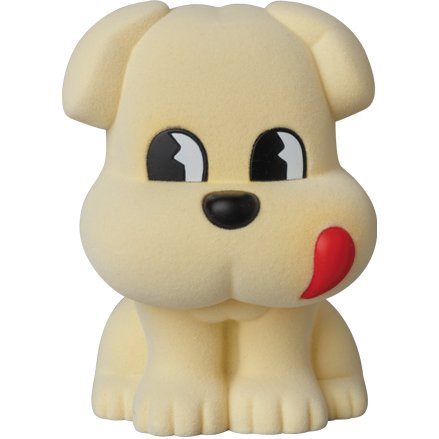 Anyway, like Gudetama, Peko-chan is the star of a staggering amount of merchandise.  You can find just about anything - from phone cases and pens to socks and poker chips - featuring Peko-chan.  There are also the wildly popular Nendoroid and Bearbrick figurines. 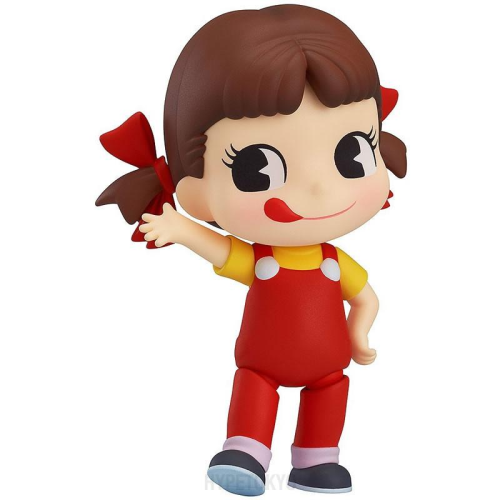 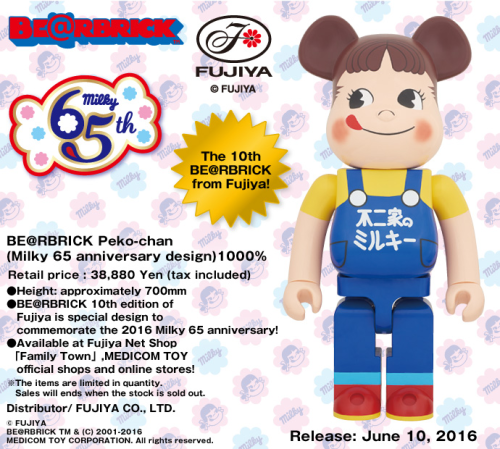 I'm particularly fond of the crossovers with other Japanese characters like Monchhchi and, of course, Gudetama. 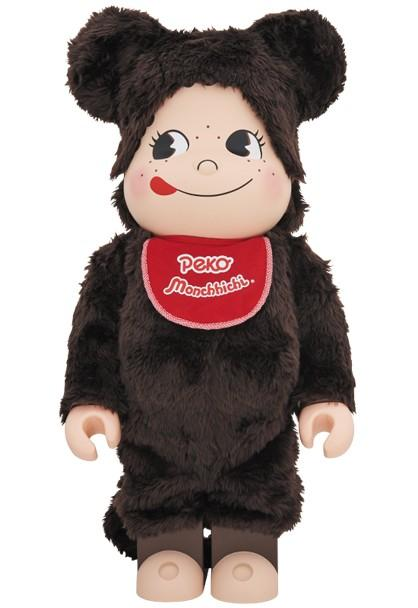 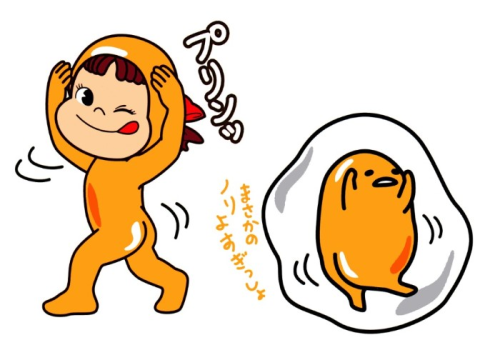 It's not surprising how much merch Peko appears on, given that she's as widely recognized in Japan as Ronald McDonald is in the U.S.  There was even a whole pop-up museum devoted to the character in late 2010 to celebrate her 50th anniversary. 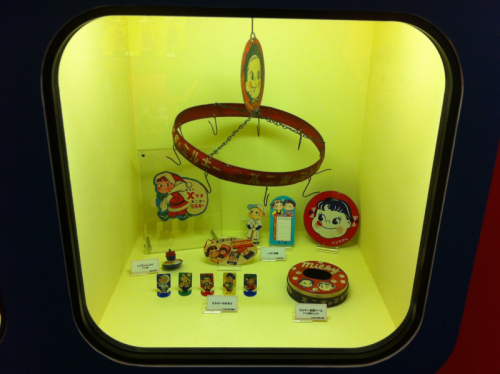 However, some claim there is a rather dark side to this seemingly harmless character.  Apparently there's an urban legend that's circulated for years claiming that Fujiya based Peko on a real-life child...who was also a cannibal.  Those cute little dots on Peko's cheeks?  They're not the innocent blush of childhood but her mother's blood.  As the story goes, during WWII there was a massive food shortage in Japan, and a mother and young daughter living in a small village (the father was off fighting the war) were literally starving.  The selfless mother cuts off a piece of flesh from her arm to feed her little girl.  And then:  "When Peko took her first bite of human flesh, she was amazed of how sweet the flesh tasted. She proceeded to kill her mother and eat her entire body. Peko continued her life as a cannibal.  They say that the reason why her tongue is always out is because she's licking her mother's blood off her cheeks. The name of the candy is 'Milky', but when you rearrange the sounds, it becomes 'Kill Me', which were her mother's final words. That's why the slogan of the company, when translated from Japanese is, 'Milky tastes like Mama'".  Um, that's pretty disturbing.  Unfortunately Poko is also part of this very macabre tale.  "After devouring her mother, Peko-chan was still hungry. She attacked Poko, breaking open his skull in order to eat his brain. Poco was in such pain that he committed suicide by biting off his own tongue and swallowing it.  They say that the reason why Poco-chan never has his tongue out in the pictures is because he doesn't have one, and the reason why he always wears a blue hat is to hide his broken skull and exposed brain." Yikes. 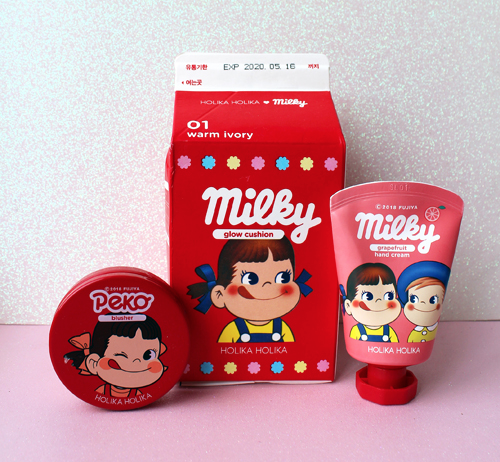 In looking at this collection again, I think I'm going to put the Holika Holika stuff in our off-site storage space because right now I'm a little freaked out and kind of don't want it in the house.  I don't really believe this story is the basis for Fujiya's Milky mascots - I maintain they were meant to be totally innocuous and cute characters for children, and the gruesome tale is just one of those stupid fake stories from the internet's nascent days - but it's creepy nevertheless, especially when some of the early versions of Peko and Poko were downright terrifying.  I'm wondering if, over the years, Fujiya made a deliberate attempt to show Poko without his hat to defuse these rumors. 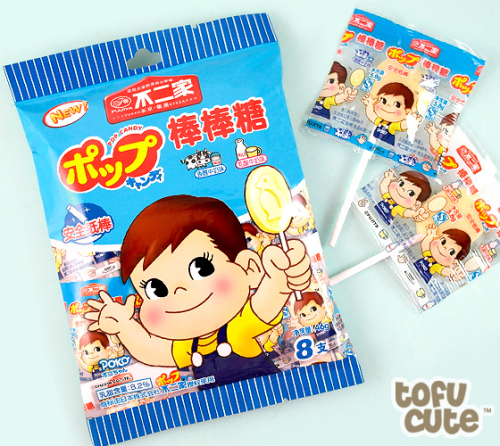 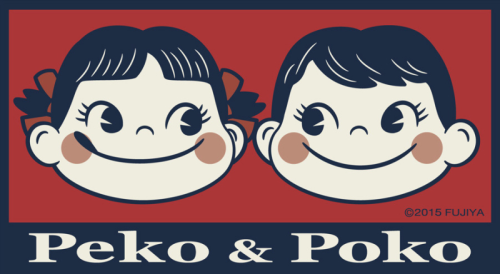 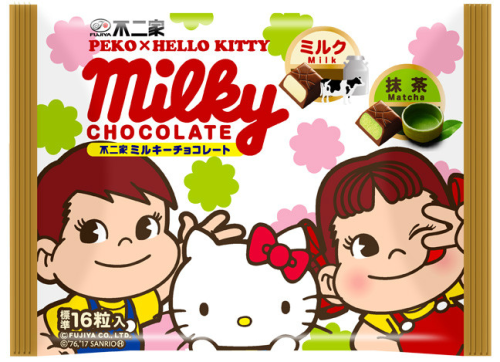 Anyway, scary urban legends aside, I'm pleased to see such a well-loved mascot on a makeup collection.  As with Gudetama, I'm still scratching my head as to why a Korean brand is presenting this collaboration rather than a Japanese company, but I guess it's good there's a makeup representation at all.  I just wish there were more versions of Peko as there were with the Gudetama collection.  While the Peko collection was huge, it didn't reflect many variations of the character.  I would have loved to see (non-creepy) vintage iterations or a depiction of Peko and Poko playing with makeup.  It's basically the exact same packaging as the candy, which is cute, but they could have done a little more.  Then again, I might have ended up buying almost all of it the way I did with Gudetama, which is not great for the Museum's budget.