This was another one of those "buy first, ask questions later" type of purchases.  As soon as I saw the images I knew this collection belonged in the Museum, even though I had no idea who or what Nicopanda was.  Turns out, Nicopanda is a streetwear line founded by designer Nicola Formichetti in 2011.  I'll talk more about the brand in a bit, but first, let's feast our eyes on the positively adorable packaging. 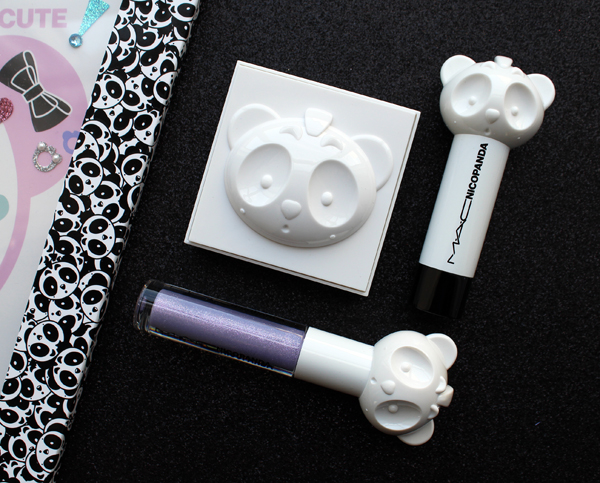 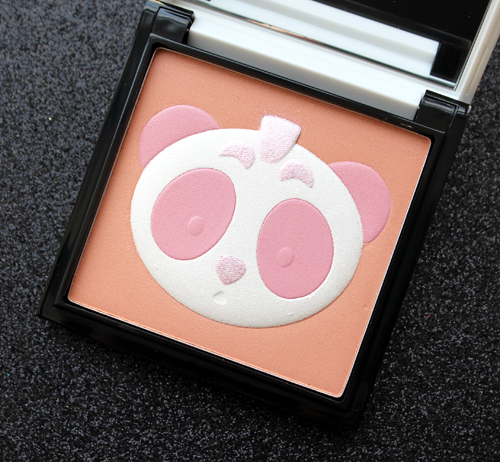 In keeping with the brand's spirit, I picked up what I thought were the most fun lip colors. 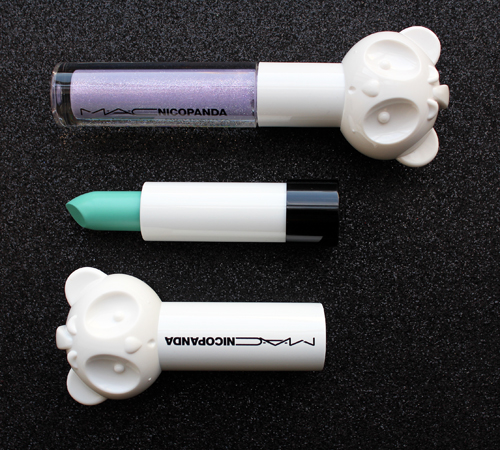 Even the boxes are precious.   You know how much I appreciate patterns on both the inside and outside! 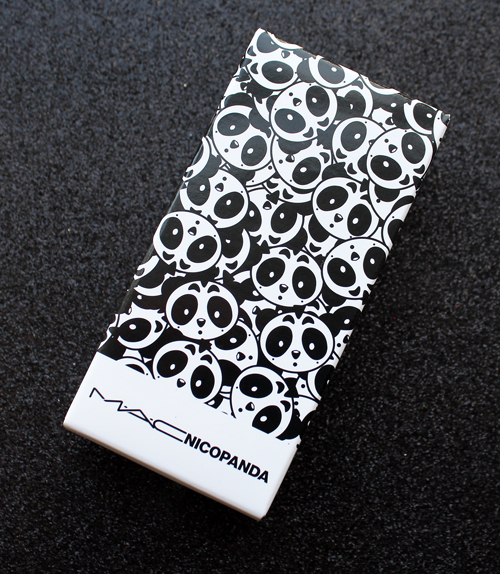 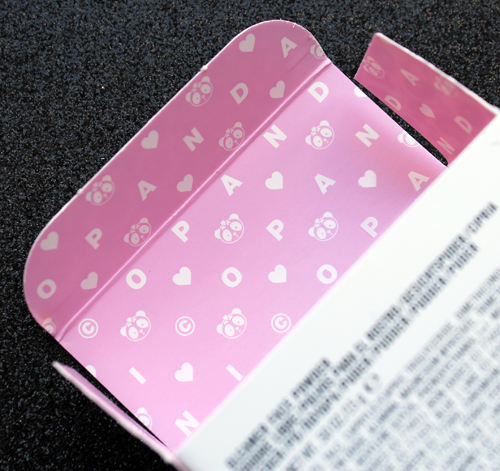 I normally would have gone for a palette rather than face stickers, but these were apparently Formichetti's favorite item in the collection, and when I thought about it a little bit, it occurred to me that they were the most representative of Nicopanda's vibe. 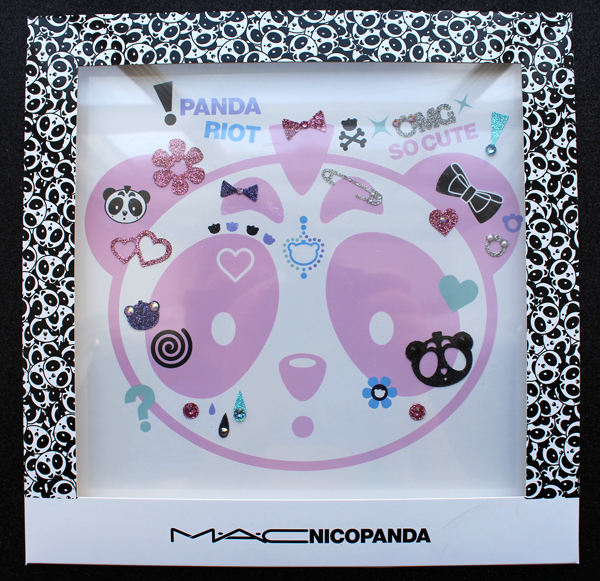 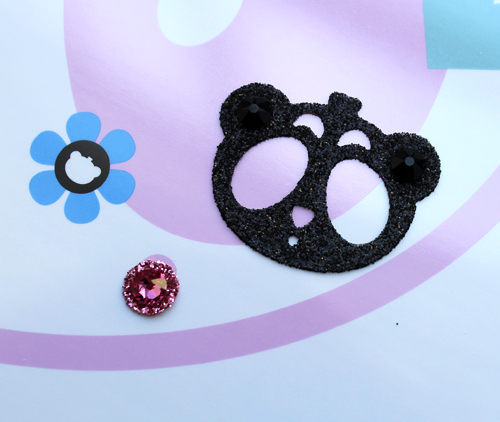 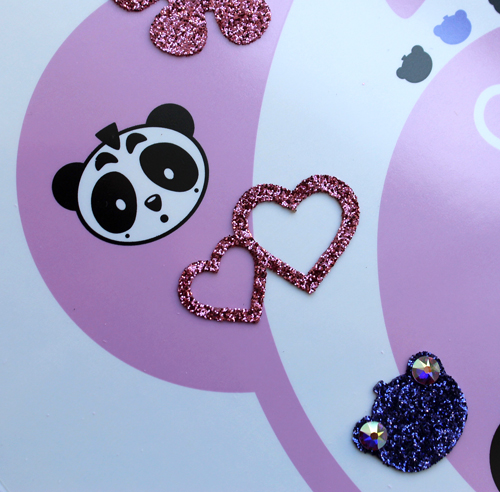 The panda design on the MAC collection, obviously, is a replica of the panda mascot in the Nicopanda clothing line.  Formichetti notes that it was imperative to incorporate the panda motif in a big way - as with the Jeremy Scott collection, custom molds for the packaging were required, and Formichetti sees the final designs "almost like a collectible".  As we'll see shortly, the the Nicopanda symbol holds a lot of meaning for the designer.  "Ultimately, the panda was a big part of this inspiration. I originally created this character to represent something that is a symbol of creativity and diversity. It was very important to bring the panda into the design and creative process. The packaging is clearly inspired by the panda, which is custom made and the first time MAC has launched something like this. It’s visually so exciting, elegant, fun, unisex, and everything we wanted to accomplish."

Now that we've seen a bit of the MAC collection, let's get down to the what, how and why.  The Nicopanda brand began as a pop-up store in 2011. as a side project of Nicola Formichetti and his brother Andrea.  Nicola was working as a stylist to the ever-eccentric Lady Gaga at the time (and became creative director for Diesel a few years later), and due to its overwhelming popularity the line expanded to become a full-time endeavor by 2015.  As for the panda moniker, Formichetti explains:  "My friends used to call me Nico Panda because I’m half Asian, I had this long beard back then; and was a little chubby, so I looked like a bear—an Asian bear. So people started calling me Nico Panda on Twitter, and then once Gaga did that panda makeup, I created this character for the store."

Nicopanda was born out of Formichetti's desire to both explore his Japanese roots and create a unique, light-hearted streetwear line that's also genderless.  "It's our job to provide as many options as possible for people to choose from so they can be whatever and whoever they want to be," he stated.  "We should have unisex garments.1  But, we also have to have more feminine and more masculine clothing because there are times when you'll want dress more masculine, more girly or in between."  As you can see from recent collections, Nicopanda definitely appears to be a pioneer in genderless dressing.  Not only is the clothing intended for all genders, the casting of androgynous models furthers the notion of a future without gender labels.  I have to say I like the concept of readily accessible clothing that's not intended for men or women.  Wouldn't it be fun to go into a store, see an item you like and buy it without worrying it's the "wrong" gender for you?  I mean, if I like a piece of menswear I'll buy it, but there's a great sense of freedom in buying non-gender specific clothing. 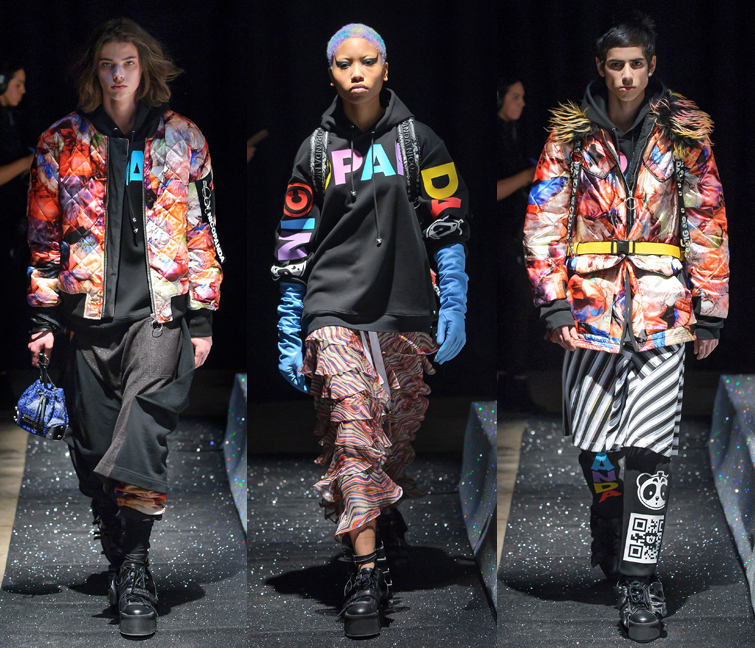 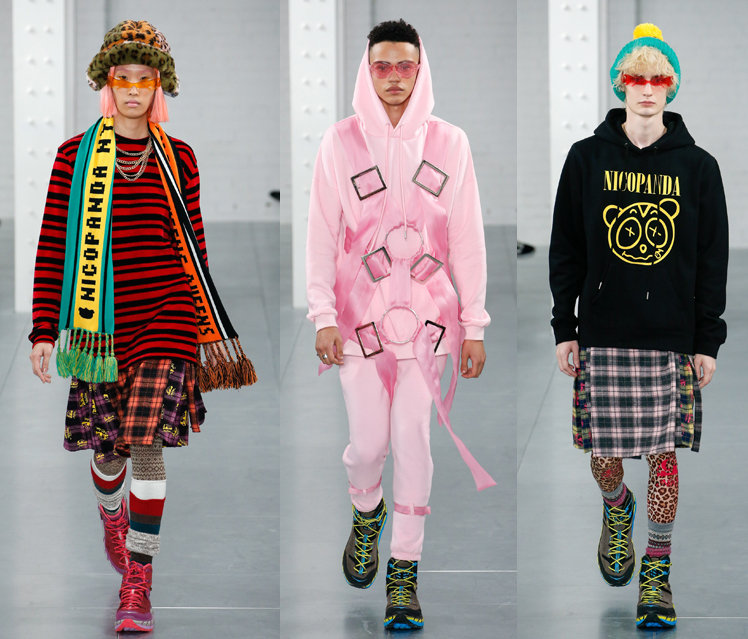 Another way Formichetti is turning the notion of gendered clothing on its head is the use of traditional markers of femininity - pink, ruffles, skirt silhouettes - on ostensibly male models.  The point Formichetti seems to make isn't men embracing their feminine side, but rather wanting to create styles that anyone would feel comfortable wearing if they chose. 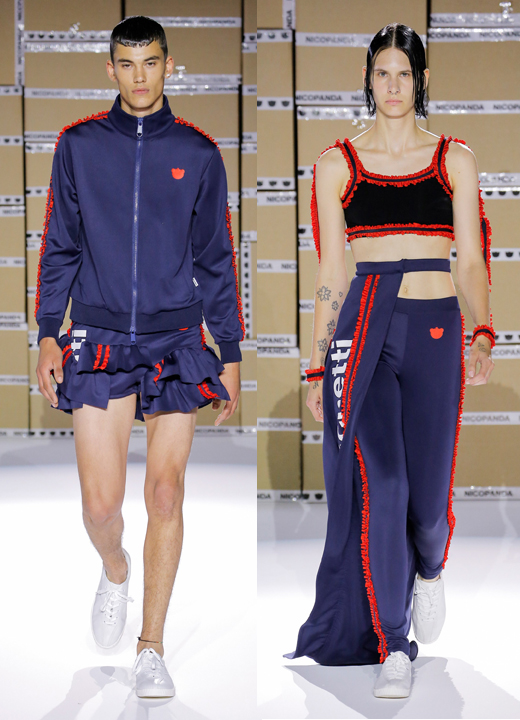 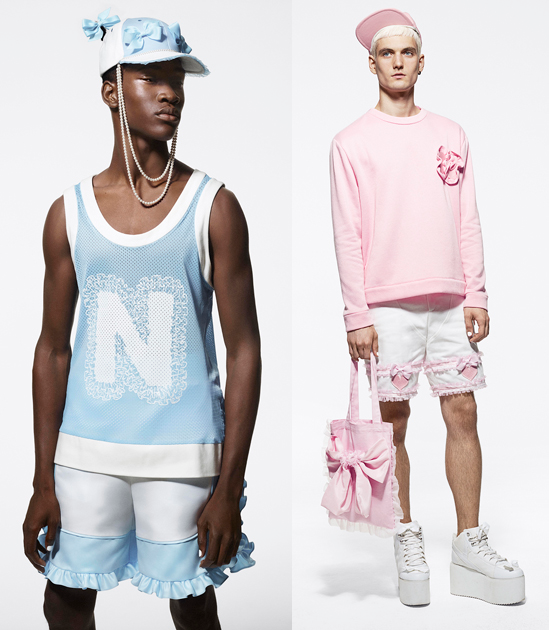 Obviously, the topic of genderless clothing is far beyond the scope of this post, but I want to look at how Nicopanda applied the concept to makeup.  In the video below, he stresses that the MAC collection is for everyone:  "I made this collection for everybody - girls, boys, and then everyone in between...I think it's very genderless and freestyle...diversity and inclusivity are part of everything I do and Nicopanda does."

Indeed, most of the models in the ads defy gender and even race.  Diversity and playing with opposites were central to Formichetti's vision for the MAC collection, since they are also tenets of the Nicopanda brand.  "The inspiration for me was to create something that was new and different and focuses on creativity and diversity all while being playful and fun. That’s kind of the inspiration for everything I do. I wanted to create something that was personal to my brand and something that was special to celebrate my longstanding relationship with MAC.  Together, we desired to develop something fresh, new, and contemporary for this new generation of makeup users. I’m half Asian and half European so it was important to me that this collection delivered a little bit of east and a little west. There’s a touch of street culture and high fashion.  The theme was diversity. To create something that was very feminine but also masculine. For the packaging, we wanted this to show polar opposite colors that worked together just like a panda. I love bringing together opposites - you can even see that in the packaging - contrasting the white and black. Nicopanda brings together high-fashion and streetwear just like this make-up collaboration." 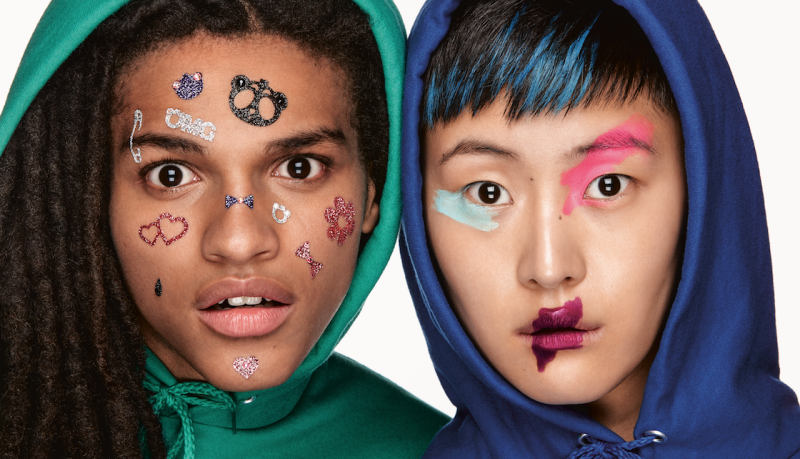 As for the makeup in the ads, it seems Formichetti's insistence on creativity may not have resonated with everyone.  Many expressed the opinion that the application resembled a toddler's finger paint (you MUST check out Karen's hilarious take on this over at Makeup and Beauty Blog), while some were genuinely confused. 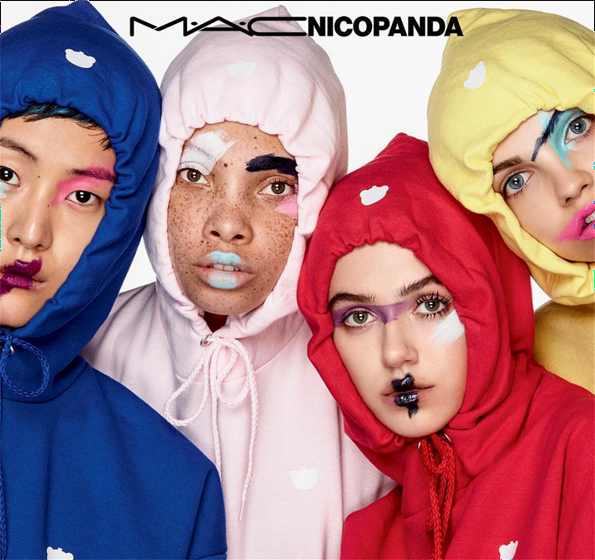 While I personally admire the very avant-garde application, I'm inclined to say that these sorts of looks aren't as wearable as Formichetti intended.  He says that there is something for everyone, and that non-traditional shades are in fact versatile:  "With the actual products, I desired to create something that could go from day to night. Something that was fun and funky for the person who wants to take their makeup to the next level, but something that also works for someone who wears minimal makeup. The mix of colors is so couture.  I wanted to use non-traditional colors that are really popular with my Nicopanda crew - all the colour palettes for lips, eyes, and cheeks are very wearable and absolutely fabulous."  I don't know about you, but I'm definitely not seeing this in the ads or even in the makeup itself.  For the most part the colors skew bright - there's nary a neutral to be found, save, perhaps, for the face powder.  Again, I have no issue with this, as my love for so-called weird colors and non-traditional application knows no bounds, but it seems rather disingenuous to claim the collection is easily wearable when at the same time promoting solely unusual looks.  Traditional application is entirely left out of the official ads; MAC encourages customers to "let out your inner weirdo" and "never stop breaking the rules". 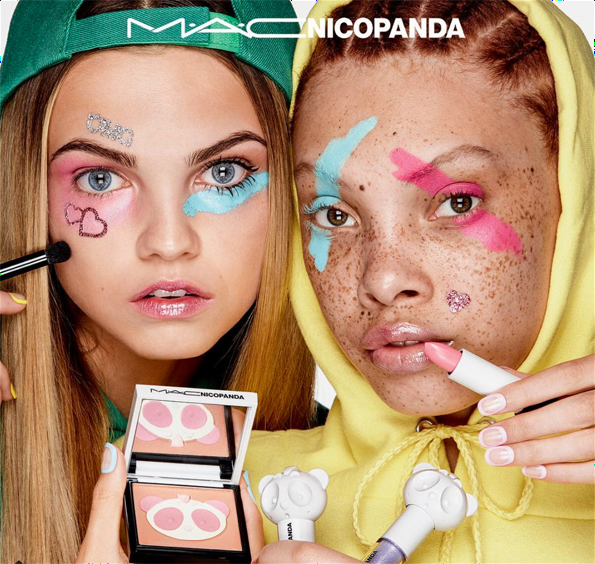 I feel as though Formichetti can't disguise his penchant for "crazy" makeup colors and application, and he shouldn't have brought up the issue of wearability with the MAC collection.  I would have expected nothing less than totally out-there makeup, given previous looks from his runway shows.  The MAC collection is absolutely an extension of the Nicopanda aesthetic, and I don't think Formichetti should have tried to promote versatility as a selling point because that's clearly not what he's about.  As my mother would say, a leopard can't change its spots. 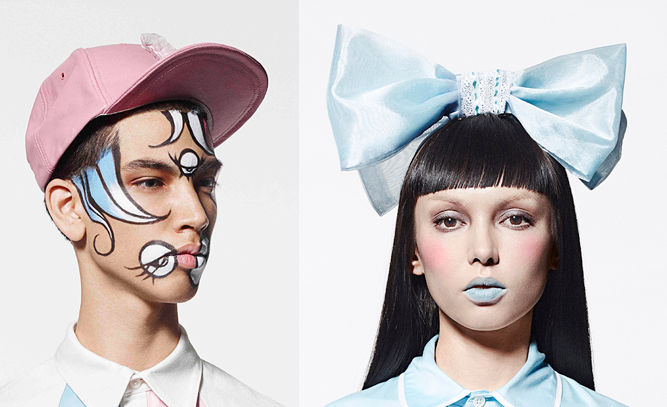 (images from vogue and voltcafe.com)

There is also the issue of claiming diversity when there's not a single model over the age of 25.  Perhaps in terms of gender and race Formichetti nailed diversity, but let's be honest, he clearly wasn't making face stickers with people my age in mind.  In explaining how the MAC collaboration came to be, Formichetti notes that a more youthful demographic is the key focus for Nicopanda.  "Nicopanda is about youth — the new generation. The brand is always about trying new things, sharing and creating new ideas, so I wanted to tackle the beauty world with Nicopanda. A cosmetics collaboration with MAC is a natural partnership...I’ve been collaborating with MAC for a long time, working on their campaigns and projects for years...it was a natural progression to create product together with Nicopanda. They are like family, and we really trust each other."  In the earlier video interview, he states that his vision and MAC's are similar due to their interest in spurring creativity, but also because of their "work with young talent."  While MAC and Nicopanda are a great match for the most part, Formichetti seems to have left out the "all ages" part of MAC's 3-phrase tagline.  Once again, I wouldn't mind so much if he didn't claim otherwise - if you want to make a collection for the teens and 20-something crowd, that's fine, but don't insinuate that it's the epitome of diversity because it's not. Formichetti maintains he's talking about the "young at heart" when discussing his customers.  "The Nicopanda customer for me is someone who wants to play and isn’t scared of trying new things. I desired to give them the materials to inspire their creativity and encourage that playfulness. My consumers don’t take things too seriously and are super young-spirited. Not necessarily in age, but they exude a young energy. This collection is so in sync with that; sophisticated yet light-hearted."  I still say the ads tell a slightly different story.

Overall, I applaud Formichetti for breaking gender barriers in fashion, and making it affordable to boot.  I love the concept of Nicopanda and MAC was an excellent match for a cosmetics line.  I only wish Formichetti would have insisted on including a few older faces and some more traditional looks for the campaign, or left diversity out of the conversation all together.  The models in the ads were certainly varied in race and gender and the makeup looks felt fresh and modern, but the lack of models in their 30s and up, along with the presentation of solely non-traditional makeup application, directly contradicts Formichetti's stance that this was a collection meant for everyone and could be worn in more traditional ways.  Nevertheless I'm willing to overlook it in this case because that panda packaging is simply too cute and unique.

1I must point out that genderless is not equal to unisex.  This article explains why.