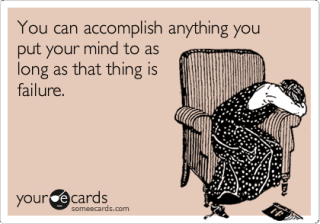 (This will be a long and whiny post.  Feel free to skip it.)

I've been wanting to write this post for a while and I figured what better day than New Year's, a.k.a. the most depressing day of the year.  The Museum plan for 2018 is that there is no plan.  The only thing I intend to do is continue posting up until the Museum's 10-year anniversary in August, when hopefully I will have come to a decision as to whether to keep going or end this sad endeavor.  Both 2017 and 2016 have been a nonstop cycle of Museum-related stress, frustration and rejection.  I haven't shared any of these failures because there have been so many and because I don't want to come across as negative, but I can't hold it in any longer.  I took all the opportunities that were offered to me and undertook my own efforts to try to improve the Museum in terms of research, visibility and organization as well as trying to make it a physical space or at least get an exhibition, all of which ended with the proverbial door getting slammed in my face.

Social Media
As much as I enjoyed blogging and Instagram, recently they've been killing me.  Whether I'm losing sleep over people unfollowing me, or the fact that I've been on Instagram a year and a half and still haven't reached a measly 1,000 followers, or that it takes me 1-2 hours at a minimum to set up and take a photo I consider decent enough to post, it's been less than fun lately.  A few weeks back in December all I wanted to do was run a 5 mile race and hit up the Charm City Craft Mafia's annual holiday show.  Instead that Saturday was spent taking hundreds of photos for both the blog and Instagram.  I never seem to have time for any of my other hobbies anymore.  This is especially troubling when I see people with, to be blunt, downright shitty photos having thousands of followers.  Ditto for poorly written blogs - I see how many readers they have in Feedly compared to mine (I currently have a whopping 58 readers, down from 59 in early 2017) - and it seems people who can't even spell properly have hundreds of readers.  I might pretend that the blog and Instagram are more for me than anyone else, but if I'm being honest, I'm sick of talking to myself.  It's disheartening to put so much time and effort into both when I get basically nothing in return.  I feel like I'm standing on a table in the middle of a crowded room shouting through a bullhorn and no one hears a damn thing.

Research
I have tried my best to really step up the research on vintage items and make my posts on contemporary items more scholarly and academic.  What I discovered is that: 1. Baltimore's public libraries suck; 2. the library at the university where I work doesn't have anything I need; 3.  Hopkins' library is good for art history but they want $200 a year for access and they don't have the magazine archives I'm after; 4.  The New York Public Library has both Vogue and WWD archives and does allow out-of-state residents to get a library card, but you have to go up there in person to get it and then renew it every 3 months (again, in person).  Despite these obstacles I was all excited until I realized that both of these much-needed resources are only accessible from a branch, i.e., even though I hauled my ass up there to get a card, I can't access those from here.  And both of those require an exorbitant amount of money to subscribe. 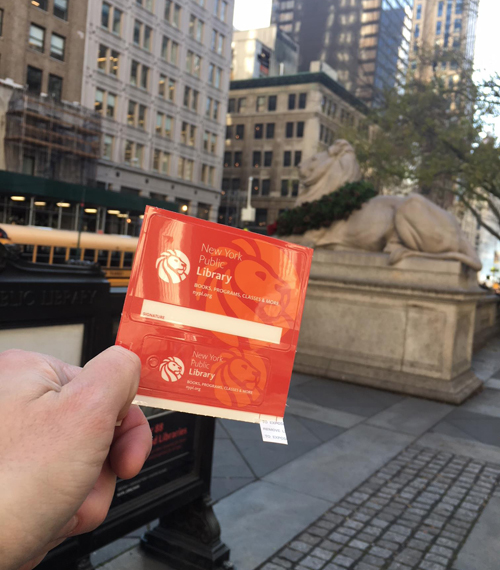 So much for this.

Website/books/exhibitions
Along those lines, I can't upgrade to a proper museum website or publish any of the tons of books I've had rattling around in my head for years, because I am not independently wealthy.  A coffee table book wouldn't require much heavy-duty research, but as it's mostly eye candy I'd need to hire a professional photographer.  Same with digitizing the Museum's collection.  I'd need a pro to take photos and for a professional redesign of the website, it would cost thousands.  Yes, I've actually priced it out - I live with a designer who does this for a living, for god's sake.  As for my own exhibitions, I have so many ideas that go beyond the very basic themes I normally cover.  Forest creatures and rainbows are nice, but not complex like some others I'd love to do if I had access to better resources.

Other Exhibitions and Museums (or, so many fails I had to number them)
1. In March 2016 the director of a major university library contacted me and asked about starting a real cosmetics museum together.  She'd handle the business end and I'd do all the curating, and I could do it remotely so I wouldn't have to up and move to the small town she was proposing it would be.  She had a lovely old warehouse space picked out and everything, we made tons of plans and I really thought my dream would be a reality.  After several months of emailing and phone calls she proposed visiting me in Baltimore so I could, in her words, "make sure she wasn't an axe murderer" (and obviously she needed to size me up too).  In June 2016 we had a very nice dinner during which we continued discussing plans.  I thought it went well, and then...nothing.  Radio silence for 3 months, at which point I followed up and asked if everything was okay.  She explained that her old house hadn't sold and she needed that cash to buy the space where we were going to put the museum, but that if anything changed she'd let me know.  This was in September 2016.  I have not heard hide nor hair from her since.  So yeah, being - what's the term the kids use these days?  Ghosted? - by this person was truly upsetting, especially since it seemed to have occurred immediately following our in-person meeting.  To this day I still wonder what about me in person was so off-putting that she abandoned the project.

2. I emailed Makeup in New York about whether they'd have an exhibition of vintage beauty items, something I've been going to see the past few years.  I was told that they would not be having one at their 2017 show, so I gathered my courage and boldly offered to help organize/curate one in the future.  This was the response I received.

Am I being too sensitive or was that stone cold?  Why wouldn't you at least entertain the notion of someone with nearly a decade of makeup exhibition experience helping to curate one at an expo?  I realize the exhibitions I organize are just in my home, but give me a gallery space and I'd hit it out of the park.  I'm one of a handful of people on the entire planet who has actively, thoughtfully considered beauty exhibitions and would know what people want to see and how to go about organizing it.  You would think they'd be interested in having my help, but no.

3.  At least I received a response from them.  Esteé Lauder continues to ignore my requests for information about their archives...but they are more than happy to have "social media influencers" have access to them. 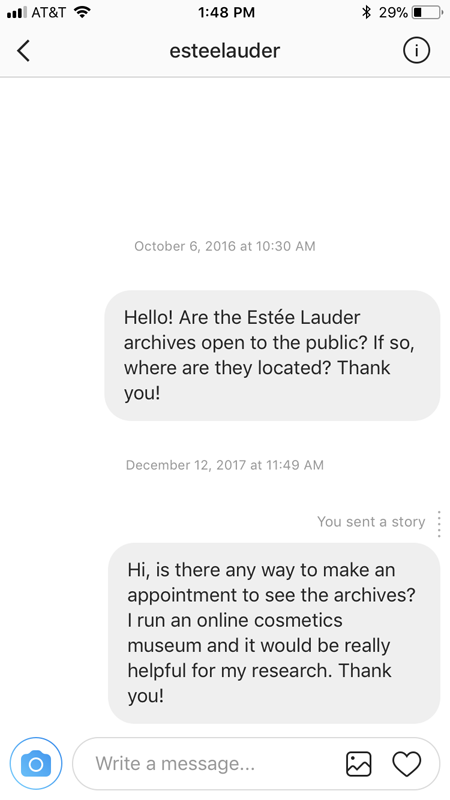 Ignoring me for over a year.

4. Finally, there's this exhibition.  Normally I'm thrilled to see other makeup exhibitions, but this one has broken me since it's one I genuinely could have helped with.  I was asked to lend some objects for it, but that's where my involvement ends, and for that I am crushed.  I just can't figure out why, again, someone with nearly a decade of experience planning and executing exhibitions devoted to makeup is brushed off (yes, I offered to assist in any other way besides object-lending capacity and was rejected.  They were very polite about it, at least.)  I know no one is going to hand me an opportunity to guest curate on a silver platter and that people need to take ownership of their exhibitions - I'd never ask to co-curate because I understand it's THEIR exhibition - but it would have been nice to be asked to do a little consultation on what they were planning.  Again, I'm one of the few people on earth who has spent years thinking about how to curate makeup exhibitions.  I'm certainly not saying the grad students organizing this are incapable of curating a great makeup exhibition, as some of them work for well-known galleries so I'm sure it'll be good and I'm definitely going to go see it.  I'm just saying that my insight might have been as helpful as gallery experience.  The other thing that's upsetting is that an exhibition in a physical gallery space is something I've worked so hard to achieve for years, and along comes this one, which was organized in a matter of months.  I bet they had no trouble getting cosmetics companies to reply to them about borrowing objects from their archives or accessing other historical resources.

To sum up, I'm just really tired.  Tired of spending every spare minute and drop of energy on something no one's interested in, tired of being told no, tired of not being taken seriously. Most of all I'm tired of the "you're responsible for your own destiny/happiness" bullshit because it's simply not true.  People don't seem to understand there's a fair amount of luck and connections involved in making dreams a reality.  I have been doing everything humanly possible to improve the blog and make the Museum "real" and have been stonewalled every step of the way, while others (some of whom I think are less deserving) are met with nothing but success due to dumb luck or because of who they know.  It's just history repeating itself; I was shut out of the museum world and academia at a young age, and I had originally conceived of the Museum/blog as outlets to help me deal with my shattered career dreams.  If museums and universities didn't want me then I'd forge my own path and make my own opportunities.  Instead it's the same old thing.

Thank you for reading and apologies for being bitter and entitled, but that's just where I am right now and had to get it off my chest.  I am grateful for the few of you that continue to support the Museum and I hope 2018 has good things in store for you.