Based on an informal poll I conducted on Instagram, the overwhelming majority of people who answered (92%) indicated that although the holidays are over, it's still acceptable for me to continue blogging about holiday collections throughout the winter.  Consider this one on LM Ladurée's beautiful holiday 2017 the first in a series of holiday catch-up posts. :)

The collection seems to be loosely based on the idea of a masquerade ball, a theme popular among many beauty collections that stretches back decades.  As the Bal Masqué in cosmetics could be another entire post, I'm choosing to focus on the most prominent motif of the Ladurée collection:  the fan.  It appears at the bottom of this printed bag used to contain body wash, lotion and hand cream, with a young lady coquettishly peeking out from the edges. 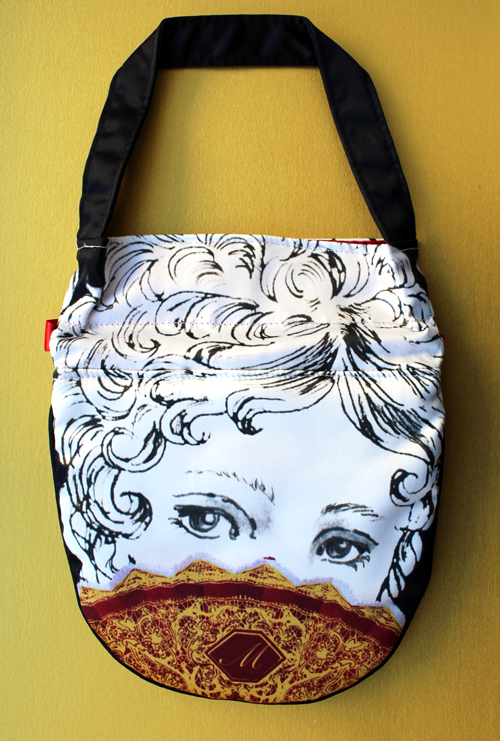 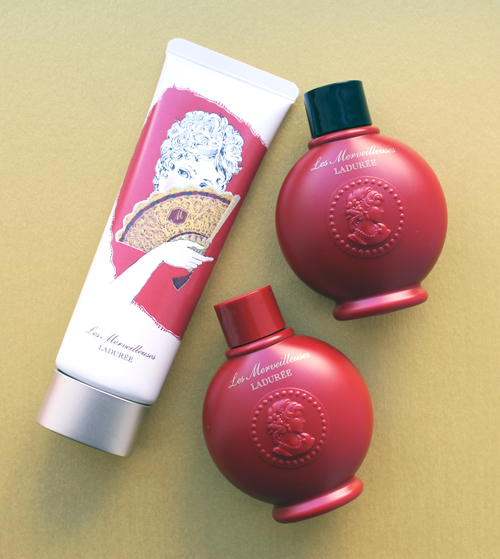 Along with the black cap and shoe, the fan differentiated the leg-shaped lip glosses from last year's version.  I still say they're one of the weirdest makeup items I've come across. 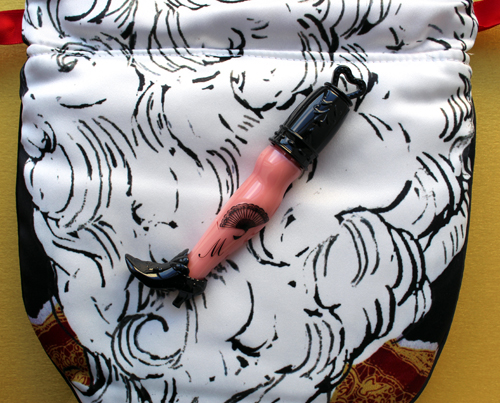 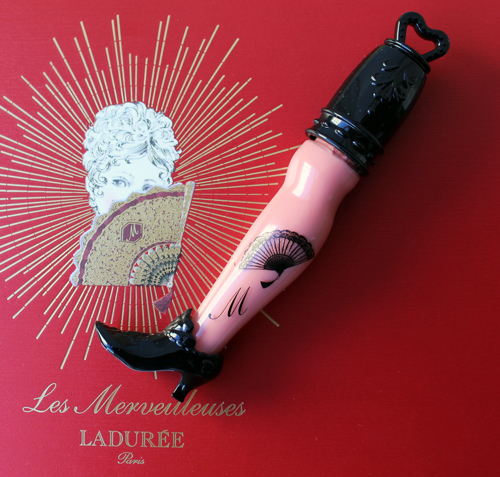 The fan also appeared on the side of this face powder box. 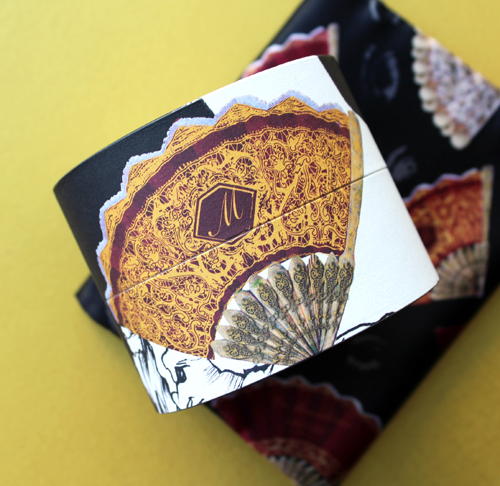 The box's top is adorned with a masked woman who shyly looks down and also at us, depending on the angle.  This packaging technique was a definitely a trend in 2017, with both MAC's Rossi de Palma and Smashbox's holiday collection featuring a sort of shape-shifting design. But the standout use of the motif came in the form of a fan-shaped compact, which contains blush and highlighter embossed with a delicate lace pattern.  The compact's silky pouch features several elaborate fan designs, along with pairs of eyes shown both closed and peering out from the black background, lending an air of mystery.  The rich red tassel hanging from the fan's base adds vibrant color and a touch of movement. 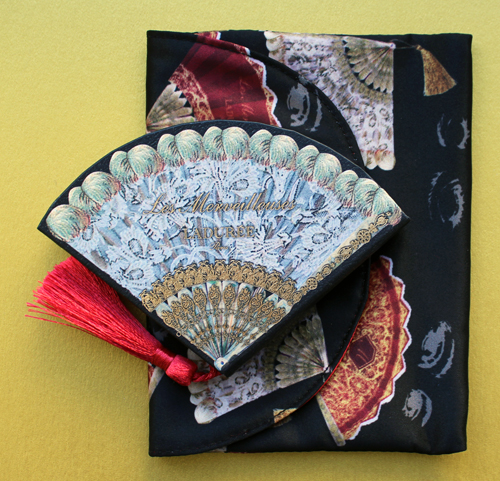 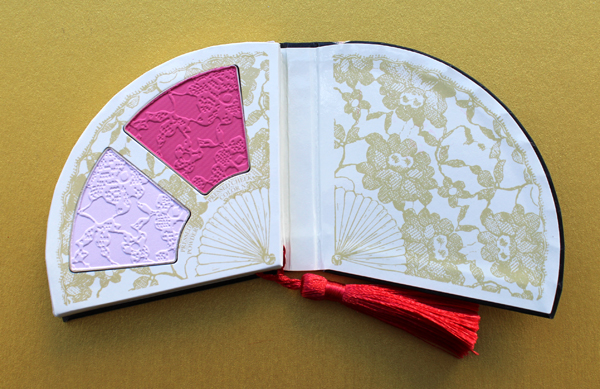 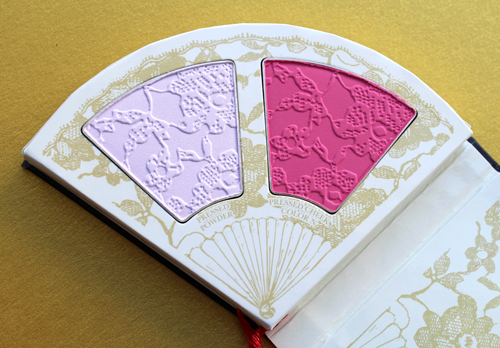 As with the lyre motif from their fall 2017 collection, I suspect LM Ladurée was inspired by the fashion of Les Merveilleuses as well as vintage compacts.  Let's take a peek at the stylish ladies of the Empire era in France (roughly 1795-1815).  The history of the fan as accessory in Europe is far beyond the scope of this little blog, especially since there is such a tremendous wealth of resources on the subject, but I'd like to share a few examples of fans during the time of Les Merveilleuses. As you can see from these fashion plates, the fan was de rigueur.  Here are just a few of the literally dozens of plates I found from this time period depicting women holding fans of all shapes and colors. 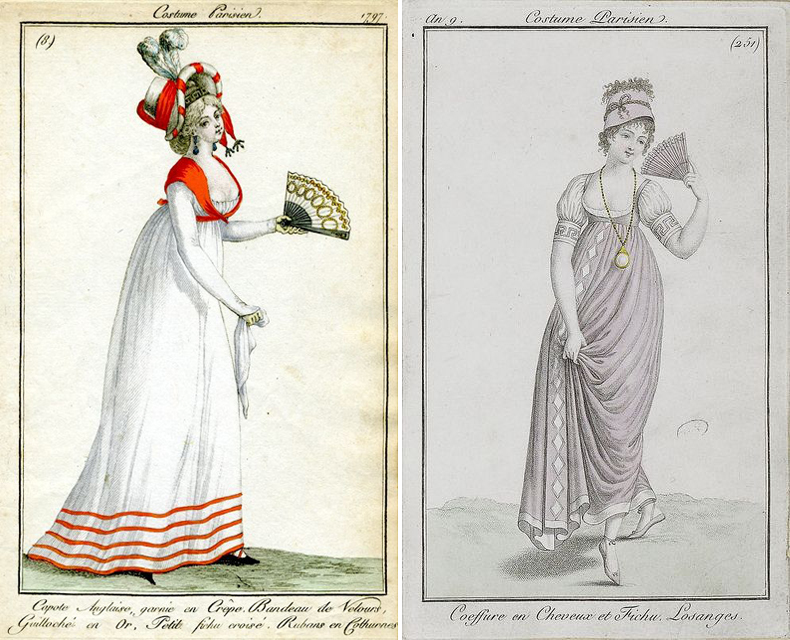 I'm no fashion historian, but it seems that fans were made to accommodate a variety of events and different hours of the day, given the ornate one shown with a wedding dress (left) and one meant to be carried with a more informal day dress (right). 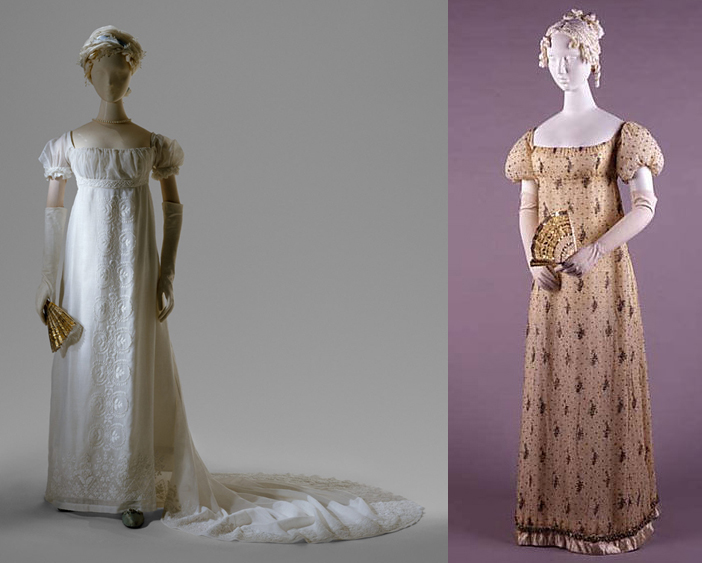 Some examples of fans carried during the late 1700s-early 1800s were included in the wonderful exhibition "Napoleon and the Empire of Fashion."  The fact that the image of a woman holding a fan was chosen for the front cover of the exhibition catalogue demonstrates that the accessory was indeed a must-have, at least for certain occasions.  While the fan was certainly popular before this time and continued to be ubiquitous until the early 1900s, the accessory seems to have reached the height of fandom (sorry, couldn't help it) in the Empire era. 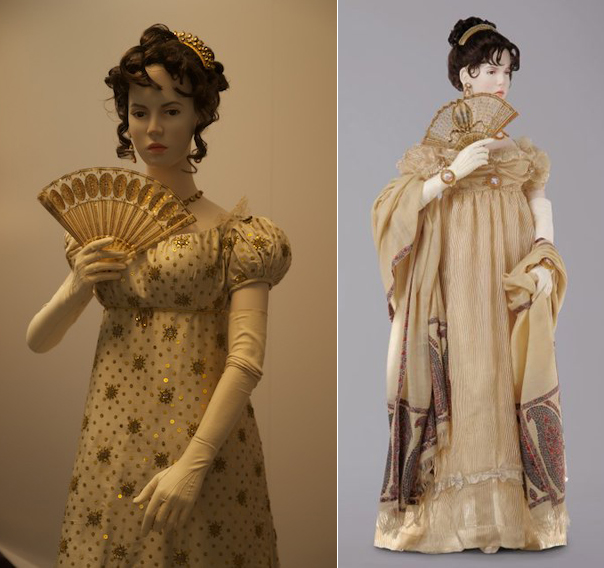 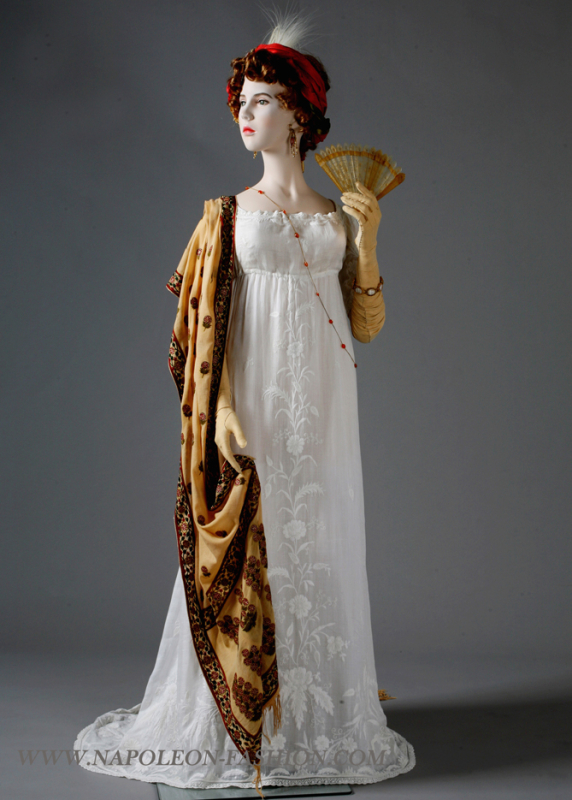 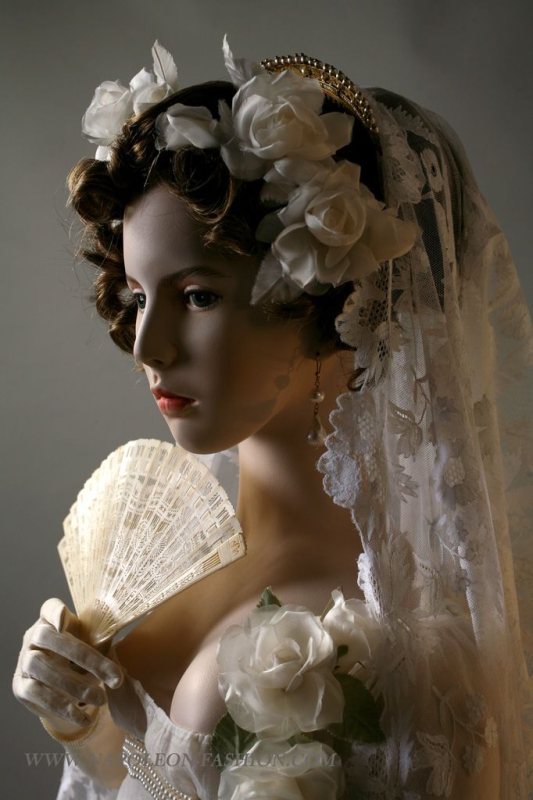 I'm pretty sure these sorts of images were what inspired LM Ladurée to go with the fan motif.  But I wonder, as with previous releases, whether they were also looking at vintage compacts.  Fan-shaped compacts aren't new; in fact, as we'll see, they're over 70 years old.  Over the years the fan shape has been utilized for makeup mirrors and to hold perfume...as well as some rather unfortunate-looking (read: ugly) makeup compacts from Maybelline in the late '80s.  I've included the ads for these abominations solely for your amusement. Even though they're in black and white, I can see in my head crystal clear how cheap and tacky these compacts would look in person. 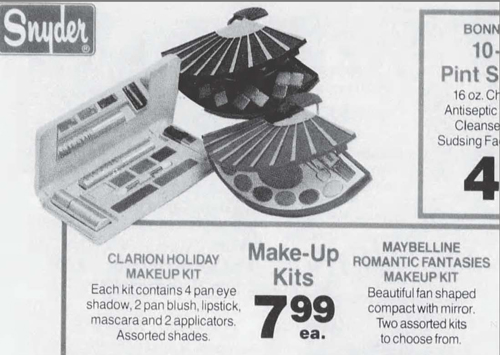 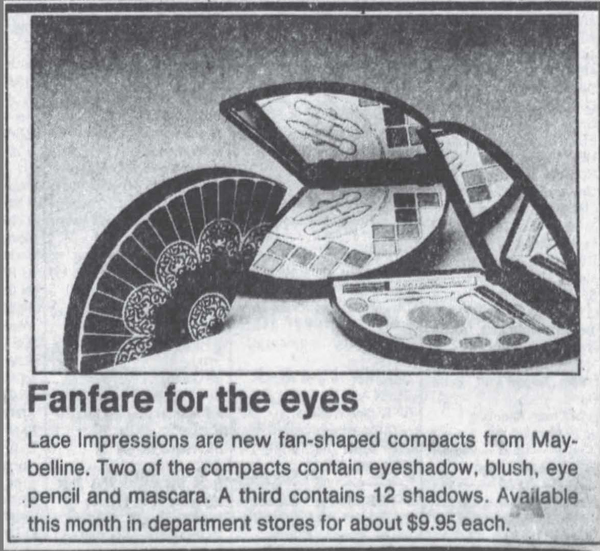 However, long before Maybelline butchered the fan-shaped compact, Wadsworth released some lovely ones in the 1940s.  Henriette, the New York division of the Kentucky-based Wadsworth, started producing these around 1941 and Wadsworth started selling them under their own name in 1946 (yet advertised them as new.)  The last mention I saw of the fan-shaped compact in ads was in 1949, so I guess they had fallen out out of favor by the early '50s.

Naturally I had to pick up one for the Museum's collection, along with several ads. 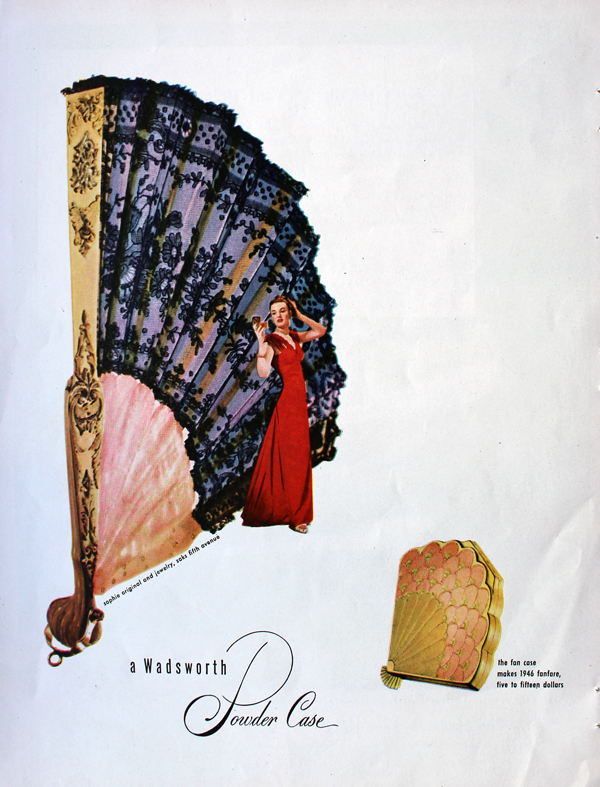 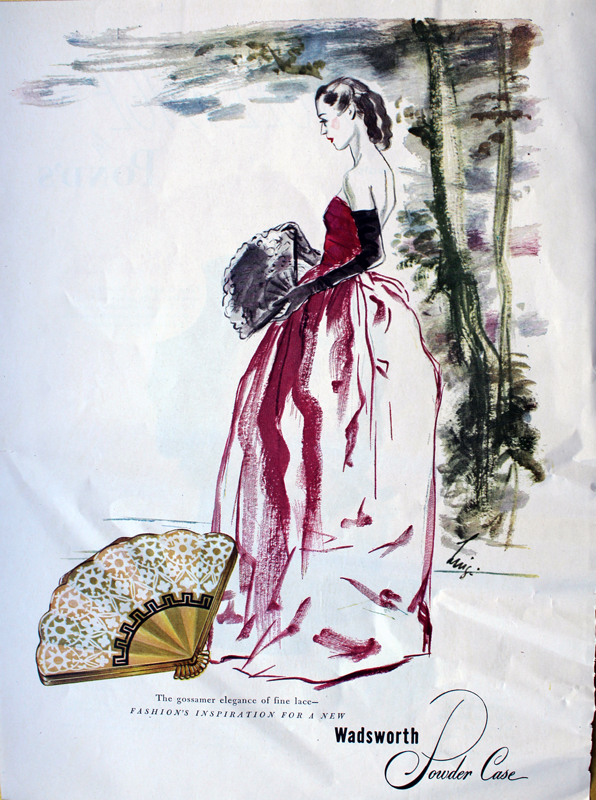 These must have been quite popular, or at least Wadsworth hoped they would be based on the amount of advertising and the mind-boggling number of styles.  In my searches I came across at least 20 different designs.  While I would have liked to have gotten my hands on one of the compacts shown in the ads, this one was just as gorgeous and in great condition so I snapped it up. 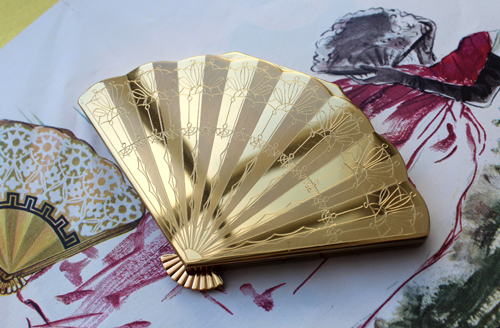 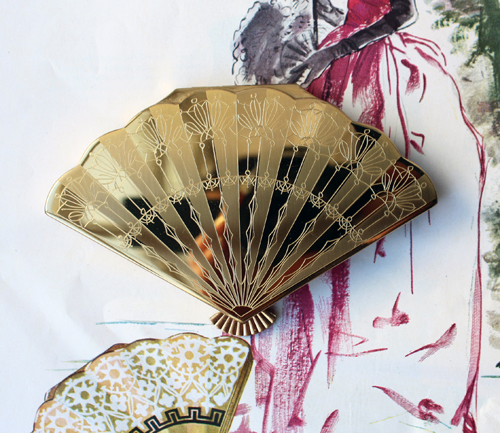 It's hard to make out from the illustration, but I think it may have appeared in this 1946 ad. 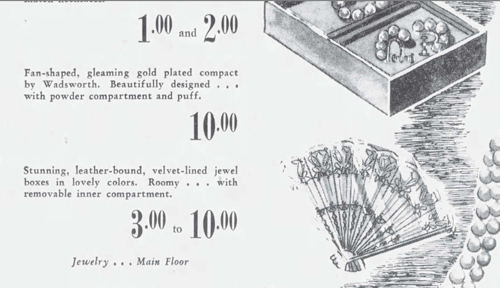 Here are a few more that I enjoyed. 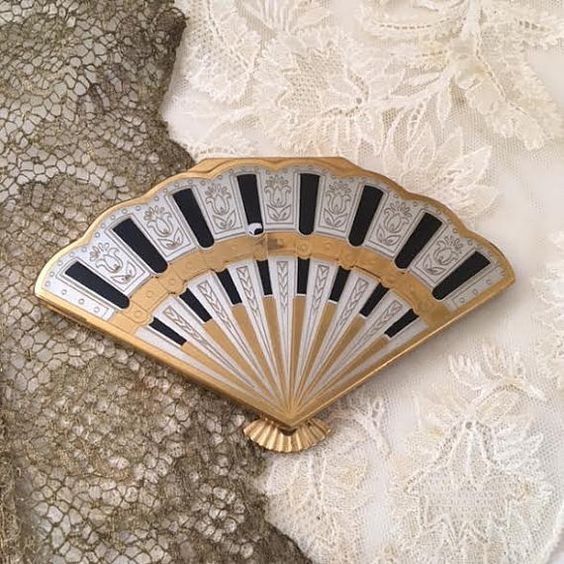 These two are from Henriette. 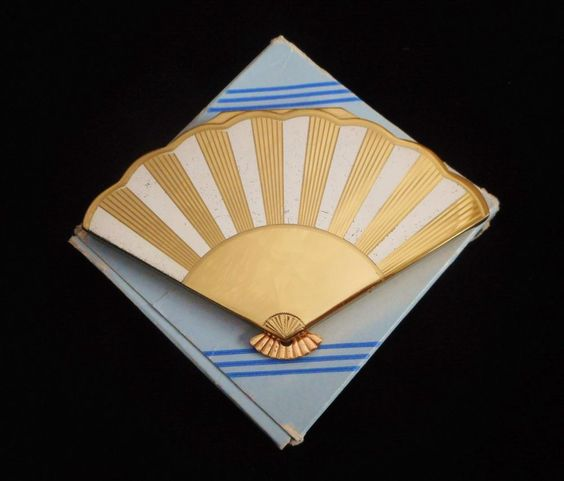 While not quite in the same elegant spirit as some of the others, I like this one because it's a reminder that Wadsworth/Henriette was a leader in manufacturing novelty compacts, such as the table and dice compacts.  And although I couldn't find one for the fan-shaped compact, I also think the company must have had a patent for it since I didn't come across any other brands with this exact shape.* 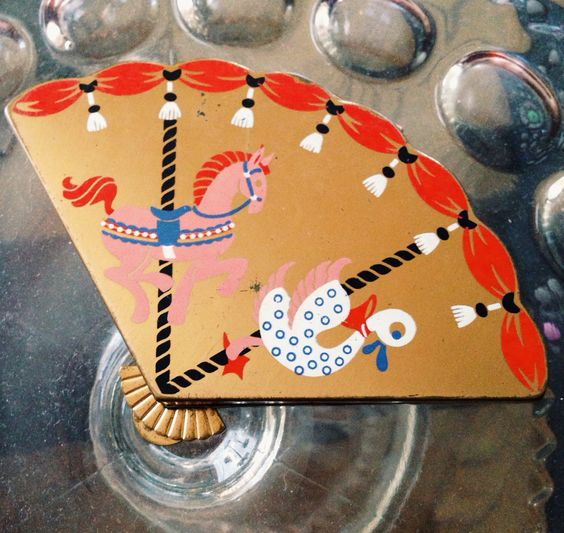 But why a fan-shaped compact?  It's not clear why Wadsworth decided to make these, but the clipping below suggests a "Chinese influence".  I'm not sure which is more cringe-inducing: the sexist title or the cultural appropriation outlined in the article itself. 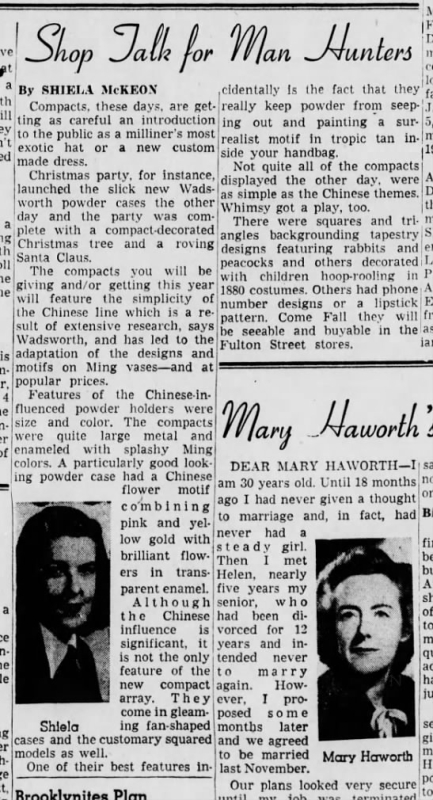 Then again, Wadsworth may have been ripping off Spanish flamenco dancers based on this 1948 ad, so it's hard to say which culture they were appropriating. 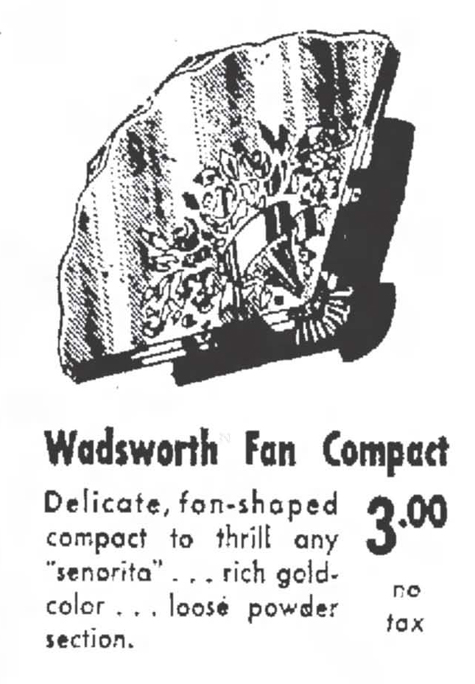 Still, it's difficult to say definitively whether Wadsworth was truly choosing to dream up some idealized notion of Chinese culture via a fan-shaped compact or whether it was just another odd design to add to their arsenal.  By and large the designs and ads seem to rely on the common perception that fans were simply a sophisticated fashion accessory, and they seemed to be more inspired by European fans of the 18th and 19th centuries than anything else.

Getting back to the LM Ladurée collection, I believe it was the result of, once again, a combination of two key influences:  Empire style in France and vintage compacts.  I really like the way they've intertwined the two this time, and even without considering the references I've discussed here, the collection is beautiful on its own.

What do you think?  Do you have a preference for either LM Ladurée or the Wadsworth compacts?

*There was another fan-shaped compact made around the same time, but not nearly as common as Wadsworth.  Near as I can figure they were manufactured in Japan under the name Pink Lady.  I couldn't find much information on these, other than they were modeled after more traditional Japanese fans than European-style ones and had faux pearl clasps.  I also think they were sold empty and you could put a powder refill or any other items of your choosing, sort of like a pill box with a mirror that could also be used for face powder.