As video games are not my forte, this will be a short post.  I did however want to briefly share what I got from the Super Mario collection from Shu Uemura.  I couldn't find much information as to why they decided to collaborate and why this year - Super Mario debuted in 1985 so it's not a major anniversary of the game.  Of course, I was unable to access the full article in WWD because my local library STILL doesn't have that particular issue available, but I was able to cobble together a few WWD quotes from Shu's artistic director regarding the collection.  Kakuyasu Uchiide told the publication, "This collection is not so much about creating, but it is about playing. I want people to be able to play with their individual style.  I really want to show what is our spirit, our DNA, our creativity. That's the only way to realize what Mr. Uemura wanted to do, which was to strive to link art with cosmetics, to link art with beauty...This time we got inspiration from culture.  Super Mario Bros. is one cultural aspect that is representative of Japan. It’s also really, really popular overseas."  I have a feeling the full article might be able to shed more light as to how the collaboration with Nintendo came about, but as the company has teamed up with many other brands and designers (and also licensed a children's shampoo - Shu's collection is not the first one to have Super Mario themed haircare) I guess it's not that unexpected that they partnered with a Japanese makeup brand.

Some of the items weren't sold in the U.S. and the palette was completely sold out, so I had to go to my trusty personal shopper in Japan to get my grubby paws on them. The packaging design is taken from the game's original 1985 look. 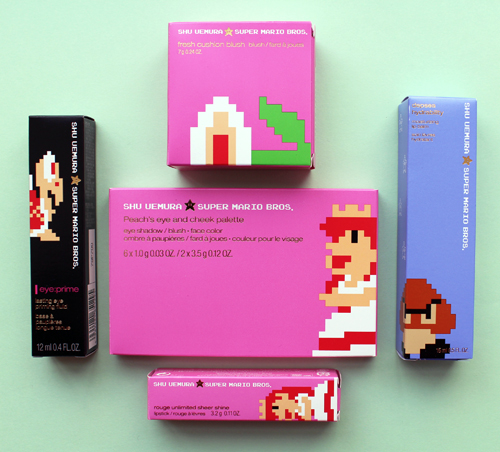 The basic premise of the game:  "Super Mario Bros. takes place in the Mushroom Kingdom. The game begins when a tribe of a turtle-like race known as the Koopa Troopas invade the kingdom and uses the magic of its king, Bowser, to turn its inhabitants into inanimate objects such as bricks. Bowser and his army also kidnap Princess Toadstool, the daughter of the Mushroom King and the only one with the ability to reverse Bowser's spell. After hearing the news, Mario sets out to save the princess and free the kingdom from Bowser.  After traveling through various parts of the kingdom and fighting Bowser's forces along the way, Mario finally reaches Bowser's final stronghold, where he is able to defeat him and send him falling into a pool of lava, allowing the princess to be freed and the Mushroom Kingdom saved."  The princess was always known as Princess Peach in Japan, but was changed to Princess Toadstool in the English version.

The flying turtles (Koopa Paratroopas) and little mushrooms (Goombas) are the most commonly appearing enemies of Mario.  He can, however, usually defeat them by tossing a fire flower their way, the motif that decorates the cushion blush compact. 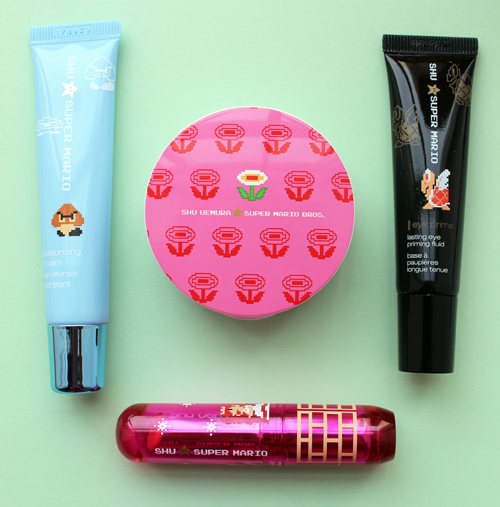 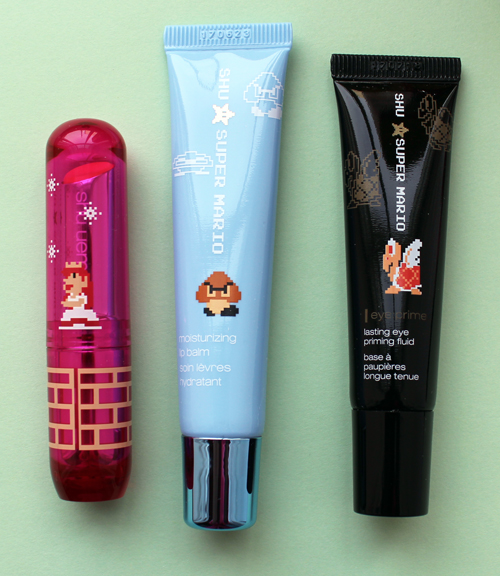 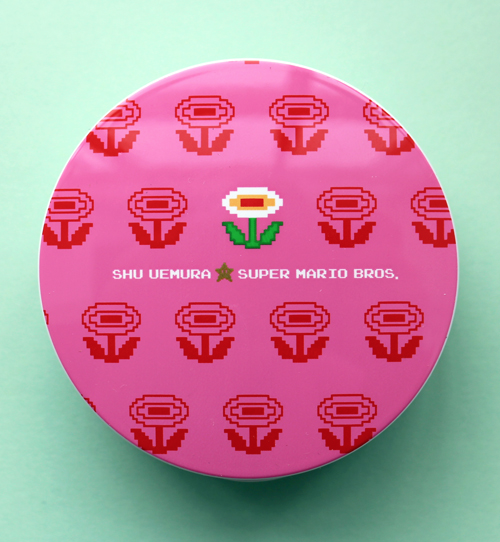 I always appreciate a pattern on the interior of boxes - such a nice little detail. 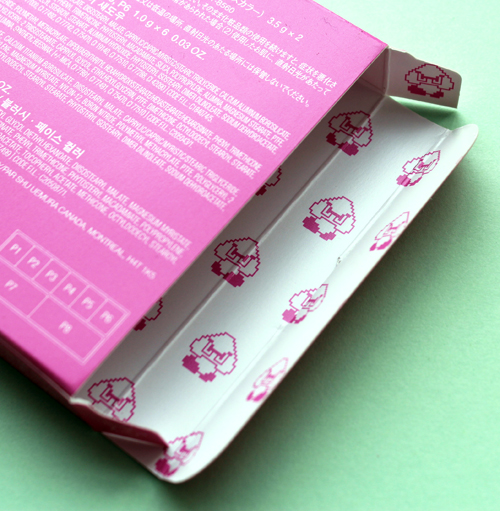 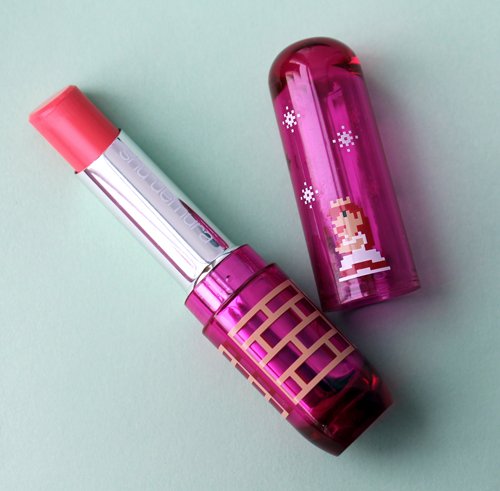 This was the only disappointment packaging-wise for me.  Unlike other Shu cleansing oils, the pattern isn't printed directly on the bottle, only on the plastic wrapping.  The reason I know this (and was able to avoid mistakenly taking off the outer wrapping) was because I purchased the smaller Mario cleansing oil to actually use, as I thought it would look cute in my bathroom.  I went to peel off the wrap and realized the print was on there and that the bottle itself was plain.  I have no idea why Shu decided to did that, as the patterns are printed directly onto the bottle with all my other limited edition oils.

The palette was the standout of the collection, which sold out in a flash in the U.S.  It's easy to see why - it has most of the main characters from the game complete with gold foil details, and the blushes on the inside are embossed with more motifs from the game. 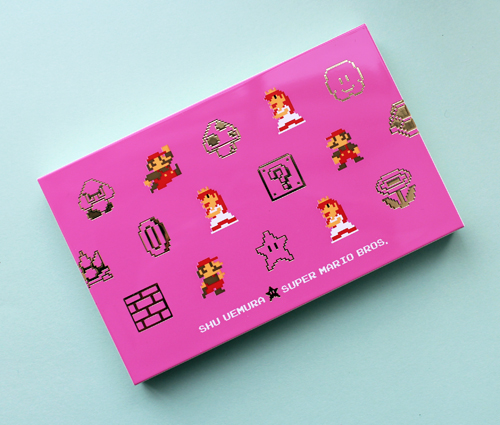 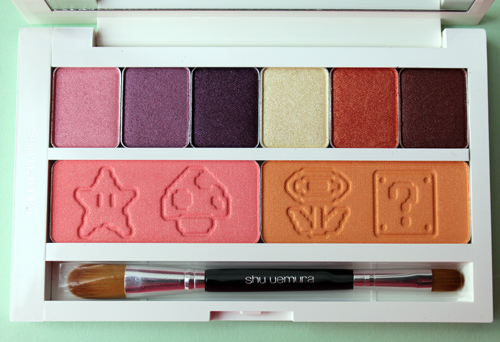 Here's just a short history of Super Mario Bros.  In the early '80s Nintendo was struggling to keep afloat in the American market.  The CEO ended up tapping a graphic designer who had never designed a game in his life, Shigeru Miyamoto, to come up with a compelling story and accompanying game.  Loosely based on Popeye characters, Donkey Kong debuted in 1981 and introduced "Jumpman", who would become Mario two years later.  Nintendo knew their audience wouldn't really respond to Jumpman - a proper name was needed.  Mario ended up being the chosen moniker, named after a landlord who, during a meeting, stormed in and demanded the overdue rent for the warehouse Nintendo was occupying at the time.  While Mario Bros. was relatively popular, it wasn't until 1985 when Super Mario Bros. debuted that the game really took off.

Some other fun facts about Super Mario, courtesy of The Guardian:

What do you think of this collection?  Do you like video games?  While I played Super Mario a few times as a kid, I probably would have been more into video games if I wasn't so uncoordinated. :P