Who let the dogs out? Pai Pai!

Let me start off by saying that I am not a dog person.  It might have something to do with having a truly nice cat for 18 years (always wanted to cuddle and never hissed once!), or regularly being exposed to my aunt's slobbering, hyper, incredibly smelly canines, or the fact that I was bit by a black Labrador when I was a teenager...there's nothing like a trip to the ER for stitches and a tetanus shot after some off-leash beast sinks its teeth into your leg at the exact moment the idiot owner is saying "Don't worry, he won't bite!"  (Insert eyeroll emoji here).  Whatever it is, I've always gravitated towards felines.  Having said all that, Pai Pai's latest collection, created by Pinut Brein, proved too cute for me to pass up. 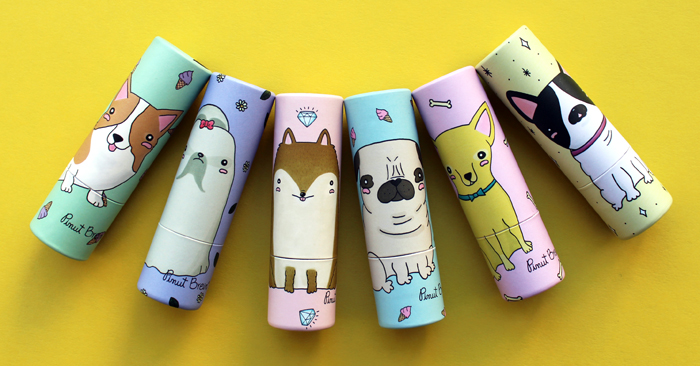 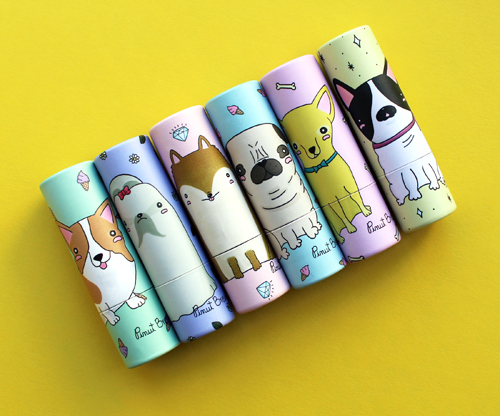 I love that they all have names and in some cases have little descriptions and/or are based on real dogs.  Miau is the chihuahua, but I don't seem to have any other info on him.  The bichon frise is named Tiara, and she's adamant about making people know she's NOT a poodle.  Djoko, the Pomeranian, is actually a dog belonging to a Mexico City fashion and lifestyle blogger. 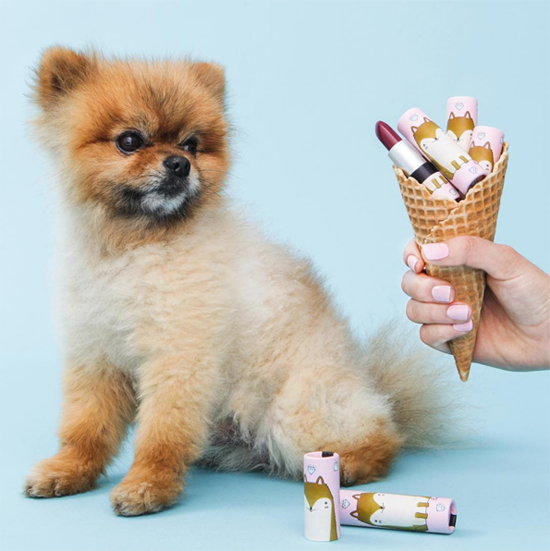 The French bulldog is a princess named Petunia.  She enjoys walks in the park, regardless of the fact that she doesn't have a boyfriend to stroll with.  :D 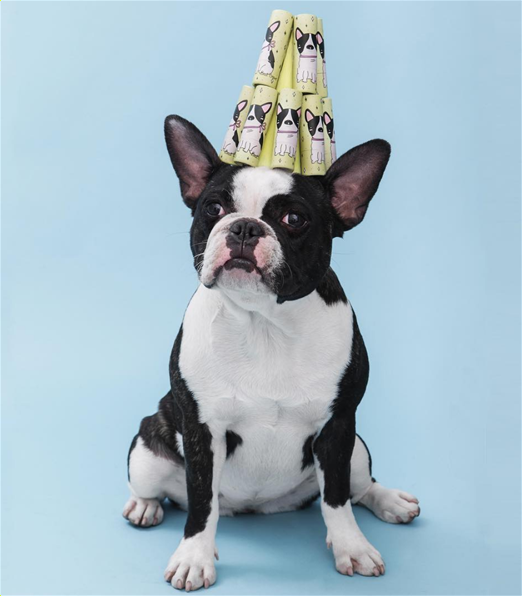 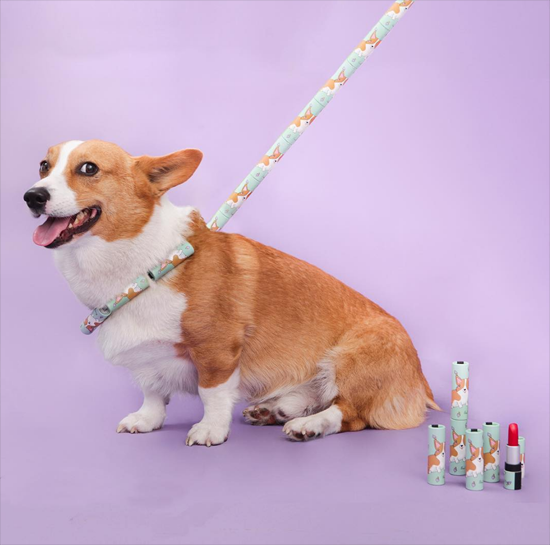 Rocco, the pug, is my favorite. 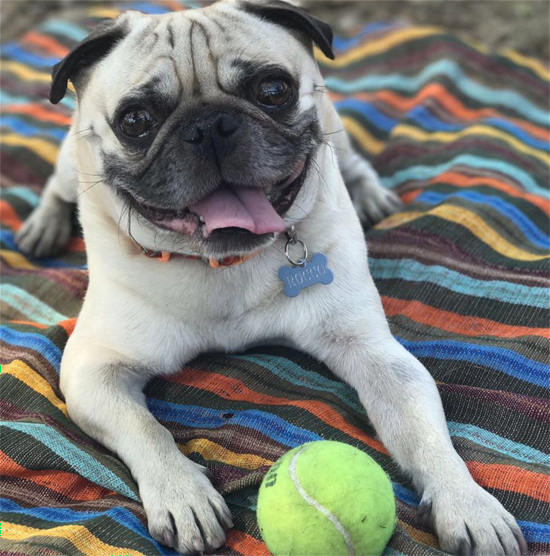 Despite not liking dogs I've taken quite a shine to pugs over the past couple of years.  I think it's not only because of their adorable smooshed faces, floppy ears and little curly tails, but also because I suspect they're essentially Babos in dog form - I hear they're not very bright, but one of the sweetest and most loving breeds.  And they're lazy too, which describes most of our plushies to a T.  I don't think I've formally introduced Barney here at the blog or assigned him any Museum work, but he joined us last year.  I managed to get him to pose with the Pai Pai lipsticks, which he then tried to eat.  He definitely fits in with the rest of Museum staff, right? 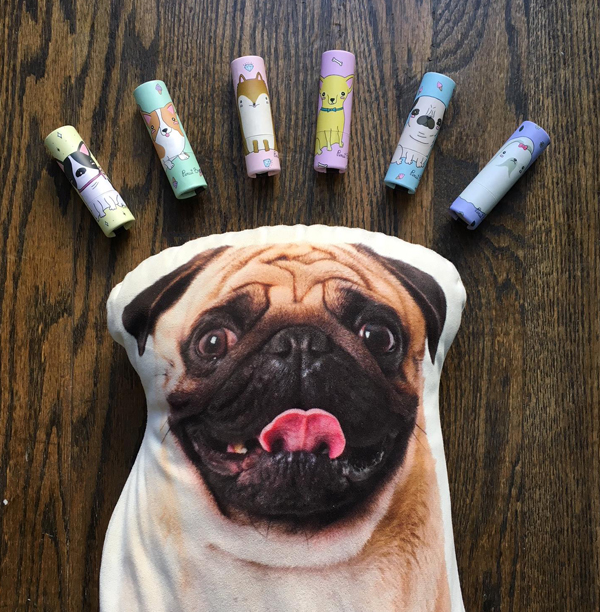 Now for some information on the artist.  Pinut Brein is a brand created by Mexico City based artist Maria...well, I'm not sure of her last name.*  So I'll just refer to her first name.   Inspired by the work of her architect parents, Maria always enjoyed sketching and doodling.  She kept her passion for drawing under wraps while studying audio engineering and working briefly as a sound/video editor.  But after meeting several other illustrators in her native town of Xalapa in 2012 and participating in their artist collaborative Malacara, Maria decided to strike out on her own and establish Pinut Brein in 2015.  (It's a play on "peanut brain" [cerebro de cacahuate"], a nickname teasingly bestowed upon Maria by her older sister).  I find her style utterly charming without being saccharine.  The illustrations work equally well as prints for one's living room as they would for nursery walls, i.e., not too mature for children but not too juvenile for adults.  And though they're stylistically pretty different, the ability of Pinut Brein's drawings to work on a range of items intended for different audiences is similar to that of Poni Lab. 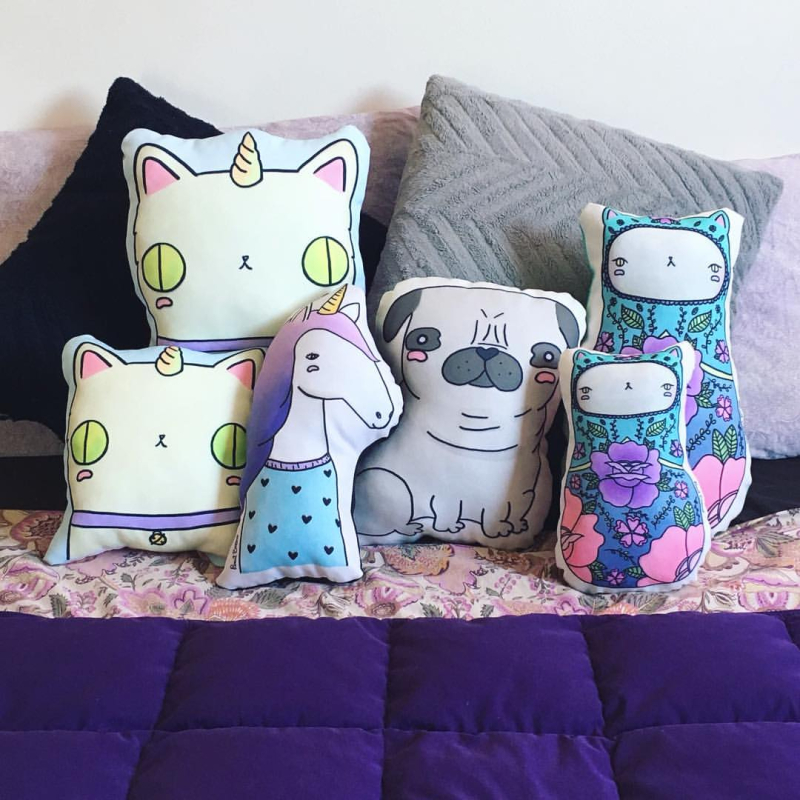 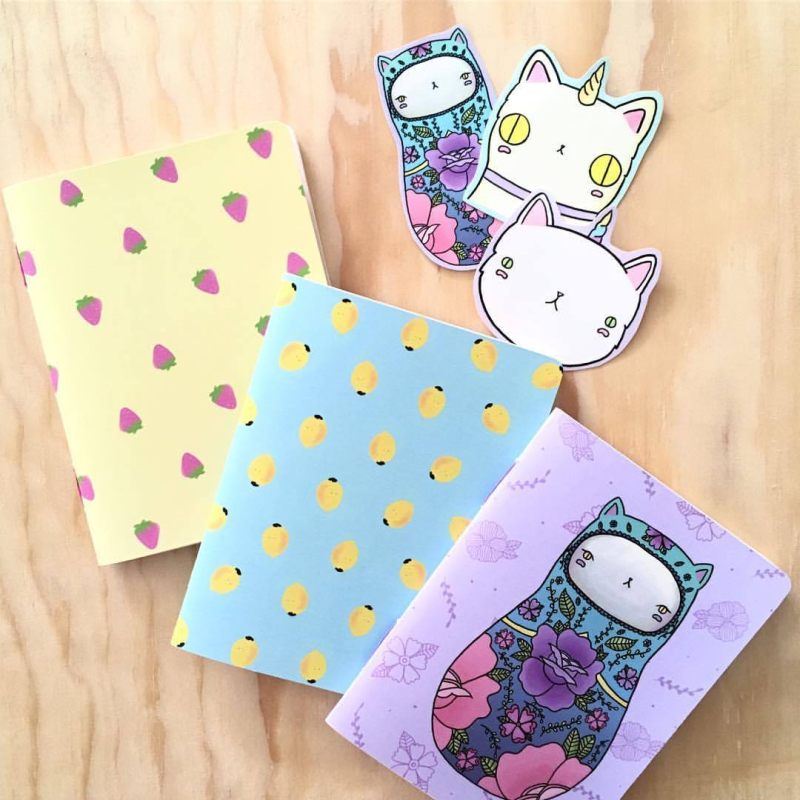 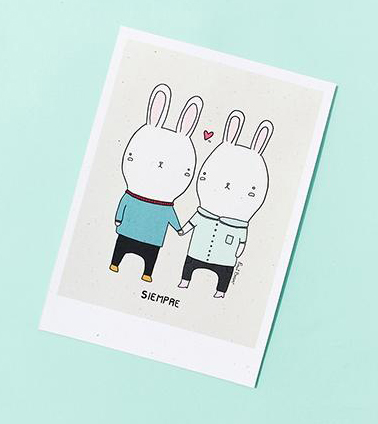 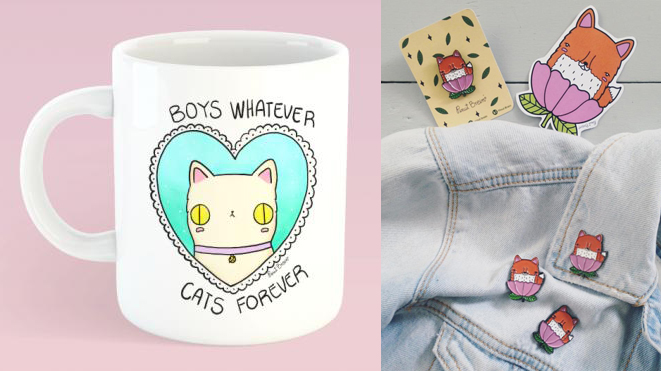 Her favorite animals are dogs and horses, and she dreams of owning a pony some day. 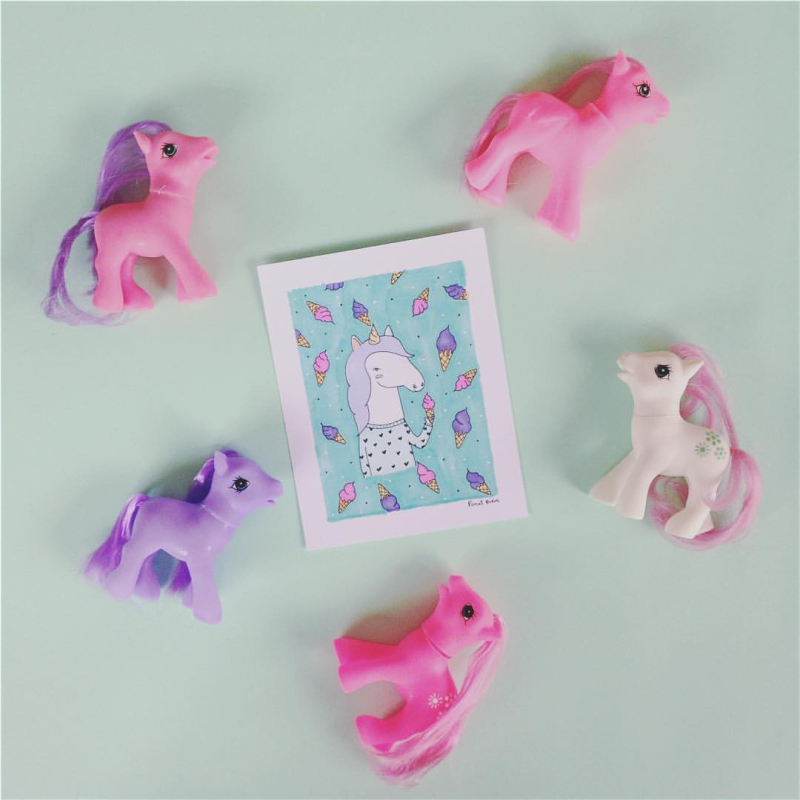 As for her artistic process, Maria tries to infuse each animal she creates with their own personality and assign human characteristics, such as a cat leading a punk band or a bear who's also a sailor.  At least, that's what I gathered from this quote:  "Desde hace mucho me ha gustado dibujar y crear personajes, la temática principal es el reflejo de distintas personalidades humanas en animales; por ejemplo, un gato y su banda de punk, o un oso marinero." Some are her own unique creation, while some are based on people she knows, hence the dogs of the Pai Pai collection having names or borrowed from real people.  I absolutely love this concept, as our plushies, though generally lazy and not very smart, each have their own distinct personalities.  The idea of giving animals individual character traits demonstrates the artist's genuine fondness for animals; you can tell there's a real love for creatures great and small, they're not just cute motifs to her.  I also admire the fact that Maria sketches with an actual pencil and paper first, then transfers the concept to a digital format and adds color and other finishing touches that way.  Don't get me wrong, digital illustration requires just as much skill, but I'm old-school and will always appreciate paper more than screens.  ;)

Here's one of her illustrations for Nylon Español.  I love the name of this cat-unicorn in Spanish: un "gaticornio".  So precious!! 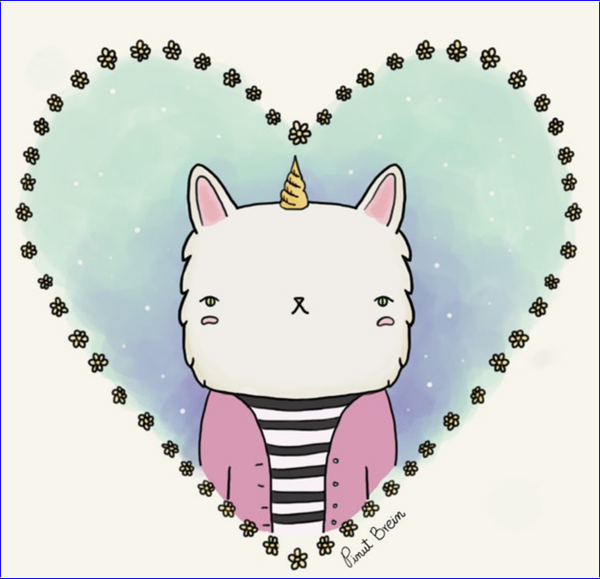 In addition to the Pai Pai lipstick cases, the recent earthquake in Mexico spurred Pinut Brein to create illustrations of some of the rescue dogs who saved dozens of people trapped in the rubble:  Frida, Eco, Akasha and Titan. 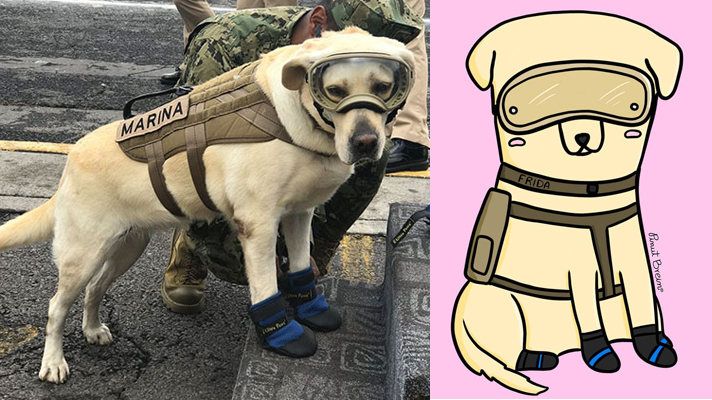 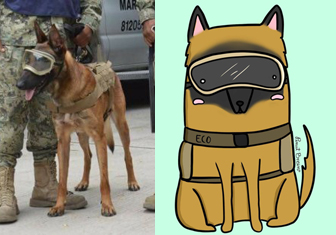 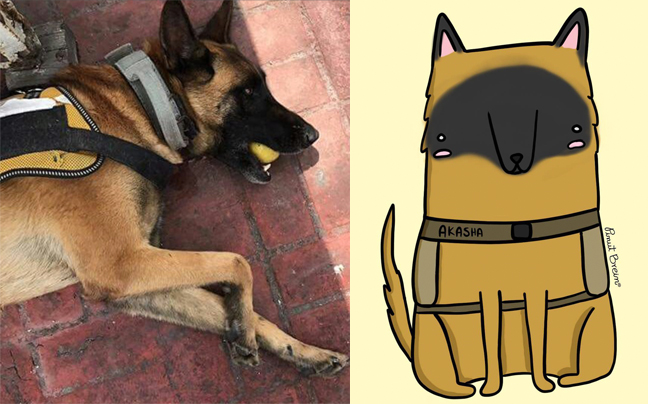 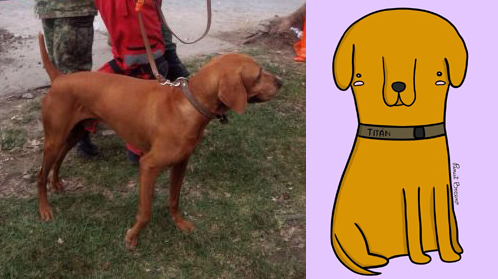 Pai Pai chose Frida and Eco to appear on some cosmetic bags, with all of the bags' sale proceeds being donated to earthquake relief. 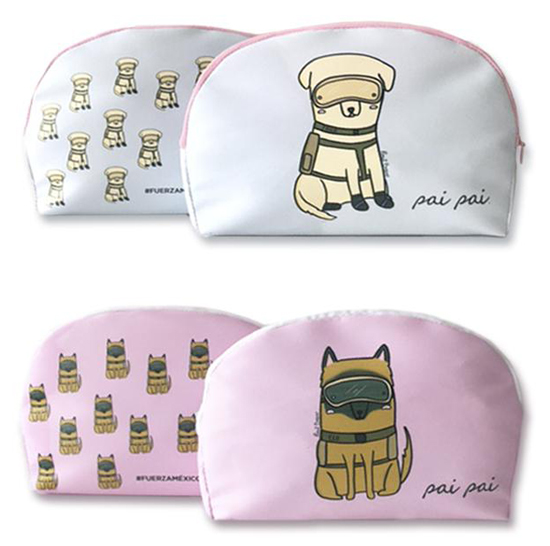 Unfortunately with all the holiday releases I haven't gotten around to order these and it looks like Frida is sold out, but perhaps I will treat myself to Eco.  :)  And I can always buy this wonderful kit with stickers of all four doggies, since the proceeds from this also go to earthquake recovery efforts. 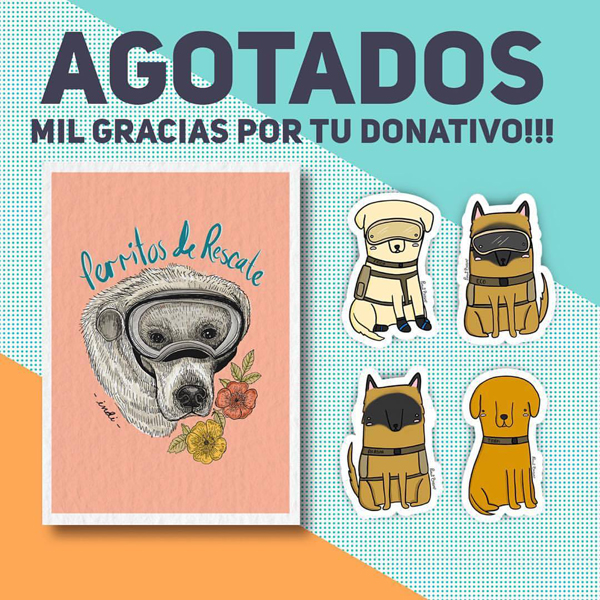 So, despite my general preference for cats, this latest collection was definitely irresistible.  Pinut Brein must be very talented to make a non-dog person like me become smitten with these canines.  Which perrito was your favorite?

*The site I linked to lists "Maria del Mar Flores Ibarra"...but it seems kind of long to me, so I don't know whether it's just Del Mar or the whole thing.