Hopefully you're not forest-ed out since I have many more woodsy things I'd like to share as a follow up to the fall exhibition. This was a very rich theme and I had so much fun exploring it.  Here are a few more things that were running through my head while planning the exhibition.

Between Jennifer Lawrence's amazing flower-filled updo at the Mother! premiere to my long-standing infatuation with The Blair Witch Project (I watch it every fall and it still scares the hell out of me!), there was plenty of pop culture inspiration.  But since I follow so many blogs, I also came across photos, paintings and other art that helped shape my vision for the exhibition.  In addition to the fabulous illustrations by Alexandra Dvornikova and the beautiful forest paintings of Tyrus Wong, here are a few more I had rattling around in my brain.

I so wish I had any photography skills, because these images by Dave Pluimer and Kilian Schönberger blew me away.  I found both of these photographers via Abduzeedo, an excellent design and art blog. 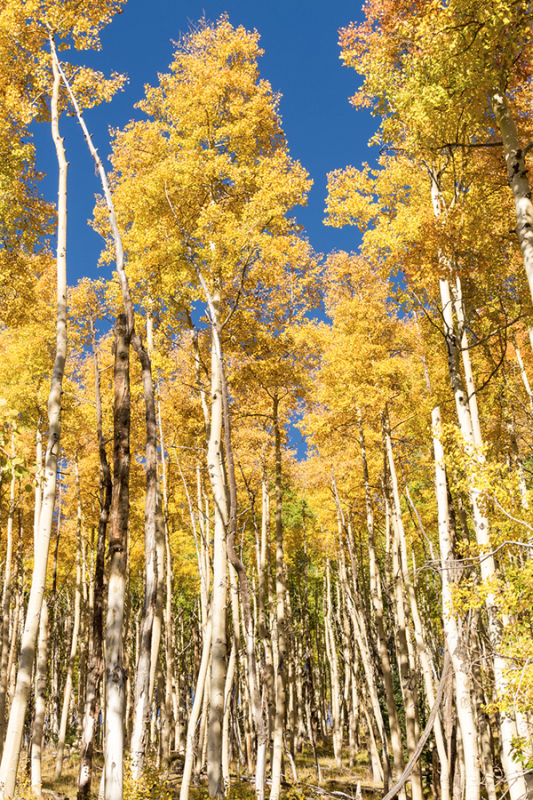 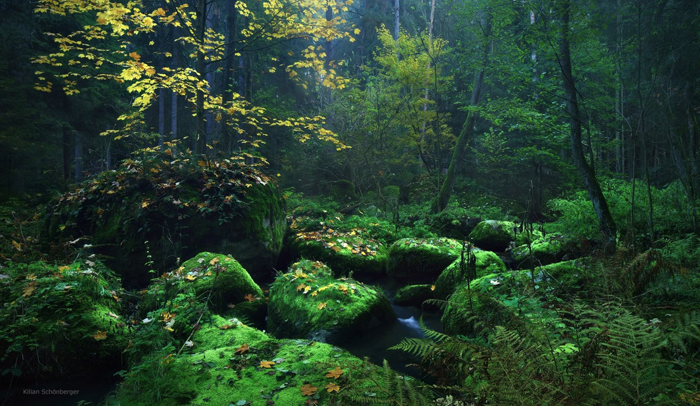 I loved this little leaf lady created by Nele Maas for the #FacetheFoliage project. 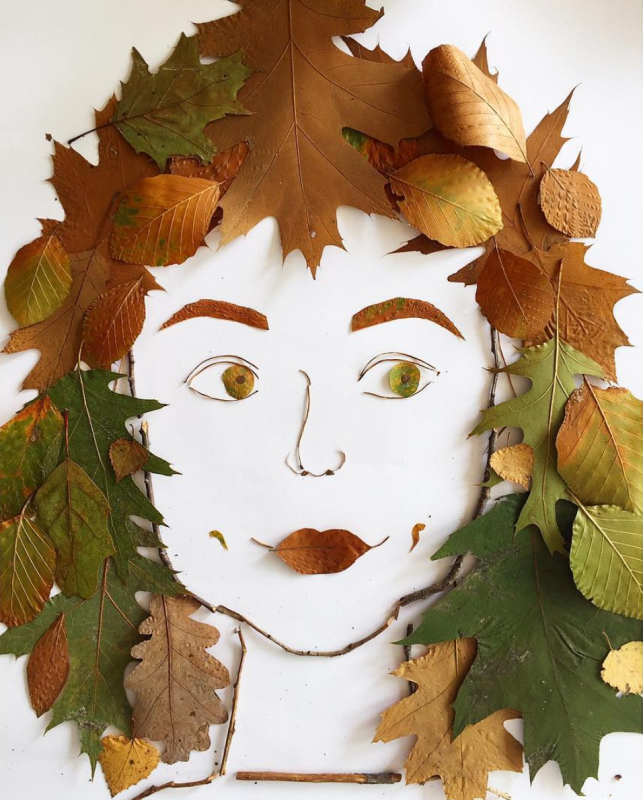 These posters by Andy Kehoe could not be more aptly titled: "Forest Sentinel".  I love the idea of the animals literally overseeing the forest and guarding it...and possibly protecting any humans that wander in. Finally, I can't believe these oil paintings by Janek Sedlar - I thought they were photos!  Hauntingly pretty. 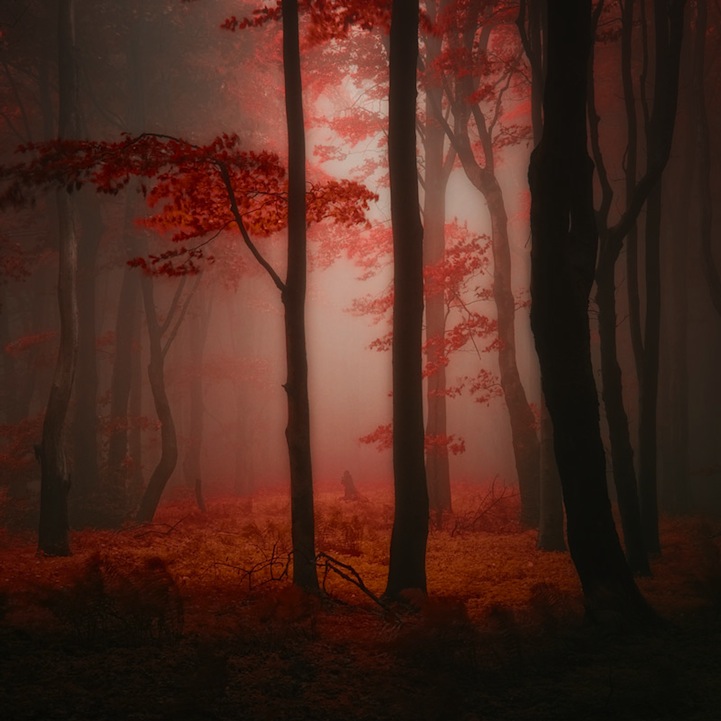 There were tons of vintage and contemporary items I debated putting into the exhibition, but decided not to include due to their lack of seasonal appropriateness, or they weren't actually available for sale.  Still, I wanted to show some of the other things I was mulling over.

You might remember the Museums' fall 2015 smackdown featuring some very pretty leafy makeup items.  Even though they're not that old, I had too hard of a time tracking down Catrice's Fallosophy collection and Laura Geller's Italian Garden set - some of the Catrice items were for sale on Ebay but the exact shades I wanted, plus it would have taken weeks to get here, and I searched for the Laura Geller set but had no luck finding it until well after I had finalized all the exhibition items.  There was also Essence's 2014 Hello Autumn collection, but I couldn't find any pieces from that either.  Fortunately there were plenty of vintage leaf-adorned items that I came across.  These are the ones that I was going to buy but they either were too pricey, not in the best shape or not available for sale so I ended up skipping them. 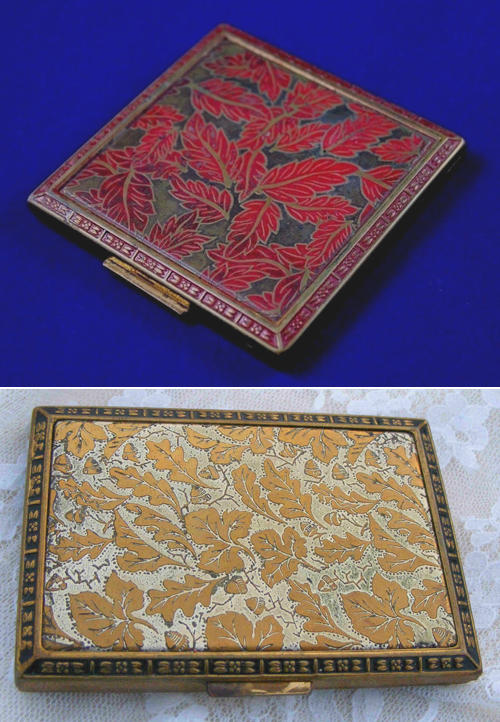 This one had such a unique design - too bad it sold long before I could pounce. 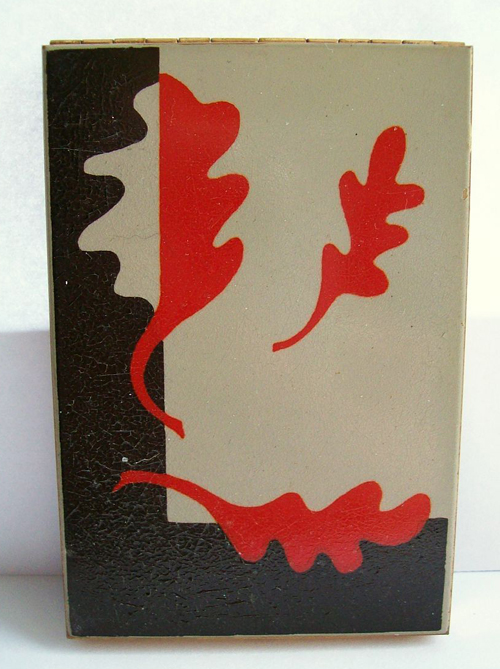 This one from Volupté was a contender, but I decided it was looking too Canadian flag to me.  Not that there's anything wrong with their flag, but I wanted cascading leaves rather than a single one. 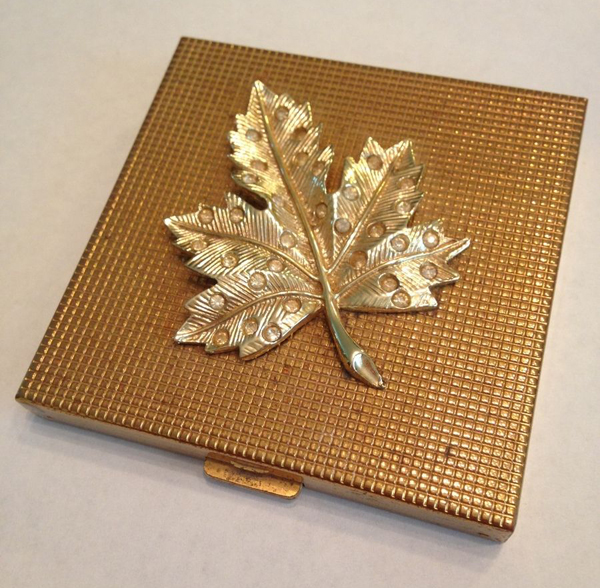 Very nearly bought this since the ad is also available.  However, once I looked closer at the ad I realized it was a holiday one, so I figured it would be too Christmas-y for a fall exhibition. 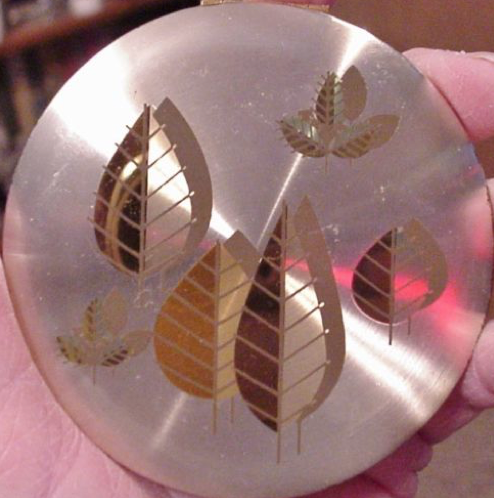 The ad shows many other pretty compacts in addition to the leaf one.  The "Whimsey" one would have been so cute for the fall exhibition - love that the little lady has a bird's nest for hair!  And obviously I'd give my eye teeth for the pineapple-adorned "Tropicana" compact. 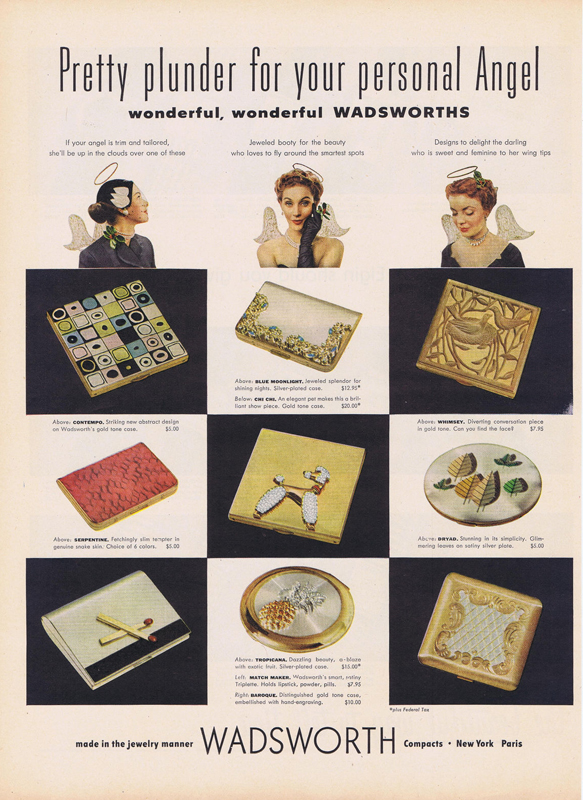 The other super popular woodland/forest motif for vintage items was deer.  So many fawns and bucks and does!  But I ended up skipping most of them as they were more gazelle-like, such as this compact by Evans. 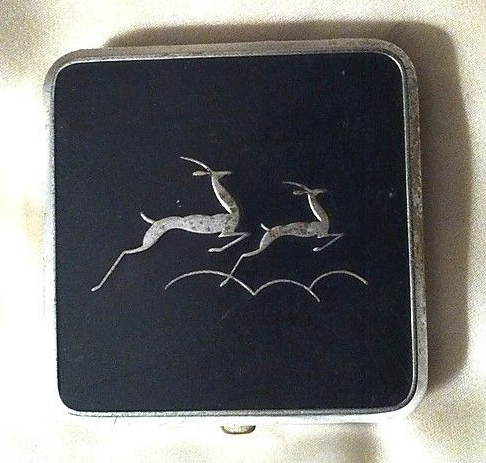 And these looked like reindeer, which, again, I felt was too holiday-ish.

Elgin offered a slew of deer compacts in addition to the ones featured in the exhibition.  But I was partial to the "Woodland Fawn" design since the others were really gazelles and simply not forest-y enough for what I had envisioned.  Still, they're pretty cute and also plentiful. 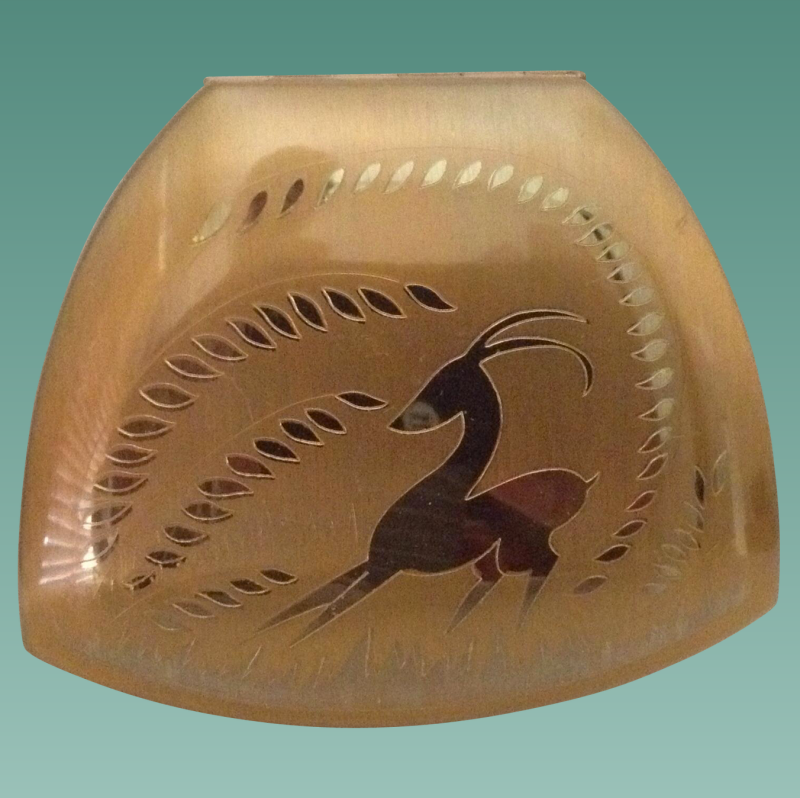 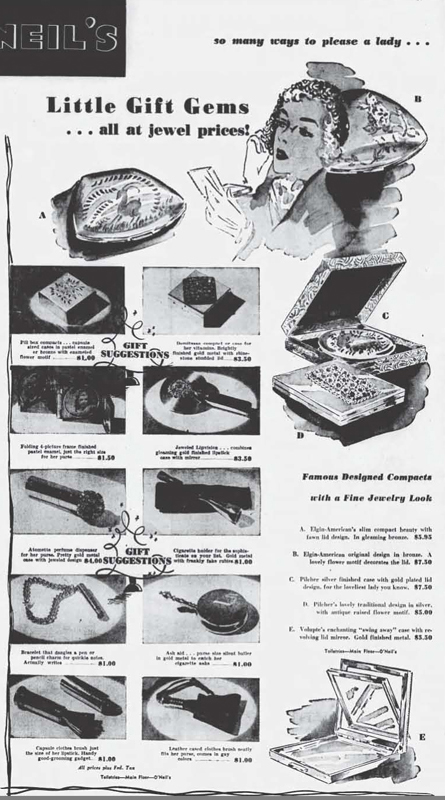 This design also came in white or red enamel.  It's very striking but looked more like the jungle than forest. 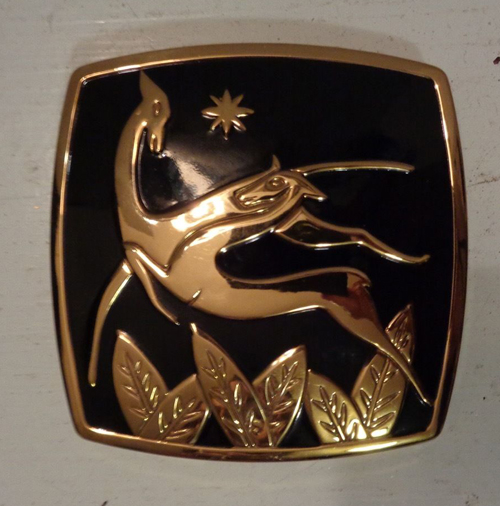 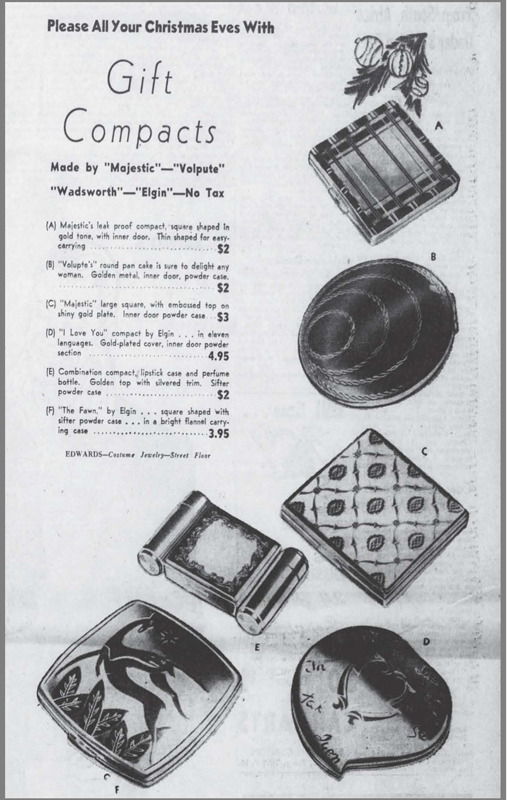 This Elgin design was by far the most popular of all the deer...or at least, the company advertised it a ton starting around 1947.  The last mention I saw was in 1951. 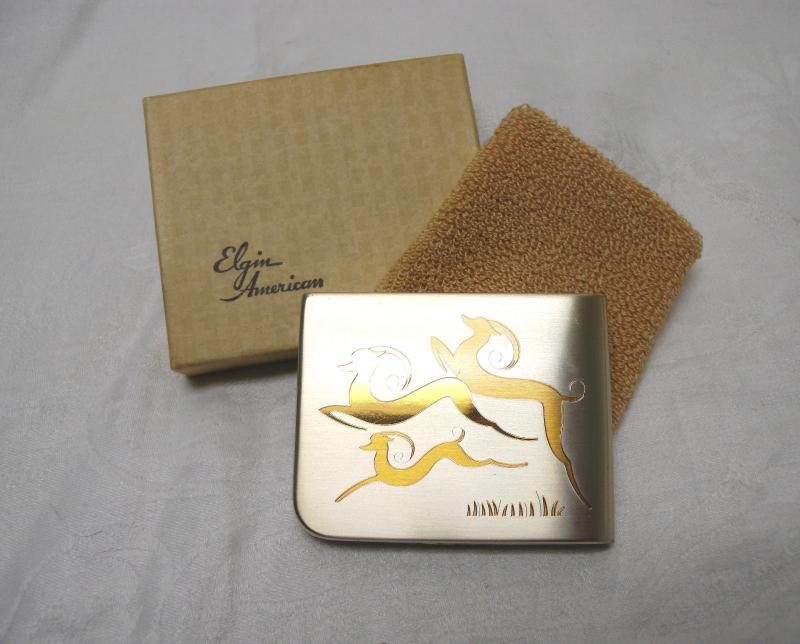 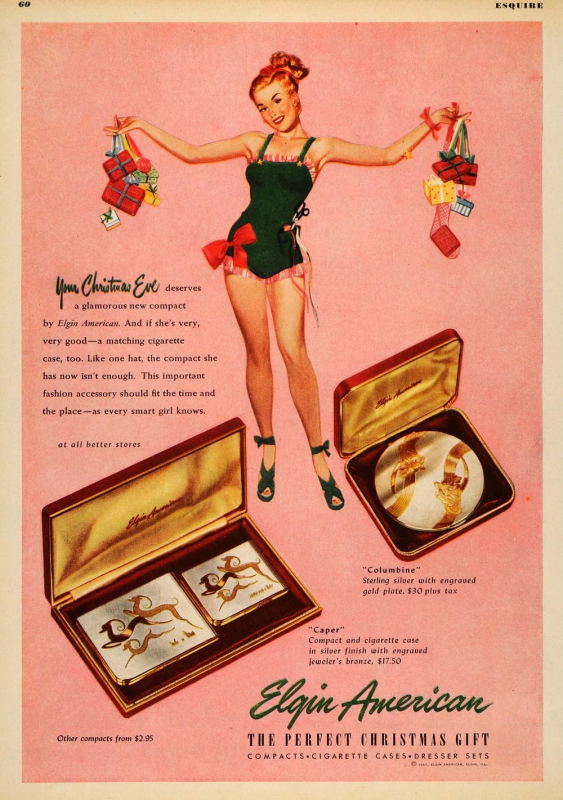 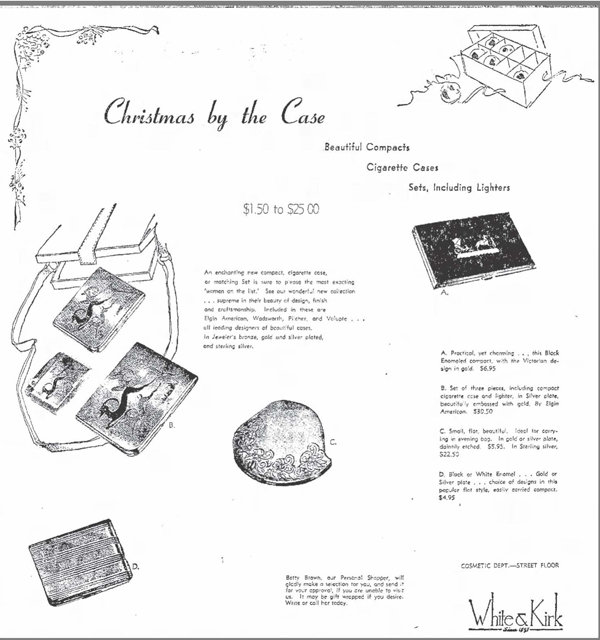 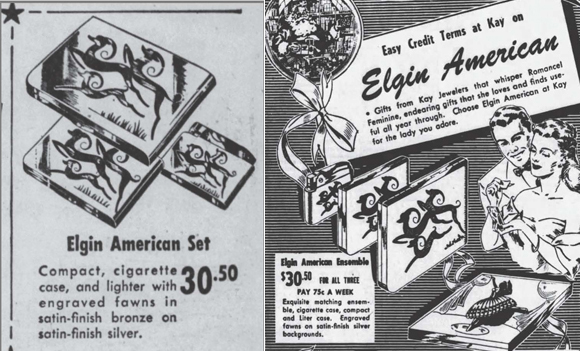 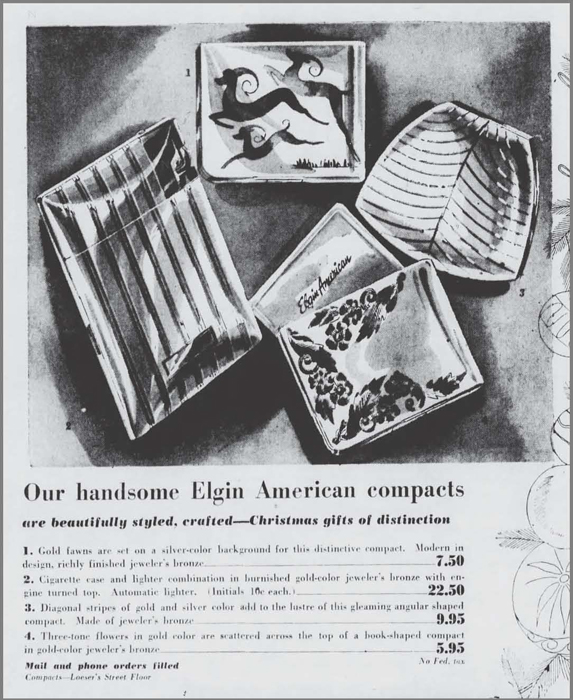 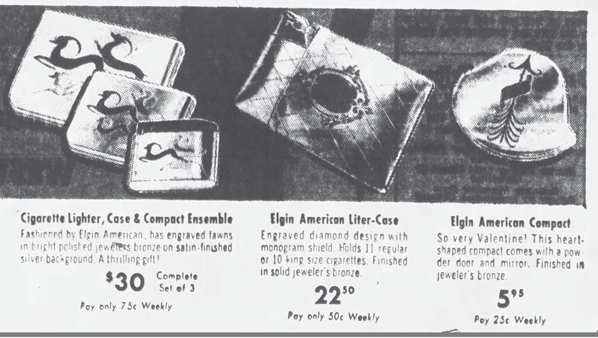 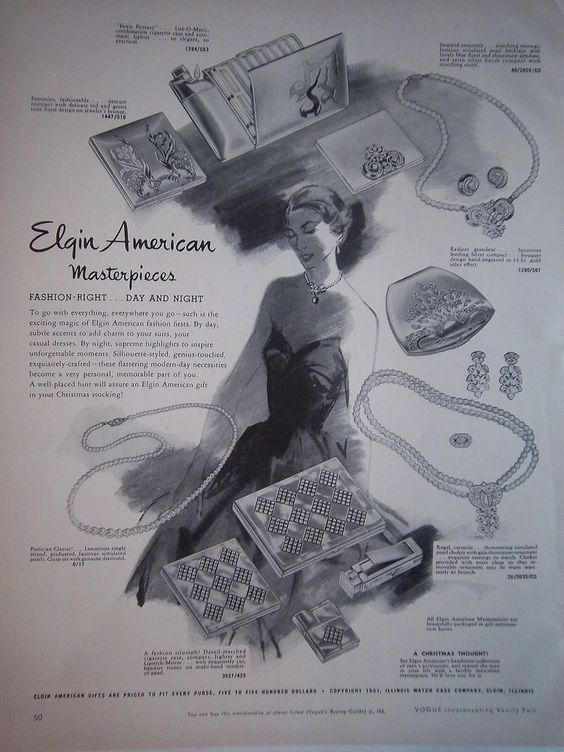 What's interesting about all these is that even though they're post-war, they resemble Art Deco designs.  I wasn't alone in this observation either.  As Laura Mueller, author of The Collector's Encyclopedia of Compacts, Carryalls and Face Powder Boxes notes, "The 'Leaping Gazelles,' competing in the thirties with the Borzoi and Scotty dog animal motifs, for some reason became a very popular motif again after WWII.  The Post Deco flavor of these cases is obvious.  The sharp angles are softer and the fauna is more realistic.  However, art deco in feeling, these later cases must not be confused nor valued with true Art Deco.  A leaping gazelle does not always an Art Deco case make" (p. 149).

Anyway, these last two were so cute, but the Kigu one on the left was nowhere to be found for sale, while the Honeywell on the right was available but pretty scratched.  I've been wanting a Honeywell in the Museum's collection ever since I saw their adorable mermaid compact, but the scuff marks on this one almost make it look like the poor deer have been shot through the head with arrows.  Maybe that's just me though.  In any case, it didn't make the exhibition cut.

Other critters and general forest scenes

Now for some of the harder-t0-find forest residents and other woodland goodness.  In terms of contemporary items, the animals in the holiday 2013 Cosme Decorte set would have been a great addition to a woodland-themed exhibition if it wasn't for the red and white color scheme and unmistakable Christmas tree.  Another Cosme Decorte item, the Wandering Grace compact by Marcel Wanders, was another possibility I mulled over, but ultimately decided against including it since it just didn't look forest-like enough to me.

This fox compact by Estee Lauder was gorgeous, but also expensive. 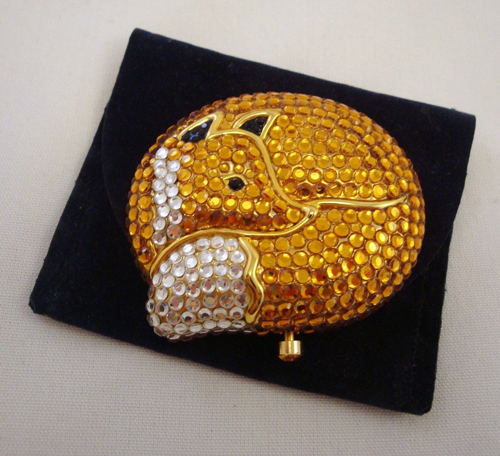 Bunnies were a bit easier to find, but so many of them screamed Easter to me, so I really had to dig for ones that were either more fall-like (such as the Folklore design) or basically season-less (the Shiseido figurine).  I think this vintage powder box would have been perfect though - definitely more forest rabbit than Easter bunny. 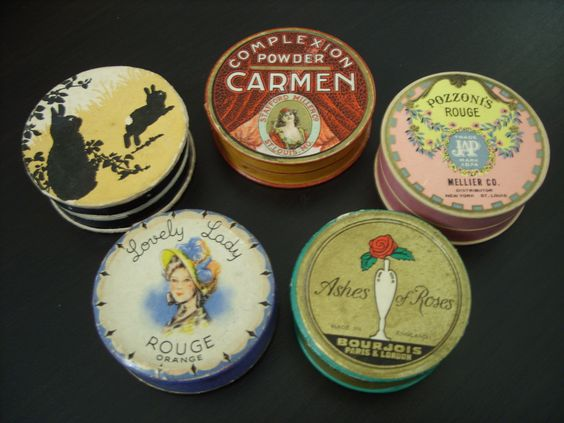 These squirrel compacts definitely would have made it into the exhibition, if they didn't cost a whopping $876 and $1,436, respectively. 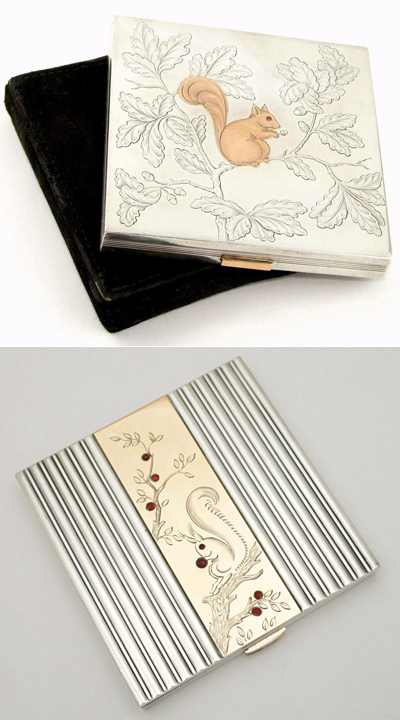 I also looked for trees and general forest scenes.  I didn't turn up much that reminded me of a forest in autumn - most of what I was seeing looked like tropical landscapes - but this vintage compact definitely would have made the cut if it hadn't already sold.  It's pretty unique. 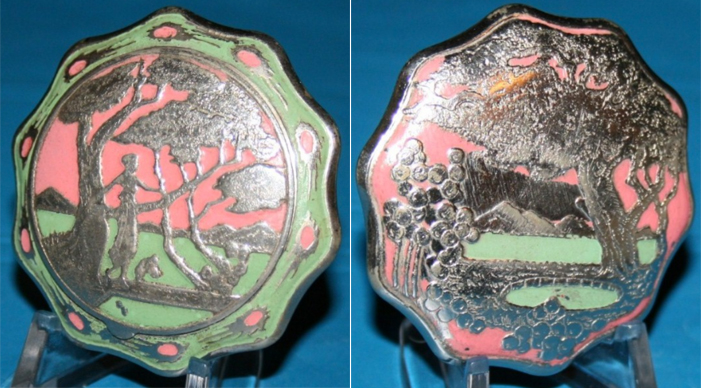 And that about sums it up!  I hope you're not sick of the forest now!  Any favorite pieces here?