I've noticed that many indie brands are really pulling out all the stops for Halloween in recent years.  Forget special holiday packaging - these companies put their energy into crafting some spooktacular design for Halloween items.  Here are my picks for 2017. 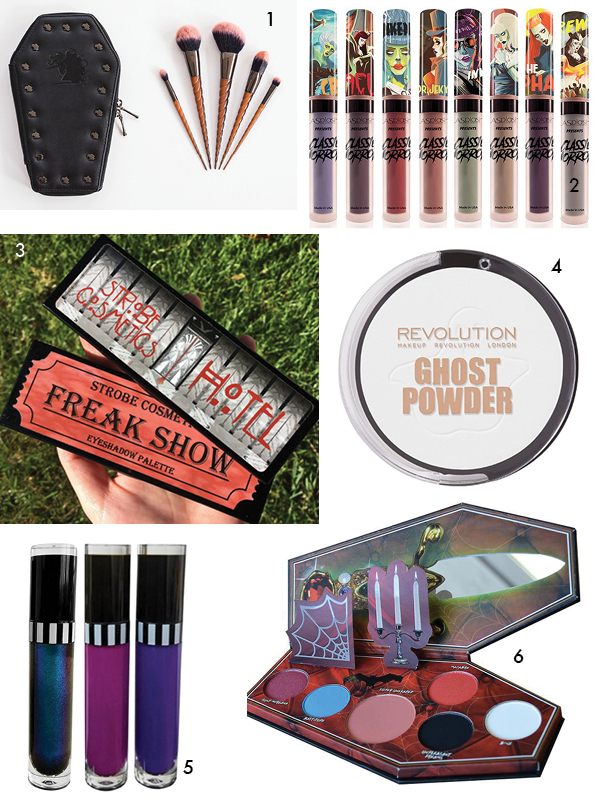 1.  I'm still waiting with bated breath for Unicorn Cosmetics mermaid brush set, but in the meantime they released a pretty awesome set for Halloween.  Not only do these brushes come in a coffin-shaped pouch with bone-shaped zippers, their handles change color.

2.  L.A. Splash has all your favorite classic horror ghouls in their Halloween liquid lipstick collection.

3.  These American Horror Story-inspired palettes aren't new - they were originally released last year, I believe - but they are new to me so I had to give them a shout-out.  (As of today, however, it looks like they're sold out).

4.  The remarkably simple design of Makeup Revolution's Ghost Powder works for both adults and kids...and at that price you can get one for you and another for the little Halloween'ers in your life.  I bet my niece would love this!

5.  With the name Pretty Zombie Cosmetics, makeup inspired by all things spooky isn't just for Halloween, it's the brand's entire raison d'etre.  This year they introduced new colors and packaging for their liquid lipsticks, which appear to be a nod to Beetlejuice.

6.  This one was also released last year, but once again I only found about it now.  In honor of Elvira's 35th anniversary, Lunatick Cosmetics released a coffin-shaped palette complete with pop-up spiderweb and candelabra.  Perfect for any Mistress of the Dark fan.

I hope everyone has a fun and safe Halloween!  Which one of these was your favorite?