It was quite the quest to get this collection into my grabby paws, but with the help of my phone's alarm and my lovely mother-in-law, I was able to nab this highly coveted collaboration between Moschino and Sephora. 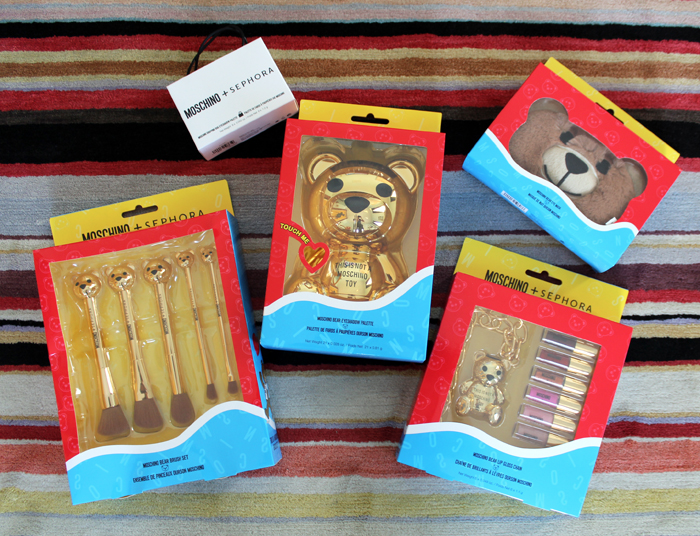 As soon as I laid eyes on it in July I knew I had to have it for the Museum, especially considering that one of the Museum's interns is a sweet little cubby who would be very happy to see it. 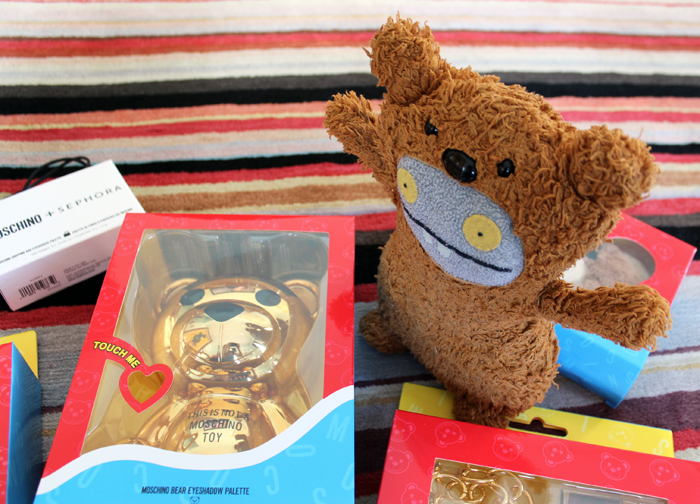 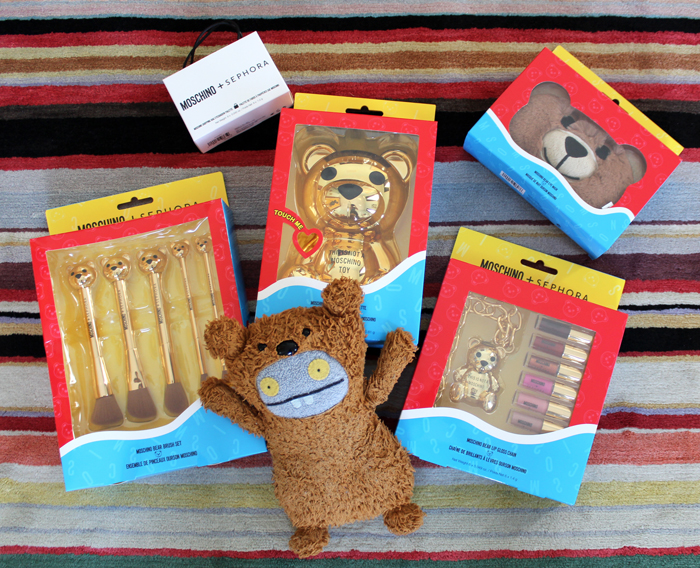 I don't think I'm getting these back from him. 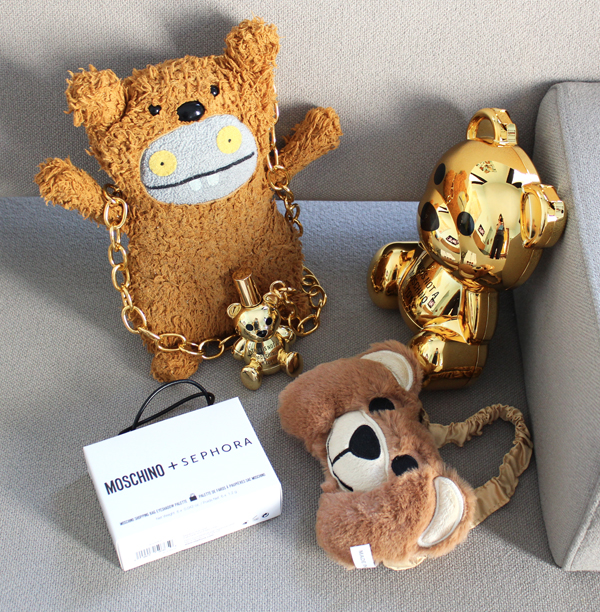 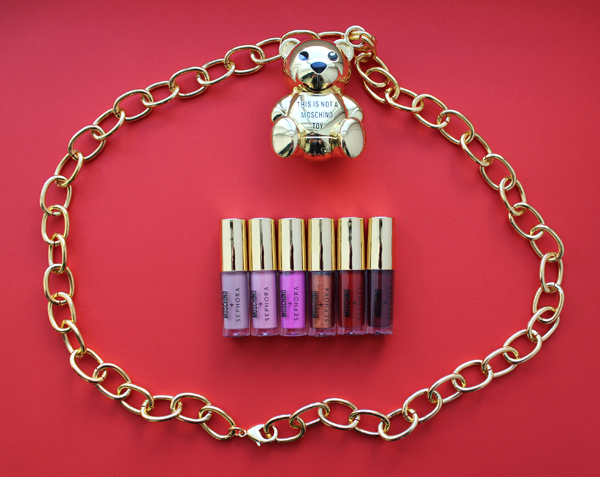 Not only did my MIL go out of her way to get to Sephora (and early - she got there at 9:10 and there were already 2 people waiting!), she picked up the shopping bag palette for me in addition to the eye shadow palette.  And also refused to accept reimbursement for either item.  I'm a very lucky girl, yes? 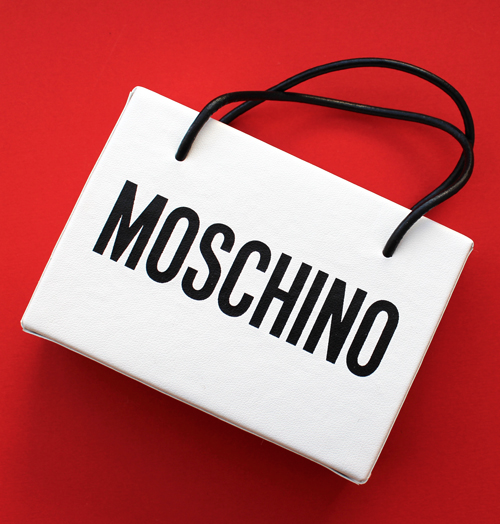 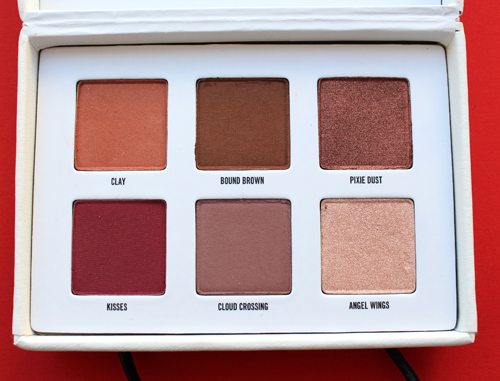 And here we are!  The star of the collection, the most coveted and hard to get.  My MIL reported that the store only got 6 in stock.  The two women ahead of her got theirs (1 each, thankfully), my MIL got one for me, and then she said the guy behind her bought the last 3, the jerk. 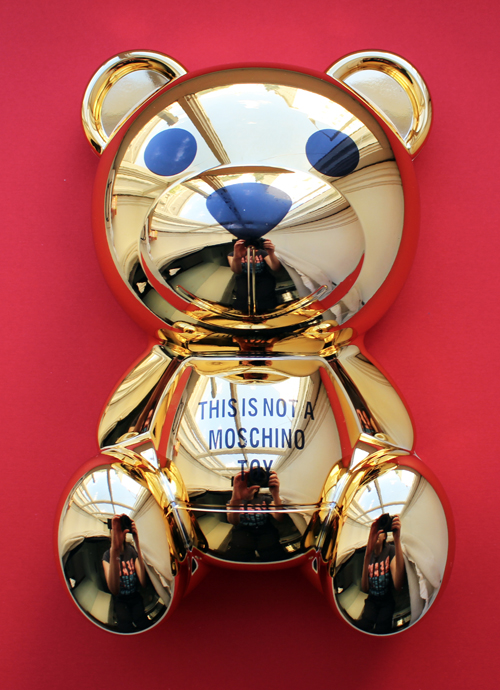 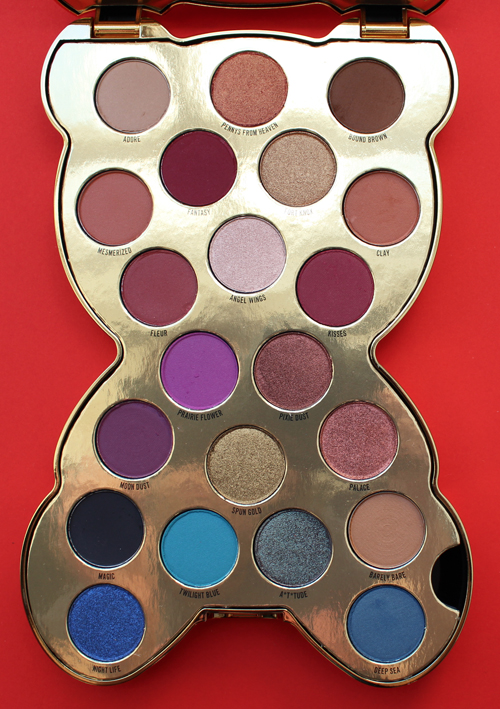 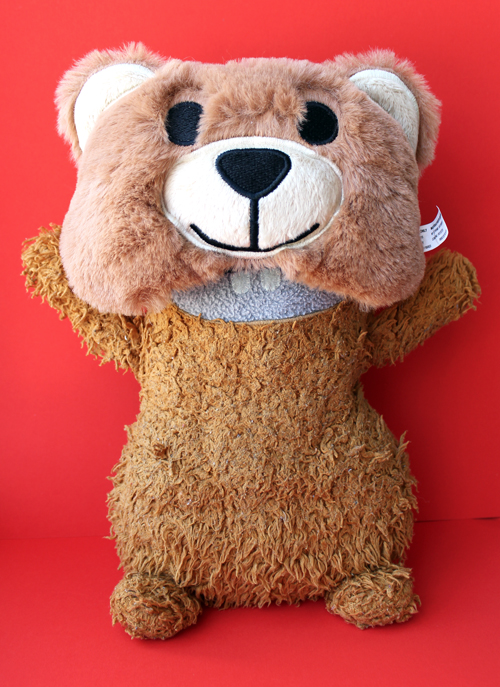 Let's explore a little bit of the fashion behind the teddy bear and shopping bag motifs.  Franco Moschino (1950-1994) began his irreverent line in 1983, poking fun at the world of couture despite (or perhaps because of?) being totally immersed in it.  I'm ill-equipped to fully explain his style since I am not a fashion historian, but I found some good articles here, here and here if you're so inclined.  I was flabbergasted to learn that both the bears and bags seen on the runways the past few seasons were inspired by Moschino's original designs - I had mistakenly believed that both were new concepts dreamed up by the ever-wacky Jeremy Scott, Moschino's current creative director.  Little did I know that Moschino had a sense of humor about high fashion long before it was, well, fashionable.  Scott is doing an excellent job of carrying that torch by putting his own spin on Moschino's original aesthetic and adding some new motifs (I adore this "capsule" collection, controversial though it was), but the teddy bears and shopping bags are not actually his brainchild.  This was the famous dress and hat from Moschino's 1988 fall collection that put the bear motif on the fashion map. 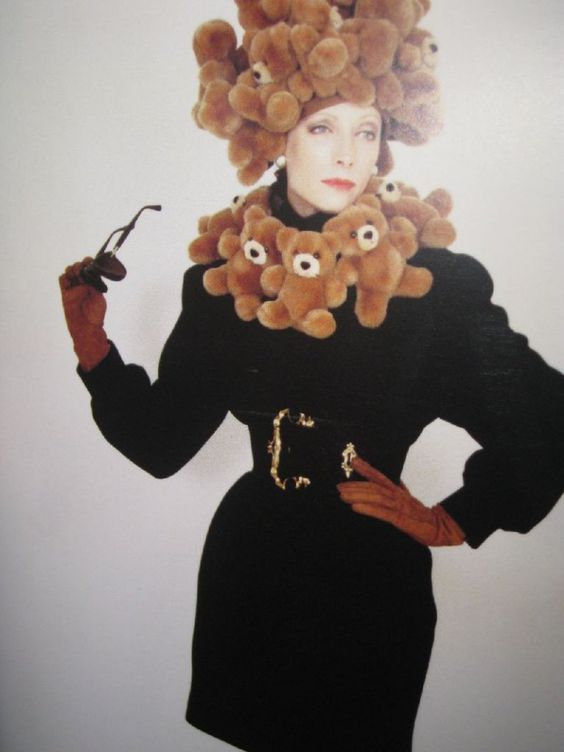 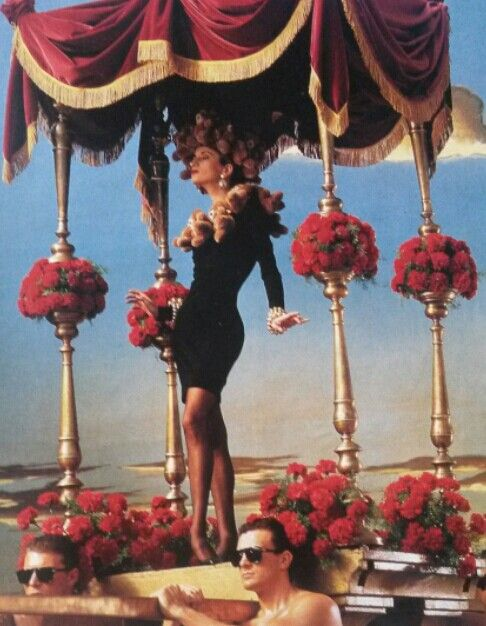 The shopping bag dress had debuted a year prior. 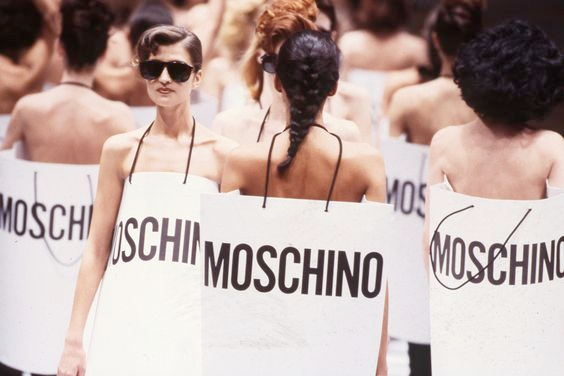 Under Rossella Jardini, Moschino's director from the designer's untimely death in 1994 until 2013, both of these iconic pieces were resurrected for the house's 30th anniversary. 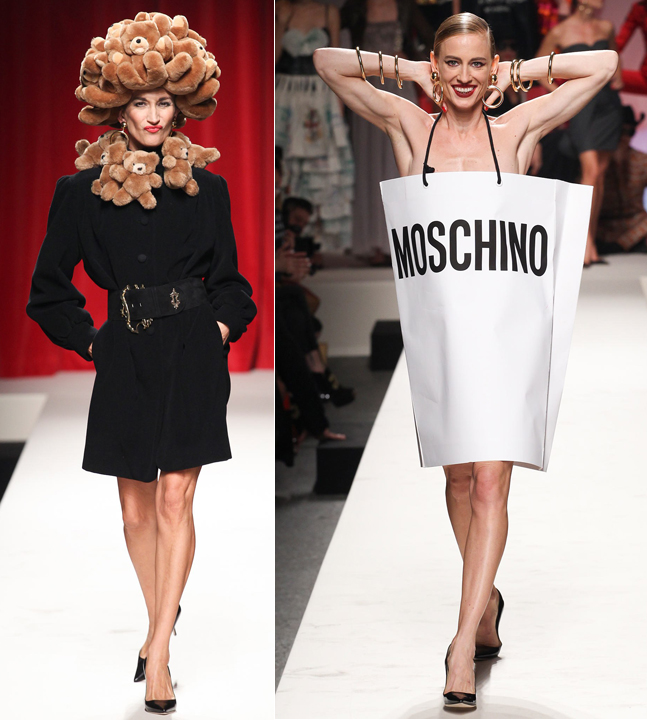 Scott took over in October 2013, and wasted no time building on the teddy bear empire by releasing the Toy fragrance roughly a year after his appointment.  This was not unexpected, seeing as how before his post at Moschino, Scott had designed these teddy bear sneakers for Adidas in 2011. 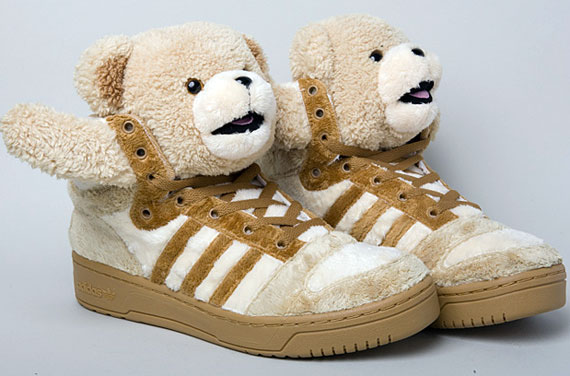 I love the Surrealist-esque "This is not a Moschino toy" on the bear's shirt, since it's one of my favorite art movements, but also because Franco Moschino was also inspired by both Surrealism and Dada so it fits perfectly with his original vision.  I'm less crazy about the fact that you have to remove the bear's head to apply the perfume, however.  (See last year's Halloween post for similar creepy items). Scott also continuously works in new iterations of teddy bear fashion.  I'm truly impressed by how he's able to reinvent one of Moschino's stand-out pieces while remaining true to the original designer's vision as well as his own - the iconography is similar but has been modernized to reflect contemporary culture, taking on a slightly different meaning now.  This article explains it better than I can:  "For Scott, the teddy bear motif has been a career theme of symbolic materialistic significance similar to how Jean Charles de Castelbajac famously used it, but in the context of the American designer's new era at Moschino, the teddy bear's connotations are something else.  When fangirl mania was at its height circa early-mid 90s and teen idols like Take That were climbing a never-ending fame ladder, their hordes of fans would bring teddy bears to concerts and outside hotels, throwing them at the bad as tokens of their support. With the teddy bear as their mascot, this generation of ultimate fangirls displayed the innocent, childlike obsession that lies at the root of fandom in pop culture, and portrayed the spirit of materialism and unapologetic commercial opportunism it generates. Franco Moschino created his house in a time when the foundation of this kind of excessive 90s fandom was being built - courtesy mainly of Michael Jackson and Madonna - and while his work dealt more with the consumerism of the time, brand idolisation was a huge part of Moschino's genetics." 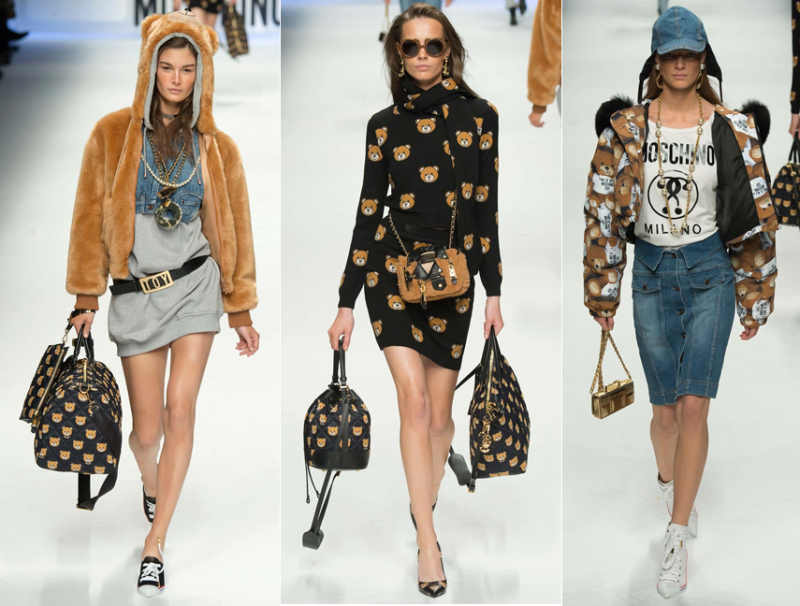 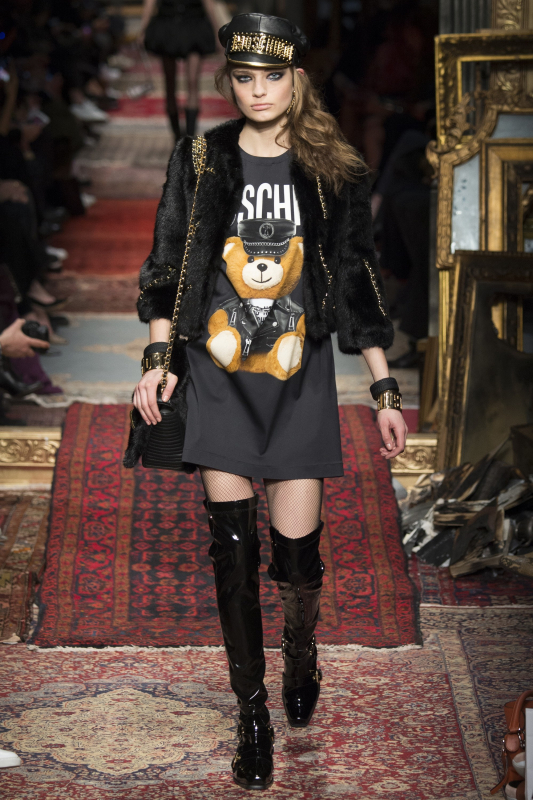 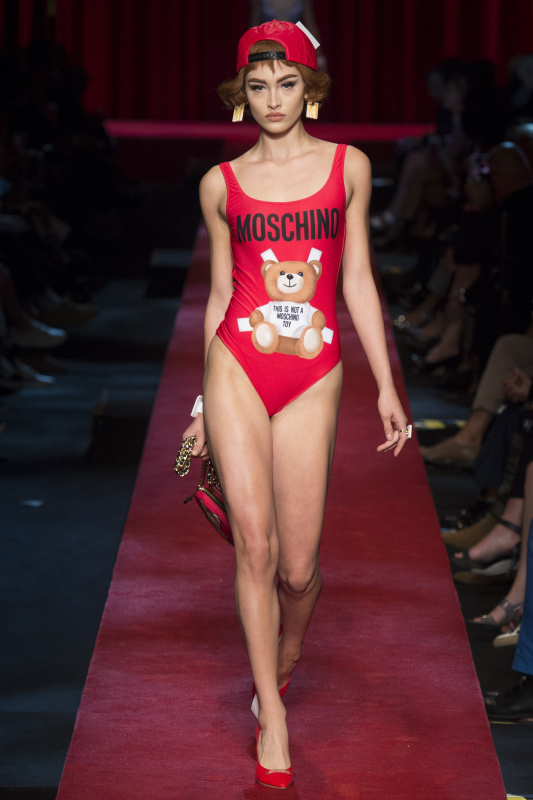 Ditto for the shopping bag, incidentally. Getting back to the Sephora collection, obviously the packaging is a natural extension of the Toy fragrance.  I think Franco Moschino would be pleased not only by Scott's fashion but by the Sephora collection as well.  The packaging is slightly absurd and therefore lends a tiny bit of Dada flavor (especially so with the brush set), and I personally think the shiny gold finish is poking gentle fun at our cultural obsession with status symbols and "bling".   And since the collection was in collaboration with a higher-end makeup store, there's the trademark Moschino mix of humor and quality.  As for Scott, I think he had fun with the collection as well, noting that he "loves the power of makeup and the way it can transform your mood."  He also points out that a makeup line from a couture house allows accessibility for those who can't afford the fashion, which I'm always in favor of.   "I learned very early on how much young people love my work, and sometimes they don’t have the means to get it. This is another way for me to do Moschino and not sacrifice quality. It’s a lot more accessible. I love to be able to put my arms around more people and have them be a part of the Moschino family in some capacity."  However, the irony of this was how difficult the collection was to procure, and many people didn't get theirs.  It's a long story and I don't want to tell it, but I will say that the collection's release and sale was an example of how NOT to sell a highly anticipated collection with so little stock.  I think Sephora really screwed the pooch and I feel bad for those who couldn't get their hands on it, especially when you have unscrupulous ebayers selling the goods for over twice retail.  How's that for affordable?  I wish Sephora would do what MAC did when Selena sold out immediately:  make more for another run, and also release it worldwide (as far as I know the Moschino collection was only available in the U.S. and Canada).  It would be silly not to from a profit perspective - obviously lots of folks really wanted this collection so Sephora could stand to make even more money if they re-released it.

What do you think of the Sephora collection and Moschino?  After reading more about the history of Moschino and Scott's current creations I'm pretty enamored of the line and wouldn't mind owning a few pieces. It's kitschy, offbeat, clever but also well-made.

UPDATE: In December 2017 Sephora re-released the collection with zero fanfare.  I guess they didn't want to draw attention to the debacle with the previous release but also wanted to cash in.