I much prefer email for inquiries but am always excited to receive them in any format, so when someone Tweeted at me last year to request any information on the vintage item below I eagerly began searching.  The person who sent the Tweet thought it might be Rimmel, but the name Po-Go was not a Rimmel product as far as I could tell. 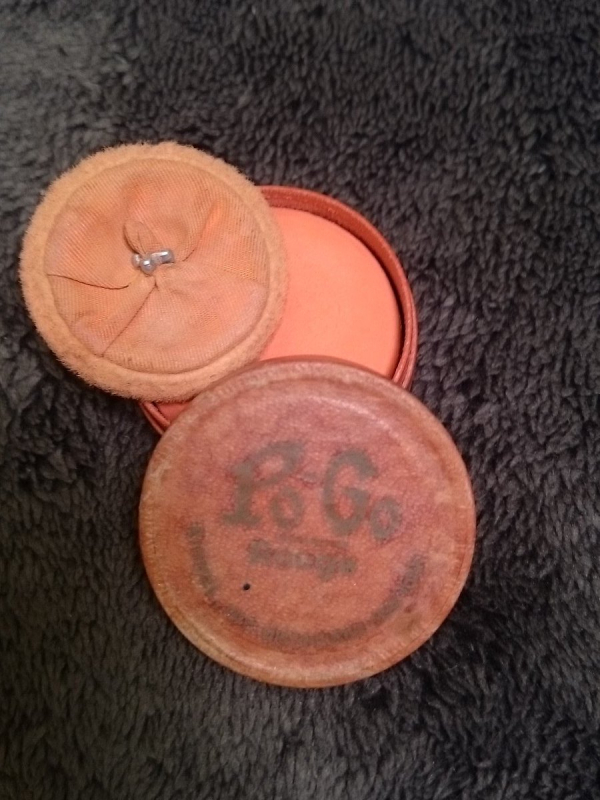 Online searched proved fruitless - I couldn't find any reference to Po-Go rouge whatsoever...until a few months ago when I was researching lipstick tissues at newspapers.com and spotted an ad for Po-Go Rouge in the very bottom corner of an article.  I was so excited to have found something even though it was roughly a year since the poor person had originally Tweeted at me.  I found some basic information, but let me just say up front that definitively dating the various Po-Go Rouge pots I came across in ads and elsewhere proved rather difficult, if not impossible.  Still, I was able to get some clues and can narrow them down to the span of a few years.  Come with me on my research adventure!

I forget what I typed in to Google, but miraculously I came across another specimen at the Museu del Perfum.  Fortunately this item has the back label displayed. 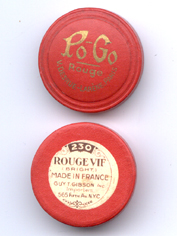 So from there I typed in all sorts of phrases, but the one that got the results I was looking for was "vintage Guy T. Gibson, inc. New York".  Via several perfume blogs I discovered that Guy T. Gibson was established in 1921 by a perfume importer, J.S. Wiedhopf.  The Vintage Perfume Vault explains:  "As a young man, Wiedhopf worked for the Alfred H. Smith Company, who were the only stateside importers of Djerkiss perfume. After he learned the business and perhaps sensing there were more lucrative opportunities, Wiedhopf struck out on his own. In 1921 he started his own business, Guy T Gibson Inc. There he began to import the exclusive Parisian brand Parfums Caron, which he sold to American customers in his New York retail shop. Soon Wiedhopf began offering perfumes under his own label, although the scents were actually being manufactured and bottled by Gamilla in France."  Wiedhopf's perfume brand was known as Ciro, and rarely came up when advertising Po-Go Rouge.  Why Wiedhopf chose a totally different name for the company and why he decided to sell imported rouge along with perfumes I don't know, but as of April 1922 he had set up shop at 565 Fifth Avenue, as shown on the Po-Go label above and this office space ad below. 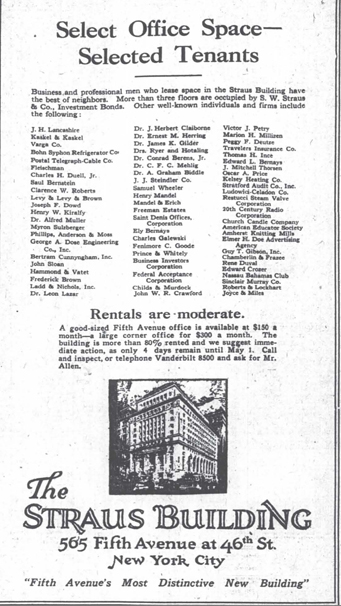 The earliest mention of the product that I found was October 1923. 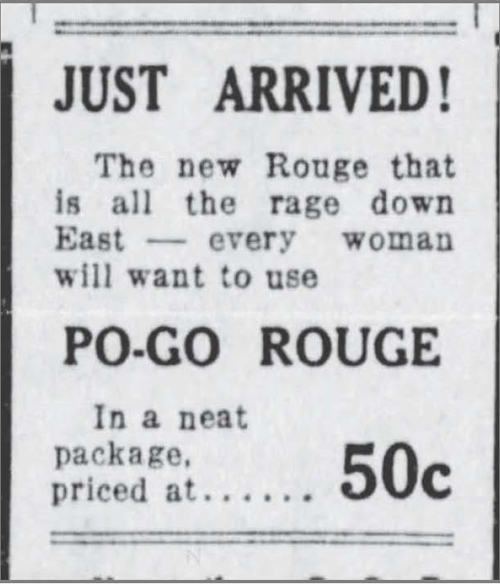 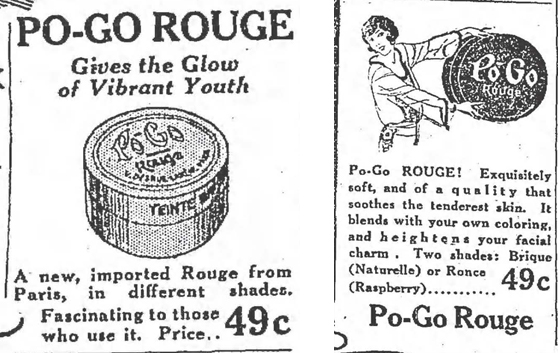 This one is notable for being one of two ads I could find that actually mentions that Po-Go and Parfums Ciro are both imported by Guy T. Gibson, Inc. 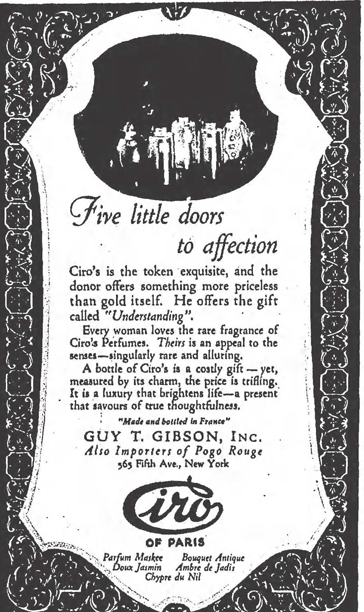 The shade name listed on the one from the perfume museum is Vif, the first mention of which I found was in 1927.  However, what leaves me scratching my head is that the packaging also seems to be different starting in 1927.  The full Paris address is listed on the perfume museum's item, which is consistent with the labels we saw in the 1924 ads, but there was no mention of the Vif shade until 1927...and you'll notice the label below has changed to simply "Paris, France".  So how did a container that is presumably dated 1924-25 hold a shade that wasn't introduced until 1927? 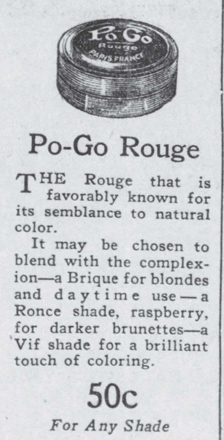 Anyway, the earliest mention of two more new shades (Saumon and Cardinal) was in February 1930.  I just had to include an ad from June 1930 as well even though the text is the same.  How cute is that girl with her little paint palette?!  I'm always looking for ads and packaging that take the "makeup as art" literally, since I think it would make a great exhibition and/or book. ;) 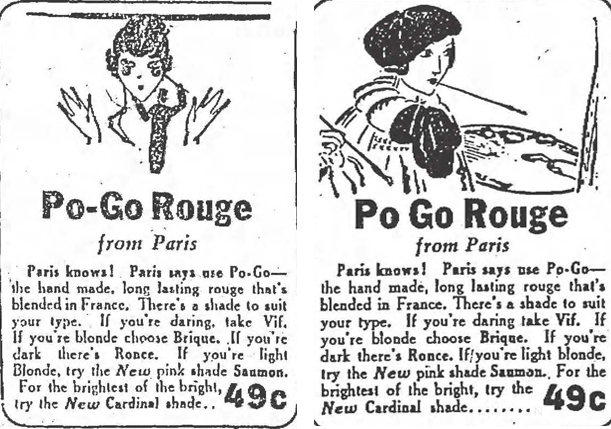 By March 1932 Po-Go had expanded to include lipstick. I don't know what a "Frenchy" case is but it sounds very fancy. 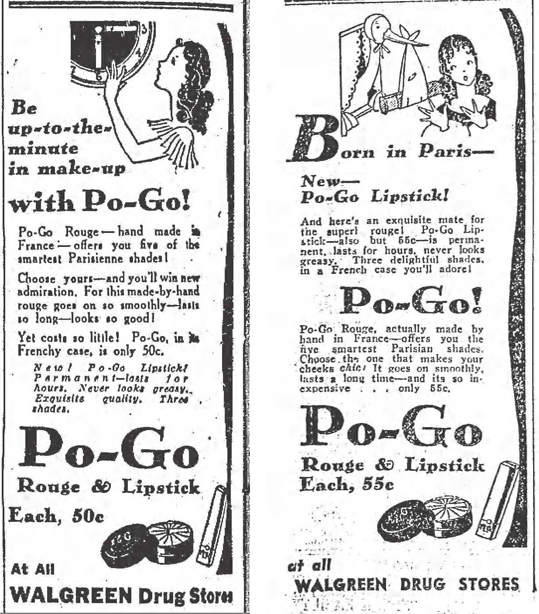 I suppose the reason Wiedhopf branched out into blush and lipstick in addition to perfumes was to capitalize on the already entrenched obsession with French beauty, judging from the ads.  (That would make a fantastic paper or even a whole book, no?  While I was browsing these old newspapers I stumbled across a great news article from February 1923 that talks all about how the fashionable Parisian women are wearing their blush and lipstick and how Americans are so uncouth by comparison...proof that our obsession with "French girl beauty" goes back way longer than we would assume!) 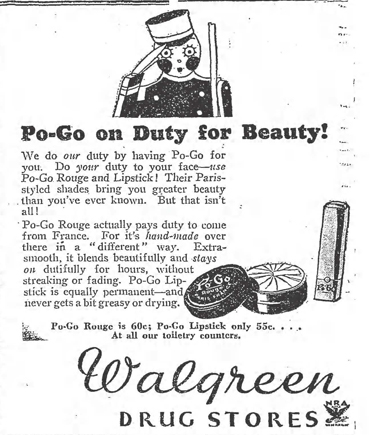 Now you know I was on the hunt for a Po-Go Rouge of my very own.  I've been having excellent beauty luck lately (knock wood it sticks around) and this was just another incredibly fortuitous find.  It's in pretty darn good shape too - a little wear on the outside but the product itself is totally intact and the puff is unused. 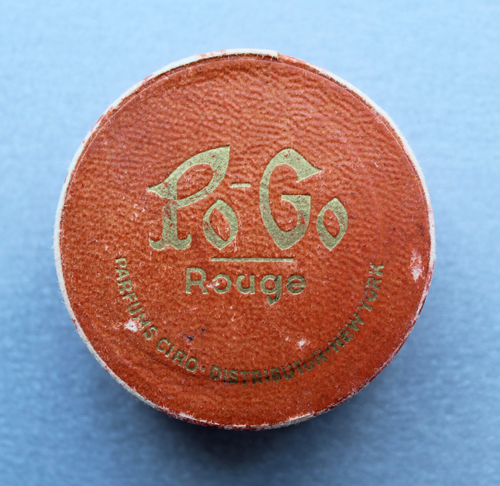 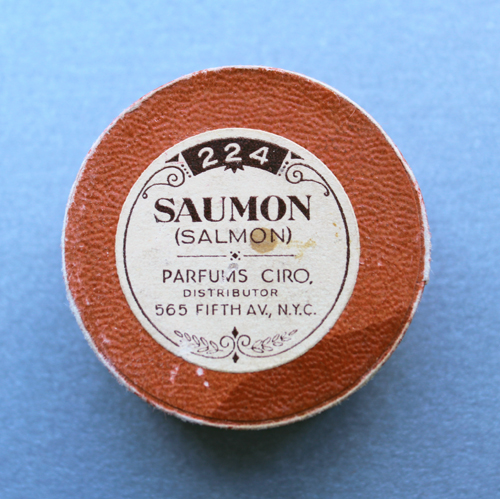 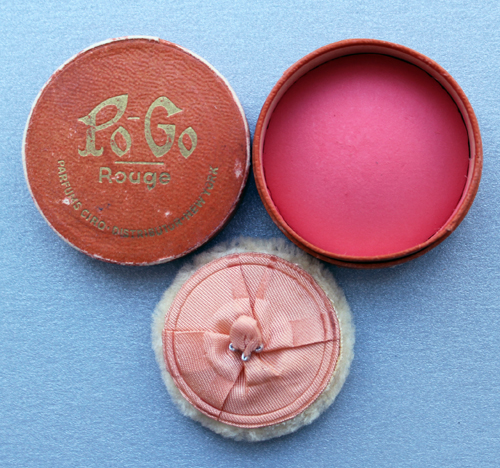 You can see how tiny it is - our blush nowadays are supersized in comparison. 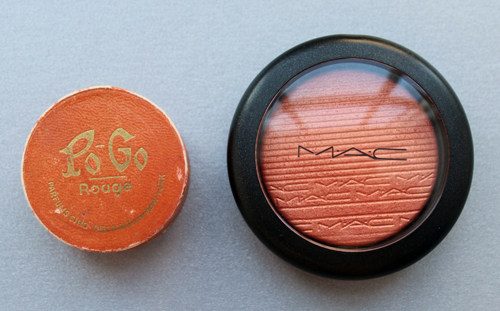 For this lovely addition to the Museum's collection, I was actually able to date it within a few years.  First, you'll notice that the shade name on the back is Saumon, which, as we saw previously, wasn't introduced until 1930.  Additionally, the early Po-Go packages (ca. 1923-25) had the shade listed on the side. 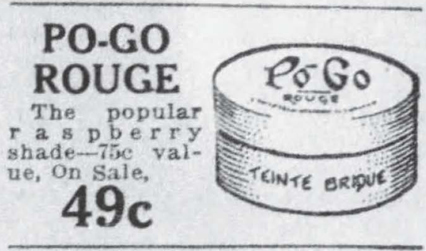 Next, the label on the front has done away with the "Paris, France" and replaced it with "Parfums Ciro, Distributor, New York", while the one on the back also lists Parfums Ciro instead of Guy T. Gibson, which was what the Museu del Perfum rouge label listed.  The Vintage Perfume Vault notes that Wiedhopf officially changed his company's name from Guy T. Gibson to Parfums Ciro in 1936.  This would explain an ad from the same year which notes that Po-Go Rouge is from Ciro. 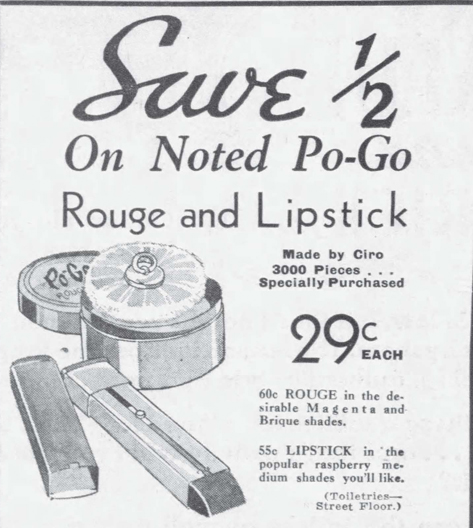 Finally, while Parfums Ciro lasted until the mid-60s, the last mention of Po-Go Rouge I could find in newspapers was from September 1942.  So basically, the Po-Go Rouge I have must date between 1936 and 1942 or thereabouts.  I will say that the puff in the one I have looks markedly different than the one in the 1936 ad, but consistent with the one that was Tweeted and in other previous ads, so I'm not really sure what that means.  In any case, after all this I was dismayed that I couldn't give an exact date for the Po-Go Rouge that was brought to my attention via Twitter, since the biggest clues are the sides and back of the container and the top is too blurry to read.  The text does seem too long to be "Paris, France", so my best guess that it's either very early (with the original Paris address), or after 1936 with the Parfums Ciro label like the one I have, since the text for both of those extend further on each side.  Another clue is the indentation on the front, which is consistent with the one from Museu del Perfum - this may mean it's on the earlier side since the later one I have doesn't have a pronounced indentation.  The color is also a little strange, as both mine and the one from Museu del Perfum are reddish, while the one that was shared with me online is pink.  I'm not sure whether the color has faded significantly or if the container was damaged, but perhaps it was yet another hallmark of a very early version of Po-Go.  This 1929 ads highlights "the gay red box", so it wasn't pink at that point, and the ad copy also implies that there was one colored box for all shades, i.e. different shades weren't packaged in different colored boxes.  (Still love this Parisian artiste!) 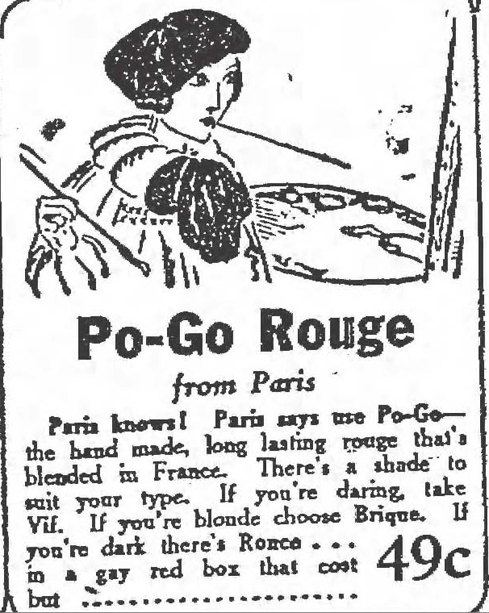 So that's really the best I can do without seeing the back label or making out the print on the lid.  Alas.  While I didn't get exact answers for the request, at least I had a ton of fun poking around newspaper archives and comparing packaging, two of my favorite things!  I did reply excitedly to the the submitter on Twitter and it doesn't seem she's online very much now, but hopefully she'll see this post eventually if she goes back on social media.

Do you agree with my assessment?