Book review: Cosmetics and Perfumes in the Roman World 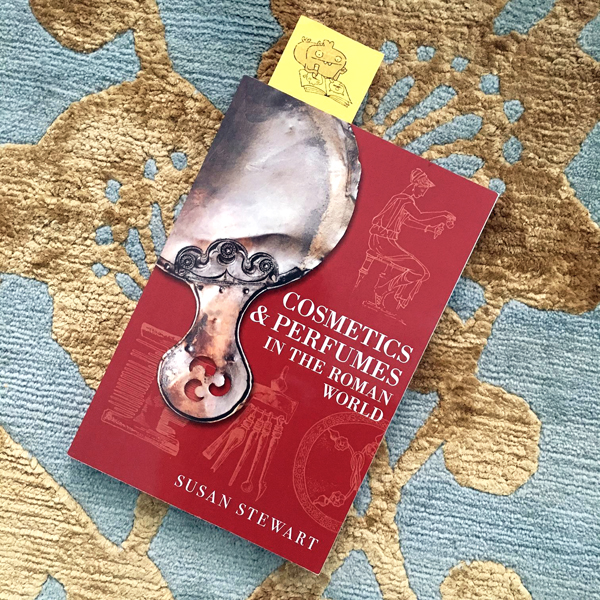 I don't know how this tome managed to slip under my beauty book radar.  I wasn't aware that this little gem existed until the author followed me on Twitter.  Much has been written about the modern beauty age (20th-21st centuries), but there are not many in-depth resources available on beauty practices prior to that.  Fortunately, Dr. Susan Stewart, an independent scholar and librarian at Scotland's Broxburn Academy, is here to help fill in the gaps.  Drawing on literary texts, visual arts and material objects as primary source material, Cosmetics and Perfumes in the Roman World presents a thorough history of makeup and fragrance usage during the Roman Empire (roughly 1-300 A.D.)

The introduction also serves as Chapter 1, which is an overview of the author's sources, geographic areas and time period that are covered - basic but necessary.  Chapter 2 is probably my favorite, since it summarizes the ingredients used in cosmetics as well as the beauty ideals of the time.  Empresses and mythical goddesses set the beauty standards that most women aspired to.  Unsurprisingly, the key beauty goals for women were identical to today's - clear skin, large eyes and silky hair.  And lest you think our obsession with a youthful appearance is a fairly new scourge, this chapter highlights several recipes for wrinkle creams and hair dyes. Even some ingredients haven't changed much; mascara and brow filler were made from soot, which is almost identical to what we think of as the first modern mascara concoction.  Stewart also notes that most of the recipes and techniques date back even further, as the Romans borrowed them from the ancient Egyptians.

Chapter 3 tackles the health and hygiene aspects of Roman beauty products.  While I prefer reading about actual face paint, this chapter is important since it provides the foundation (see what I did there?) for understanding modern cosmetics.  Since its infancy the beauty industry has linked good health with attractiveness:  glowing skin, bright eyes, a pleasant scent and white, even teeth are all still considered markers of beauty.  If one was beautiful and smelled nice they must be healthy and vice versa.  "One's appearance in general is improved by good health and reflects good health; making health a constituent of beauty and beauty in turn a constituent of health" (p.51).  One of the most interesting pieces of proof of this belief among the Romans were the images of Venus commonly displayed at bath houses.

Whereas the previous chapters laid out the what and the how, the next two chapters examines the who and the why, i.e. the differences in use of beauty and hygiene products based on gender, race and class power structures, along with society's perception of women who used cosmetics.  Needless to say, by and large women were heavily critiqued for wearing makeup for the same reasons we see today.  "A woman displayed her inferiority by feeling compelled to improve upon her appearance, her weakness by being tempted by luxury (in the form of expensive beauty products), her obsession with sex by trying to make herself attractive to men other than her husband, her deviousness by disguising her true appearance with makeup and finally, her idleness by having too much time to spend on personal grooming" (p.65).  Once again women who wear makeup are vain and shallow, and women generally were expected to look perfect but not use any beauty aids.  Same old story, right?  Sadly, it wasn't really any better for men; Stewart notes that men who were overly prettified by society's standards were seen as effeminate and unfit to perform traditional men's work. Despite all of these negative perceptions, literally hundreds of makeup/perfume containers and application utensils have been recovered from Roman ruins over the years, which serves as hard evidence that most people engaged in beautification and grooming practices.  However, while these items were widely used, class played a significant role in the types of products and their application.  As was the case in the early 20th century, a more "natural" look achieved with higher quality ingredients was a mark of the middle and upper classes, while heavy makeup and scent made from cheap, readily available sources were associated with prostitutes (obviously, since the latter couldn't afford more expensive beauty products.)

The last chapter explores the notion of luxury as it relates to cosmetics and perfumes during the Roman empire.  As noted previously, given their widespread use among different economic classes, most beauty products weren't luxury items. Male philosophers (especially those damn Stoics) believed makeup and fragrance to be highly unnecessary and therefore luxury goods, but physical evidence suggests this wasn't a widely held view.  While empresses and other high-class women used only the "good stuff" made from extremely pricey ingredients, there were many options available at all price points.  And this range isn't reflected only in the ingredients but in the containers as well; everything from silver, bronze and clear, colorless glass (high-end) to blue-green glass (the most inexpensive type of container) was used to store beauty products.

All in all, this is a well-researched and fascinating read, and most importantly, it's accessible for the masses.  Despite all of the classic literature and art history references, Stewart makes it easy for non-academics to understand.  The information is presented in a straightforward yet compelling manner, i.e. there was no boring, bland spouting of one fact after another but rather a narrative that flowed from describing the basics (makeup ingredients, utensils, etc.) to more complex ideas (the cultural and political climate that influenced why and how they were used.)  Also, even though I shouldn't be, I'm amazed (and a bit sad) by how little things have changed; beauty standards are still more or less the same as they were 2,000 years ago, despite current efforts to diversify them.  My only critique is that I would have liked to have seen more photos rather than illustrations.  The drawings were able to communicate the ideas and objects well enough, but they lacked the visual impact photos would bring.  I'm assuming museums wanted exorbitant fees to use their photos so the author had no choice but to use illustrations.

Will you be picking this one up?  Oh, I almost forgot - Stewart has a new publication on cosmetics history coming out in December, which obviously is already at the top of my Christmas list.  ;)  Keep your eyes peeled!