Wrapped up in books: Olympia Le-Tan for Lancome, revisited

Lancôme has teamed up with a number of fashion designers in the past and this fall they're giving one of their previous partners another collaboration.  You might remember French designer Olympia Le-Tan's beautiful, but largely unaffordable, lipstick book set from 2013.  Perhaps Lancôme realized that the $1,500 price tag wasn't attainable for most and decided to grant us peons a chance to get our impoverished mitts on another Lancôme collection designed by Le-Tan.  Whatever the reason, I'm glad Lancôme revisited Le-Tan as a collaborator and offered a more affordable collection that still represents Le-Tan's signature quirky, literature-inspired style.

If you're not familiar with Le-Tan, in a nutshell she is a London-born and Paris-bred designer - and daughter of renowned illustrator Pierre Le-Tan - who came up with the genius idea to recreate vintage book covers in clutch form.  While this may not initially sound like a novel idea, what makes these minaudieres so special is their rendering in embroidery.  Surrounded by her father's classic book collection and having learned embroidery during her teenage years from her grandmother, Le-Tan combined these inspirations to make one-of-a-kind pieces.  Rather than bland reproductions of random book covers slapped on a bag, these are pain-staking, handmade creations that reflect Le-Tan's personal relationships with books and art.  In other words, I get the sense they're not chosen at random, but are carefully selected based on the meaning they hold for the designer.   The embroidery itself is notable for the fresh, modern treatment provided by Le-Tan.  Not to sound ageist, but when I think of embroidery I typically associate it with old lady frumpiness.  Le-Tan thoroughly updates the embroidery craft to give it a more youthful and fashionable spin.  The Curator hopes someday to own one of these clutches for herself, but in lieu of that, right now I can have these beauties from Lancôme.  Before we dive into the collection, let's take a quick peek at what Le-Tan's been up to since last time.

Her latest collection for fall 2017 is an ode to Hitchcock.

Some other highlights include a take on crazy 60s psychedelia design for spring 2017, a return to classic book covers for pre-fall 2016, the elementary school-inspired spring 2015 collection, and a delightful maritime theme for spring 2014.  I know of some sailors who would love it. ;) 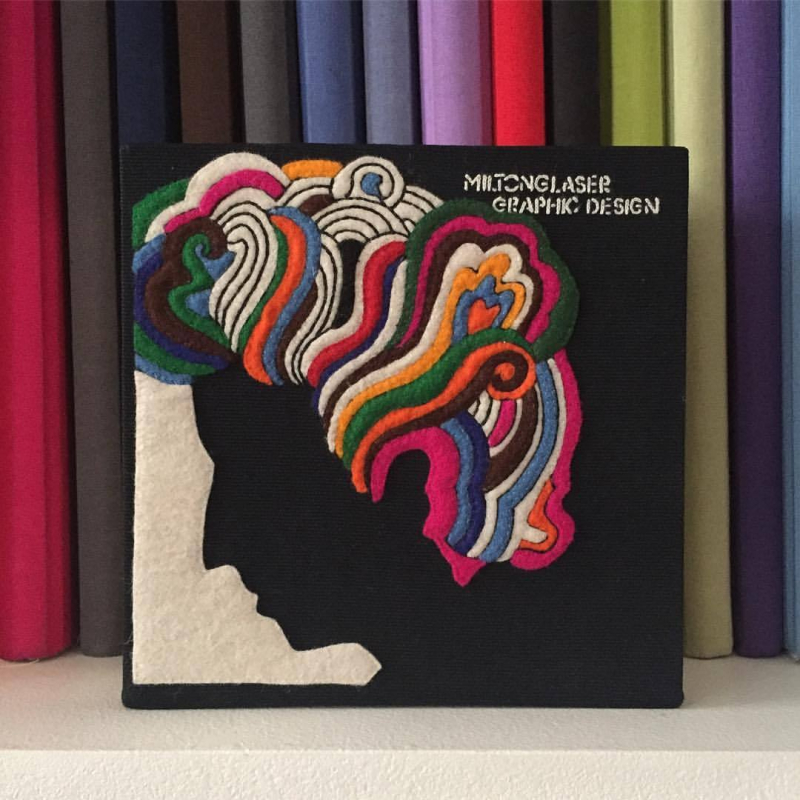 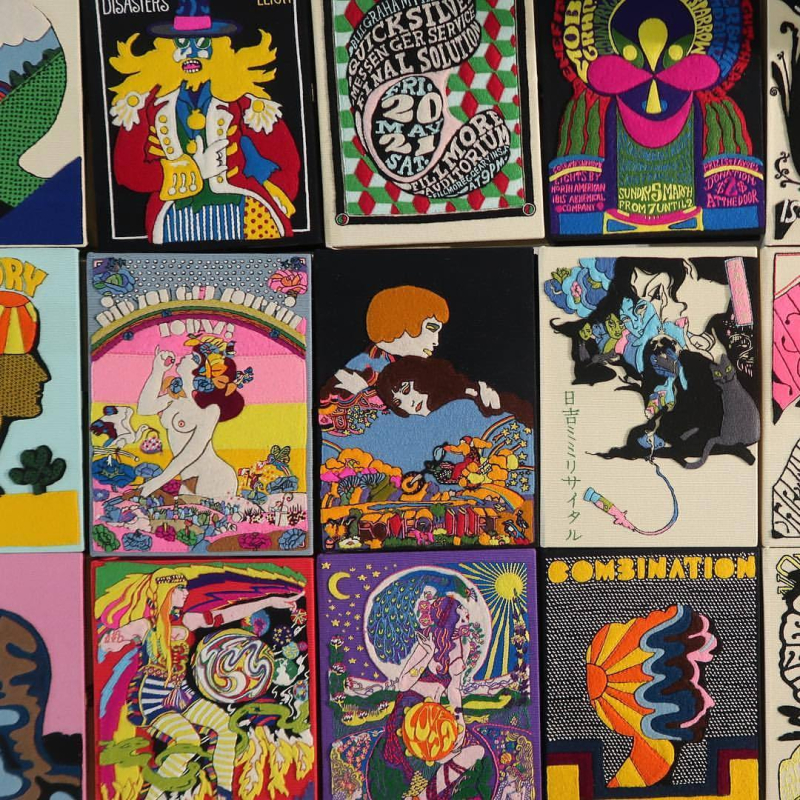 I'm in love with this beaded upgrade to the squiggly pattern of traditional composition books.  Something that I normally saw as fairly ugly and mundane is elevated to a beautiful objet d'art. 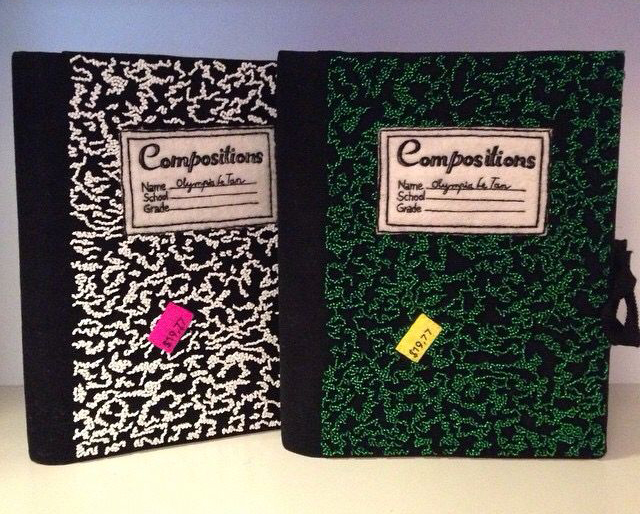 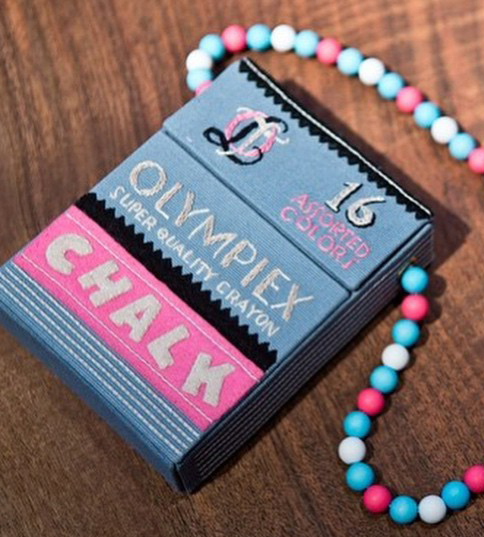 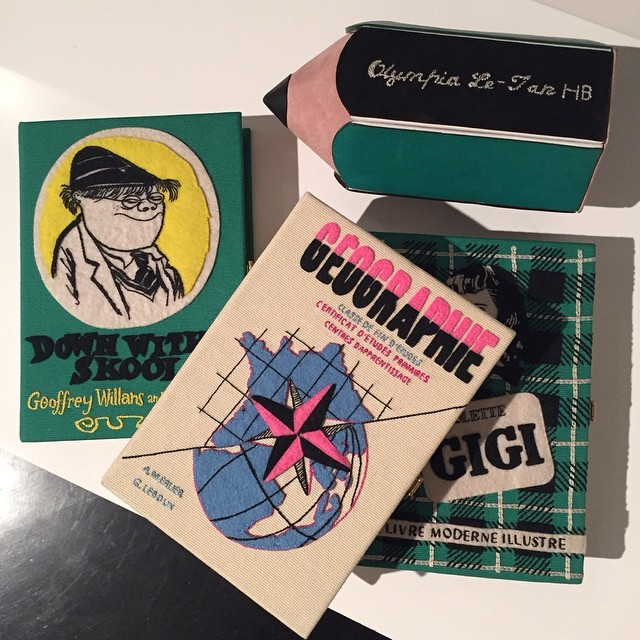 My favorite since we last looked at Le-Tan's work though is the "Framed" collection from fall 2016, which consists of art history classics translated into gorgeous embroidered bags.  Yes please! 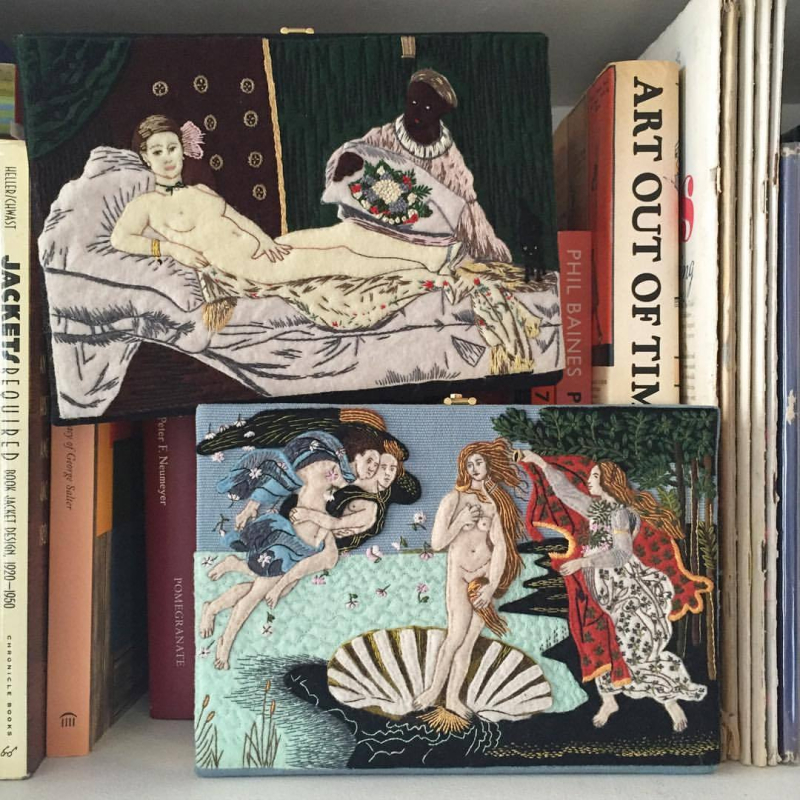 Now that you've seen some of Le-Tan's newer work, let's get to the Lancôme yumminess.  The collection consisted of nail polishes, the brand's relatively new Matte Shaker liquid lipsticks, a palette, cushion compact and several of the classic L'Absolu Rouge lipsticks in the shape of...wait for it...a pair of lips!  So meta.  And so cute! 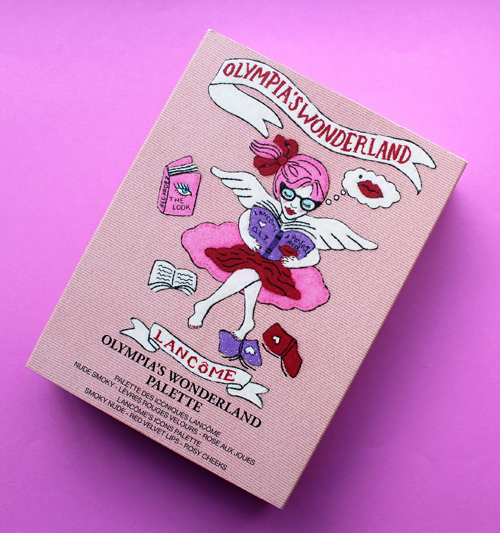 I love that the palette came in its own dust jacket, just like a fancy first edition of a beloved book. 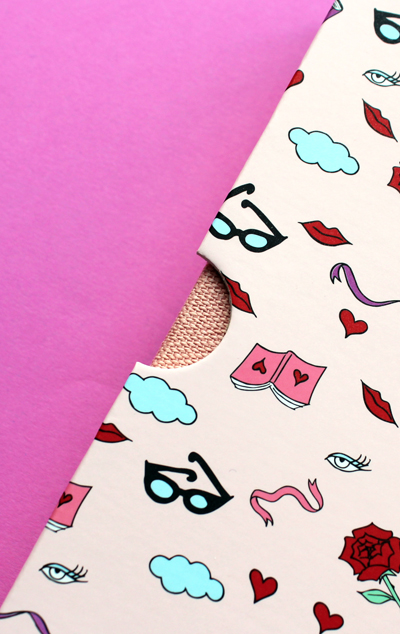 The embroidery is pretty spectacular.  I know it's obviously not hand-made like the actual bags, but it's very nicely stitched.  I'm not sure whether my photo conveys that it looks much more expensive than it is.  Le-Tan notes she's proud of "how beautifully the make-up palette is made," adding, "I didn't think we’d manage to create such a pretty piece made of embroidered fabric...in all the collaborations I’ve done so far, this is the first time we’ve managed to produce an embroidery. It really does look just like one of my minaudières." 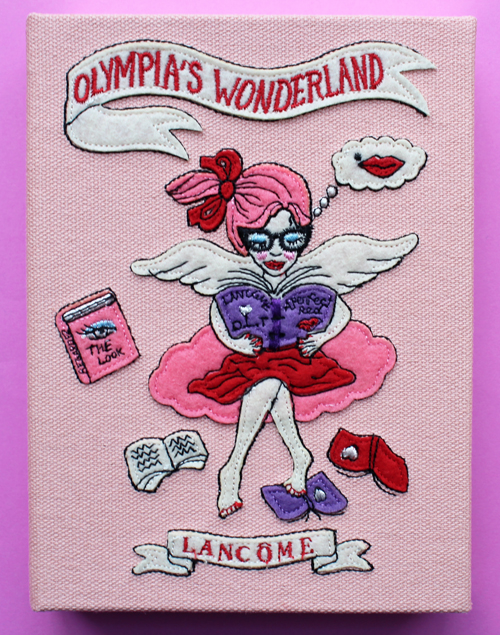 As she did with the previous Lancôme collection, Le-Tan dove into the company's archives (so wish I could!) to get inspiration for the various motifs on the packaging.  While the floating lips are consistent with the former collection, this time around Le-Tan was also quite smitten with the brand's cherubs, which represent the makeup branch of Lancôme.  She explains: "There are always interesting things in the archives of any Maison. And since the Lancôme brand has such a long history, I couldn’t resist delving into it. The idea behind my brand is – among other things – to reinterpret the design styles of the past and add my own personal touch. I like to build on something rather than start from nothing. That gives me more layers of storytelling to work with. In this case, there was this little cherub that I wanted to reinterpret – by making it more feminine, for a start."  From there she designed, appropriately enough, a bookish, girly angel blissfully lost in a tome about Lancôme.   The scrolls are a great touch, since they also figured prominently in Lancôme's early advertising.  I've included some examples below for your viewing pleasure...or, I guess, mostly for me since you know I can't get enough vintage makeup ads. :)  Meanwhile, the rose is a nod to Lancôme's official symbol for their perfumes. 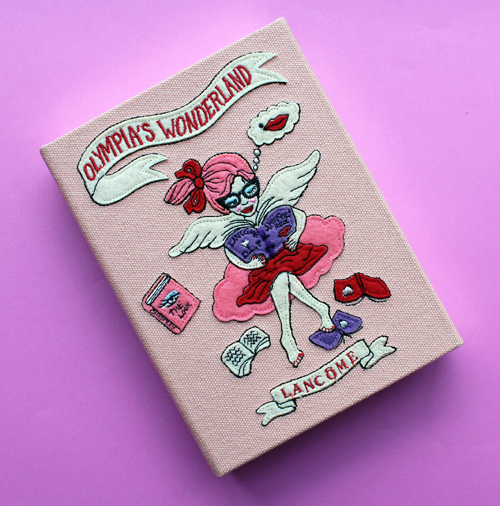 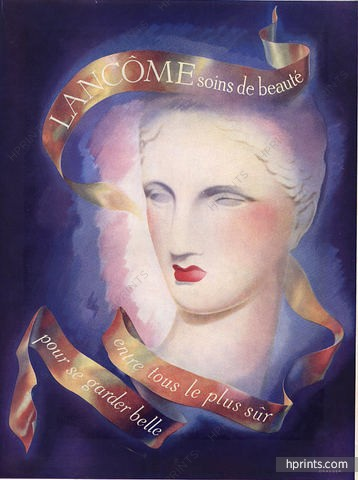 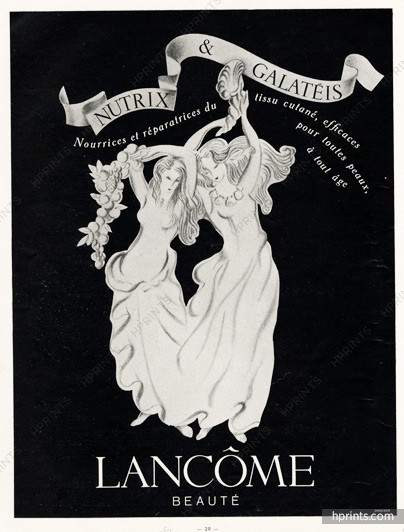 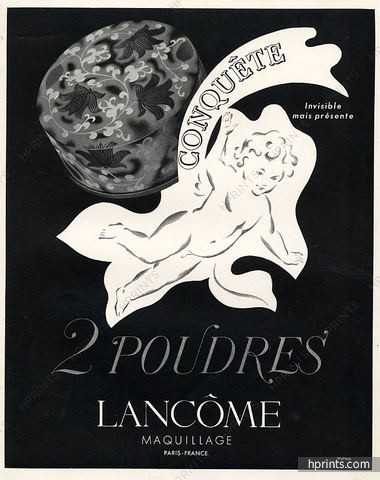 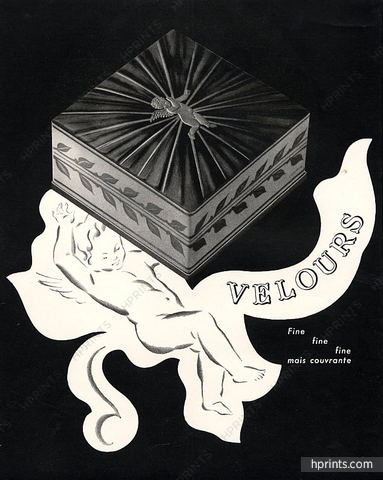 As for the colors in the palette, the selection came easily to Le-Tan: "Usually when I choose a theme, I straightaway start thinking about what colours would fit with that and it doesn’t take me long to put together a palette. In fact when I worked with Gilles Dufour, I was the one in charge of colours. I have zillions of coloured sheets of felt in my office. I cut bits off the all the ones that make me think of the theme. Then I put them together, I see which combinations work and which don’t... For this collection I did the same thing, I brought together bits of felt in colours I liked and wanted to see translated into make-up." 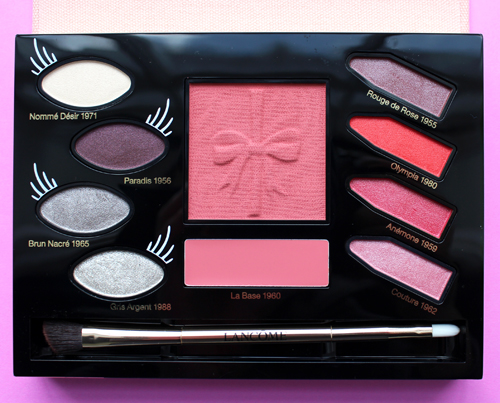 So let's take a look at the lipsticks.  I picked up Rouge Profund 1988, but in hindsight should have also gotten the other shade that was available in the U.S., Olympia 1980.  The others were Rouge de Rose 1955 and Anemone 1959, which didn't seem to make it stateside.  Apparently they were all updated and named after the original shades, but the Olympia one still has me scratching my head.  I had assumed the years following the names were the years they were released, but Le-Tan says that Olympia 1980 was named after the original Olympia shade that debuted in 1949, so I'm not sure where the 1980 part of the name fits.  In any case, all of them are shades of red, which makes sense given the designer's love of red lipstick (which was also apparent in the previous collection). 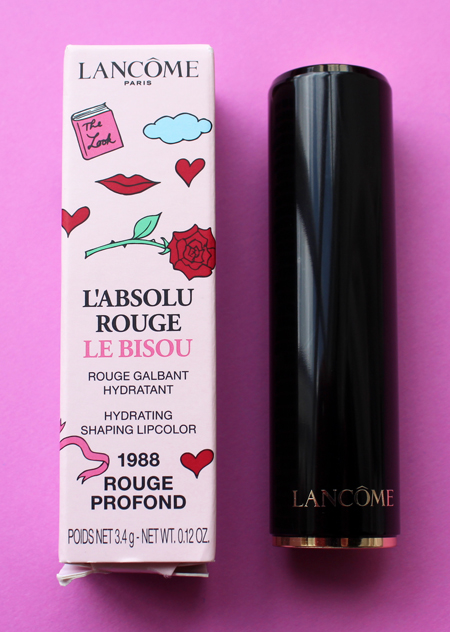 The lip shape is fairly surreal and once again echoes the surreal touch Le-Tan brought to the 2013 Lancôme design. 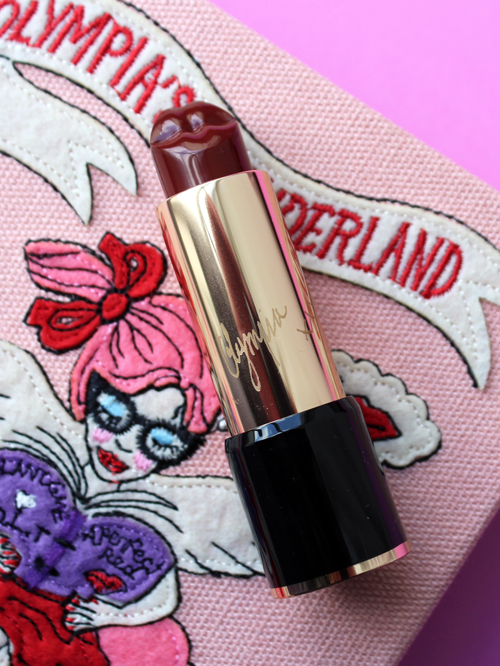 Finally, there was a cushion compact, which also wasn't available in the States.  Fortunately it's mostly the same design as the palette, so I don't feel the need to track it down. 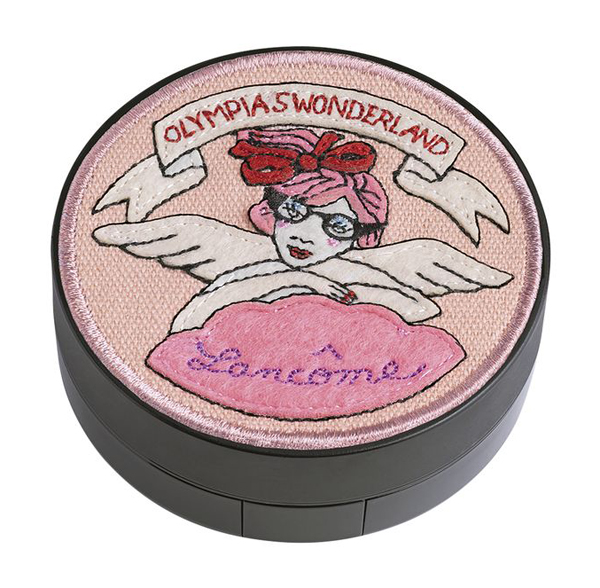 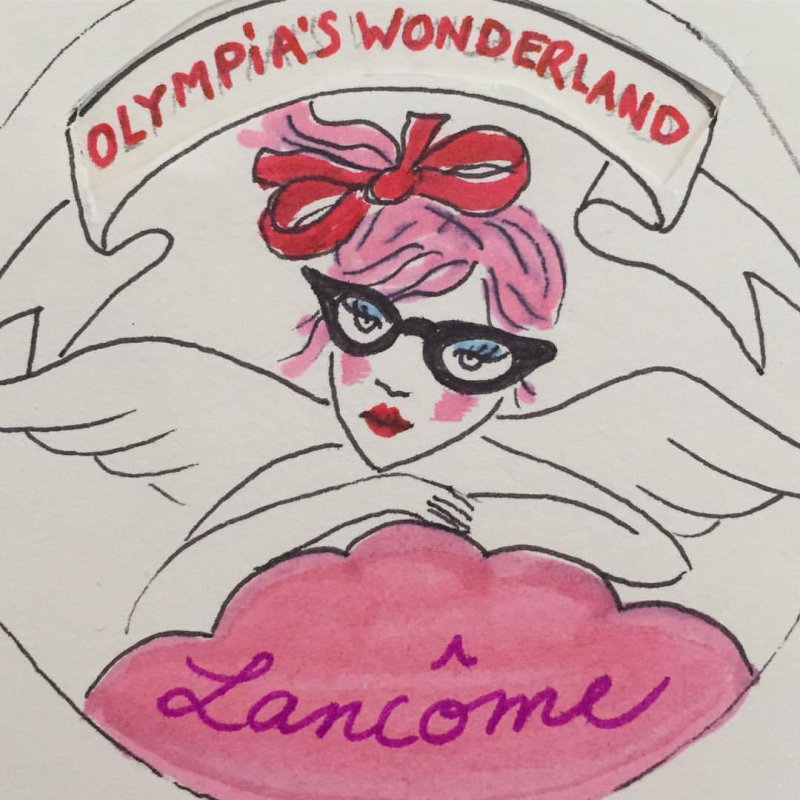 All in all, I think this is a great collection that perfectly combines Le-Tan's unique, whimsical style with Lancôme's vision.   Her slightly offbeat take on certain motifs used throughout the brand's history is truly original and refreshing.  Don't get me wrong, I've enjoyed Lancôme's many variations on rose-embossed powders, but this is something totally new and different from those.  So this collection gets an A from me.