Makeup Museum (MM) Musings is a series that examines a broad range of museum topics as they relate to the collecting of cosmetics, along with my vision for a "real", physical Makeup Museum. These posts help me think through how I'd run things if the Museum was an actual organization, as well as examine the ways it's currently functioning. I also hope that these posts make everyone see that the idea of a museum devoted to cosmetics isn't so crazy after all - it can be done! 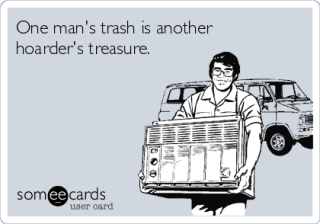 I came across this article detailing an example of an unsolicited museum donation, and it got me thinking about how this would apply to the Makeup Museum. Let's explore the pros and cons of such donations for a cosmetics museum, shall we?

In the 9 years I've been running the Museum, it has received a handful of amazing, completely unsolicited donations, two of which I haven't even posted about because they were so huge and I'm still in the process of adding them to the inventory and photographing everything.  Some very kind people bestowed hard to find or vintage items in great condition simply because they were going to throw them out, but instead they took the time to do a little research and discovered the Museum might be a good place for these items instead of the trash.  I must say I've had good luck so far with unsolicited donations - no one has sent me beauty items that are in such poor condition that they really do belong in the garbage.  (No one has even requested that I reimburse them for postage, which blows my mind!  I've offered, but they all turned me down.)  Even though I usually have no idea what I'm getting when people offer to send me things - very few take photos and just offer a brief description - I have no problem digging through the items once they arrive and throwing them out if they really are trash.  And as I'm always trying to grow the Museum's collection, right now I have a favorable opinion of such donations.  It's not often you can get quality items for free, so these unsolicited donations essentially mean collection growth without spending a dime of my own money.  Indeed, several prominent museums have had help in growing their collections via unsolicited donations as well. As the director of the institutional history division at the Smithsonian remarked in this article, "We built our collection with amateur collectors."

Another pro of an unsolicited donation is that even if I can't use it for the collection, it at least provides research and/or blog post fodder.  I like to think of donations as opportunities for other aspects of museum expansion, as sometimes these items can lead me to look into vintage brands or trends I hadn't explored before, or even exhibition concepts.  For example, the Stila memorabilia donations I received sparked the idea of doing a whole exhibition on Stila girl illustrations.  (Still working on it, obviously!)

Finally, for established organizations unsolicited donations can also lead to good press and increased visitor engagement.  This article in Nonprofit Quarterly discusses an unsolicited donation that a museum could have used as PR opportunity and a way to interact with more visitors (although I do understand why the museum didn't follow through with it).  While right now the Makeup Museum doesn't have any real PR to speak of,  if it was an actual museum I'd absolutely pass along unsolicited donations to my PR team and education/engagement staff and see if they could do anything with them.

Now for the not-so-good aspects of unsolicited donations.  Most museums have policies in place clearly stating that they cannot accept unsolicited donations that are left at the doorstep or sent through the mail, and for several good reasons.  First, and probably most important, unsolicited donations can present a host of legal problems.  State laws regarding abandoned property vary, so museums have to determine whether they can legally own donations that were left or sent anonymously. Not only that, while the donation is monetarily free, the donor may put burdensome conditions in place, such as having the item on display at all times.  This makes the legal aspects of the deed of gift more complicated, and the conditions themselves may be more trouble than the donation is worth.  Plus, some pieces have questionable provenance, especially those where the donor refuses to say how they acquired the item or even give their name - no museum wants stolen or fake works in their collections because, again, this could lead to an epic litigation nightmare.

Second, unsolicited donations require an incredible amount of experience in handling extremely delicate situations.  If a donor is turned down, the result may be a permanently damaged relationship that could affect other donations.  Not only does museum staff want to avoid hurt feelings, as donors can be very attached to an object and may take the rejection personally, but the donor may have something else of value that they are now not willing to part with.  As this Wall Street Journal article explains, "Responding to inquiries for donations requires considerable tact, if for no other reason than a collector offering one unwanted object may have one or more others in which the museum would be far more interested...museum officials attempt to learn something about the person making the offer, because they don't want to close the door on a relationship that might yield other benefits."

Third, unsolicited donations can be logistically difficult for a small museum that doesn't necessarily have the resources to sift through everything that gets left outside their door or in their mail.  Even if the item proves worthy of the museum's collection, the accessioning process takes a considerable amount of time.  Additionally, the museum may not have the storage space or ability to conserve the items. While mostly applauding the unsolicited donation of goldfish to a museum's pond (literally someone just smuggled a bunch of fish onto museum property and dumped them into the pond without consulting any staff), the Nonprofit Quarterly article notes that the fish ended up dead since the pond wasn't the right environment for them.  If a museum can't properly care for a donation for whatever reason, it actually does more harm than good.

Finally, the museum's focus is also a reason that unsolicited donations are tricky to handle.  In the case of the Peabody Museum of Natural History, donated animal carcasses to be taxidermied or otherwise preserved by the museum present a safety hazard if the critters succumbed to rabies or carried dangerous parasites.  On a less deadly side, I'd imagine a fashion museum would have to take special care in ensuring the donated garments are free of moths and other insects, lest they spread to the rest of the museum's collection and destroy it.

In light of all these challenges, many museums have very clear policies in place that help protect them against the potential pitfalls that unsolicited donations present.  As for the Makeup Museum, right now I don't think I really need an official policy, since 1. it's not like I'm getting bombarded with donations so I can handle the amount; 2.  legally I can't get into trouble for accepting items or throwing them out since the Museum isn't an actual institution - it's really a situation of one person gifting items to another.  (At least, I don't think I can be sued or anything like that...any lawyers want to weigh in?)

However, should the Makeup Museum ever become a real organization, it would investigate unsolicited donations on a case-by-case basis and maintain a public policy that all staff is well-versed in.  I'd definitely require a form of some kind to be filled out online and have hard copies available in the case of in-person drop-offs.  I'd also follow the standard guideline that most museums have posted - I might even use this exact language from the Chicago History Museum and the International Spy Museum cobbled together, since it's perfect (why reinvent the wheel?):  "The Museum does not accept donations through the mail or in person unless prior arrangements have been made with the appropriate curatorial or collection staff member. All unsolicited donations sent via the mail will be returned to sender.  The Museum reserves the right to dispose of unsolicited items."  Storage space shouldn't be that much of an issue since makeup items are generally small.  Currently I'm running out of room, but that's only because I'm trying to keep the collection in my home - if I had a large dedicated space, it wouldn't pose too much of a problem (unless the donation was something like salon furniture or oversize props...still, if Paul & Joe wanted to donate those giant cat lipsticks they used for their events, I'd take them in a heartbeat, lack of space be damned).  As for health hazards, I can see that used makeup is kind of gross, but most likely it doesn't pose a threat as the items can be somewhat sanitized and no one would actually be using them - they're just being displayed.  The only things you'd have to be really careful with are hair-related items, i.e., I'd think twice about accepting a used vintage hairbrush or other accessories, as an outbreak of lice is not desirable.

There are many potential issues with unsolicited donations, but I believe that if a museum sticks to their policy and ensures their staff understands it, the benefits greatly outweigh the risks.  As Jody Ochoa, Director of the Idaho State Historical Museum emphasizes, "If we don't know anything about an item, how can we take it? Having a good solid policy is really key, and it protects everyone, including the volunteers."  My current job also forces me to handle sensitive situations on occasion, so I think I'd be equipped to gently and tactfully negotiate or turn down a donation - hopefully there wouldn't be any burning of bridges with donors for me.