Makeup as Muse: the mother of makeup art

Baltimore's City Paper is shutting down, but before they go I was delighted to see this article on a local artist who paints with makeup.  Gloria Garrett calls herself the "mother of makeup art", which I think makes her the ultimate Makeup as Muse.  By complete coincidence, she also happens to live roughly a mile away from me on the same street!  Smalltimore indeed.

Garrett, a 57-year-old artist and mother of three daughters, is entirely self-taught and creates, as she says, "folk art for the folks."  Garrett worked for the National Security Agency for most of her life, but was always drawing on the side - primarily black and white drawings made with pen.  It wasn't until 2005, following the tragic murder of her 18-year-old nephew, that she started painting in color.  From the City Paper profile:  "'I said, 'God, please let me have color in my life,' she says. And then she dreamed that God said she was going to be a painter, but she's allergic to paint. Then her mother gave her some makeup, and a light went off in her head."  Garrett began showcasing her work at farmer's markets for donations.  She would allow people to take her pictures and pay whatever they thought was fair.  Later she turned to YouTube to not only help promote her work but also highlight the work of other area artists and provide tips on marketing.  She also shares videos of her travels and her experiences within the Baltimore art scene.  I love this one, which shows her painting on the steps of the American Visionary Art Museum (a must-see if you're ever in town).  I also love that her photographer husband shoots all of her videos.  Hooray for supportive spouses! 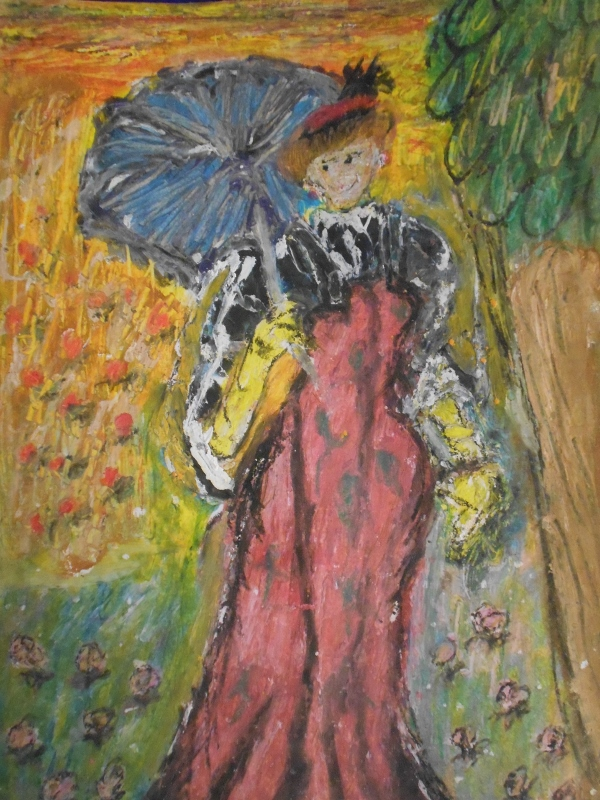 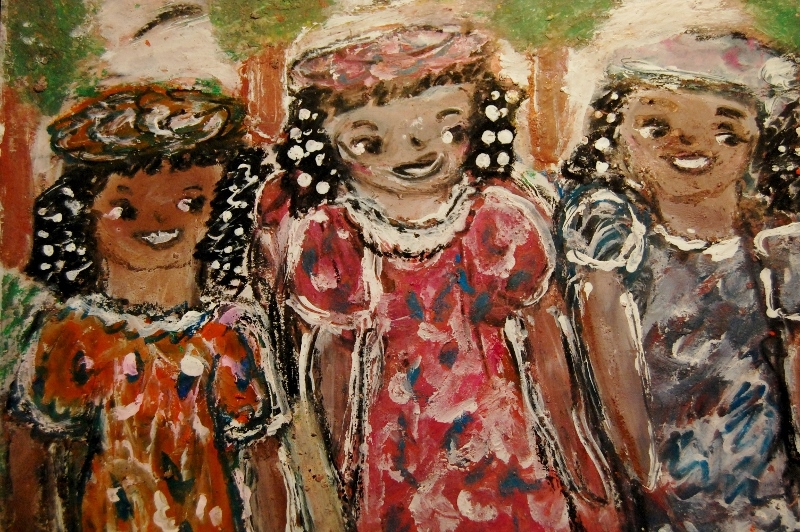 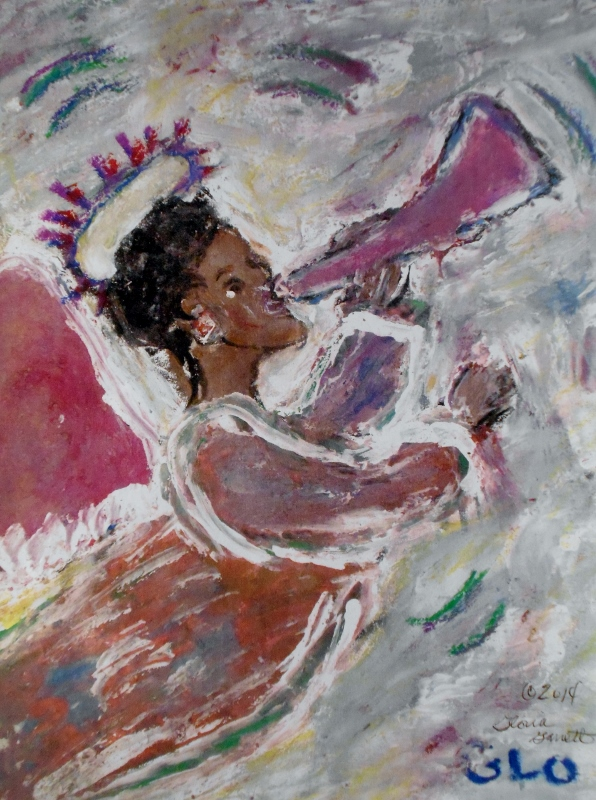 I had my eye on one of these two paintings, as they are relatively affordable.  Alas, when I wrote to her to find out what kind of cosmetics she used (looks like mostly eye shadow, foundation and lipstick to me), my email bounced back.  I am so sad since I also offered to donate some very lightly used makeup and brushes I'm no longer using and asked for a mailing address where I could send a box of items.  I also wanted to see whether she'd be interested in doing a commissioned piece...I was thinking if I sent her a photo of my vanity, perhaps she could make a painting of it with makeup. 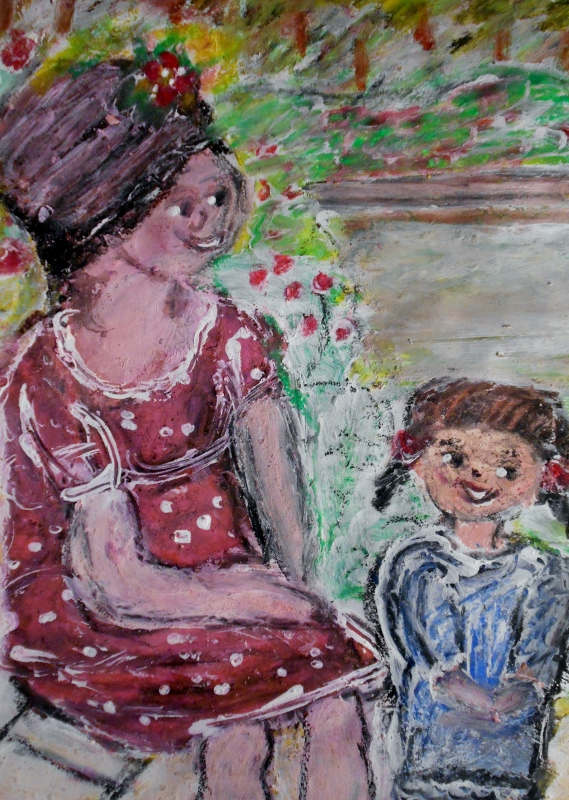 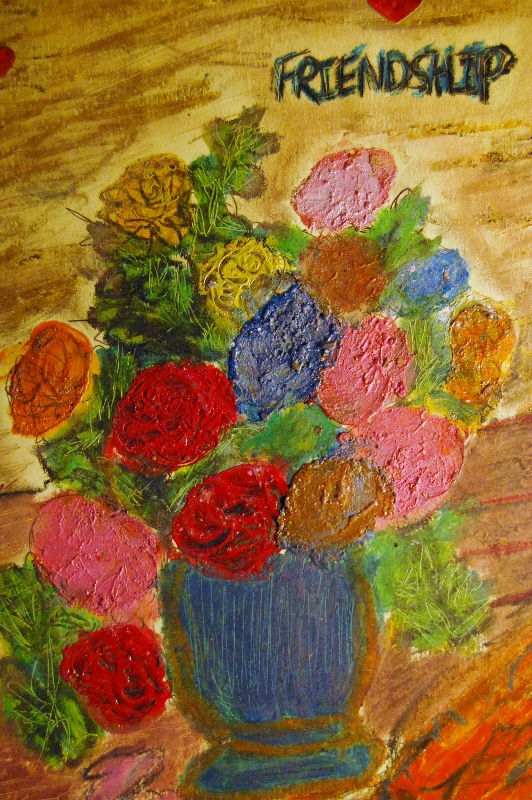 Garrett has adopted a fairly loose application technique in that she often applies makeup straight from the package/tube and uses a variety of simple tools.  Everything from her hands to plastic forks is fair game.  In 2014 she discovered lip gloss, which she likes to add to her paintings on occasion to "give them a shine".  According to City Paper, "She uses rouge, base, eyeliner, crayons—even nail polish. When she paints, she starts putting materials together around 10 p.m. and gets going by midnight. 'And I'm usually not done 'til 10 the next morning!' she shouts, smiling. 'I put my makeup in front of me, my Wite-Out, my crayons, and God works through me.'  She spends hours on the backgrounds, she says, and moves to the faces last: 'I do the face. I put the Wite-Out over it, I say I don't like it, and I do it again. And again. And again!'"  This process of crossing things out and repetition sounds a bit like Basquiat, no?  However, the finished product, stylistically, reminds me a little of various early 20th century artists but with a folk art vibe.  The flowers look a little like some of Emil Nolde's floral paintings, while the figural ones resemble Chagall or Matisse.

To sum up, I'm thrilled that one of the first artists to ever create paintings with makeup is a Baltimore native.  I find Garrett's work to be absolutely charming and unique - her folk art style is very different from that of other artists we've seen who use beauty products as their medium.  And I'm so happy to see that she was able to turn to cosmetics to create the colorful art she wanted to make when faced with the challenge of being allergic to paint.  Makeup saves the day!  I'm just sad I can't get in touch to ask her more specific questions about her artistic process, as my emails keep bouncing back and I also can't find a mailing address to donate some items.  (Garrett is on Facebook but I am not, so that route is out, and there is a phone number listed on her website but my anxiety prohibits me from attempting a call - the phone is way more intimidating for me than email).