Friday fun (or flop?) with Felicia

As soon as I saw this adorable lip balm at various blogs I ordered it immediately from Sephora.  It doesn't really get any cuter than this - a sparkly pink strawberry-scented lip balm in the shape of a flamingo pool float, plus a reference to one of the greatest films of the '90s?!  Yes please. 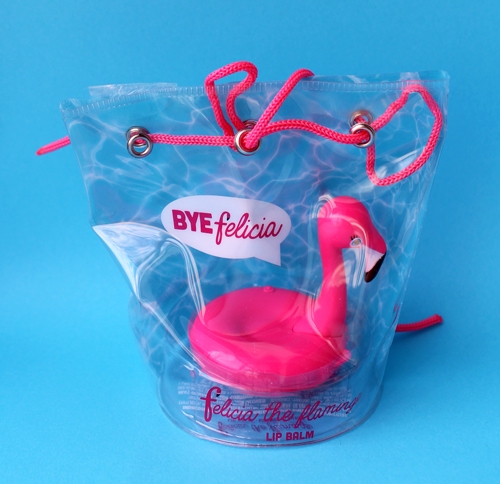 Another precious detail is the flamingo-shaped "F" in Felicia. 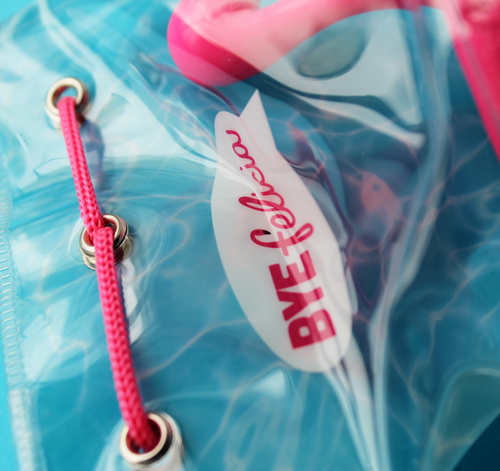 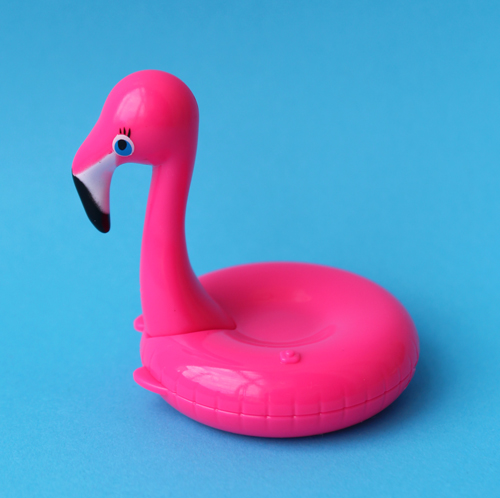 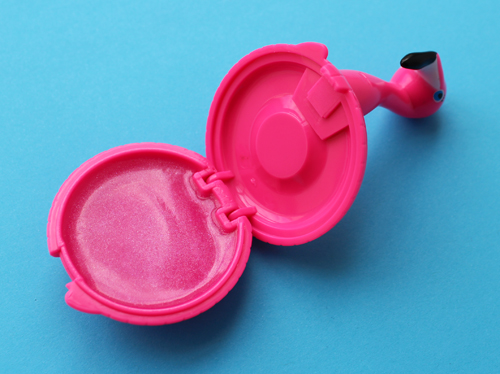 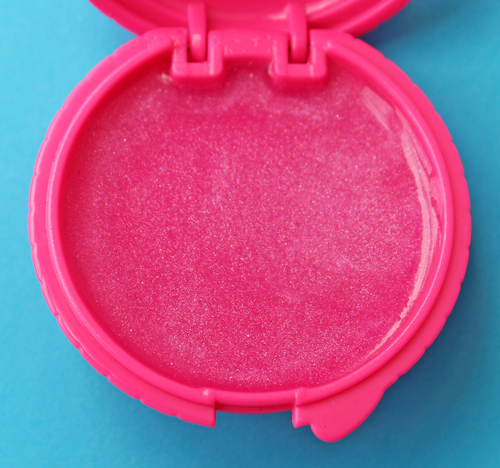 Our mini Babo loved it and asked if I could fill the bathtub so he could take it for a proper spin. 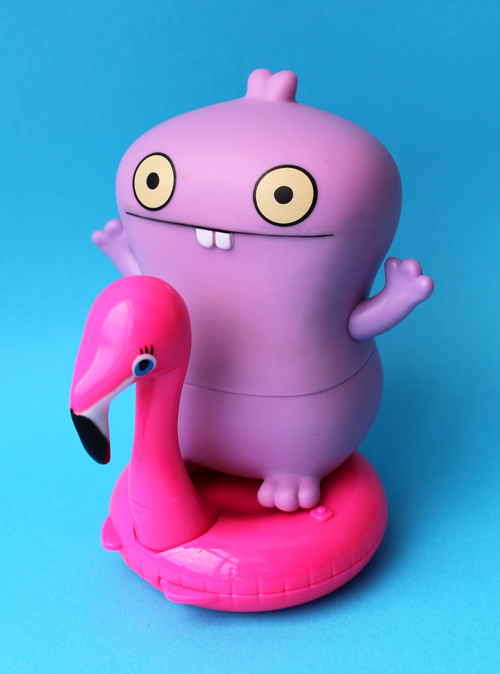 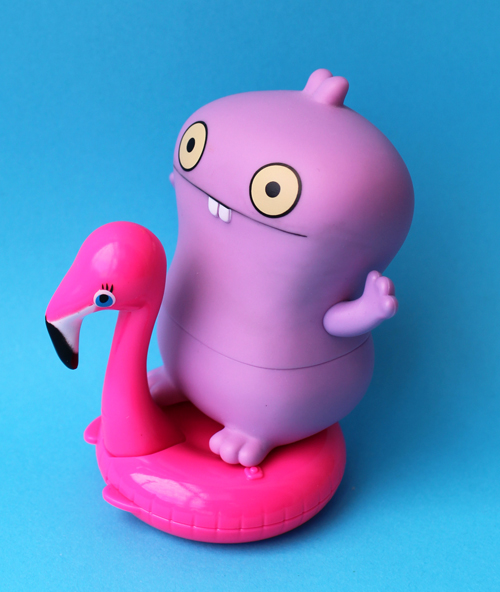 Totally harmless, right?  Alas, this seemingly innocuous lip balm has stirred up controversy: looks like it's another case of cultural appropriation.  If you've spent any time online over the past few years you know that "Bye Felicia" has become a popular meme used to dismiss other interwebz users.  And you may remember how pleased I was to see this phrase take off in numerous other ways, given my love of '90s pop culture and the 1995 film Friday that gave us these two simple words.  The meme was the inspiration for the lip balm, according to Taste Beauty's managing partner Alex Fogelson, who told Women's Wear Daily that Sephora approached them to "collaborate in a really fun, pop-culture-inspired fun and young item."  (Taste Beauty is a relatively new company, having been founded in 2016 by three executives who used to work at Lotta Luv, the brand behind some bizarrely flavored lip balms.)

That seems okay, until you realize that the "Bye Felicia" meme Taste Beauty is referencing with their lip balm may actually be a form of cultural appropriation in and of itself. Let's take a look at the original clip, which, if I'm being honest, still makes me laugh.  (I also love Smokey's "remember it, write it down, take a picture, I don't give a fuck!"  Classic.)

Impeccably delivered, it's a funny line that wasn't even in the script (apparently Ice Cube's son came up with it)...but as it turns out, Felisha is a crackhead.  To a clueless white person such as myself, I thought she was simply an annoying, mooching neighbor.  For "bye Felisha" to take off as a meme, I guess there were other people who accidentally (or perhaps intentionally) overlooked that aspect of Felisha's character.  Or worse, many people using the meme were totally oblivious to the original source.  As this article on white people's inappropriate use of black slang notes, "What’s amazing though is that over the last year [2015] or so, so many white people and non-black people have used [Bye Felicia] (as a sassy dismissal) without actually knowing where it’s from."  Also, the spelling of Felisha's name morphed into "Felicia", I'm assuming to make it more palatable to white people.  As Fayola Perry writes in XPress Magazine, "Cultural appropriation sanitizes and spreads lies about people's culture. It takes away the story of Felisha, the addict who represents and symbolizes so many black and brown women's struggle with drug addiction in that era and makes her a passing internet trend.  This lack of attention to detail can perpetuate racist stereotypes. Someone may think they are paying homage to someone's culture and the person whose culture they're paying homage to is completely offended at the misrepresentation.  Fear not, you can enjoy a great burrito if you are not Latino and do yoga if you're not Indian, but be thoughtful, check your privilege and be considerate of context and history. Everyone has some type of privilege, people of colour appropriate each other's cultures as well. We must all be mindful of our lens, other people's perspectives, the legacy of oppression and try our best to make sure that we are not continuing it. At the very least, know where the appropriated element came from and at the very, very least, spell her name right. It's Felisha, not Felicia."

So while I was overjoyed to see the phrase take off as a meme given how much I love Friday, turns out I should have been aware that it was a form of whitewashing, since it seems that the vast majority of people using it don't know where it originated.  Or in my case, had no clue about the more serious implications of Felisha's character and her dismissal.  In reading more about the history of the film and that scene in particular, I don't think anyone involved with Friday intended the phrase to be perceived as anything other than comic relief, but now I can see how it can be viewed as a microcosm of the bigger issue of black women's needs continually being ignored.

In turn, if we're arguing that the meme itself is a form of cultural appropriation, then the lip balm is as well, since it's directly referencing the meme and obviously not the original source.  I mean, Felisha didn't wear makeup1, and flamingo-shaped pool floats didn't make an appearance in the film as far as I know - this lip balm really has nothing to do with Friday.  A succinct reaction comes from this Twitter user:  "It's time for black brands to start monetizing our shit. But we're not corny enough to slap bye Felicia on some lip balm all outta context."  Blogger Aprill Coleman explains further: "Felisha was an accurate representation of black culture in the early 90s on the heels of the crack epidemic. Taste Beauty’s use is completely out of context. Felisha is an African American, crack-addicted character that did not wear makeup, whereas Felicia is a brightly colored flamingo shaped like a pool float. A tiny part of my black American culture was appropriated, reinvented, and packaged into a strawberry scented balm for profit."  Coleman also astutely points out that two of the three Taste Beauty founders are white men, so it's possible that the company, like so many others, wasn't fully aware of the phrase's origins; they just saw the meme and thought an alliterative novelty lip balm with the same name would be marketable.   And if Taste Beauty did know where it came from and still wanted to go ahead with the product despite the potential for offensiveness, perhaps they could have donated a portion of the sales to Angie's Kids. This is a nonprofit founded by Angela Means, the actress who played Felisha, that focuses on health and early childhood development. (Side note:  I would seriously love to get her thoughts on this.  She seems okay with the phrase's popularity but I'm not sure about the lip balm.)

So where does that leave us?  Well, on a personal level I feel like a jerk for buying it and also for not understanding, quite literally for the past 3 years, that the "Bye Felicia" meme was actually white people appropriating yet another piece of black culture - I honestly thought it was a widespread, '90s-nostalgia-fueled, long-overdue tribute to Ice Cube's legendary diss.  As someone who sees herself as a feminist, which means being aware of the struggles of WOC, my ignorance is rather troubling.2  As for the item's inclusion in the Museum's collection, I will likely not display it unless I'm doing a more educational exhibition on cultural appropriation in cosmetics.  In addition to the ads explored in my 2013 post on the topic, sadly there are tons more examples since then that could be provided.

What do you think about all this?  Have you seen Friday and if so, do you find the "bye Felisha" scene funny?

1 Interestingly, the actress who played Felisha cites the makeup artist on set as the one responsible for helping her fully inhabit Felisha's character.  The somewhat haggard look was entirely intentional.  She notes in an interview:  "What was funny was when I got on set the makeup artist looked at me and she was like, ‘O.K.,’ and she kind of went with my look and when we got to the set (“Friday” director) F. Gary Gray looked at me and was like, ‘Whoa, whoa, wait, wait. She’s not a beauty queen.’ I give the makeup artist so much credit for helping me create Felisha...So when I got in the makeup artist’s chair, once Gary said, 'No, she’s a hoodrat,' we went back to the drawing board and I fell asleep. But when I woke up and saw myself, it clicked. It helped me go there."

2 Equally problematic is that I've been rewatching the clip and still think it's hilarious - proof that white privilege is real. I'm able to ignore the broader issue of dismissing black women and perceive "bye Felisha" as comedy.
Save

Posted at 10:56 AM in Feminism, Fun, Other makeup brands | Permalink | 0 comments