Off to Umbria with Fresh

As with Fresh's collaborations with Jo Ratcliffe and R. Nichols, this was quite a nice little surprise.  The company teamed up with renowned Italian ceramic house Rometti to create limited-edition packaging for their Umbrian Clay Mask.  I can't think of a more appropriate company to produce the design, as Rometti is not only based in Umbria near where the clay for Fresh is sourced, but obviously pottery-inspired limited edition packaging for a clay-based mask is perfect. 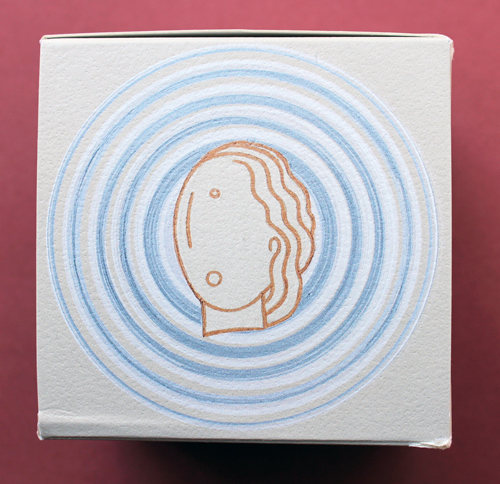 Why the clay mask to get the artistic treatment?  Fresh co-founder Alina Roytberg explains, “The Umbrian Clay Purifying Mask is one of our most iconic products. The mask is truly amazing, because it can be used on all skin types without drying out the complexion. When the product first came out, we didn’t launch it in a big way, and we’re very excited to do that now and be able to share the rich history behind the ingredient.”  The Umbrian Clay line was first launched in 2000 after Roytberg witnessed the amazingly clear complexion of a Rome-based friend who previously struggled with acne - the clay she found in a local store had done the trick.  Roytberg tracked down the source of the clay, which is a small town in Perugia called Nocera Umbra, and from there the Umbrian Clay line was born.  The clay has been used literally for centuries to treat various skin concerns and is a renewable resource that's mined ethically by Fresh. (You can read more about the production process here.) 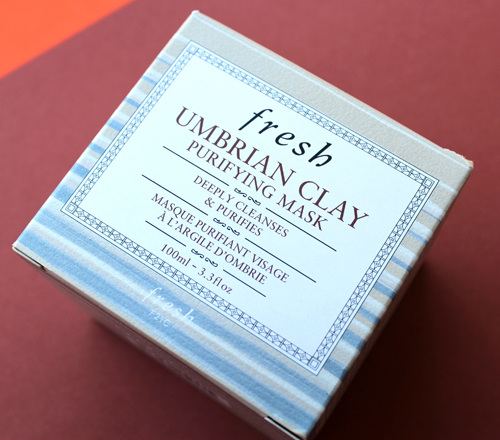 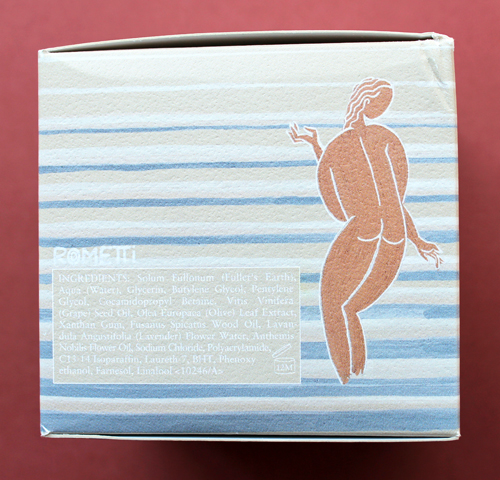 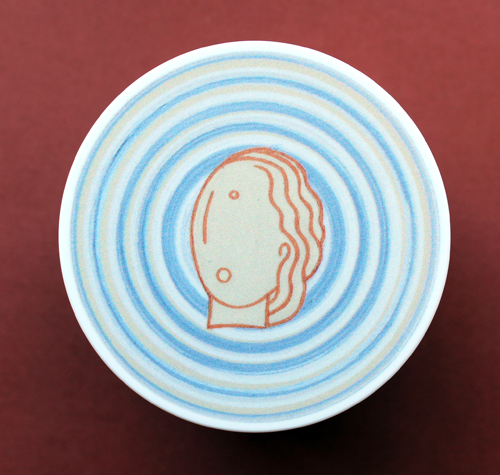 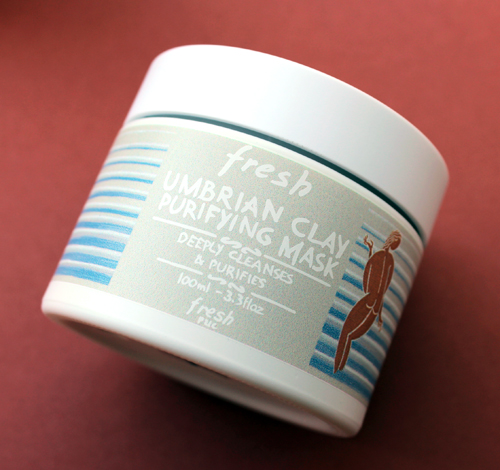 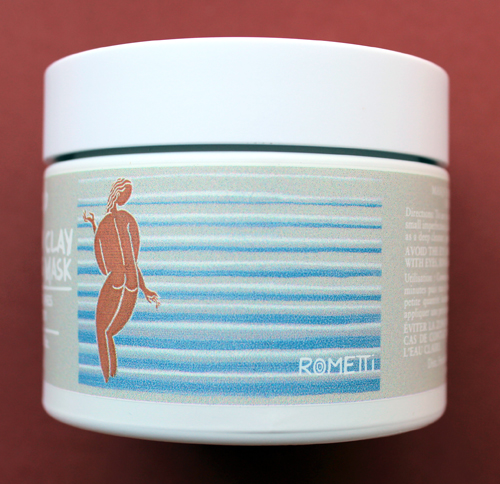 As for the design, Rometti Artistic Director Jean Christophe Clair says that he was inspired by all of Umbria, from its natural elements ("rivers", "hills" and "sunsets" were his key words) and architecture to its status, as he puts it, "the center of the history of Italy." The soft colors Clair used reflect the region's blue skies and earthy terracotta hues of the clay.

Rometti is a 90-year old company that's known for being the first Italian ceramic house to put a more avant-garde style on their wares as opposed to traditional Italian Renaissance and Art Nouveau designs.  Most of the early pieces were produced in conjunction with artists Corrado Cagli and Dante Baldelli.  I wasn't familiar with either of those two names, but apparently Baldelli was a nephew of Settimio Rometti, one of the company's founders.  He attended the Academy of Fine Arts in Rome where he met Cagli.  Along with a host of other artists, including Futurist Giacomo Balla (love the Futurists!), they "were given complete freedom to experiment their artistry."  The Fresh collab maintains this tradition of artistic freedom today, as the company gave Rometti "free reign".  The design process came about easily, which is not surprising given that the mask is a product that comes directly from Rometti's everyday environment.  Says Roytberg, “It was one of those incredible things where you communicate without over-communicating because the response, for [the Rometti owners], it’s natural—they live in this world, they work with clay under the sky—so it’s one of those transcendental things that just happens."

While Clair created a unique new design for Fresh, it's clear he was continuing in the footsteps of Cagli and Baldelli, which you can see below in some examples of their work.  What's notable about these is the modern style given to traditional decorative themes, e.g. mythological scenes, farming, fishing, etc. - they're a far cry from, say, ancient Greek vases or majolica.  I'm including just a few pieces here but if you're finding yourself head over heels in love with Rometti's work, here's a whole book to drool over. 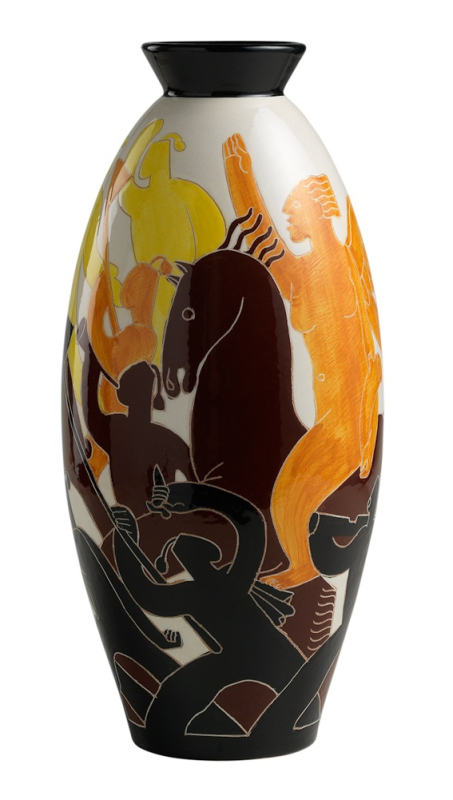 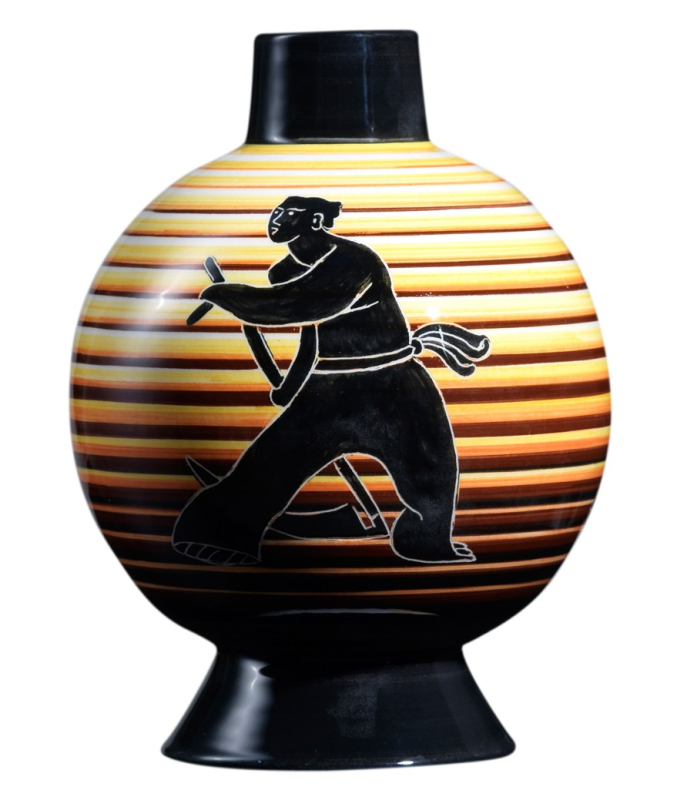 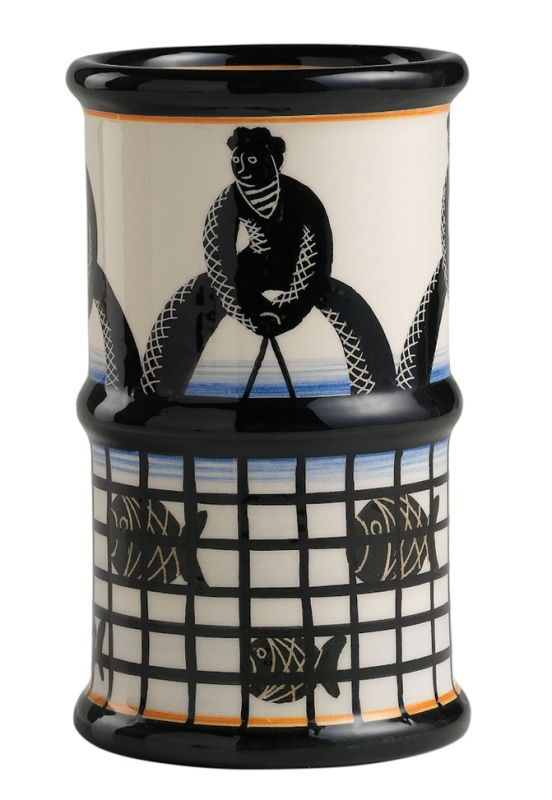 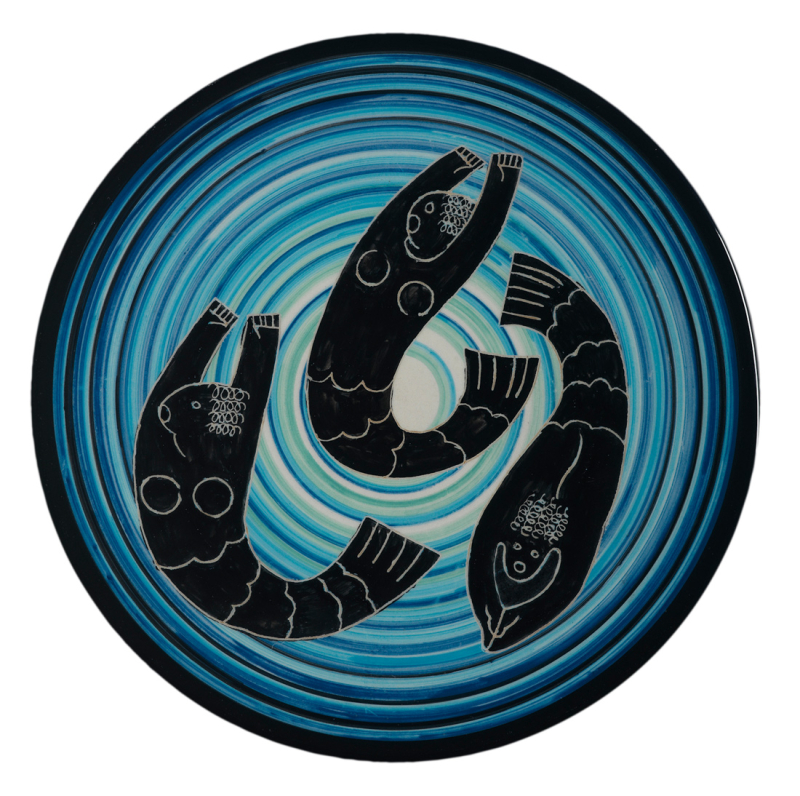 I love this jellyfish-topped vase. 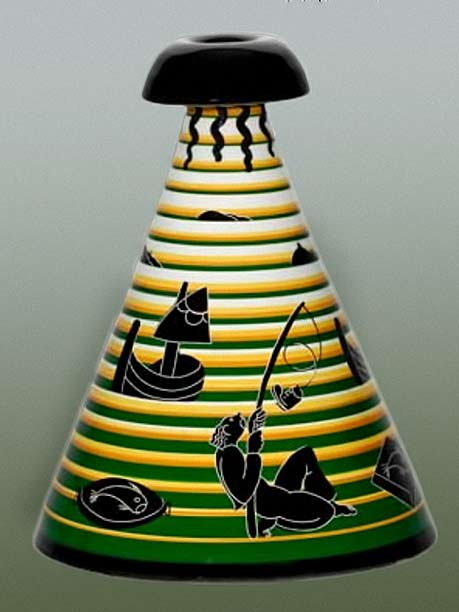 I think Clair may have been looking at this 1936 piece when coming up with one of the designs that appeared on the Fresh packaging. 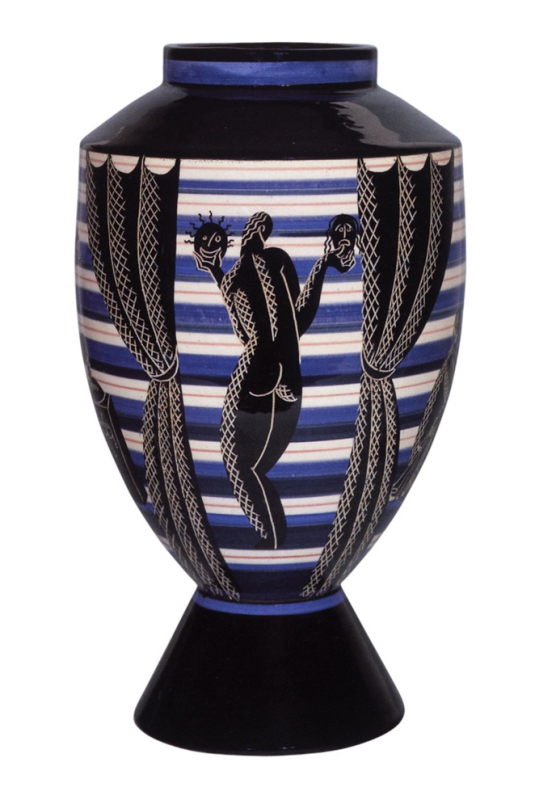 And perhaps borrowed from one of his own more recent works for the face that appears on the lid. 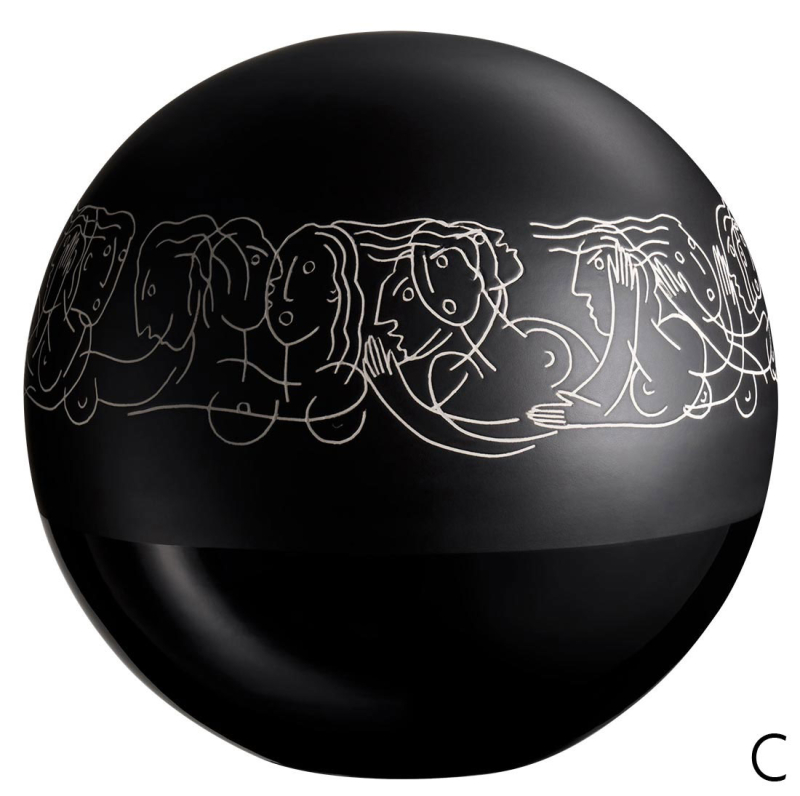 Some more recent Rometti collaborations that caught my eye were with surrealist artist Jean Cocteau (been eyeing this vintage compact with his work on it for over a year now but can't pull the trigger - so expensive!) and lingerie designer Chantal Thomass, both of which were overseen by Clair. 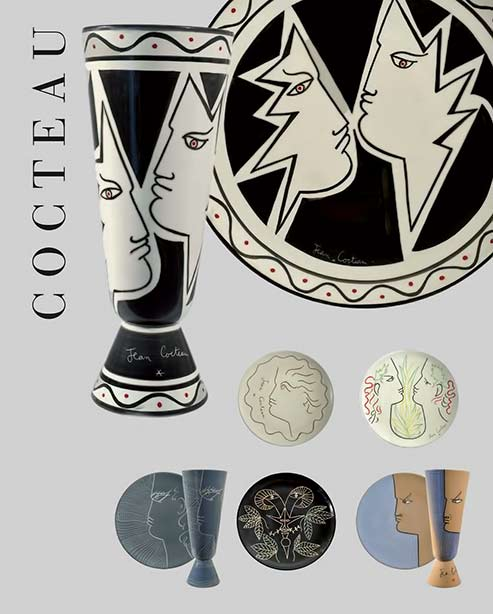 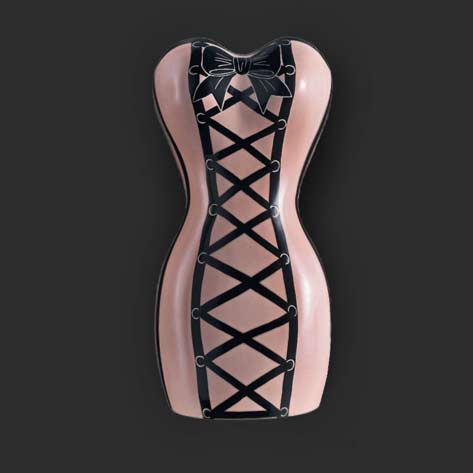 Final thoughts: I can appreciate Rometti's craftsmanship but the artwork in the Baldelli/Cagli vein just isn't my speed, so the Fresh packaging isn't my favorite.   However, the design was definitely the most representative of Rometti's aesthetic and it is a historic company.  And as I said earlier, if Fresh was going to choose any company to partner with to create a limited edition Umbrian Clay Mask, Rometti is absolutely perfect.  It shows that some thought went into the collaboration rather than blindly choosing a random artist who probably couldn't capture the essence of Umbria, not to mention clay, as well as Rometti can.