For the majority of inquiries I receive -  say, around 75% - I'm ashamed to admit that I can't provide any information.  I do enjoy researching them but I loathe not being able to give a definitive answer on the item or brand people are asking about.  Recently I receive an inquiry from a woman who was, sadly, going through her deceased mother's belongings and came across 4 gorgeous compacts that she wanted to know a little more about.  While I was still not able to provide solid information for a couple of them, I was able to delve a bit more deeply into 2 of them.  I guess 50% is better than my usual rate for inquiries! 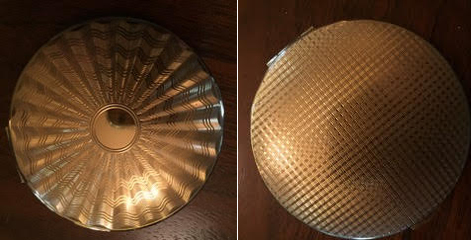 Fortunately the puff was still in there so I could see the brand.  The Melissa company, according to the British Compact Collectors' Society, dates from around the 1950s-70s.  Says one researcher: "Melissa is thought to have been based in Acton, London W3 from the early 1950s, but I found that by 1962 the company had premises in Arundel Road, Uxbridge, Middlesex.  In 1970, the company was still listed at this address in a telephone directory, but by 1972 another company occupied the site.  A local trade directory of 1976 listed Searchlight Products, so possibly the firm was still trading at this later date, but I have been unable to find out at what date it ceased manufacturing compacts." 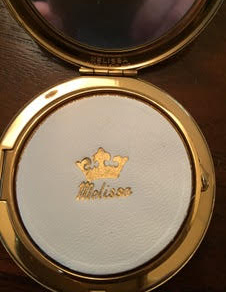 Next up is a "sweetheart" black enamel compact, so named for their popularity among WWII soldiers who gave them as gifts to their loved ones during wartime.  Without a maker's mark I couldn't identify the brand, but from what I could make out the insignia in the heart looks a bit like the "prop and wings" motif from the U.S. Air Corps.  I asked the submitter if anyone in her family was in the military and she confirmed that her father was in the Army Air Force during WWII.  What a sweet gift for her mom.

I'd love to write a comprehensive history of sweetheart compacts, but it's such a huge project that it will have to wait for when I have time...like, maybe when I'm retired.  :( 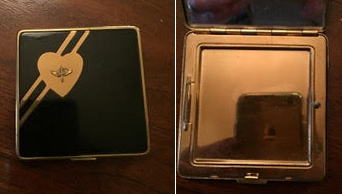 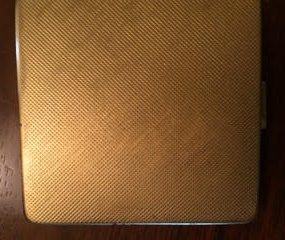 For these last two a little more information was available.  Zell was a leading compact company from the '30s-'60s and was  one of the "5th Avenue" lines, along with Rex, Dorset, Columbia and Dale.  Zell had some quite novel compact designs early on, including the "First Nighter" - a compact with a flashlight that was released in the '30s (can you believe that?!)  But Zell was primarily known as a solid brand that offered understated, stylish designs as well.  The compact in question is an elegantly striped square piece with rounded edges. 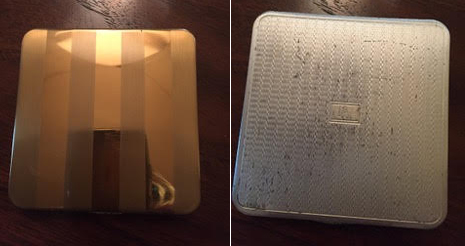 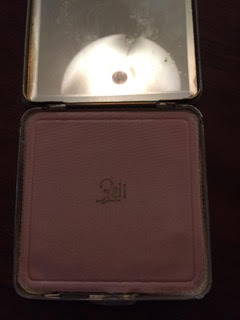 I tried to find a little more information from my local library about the company, but came up mostly empty-handed.  I learned through a few meager news clippings that the company was founded by David H. Zell, who passed away in 1944.  While his widow Sophie was technically President, it was the Vice President, one of their sons Daniel D. Zell, who was really running the show, given this clipping (not to mention numerous patents in his name.)

After I scoured the historical newspapers, I decided to try old-fashioned googling to at least try to find when the Zell company was founded and when it went out of business.  I didn't find those dates, but I did unearth something quite interesting and bought it immediately. 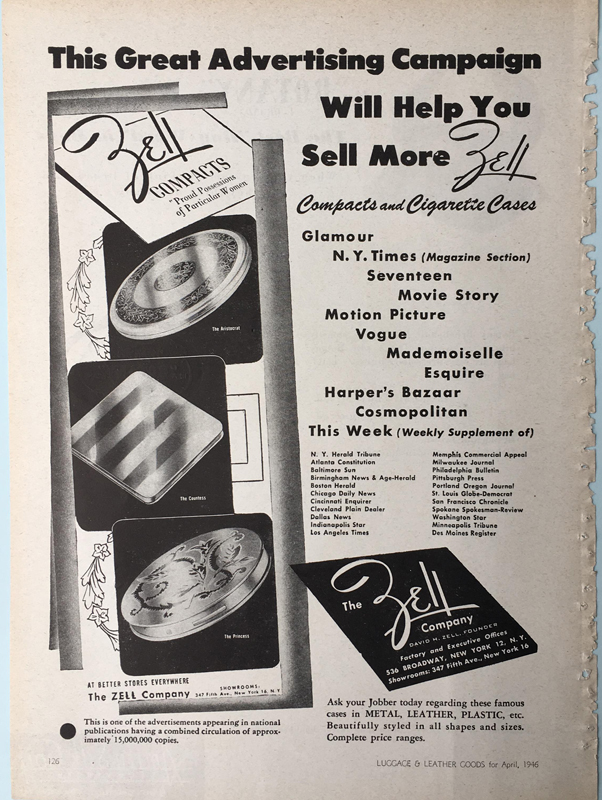 Well, look what I spy!  It's the very same compact!  The ad indicates that this particular style actually had a name:  it was called the "Countess".  Here it is up close in case you couldn't make it out.  (The one above is the "Aristocrat" and the one below is the "Princess".  Ooh la la.) 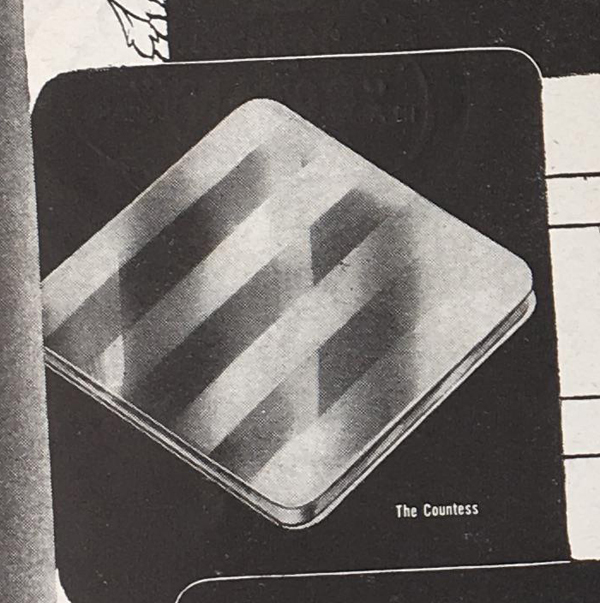 When I originally researched this inquiry I guessed that the compact in question was from the '50s, as that was the height of Zell's popularity and, in my opinion, gold-tone compacts.  But I was wrong.  The promotional ad is from 1946, so it must have been released if not that year then around then. While I'm still a little miffed at not being able to put together a full history of Zell, I'm glad I could at least identify this particular compact.  It was complete luck but I'll take it.  :)

I saved the most interesting one for last.  I couldn't for the life of me recognize the brand, as the photo of the mark on the back was too dark and small. 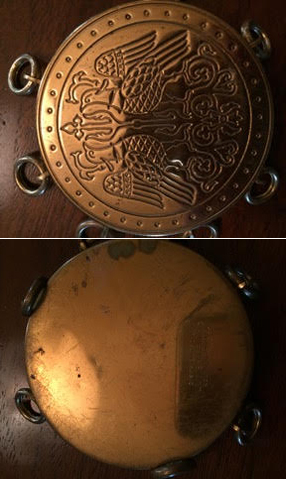 Thankfully the submitter included a picture of the puff.  I recognized the concentric L-shapes as the logo belonging to Lucien Lelong, a famed French couturier turned perfumer and cosmetics manufacturer. 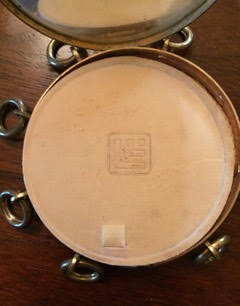 The design of the compact is truly fascinating.  The intricate, regal birds are reminiscent of motifs found on royal crests, and I can't say I've ever seen a compact with little rings attached to it.  Off I went to find more information and found a few ads so I could give a date of when this compact was released.  Known as the "tambourine" compact, it looks like it first appeared in September 1948. The rings could be simply decorative and just there to be "pleasant sounding", or perhaps Mom could attach some charms to them - seems they were really pushing this as either a Valentine's Day or Mother's Day gift.  It may also have waned in popularity by 1950, given the price drop from the original $5 to $0.99.  As a side note, my mind is always blown by the retail prices of vintage pieces!  They seem so inexpensive, but according to this online calculator a $5 compact would cost approximately $52 nowadays.  Still, that's a reasonable price for a nice compact...and it would be only $10.13 on sale.  :) 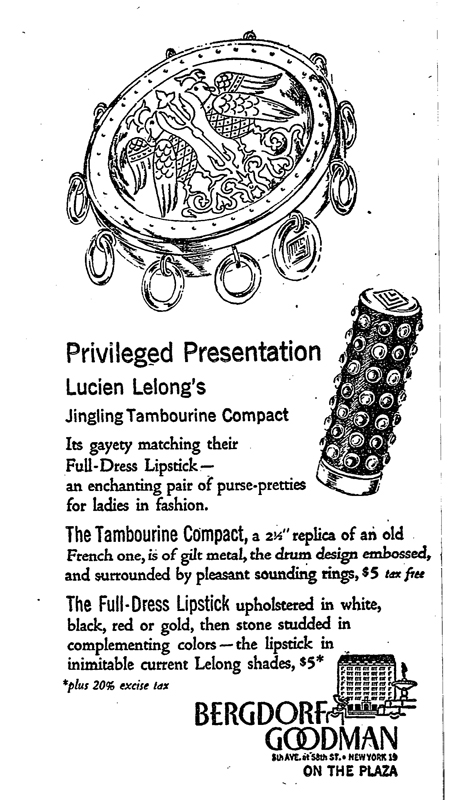 LOL at "gifty!"  These old ads crack me up sometimes. 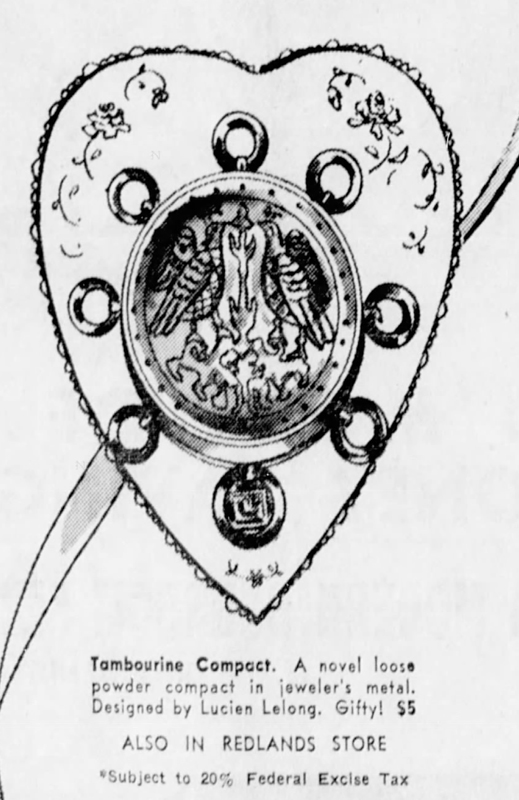 I was really curious to know why Lelong decided to introduce this compact, as it didn't seem to have a connection to any of the company's fragrances or couture.  I did come across this "Ting a Ling" perfume bottle which also had rings attached and was released around the same time as the compact.

But as you can see, it has bells, whereas I didn't see any Tambourine compacts with bells.  According to the New York Times ad above, the compact was a replica of a vintage French tambourine, which, when I first laid eyes on that description, sounded like utter marketing garbage.  However, thanks to extensive information provided on Lelong by the Fashion Institute of Design and Merchandising, it's entirely possible that the design was indeed inspired by a vintage tambourine.  Lelong employed the services of noted artist Peter Fink to create novel, unique packaging for his perfumes and lipsticks, such as the Ting a Ling bottle and Full Dress lipstick mentioned in the ad above, so it's probable that Fink came up with the tambourine compact design as well.  As for the notion that the compact was specifically a French tambourine replica, that's also credible given Lelong's love for his home country.  So maybe the advertising isn't a complete pile of crap spun by unscrupulous marketing directors.*  ;)  Anyway, I was happy that I could find a name and date for this compact.  This is definitely one I'd love to add to my collection, but they are rare (read: expensive, especially when in good condition) and tend to get snatched up immediately.

In closing, I'd like to thank the person who took the time to share these items with me.  Since I was able to provide a couple tidbits, this was one of the few inquiries that didn't end with me getting very upset at finding zero information.  Plus, all of the compacts are great from a design standpoint.  Even if I didn't find a single thing about them, I would have just enjoyed looking at them.

What do you think?  Which of these is your favorite?

*Eh, it probably is. Another newspaper ad from December 1948, which I didn't clip since I refuse to upgrade to the "premium" subscription of newspapers.com (they're such jerks - this stuff should be free!), and my local library didn't carry the particular newspaper, notes that the tambourine is an "exact replica of a g---y's tambourine".  Oof.  That would be pretty unacceptable language now, not to mention that it makes me doubt how inspired the design was.  Or it could also be a matter of marketing to different geographic areas - perhaps the advertising people thought that "French" would be more appealing to what they perceived to be a high-fashion East Coast crowd so they used it in the ad that ran in the New York Times, and changed the description to the g-word for simple Midwestern folks, whom they assumed had less stylish taste than New Yorkers and may have been put off by anything described as French (the g-word ad was found in the Indianapolis Star.)