Holographic.  Iridescent.  Duo-chrome.  Prismatic.  Whatever you want to call it, this spring's color trend isn't a color at all, but as with fall 2015 , a particular finish.  I have to admit I haven't seen it at the high-fashion level, i.e. none of the spring 2017 fashion shows or magazines featured it.  However, after sifting through a lot of runway coverage and the spring issues of all 8 of the magazines I subscribe to, I still wasn't seeing any one color in particular standing out.  Despite talk of peach being all the rage and millennial pink taking center stage, neither of those seemed to be clear winners.  Thus, I went with what I know best and restricted my color trend choice to products aimed at the masses rather than those found on the runways.  As I predicted in January, the holographic makeup trend is still on fire this spring.  When you take into account how many of these color-shifting goodies were released last year (most of which I purchased in my never-ending quest to pretend I'm a mermaid), the sheer number of products continuing to be offered this spring is astonishing. 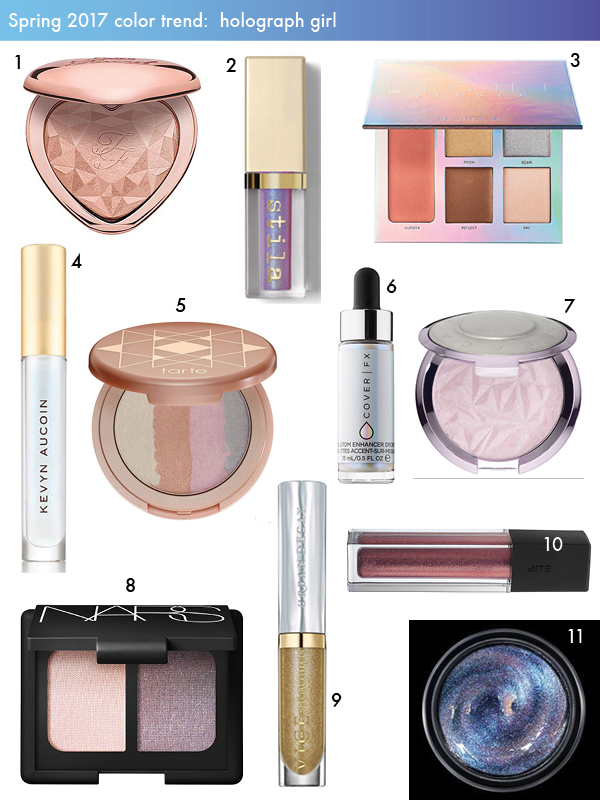 It got me thinking about why these shades are having a moment now.  After all, iridescent makeup isn't new, not to mention that we haven't even been seeing much prismatic magic in the way of fashion - usually fashion trends spill over into the beauty world - so I'm curious to know why it exploded in the past year or so.  Heck, holographic even spread to interior design and accessories.  Fortunately, Racked had a great article that explores the history of what the author calls "unicorn" makeup (although I'd argue that mermaid makeup is basically interchangeable when describing the trend) and why we can't get enough of it right now.  I'm incline to agree with her conclusions, which state that the current craze is partially a backlash against the no-makeup makeup look that was THE reigning trend a couple of years ago, and that it's also a response to the turbulent political climate.  Color-shifting, dreamy makeup that reminds us of mythical beings we loved as children (and in my case, still obsessed with) is very comforting when the world seems to have gone to hell in a handbasket.  The author of another excellent piece examining the iridescent frenzy within the sphere of interior design concurs:  while some of the reasons it took off in home goods and furniture are different than for makeup (new technology making prismatic finishes possible, etc.), she writes, "As economic optimism coincides with a tumultuous cultural and political landscape, its no wonder the art and design world is embracing the dreamlike and surreal.  At this point, we may as well coat the world in an iridescent glaze, if only to enjoy the illusion."  Just to put in my two cents, I'd add that the holographic trend's popularity is owed simply to its sheer prettiness and versatility - after playing with many of these items, I can say the effect of prismatic makeup can be subtly ethereal, or you can layer a bunch of product to go full-on rainbow.

What do you think?  Are you game for holographic makeup or is it not your thing?