It was love at first sight with this precious doll-shaped powder box that Les Merveilleuses Ladurée released in honor of their 5th anniversary.  I mean, even the outer packaging is gorgeous.  As a collector, I was also overjoyed to receive a free tote bag from the seller, which I used as a background for these photos - isn't it pretty?  There is also a beautiful rose shaped blush with the same outer packaging that I have on its way to me, but the star of the show is clearly the powder. 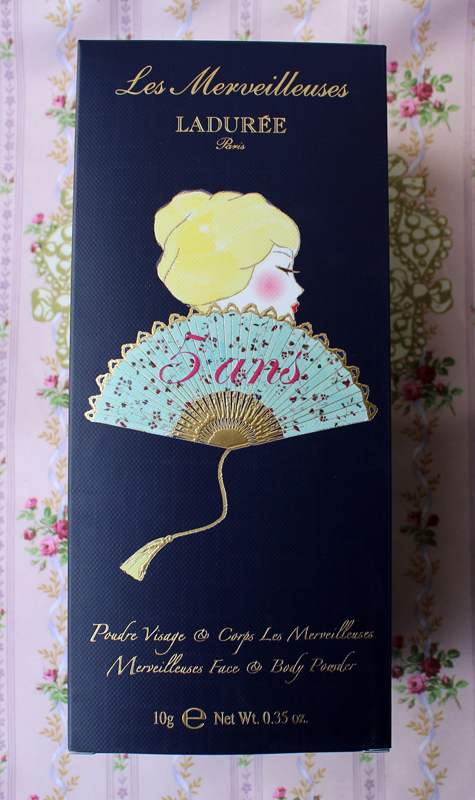 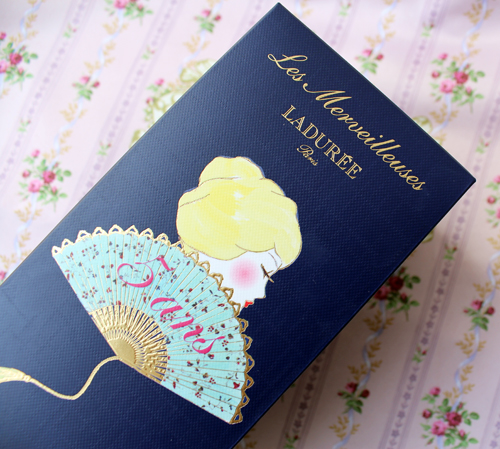 Both whimsical and sophisticated, this delicate doll figurine is outfitted in a sumptuous blue velvet dress with a purple satin ribbon. 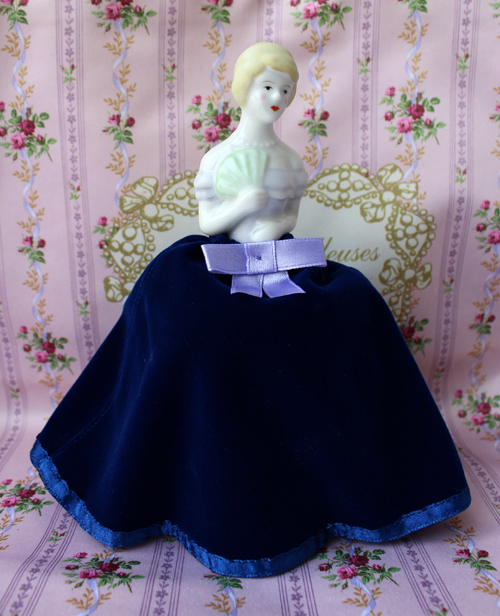 It looks like it might be heavy in the photos, but it's actually very lightweight and seems quite fragile - I was so afraid it would shatter if I dropped it. 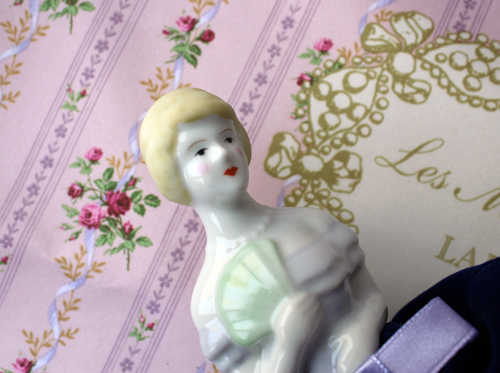 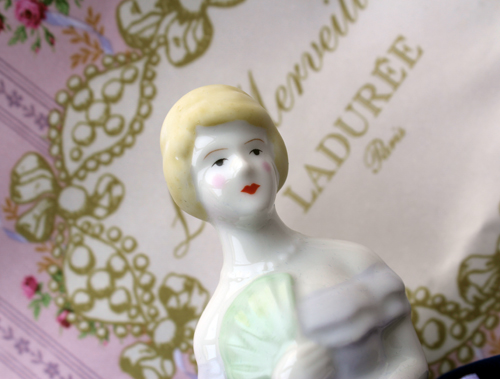 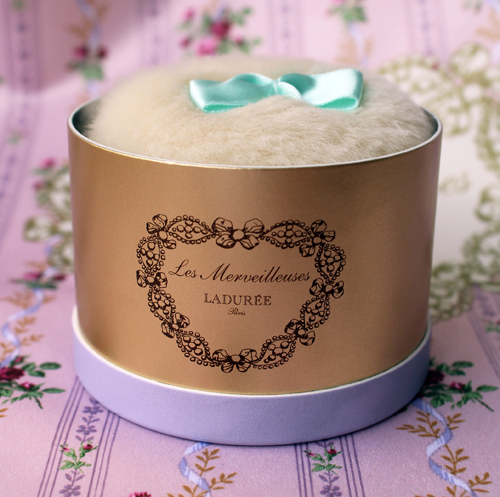 I wonder how many people bought this to actually use it and not collect.  While the velvet dress is lovely, you'd have to be really careful to make sure the powder doesn't get all over it. 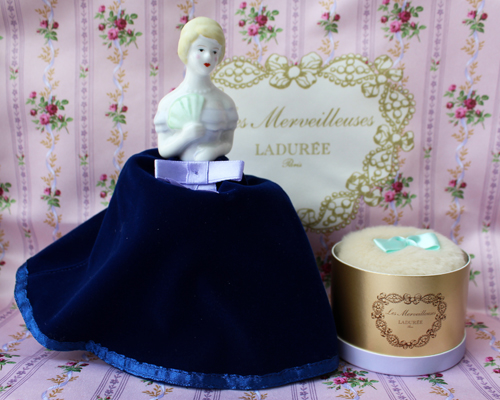 When I first laid eyes on this my makeup historian sense was immediately tingling; somehow I just knew this design wasn't new.  Upon searching for vintage doll powder boxes I came across many different kinds, most made of porcelain or ceramic, but the ones made of papier mache stood out to me.  That particular material jogged something in my brain and I suddenly remembered where I had seen them before. 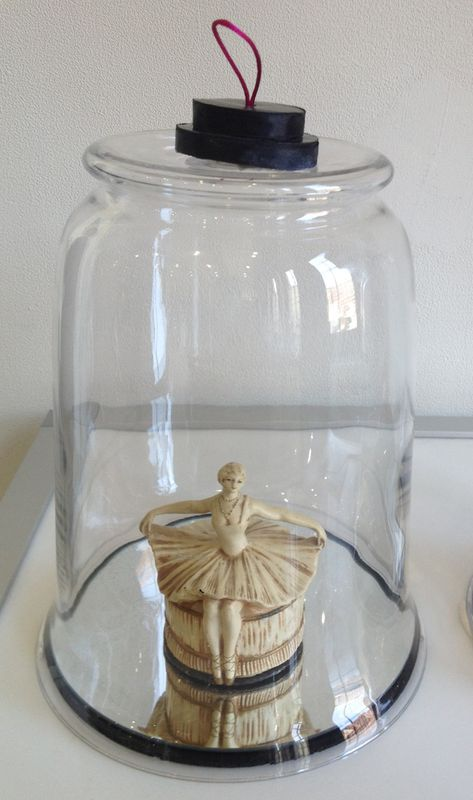 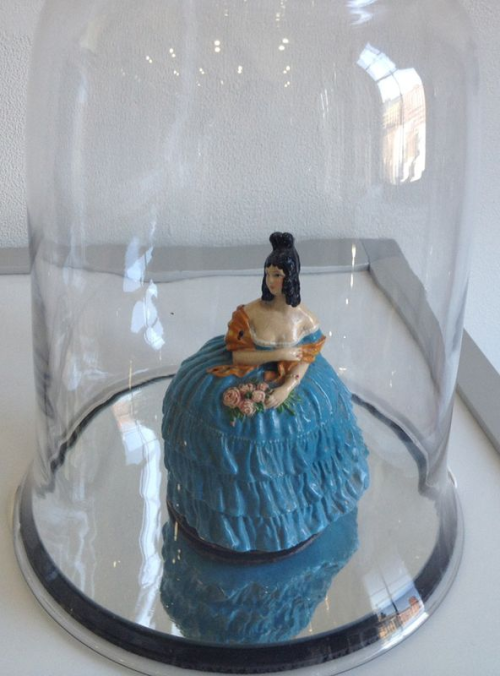 Yup, at the 2014 Makeup in New York exhibition!  How could I forget?  I guess I wasn't paying attention to the labels on these even though I took photos of them, LOL. 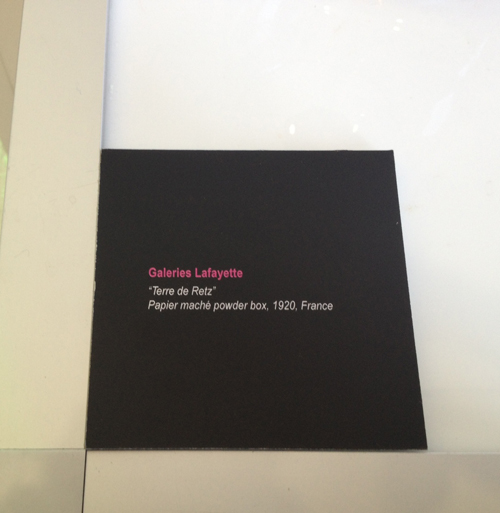 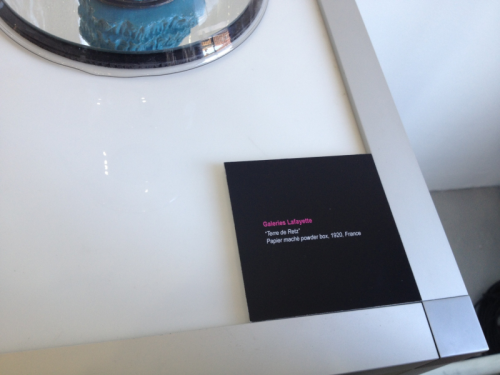 Terre de Retz was a line of doll-shaped powder boxes introduced by famed French department store Galeries Lafayette sometime around 1920.  This blog post had the full scoop on them and led me to buy this book.  Yes, I bought an entire book on perfumes just to get the tiny morsel of additional information it had on these powder boxes, and also because I had totally forgotten they were in this book as well.  Anyway, they were designed by Georges Duchesne (most of them are signed G. Duchesne) and came in a wide variety of styles ranging from Marie Antoinette-era fashions to 1920s flappers.  I suspect Terre de Retz was the inspiration for Ladurée's anniversary item, as both are constructed from a paper-based material and the general design for some of the Terre de Retz figurines is the same (i.e. the way in which the powder box is hidden and fits into the top part of the doll). 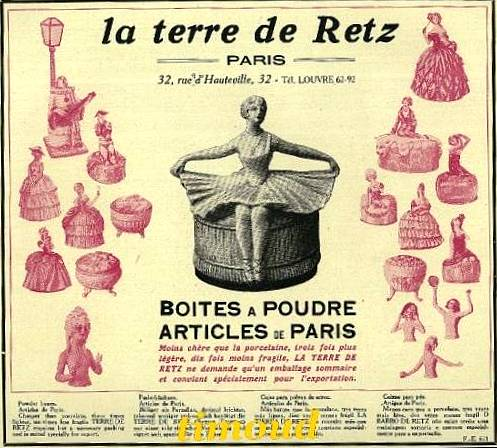 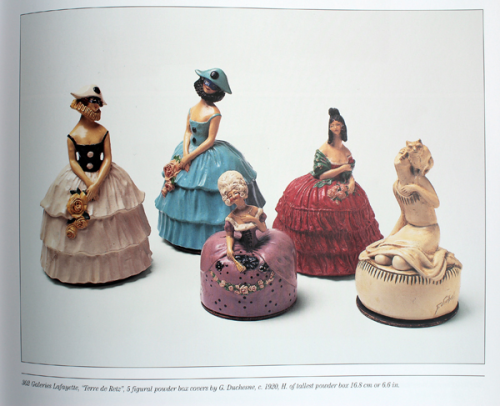 The ones that appear to be the most common are these masked figurines and ones dressed in a mid-19th century style (at least, they resemble that period to my eye). 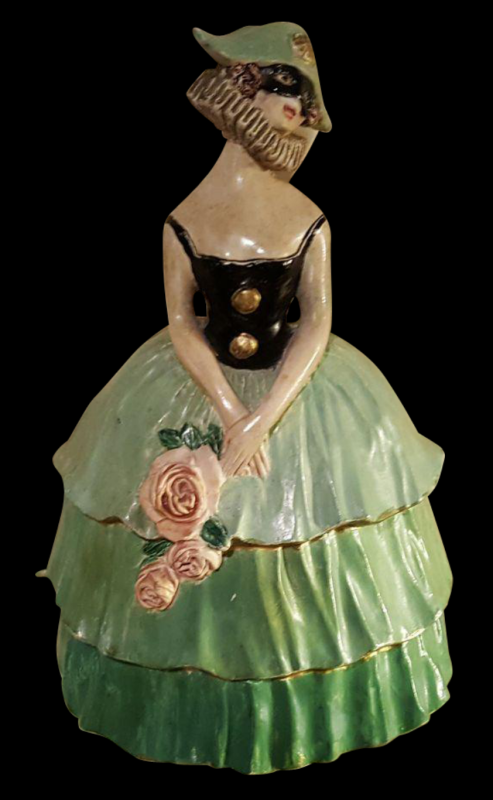 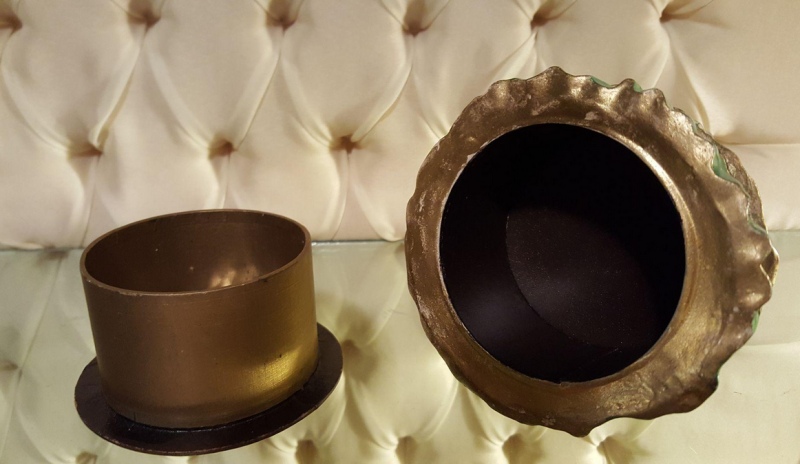 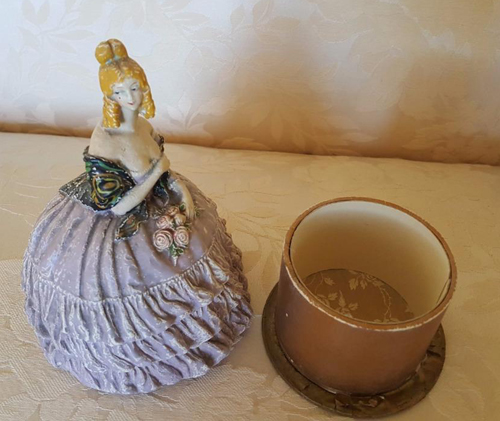 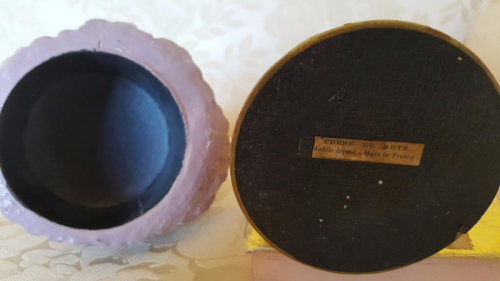 Some other ones I liked: 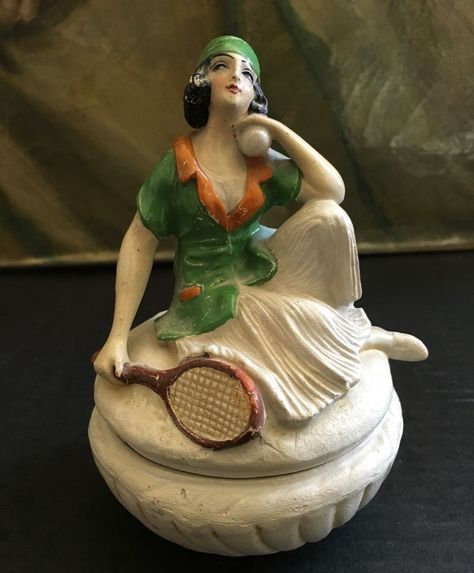 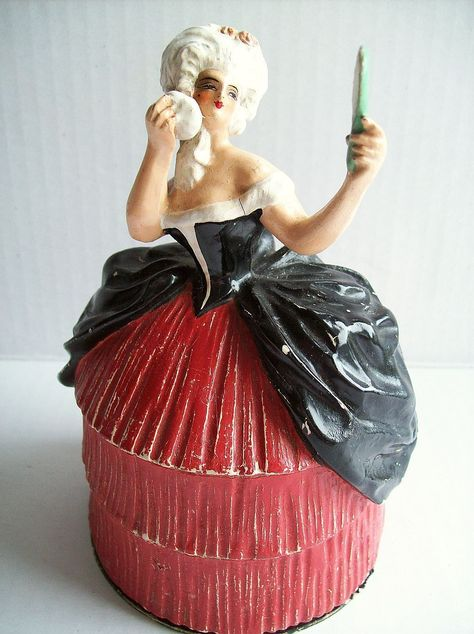 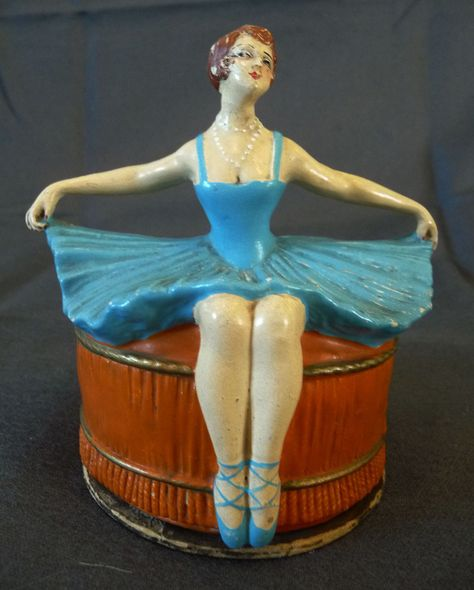 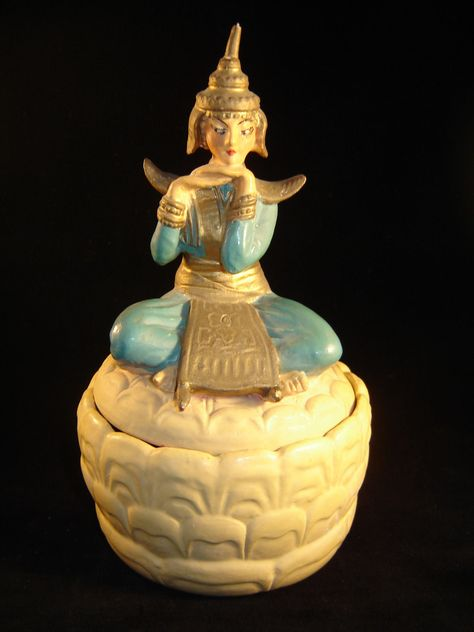 My favorites though were the ones that most resembled the Ladurée figurine.  While these ladies flaunt a more French Revolution-era style in terms of hair and makeup, they have voluminous blue skirts, fans and necklaces. 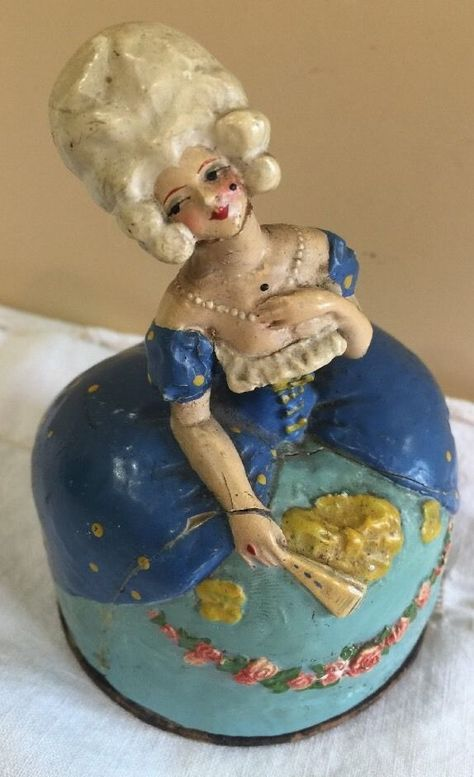 This one also has a bow.  I really wanted to buy it but it's missing the bottom part of the box, plus, as I sadly discovered, Terre de Retz figurines are not cheap.  This one is going for $695 on ebay and the lowest price I've seen for one so far is $299.  Maybe someday I will have one for my very own but not right now! 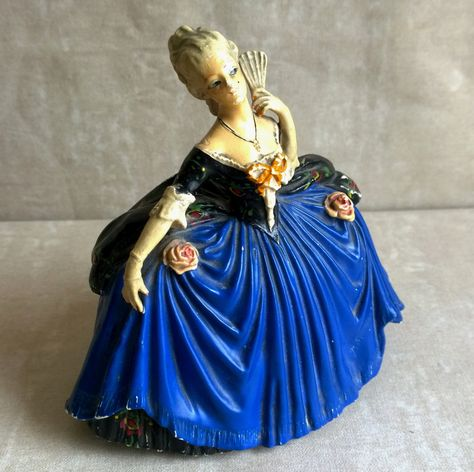 While I have no proof that Ladurée drew on Terre de Retz for their 5th anniversary powder box, it would be quite a nice nod to their French heritage.  In terms of a more modern, artsy take on figural powder boxes, I'd dearly love for a company to collaborate with this contemporary artist - while she doesn't make powder boxes to my knowledge (only figurines), I think she'd come up with some amazingly imaginative designs given her style.