A day with "jeweler to the stars" Paul Flato

Tiffany?  Harry Winston?  Fred Leighton?  Forget about 'em.  While they might be supplying the sparkling baubles for today's red carpet, back in the late '30s and '40s there was a jeweler bigger than those 3 put together:  Paul Flato.  I'll get to why I'm talking about a jeweler in a sec, but first a brief bio is in order.  Paul Flato (1900-1999), moved from his home state of Texas to New York City at the age of 20.  He opened his own jewelry store shortly afterwards and employed several designers.  By 1937 he had another store on the West Coast to further solidify his status as the go-to jeweler for the biggest Hollywood stars (think Joan Crawford and Katherine Hepburn) as well as a jewelry designer for major films.

Now here's where his story goes off the rails.  In 1943 he was arrested for pawning over $100,000 worth of jewels that clients and fellow jewelers had entrusted to him on consignment and served 16 months in Sing Sing.  Upon his release from prison he started a lucrative business designing compacts, which was fortunate as his Hollywood career was basically over.  After the compacts, Flato continued to design jewelry in the store he opened in Mexico City from 1970-1990, then returned to Texas for the last decade of his life.  To my knowledge he never got back into Hollywood's good graces - I couldn't find anything about him supplying jewelry for movies/actresses after 1943 - but it didn't matter since he had already become a legend.

I had seen the Flato brand floating around previously during my various vintage compact hunts and figured one would be a good addition to the Museum's collection, but none of the designs really appealed to me.  Since they can be on the pricey side I decided to hold off to see if any really caught my fancy.  And as luck would have it this adorable compact and lipstick case, still in the original box, eventually surfaced.  Against my better judgement I got involved in a nasty Ebay bidding war, but ultimately won (and probably overpaid a smidge). 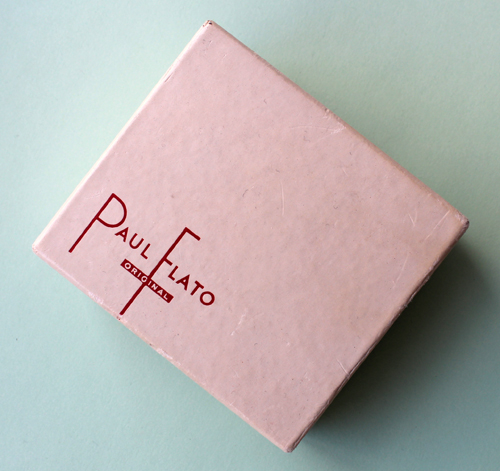 Looking back it was totally worth it given how awesome the design is.  You may or may not know I have a thing for mint green/jade/bakelite so when I gazed into this kitty's glowing mint green eyes I knew she had to be mine. 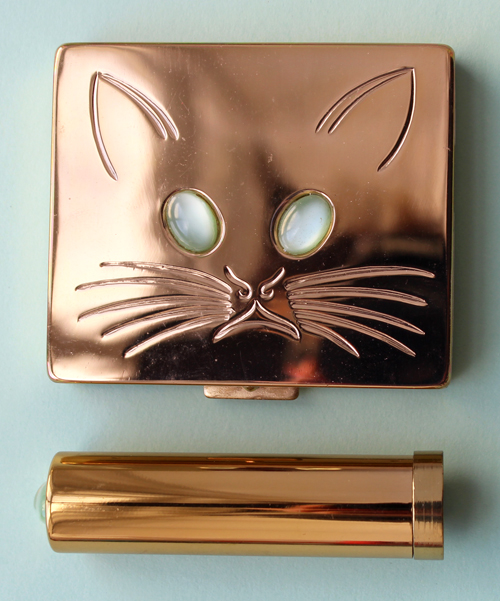 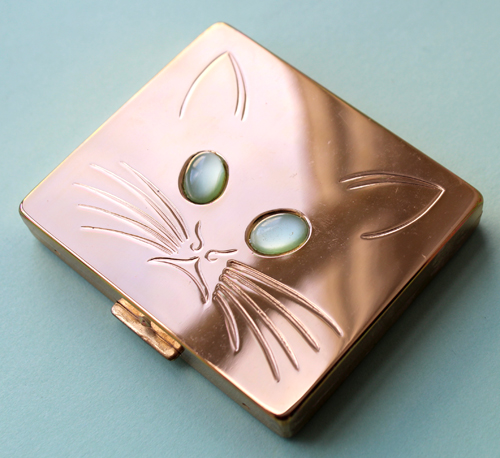 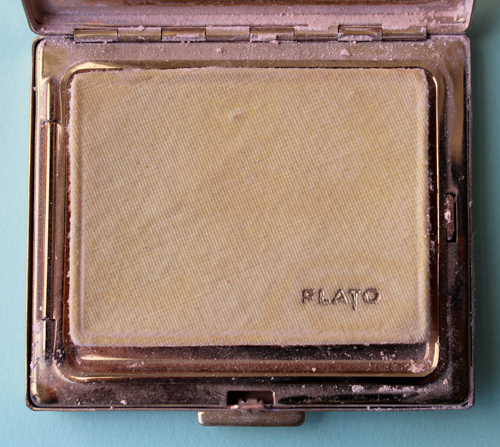 Love the matching design on the lipstick case! 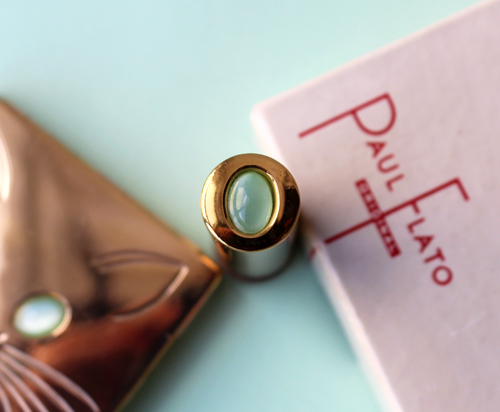 I thought it would be good to discuss Flato's style a little so we can see how it translated to the compacts.  I find his pieces to be whimsical and tongue-in-cheek, while still piling on the sparkle.  Some examples, according to his obit in the New York Times:  "Among them were a diamond 'corset' bracelet, with garters in rubies and diamonds, based on Mae West's undergarment...a compact for Gloria Vanderbilt was studded with gold and enamel angels, including an angel on a chamber pot. A pair of little brooches of gold feet with ruby toenails was originally made for Irene Castle, a play both on her maiden name, Foote, and her dancing career."  Flato also drew on everyday experiences and items - his observation of fallen leaves one crisp autumn day turned into this brooch, while a basic belt buckle became a dazzling aquamarine necklace. 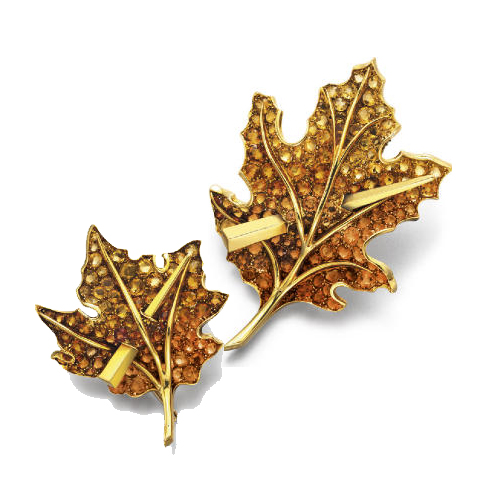 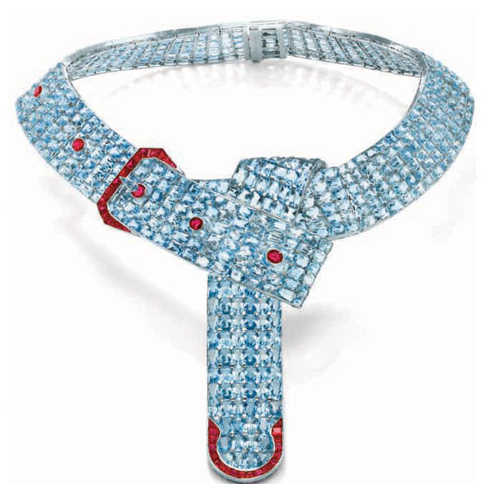 Another prominent motif in Flato's work was hands, according to this site:  "Hand imagery had always been of interest to Flato, who notably used antique hand sculptures to display jewelry in ads that appeared in Vogue and Harper’s Bazaar during the 1930s."  Here are some quite literal examples. 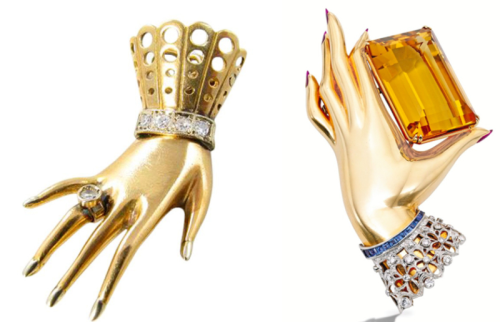 Not only that, but Flato's own battle with hearing loss at a young age inspired a series of sign language pins. 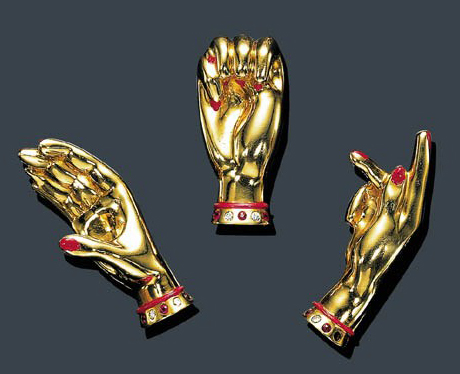 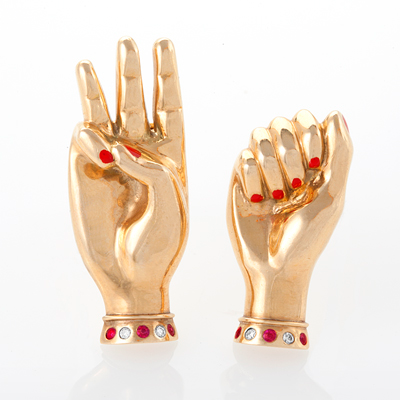 This same playfulness mixed with a healthy dose of sparkle carried over to Flato's compacts.  I liked that he created designs that were different from his jewelry line but still maintained his signature style.  It looks like Flato filed the patent for the compacts in February 1948 and they were available for sale later that year. Interestingly, this wasn't the first time Flato had the idea to design compacts, as evidenced by this 1940 patent for a compact, cigarette case and lipstick combo. 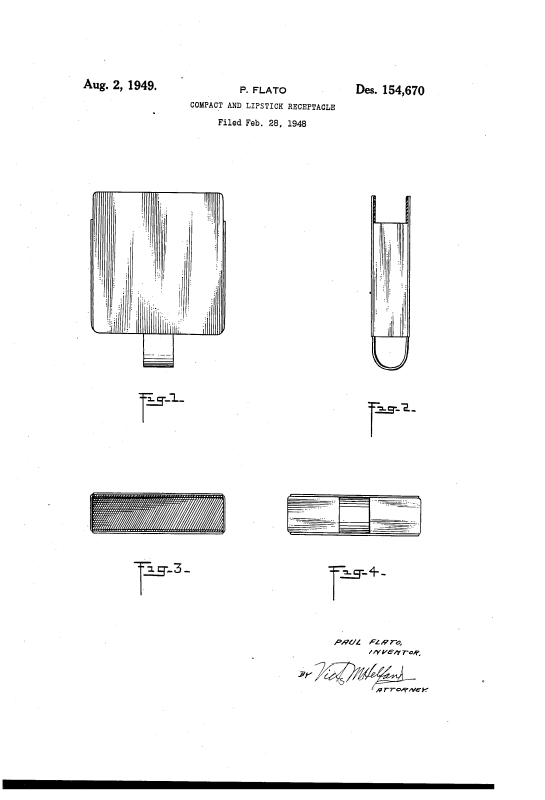 I meant to order this ad from hprints in time for this post and completely spaced on it.  Sigh. 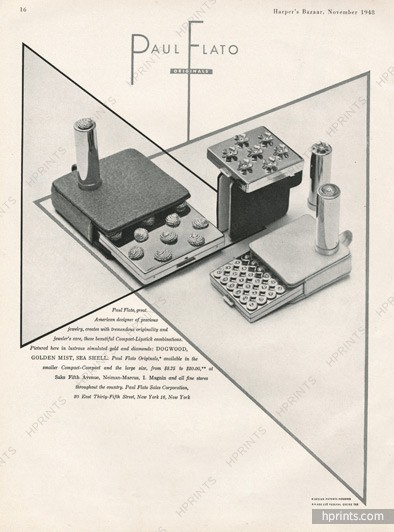 The ones shown in the ad above are fairly common.  I wouldn't mind adding the seashell one to my collection.  ;)  There's also a patent for it too, which is pretty cool. 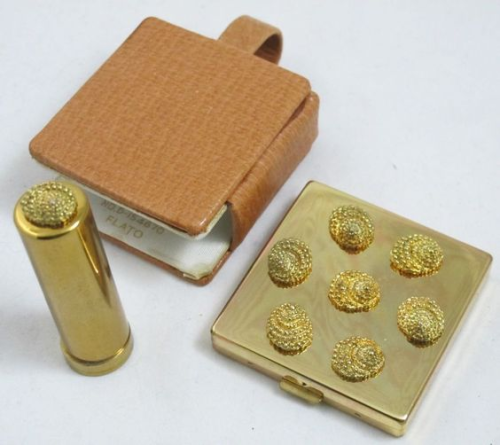 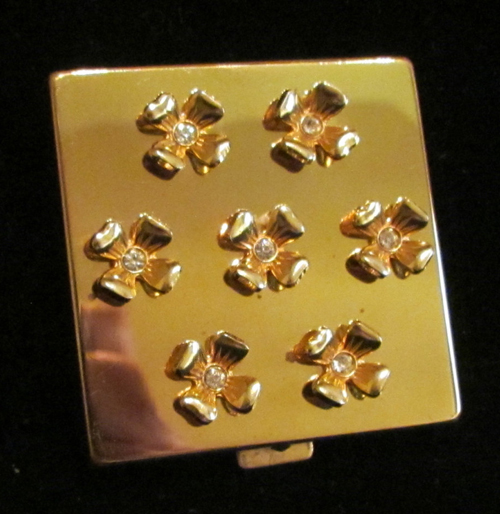 And this circular patterned one. 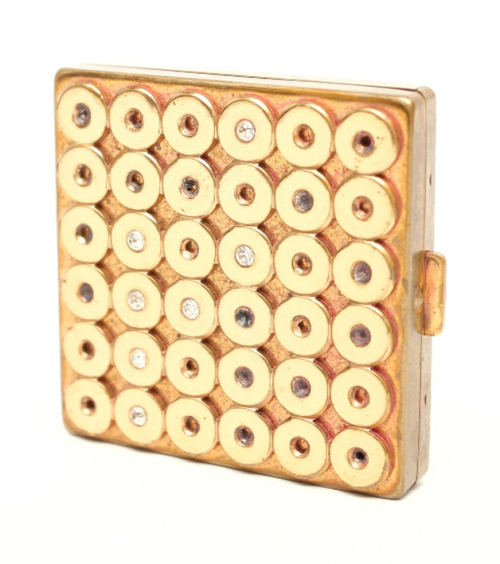 Apparently the compacts were a pretty big hit right away, according to this news snippet from 1949.

Some more, just for fun. 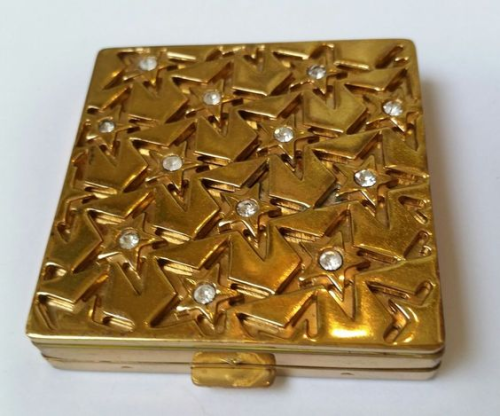 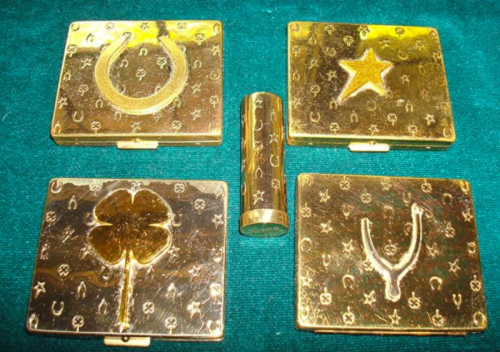 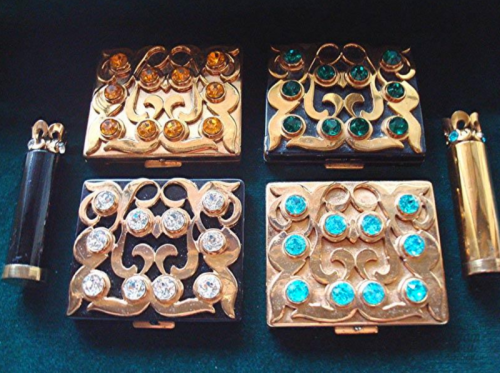 It's not just a key design; it's a key holder!  Yes, you could have the key on this compact custom filed to fit your door.  Personally I'd be petrified of losing it - my keys need to stay on a ring - but you have to admit there's some innovation there. 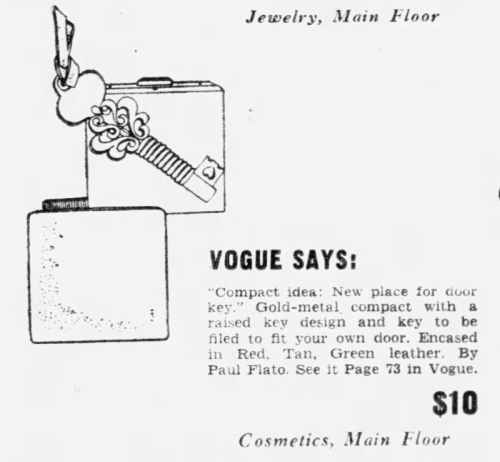 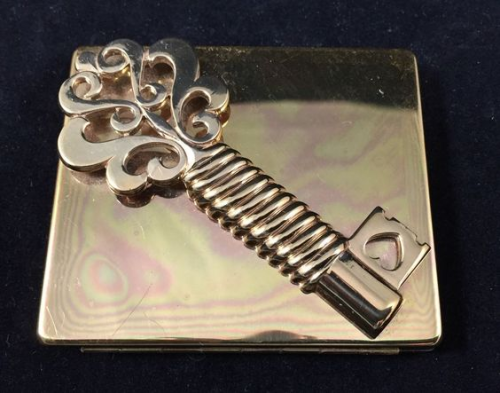 Another key ad, plus the wonderfully blinged-out teardrop design. 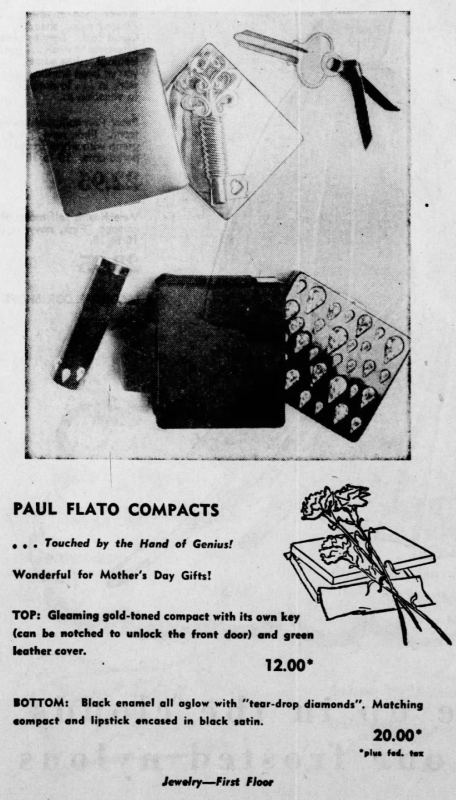 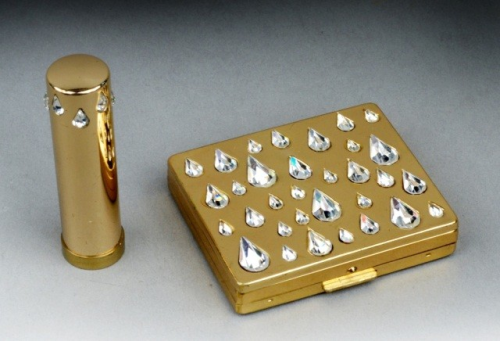 This one definitely shows Flato's sillier side.  Would you like one of his "scatabout" pins while you're at it?  You know, to anchor your lapel flower?  Fashion sure has changed! 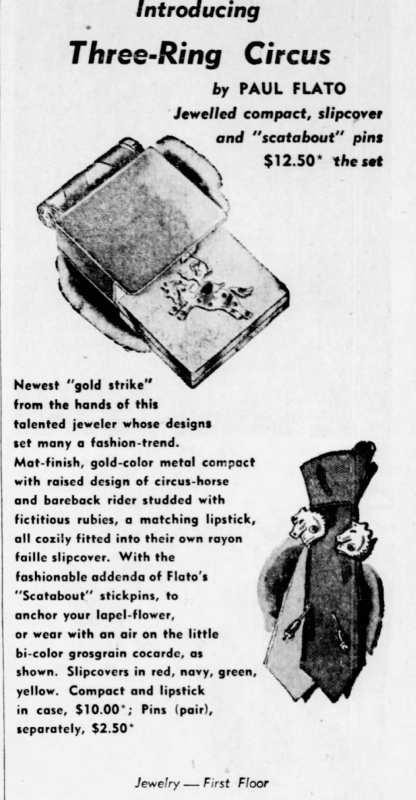 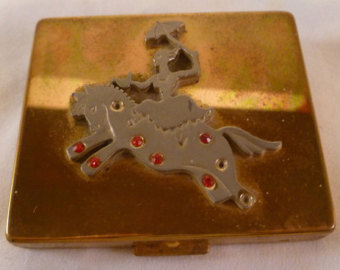 This one is also a lot of fun.  I couldn't find any ads for it but I wonder if it was a special release for Easter. 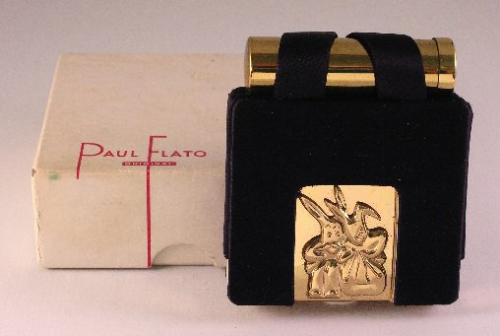 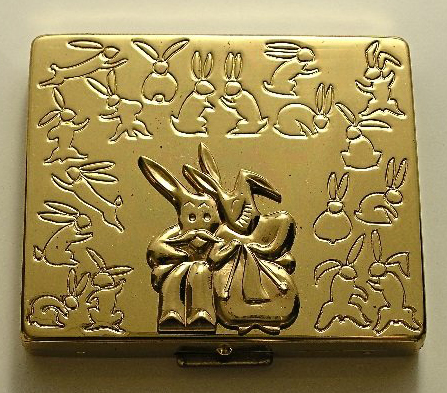 The kitty one I have seems to be relatively rare. In my searches I did see one other in a beautiful tiger-eye colorway instead of the green, but I can't seem to find the photo of it now.  In any case, I'm pretty pleased with this acquisition as I do think it's one of Flato's better compact designs.

What do you think, both of Flato's jewelry and compacts?  Most of them aren't my style but I appreciate them nonetheless.  If his jewelry is really striking your fancy you can always buy this lovely catalog of his work.