Once again I'm in over my head on a vast topic, but I wanted to share another cosmetics museum that is on my must-see list when I go to Japan.  The Museum of Beni in Tokyo was founded in 2006 to celebrate and share the history of the hallowed Japanese red lip color known as beni.  The Museum was established by Isehan Honten, a company that has been manufacturing beni since 1825 (!) and is the only surviving beni company from the Edo period (the use of beni actually dates back several centuries prior to the Edo period).  The Museum contains precious artifacts related to beni, such as the lacquered bowls that are layered with the pigment (known as "ochoko"), brushes, and equipment used to make beni, not to mention a significant amount of memorabilia (books, prints, etc). 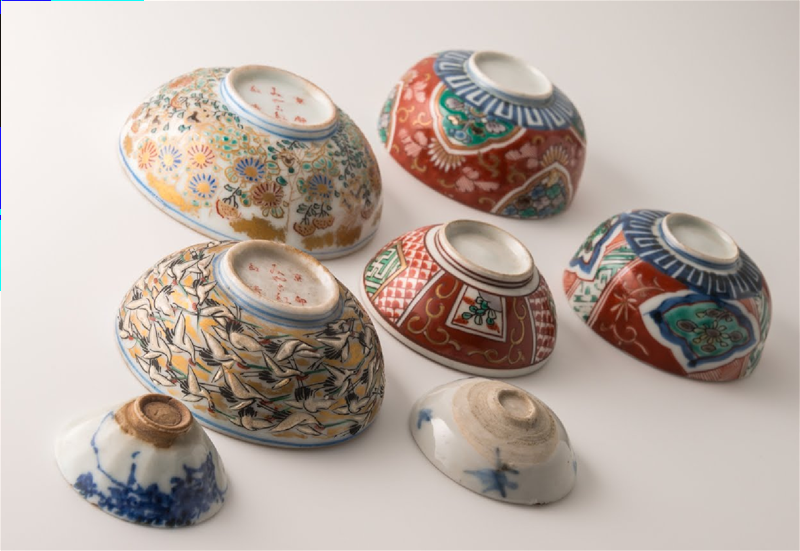 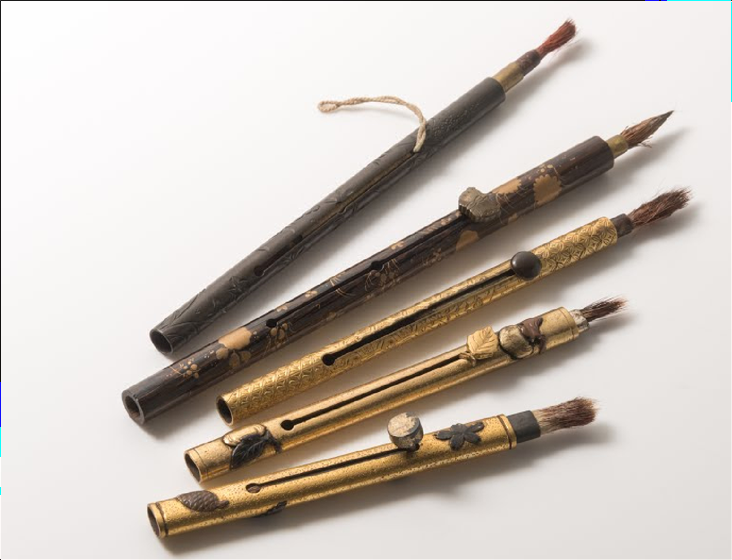 Beni was also portable, stored in carrying cases called itabeni starting around the middle of the Edo period (ca. 1700s).  They were made from a variety of materials, including tortoiseshell, antlers, ivory, metal, wood and even paper.  The really cool thing about them was when you finished up the beni in the case, you could go and have it re-brushed with fresh pigment.  Perhaps this is where the notion of refillable powder compacts and lipstick tubes came from. 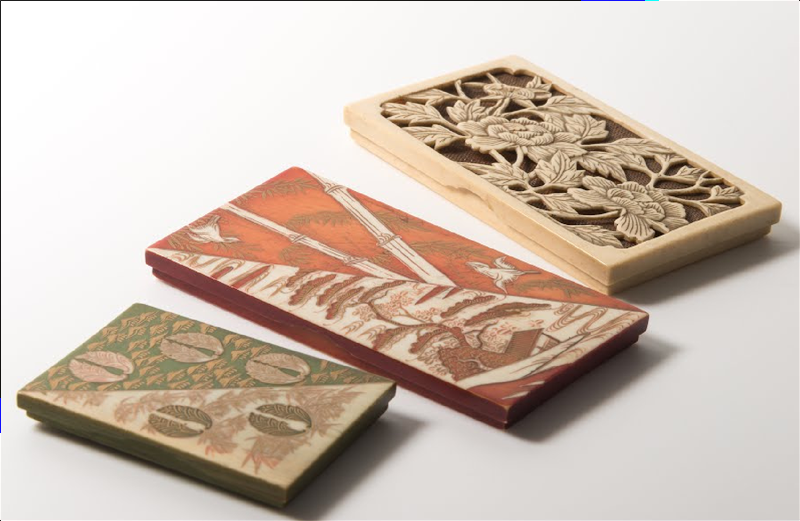 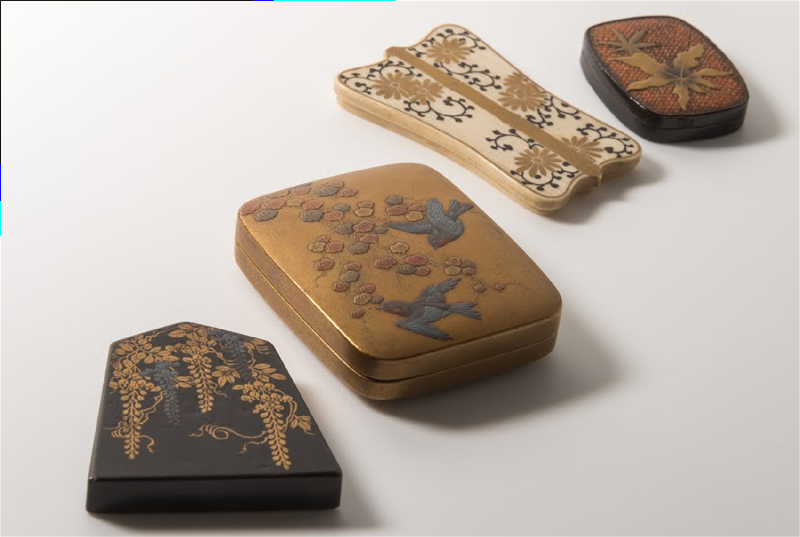 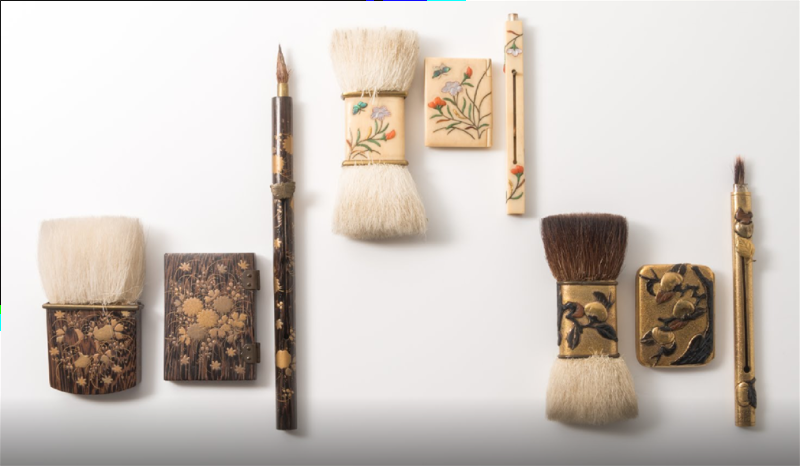 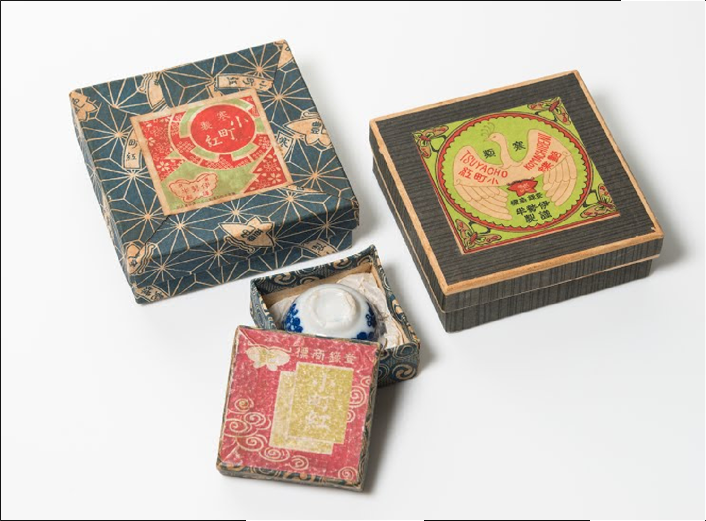 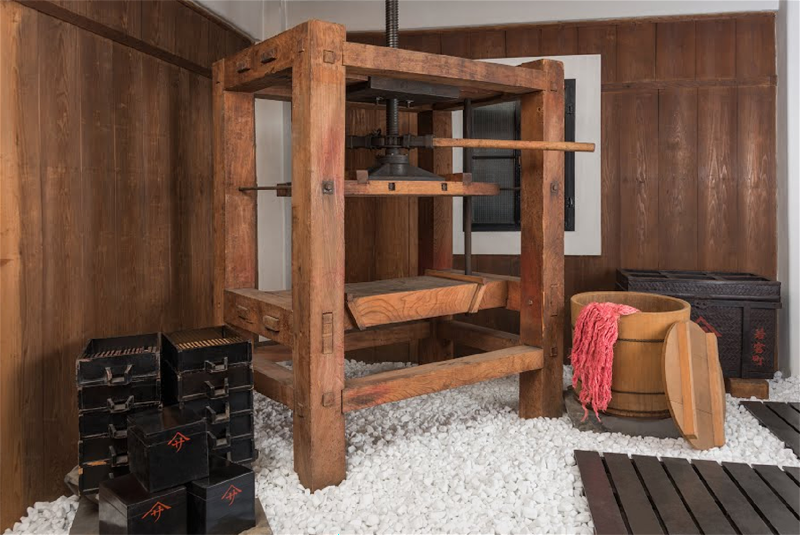 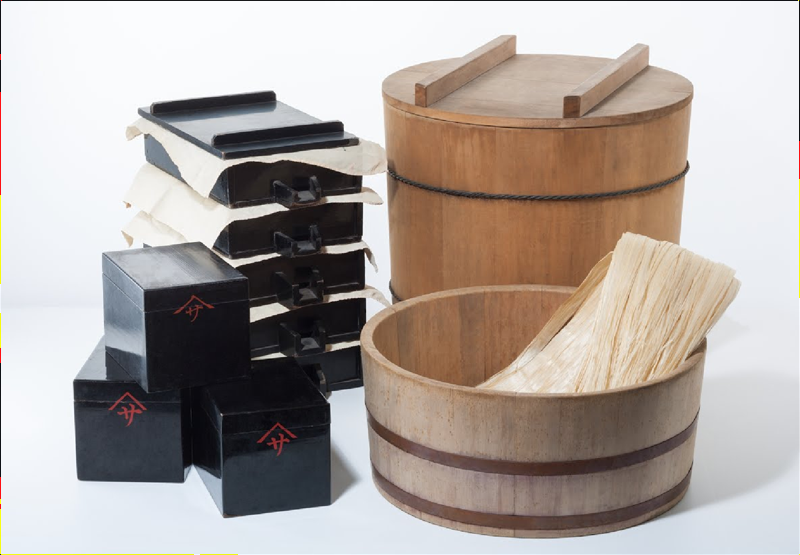 This page from a book published in 1813 called Makeup in the Culture of Kyoto shows how to apply beni. 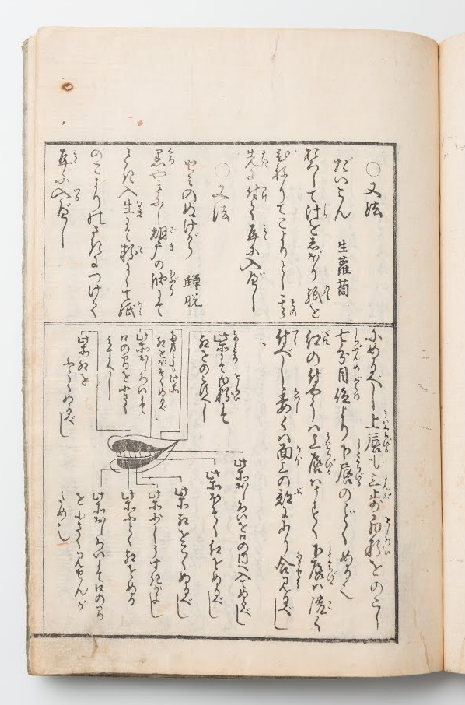 This sign was displayed on the storefront and indicates that it's an official supplier of beni to the Imperial Household Department... 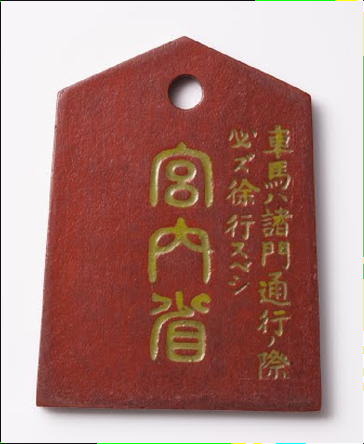 This drawing from 1885 shows one of Isehan's original storefronts and the beni-ba (the space where the beni is made). 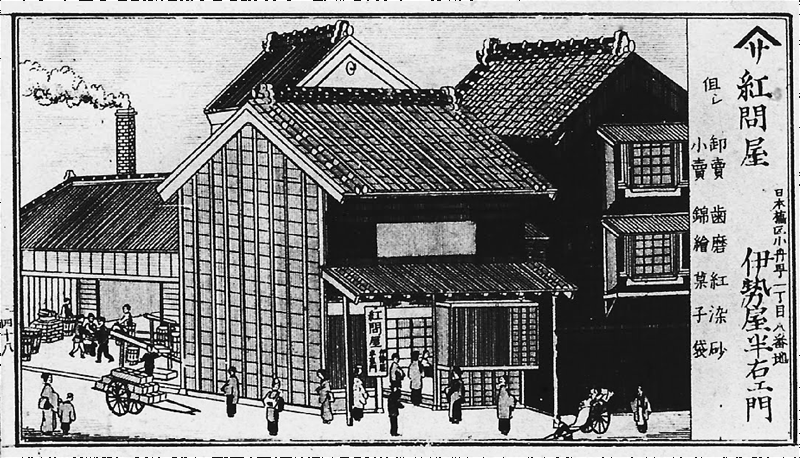 Not only does the Museum of Beni display all these great pieces, it also has a salon where you can try out and purchase beni. 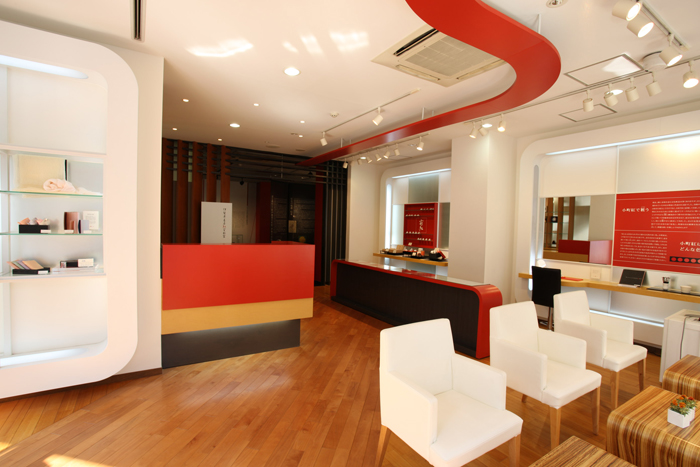 Beni gets its name from the pigment of the benibana (safflower).  While the petals of this bloom are 99% yellow/orange, the other 1% are red and are harvested to make this traditional lip color.  One Komachi beni (Komachi refers to the traditional beni that comes layered in a bowl) requires roughly 2,000 flowers and yields about 50 uses. 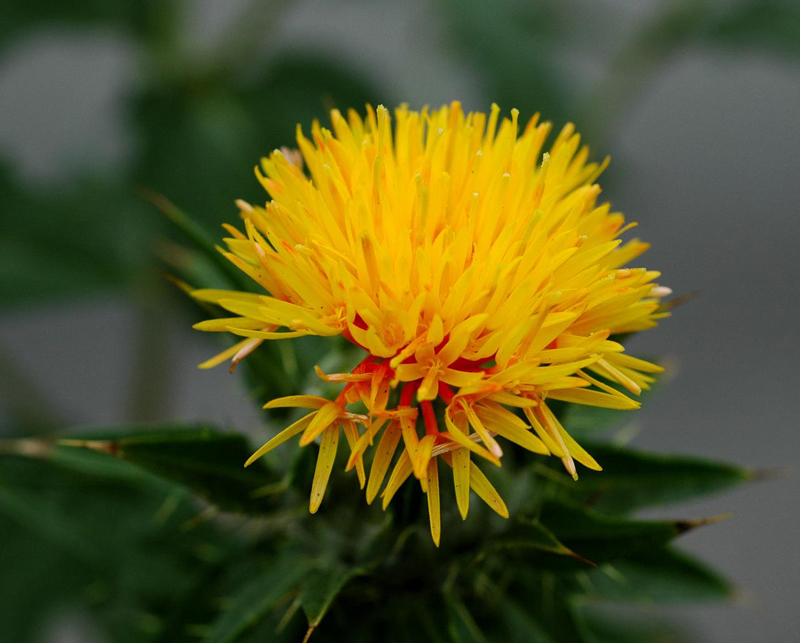 Isehan has some amazing pictures of the beni-making process, along with a video.  I'll try my best to summarize it here.  The flowers are hand-picked (usually in early-mid July), fermented, dried into cakes and then soaked overnight in water. 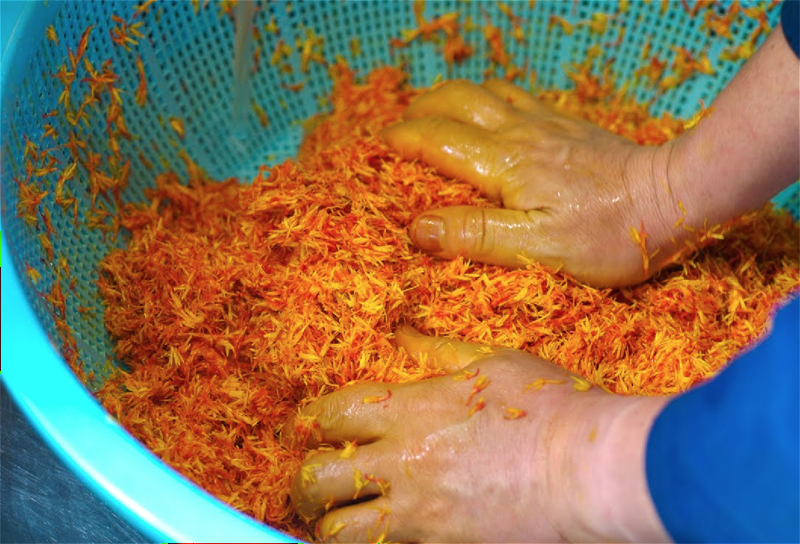 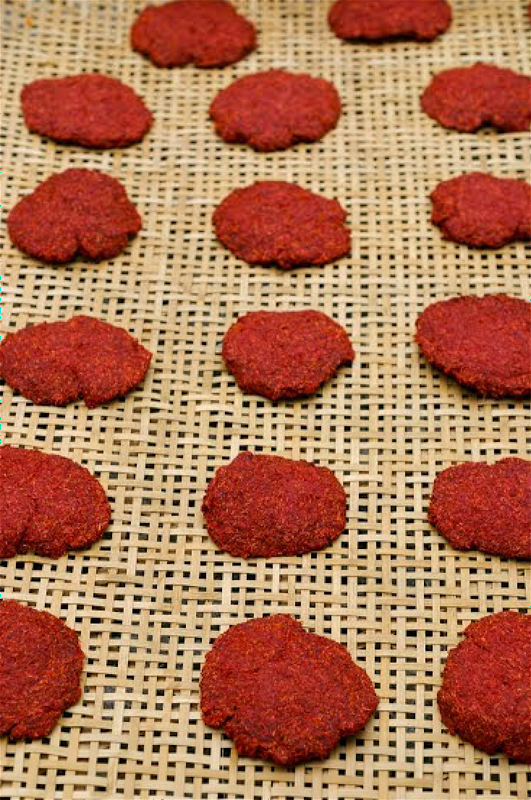 An alkaline solution is added and the mixture is pressed to extract the liquid. 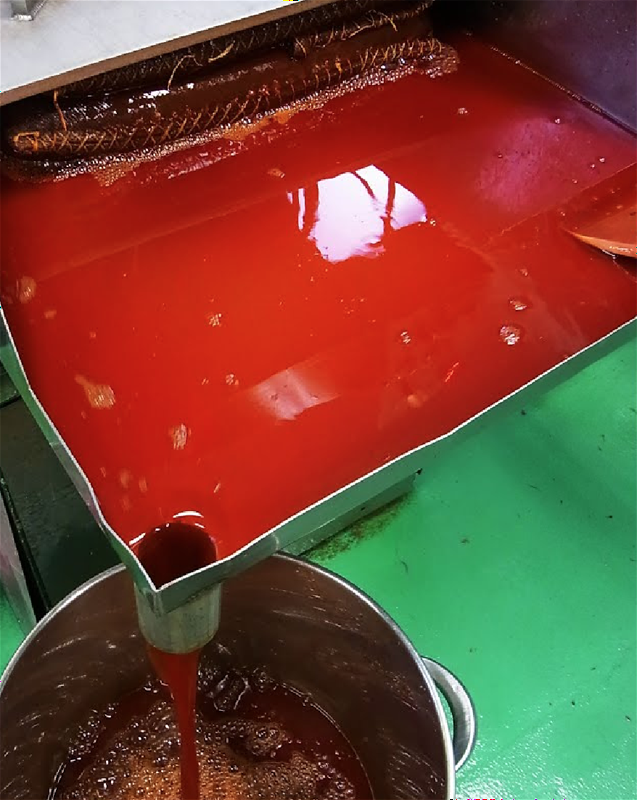 Then, an acid solution is very carefully added to separate and crystallize the red pigment.  If the acid solution is just a little off, the red will become blue or green, which is unusable.  The pigment is then strained through a finely woven cloth.  The end result is a mud-like consistency. 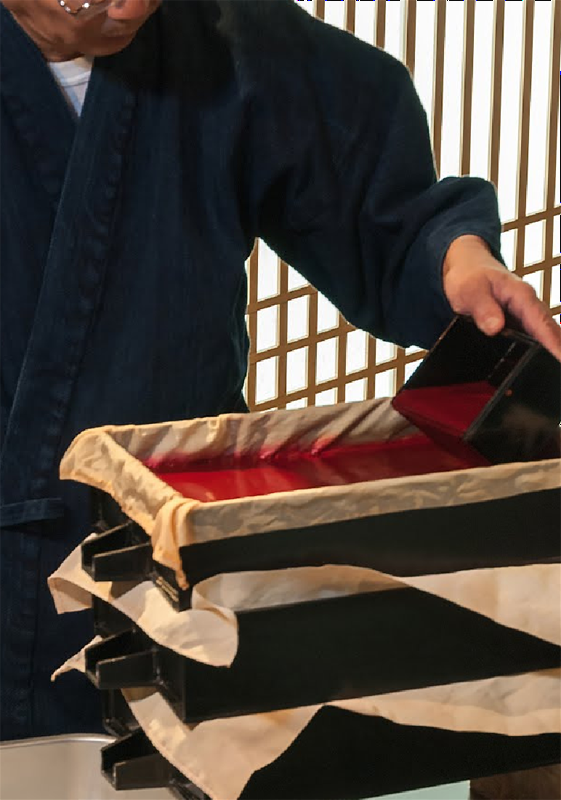 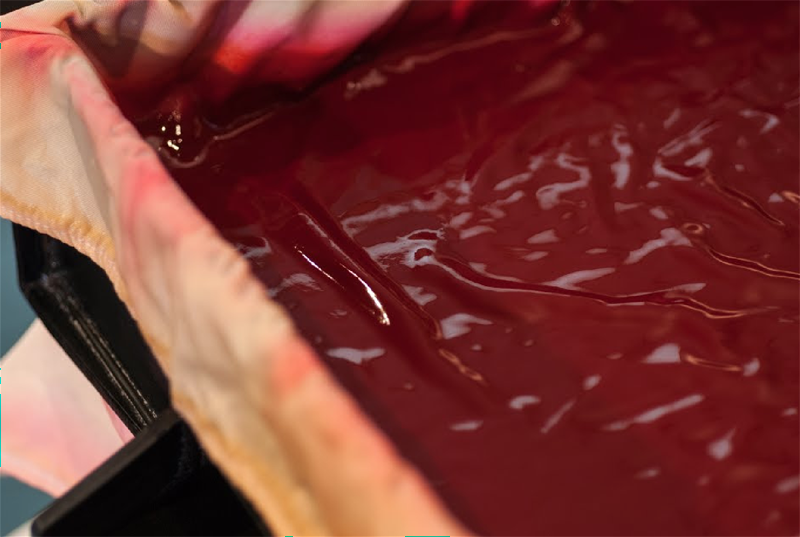 The bowls are painted and set to dry.  You'll notice it turns a beautiful iridescent green when fully dry. 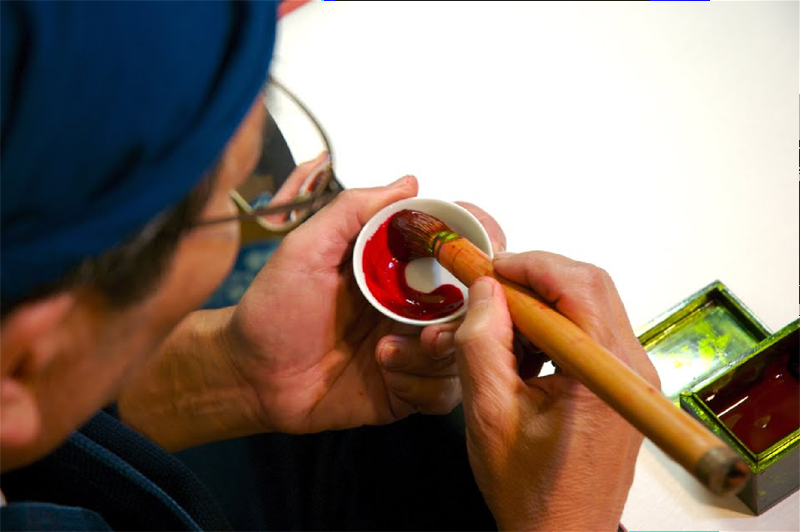 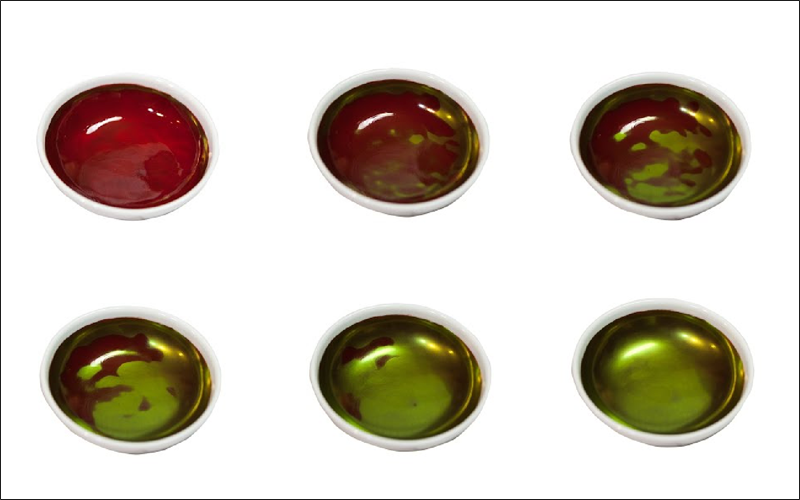 As you can see, making traditional beni is a time-consuming, labor-intensive process - although some beni is manufactured by modern machinery - but the old-fashioned methods of producing it are only way to obtain that remarkable iridescence, and only highly skilled craftsmen can coax it out of the petals.  The iridescent quality, along with the fact that the opacity can be built up by layering, or conversely, toned down by adding more water, sets traditional beni apart from other cosmetic pigments.  The video below shows how to apply it.  Texture-wise you can see it's incredibly different from Western lipsticks, which use a lot of waxes and oils to make them emollient.  Beni appears to have a thinner, non-greasy consistency like watercolor.  And the iridescence is truly stunning - it reminds me of a beetle's wing.

As Glamourdaze notes in a post on beni, an interesting piece of history regarding the iridescence was that Japanese women in the 18th and 19th centuries were fond of pairing the very subtle iridescence of the red beni on the top lip with a bold green iridescent pigment from the stem of a bamboo plant called sasa on the bottom lip.  Hence the "sasabeni" trend was born. 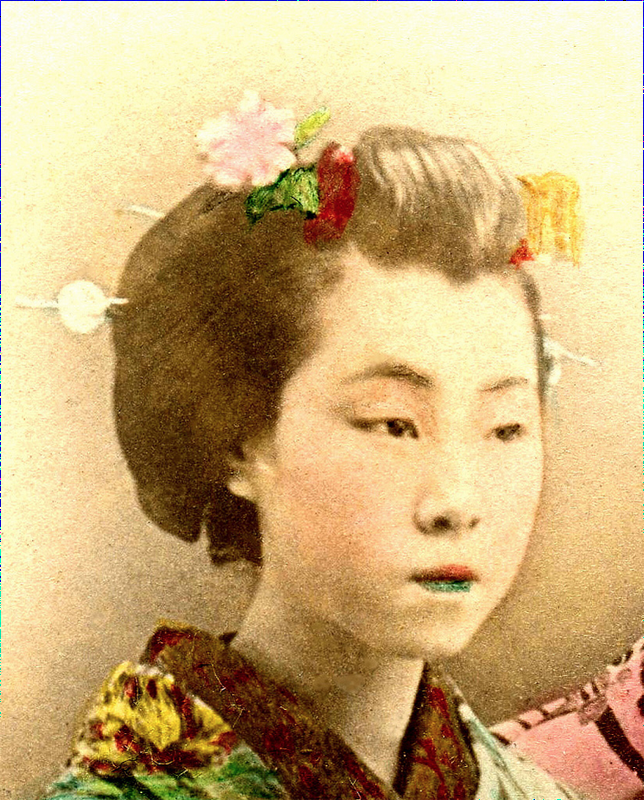 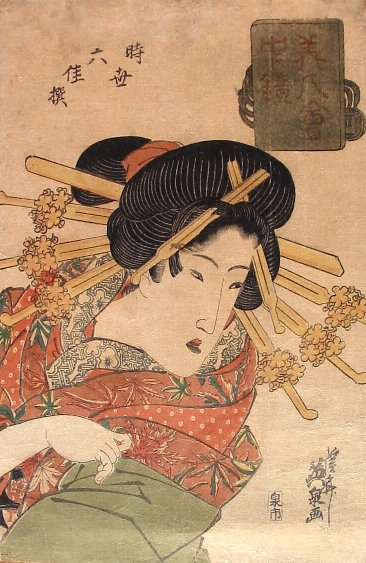 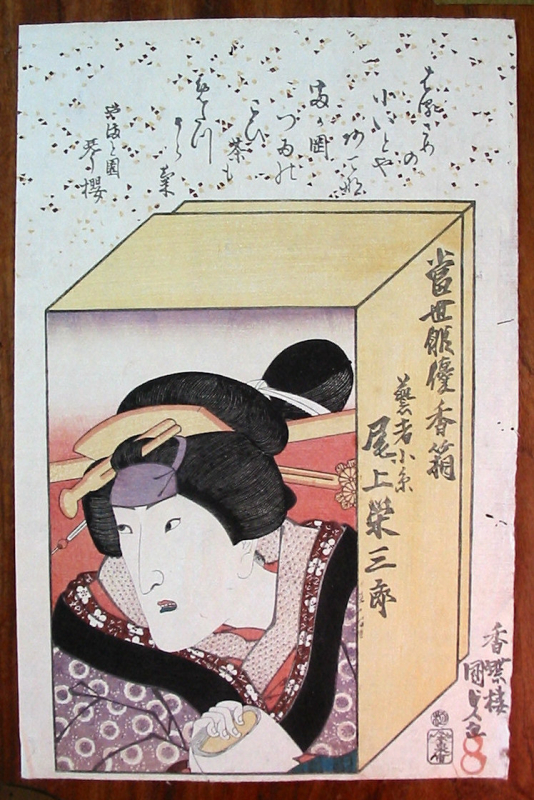 The Museum of Beni, however, claims the green came from applying a ton of layers of beni so that the green iridescence overpowered the red, and the sasa name simply refers to the green color, i.e., it wasn't actually made from bamboo.  They also assert that the look was in style only for a short period of time, between 1804 and 1829 (oddly specific dates, no?  I wonder what their source is.) 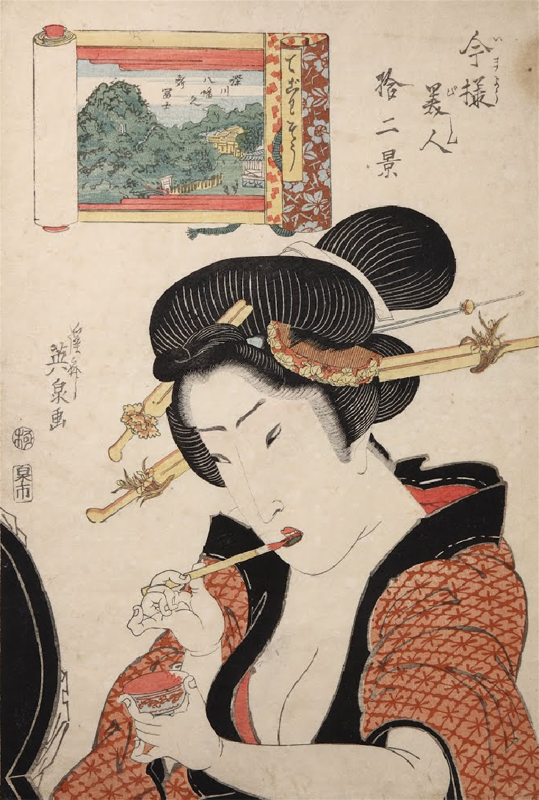 I'm all in favor of bringing back this look!  Honestly I might actually try to recreate it sometime by wearing Lipstick Queen Eden (which would be perfect as it's a dead ringer for what I've seen of beni and also has a very subtle "magical apple green holographic shimmer") on the top lip and MAC's Deep With Envy lipstick on the bottom, with a tiny dusting of the Emerald shade from Kat Von D's Alchemist palette layered on top.  Not the same, of course, but perhaps it could be viewed as a modern twist.

Anyway, as for the Museum of Beni, some may say that it's a weak cover for a source of additional revenue for the company, but I disagree.  While beni was still being used in the early 20th century, the traditional Komachi beni was largely dying out.  Bo-beni (crayons) and compacts became much more popular than Komachi, and by World War II Komachi was almost completely gone as Western style lipsticks became the norm. 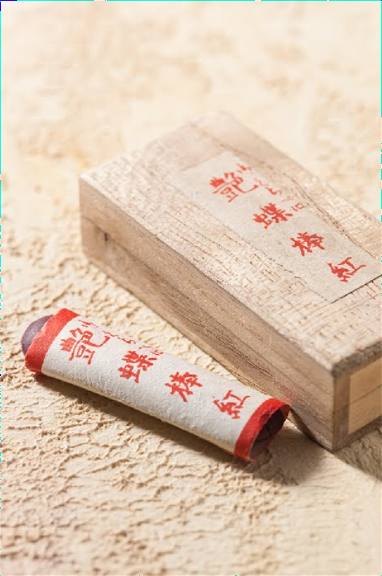 Isehan Honten wants to profit, as any business does, but I do believe their museum comes from a genuine desire to preserve the heritage of beni and introduce this historic cosmetic item to people the world over.  If I hadn't been searching for cosmetic museums I might not never have heard of beni otherwise, and I research makeup as a hobby!  Beni is still so unknown in the West that many people, myself included, were confused by NARS's attempt to bring the concept to us in 2010.  While this set is inspired by traditional Komachi beni application (i.e. using a brush to apply pigment layered in a bowl), obviously the ingredients and effect are totally different. 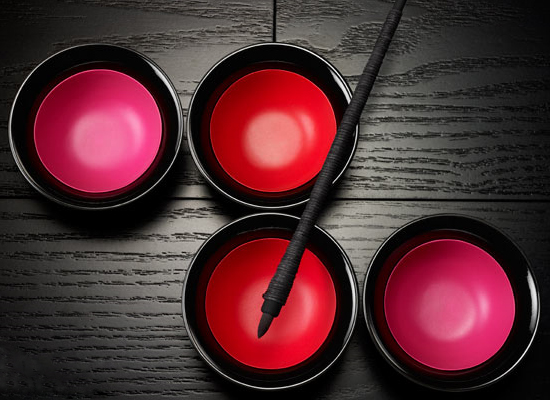 Another point to consider: authentic, high-quality beni is expensive.  In 2008 the UK's Telegraph reported that Isehan's product cost "70,000 to 300,000 yen (£335 - £1,440) for a pot holding less than a third of an ounce, or 30 to 50 applications, so an evening's use can cost up to £50."  In U.S. dollars that would come to $618 to $2,650, and I'm using the 2008 figures - it must be even more by now.  Historic French beauty company Buly 1803 also sells beni for a mere 420 euros ($446).  That's a bargain compared to Isehan.  ;)  Seriously though, I can't imagine a museum that showcases a product with such a hefty price tag would be much of a money-maker.  It might get people in the door and tempt them to buy it, but I highly doubt many visitors are actually going to drop nearly $700 on a lip product, especially when they can get a cheap knockoff intended for tourists (they're usually made mostly with food coloring and contain only a tiny bit of actual safflower). 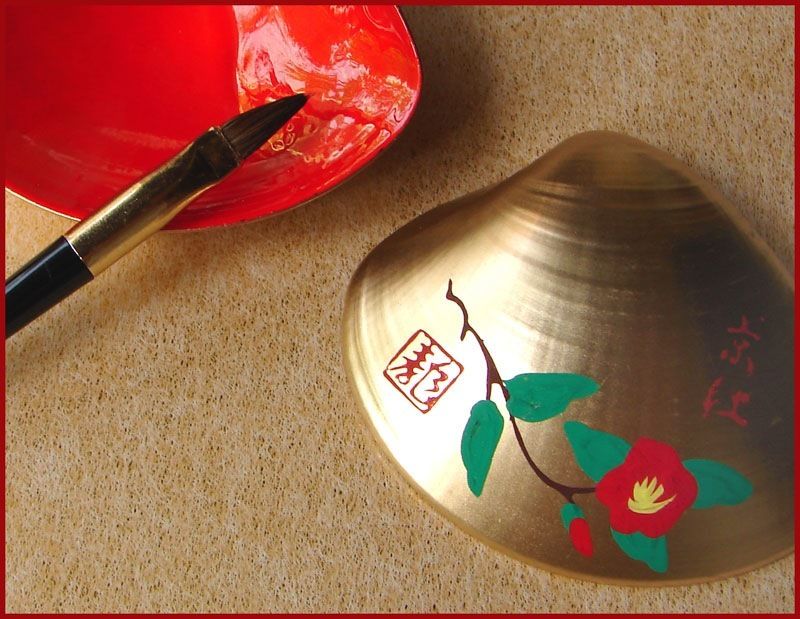 So I really don't think the Museum of Beni is a money grab.  As a matter of fact, I think Isehan Honten's museum is among the very few concerted efforts in the entire world to protect beni's heritage.   I don't think even the Pola Museum is doing as much to prevent beni from going extinct, and while some museums certainly own beni-related artifacts, no collections that I know of are as extensive as Isehan's.  It's not in their best interest from a profit standpoint to store and display all these items (why not just have a shop?) so I think they're truly dedicated to keeping the history alive.  A spokesperson for the company explains, “When we say protecting the traditional culture, it does not really mean we create a museum and just show off our products there...to help this kind of culture grow roots and stay alive, we think it’s important that it be accepted by the customers and actually gets used.”  So the salon is a way to enhance the history of beni - I see it as a tool used by the museum rather than the other way around, i.e. museum as mere retail accessory.  Sure, seeing historic cosmetic objects in cases is great, but actually being able to touch them and apply the product definitely hammers home the cultural importance of these items for the average visitor.

I hope you enjoyed this little overview of both the Museum of Beni and the product itself.  I am by no means an expert but I think what I have here is somewhat accurate.  Anyone want to weigh in?  Would you want to visit this museum?  You can see real-life pics here, if you're so inclined.  I know I must definitely make a trip!  And yes, I'd blow some of my savings to acquire beni of my very own...it's a totally unique product you can't get anywhere else, and incredibly full of culture and history to boot.