MM Musings, vol. 24: all the bells and whistles

Makeup Museum (MM) Musings is a series that examines a broad range of museum topics as they relate to the collecting of cosmetics, along with my vision for a "real", physical Makeup Museum. These posts help me think through how I'd run things if the Museum was an actual organization, as well as examine the ways it's currently functioning. I also hope that these posts make everyone see that the idea of a museum devoted to cosmetics isn't so crazy after all - it can be done! 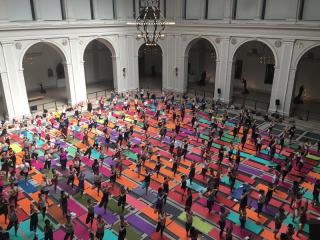 I forget how I came across this Observer article, but it was a rather eye-opening piece on how museums are upping their game in terms of what they offer besides art.  And it got me thinking about what, if any, over-the-top amenities and programs the Makeup Museum would offer if it occupied a physical space.  Let's explore that, shall we?

The article discusses the rise of extra offerings for visitors that goes well beyond the scope of the museum's mission, including fitness and yoga classes (the latter is a huge trend, apparently), world-class restaurants and programs for specific populations.  The goal of all these amenities, obviously, is to attract more visitors overall and turn regular visitors into donors.  "All over the country, museums have been looking to change their image from boxy buildings that just store and exhibit cultural objects to community gathering spaces with activities for preschoolers, teens, single adults, families, the elderly and probably some other demographics...It is the hope on the part of museums that this effort to make their institutions gathering spots for their communities and to view the population as customers whose needs are to be met will turn casual visitors into members, some of whom may become donors and board members."  While I haven't found any official studies on whether these sorts of things actually increase the number of visitors and donations, they comprise an interesting marketing tactic worth looking into.  However, I must point out that some of the "extras" the article highlights, such as community outreach programs, shouldn't be viewed as additional amenities, they should just be part of regular programming and services.  I don't think electric carts for elderly visitors should be lumped in with, say, having a Michelin-starred restaurant.

Anyway, I can envision the Makeup Museum adopting similar programs to the ones mentioned.  I had always planned on an excellent gift shop and cafe, not to mention that the museum building would be beautifully designed and have amazing signage/collateral (e.g. museum maps, exhibition labels, etc.).  But reading the Observer piece makes me think that perhaps the Museum could offer a fitness or yoga class - maybe have one of those so-called "athleisure" makeup brands sponsor it and offer free product samples to people taking the class.  Other programs might be a decorate your own compact night or an "apothecary" workshop on how to make natural pigments and serums (similar to this setup). For kids, we could have finger painting classes using old makeup - lord knows I have a ton of stuff I don't use anymore but would still be safe to use for artistic purposes.  I think any cosmetics museum-goers might want to have these sorts of things available to them in addition to the standard tours and exhibitions.  As the article notes, “Our expectations of going to museums increasingly are like our expectations when going into a Starbucks: We want things to be tailored to our individual likes and interests."

On the other hand, though, I do see these sorts of extra programs and services being problematic, particularly for a cosmetics museum.  As the article points out, one issue is the possibility of objects getting damaged or destroyed.  This little nugget was truly horrifying:  "Marcy Goodman, a museum-planning consultant in La Crescenta, Calif., who developed the plans for the Bruce Museum’s expansion, said parties should not take place in the actual galleries. 'Some years back, an art museum in Oregon hosted an all-you-can-drink event in a gallery where, among other things, some people ended up having sex on a Henry Moore sculpture,' she told the Observer."  Meanwhile, New York Magazine asks, "How long until someone breaks a priceless piece of art during the Met Museum workout?"  Museums already have to deal with careless people breaking things, why invite even more of it if it's not crucial to the mission?

Secondly, these sorts of programs might distract from a museum's true purpose.   Do you want visitors to actually, you know, pay attention to the displays or visit simply for the frills?  It's a really tough call since museums are dependent on visitors - this is a key benchmark for receiving funding and sponsorships - but you don't want to turn a museum into something it's not.  Plus, as we learned with exhibition display, one has to be very careful in making sure a museum devoted to cosmetics doesn't morph into a store.  I don't think I'd sell makeup in any capacity at the Museum, not even in the gift shop.  It's a museum, not Sephora!  (One caveat:  I think the recently discussed Museum of Beni and its accompanying store is an exception to selling makeup in a museum setting.)  And sponsorship by makeup companies for special workshops and classes is problematic, since you want people to have learned something about makeup history, not be exposed to what amounts to glorified advertising.  Yes, people's expectations of museums are more on par with those they have for businesses like Starbucks, but frankly, museums aren't businesses.  Even if they partner with and receive funding from businesses, museums need to stay firmly on the nonprofit side.  That would be particularly difficult to do with a cosmetics museum - the kind of showiness and gimmicks you'd see in retail needs to be kept at bay lest you "sell out" and lose sight of the museum's true mission.

Finally, and I think this is the core issue for me, is that I would probably not engage in all the extras and simply put all funding into making the Makeup Museum as accessible as possible for as many people as possible.  While the some of the amenities mentioned in the article are nice, they're not necessarily critical to people's understanding of the art.  And let's face it, funding for museums is so scarce, there's no way I'd be able to afford most of the things I'd love to have, like fancy architecture and an internationally-renowned cafe.  Even if I did have this sort of money, I think I'd spend it on, say, making the museum's resources - everything from pamphlets to audio guides - available in just about every language.  Instead of yoga classes, the Museum would offer state-of-the-art touch-tour and 3D printing technology so that blind visitors can have a richer experience.  Funding that would pay the salary of a world-class chef for the cafe would instead go to ensuring the Museum remains free.  And I maintain that kids' programming is a necessity, but the Museum could go a little further and have programs just for special-needs kids (like this.)  This ties back into what I noted earlier:  some of the programs the article talks about should not be perceived as extra.  In addition to my other ideas, I'd be all over those community outreach programs!  The bottom line is that I'd definitely focus less on the frills and more on accessibility, inclusiveness and civic engagement.  Specifically what that would consist of will be explored in later installments of MM Musings. ;)

Thoughts?  Would you like to see crazy, over-the-top amenities at a makeup museum?