While color correcting seems like a new trend, my experience as a self-taught makeup historian tells me that it probably existed decades ago.  However, I had no idea that color correcting was in effect as early as 1917, when Japanese company Shiseido introduced their "rainbow" face powders.  In honor of the 100-year anniversary of this cutting-edge beauty development, Shiseido released the 7 Color Powders Centennial Revival Edition (that's a mouthful!), which is essentially a re-creation of the original powders using contemporary color correcting technology and ingredients.  The powders come in a gorgeous keepsake box adorned with concentric metallic rainbow lines. I am very fortunate to have such a kind and generous husband who procured this set for me for Christmas. :) 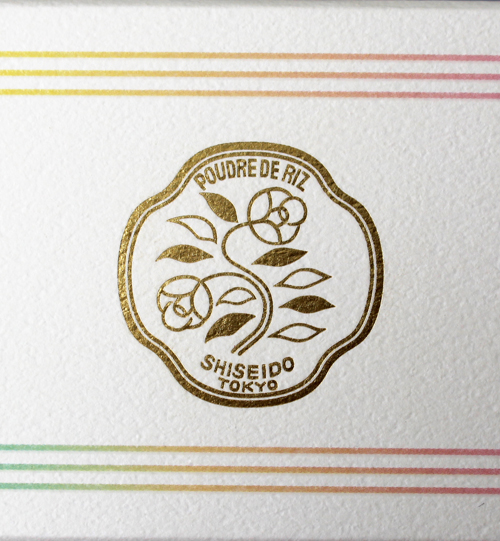 Does anyone know what this means? 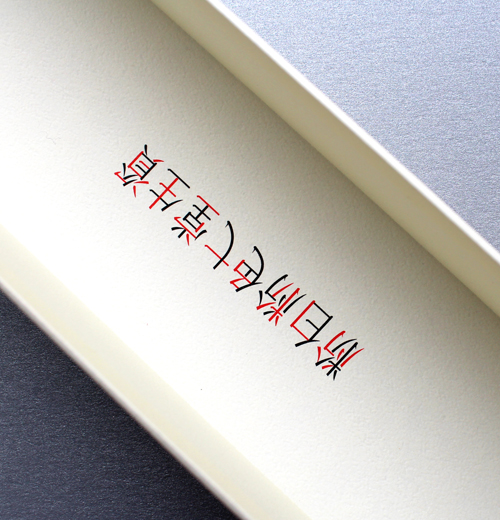 I always get positively giddy over a numbered edition.  In the eyes of a collector, numbering makes the item seem really special...even if there are 9,000 of them produced! 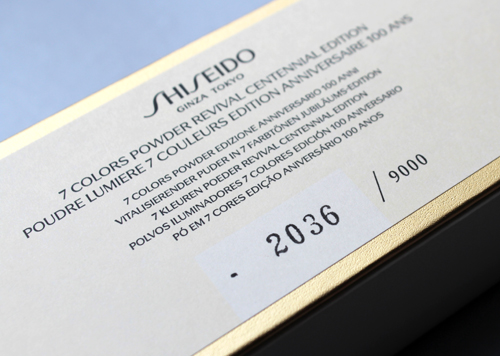 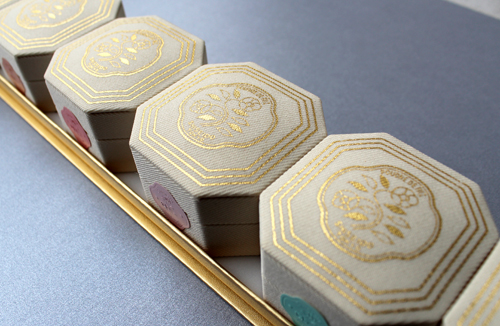 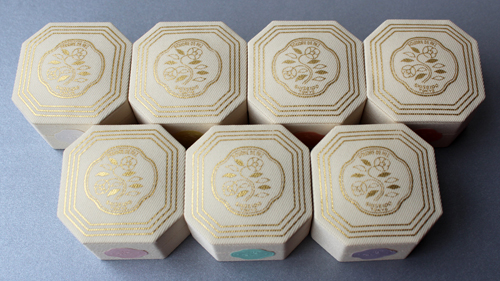 The box design is nearly identical to the original.  Shiseido was ahead of its time back then not just for product innovation but also for packaging.  Chapter 3 of an excellent dissertation entitled "Imperial Designs:" Fashion, Cosmetics, and Cultural Identity in Japan, 1931-1943" by Rebecca Nickerson sheds light on the design process.  In 1915 Shiseido's founder, Fukuhara Arinobu, unofficially passed ownership of the company to his son, Fukuhara Shinzo, who had been traveling domestically and abroad to study art and photography for a number of years prior.  The younger Fukuhara used his passion for art and aesthetics to form an official cosmetics division for the company and in 1916, he appointed a design team consisting mostly of artist friends he had met during his travels to create sophisticated, appealing packaging for all of Shiseido's products.  The creation of such a group, focused on cohesive design and marketing, was cutting-edge for the time.  Their artistic skill proved quite effective: "The design team came up with unique packaging for the face powder.  Each of the seven colors was in its own original eight-sided, white satin box, and the lids were embossed with two concentric gold lines and Shiseido's camellia logo.  Above the logo were the words 'poudre de riz', the French term for face powder, and below it in Roman letters, 'Shiseido, Tokyo'.  The package design was simple yet sophisticated and conveyed a sense of the foreign, which was exactly what Fukuhara wanted consumers to associate with the Shiseido brand. This was Shiseido's second attempt to introduce Western face powders to Japanese consumers.  While most women could not afford or had little interest in Western face powders in 1906, by 1917 consumption was on the rise and greater numbers of women were eager to embrace this new trend in beauty culture.  The flood of modern Western culture, Hollywood films, and a general enthusiasm for 'Americanism' also increased demand for modern fashion and cosmetics.  Shiseido was one of a number of companies to introduce similar face powders around this time, and the 'Rainbow Face Powder' succeeded in making Shiseido a visible player in the cosmetics market." (p. 103). 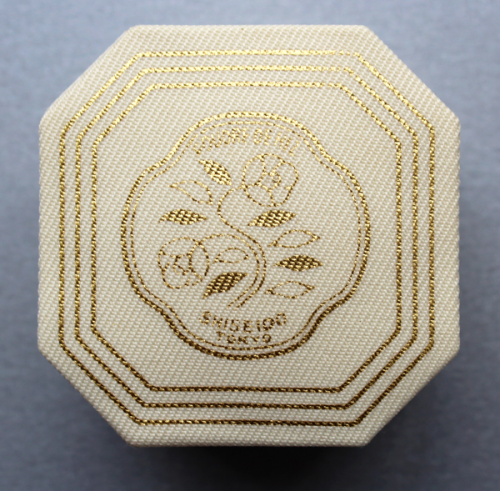 I was so hesitant to try to peel off one of the seals to open the box, but I managed to do so without ripping it. 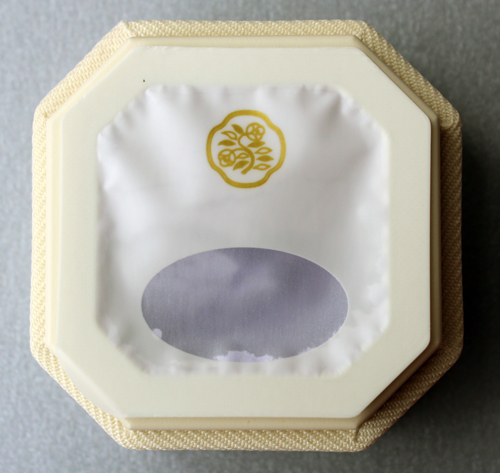 For comparison's sake, here are photos of the original powders and you can see more pictures of them from the Shiseido Museum here.  I think the only differences are that the new revival ones are covered in a fabric material whereas the old boxes seem to be made from cardboard (I don't think it was satin), and the camellia logo is at the top of the powder covering in the revival versions - the originals don't seem to have the logo on the inside.  I'm guessing the old ones didn't have the color-coded seals on the boxes either. 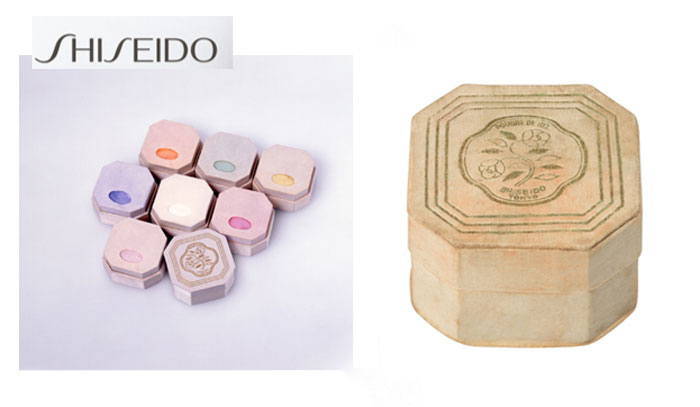 Anyway, why were these so groundbreaking?  Well, besides the design, colored face powder didn't really exist back then.  I've mentioned this excellent paper from art historian (ahem) Gennifer Weisenfeld before, but here's another excerpt explaining why these were a breakthrough: "Tinted face powders were exceedingly rare in prewar Japan and Shiseido pioneered them early on with a series of colors under the brand name Poudre de Riz. The female entertainers (geisha) who worked in nearby Shinbashi and who were loyal Shiseido customers particularly liked the green and purple powder colors because they were thought to flatter the complexion under electric lighting."  Not only did these powders have color correcting ability in less than ideal lighting conditions, Shiseido maintains they were a way for women to "match their face powder shade to their attire."  This was in keeping with the shift towards more Western styles and a desire for more natural looking makeup.  "Gradually, as Japanese cosmetic practices changed over time and moved toward a greater naturalism, the traditional thick white cosmetic foundation (o-shiroi) ceased to be used for daily wear." Finally, the rainbow powders, quite simply, were among the first steps in customized makeup that encompassed a much wider range of colors than were available previously.  This in turn allowed Shiseido to reach a significantly greater portion of the cosmetics market, since the colors could be mixed to suit one's skin tone. Says Jessica Guerra, author of "Consumerism, Commodification and Beauty: Shiseido and the Rise of Japanese Beauty Culture" (another fantastic scholarly piece!), "Through different combinations of the seven provided colors, consumers could create their own shades and color palettes. Understandably, this would mean increased international appeal and marketability as racially diverse consumers could purchase Seven Colors Face Powder and create their own personalized shades based on preference." (p. 29).  Indeed, even today Shiseido touts the customization ability of the revival powders, noting that they also give one "the freedom to experiment and create the most beautiful finish for your skin."

Shiseido hadn't completely abandoned the idea of reviving their rainbow powders until now.  I couldn't read this whole article because it's behind a paywall (thanks, jerks), but apparently in late 2001 the company released a rainbow powder available only to their Camellia Club members:  "Shiseido has resurrected a face powder-Rainbow Face Powder-that debuted in 1917 but in a way geared to the woman of the 21st century. The debut product featured seven colors-white, yellow, flesh, rose, peony, green, and purple-instead of the typical white to offer women the shade that best enhanced their facial features and to create an appearance more suited to the increasingly popular Western-style fashions. Renamed La Poudre Ruisselant, the face powder is sold in specially designed container with lids shaped like a camellia blossom-the symbol of Shiseido."  I tried my darndest to find a photo of this "specially designed container" but only turned up a picture of the refill. 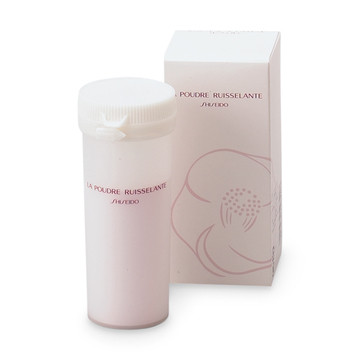 While I couldn't find a photo, I do think it's interesting to note that Shiseido tried revamping their rainbow powders previously.  Maybe in 2001 the makeup world at large wasn't yet receptive to color correcting and that's why Shiseido offered the Ruisselante powder to only a handful of consumers.  But as color correcting has been all the rage for the past couple of years, now is a great time to re-introduce these to the public, not to mention the fact that it syncs perfectly with the 100th anniversary of the products' debut.  I love how they updated the packaging too - very similar to the original but just enough details to make it modern and special enough to commemorate the anniversary.  I'm still drooling over the shiny rainbow on the box, and the numbering...well, that's like collector's catnip.

What do you think of this set?  Do you color correct at all?  I do but with liquid or cream concealer rather than powder. :)