Friday fun: This egg is not sunny side up

Back in the early fall I saw some beauty items with a very strange-looking character pop up on Instagram.  He looked kind of cute though and I was immediately intrigued.  I made a mental note to show the husband later because, well, I just had a gut feeling he'd like him too.  But later that very same morning the husband sent me an interview with the designer for this Japanese character and asked if I had heard of it.  It's proof of how well we know each other - we just had a feeling we'd both be smitten with this little egg, who has taken the world by storm since his introduction in 2013 by Sanrio (the company responsible for Hello Kitty).   Without further ado, please watch the very short video below for an introduction to Gudetama, a.k.a. the lazy egg!

I don't know if Gudetama is entirely lazy; there seems to be some depression, apathy, slight existential (eggsistential?) angst and general malaise mixed in with the laziness.  In other words, this egg is me. 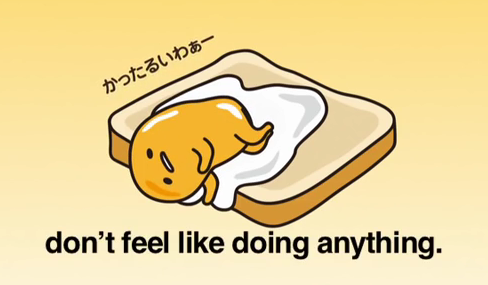 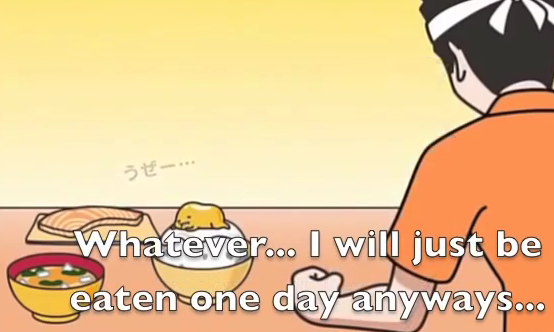 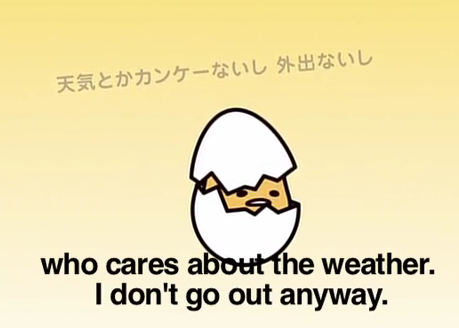 Gudetama was the runner-up in a contest at Sanrio to devise a food-themed character.1  The designer who created him2, Eimi "Amy" Nagashima, had joined Sanrio just a year prior.  In an interview with AIGA (the very same interview the husband sent me that fateful morning), she tells the story of how Gudetama came into existence. "I was eating a raw egg on rice at home one morning and thought to myself that the egg was kind of cute, but entirely unmotivated and indifferent as well.  Eggs are phenomenal! The taste, lustre, nutritional value, and countless ways they can be prepared make eggs great, but for me, eggs that are relegated to the fate of being eaten also seemed despairing.  They seem entirely absent from any effort or energy, almost as if they were sick of the competitive world around them.  The personality I was imagining seemed to me to parallel people in modern society who despair amid economic hard times and who are talented but don’t feel like throwing themselves into anything...I try to reflect images of the people of modern society that I see in the news. I also draw on the so-called “Yutori” generation of people that have graduated from a good university but in economically challenging times, so feel hopeless and just cannot be bothered to make an effort...I never dreamed that Gudetama would become so loved and pervasive. When it debuted, I wondered if it might end up a flash in the pan."

Indeed, the winner of the in-house Sanrio contest, a slice of salmon named Kirimi-chan, is not nearly as popular as Gudetama in terms of social media following or the number of products he's appeared on:  Gudetama has made his way onto 1,700 items, including two very extensive collections with Korean beauty brand Holika Holika.  Before we dive into the massive amount of items I purchased from these collections, let's continue to egg-splore (sorry, can't help it) Gudetama's appeal.

To Westerners, the idea of an anthropomorphic egg seems entirely bizarre, but in Japan, it's rather normal. Explains Manami Okazaki, a journalist who published a book on kawaii culture, “Japan has a long history of making food aesthetic, and merging food presentation and art...given that kawaii is one of the most prominent contemporary movements and resonates with most youth in Japan, it isn’t much of a surprise that food merged with kawaii design."  As for the sad personality, it's also not unexpected. Matt Alt, co-founder of pop culture translation company Alt-Japan says, "Many Japanese mascots will express emotions that Western mascots would not. In the West, mascots are used almost exclusively to cheer people up. In Japan, they’re often used to get a point across or act as mediators in situations where you wouldn’t want to express yourself directly...Mascots serve as blameless mediators and tension breakers of conflict in Japan. So a mascot that isn’t happy? That’s very familiar to the Japanese."  And while some argue that Gudetama represents the somewhat repressed nature of Japanese society, Alt disagrees:  "It’s true that Japanese society values considering the needs and thoughts of others. Especially in public. But that doesn’t mean Japanese people are incapable of articulating themselves.  I would say using mascots such as Gudetama is a more nuanced way of expressing oneself than simply verbalizing an emotion or typing it out. This is exactly the reason Japan is the country that invented emoji — those little blips and icons used to spice up a conversation by injecting an emotional quotient.  I don’t think you can look at Gudetama — or any mascot or emoji — and say they’re the product of an emotionally stunted civilization. They’re the product of a society that has found alternate and interesting methods to express itself."  Finally, while Gudetama's popularity in the West may seem odd at first, it's also not that big of a surprise, according to this article:  "Gudetama is also considered part of a new kawaii subculture called kimo-kawaii, or gross-cute, which is resonating more with underground youth culture than the sweetie-pie characters of yore...In the West, where weird for the sake of weird is a well-established marketing technique, kimo-kawaii characters are a natural fit. The U.S., especially, has a longstanding love of characters with bad attitudes..."  I also think Gudetama particularly resonates with depressed people, of which there are over 15 million in the U.S. (including yours truly).  Also, I love the fact that he uses bacon as a blanket!!  Or mushrooms/tofu as pillows, unsuccessfully.

Anyway, after watching nearly every Gudetama video I could find I picked out some (okay, too many) things from the Holika Holika collections.  The first collection, called Lazy & Easy, debuted in May, and the second was a holiday one called Lazy & Joy.  There was just so much variety - Gudetama appeared in so many different permutations that I simply couldn't narrow it down much. 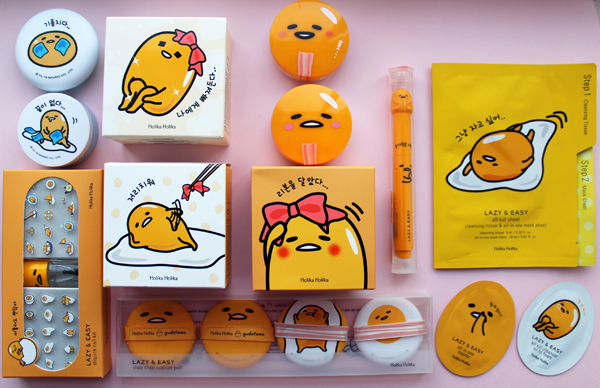 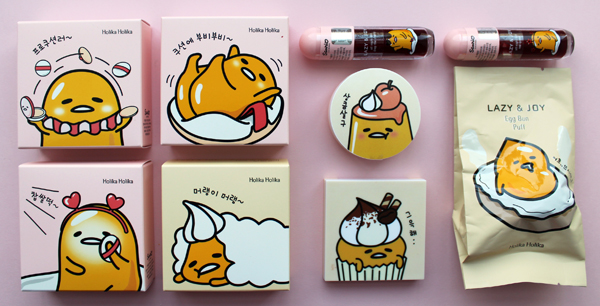 I love the outer packaging...look at the bacon tape!! 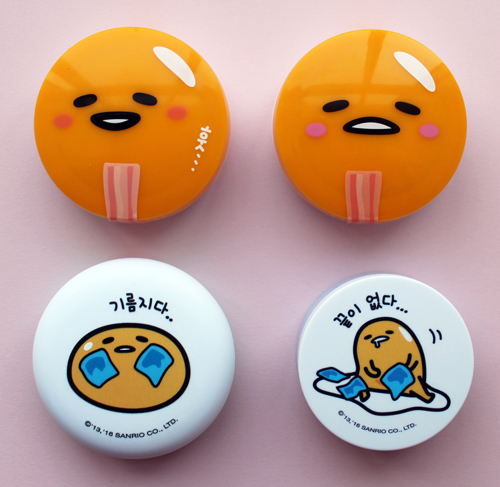 The inserts were also ridiculously adorable. 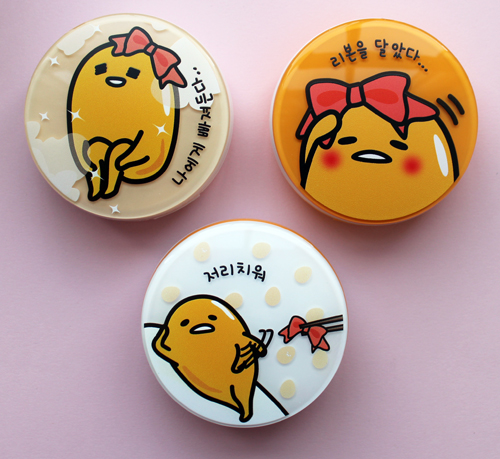 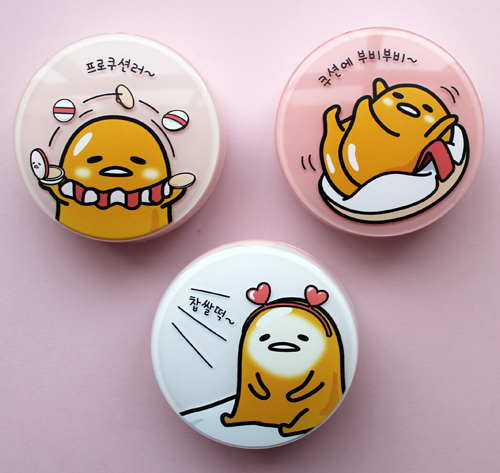 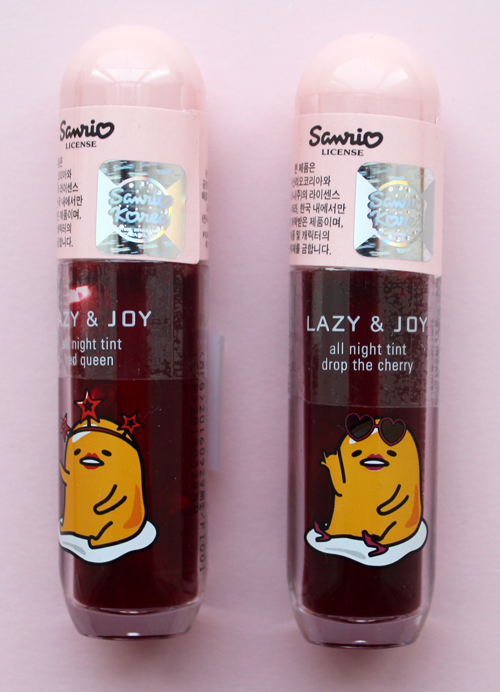 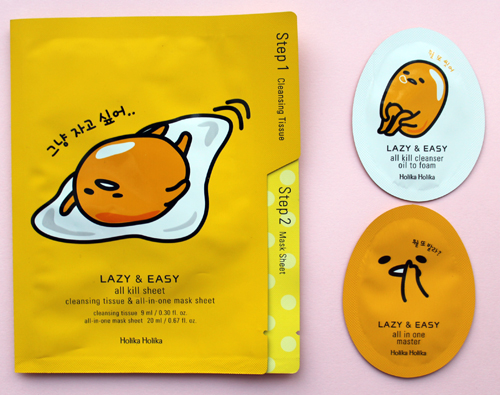 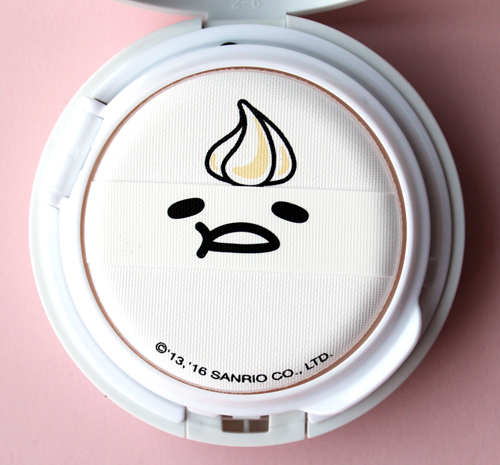 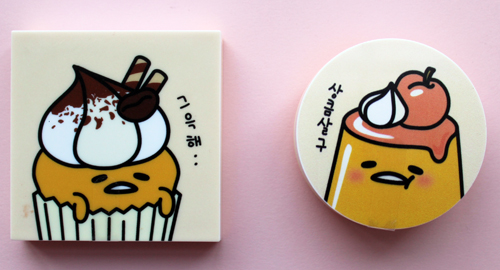 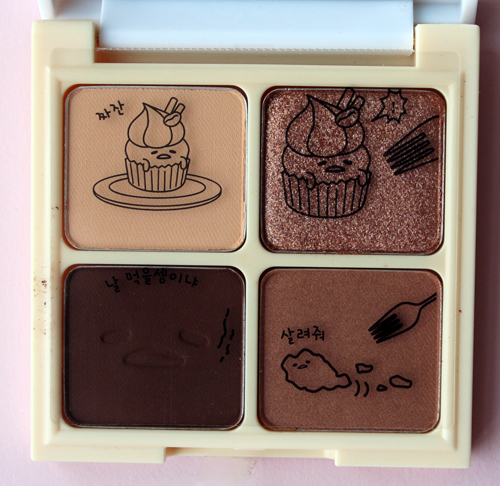 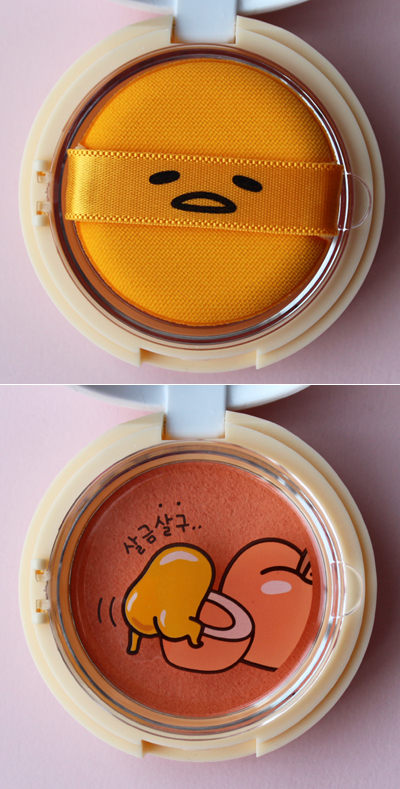 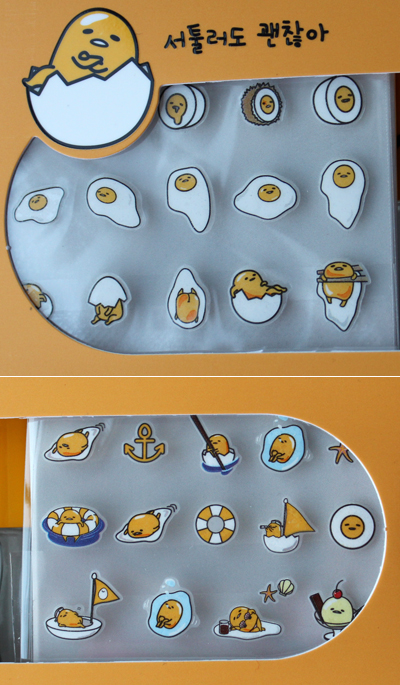 I must admit that I have a bit of an obsession with Gudetama's butt (and I'm not the only one).  Seriously, how cute is that little tuchus? 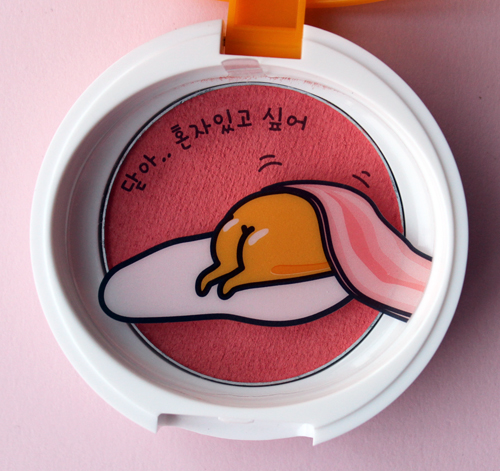 This is not accidental, either.  Gudetama's creator says of the animations, "Mostly we want [them] to be something easily relatable, and also place importance on Gudetama’s jiggly bottom...I get really obsessed with making the lines for its bottom." 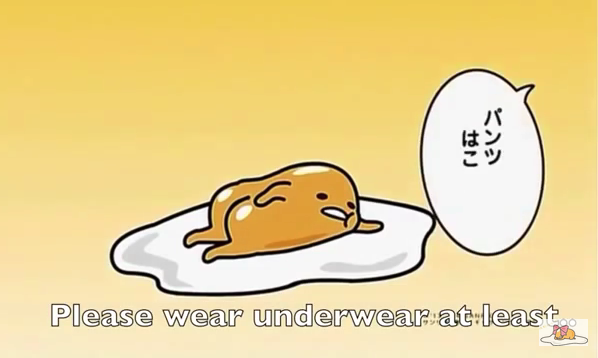 Ouch! You added too much spice! 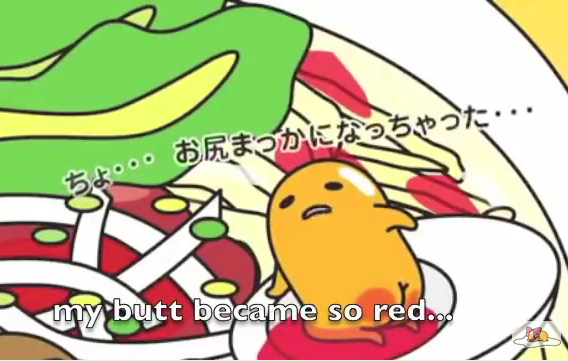 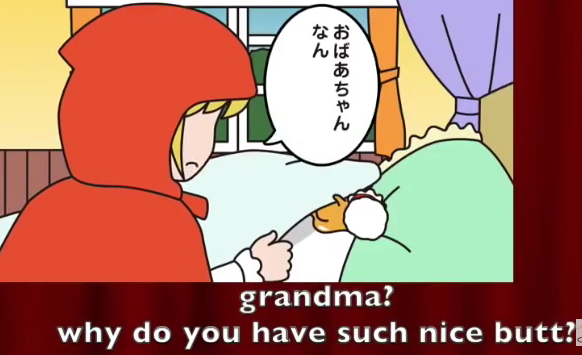 While I did get so much that Museum storage is overflowing, I'm still hunting for the dry shampoo...the hair just cracks me up!

So, a very simple summary: I love Gudetama and am very happy he appeared on beauty products.  The husband adores him too and so we added a Gudetama plushie to join our menagerie - he's settling in rather well, since our plushies are definitely on the lazy side.

What do you think?  Had you heard of Gudetama prior to the Holika Holika collection?

1While I love Gudetama with all my heart, I am dismayed that Soygeisha, a block of tofu that wears makeup, wasn't closer to winning.
2Nagashima says that the character is "devoid of gender", but for an easier time with pronouns I'm referring to Gudetama as a "he", which is the usual way he's described.