Murakami for Shu Uemura, round 2

I thought I'd get the holiday ball rolling with Shu's latest collection, their second collaboration with world-renowned artist Takashi Murakami.  The video above brings the collection story to life: "One late night in Tokyo, a young woman gazes up at the sky, dreaming of adventure and discovery.  Suddenly the infinite darkness is animated, a myriad of vividly colored flower-stars dance across the sky.  The wide-eyed, beaming flower-stars sweep her away on a cosmic journey, illuminating a new universe of beauty, and a galaxy of hope beyond her imagination."  As charming as the video is, I have to admit that the story, along with the packaging, didn't wow me at first glance.  And to tell the truth I'm still on the fence as to whether I really like this collection.  Let's see why.

I picked up two items, the Cosmicool palette and the cleansing oil. 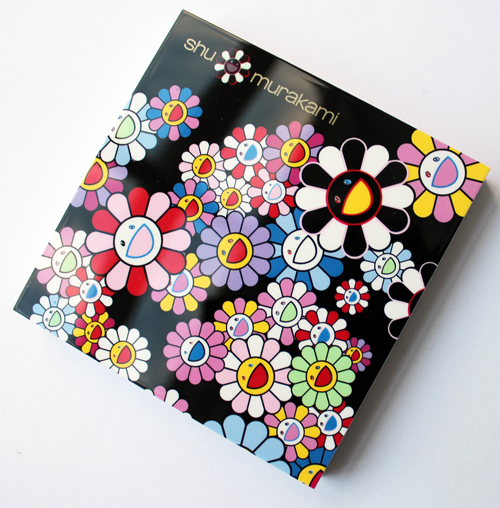 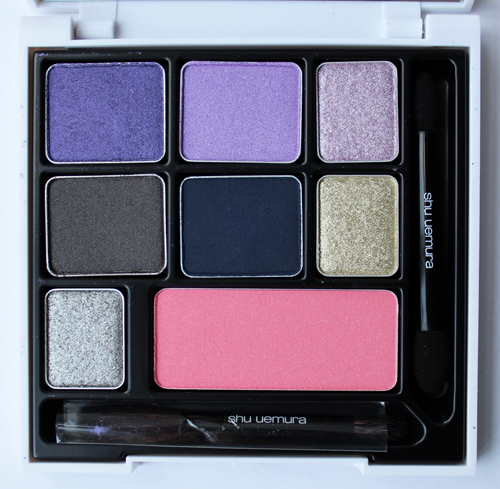 These crazily grinning flowers are probably Murakami's most famous motif (they even had the privilege of taking over an entire room at Versailles), so it makes sense that they would end up on the Shu packaging.  Still, their use left me feeling a little underwhelmed.  Off I went in search of some deeper significance for Murakami's flowers in the hopes of finding the Shu collection to be more inspired than it first appears.

According to a 2002 interview, Murakami spent much of his early days drawing flowers: “When I was preparing for the entrance exams for the University of Fine Arts, I spent two years drawing flowers. I drew some every day. And the entrance exam in the Nihon-ga section also involved flower drawing. Afterwards, to earn a living, I spent nine years working in a preparatory school, where I taught the students to draw flowers. Once every two days, I would buy flowers for my lesson and make compositions for the students to work on. At the beginning, to be frank, I didn’t like flowers, but as I continued teaching in the school, my feelings changed: their smell, their shape – it all made me feel almost physically sick, and at the same time I found them very ‘cute’. Each one seems to have its own feelings, its own personality.”  I found that last sentence to be quite intriguing, since all of his flowers seem to have the same personality, yes?  It would seem that they're all happy and smiling, as in these examples. 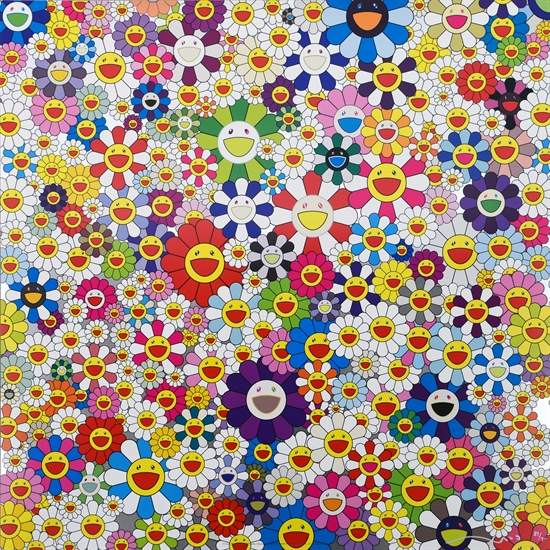 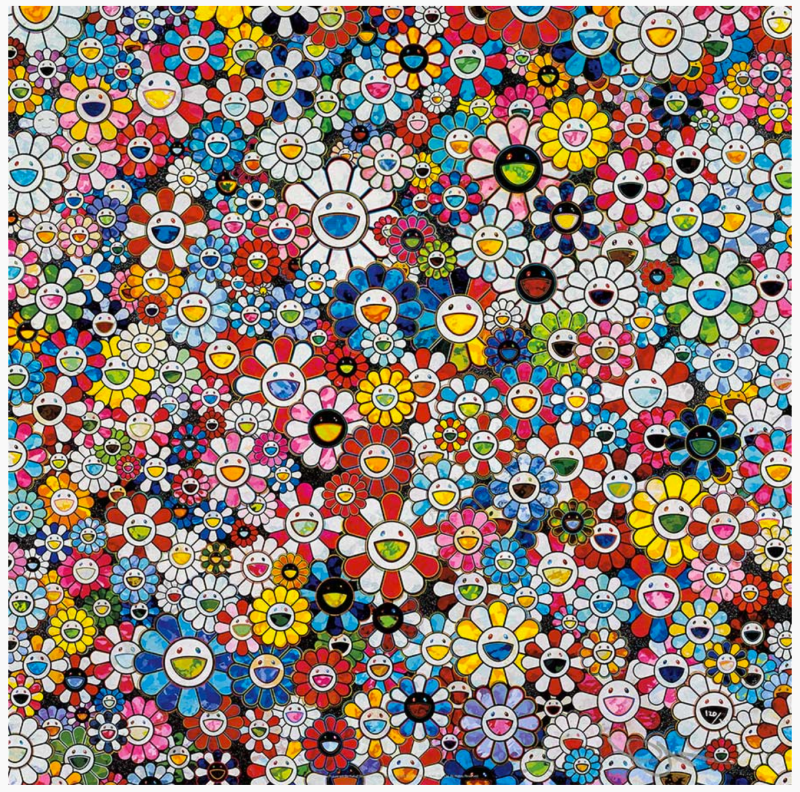 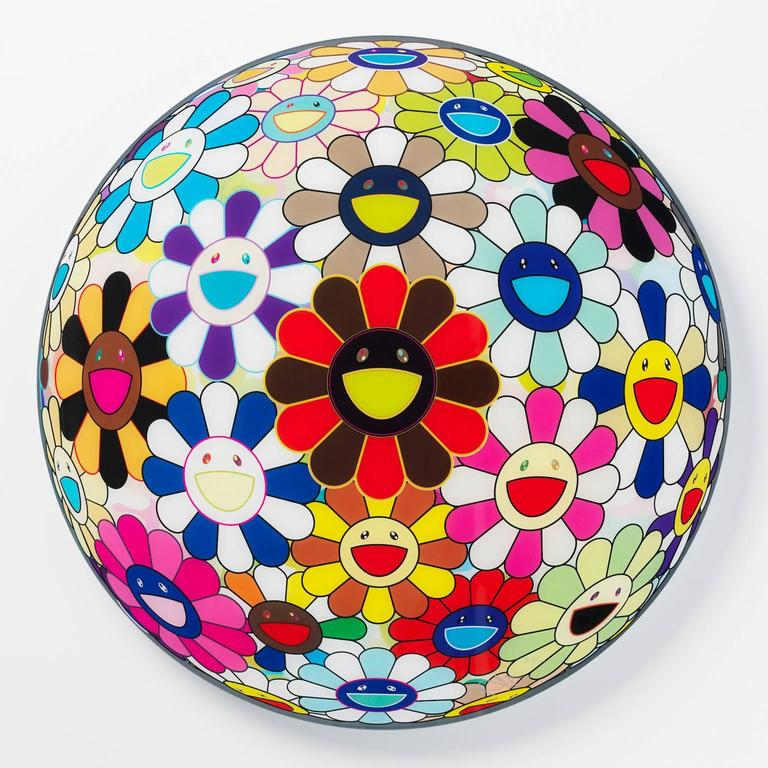 However, Murakami's ambivalence towards flowers - simultaneously finding them both "cute" and unappealing - is actually expressed in many of his flower works.  In this article from 2011, Murakami explains how the bombing of Hiroshima and Nagasaki was a key influence in the formation of his style, along with American and Japanese cartoon characters:  "There is brightness. But my real story has a kind of darkness...I expanded it to include some of the characters that you see in my work...Mickey Mouse and the characters from Japanese games. There is the contrast between the cuteness and the cruelty. And the sadness and the cruelty and the cuteness are symbolized by the characters. So this is how my early work began. As an expression of sadness and cruelty.”  If you look closely at some of the flower paintings, some of them aren't smiling; on the contrary, they're crying.

A weeping flower can be found towards the upper right in this one. 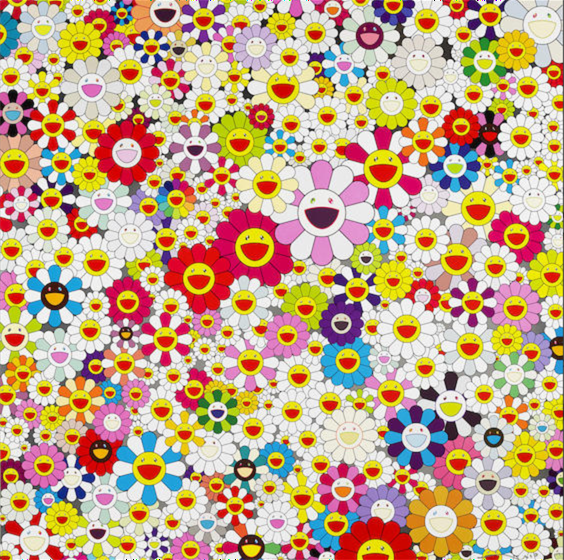 I zoomed in and cropped the image so you can see it a little better. And another on the right, it's a small flower with pale pink leaves and a white center. 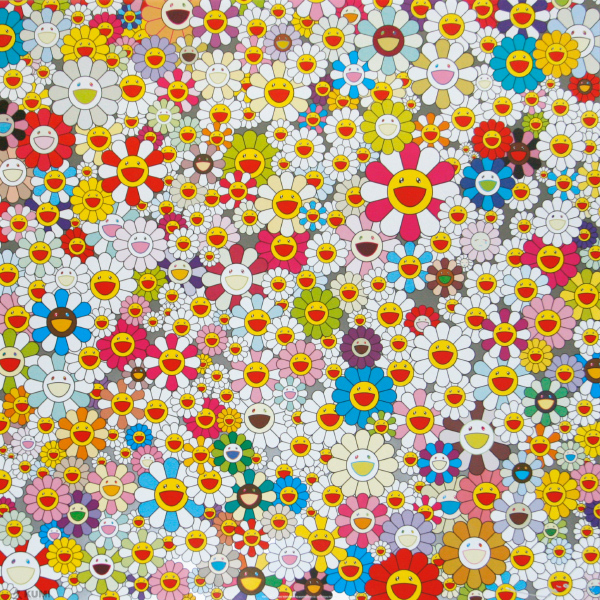 Murakami's work went especially dark in 2012, when he interspersed skulls with flowers for an exhibition at the Gagosian.  The collection of 28 works for the exhibition continued one of Murakami's "central dichotomies of his art—between joy and terror, his optimistic magnanimity as an artist and his pessimistic perspective on postwar Japan."  But it was also a response to the 2011 earthquake and tsunami.  "Natural catastrophes and earthquakes are things caused by nature. Such chaos is natural, but we have to make sense of it somehow, and so we had to invent these stories. That is what I wanted to paint,” he states. 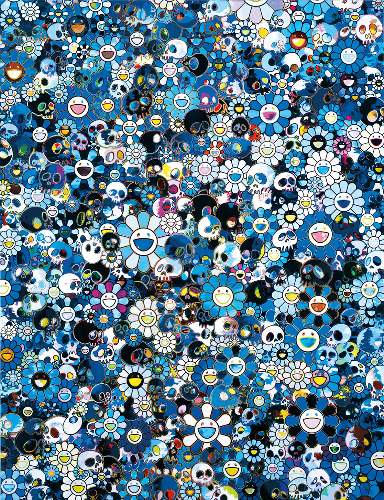 More recent works also have the sad flowers, even the ones with seemingly cheerful titles. 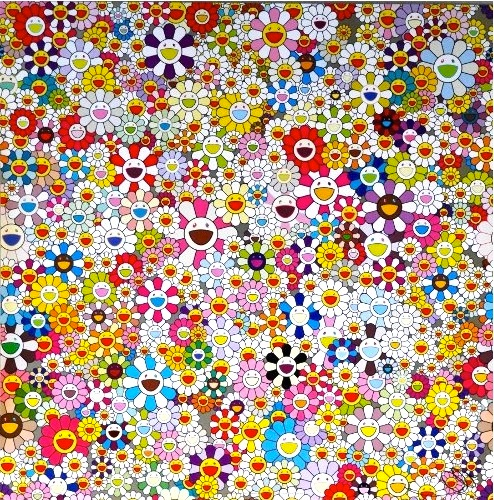 Detail (look below the blue flower on the bottom right): 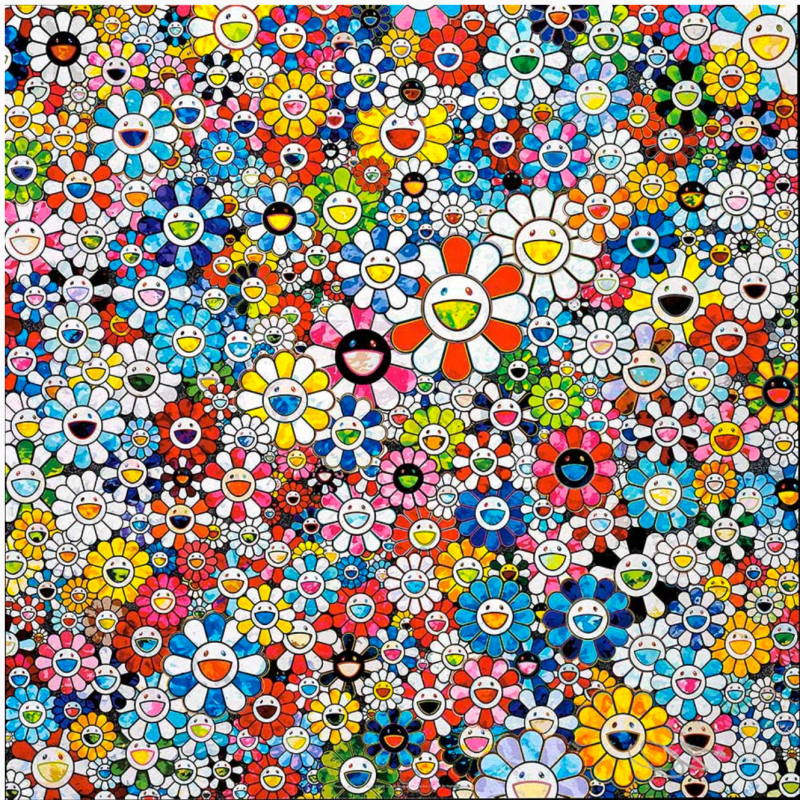 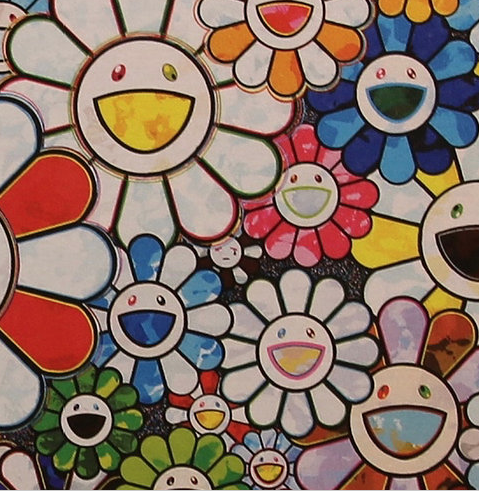 Even though sometimes the flowers aren't as bright and positive as they seem, I was pleased to see at least some explanation of their meaning for Murakami and the deeper ideas he's trying to express through them.  And there aren't any sad flowers in the Shu collection, so I think it was intended to be magical and optimistic, which is more appropriate for the holiday season.  Having said that, I would have liked to see an original flower piece for the Shu collection.  There are so many flower paintings I simply couldn't tell whether these particular flowers were borrowed from another work or if they were something new created just for the Shu collection, but it would have been nice to know.  Even though my cursory investigation yielded some answers, I'm still a little perplexed by the selection of flowers for this collection, especially after seeing the making of the video.

It's so elaborate - hiring dancers to "wrap" the city, a carefully thought-out nod to Murakami's background (he makes a cameo as a taxi driver, which was his father's occupation), and music selection - it seems like more work went into making the collection video than the packaging.  And going back to my previous statement that Murakami's flowers are his best-known motif, they really do appear everywhere, from cushions to key chains to sneakers.   There was even a pop-up cafe in Tokyo devoted to Murakami's flowers last year. 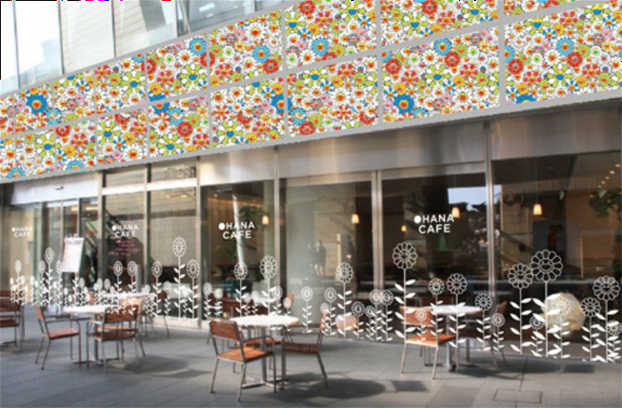 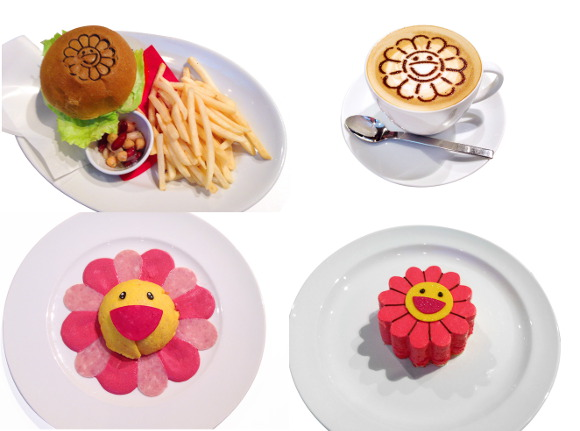 This year Murakami introduced his own line of flower-adorned sake, which will be served in the bar he owns in Tokyo. 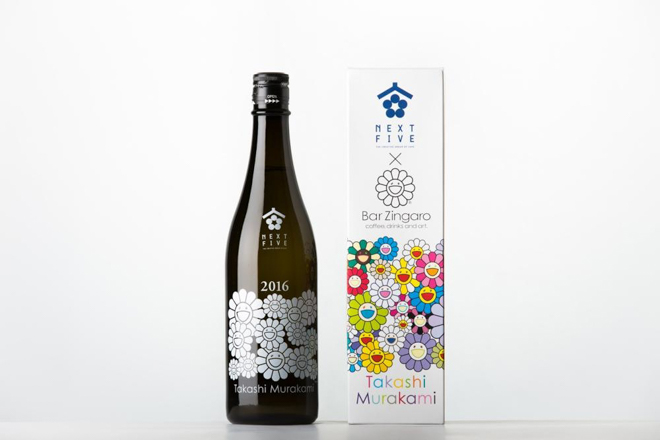 All of this is to say nothing of his long-time collaboration with Louis Vuitton, which, incidentally, featured a collection with the same name as the Shu palettes!  Cosmic Blossom debuted in 2010; both of this year's Shu palettes are also titled Cosmic Blossom.  My hunch about the packaging being somewhat uninspired seems correct in light of all this.  It seems like the company just decided to slap Murakami's most iconic symbol on there and call it a day, without protest from the artist.

I also can't help but wonder whether I agree with this 2007 take on the artist's business endeavors: "Unfortunately, since around 2001 Murakami has been so set on merging fine art with commercial product that by now all he’s doing is moving merch. The best that can be said about Murakami’s new work is that he’s making pretty money. Or pretty empty money. The main attractions of this exhibition are 50 little happy-faced flower paintings and six large portraits of a haggard-looking Zen patriarch. The flowers are insipid. So are the portraits, although at least with them Murakami is up to his old extreme stylization. But the real content of Murakami’s art is money and marketability. Hence, each of the 50 silly flowers reportedly goes for $90,000; the portraits, about $1.5 mil per unit. Four better larger flower paintings run about $450,000; two boring pictures of severed hands, about $400,000. Needless to say, the gallery reports everything is sold."  Ouch.  While I don't want to appear nearly as harsh, on the one hand, I'm sort of in agreement that Murakami just might be a bit of a sell-out at this point.  Having your key motif on commercial items is fine, but when it appears on so many things, it loses a little something - it just doesn't seem as special.  On the other hand, I admire any artist who also possesses this level of business acumen; in this day and age, it's basically expected that artists will embark on these sorts of partnerships.  I mean, I have an entire category of posts on makeup/artist collaborations!  And while I do think at times it's something of a cash grab, putting one's most recognizable work on merchandise isn't an entirely terrible or tasteless thing, as it ensures accessibility for those who can't afford the original.  I wouldn't mind having those little flower faces smiling at me from an original painting, but since I can't afford those, having them on makeup (or key chain, or whatever you prefer) is the next best thing.  It's the same concept as couture house makeup:  A tweed Chanel jacket is out of my financial reach, but I can buy a Chanel blush with a tweed pattern on it.  It's also a way to introduce one's work to an audience that might not necessarily be familiar with it otherwise. For the vast majority of artist collabs that I've covered, I can't say I've heard of the artist prior to their working with a makeup company and I really enjoy finding out about them this way.

So where does that leave me in terms of the Shu collection?  I guess the bottom line is that I think it's worthy of the Museum's collection since it does incorporate the artist's best-known work, but it's not the most inspired we've seen.  Especially not when compared to the previous Murakami collection, which, though it borrowed one of the artist's animated works, at least had a more original theme.  Perhaps if Murakami had created a unique flower design specifically for Shu I'd be more enthusiastic.