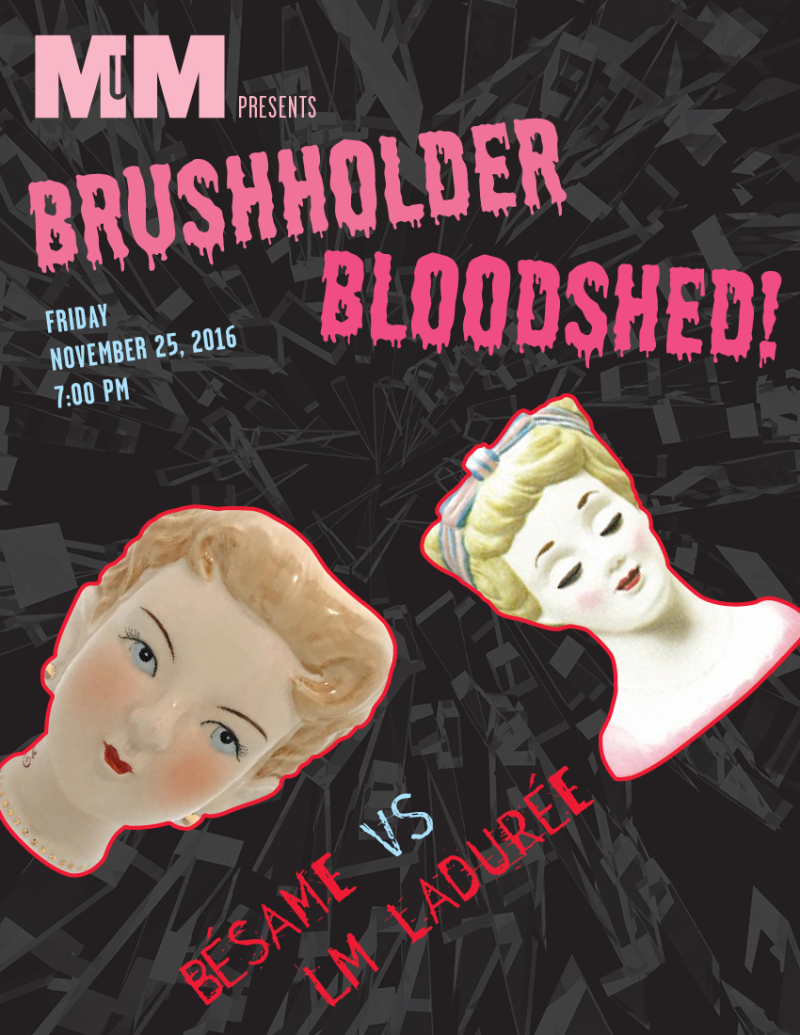 In the spirit of Black Friday, which we celebrate in the U.S. by trampling each other to score cheap TVs and the latest must-have children's toy, I thought I'd put these ladies in the ole MM boxing ring to duke it out.  I found it pretty interesting that two companies decided to release vintage-inspired brush holders for the holiday season.  At first glance, they don't seem so different - both are from similarly sized brands, blonde with perfect cherry-red pouts and dainty pearl necklaces, but as we'll see each have their own unique secret weapons. 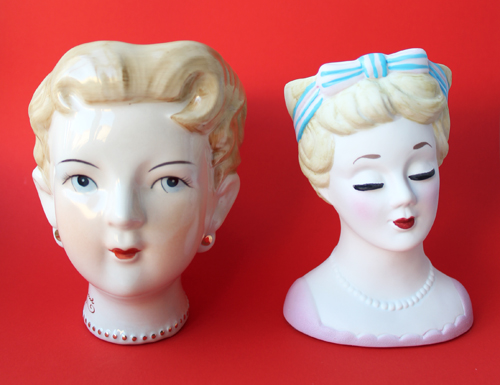 It's gonna be intense, so...let's get ready to rummmmbbbblllllle!  *ding ding* 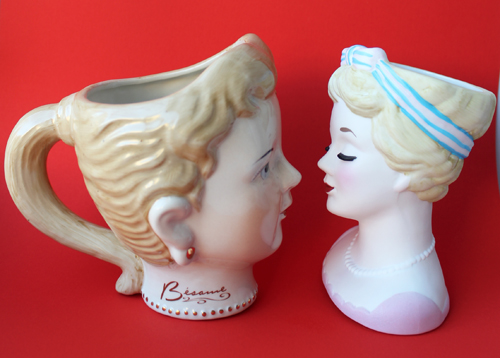 In one corner of the ring we have the Bésame brush holder.  With her bouncy ponytail that also acts as a handle and makeup straight from the 1940s, this girl packs a strong punch. Bésame is also available at Sephora, which could be seen as an advantage over her opponent. 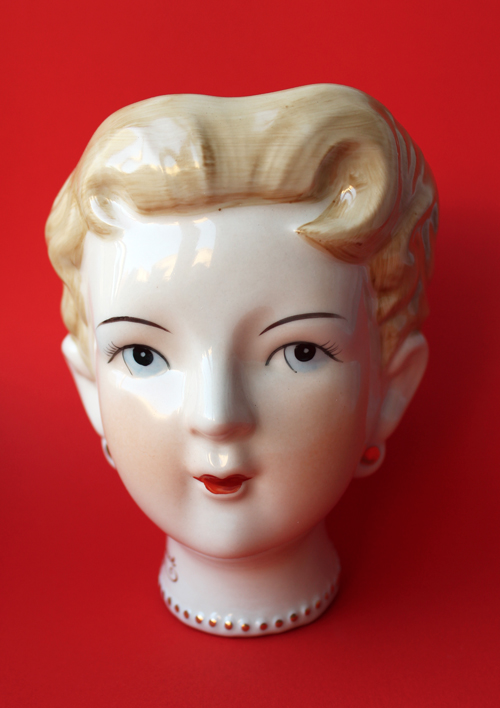 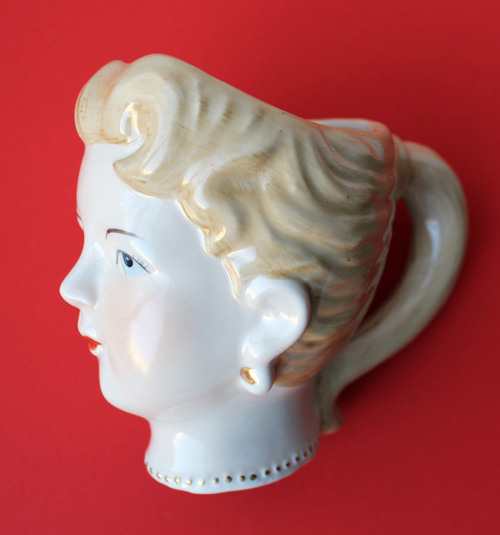 But LM Ladurée won't be pushed around so easily.  She boasts an equally jaunty hair style with a striped bow, but her thick black eyeliner proves she's not playing around.  Her eyes seem to be closed, making her face (in my opinion) less creepy than Bésame's somewhat lifeless stare.  LM Ladurée is only available in the U.S. through international sellers, making it more difficult to track down.  However, this could be also be an asset in that hard-to-find items can be seen as more special than readily available ones. 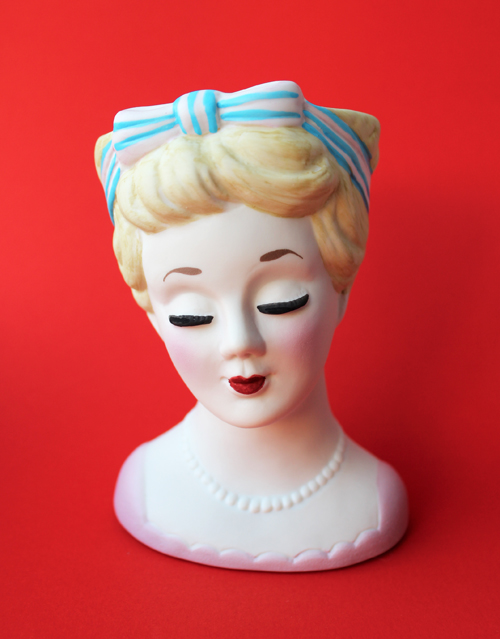 While both appear to be made from ceramic, there are significant differences:  Bésame's shine and heftier weight pits her directly against LM Ladurée's featherweight feel and matte finish.  Bésame may be bigger and stronger, but what LM Ladurée lacks in brawn she makes up for in agility. 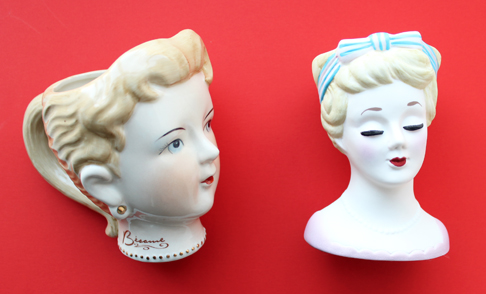 And while the size disparity doesn't seem that big at first, adding brushes is the true size test.  As you can see, Bésame edges out LM Ladurée in terms of storage space. 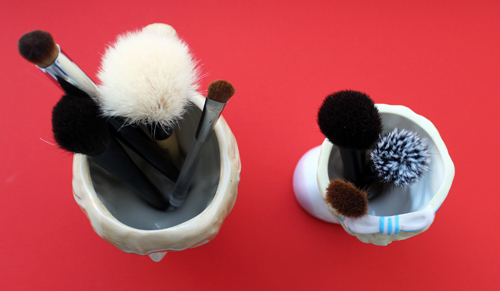 I predicted this was going to be a particularly intense smackdown, and I was right.  Things are getting ugly!  LM Ladurée has seized Bésame's ponytail and is ferociously yanking her head around.  Bésame swiftly retaliated by tearing off LM Ladurée's hair tie.  Well, as long as they're not going for their jewelry I guess it's fair game.  Oh, I take that back!  They have now ripped off each other's necklaces...I just hope LM Ladurée doesn't reach for Bésame's earrings.  Hoooooo boy!  Someone's gonna get KO'ed soon, so in these final moments, tell me who you think wins.  Will Bésame's larger size and ergonomic shape take down LM Ladurée?  Or will LM Ladurée's international status, more subtle matte finish and lightweight feel allow her to cleverly maneuver past Bésame's blows?